After reading the Persona 4 wikipedia article three times, I’m still confused. The PS2 game seems like a combination of a high school drama, police procedural, Silent Hill, and The Ring. Characters manifest Persona, or virtual manifestations of themselves, in an alternate “TV World” reality. It’s totally inscrutable to me.

Izanagi No Okami, I believe, is the protagonist’s ultimate Persona, a final-boss level bad-ass.

Please God somebody elaborate in the comments. I’m out of my depth on the interpretation of the source material.

D-Arts is Bandai’s high-end video game figure series. I’m not a big gamer, but the figures seem pretty solid and the Nagano-esque character design intrigued me. 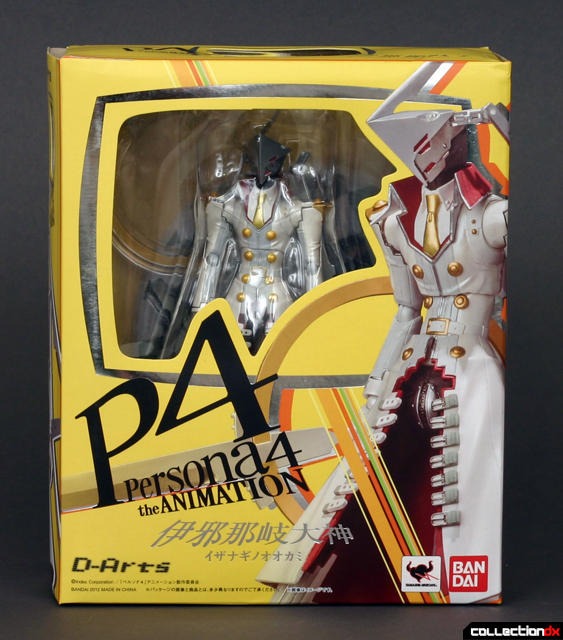 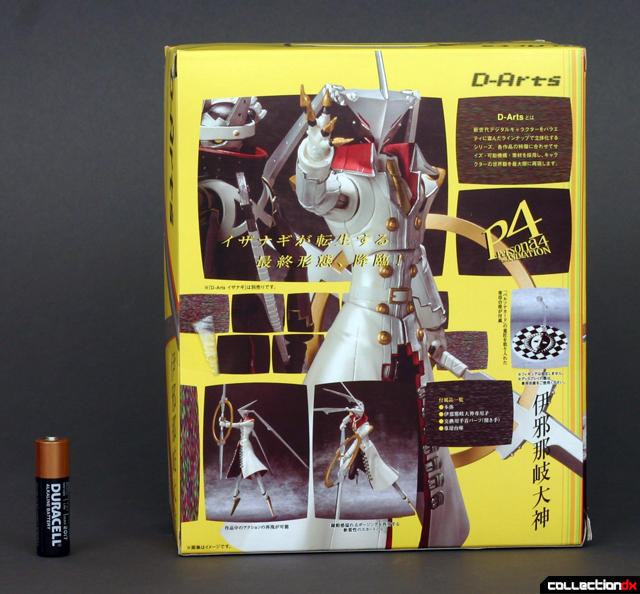 Inside, a two-tiered plastic clamshell. Also the base for the stand. Accessories include (4) variant hands, some blade-like attachments for his feet, and a large sword. 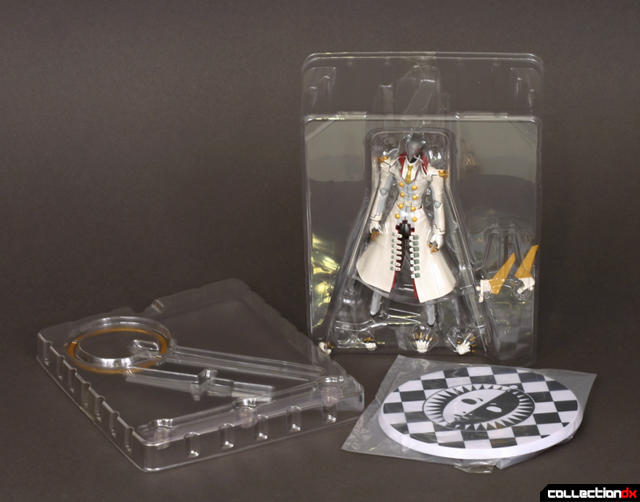 Out of the box, the figure is a respectable if unspectacular piece. One of the head-spike appendages was detached in the box, and the head came off immediately. Not great for a 50 dollar low-frills action figure. 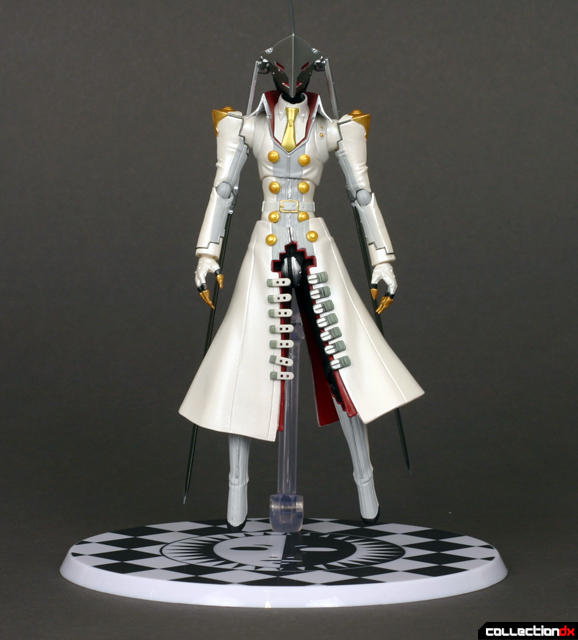 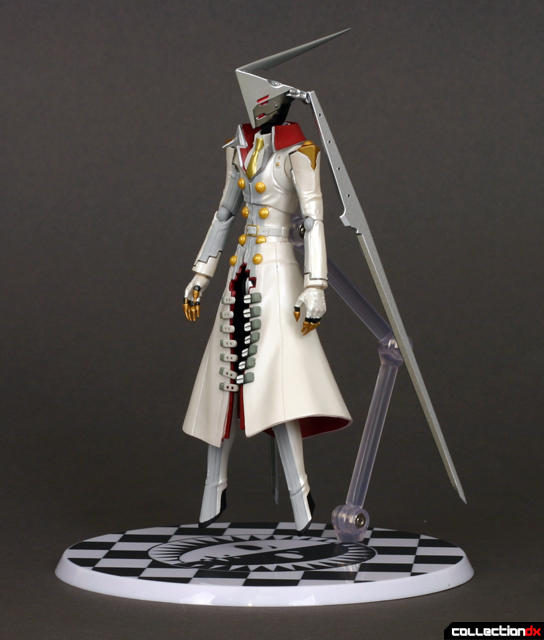 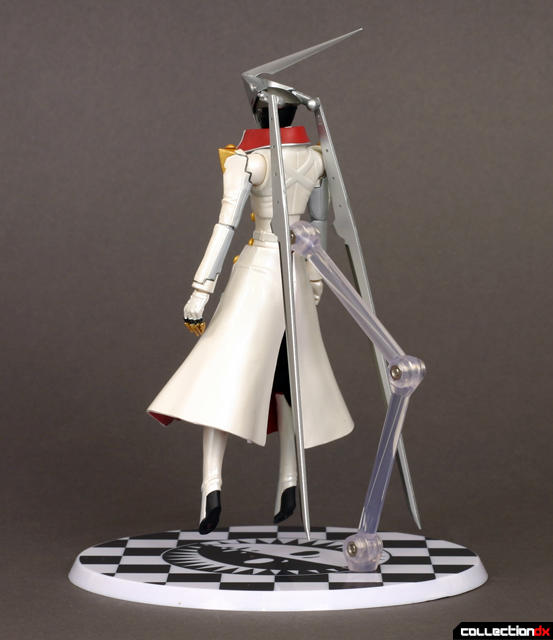 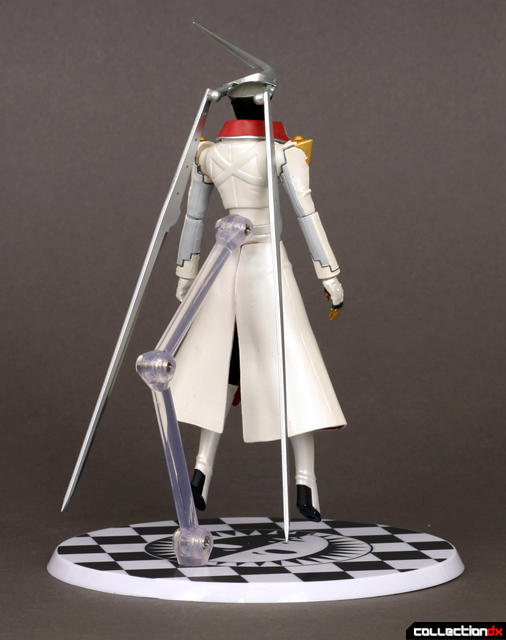 Izanagi is entirely dependent upon a stand. His pointy feet, even without the blade-attachments, are not intended to support his weight. So we have a permanently floaty figure. I’m a little bothered by the proliferation of such figures. Why design characters which must forever float with the assistance of a stand? Maybe one or two would be interesting, but enough already. A toy which requires a base to stand is not a toy, it is a statue.

So Izanagi floats very attractively. The fit and finish are nice. I like the high-quality opalescent paint on the coat. Paint apps are crisp. Little details like the coat buckles stud the sculpt. 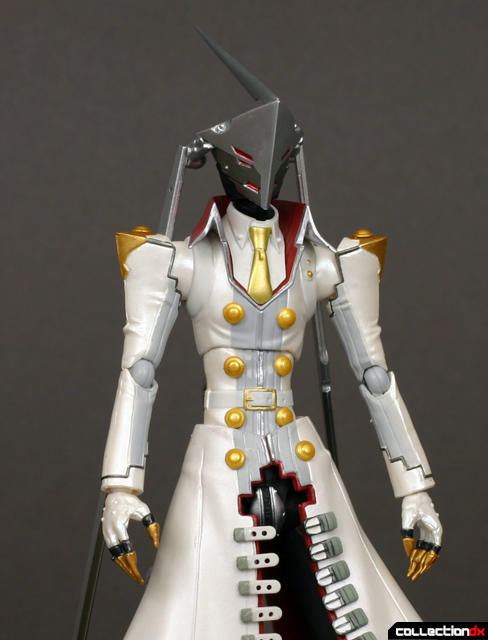 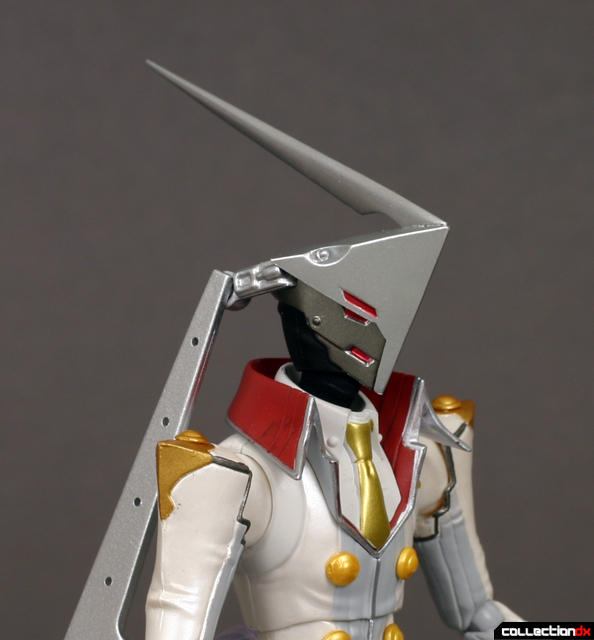 As I mentioned, what drew me to this figure was the Nagano-inspired design elements.The angular, elegant proportions are terrific. The addition of the foot-blades brings everything together. There is decent articulation in the arms and chest but the legs are largely immobilized by the soft rubber coat. And of course the floating limits the kinds of poses you can execute, creating a boring, samey quality to the positions. 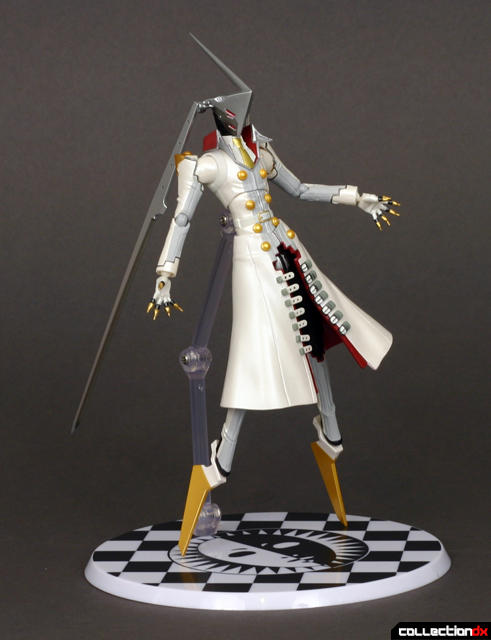 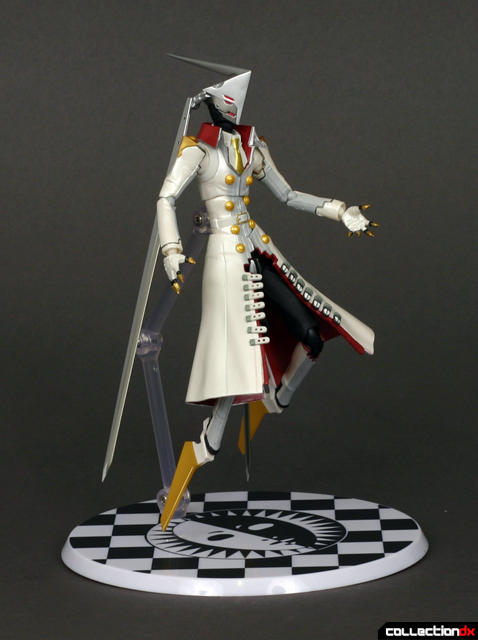 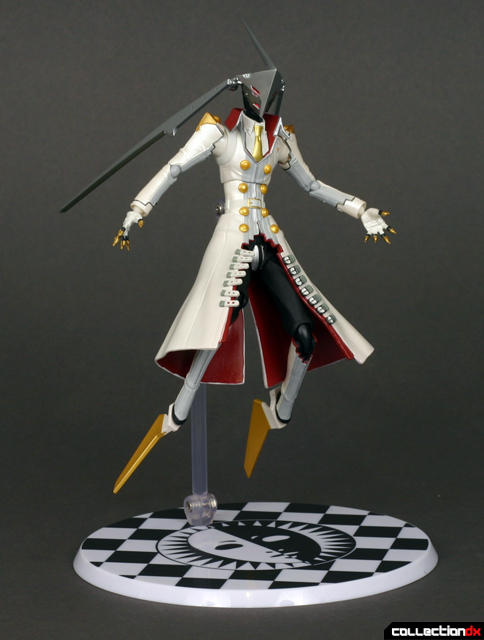 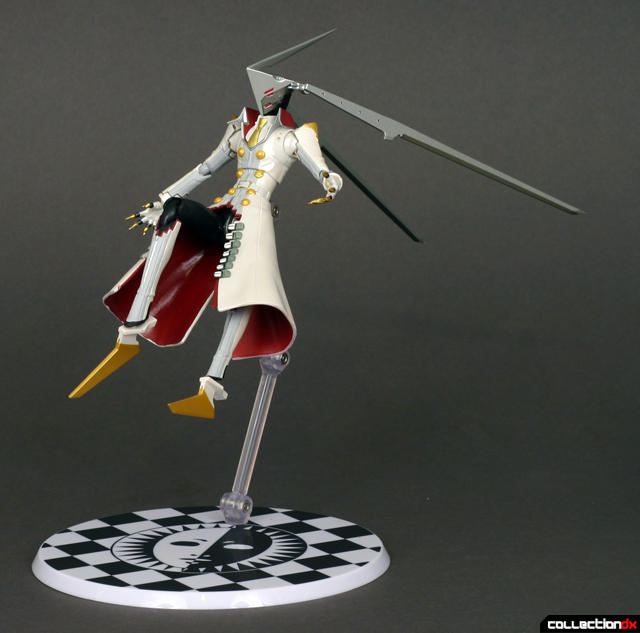 The giant sword is neat, though. 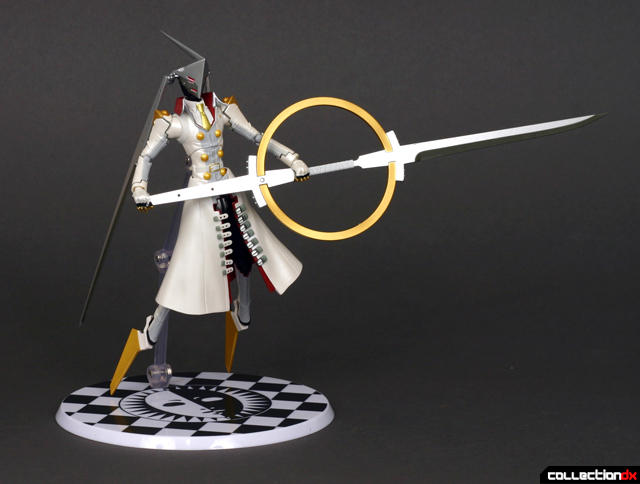 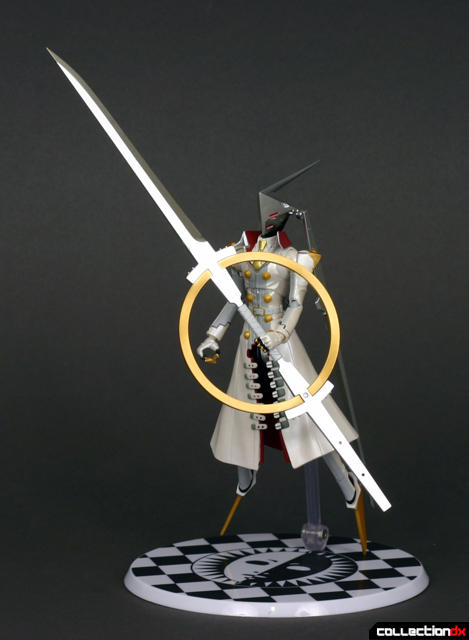 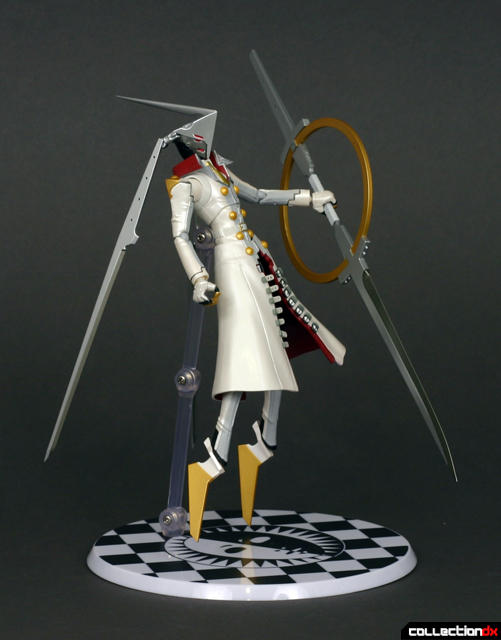 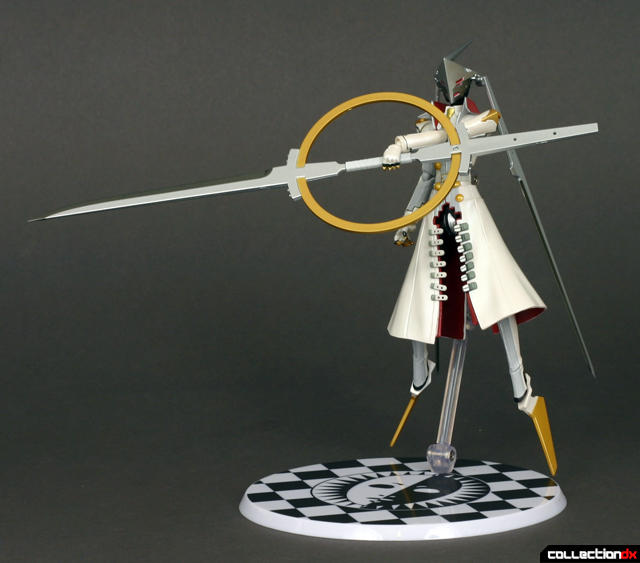 Maybe if I was better acquainted with the source material I’d be more excited. As is, this is a pretty underwhelming toy.

2 comments posted
we all float down here

"Why design characters which must forever float with the assistance of a stand?"

I'm pretty sure that when an artist is working on a design that's intended to end up as a 3d model in a video game, toy collectors are so far off his or her radar that we might as well not exist. After all, it's not as if video games depend on merchandise sales the way so many contemporary anime series do.

Actually, your summary of a Persona game is pretty good. The Persona series are 50% JRPG and 50% social sim. The western market... doesn't so much produce social sims, unless you count the companions in BioWare games. It's very much a peanut-butter-and-chocolate type of combination. It *shouldn't* work, but it does, and very well.

(Mind, I've only played Persona 3 FES, but I expect the tone of 4 is very similar. I'm patiently waiting for Persona 4 Golden to be released for the PS3 on PSN.)