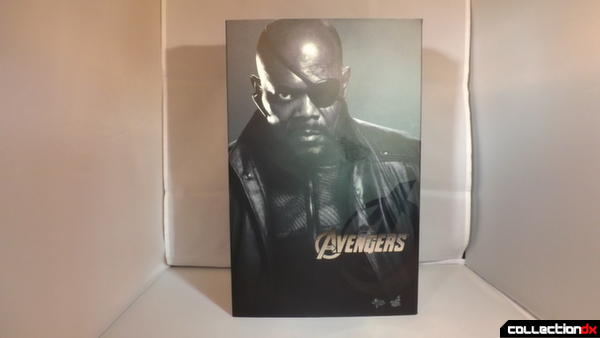 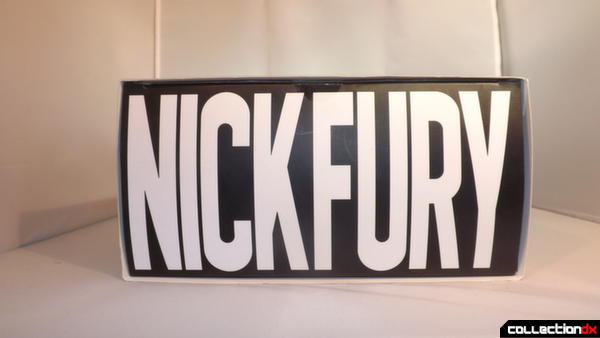 Who`s the man who gives superheroes a plan?
Nick!
Ya damn right!

Who is the guy who only has one working eye?
Nick!
Can you dig it?

Who`s the cat that won`t waste talk when there`s a God and Aliens attacking New York?
Nick!
Right on!

They say this cat Nick is a bad mother...
...Shut your mouth!
I`m talkin' bout Fury! 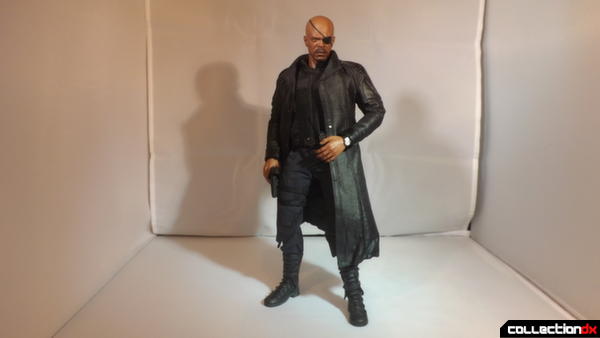 There`s a slight theme going here, if Hawkeye or Black Widow cameo in Agents of S.H.I.E.L.D. next week the theme will continue, and i want £10 from everyone reading this. 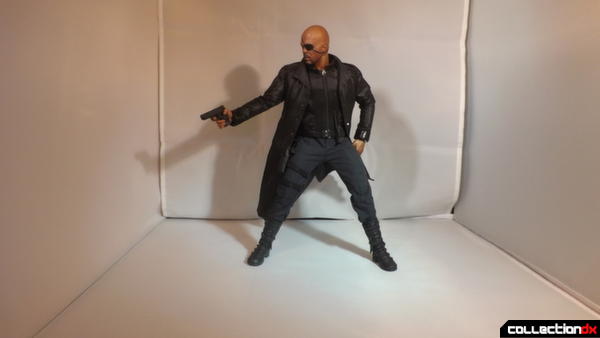 So Nick Fury, this figure came out around August 2012 and was the first proper release in the Avengers line (I`m excluding the Iron Man mark VI that was re-released as a limited edition). 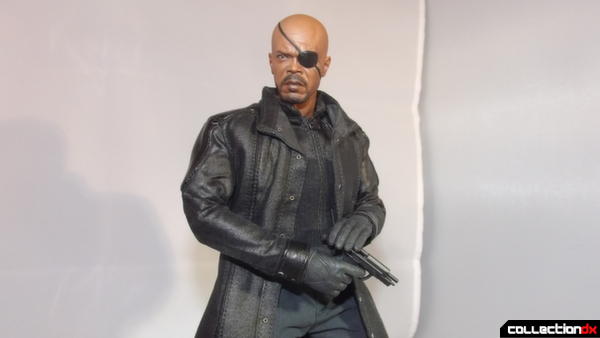 Fury has a wealth of accessories including the usual Hot Toys figure stand and instructions, also included are 5 gloved right hands, 3 gloved left hands, 2 sets of un-gloved left and right hands, the usual extra wrist pegs, walkie talkie, Bluetooth earpiece, wrist watch, handgun with removable clip (i have two handguns in my set and an MP5 machine gun i bought separately), a rocket launcher with removable rocket, and finally the Tesseract and briefcase with light up feature. 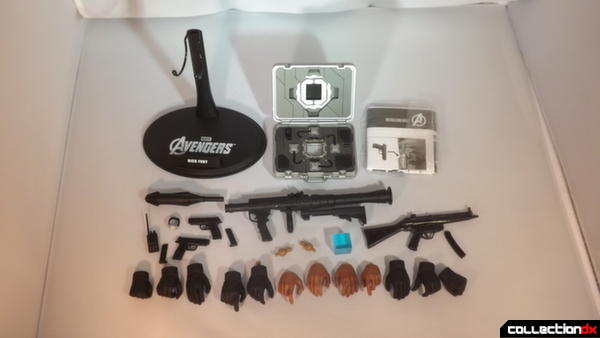 The handgun(s) feature a removable clip with painted bullet detail, the barrel can be pulled back on a spring to reveal a cocking or emptied clip look.

The rocket launcher has a posable stock at the back, the missile is held in the barrel by friction and has some detailed lettering on the side.

The watch has a detailed face but is non-posable or functioning, it just slides on Nick`s arm before you attach the hand. 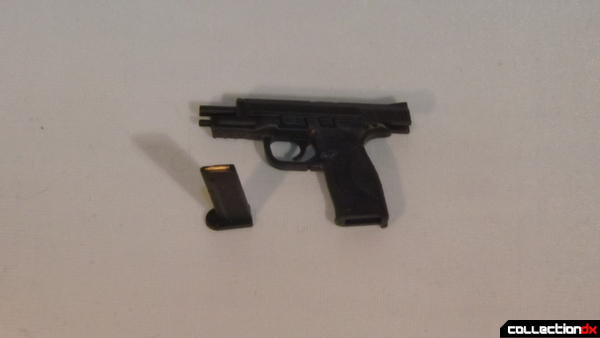 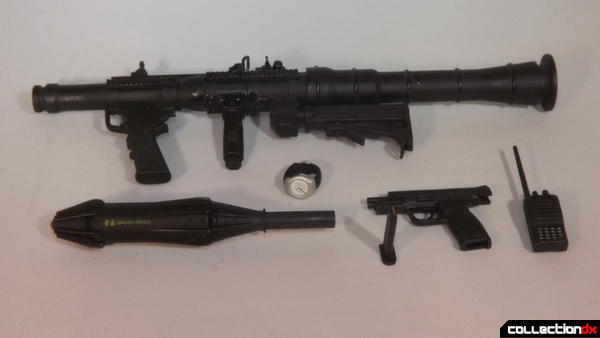 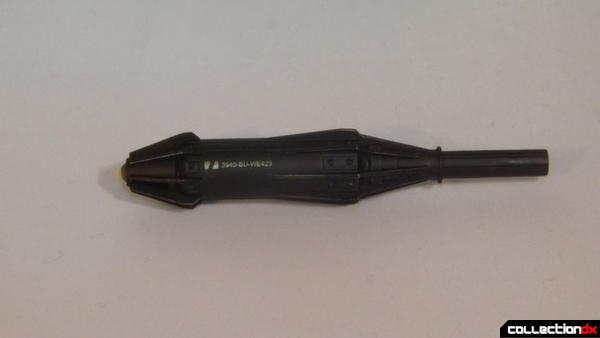 Nick can hold the rocket launcher quite easily with the right set of hands, i can`t quite get it to pose looking like he`s looking down the barrel, no matter how much I've tried to do this. 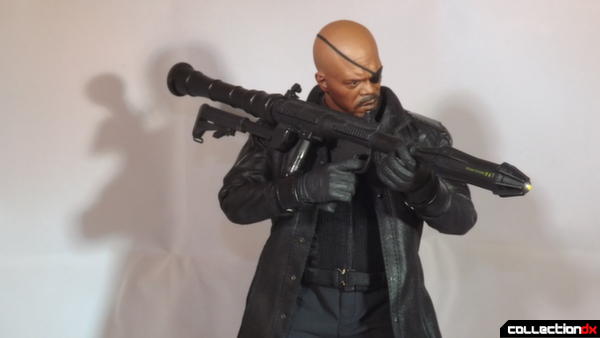 The figure comes with "trigger pulling hands" for both hands, with the extra handgun i bought i can pose Fury in a "man of action" pose, which is really what Nick Fury is.

On the right leg of the figure is a handgun holster that stores the gun when not in use, this holster can also be removed.

Articulation is reasonably good, as usual its the true type body and is only hindered by the clothing on the figure, i can get him into a good kneeling pose and flaring his coat out. 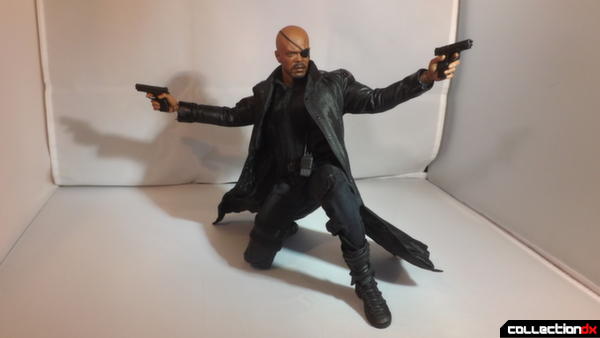 In each corner the wiring in the case lights up red, as does the numeric keypad on the lower right.
The case takes 3 small watch batteries (I'm not sure what kind they actually are), which are hidden in a removable panel on the upper right in the briefcase. 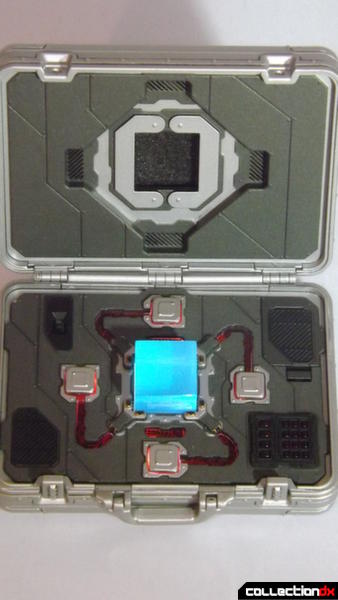 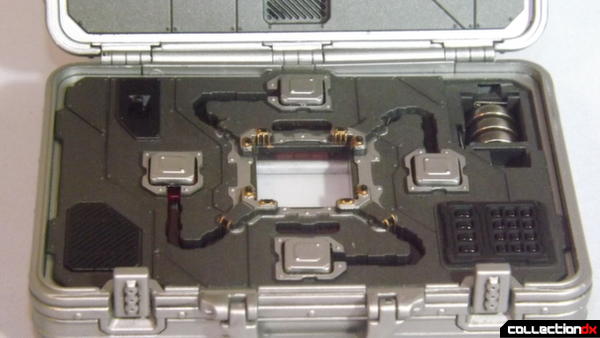 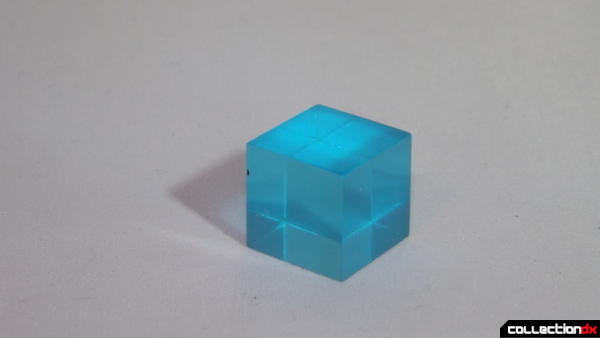 Fury can carry the Tesseract case in right or left hands, it is more of a balancing act than secure fit.
Certain hands are wide enough that you can place the Tesseract into Fury`s hand and have him hold it, this is much more secure as you wedge it between his fingers. 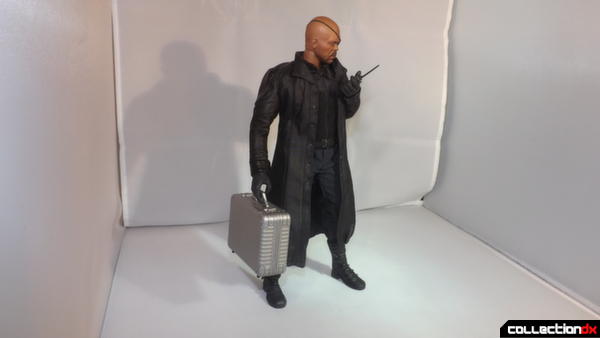 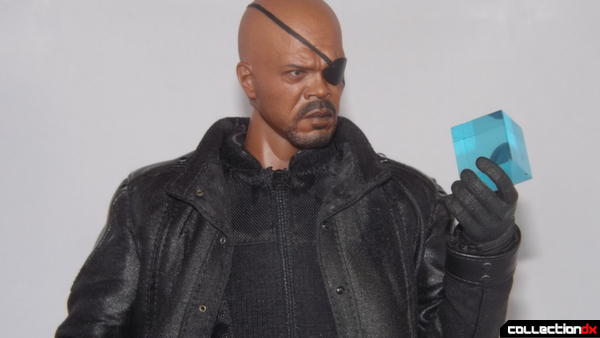 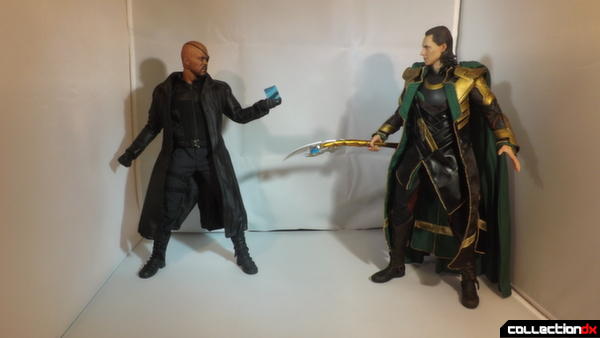 Taking the coat off the figure works in basically the same way it does for a real person, when it is removed the arm articulation increases greatly.

I think the jacket could be removed also, it has a working zip down the front, i wasn`t willing to do this for the review as it`d be a pain in the arse to get it back on. 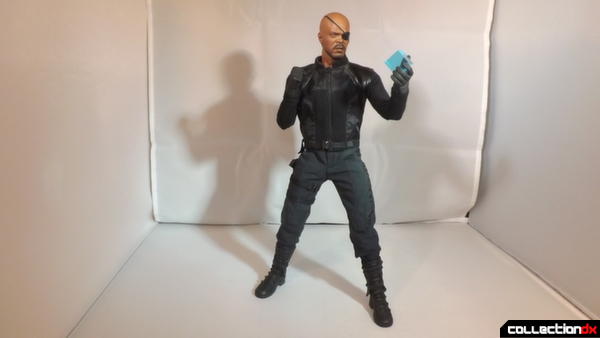 A quick detour, the MP5 Machine Gun i have in these pictures isn`t something that comes with the figure, i bought it from a guy in China who sells 1:6 scale figure accessories.

I felt my Nick Fury should have a Machine Gun being the "man of action" he is. 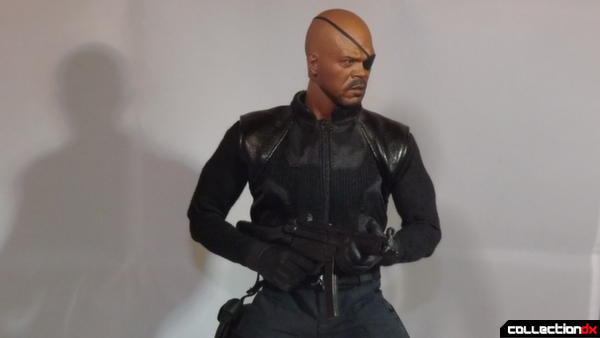 Fury can hold his walkie talkie and be posed with it close to his face, it can also be placed into his belt by a clip on the back of the walkie talkie, it has some nice detail on the numeric keypad. 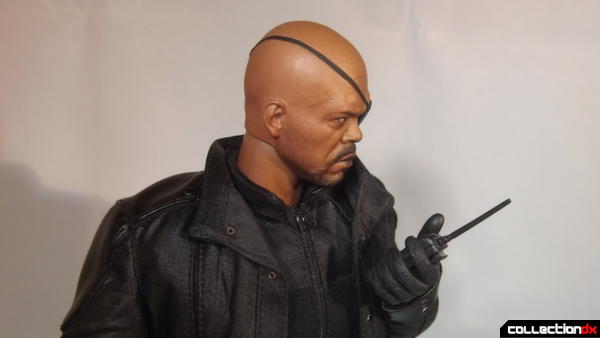 They have Sam Jackson dead on, the eye patch is sculpted into the head so is non-removable.

Under the patch is some nice scarring detail that matches the real life make up on Jackson.

You can see slight detail of veins and skin imperfections when you look closely enough. 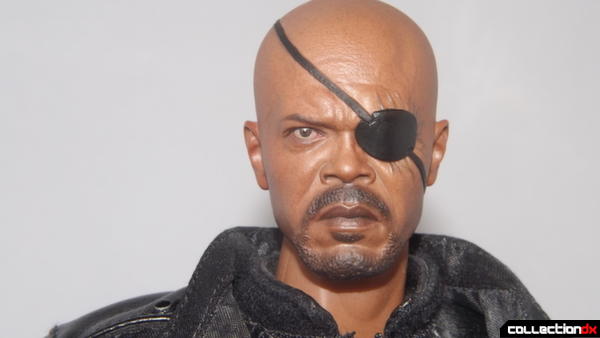 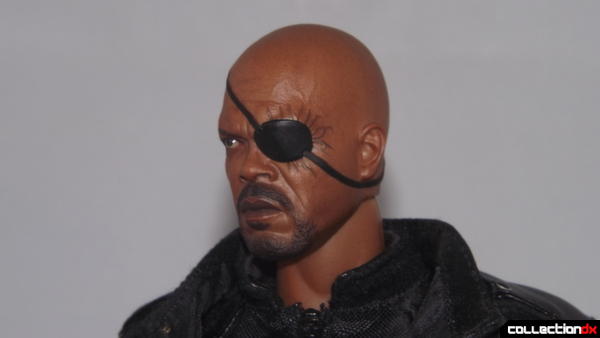 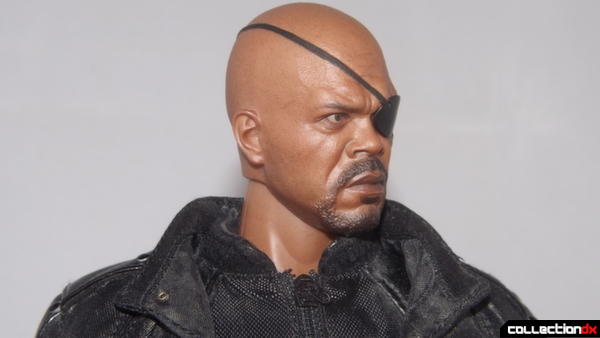 All in all, Fury is an awesome figure, perfect to round off an Avengers collection. 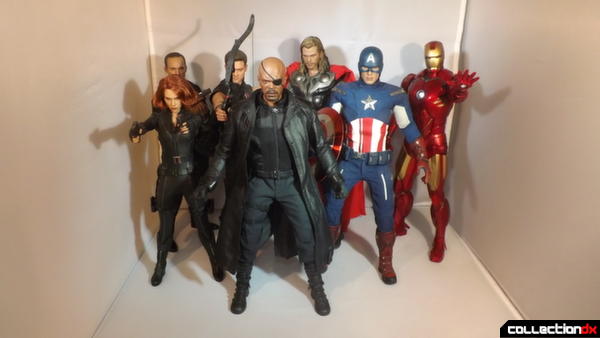 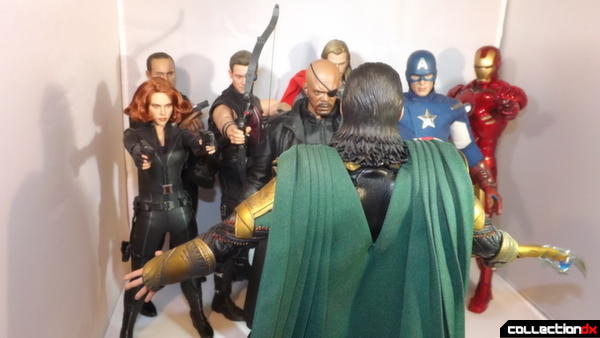 Now you just need The Hulk

if anyones interested in buying this figure get in contact with me, ill include everything you see in this review.
im in dire need of cash at the minute partly due to having to spend a small fortune repairing my laptop and owing money to my mum and flatmate.
ideally id like around £200 for the figure, i will post to anywhere in the world as long as the shipping is paid for by the buyer.

...eye patch is unremovable and theres scaring around that eye, otherwise you could also have yourself a Shaft figure or just a Samuel L Jackson figure for your Snakes on a Plane diorama lol

ps Tanuki ...put him up on ebay, he seems to be selling for around £200. I'm sure you have everything that came with him since you're a collector

Wishful thinking expecting £200 dabs PLUS postage costs. Folk are selling this figure £170 max including postage. Worth pushing it on the 1/6 FB pages that have recently been set up ;)