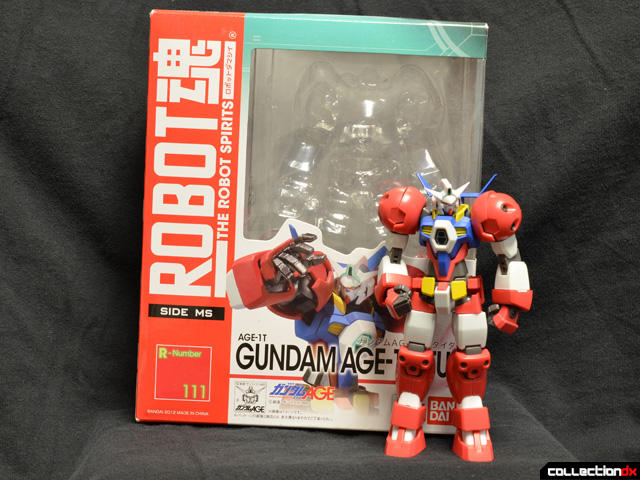 The Titus gear is designed by the AGE System to give Flit some extra power for engaging the UE up close and in gravity.  The Titus wear consists of heavy-duty arms and legs for the AGE-1 mobile suit.  Gundam AGE-1 Titus stands about five inches tall and is made from the usual Robot Spirits high-quality hard PVC, ABS, and POM.  The details are sharp and the figure is rugged. 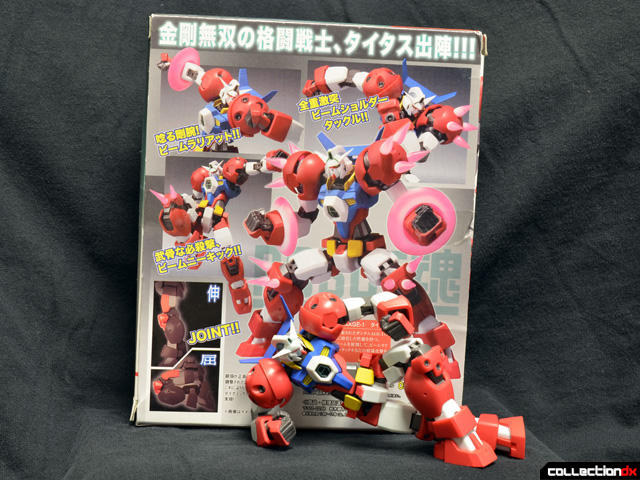 The box features colorful graphics and sharp photos.  My favorite part is the giant ‘JOINT!!’ 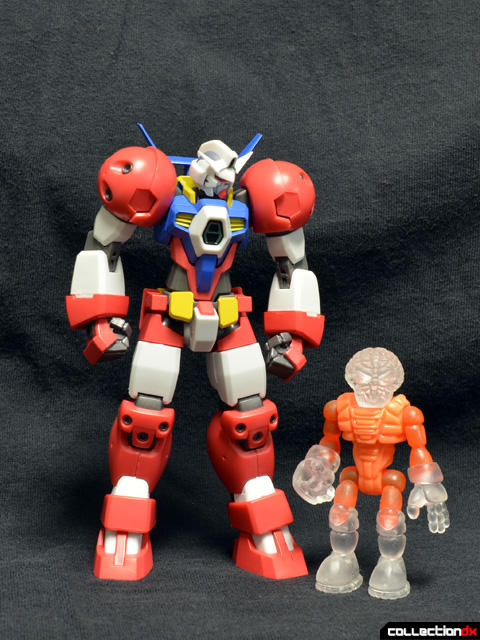 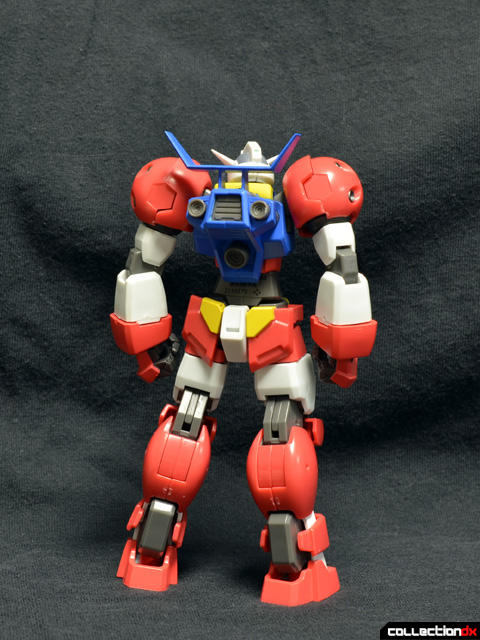 Standing next to a Glyos figure, you can get a sense for the size of Titus.  It is a chunky figure, but lean enough to still move. 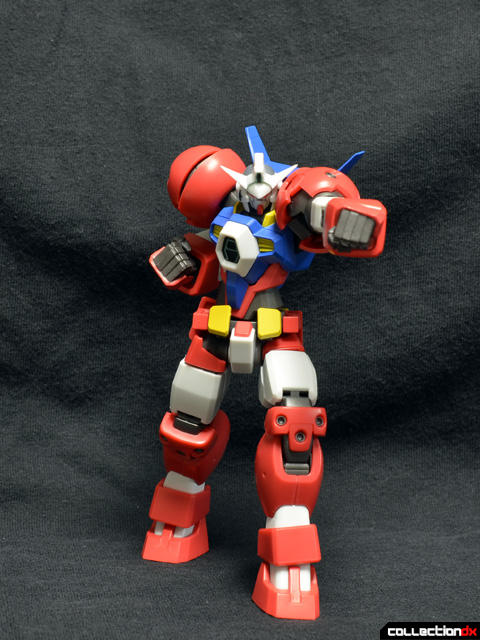 Articulation is the usual impressive Robot Spirits standard.  Everything that is supposed to move does.  The shoulder armor slides within itself for wide poses. 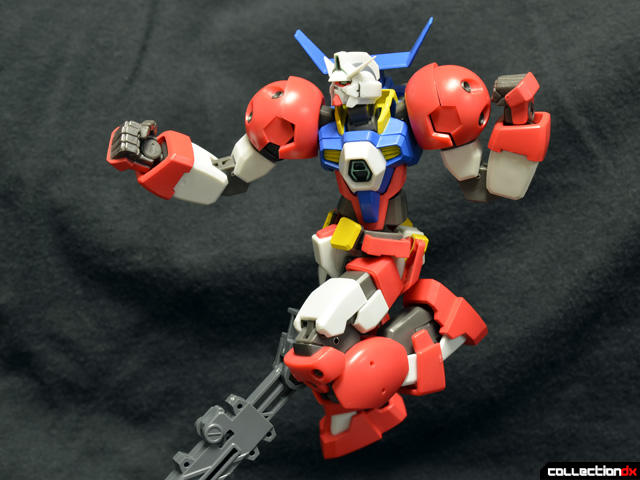 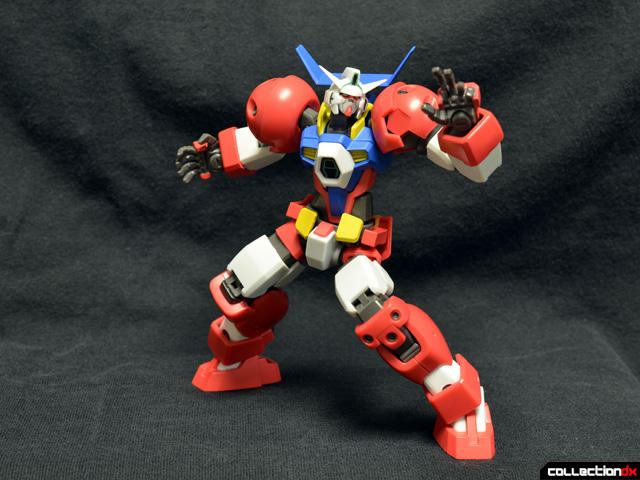 I love the sliding armor panels on the thighs.  That kind of detail is usually reserved for Master Grade or larger model kits.  Titus’s legs are made from many parts, with multiple points of movement to go from straight to fully bent and able to stand with feet flat on the ground in extreme poses.  I am a big proponent of ankle articulation, and the Titus does not disappoint. 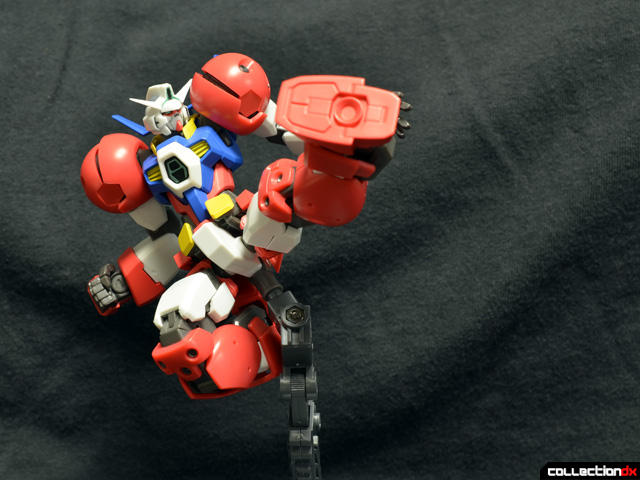 I finally have some Action Bases to use the included stand adaptor with.  The adaptor fits onto the peg end of the Action Base and clips onto grooves under the pelvis block.  It held the figure securely, but was a little loose on the stand, and then I accidentally broke the peg off the stand, so I switched back to one of the forked holders that come with the Action Base. 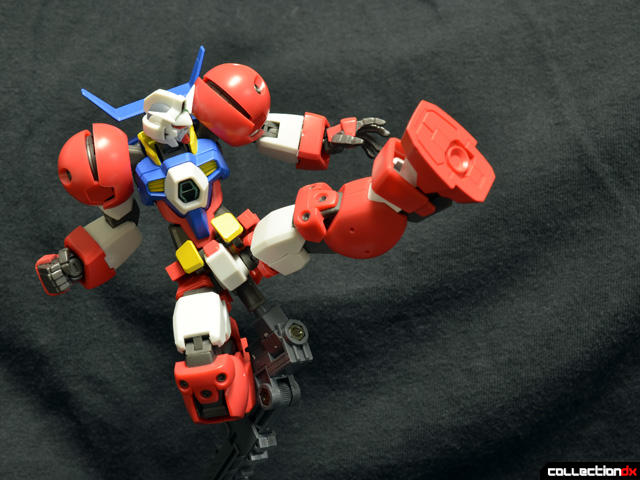 Titus can do a decent Rider Kick!  I was disappointed that the thruster detail in the soles of the feet is not painted, though. 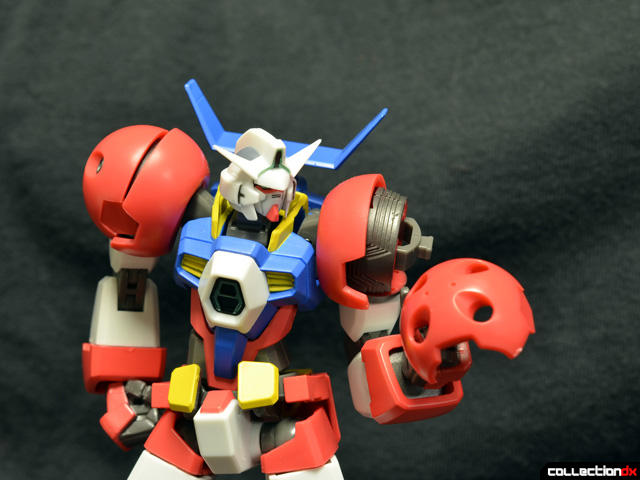 The Titus wear is designed to help the AGE-1 hurt things.  To that end, it is equipped with multiple beam emitters in the shoulders, forearms, and knees.  To represent this, Bandai has included a number of beam effect parts.  To install the shoulder beams, the outer shoulder armor comes off, and a ring containing the emitter detail comes out to make room for the beam parts.  Each spike is an individual part that pops securely into the holes on the shoulder. 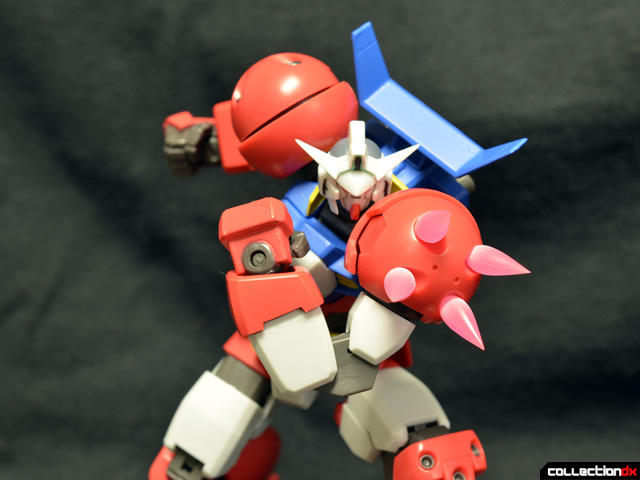 There is a light frosting effect painted on each beam part that really adds to the look.  The spikes are sharp, but soft enough that it would be tough to draw blood on them.  Tough, but not impossible. 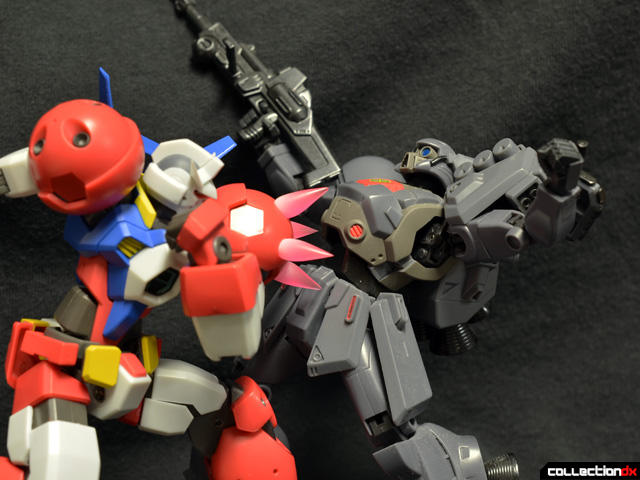 Titus is posable enough to deliver a powerful shoulder tackle! 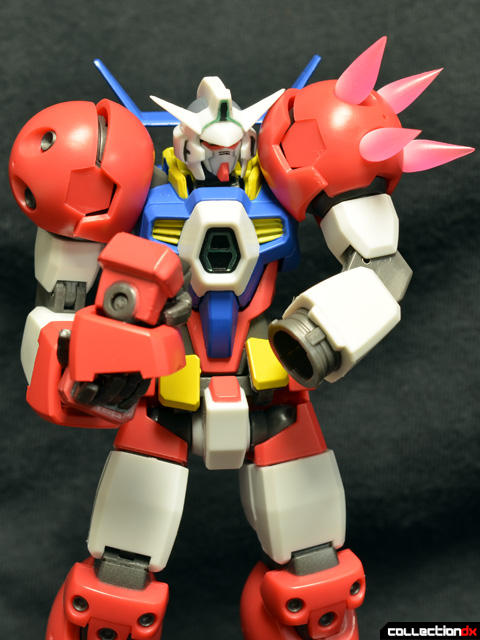 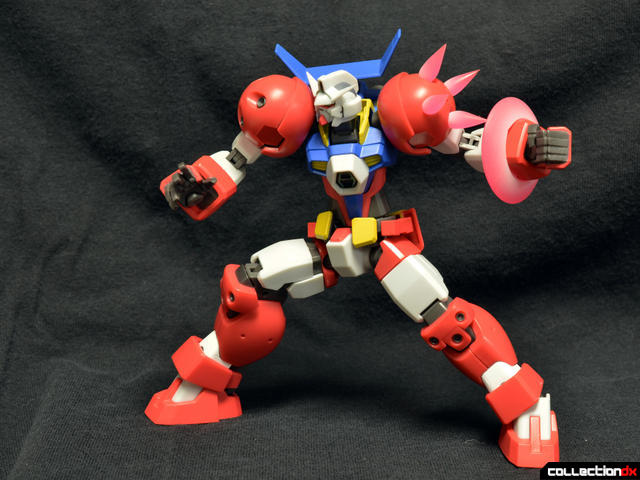 To install the wrist beam effects, the wrist assembly comes off.  The beam disc slides on, and then the forearm armor pops back on.  These parts look a little goofy, but are used to great effect in the show. 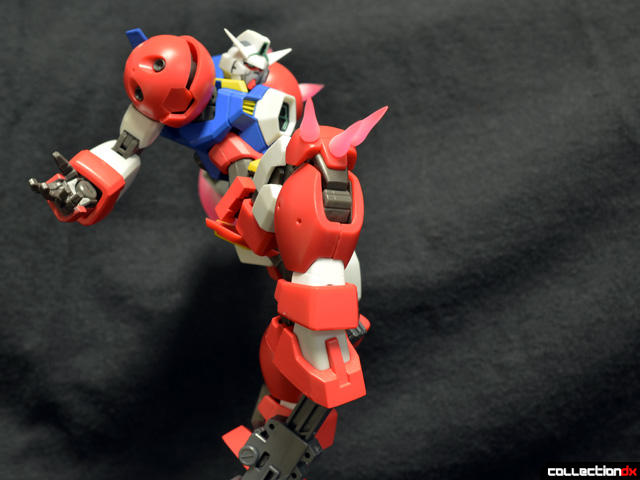 The final effect part is for the knees.  The knee armor is swappable for a part with the beams engaged.  I found these parts a little loose, but they do look good. 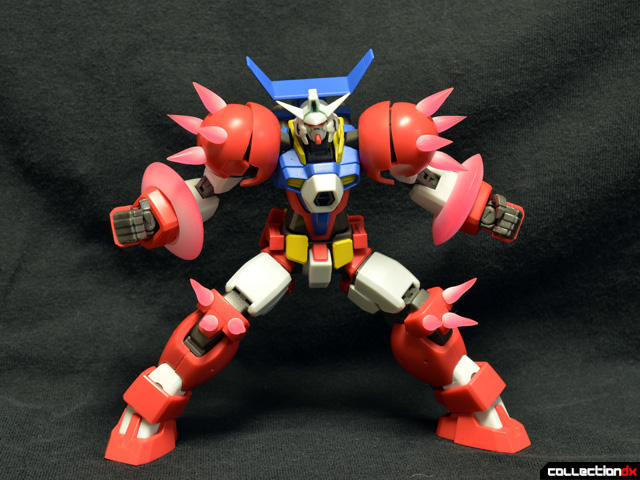 Fully beamed up, the Titus looks like a porcupine ready for action.  Aside from the knee armor, the parts all fit securely and the whole effect looks great.  When this guy comes at you, you know you’re in trouble. 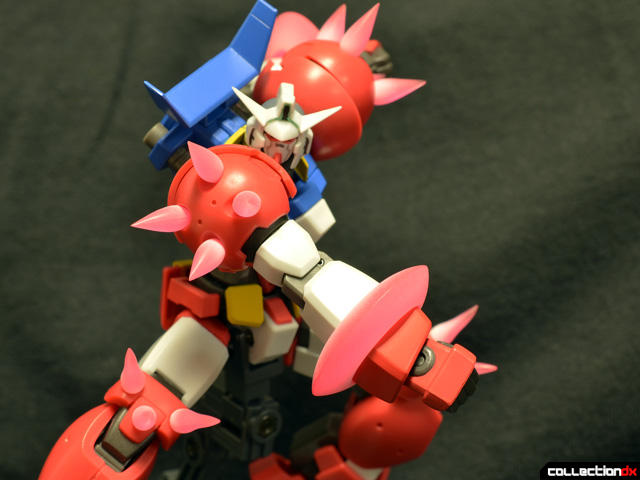 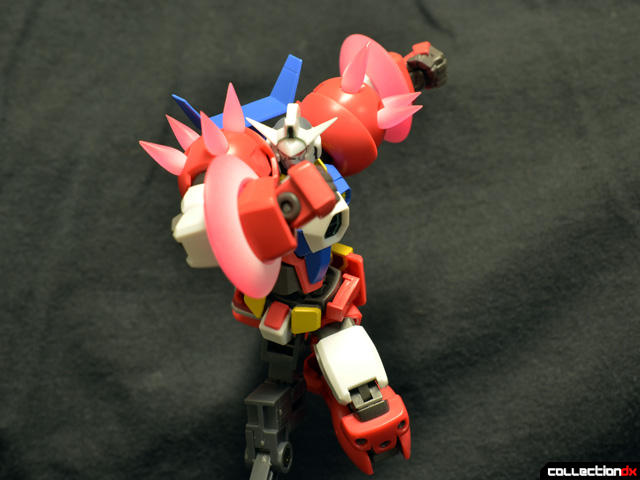 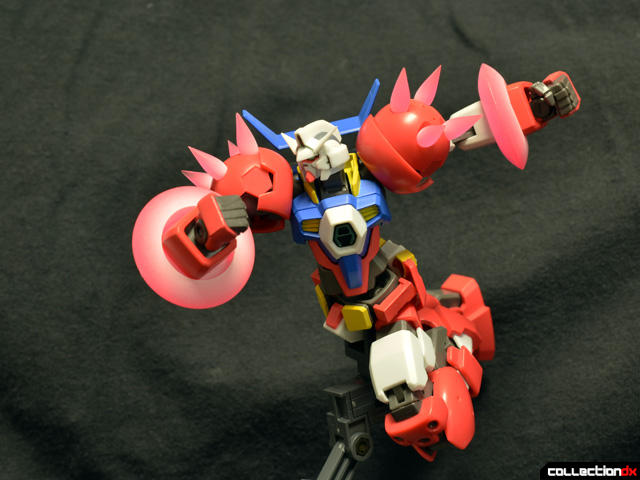 With or without a stand, Titus is fun to pose and looks ready to break some faces.  The sculpt captures the power Titus displays in the show while remaining lean enough to get into any pose needed. 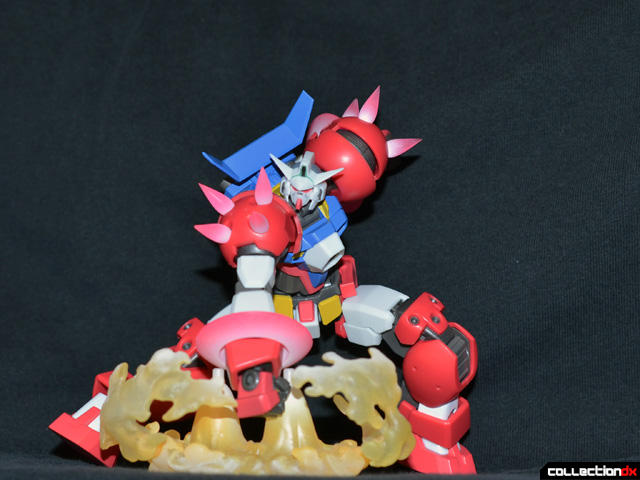 With effect parts from another figure, Titus delivers a thunderous ground pound! 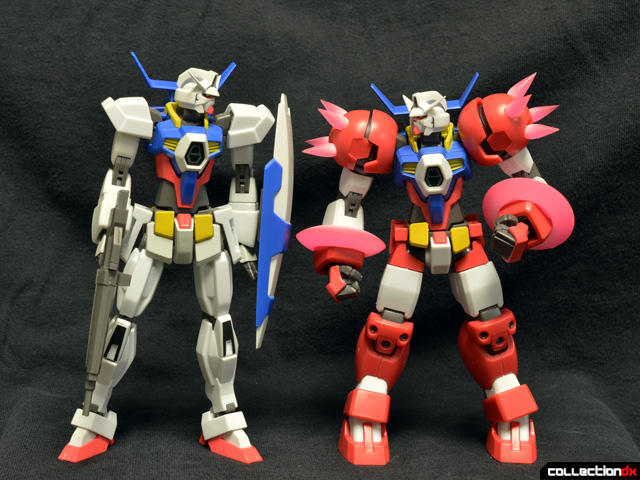 The Robot Spirits Gundam AGE figures feature swappable arms and waist/legs like in the show.  Next to the AGE-1 Normal, you can see that both figures actually feature a different torso sculpt as well.  The Normal torso has a pretty balanced sculpt, while the Titus torso is a little chunkier.  The final AGE-1 wear Robot Spirits, the Spallow, actually features a slimmer torso sculpt. 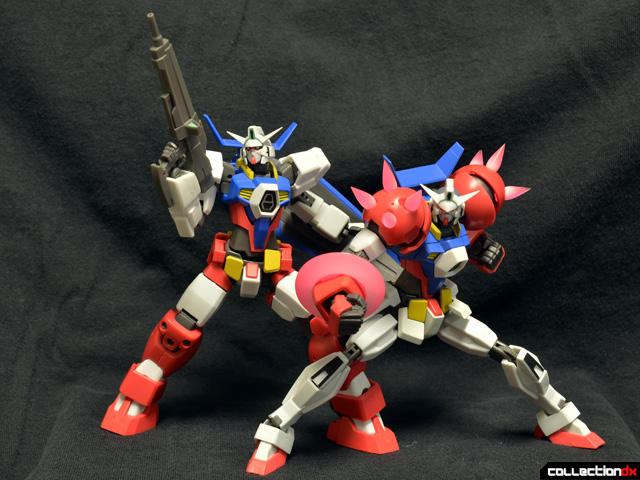 Mixing and matching parts makes for some bizarre and ungainly mobile suits.  That said, I like the combination of the Titus arms and Normal legs.  It makes for a mobile suit that looks like it could close the gap quickly and then deliver some serious punishment. 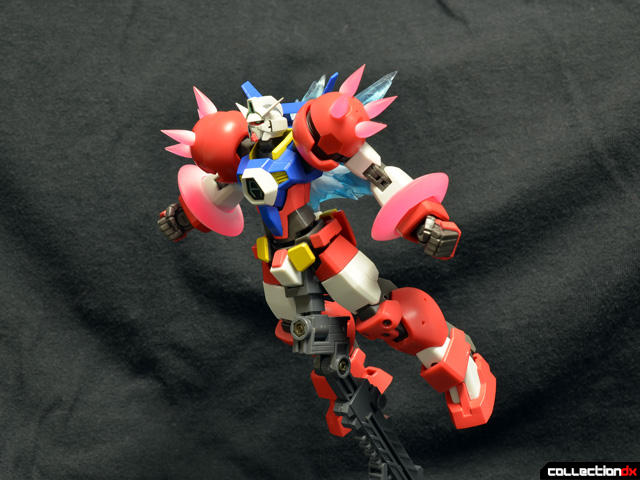 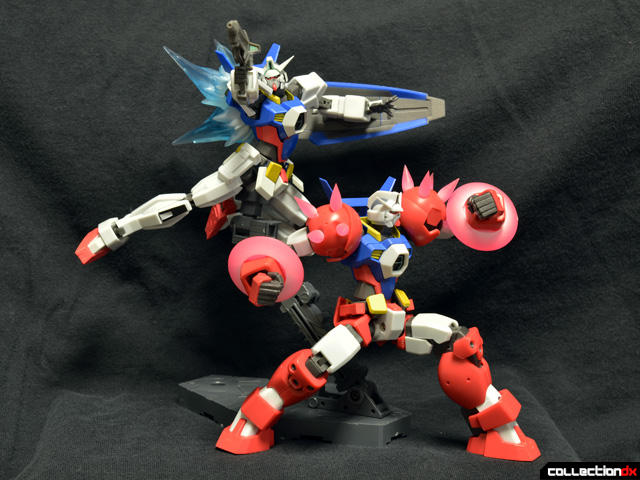 Gundam AGE-1 Normal and Titus look great together.  I cannot wait to pick up the Spallow to complete the set. 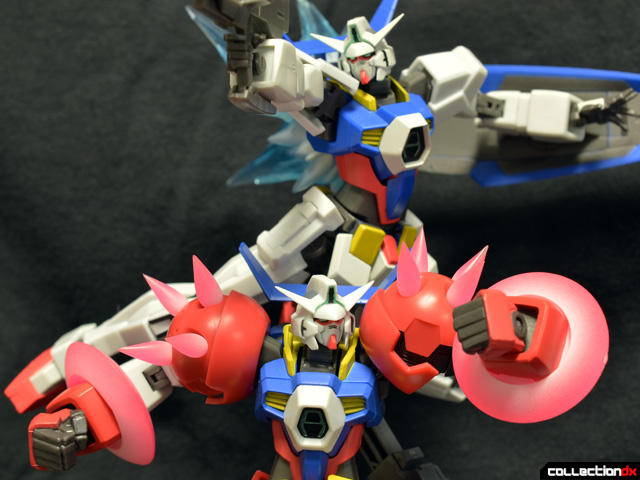 You can pick up your Robot Spirits AGE-1 Titus for around $40 on Big Bad Toy Store, and I think it’s worth it.  The molding and paint is beautiful, and the figure is a blast to play with, like a good toy should be.  The addition of some fun mecha detail and the effect parts makes for an almost cinematic display piece.  Titus looks good beating the snot out of whatever you pit it against!

This thing looks like a load of fun with how chunky he is.

It's time to try mixing-build of Madoka + Age-1 Titus, again! Great review and excellent poses. Appreciate your insight on the figure; going to pick one up.

... these Gundams look anorexic to me. In "action" poses they don't look too bad, but standing in museum poses that torso just doesn't look right.

Titus doesn't look much bigger, he looks like they took AGE-Normal and put him in Goalie Hockey gear.

When you watch Titus in the anime, he is wearing hulking hunks of metal --- and to any bad guy looking at Titus coming towards him .... it just screams " I'm gonna hurt you... bbbbbbbad"

Titus here doesn't look intimidating enough, he looks like he should be on American Gladiators.

I hope AGE- fortress will look like a Gundam Mobile Moving Fortress... and not something like AGE- Gundam lazyboy recliner.

DON'T GET ME WRONG... I love the other Gundam Bandai Robot Spirits figures, just not the AGE stuff so far

Can't say how elongated the torso is on this RS Titus, but aside from the toy I like the review, detailed with great pictures, just what I need :)