Since the excellent Zombie Trooper re-awakened my dormant love for G.I. Joe, I’ve been working my way through the back catalog to see what I’ve missed. I immediately ran smack into a transforming ride armor, of all things. The Cycle Armor was just released as a Ross (wha?) exclusive, though the box is dated 2010 and was supposed to be on shelves last year.

I was elated to discover this thing. The G.I. Joe universe has featured mecha in some form or another since the ponderous S.N.A.K.E. armor from the Real American Heroes line, though typically as blocky American-style military walkers. This is something entirely different, a thoroughly Japanese design. 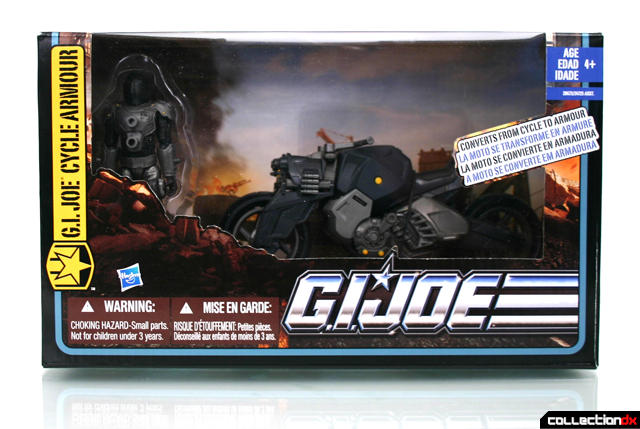 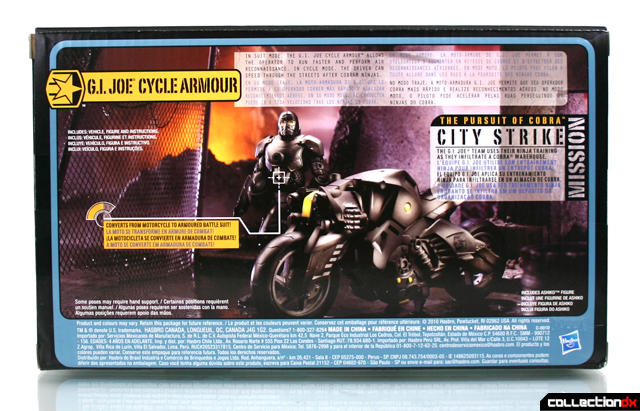 The driver/pilot, the box tells me, is Ashiiko, a ninja. He’s a somewhat bland modern Joe figure with subdued finished. All of the ports give him a real microman flavor. 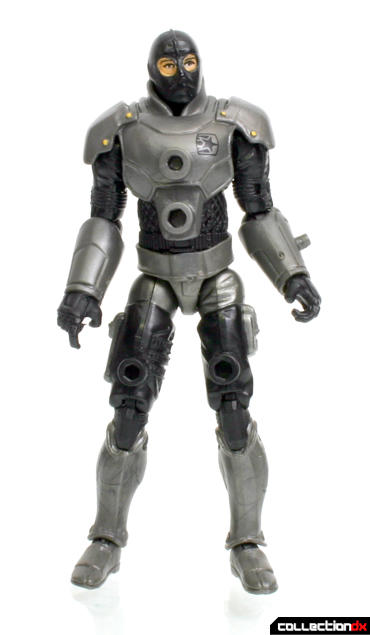 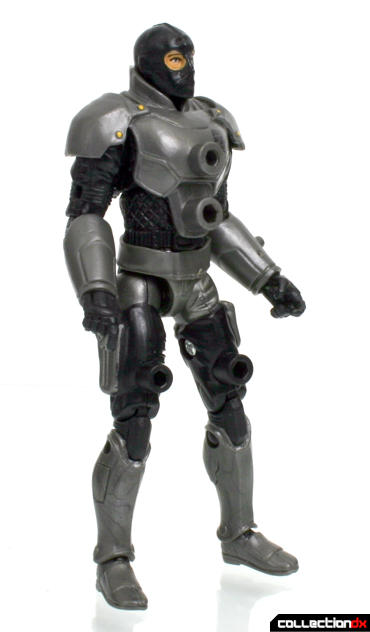 Ashiko comes with an arbitrary handful of rubber weapons. 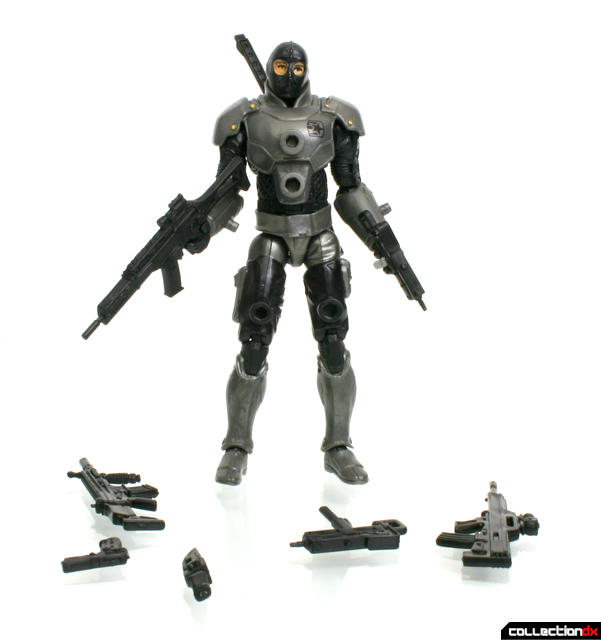 Articulation is limited by his armor, but it’s still decent. The figure is fine, but it’s the least interesting thing about this set. 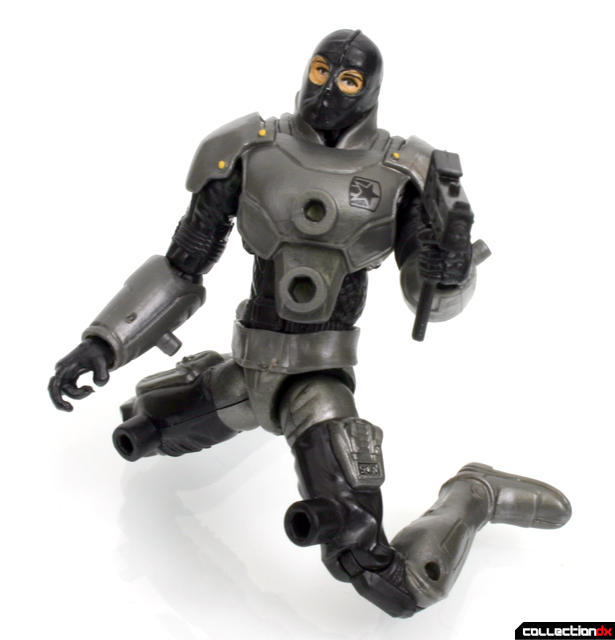 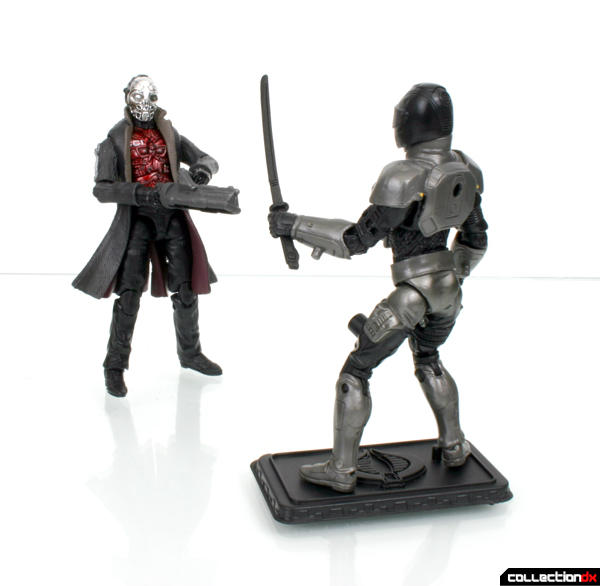 The motorcycle, however, is anything but boring. The aggressive styling and matte finishes make for a dynamic vehicle. It is very pretty. 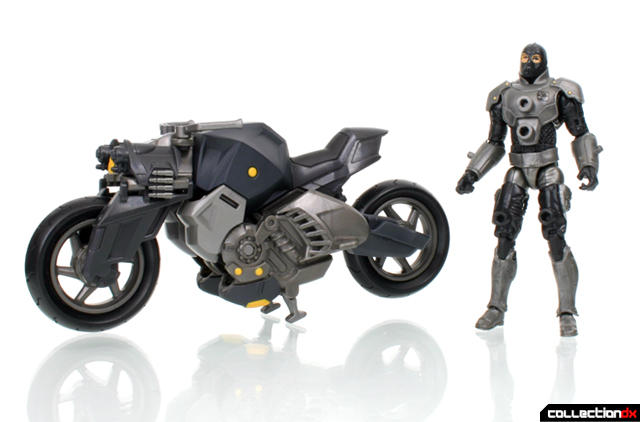 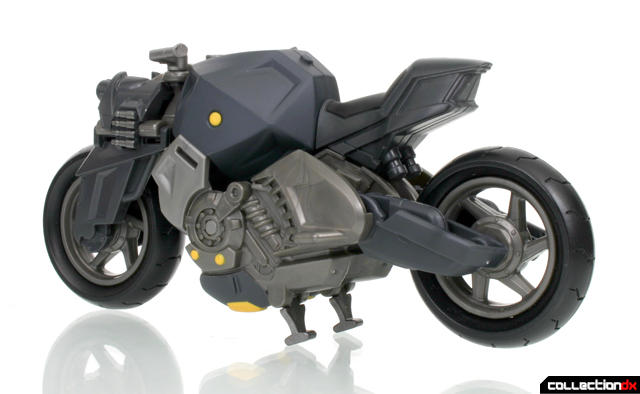 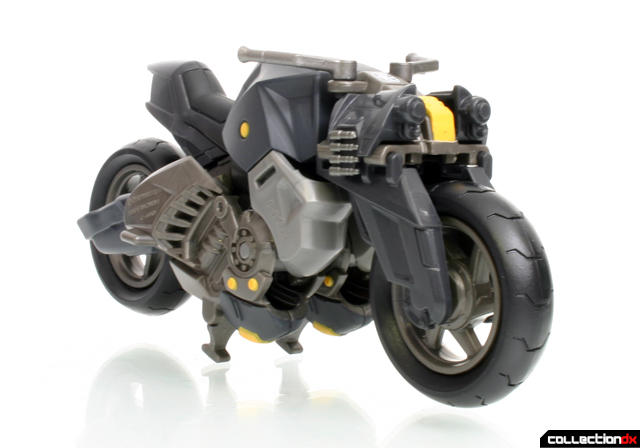 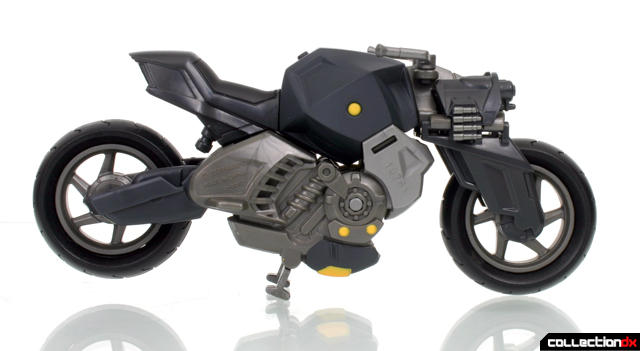 As you would expect, Ashiko can ride the motorcycle, but awkwardly. I am still amazed that modern toy technology is incapable of creating an action figure which can convincingly ride a motorcycle. Even the highest-end collector toys struggle with this (e.g. Masterpiece Cyclone). 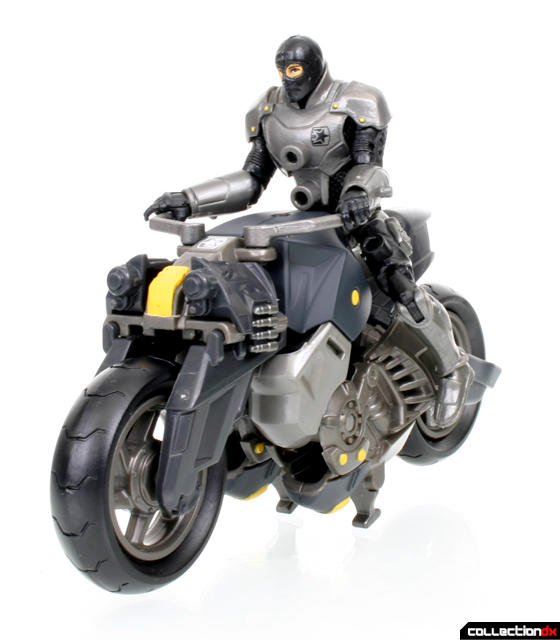 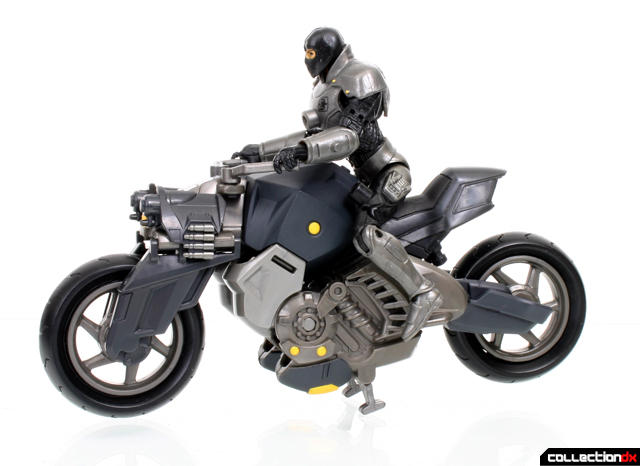 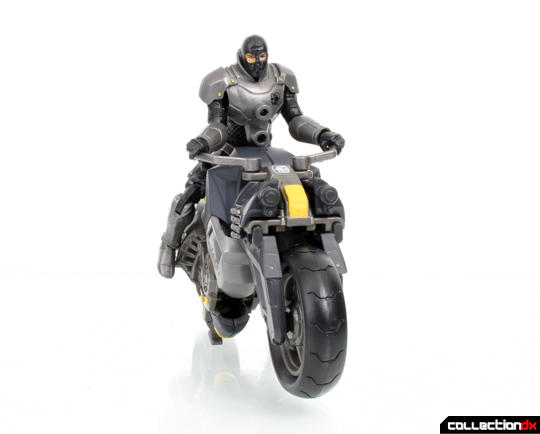 So he looks goofy on the back of his hog. No matter, let’s get this thing going.

Transformation, or rearrangement rather, into armor mode is not an intuitive process. The bike comes apart into a dozen pieces. 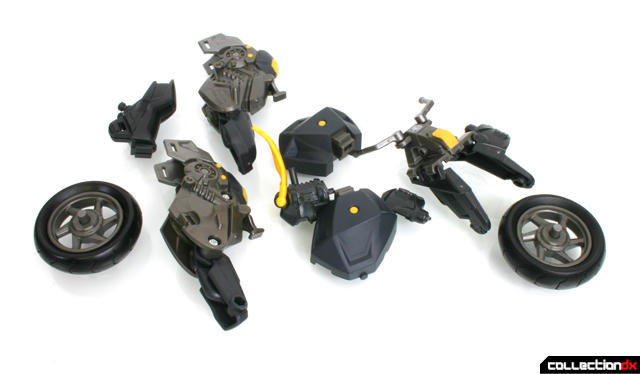 These pieces are built up into super boots, arm attachments, a backpack, and chest piece. 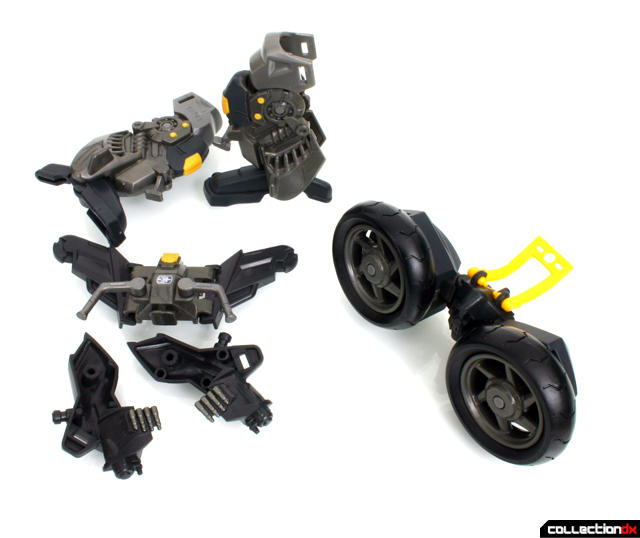 Most parts fit sturdily into the ports in his chest,legs, and back. Once you’ve put his boots on, articulation is out of the question. You see that splayed stance? That’s it, as far as standing goes. Though he can do the splits as well, and will frequently do so on a glass surface. 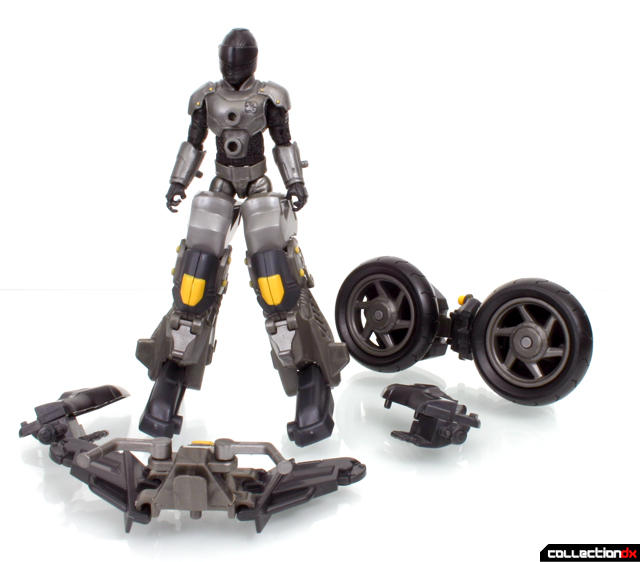 There’s a nice yellow rubber cowl piece which connects the backpack and chest cover. The arm pieces attach to a peg on his rubber gauntlets. 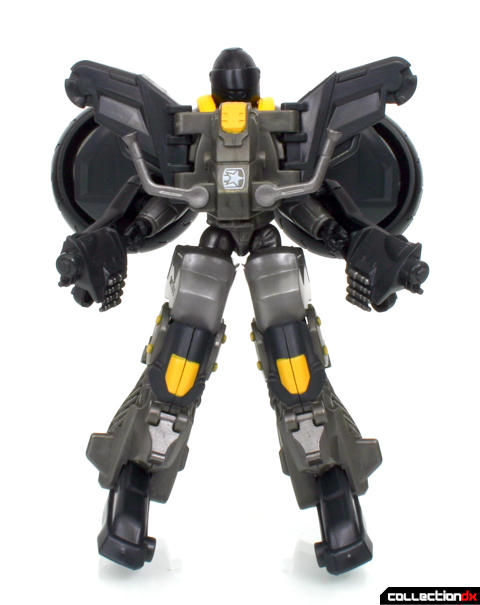 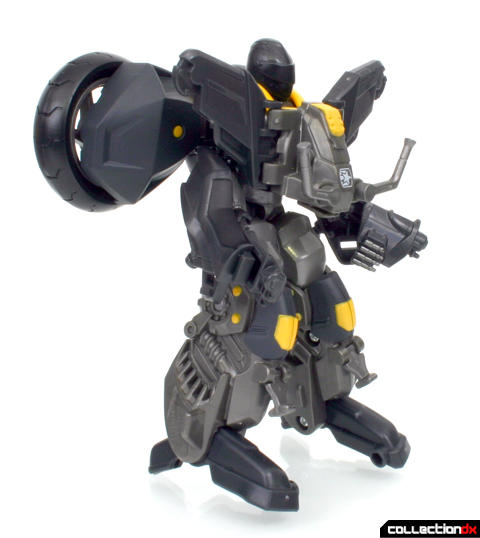 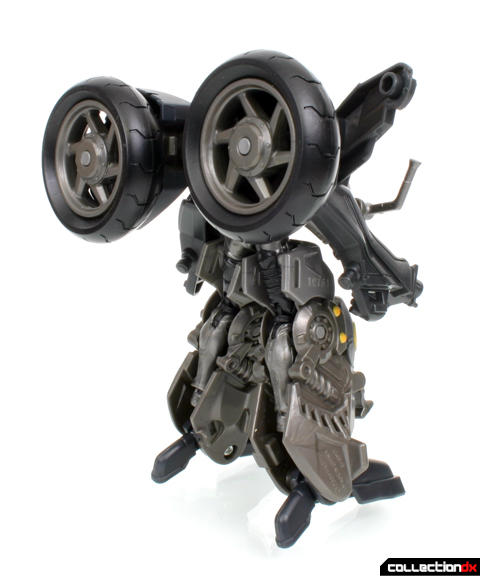 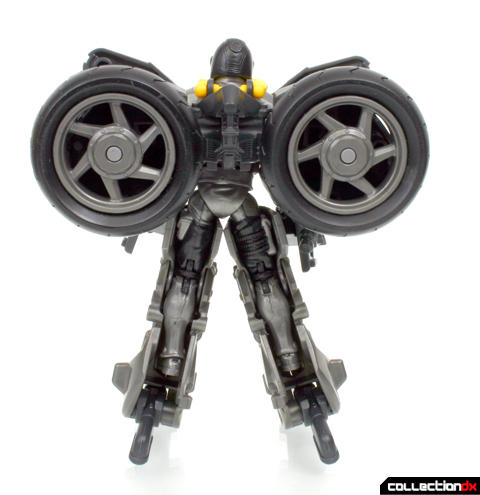 The arms can’t really move, either. And what’s going on there? There’s nothing for his hands to do. 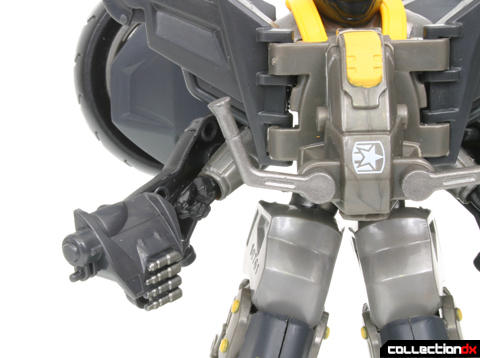 There’s movement in those knees, sure, but you have to support him to do it. Looks pretty cool while leaning against something, at least. 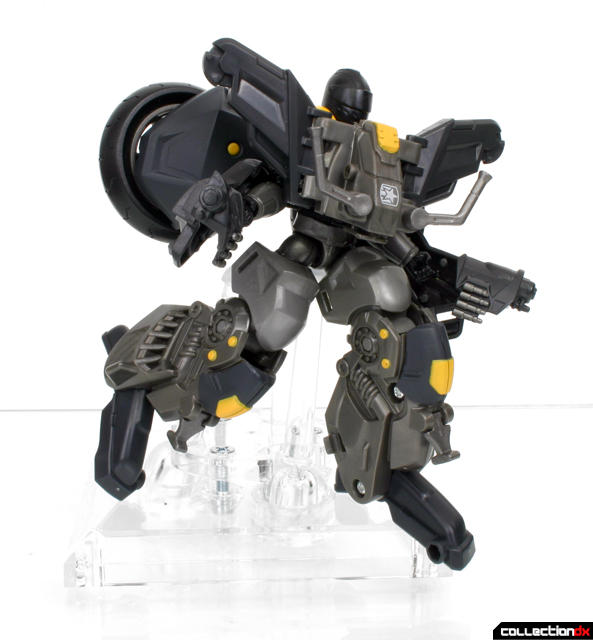 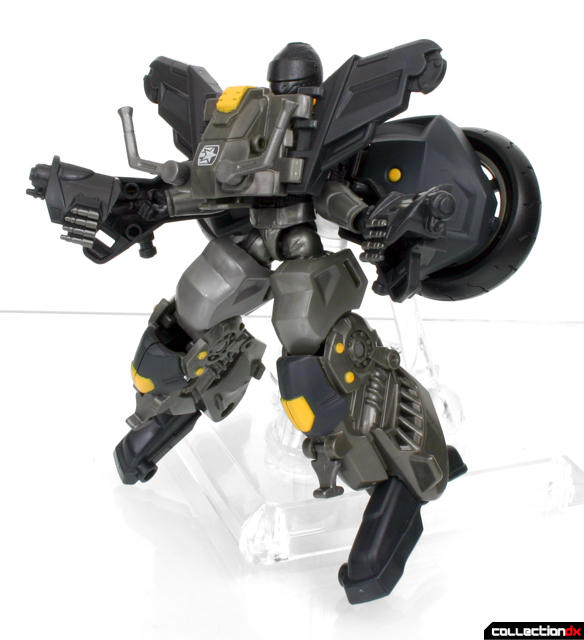 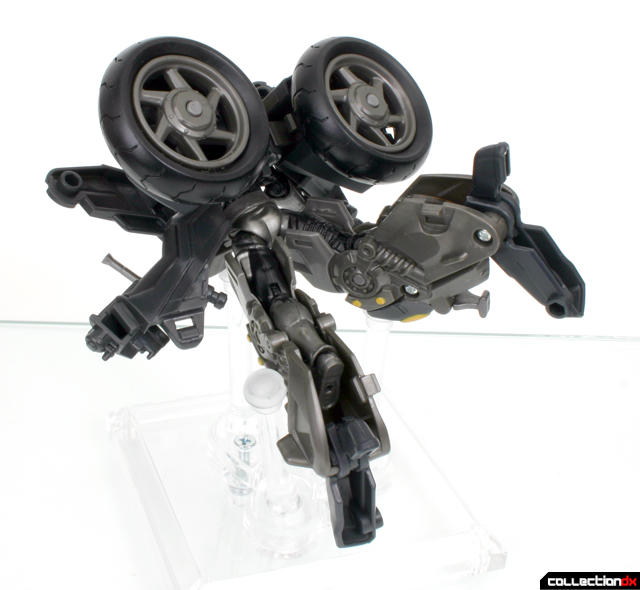 The Cycle Armor resembles many of its Japanese forbears in its almost total lack of playability. Sure, everything looks pretty good. I like the wheels on the backpack, the detailed sculpting. It just doesn’t do anything but stand there. And it doesn’t do that very well either. He’s all off balance and tips over, parts flying, very easily. 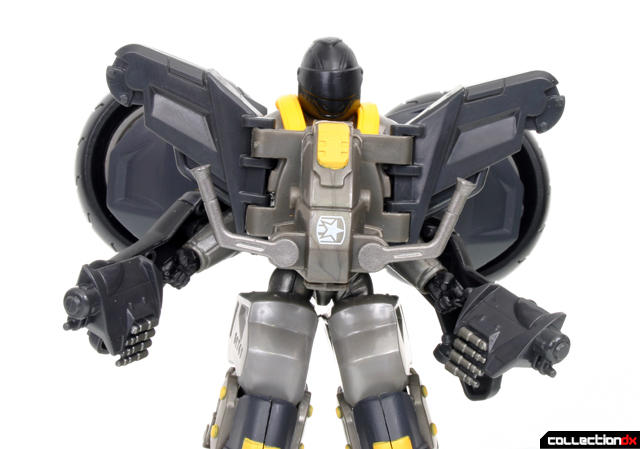 But I quibble. A neat toy. I’m glad this exists. It’s no better or worse than some other beloved middling cycle armors, but it’s something special all the same. I’m amazed that there’s a new, American, 1:18 Transforming (okay, parts-forming) motorcycle ride armor.

*Btw I know the handlebars are upside-down in mech mode. I think they look better that way.*

8 comments posted
He rides the cycle a LOT

He rides the cycle a LOT better if you slide his legs inside the armor; you can see it in my review over at Joebattlelines:

I really enjoyed this guy. It's a pity he really only made it to some markets.

Tell me about it! I've never been able to find one locally. Kind of want one, but not going to go out of my way just yet. :)

Excellent toy! Thanks for the good eye as if I saw it at the store I would have never realized that it turned into armor.

It's a sleeper, I think if more people would have known about it they would have picked one up!

Quite funny I was planning to review my blue SNAKE in the next few weeks.....

I got this guy a few weeks ago. Luckily, I didn't have to search a while as one of my friends traded him to me. I love transforming motorcycle armor things. It's nice that there's one that's both affordable and pretty decent.

I can imagine that the designer could have been dying to make his dream come true...

Which company's toy?
They should ask me, I would volunteer to put a Ninja-like cooler name!
Ashiko? Ashiiko? ...hmmmm, that's lower than failing grade.

This toy was made by Hasbro, the same company that makes Transformers. It is possible that they had some of the same staff work on it.

I think it is great that a Japanese fan can read CollectionDX. I hope more Japanese fans visit, because we have a lot in common. As you can see we love a lot of Japanese toys here!

Yes, I was wondering why not so many Japanese join English-based communities? Hm, it's just Japan is both economically and culturally independent country, I suppose.
(Not about toy markets, but my favorite date tells us...World's Music Industry in Number, looks like only in US and Japan, intellectual property rights have been protected : having extra powers of economy. Additionally, Japan has been the largest music market since 2011. It shows people are not dead even after The Earthquake problem.)

I just tried escaping from Facebook community where people just push "LIKE" buttons. I prefer deeper communities. Am I just from the old school?