GeGeGe no Kitaro began life as a Manga written and drawn by the famous Shigeru Mizuki in 1959. Its story has been told as comic books, anime, feature films, and even video games. To say that the show and its characters are Japanese cultural icons is an understatement.

The series is so popular, in fact, that in the town of Sakaiminato, Japan there is a street named after Mizuki Shigeru that has bronze statues of 134 characters from his comics. In the same town, there is also museum dedicated to the artist and his works.

The story revolves around a ghost boy named Kitaro who is the last living member of the Ghost Tribe. In the series he fights for peace between Yokai (demons) and humans. The name GeGeGe is an onomatopoeia for the sound of someone cackling in a spooky voice, so it could be loosely translated as “Spooky Kitaro”. The series is light-hearted and silly, much like Scooby Doo in the US but more morbid.

The Revoltech release is part of the Takeya sub-line, meaning it was sculpted by Master Sculptor Takeuki Takeya - the mind behind the S.I.C. series.

GeGeGe no Kitaro is available at HobbyLink Japan

The box is nice, but it's the same as the other releases from GeGeGe no Kitaro, just with a different sticker on front. 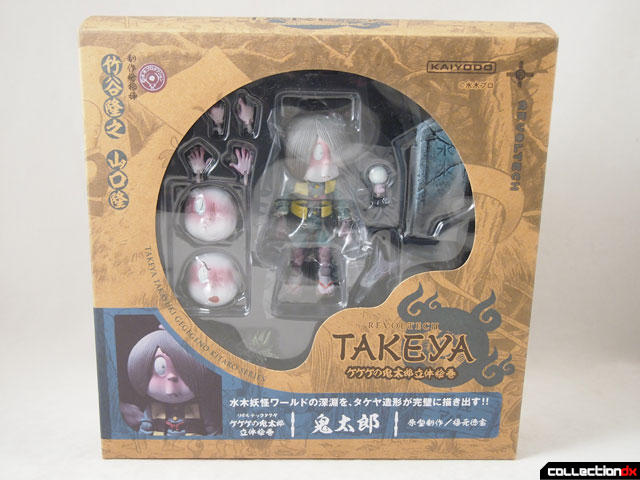 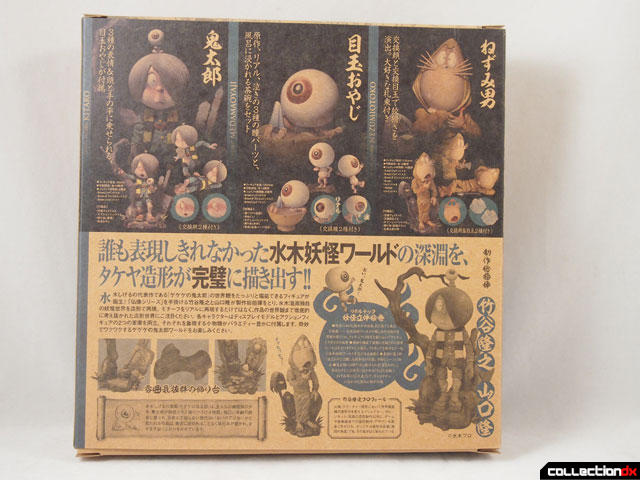 Included is a stand, figure, container and multiple accessory parts.

First off, the figure looks great. It looks JUST like the character in the manga. It's got a ton of articulation, both subtle and obvious. All the joints are Revoltech joints except for the knees, elbows, and wrists. 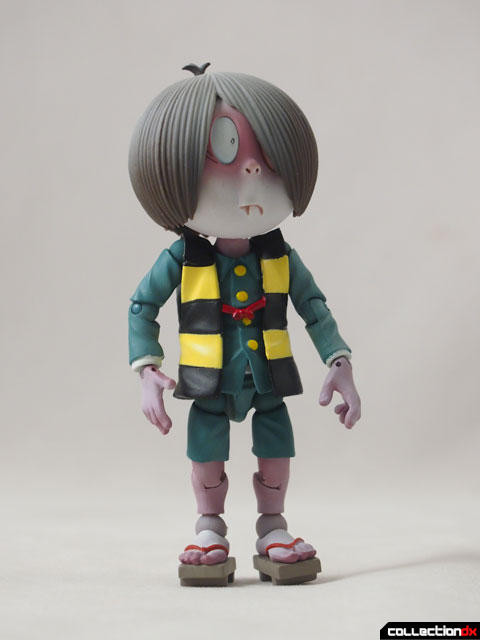 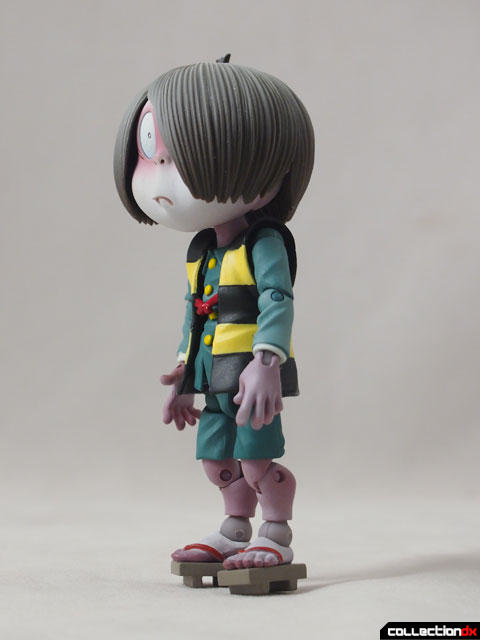 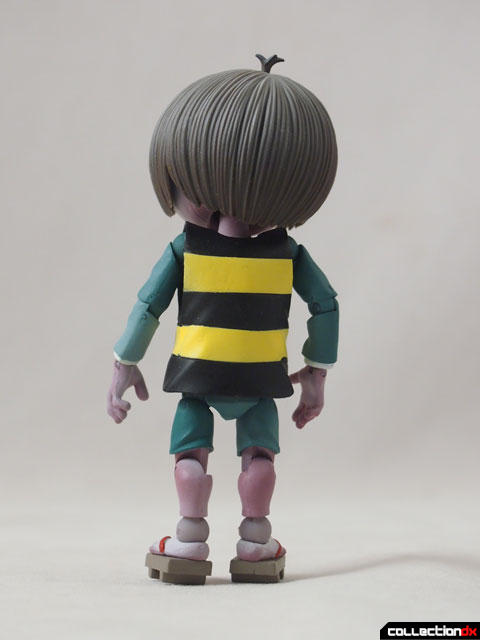 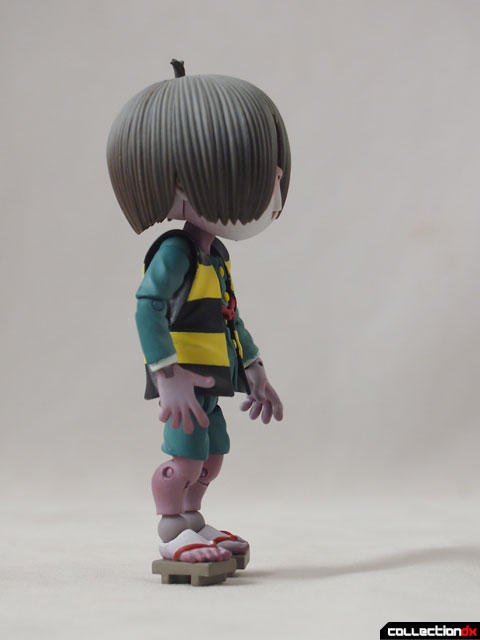 Kitaro's vest and hair are rubber, the rest is PVC plastic. 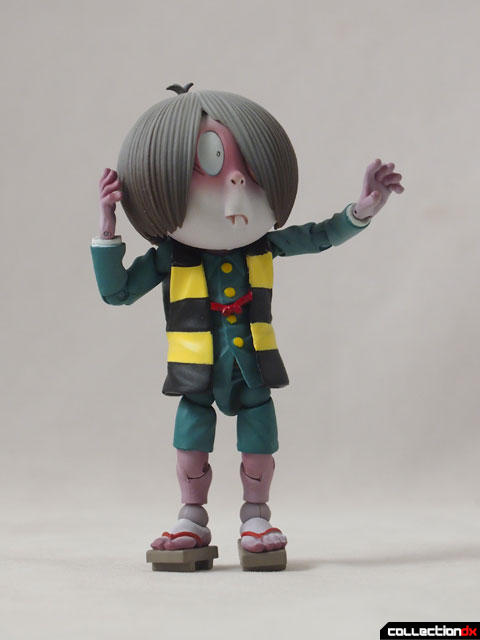 The stand is as much a figure as the figure itself. It has such personality. You need to attach the branch and the gravestone. 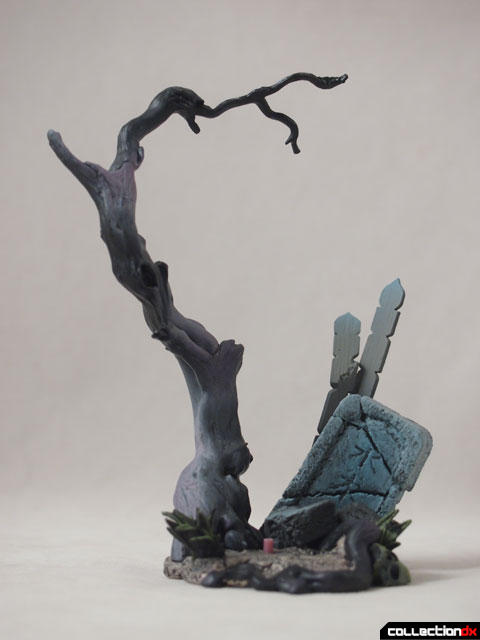 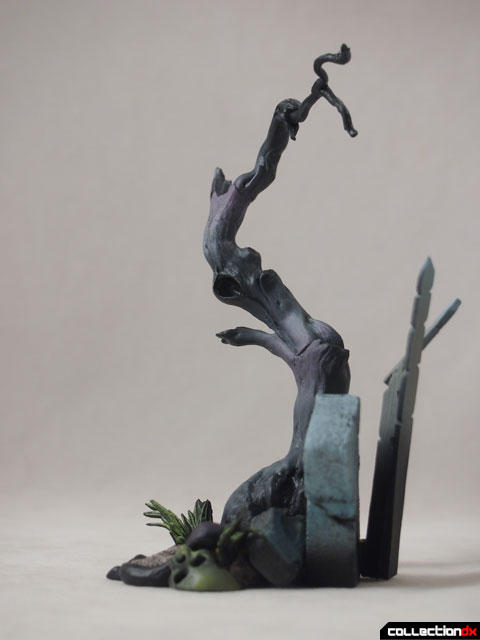 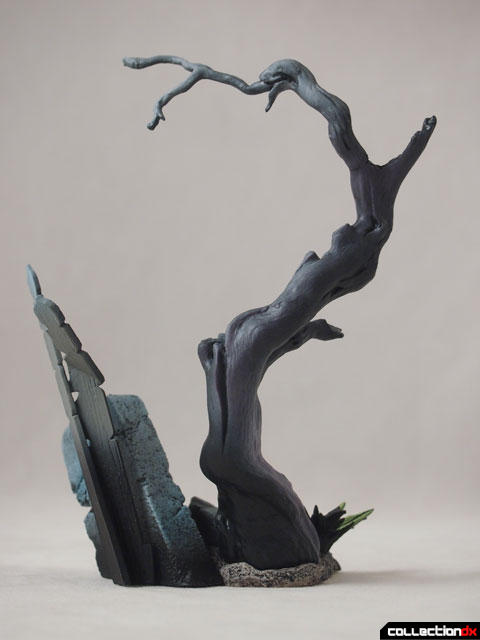 Kitaro attaches to the base by a peg into the foot. He stands securely if you make sure the peg is all the way in. 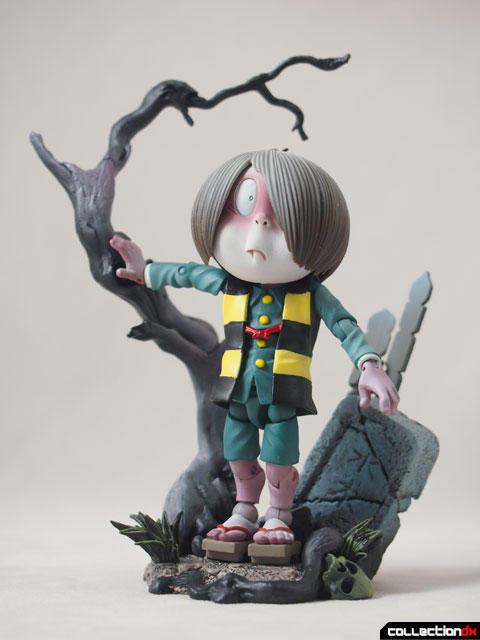 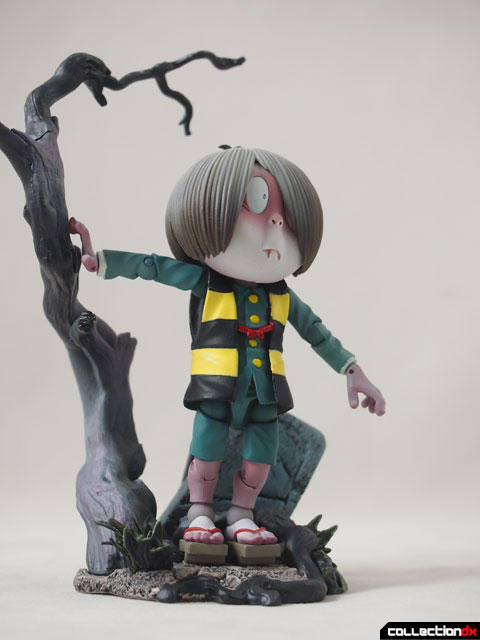 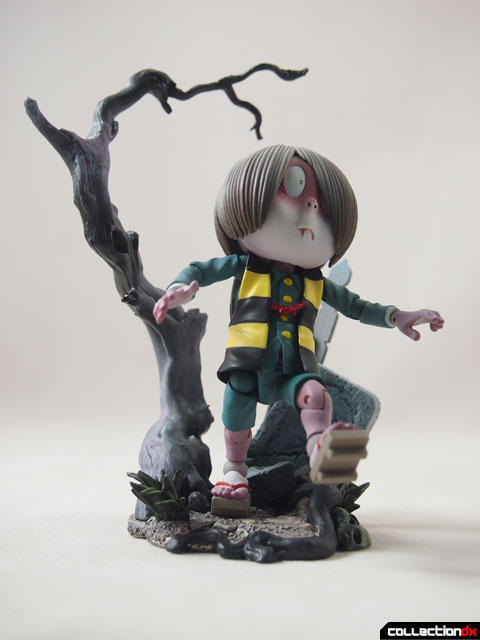 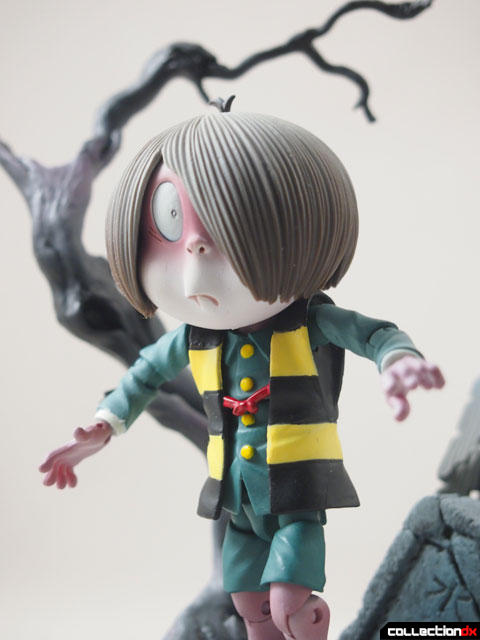 Two additional faces are included and are replaced by removing the hair and swapping the faceplates. The eyes are also removable and interchangable. 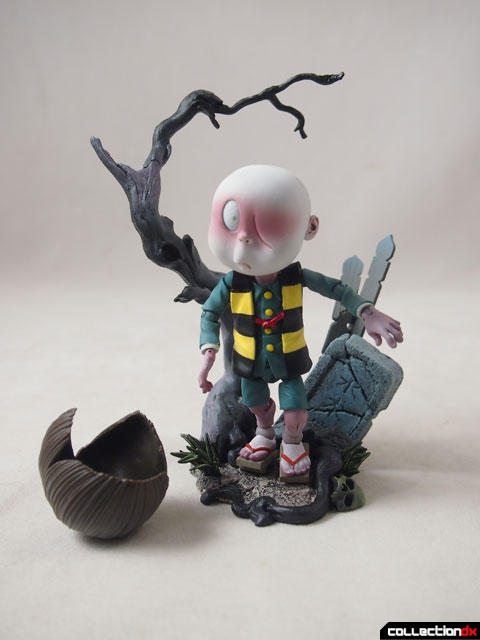 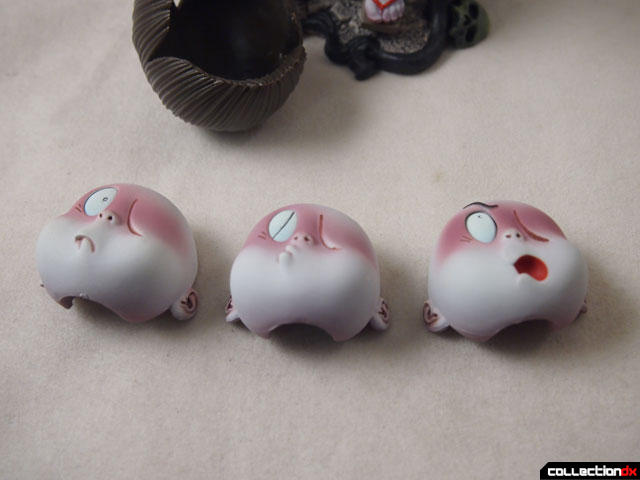 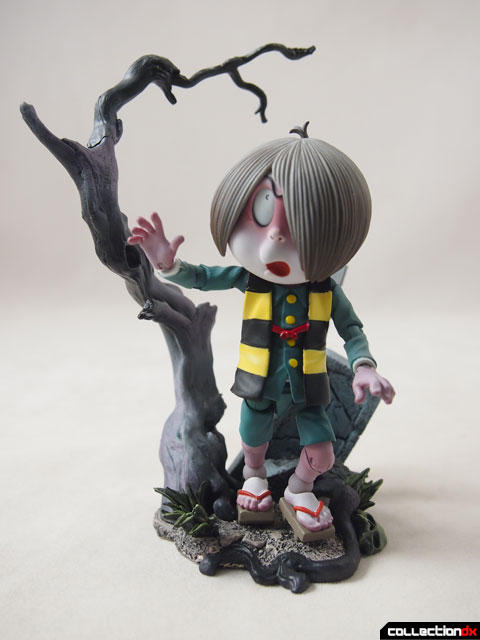 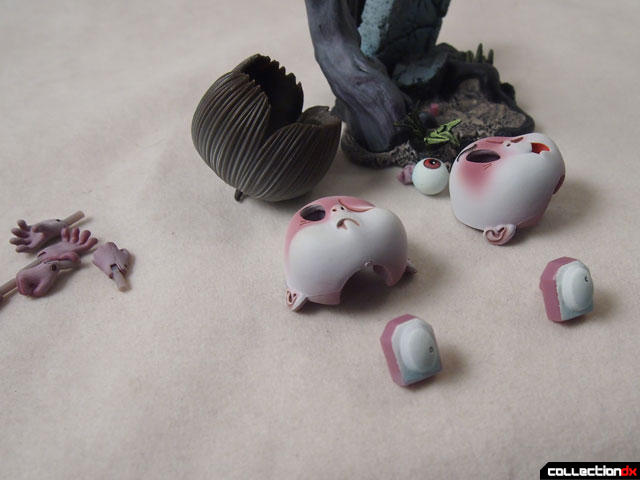 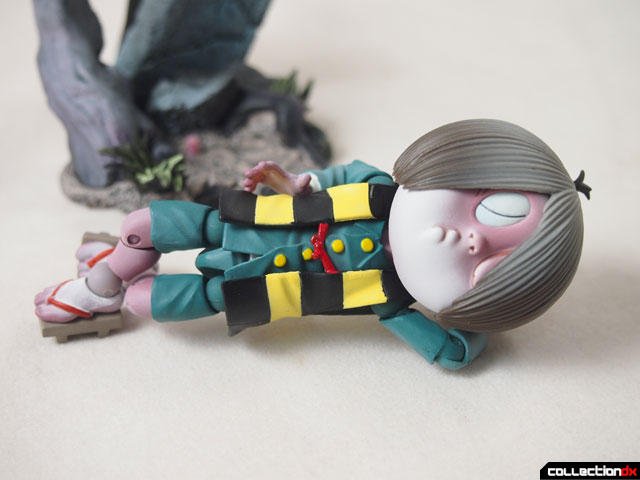 Various hands are included and easy to swap out. One hand has a hole in it so that you can plug in the included Medama-Oyaji figure. 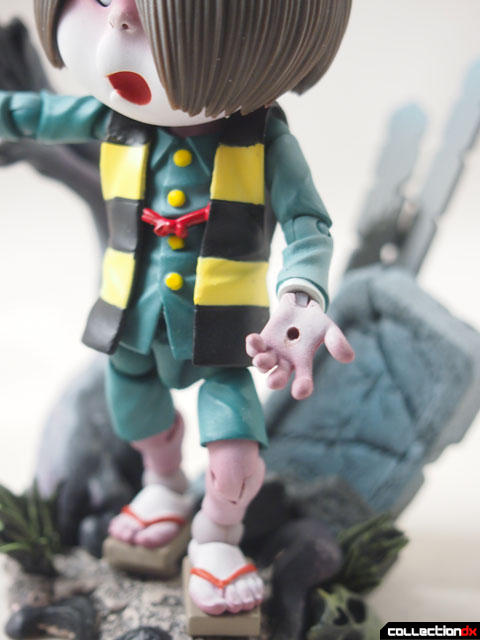 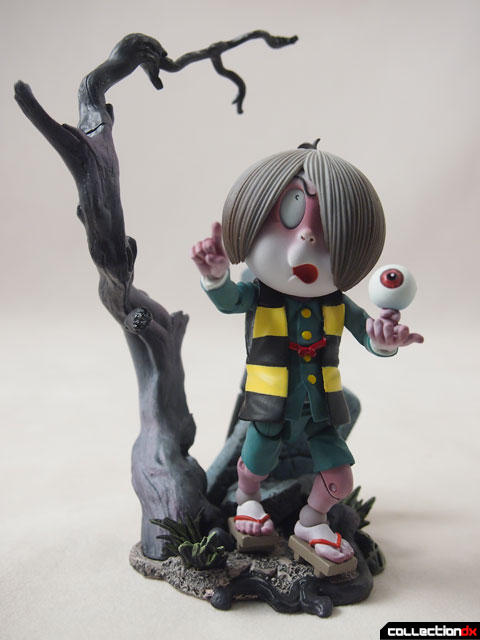 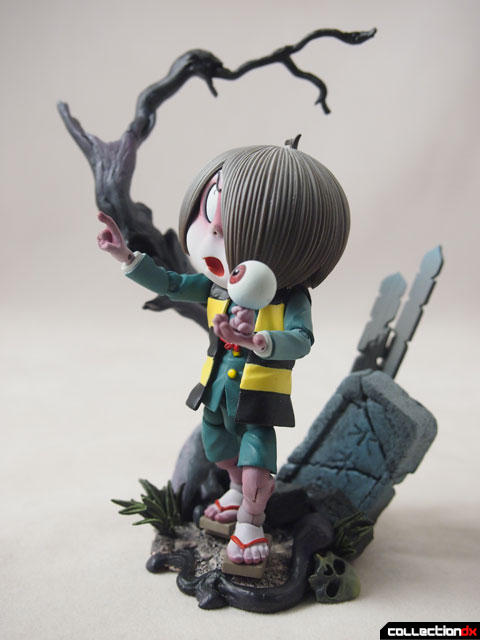 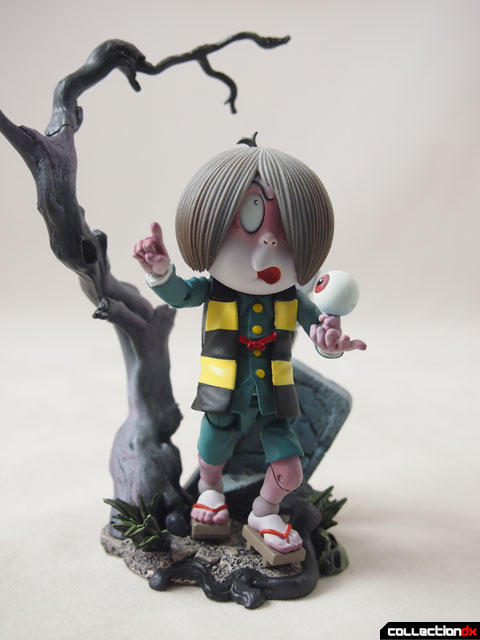 You can also remove the bit of hair at the top and plug Medama-Oyaji in. 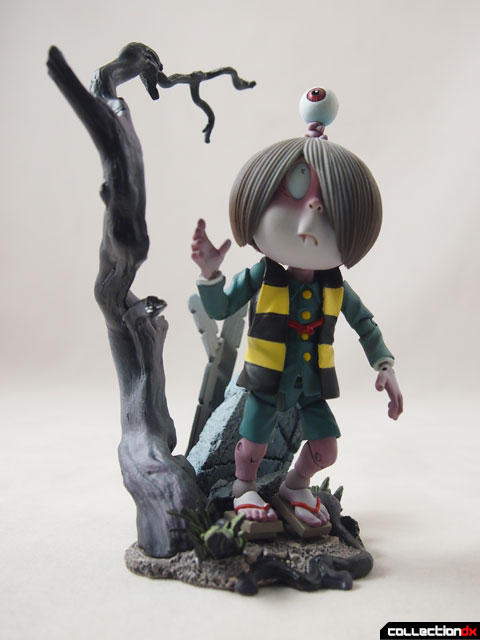 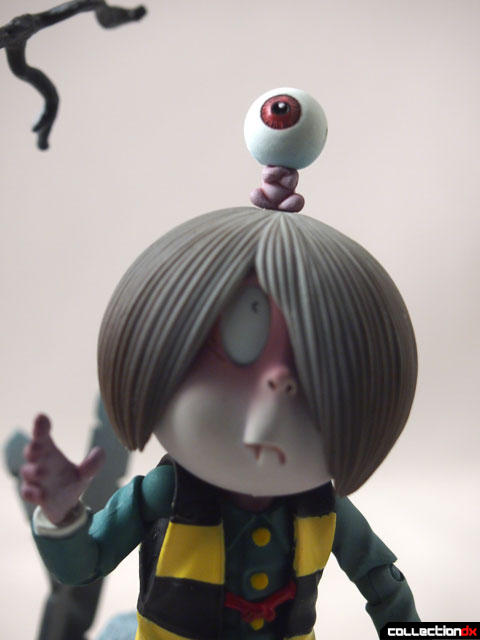 Kitaro puts on his sleepy face to rest. 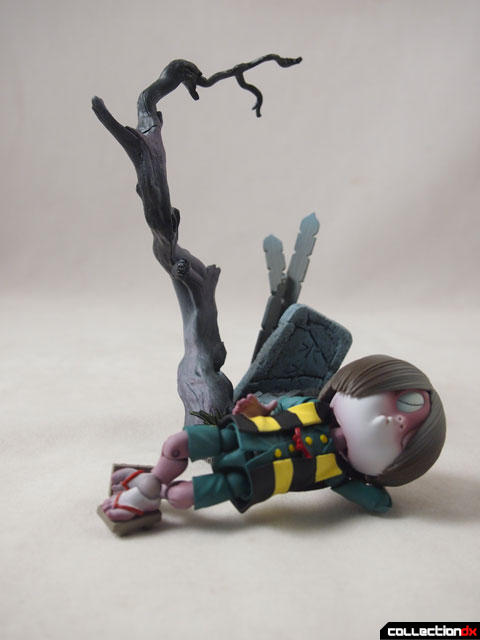 Overall, I liked this figure a lot, despite being done with Revoltech. This was a fresh and interesting take for me, and it's done by one of my favorite sculptors. If you like Showa-era characters, this is a good buy.

GeGeGe no Kitaro is available at HobbyLink Japan

3 comments posted
Beware the giant eyeballs in the sky!

Heh, I actually know Sakaiminato quite well - I have Japanese friends there and have stayed in the town a couple of times. The first time I went there was quite a surprise, as I didn't know to expect and only had a friends descriptions to go on. So committed is the main street to this character that some of the lampposts actually are giant eyeballs and several of the local trains that run from nearby Yonago are themed around the characters, including the infamous "catgirl" (*not* that type of catgirl, this one is... scary... ) train, which even has announcements voiced "in character".

If you happen to find yourself in that area with time to spare, worth a morning or afternoon to look round - in fact, stay until evening, if you can manage it, when its dark as its best for the full spooky effect!

I saw the 80's version of GeGeGe no Kitaro in the early 90's when it would air on a channel that for one day a week would have Japanese programing (mostly news). Surprisingly there were subtitles.

As with VZMK2 I also grew up on the 80's version. And this review makes me so sad that I waisted all my money before getting one of these.

Though I do have to say that you are misinformed on the whole back story of GeGeGe No Kitaro. Shigeru Mizuki didn't create Kitaro he revived the character from the Kamishibai era after the war. Just like they did with Ogon Bat. No one really remembers who made the Original Kitaro but he did have several different writers in the pre-war era. Same goes for his 1959 revival. Shigeru wasn't the only one he was just the most successful one. :)