As an American, I enjoy many freedoms in this beautiful country. Perhaps the most wonderful of them is the freedom to browse Japanese websites and order discounted toys of visual novel robots based on fighter jets. And so, in celebration of Independence Day, I will be looking at a true American war machine. Flying in to demonstrate the military might of the Red, White, and Blue, is the F-22A Raptor. 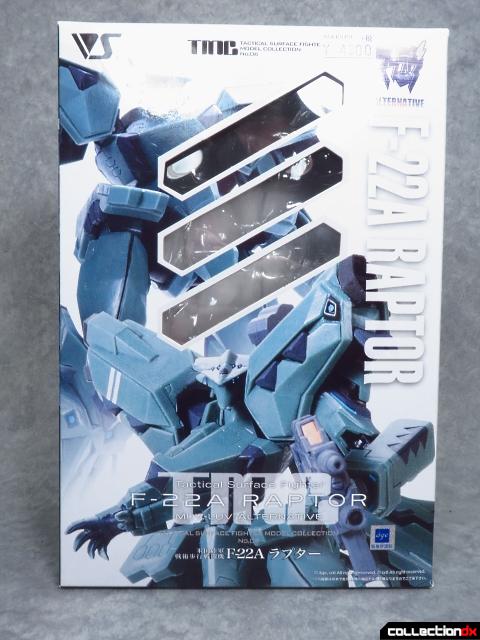 This version of the Raptor is part of the Tactical Surface Model Collection (TMC), which is an offshoot of Volks's main A3 line. The overall aim of TMC was to re-release older figures at a lower price point. They all come in a slimmed down box, and sometimes have a reduced accessory count. 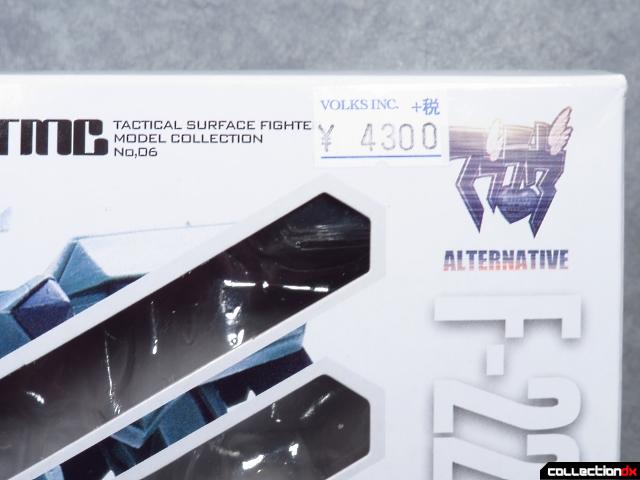 I bought my Raptor used off of Mandarake for 1,000 yen. Oddly enough, this toy came from an official Volks shop with the original price tag still on it. Whoever purchased this for the full MSRP was doing their part in support of our glorious fictional futuristic armed forces. 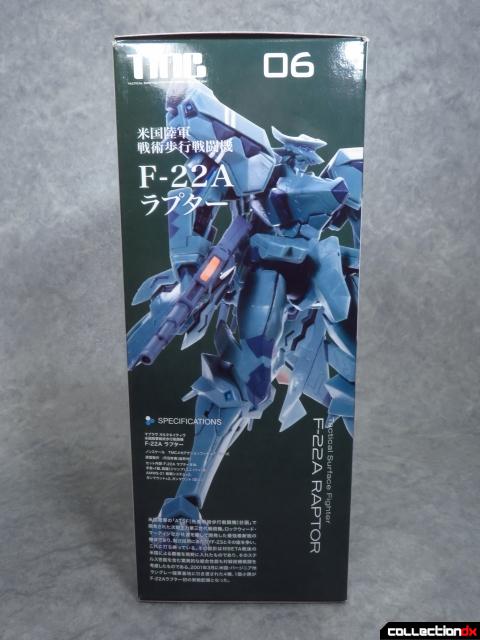 One side of the box has an eye-catching image of the toy in an aggressive stance. 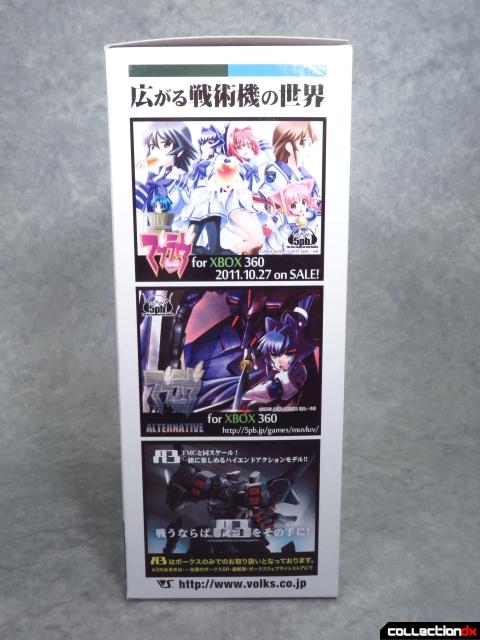 The other side was cross-selling the latest A3 figures, as well as Muv-Luv's and Muv-Luv Alternative's ports to the XBox 360 (the otaku's console). 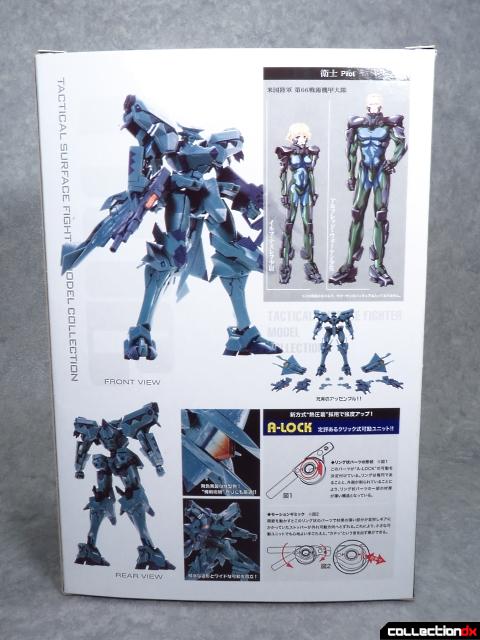 Around back is some stock photos with a layout of all the accessories the toy comes with. 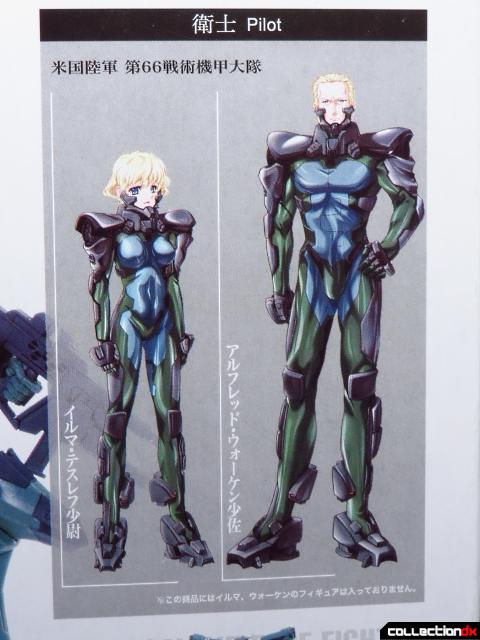 Also present is artwork of both Irma Thesleff and her commanding officer, Major Alfred Walken (a fine American), in their standard issue Fortified Suits. Those who defend our nation lay everything out there with naked pride. 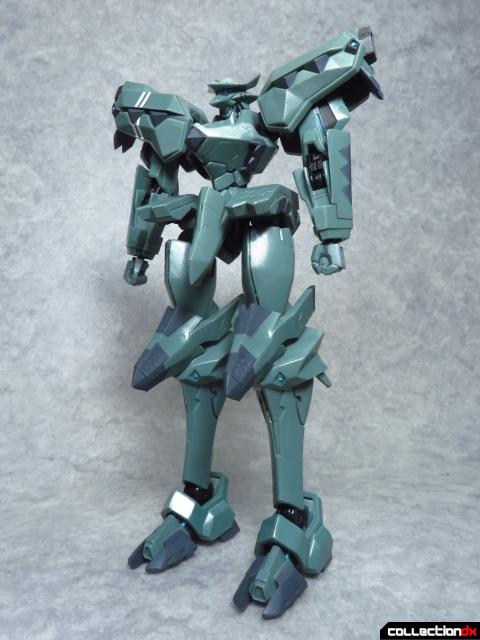 This toy of an American Tactical Surface Fighter (manufactured in China) stands six inches tall and is an all-PVC plastic figure. Like the F-15E Strike Eagle I reviewed, this toy is the same mold as its predecessor (in this case, the A3 F-22), but is made from different plastic. It is still PVC, but the toy has a more waxy feel, with each part feeling harder (and potentially more brittle). 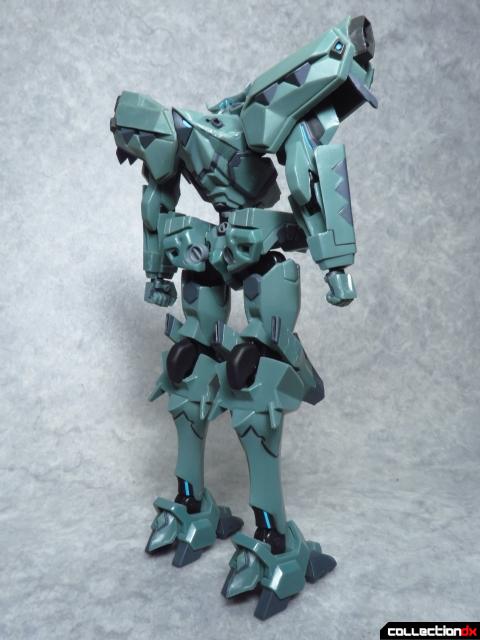 While it's an attractive rendition of the Raptor, I feel like everything this toy does right is better attributed to the original A3 figure. I actually purchased both the TMC and A3 toy at the same time, but the latter was sadly plagued with poor quality control and is not fit for review duty. 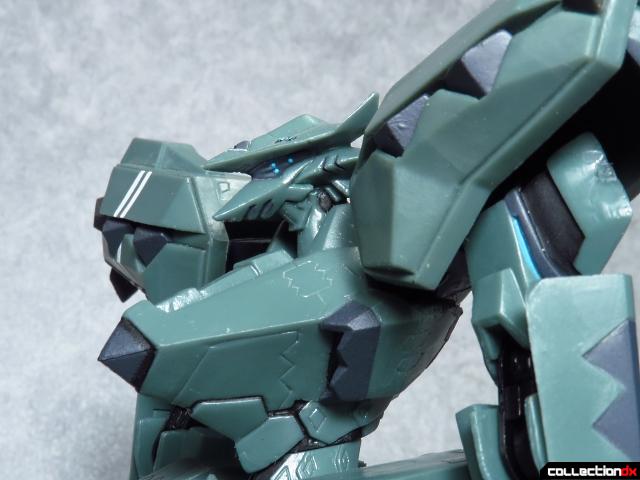 Iffy plastic quality aside, this toy is still visually striking and makes for a cool thing to just look at. For whatever reason, the Raptor quickly became my one of my top Muv-Luv designs, so even a subpar rendition still excites me. Again, this is more a tribute to the original A3 figure, whose sculpt aged remarkably well for a toy that was released in 2007. 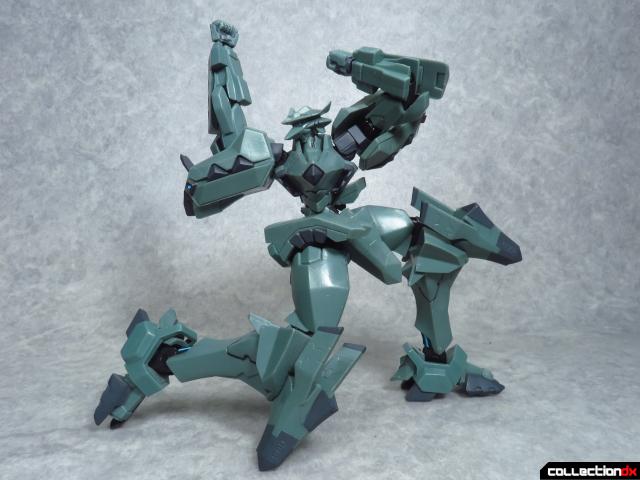 Articulation-wise, the Raptor scores a C+/B- on the Jmann posing scale. While its joints are competently laid out, the TMC version makes all the tiny bits extra pointy, as well as making a lot of the ridges sharp enough to make handling the figure less fun. Plus, you're dealing with Volks's patented A-Lock joints, which, as I've said before, are akin to off-brand Revoltech joints.

And as always, remember to remove those little back-of-the-knee filler parts before bending the legs. 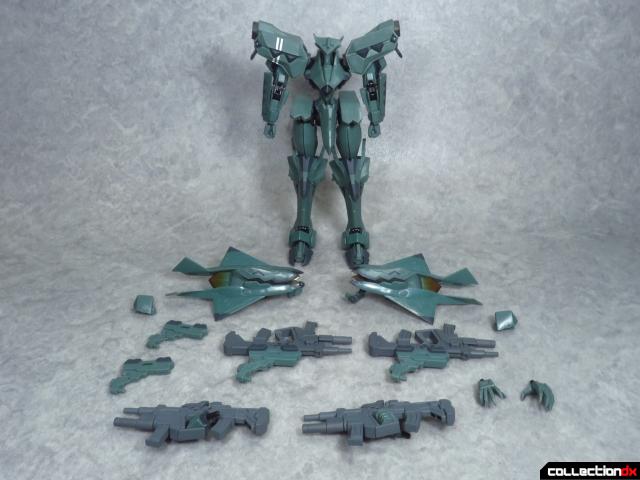 One thing the toy does have going for it is that the TMC version comes with the same accessories as the A3 one. You get the full range of assault cannons, mount pylons, two pairs of hands (fists and splayed), as well as the jump unit equipment. 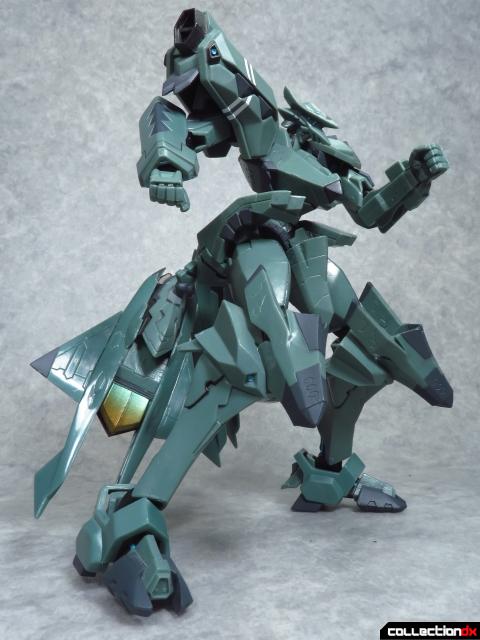 With the bulky jump units attached, the Raptor gets more difficult to balance while posing. Also, the TMC version is made of lighter plastic, which makes it more prone to tipping backwards. 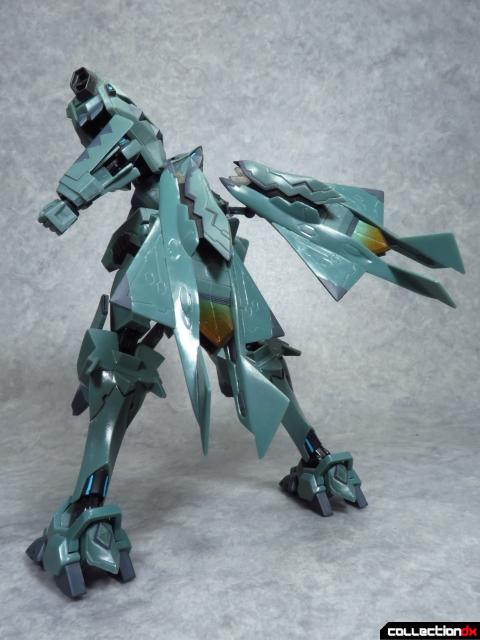 It also doesn't help that the A3 Raptor is one of the earlier figures, so its jump units are connected via a simple two peg swivel joint. The tolerances for this version also feel off, and the connectors had some weird ridges on the end that goes into the back of the skirt armor that ended up mangling the hole where they attach. I sanded those ridges off, but the damage was done and now one of the jump units likes to fall off constantly. 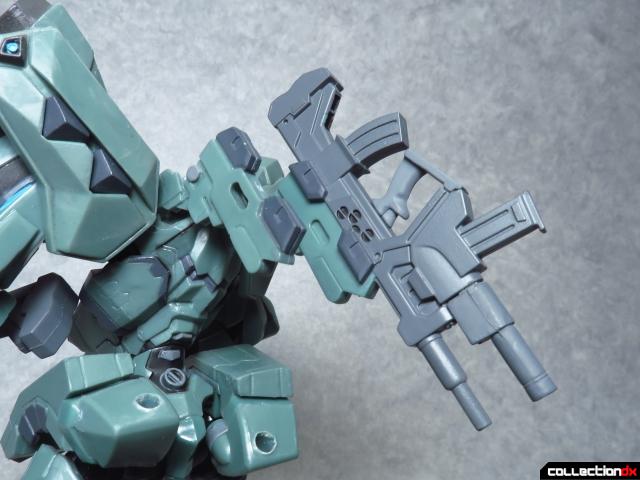 The mount pylons don't fare much better. Their pegs are slightly too large for the holes they go into, and the plastic doesn't feel sturdy enough to survive some adjustment without nasty stress marks. I suppose in some way this is for the best, as the toy is back-heavy enough as is. 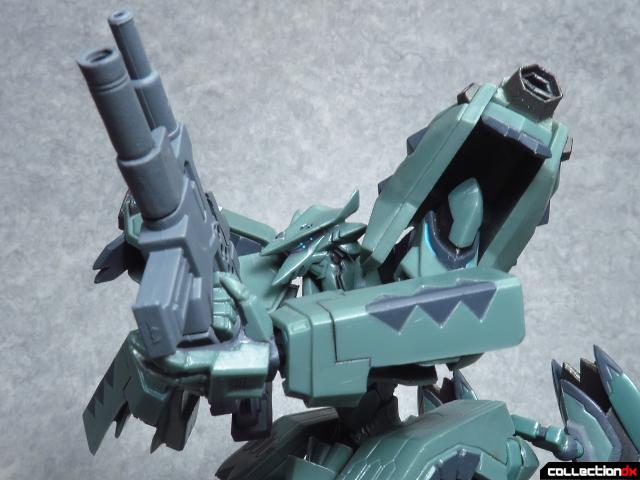 On the plus side, all the hands work fine, so the TMC Raptor can at least look the part. 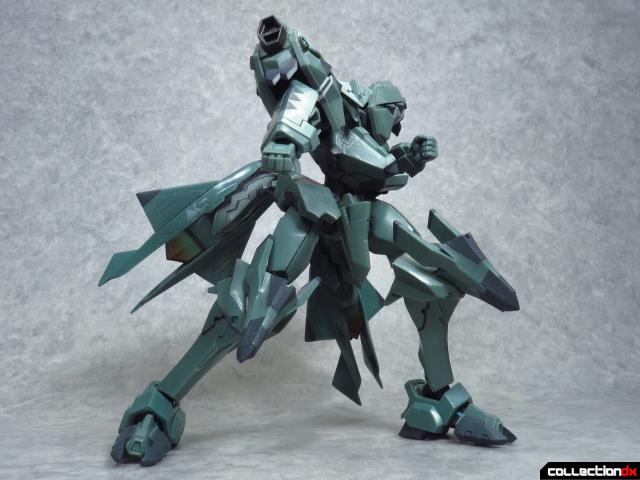 Again, the sheer coolness of the Raptor design manages to prop up a less than stellar figure. 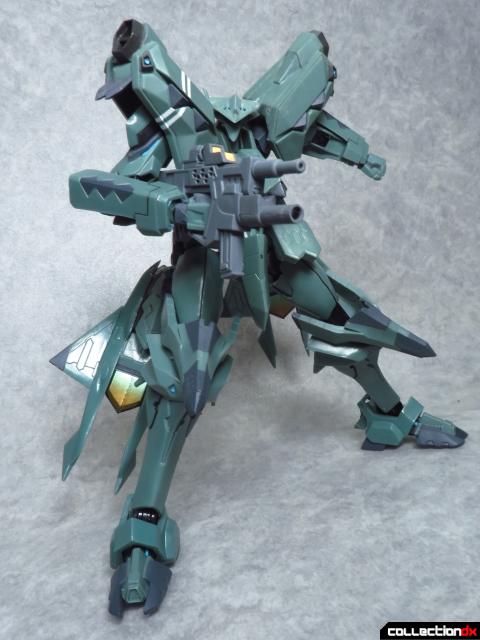 Pretty much all of these shots took a fair bit of patience on my part. 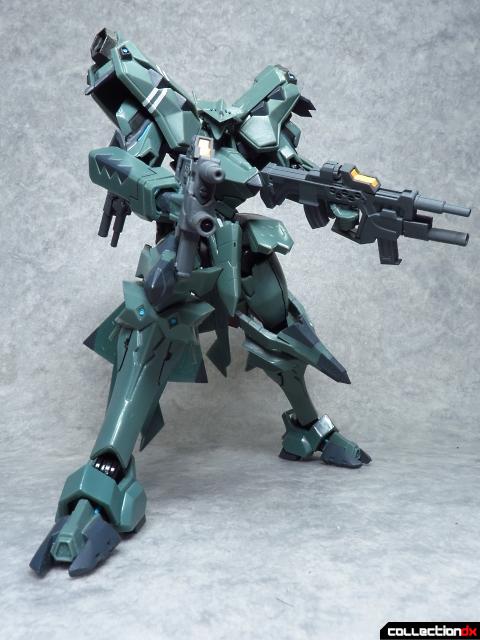 But the thought of warm apple pie and white picket fences allowed me to persevere and honor our nation's alien-fighting army of giant robots. 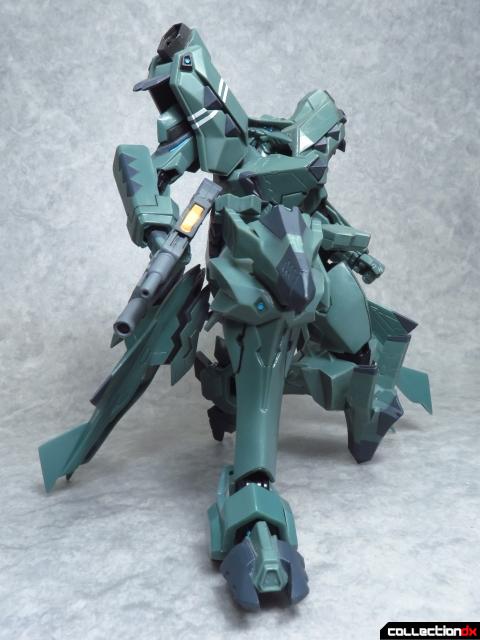 Kneeling is a bit of a chore though, as the skirt armor doesn't move very well, so I had to take it off and then put it back on in a new position. Even then, the hip joints and the wonky tolerances on the TMC version forced the right hip too close to the underside of the skirt, which limits the range of motion. Also, some of the parts rub together in a way that causes dents in the plastic, so be cautious while posing. 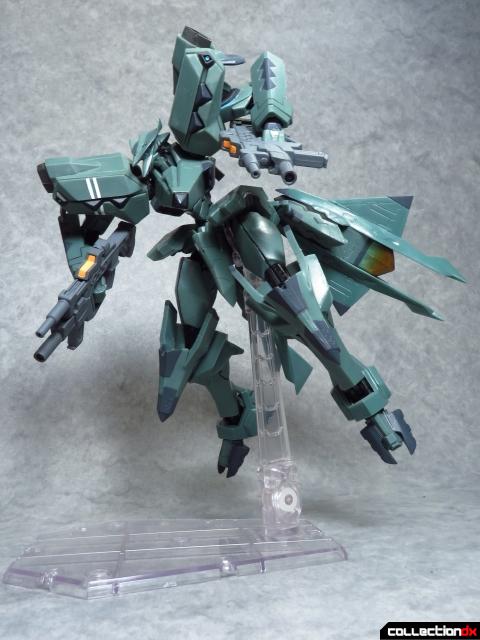 And a Tamashii Stage let me get some decent flying poses. 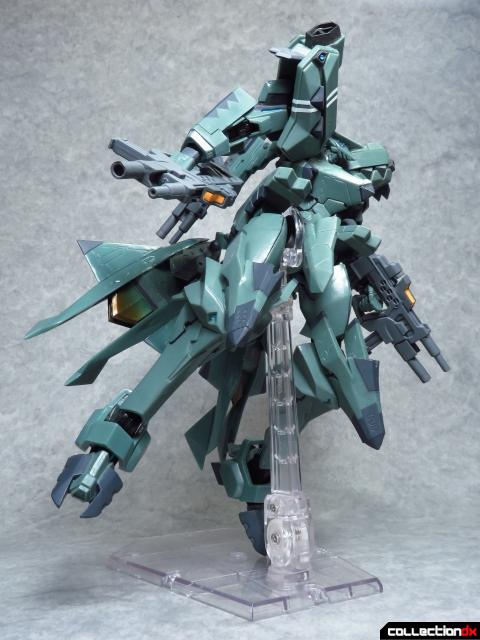 It's speedy, stealthy, and army green. 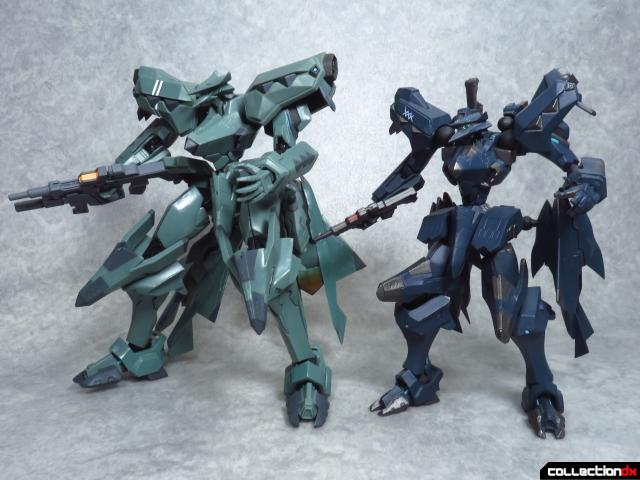 Here's the TMC Raptor next to the Revoltech by Kaiyodo. I would wholeheartedly recommend getting the latter, as it is a great action figure. Sadly, they never made a green one, only black and gray. 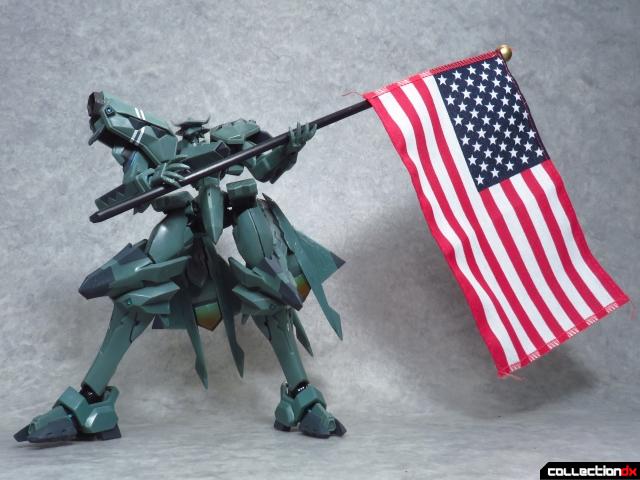 Frankly, I find the TMC Raptor works better as a miniature flag holder than an action figure. Although it lacks hands that can grip the pole, so you may have to get creative with the pose to make it all work. 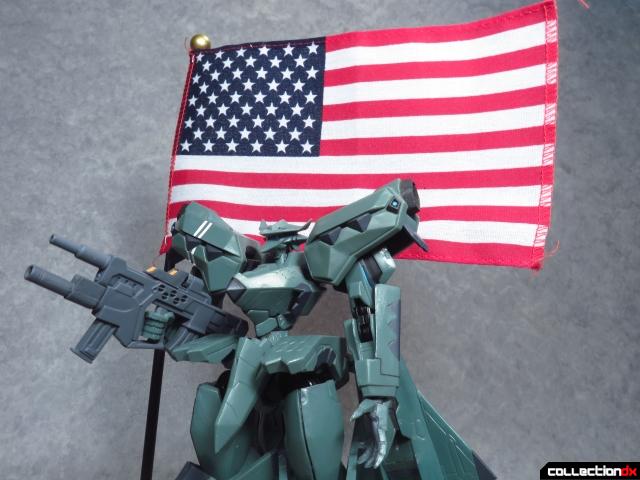 Defending freedom from man-eating aliens is hard, and the TMC F-22A Raptor doesn't make it any easier.

This toy is not something I would recommend people go out and buy. While some of the TMC figures make for decent fill-ins if you're in need for a cheap Muv-Luv fix, this one is just no fun. If you end up buying one on heavy discount, maybe just remove all of its joints for spare parts and mod the toy itself into a cool looking statue. Otherwise, just get the Revoltech, A3 figure, or Kotobukiya kit if you need a Raptor in your squad. As it is, this F-22A is an inferior version of an already dated figure.

But after all that, my heart still beats for the Stars and Stripes, with the knowledge that we have the coolest robots in a Japanese sci-fi series. 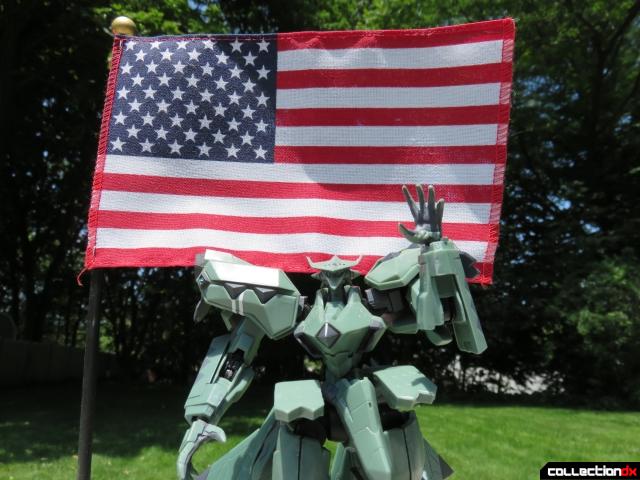