As I delve deeper and deeper into the BETA hole I find myself knee-deep in the first Muv-Luv visual novel. Muv-Luv Extra is the first of the trilogy and must be completed before I can unlock Muv-Luv Unlimited which resides in the same game. In Extra, the lovably lazy Takeru lives in an idyllic world where he and his friend Mikoto play video games, avoid the wrath of the girl next door, have hijinks with a super rich girl, and observe the insanity of a Japanese high school.

Just a typical day with Yuuko-sensei.

In Unlimited, Takeru wakes up to find that he has been inexplicably transported to a parallel world where mankind is under siege by vicious aliens and must fight back with their requisite giant robots called Tactical Surface Fighters (TSF). Takeru is especially confused at seeing all his friends and teachers as part of the military.

Yes this is really the same franchise!

Muv-Luv Alternative the second visual novel and is the longest of the three stories. It is essentially a chance for Takeru to get another shot as the life he lead in Unlimited.

The F-18E/F Super Hornet "Raging Busters" is the tenth entry in Kaiyodo's Muv-Luv Alternative Revoltech line. Despite the branding of the whole line, it does feature figures from both the Unlimited and the Alternative timeline and this guy is from the former. 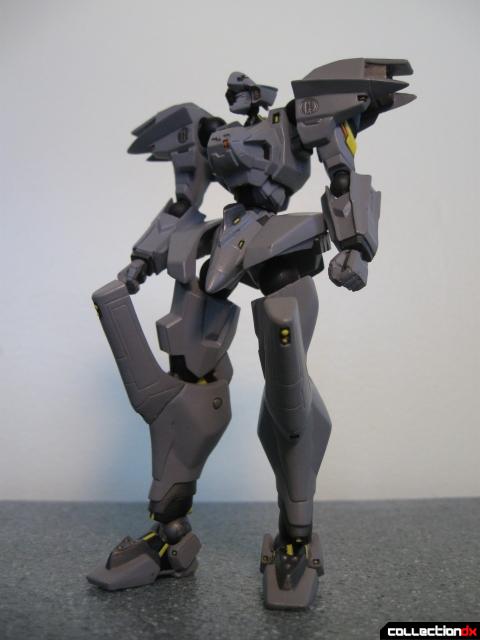 As my fourth TSF Revoltech, the Super Hornet is practically the same as the other three in terms of quality construction. It is roughly six inches tall and is made out of solid PVC with a plethora of Kaiyodo's patented Revoltech joints holding it together. I had been interested in acquiring the blue and yellow "Black Knives" version of this toy but happily traded a DVD set with a friend for this one. 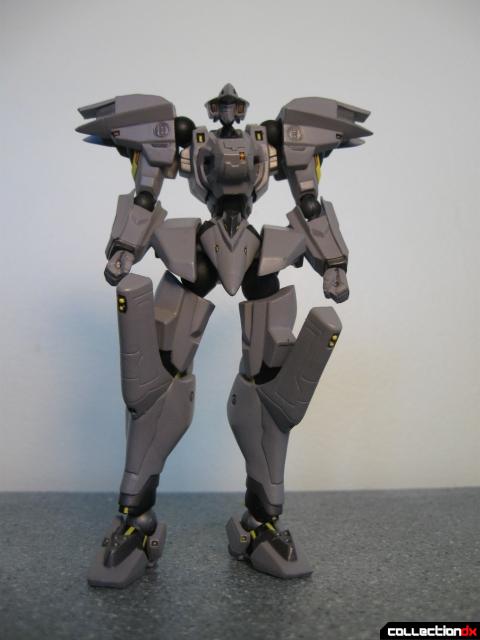 The Super Hornet is perhaps the best "entry level" design for Revoltech action figures. It's a clean, simple looking machine that echoes its real life namesake in terms of no-nonsense functionality. 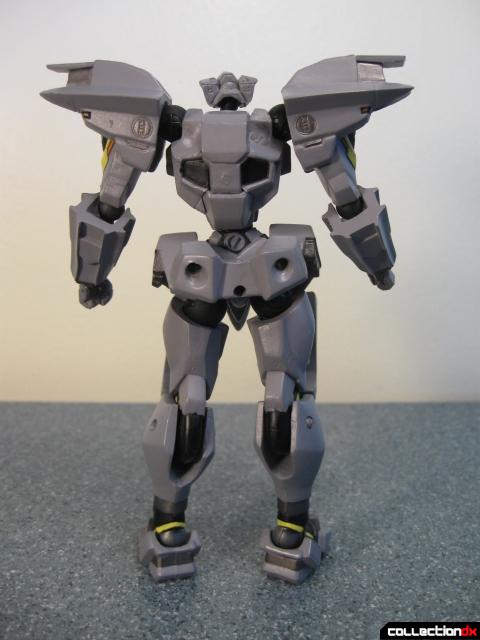 Unlike a lot of past Revoltechs, the Muv-Luv figures are fully capable of standing in a neutral pose. I also noticed that for whatever reason the rear torso of American TSF's resemble that of the Garland's from Megazone 23. 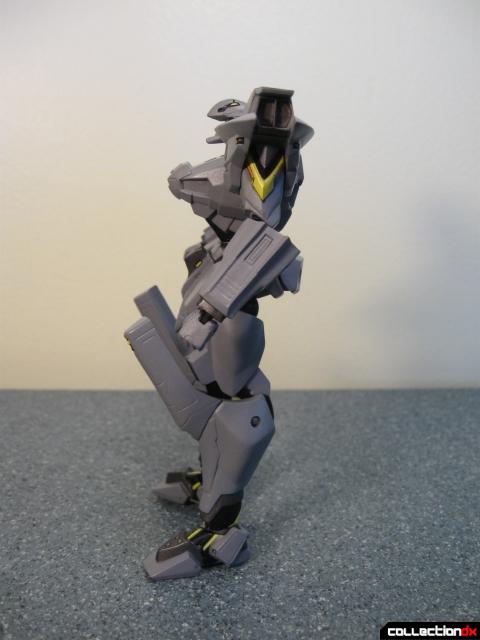 The characteristic large knee guards on American TSF's are where they store extra weapons and ammunition. There are panels inscribed on the knee guards to denote this but the toy is a little too small for that kind of functionality. In particular the Super Hornet's extra long knees can act as a effective counterweight in extreme poses too! 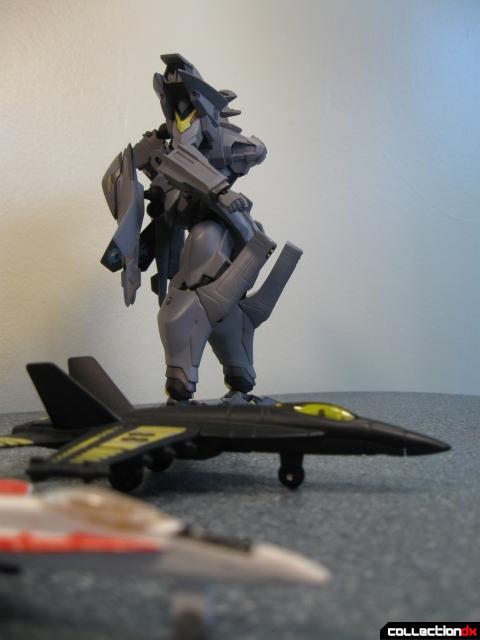 One day my airplane just grew arms 'n legs and walked off to fight the BETA... 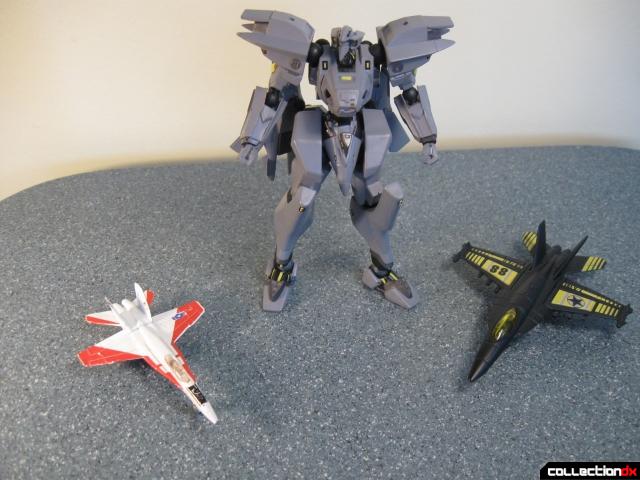 As I've mentioned before, Muv-Luv re-imagines real military aircraft as sweet robots. In doing so, several elements of the actual airplane are incorporated into the details of the corresponding TSF. From the top of the Super Hornet's head down to its pelvis, the design blends the front profile of the real machine into various parts of the TSF. 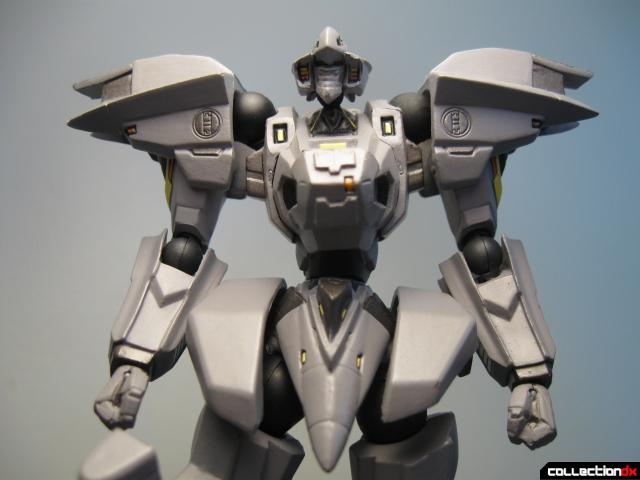 All TSF's share a similar silhouette which is admittedly based on the classic Detonator Orgun anime. 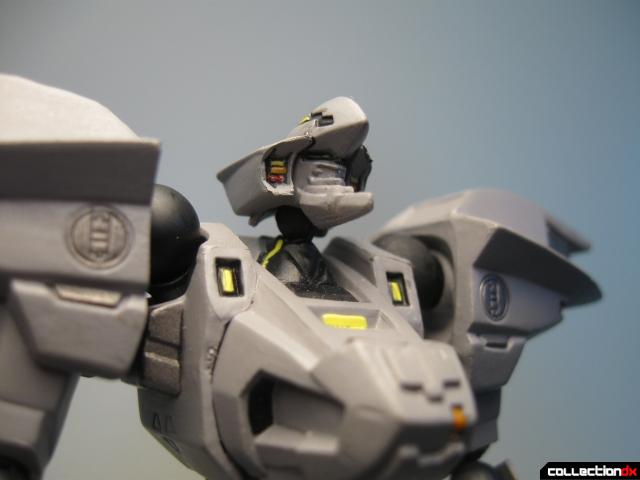 The head has both a false canopy on top with the LERX forming a brim above the face. The real Super Hornet's square intakes are now banks of sensors on either side of the head. Traveling down to the chest, the TSF has two intakes like its namesake and the groin and skirt armor also resemble the front of the aircraft. American machines tend to have a single visor like "eye" that looks a bit more mechanical and aloof than their Russian counterparts. Also note that there two thruster nozzles on each shoulder to reflect the twin engines of the real plane. 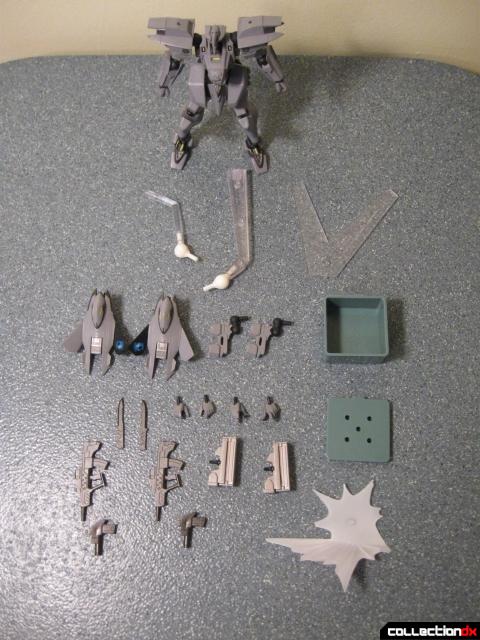 You get a well rounded number of accessories with a Muv-Luv Revoltech. In addition to standard Revoltech offerings like a stand and a box for storing small bits, you also get three pairs of optional hands, a pair of mount pylons, a pair of jet-like jump units, two guns, two knives, and a pair of missile launchers. Even my "favorite" effect part the action stamp is included! 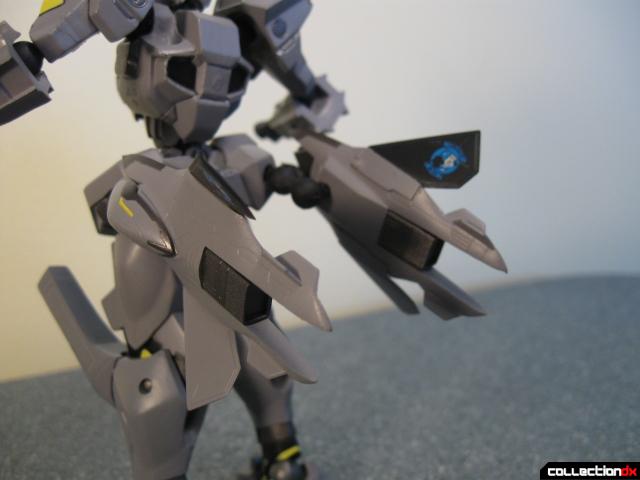 The Super Hornet's jump units are appropriately styled after its namesake and connect to the figure via double Revoltech joints. Due to their compactness I find it's easier to keep them out of the way than with my other TSF's. They also look kind of adorable. 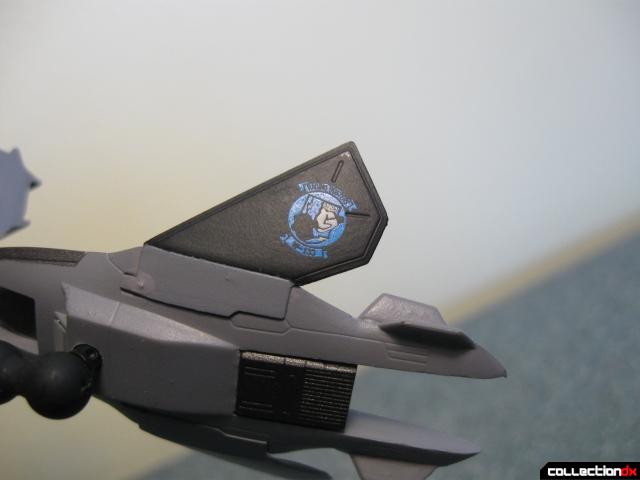 Much like with real airplanes, the Super Hornet has tail markings that denote its squadron of origin. This simple tampographed decal is quite well defined and you can actually read the "VF-133 Raging Busters" on the emblem. 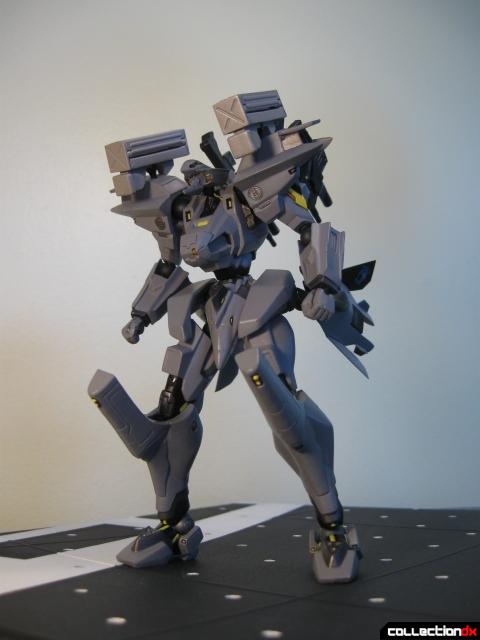 The rest of the figure is more of the same which is a good thing in this case. You can stick the Super Hornet's guns on the articulated mount pylons located on its back and plug in the missile launchers into its shoulders. The launchers attach with the same tiny Revoltech joint that is also used in the figure's neck and provide a modicum of useful articulation. I normally orient the joint so each launcher can tilt outward relative to the head so the shoulders can scrunch up while the launchers remain pointed to the sky. 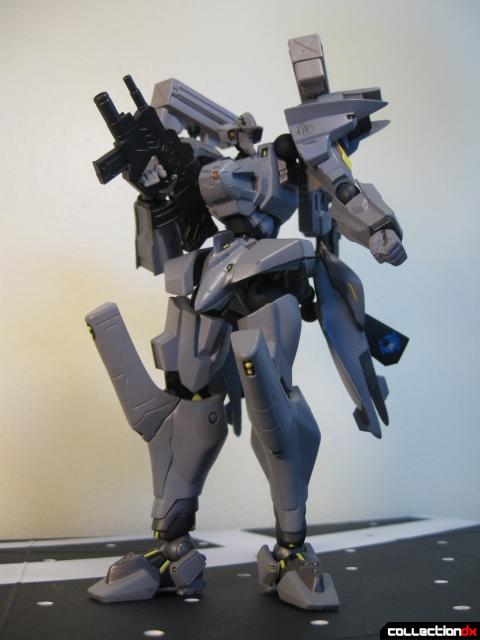 Like the real F/A-18, the Muv-Luv robot is a carrier based fighter that replaced the venerable F-14. When all loaded up the Super Hornet appears to have some real power in its slender frame. 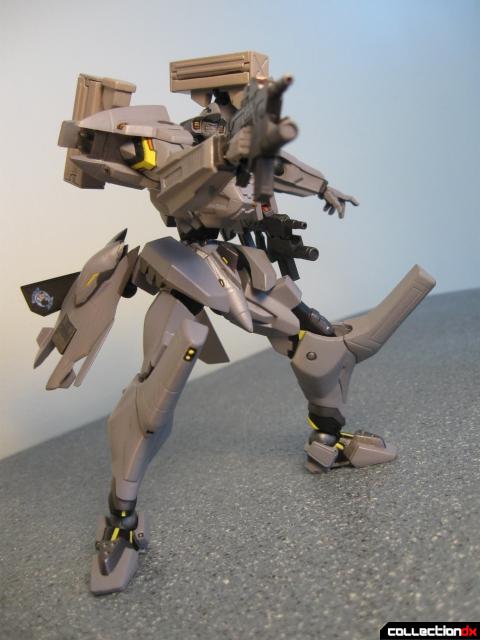 Like any good Revoltech, the Super Hornet is pure hand candy. The numerous clicky joints give you a great tactile sensation as you play with the figure. Even the remaining non-ratcheted joints in the knees are just as solid. The Muv-Luv Alternative line really plays to the strengths of the brand by providing simple, straightforward action. 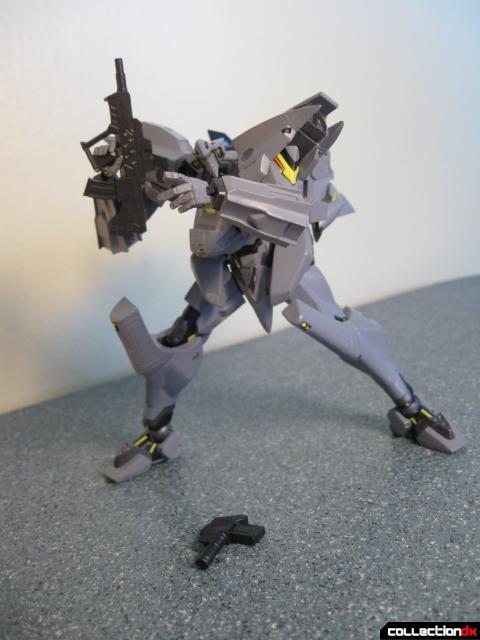 To lighten the load, the underslung cannon can be detached from both guns. 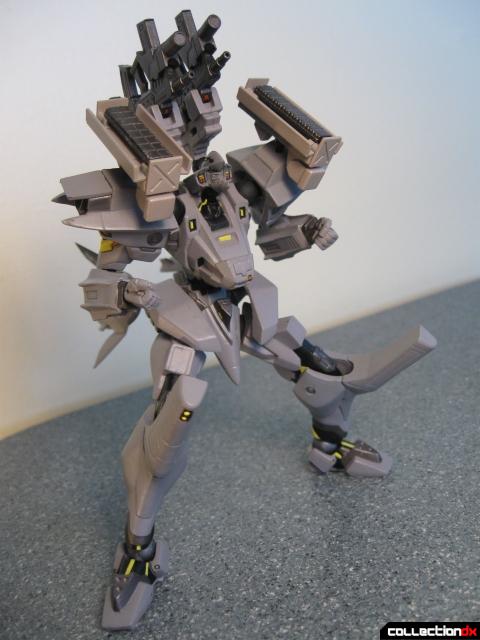 The missile launchers open up in a manner that reminds me of Armored Core. With some guns on the mount pylons you can practice the American mantra of peace through superior firepower. 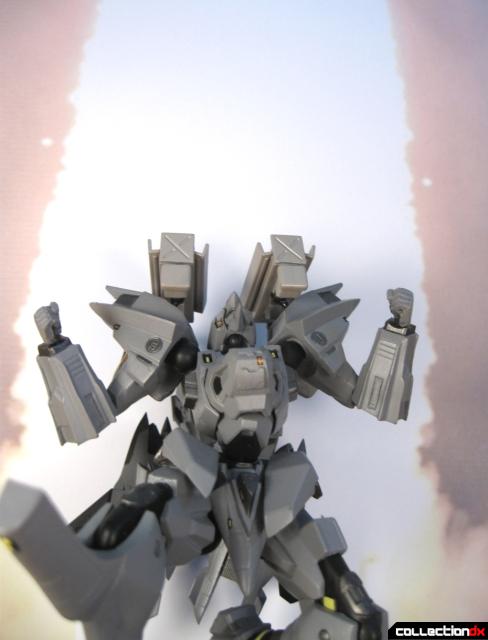 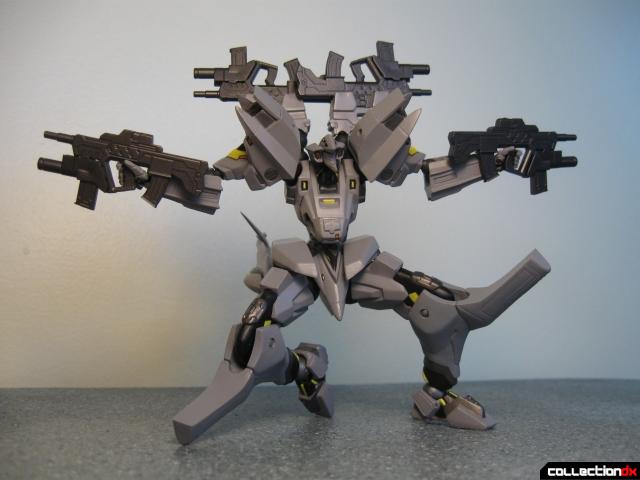 Borrowing a pair of identical guns from my Muv-Luv Raptor let the Super Hornet play the role of "gun sweeper." Bullet hoses are your best friend against hordes of BETA. 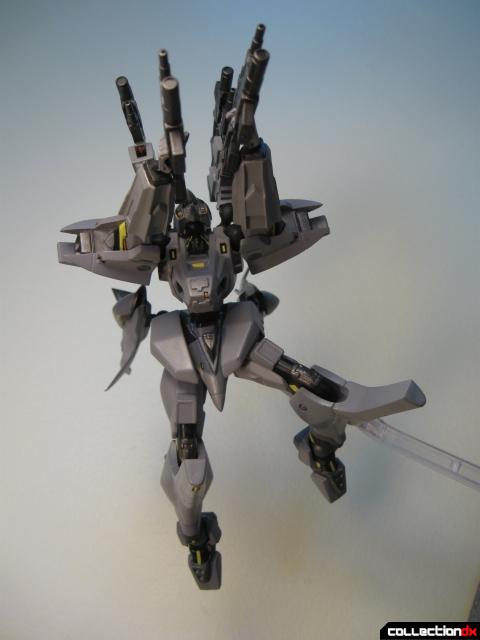 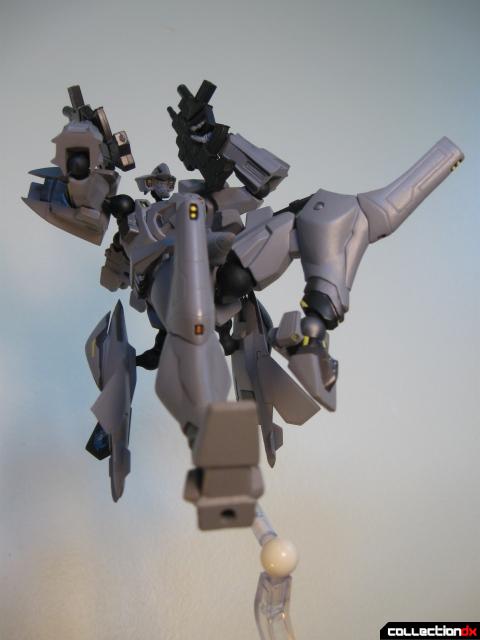 With the stand you can make sure everyone drops. On the bounce, trooper. 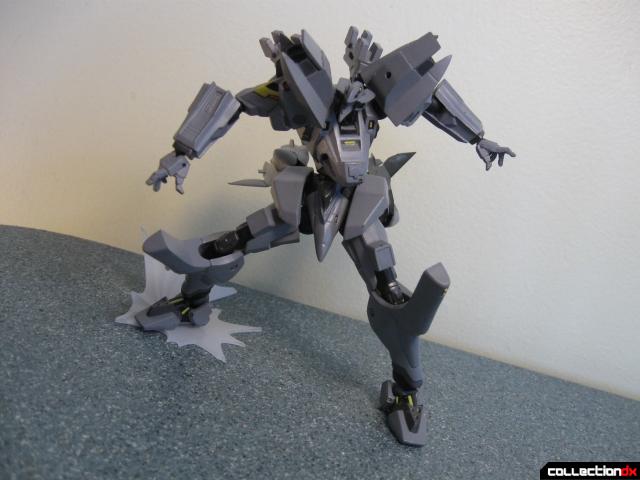 The action stamp serves as an alternate display base for expanding the footprint of the toy with (theoretical) style. The chalky hard plastic never quite fits into the feet with the first try. 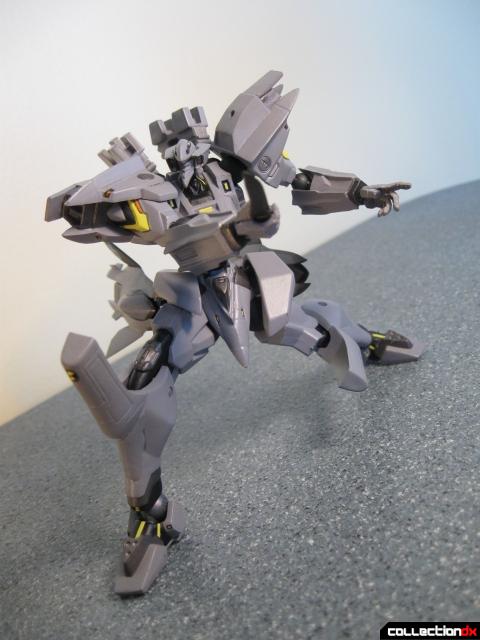 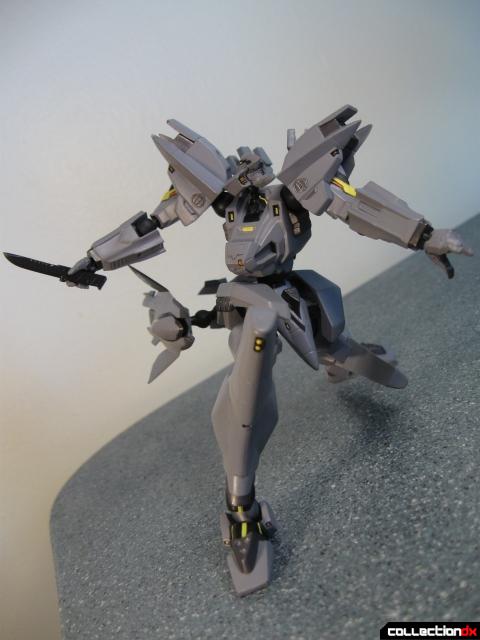 And honestly these figures are stable enough they don't really need the extra help. That knee guard is mere millimeters above the ground! 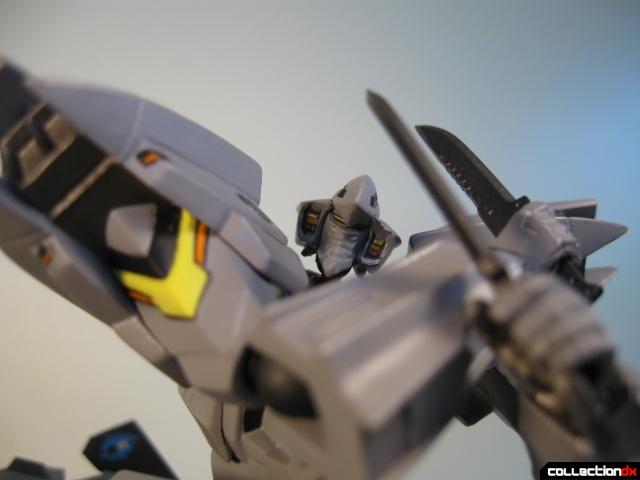 If you don't need the guns, you always have the knives! 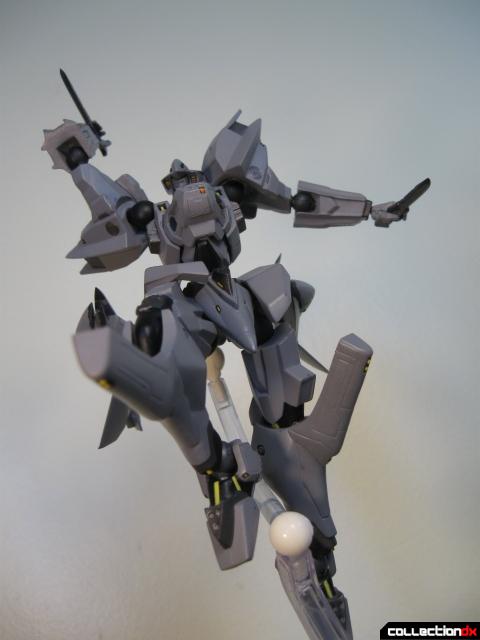 Yeah that's a bit too cheesy even for me. 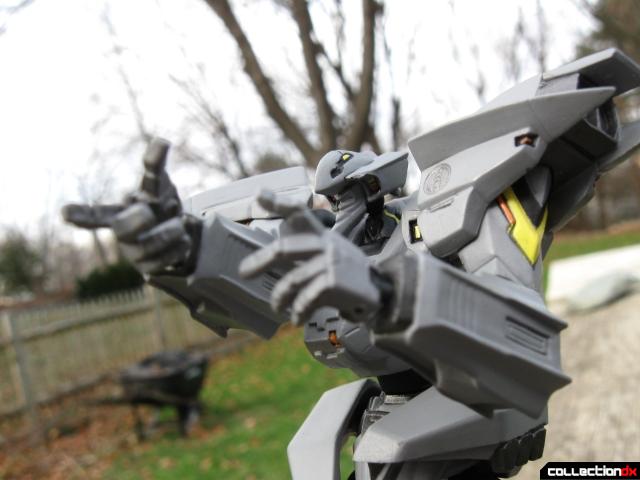 "A Hornet always gets its prey~"

The Muv-Luv Revoltechs continue to be my current toy crack as they remain inexpensive and fairly easy to acquire. These figures are very robust with this one in particular surviving a nasty fall onto a stone walkway when I attempted to take the above photo. There was some minor scuffing on the right shoulder's pointy bits but a little sanding smoothed that away. Even a case of weak ankles was easily rectified by swapping in another pair of Revoltech joints. The Super Hornet and its companions bring the fun whereas other TSF figures are either fragile like Kotobukiya's model kits or are more expensive like the Volks A3 line. With the upswing in interest from the spinoff Total Eclipse anime, I hope Kaiyodo will continue the line. I saw four more being planned but the future seems shaky. Even if it has to end I will still thank these guys for getting me interested in Muv-Luv and all the madness it entails.

Is...is that last picture a reference to MGS3?

I kept waiting for Kaiyodo to completely flood the market with these and snatch up a bunch for pennies on the yen, but it looks like the Muv-Luv revoltechs are basically sold out everywhere. :<

You could try Mandarake where they're selling at less than retail. I noticed some of the old A3 figures are falling in price too. You may even see a review of one in the future :3