When the Transformers Prime cartoon premiered, I was instantly struck by how much I liked the design of Cliffjumper. Of course, he died right away, to be resurrected as a zombie, and killed again.

He was the coolest looking character of the bunch in my opinion, and he got killed right away.

Despite his short amount of screen time, he has had a few toys made of him already. The First Edition version of Cliffjumper was only available in other markets, so I had no hope of finding him at retail in the US. 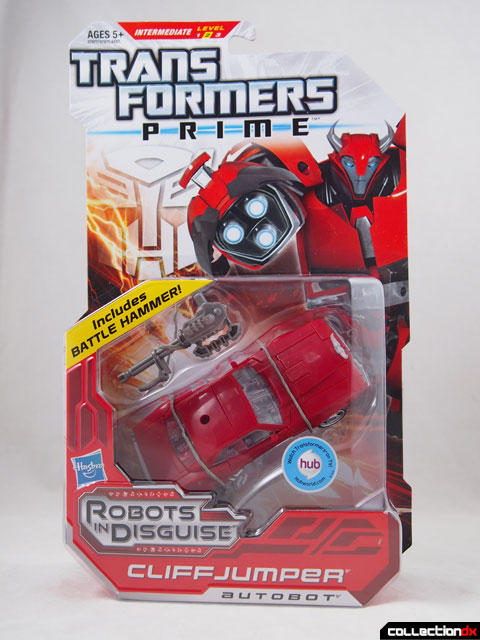 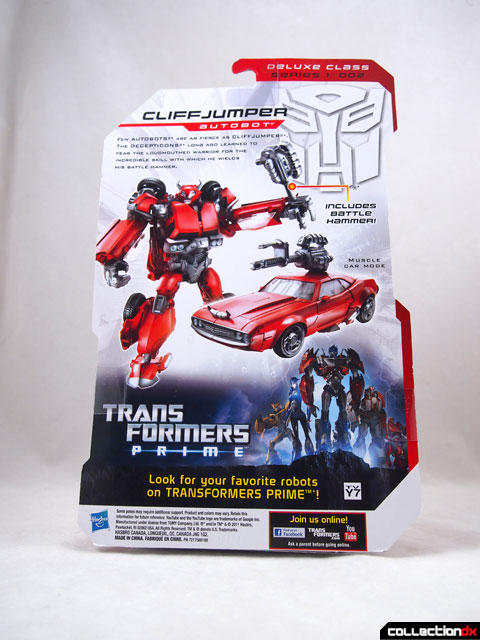 That leaves the regular release Transformers Prime Cliffjumper, which is what I am reviewing here today.
Cliffjumper’s vehicle mode is that of an American muscle car – a mix of a Dodge Challenger and a modern Camaro – with Bull horns on the front. I have to admit, the horns sold this toy to me. 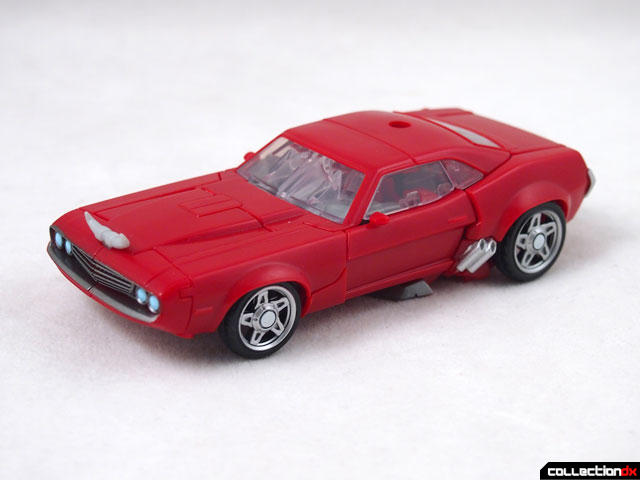 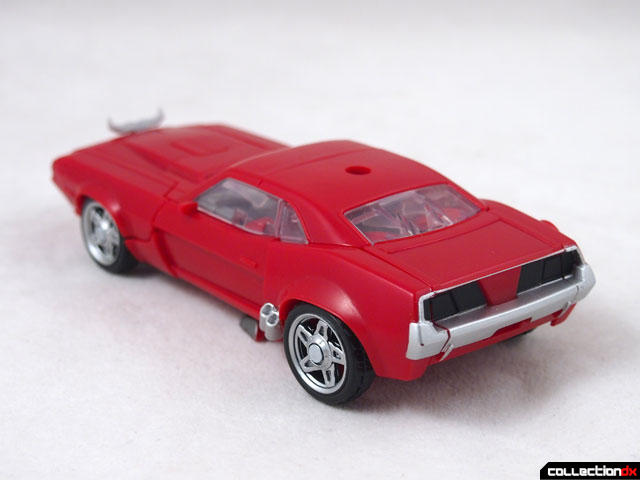 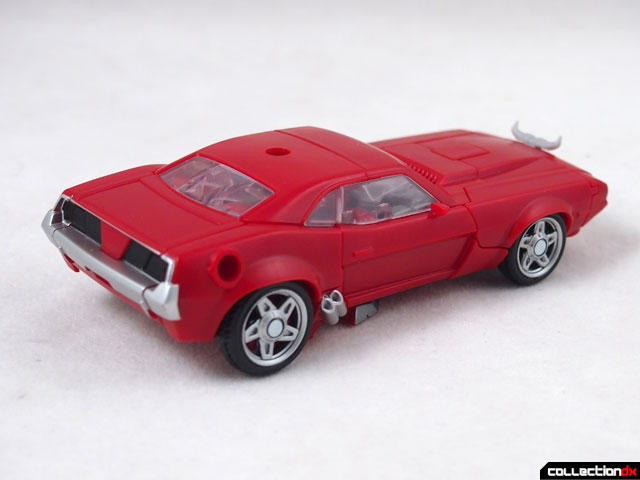 The car mode is pretty clean, with little detail and minor paint applications. Everything lines up well and it hides the fact that it’s a robot reasonably well. The windows are clear and you can see a mess of whatever inside it. The only time you should have transparent windows in vehicle mode is if you have some kind of interior to look at. If you are just going to show a mishmash of parts inside, then make the windows solid, or at least dark. 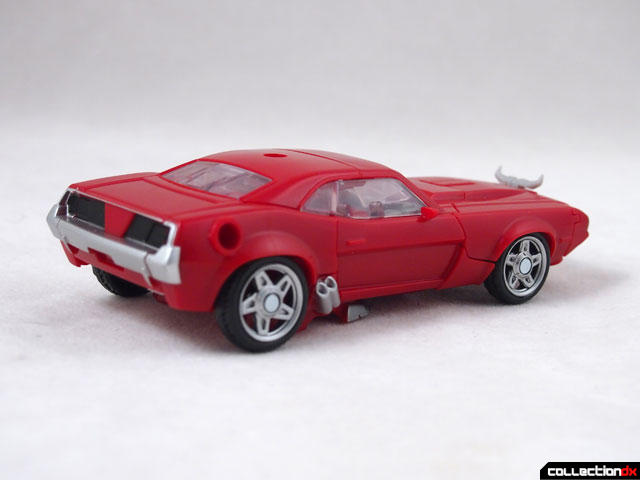 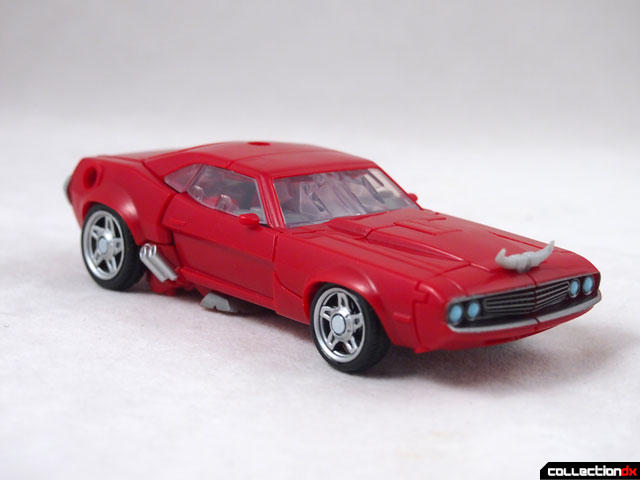 The horns on the front are rubber (thank you nanny state!) and there are connection points on the roof and on the passenger rear quarter panel. You can mount Cliffjumper’s weapons there, or weapons from other toys from recent series as they use a common size peg. 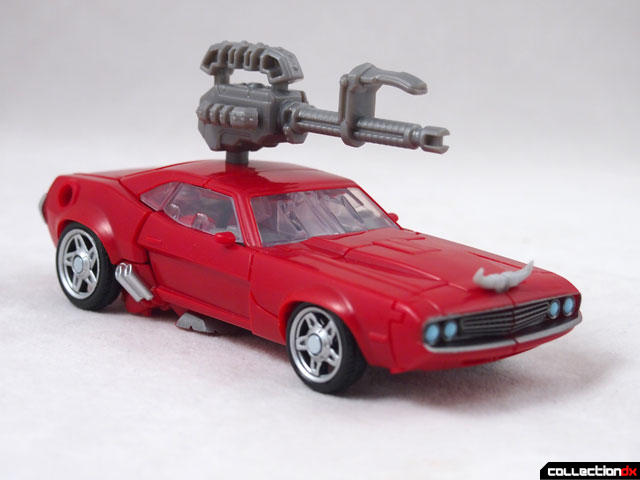 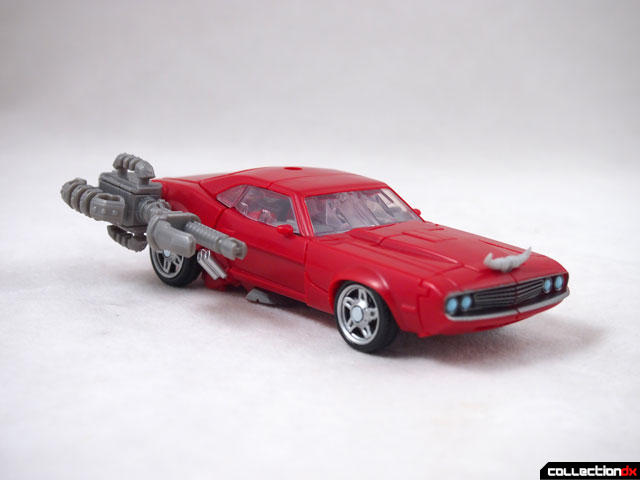 I’m continually impressed as to how the designers come up with unique ways to transform from vehicle to robot. This character is no exception. Watch the video for details, but suffice to say that it is very cool, and even features a geared gimmick in the chest.. 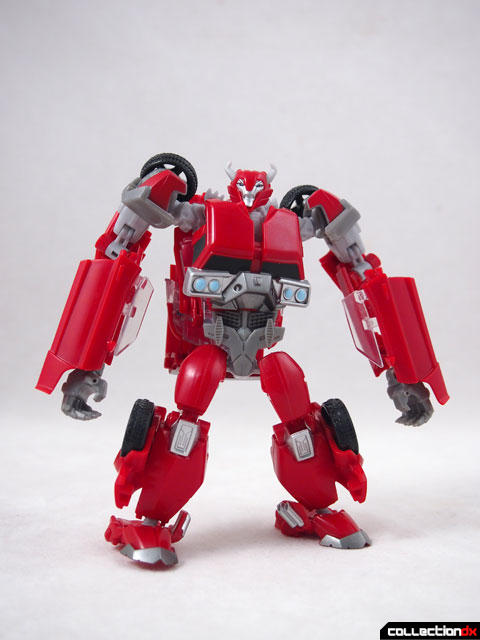 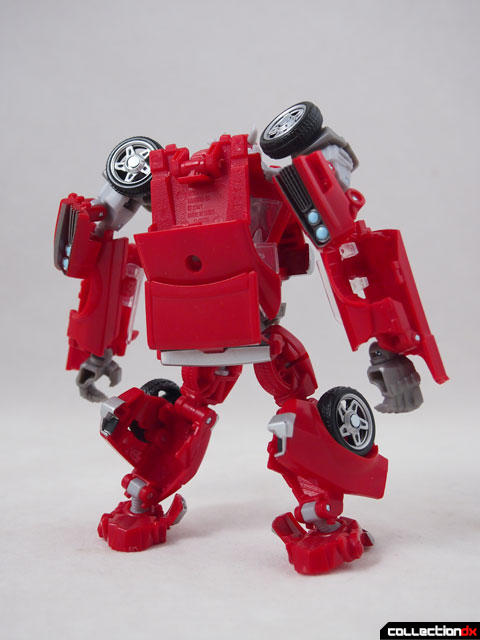 Robot mode looks really sharp, and I actually like it better than the First Edition one. This has less crap hanging off of it, and at this scale, less is more. 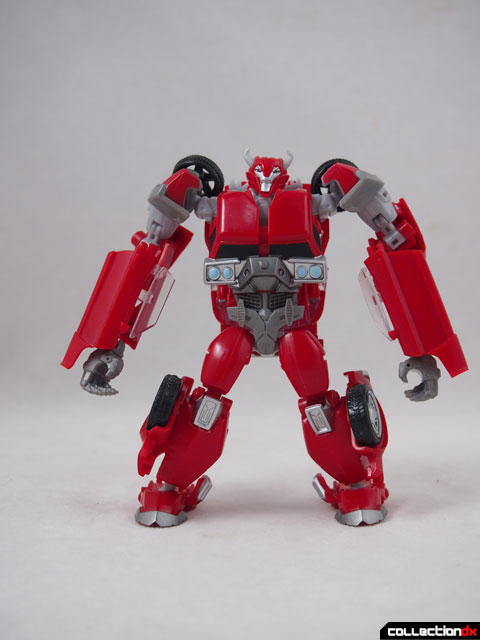 Cliffjumper’s head is on a ball joint, and there is light-piping in the eyes but you have to get the light “just so” for it to have any effect. The horns here are rubber as well.

Each shoulder is on a ball joint with a swivel bicep, hinged elbow, and ball jointed wrist. The lower arms are made out of the door panels on the car, and the two halves are supposed to grip together via a tab, but they just don’t stay connected that well. Also, the hands have a tendency to pop off during transformation.
There is a waist joint (Yes!), ball jointed hips, hinged knees, and the ankles have both a hinge and a ball joint on each. 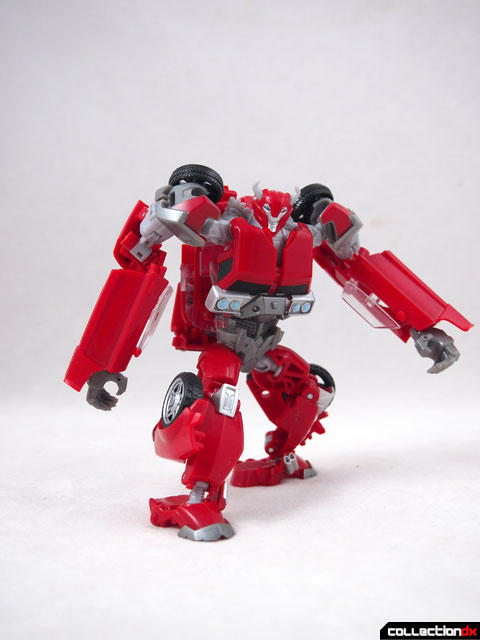 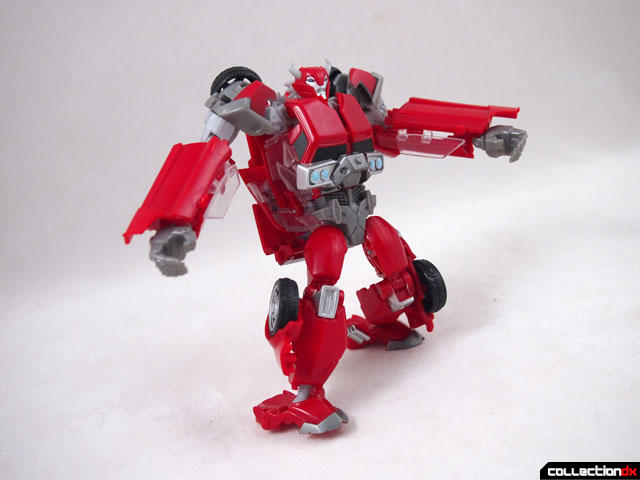 Overall the legs look good, but the wheel sections on the side lack a definite place to be. A tab to lock in place would have been helpful. 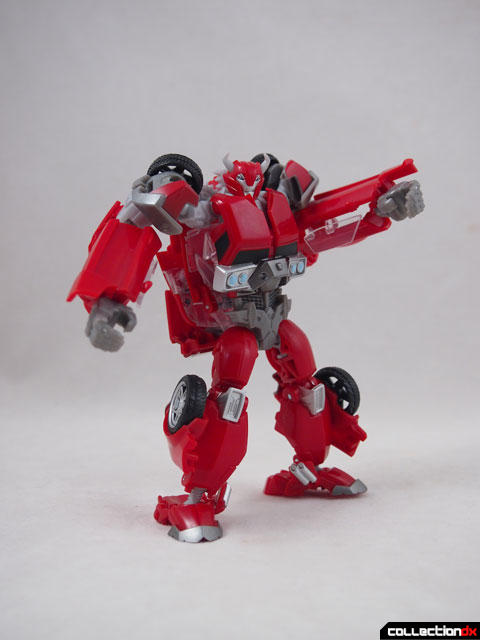 The included weapon is a Battle Hammer used to club the crap out of Decepticons. It can also be held as a gun if you like. 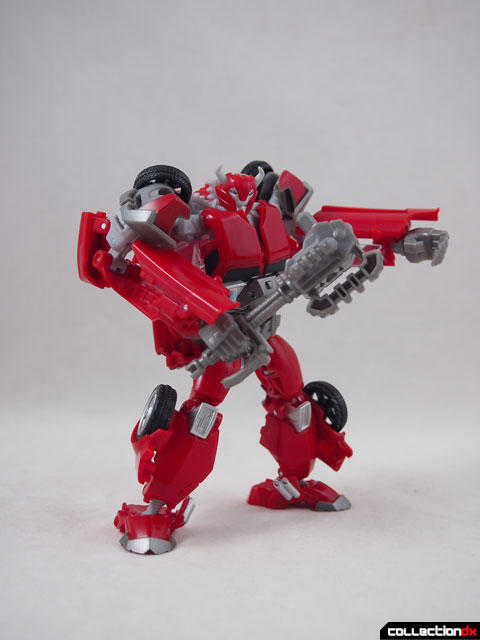 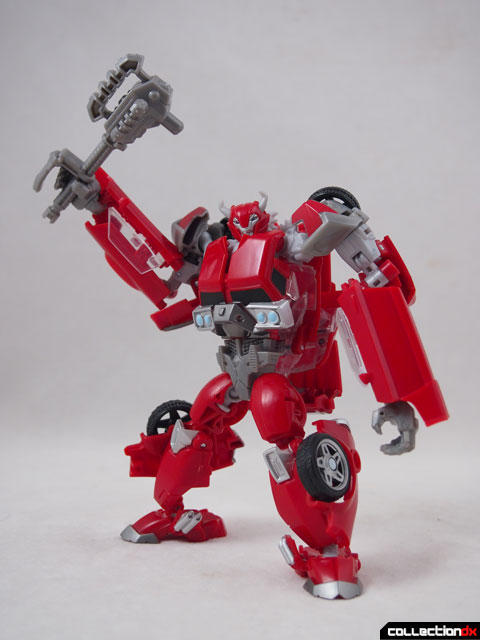 It’s a decent figure with minor transformation issues and a great look. I told myself that I would stop buying Transformers, but somehow they have pulled me back in for the time being.

Dont worry Josh, Im right there with you. With these new Prime figures I find myself always picking them up in the toy section. I dont normally care for most TFs but for whatever reason as you stated these guys have nice appeal. For the price and what your getting there not bad at all.

I hear yah I'm in the same boat I totally thought I was all but done with transformers and have even began selling off my movie and cybertron figures and am still planning on it at my next toy convention.. but when I first saw Prime I was like ok you got me again. I will say that the first edition Cliff Jumper like all the other first edition figures are far superior in show accuracy and design and it puts the Robots in Disguise figure reviewed here to shame. Other than the reissued figures the lines are exceptional I look forward to figures to add to my reborn transformers collection such as the voyager DreadWing.

Hey Josh, i wouldn't worry about how much is known about Cliffjumper since he dies in the very first episode of the show :P. But i do agree with you, he looks pretty cool, especially in vehicle mode.

I've been out of the TF collecting loop for a while also, but I think these figs are pretty nice.
I usually only get the token Optimus fig from a line but this time I passed.
I'm more interrested the other players this time around.
I've got this fig and like it a lot.
Just wish his hands could form blasters and not just carry his hammer, or at least he came with a gun.
Looking to get Wheeljack and a few of the Vehicons to mix it up with.

So, I am not as serious or as experienced a toy collector as many people here, and of course, everyone is after certain things. But, having sampled many lines, from Revoltech to Figuarts, MG models to CM's high end diecast wonders, there is one conclusion I can say with some certainty.

For their price, Transformers are the best money you can spend in terms of overall quality and engineering mastery. What designs you like, what colors are best, which lines rock your world, that varies... but the sheer THOUGHT and effort that goes into a $12 deluxe is at least comporable to a $40 SRC release, though clearly there is a world of difference in materials, paint and presentation.

For me, as someone who adores the engineering of a toy, how well it does what it does, how solid, how interesting, they are a wonderfully inexpensive alternative to Yamato Valkyries and those HUGE SOC releases that would no doubt blow my mind if I could afford them.

So, yeah, I still like Transformers... though I will admit there are SO MANY OF THEM that they can dominate your life if you let them.

Sorry for the sudden rant, it was an opinion I've long held and the talk of people saying 'yeah, I gave up on Transformers toys' sort of made me want to share the it.

100% no need to apologize for your well thought out and intelligent post.

I have long since given up on TF but these are really cool and it's great to see them continue to do great stuff.

oh no, TF fever has hit you Josh. I was gonna send one of these out to you cause we didnt find it that day we went to TRU and they seem to be popping up now.

My favorites in this line are Soundwave, Wheeljack and Ratchet who I thought was going to suck. The First Edition Arcee is really good, havent opened the RID one yet. If you like Cliffjumper you will love the others as he is only a couple of notches above the Bumblebee which is horrible.

I picked up arcee, soundwave and Ironhide, but that will probably be it... until Zombie cliffjumper.

I have to agree with the rest: I'm trying to cut down on Transformers, but Prime is making it hard. I've already bought a few of the small ones to try and sate my interest, but the larger ones are just so cool. I bought Wheeljack and Soundwave so far, and I love 'em both (Soundwave especially). Cliffjumper here has been calling to me every time I see him in the store...and this hasn't helped matters.

Part of it is the bright colors 'n such. I like TOYS, so I like to see bright colors and wacky and interesting designs. The movie figures get that sometimes, but mostly they're dark and realistic (as much as you can get with transforming alien robots). These have that wonderful animated flair that I love so much, and I'm having a hard time staying away from them.

As I said in your previous Transformers review, you should get DOTM Laserbeak. If you still don't like, you'll have me to blame.

The only Prime toy I wanted is the first edition Starscream and it's gone and I'm not paying $40 for a $12-15 figure. Oh well.

I found the designs kinda cool, but too complicated.
They tried too hard for the alien asthetic I think.

But IMO, these prime figs go back to the days of simplicity of being based on a TV show, and not a big budget film.
So the designs have the advanced tooling but retain ease of transformation, durability, identity and a good price point.
And that's why I grabbed the couple I have, I hope the show and toys keep going and give us other awesome characters from the mythos. . .