In Accel World, there is a mysterious program known as Brain Burst that allows players, known as Burst Linkers, to duke it out with one another in the cyber-arena. The prize for winning these battles( and also defeating monsters) are Burst Points, which can be used in the real world to perform a Brain Burst; a cognitive-raising ability. This Brain Burst ability gives Burst Linkers a distinct advantage over normal humans, which is why Burst Points create such a fierce competition between the Burst Linkers.

In the show, the main character, Haruyuki, is introduced into the world of Brain Burst by they mysterious Kuroyukihime. As it turns out, Kuroyukihime’s avatar in the Brain Burst world is the Black Lotus (ブラック・ロータス, Burakku Rōtasu), which is the subject of this review.

The Figma Black Lotus appears menacing with its dark paint scheme of black and purple, and its very point limbs that look like they could easily poke an eye out. 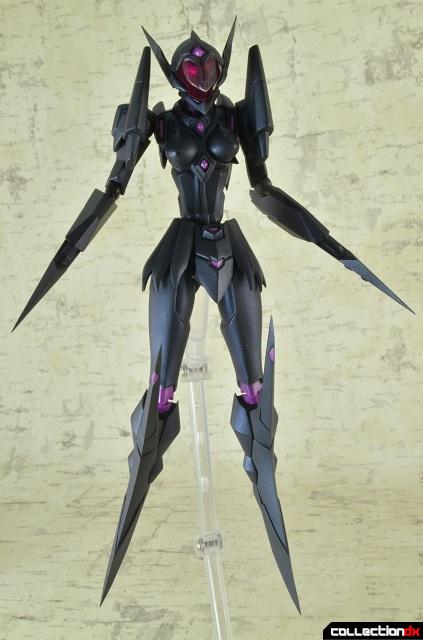 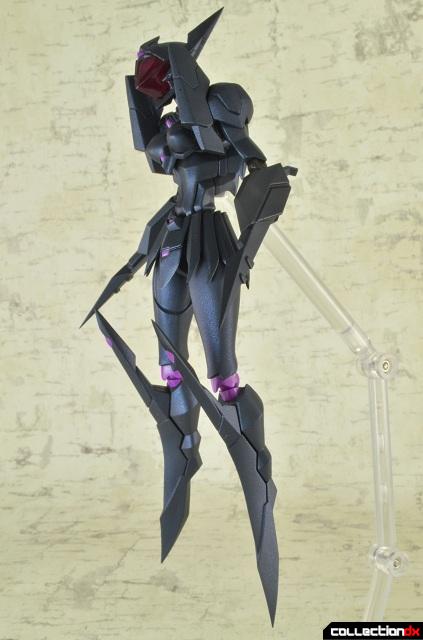 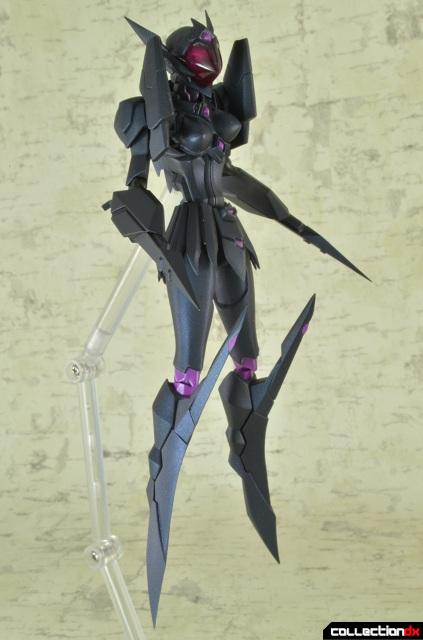 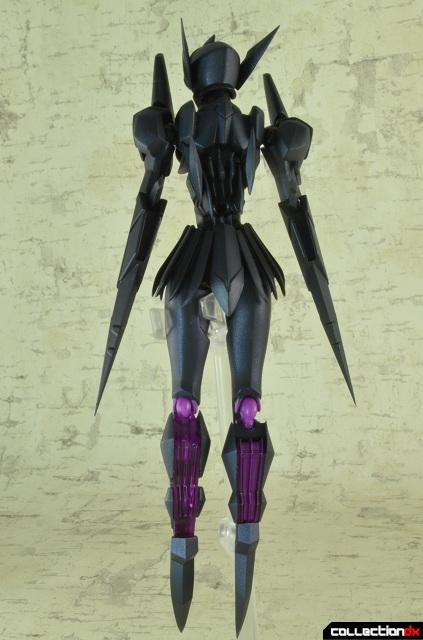 And things only get deadlier looking when the Black Lotus goes into its combat mode. For this mode, Max Factory has included a separate head, legs, front and rear piece of the skirt armor, front half of the arms and shoulder pads that can be swapped out very easily. 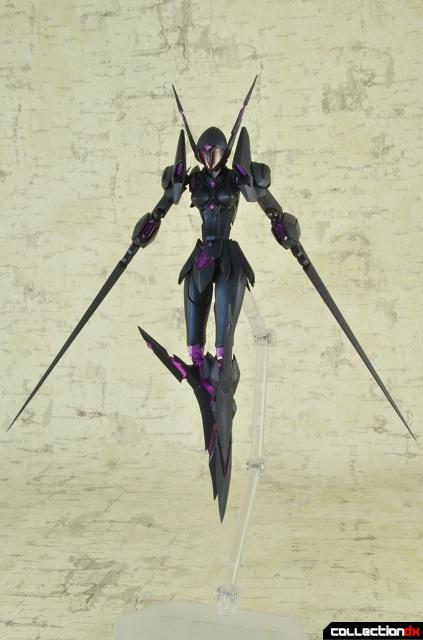 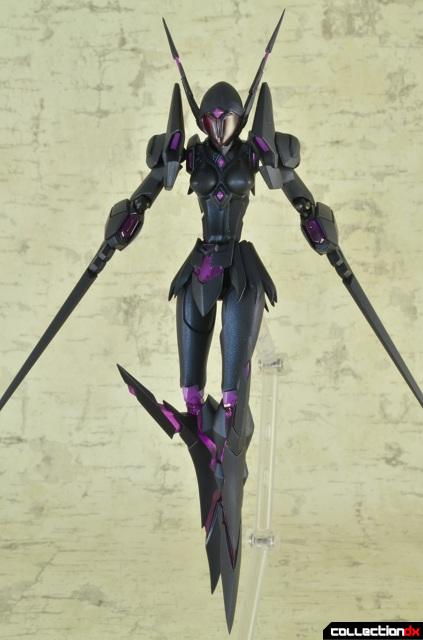 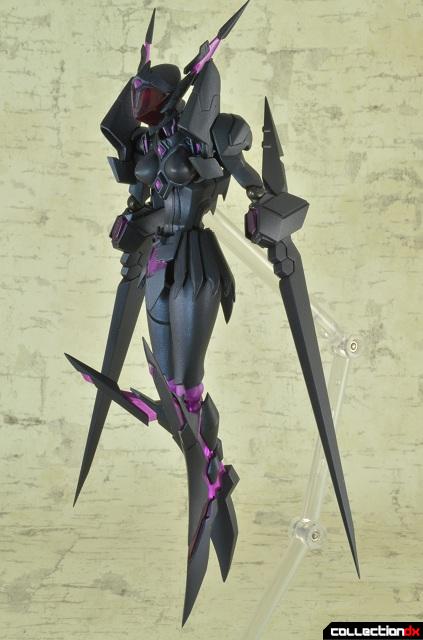 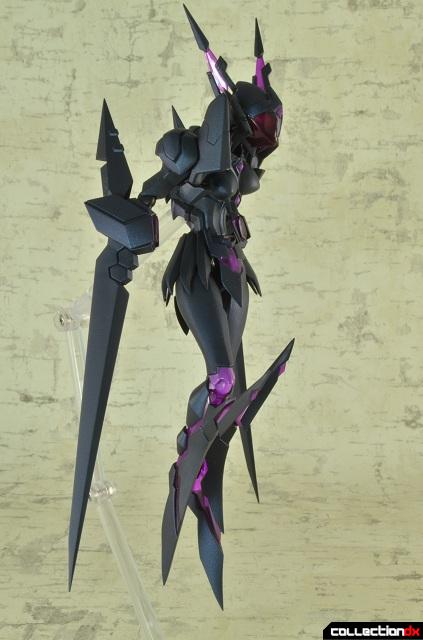 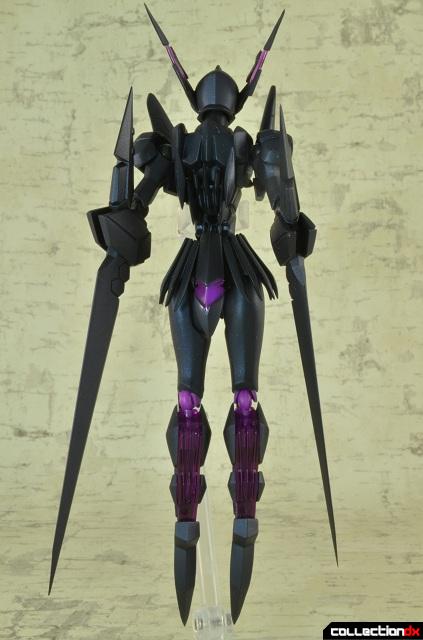 Now you REALLY wouldn't want to mess with this femme fatal! 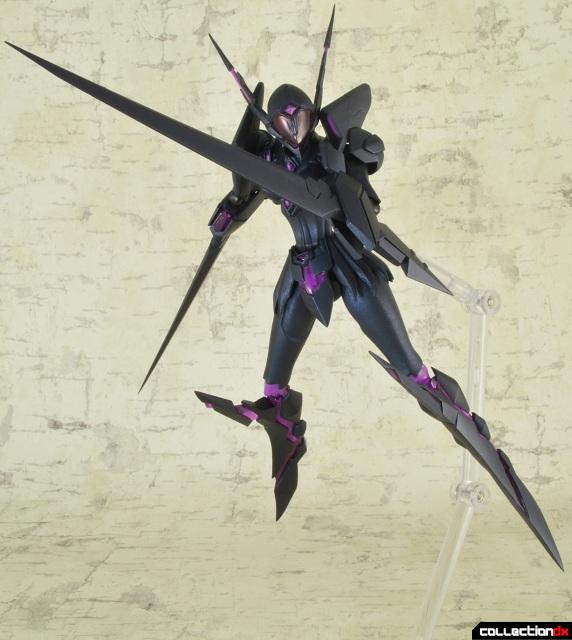 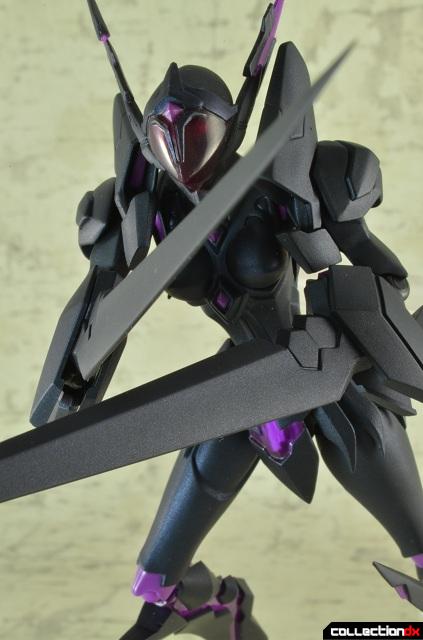 In this mode, the many of the avatar's features are extended. The raised panels on these parts reveal purple bits hiding under the fram of the Black Lotus. This feature reminds me of Unicorn Gundam’s panels, which also extend out.  The purple parts on the legs and ears are made of a clear purple plastic and you know what that means: Light piping! 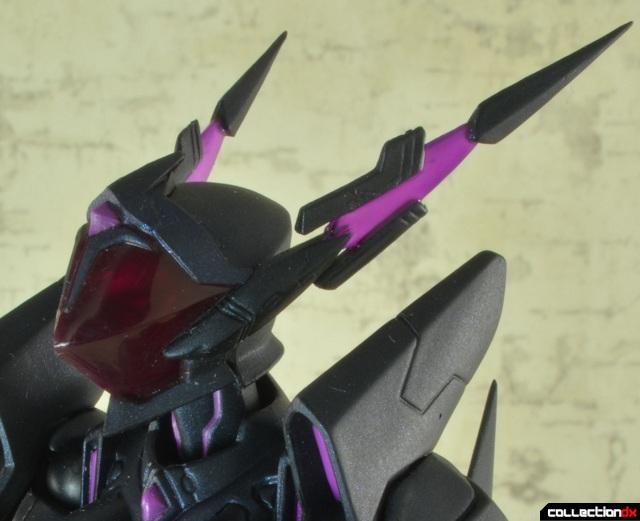 The light piping effect is at its most majestic in the legs because there is much more of this clear plastic content on those, which when hit with a good amount of light makes the legs look as if they were surging with power. 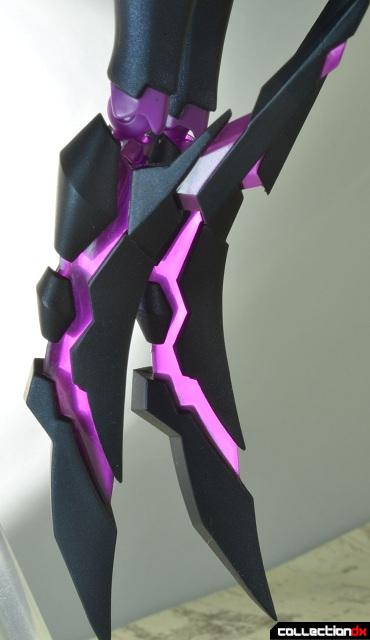 The overall design of the Black Lotus does a great job of balancing the appeal of the female form, with the deadly aethetcs of the high level fighter that the Black Lotus is. 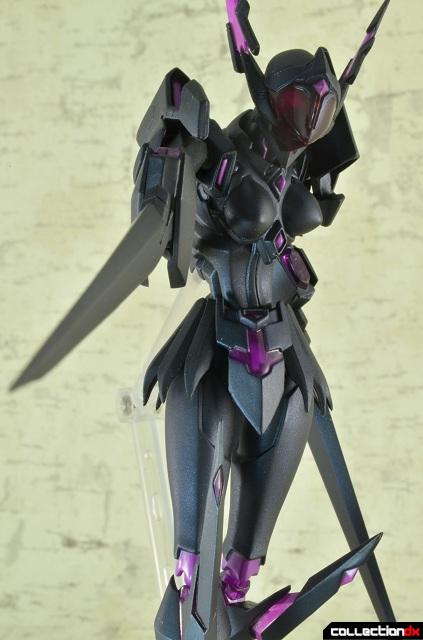 With the Figma Black Lotus you get a lot of the joints you would expect from a nice action figure: ball and socket head, abs crunch, waist joint, double jointed knees and elbow, ball and socket shoulders and thighs (which have a swivel of sorts).  The skirt of the figure is made of soft PVC, which stretches out to accommodate the movement of the legs. Also, the shoulder panels are on their own ball joint, which allows them to move independently of the shoulder. Finally, the small blades on the elbows of the figure can be moved about 90 forward. 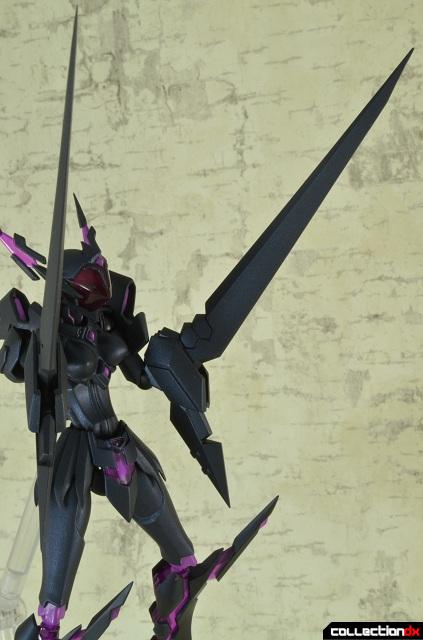 IM GOING TO PINCH YOU! ... IF only I could move my blades closer!

This all means you can get some great poses with the Black Lotus! 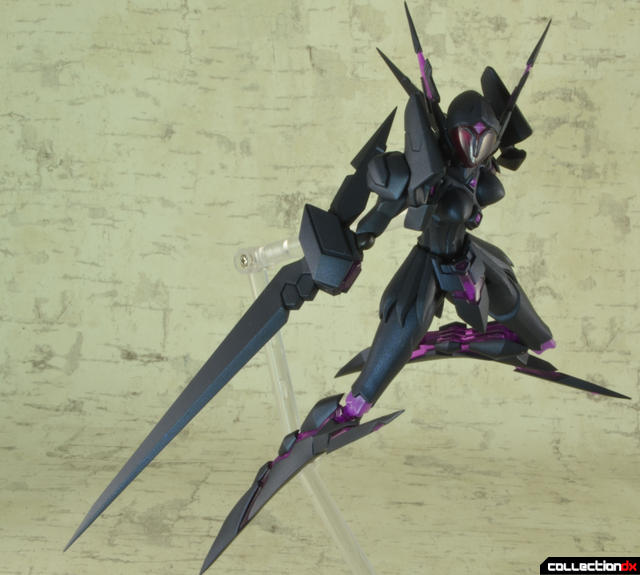 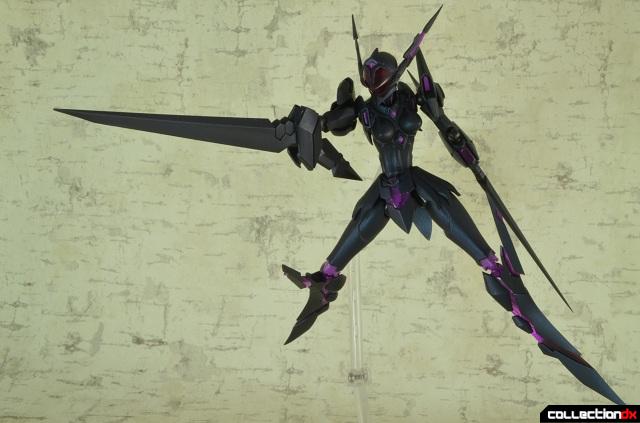 As for extras, this time around there is no extra hands with this Figma release, as Black Lotus has no hands.

The Black Lotus does, however, come with a Figma display stand with an extra extender piece. Obviously with a character such a Black Lotus, which lacks any real feet, a display stand is going to be a must for showcasing the figure.  The fit between the peg of the stand and the hole on the back of the Black Lotus is a bit tight and requires some pressure to get the peg into the hole. At first I was a bit worried about applying too much pressure during the process of attaching the stand to the figure, since the Black Lotus has a relatively small frame that looks like it could easily break. But as it turns out, the Black Lotus is a tough as the character it is based off. 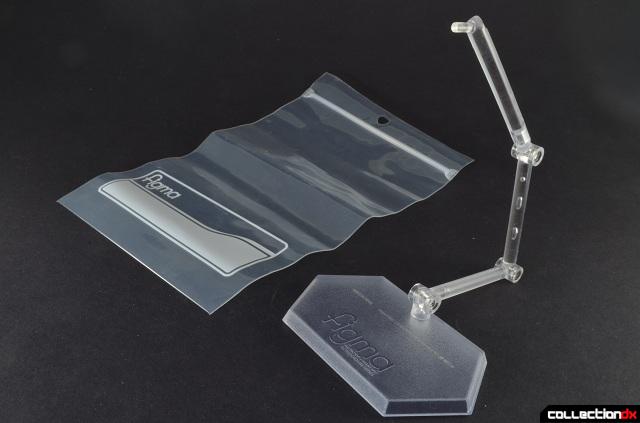 Besides the stand, Black Lotus comes with a signature Figma Zip lock back to store all of the parts for the figure or a small sandwich that you could take to work as a snack. 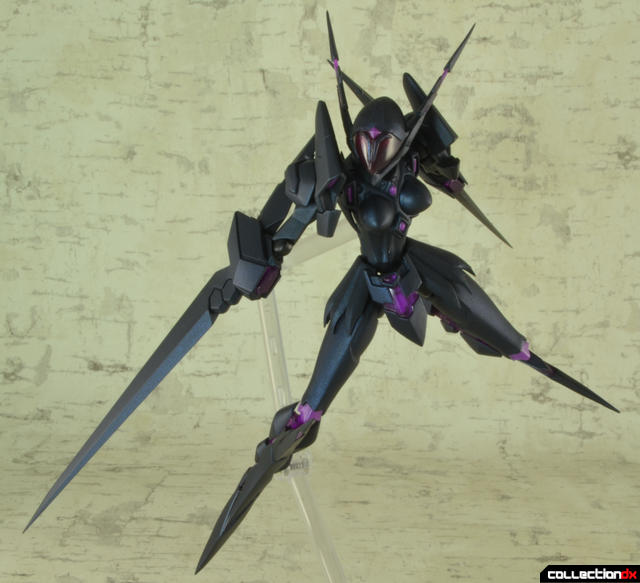 The Black Lotus is a great combination of sexiness, deadliness and affordability. It is very fun to play with and pose. The only issues I had with the figure were that the removable pieces on the skirt armor will fall of once a while and the fact that since the Black Lotus is well black, dust is pretty very noticeably on the figure. 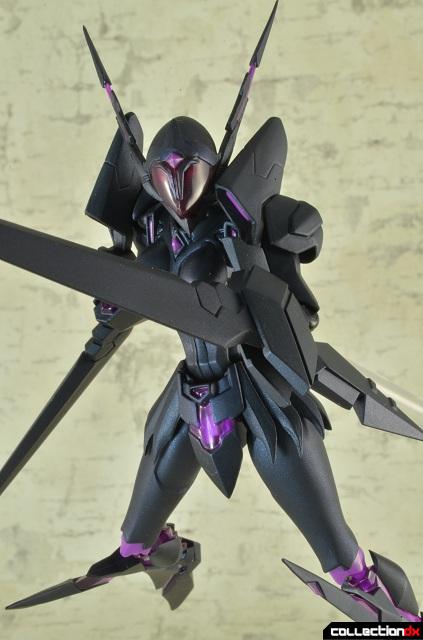 awesome review. this figure looks wicked. i might just have to dive in and get one. more because it reminds me of Kaiyodo's virtual on cyber trooper cypher figure with all the pointy edges and mangeta colored plastic. thanks for reviewing.