My familiarity with the Brave era of anime begins and ends with GaoGaiGar. I’ve really enjoyed what I’ve seen, and the mecha designs are inventive and fresh even fifteen years on. I defy you to watch the opening and not have “GA GA GA GA GA GA Gao Gai Gar!” stuck in your head.

Volfogg is a ninja police car transformer who assists our heroes. He combines with a couple of smaller Gun Machine mecha to form Big Volfogg. While Volfogg isn’t as well known as the Ryu Twins, the character design is solid, and it’s nice to see him get the SRC treatment.

The box is typical SRC fare, handsome and foil embossed. 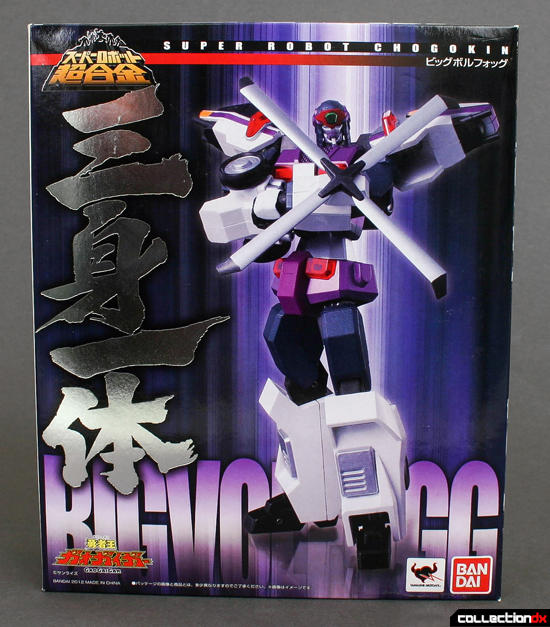 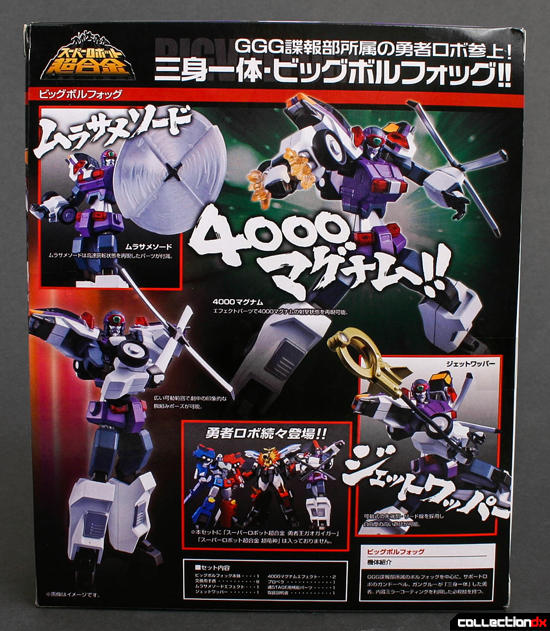 The set is fairly minimal, with a stationary prop, a whirring blade effect (‘Murasame Sword), flying hook (the ‘Jet Wrapper,’packaged separately and not shown here), gunfire effects for the “4000 Magnum” gun, and variant hands. 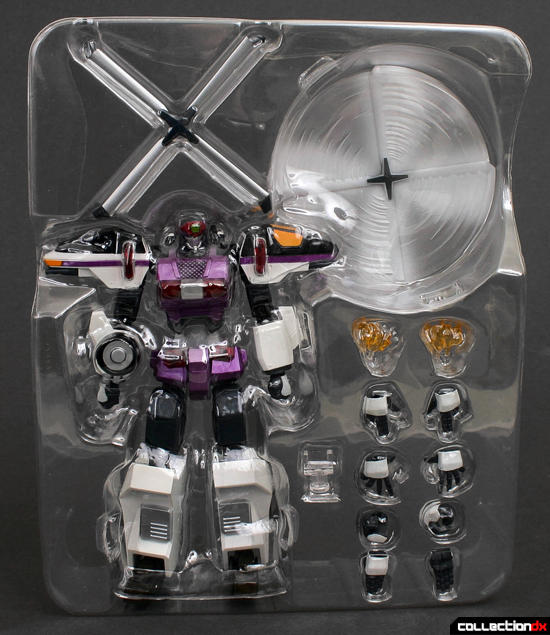 The figure itself is dynamic, with great proportions. The sculpt feels like a Revoltech. The articulated chest gives the figure real attitude. As we’ve come to expect with SRC releases, the fit and finish are beautiful. Everything is very tight and precise. 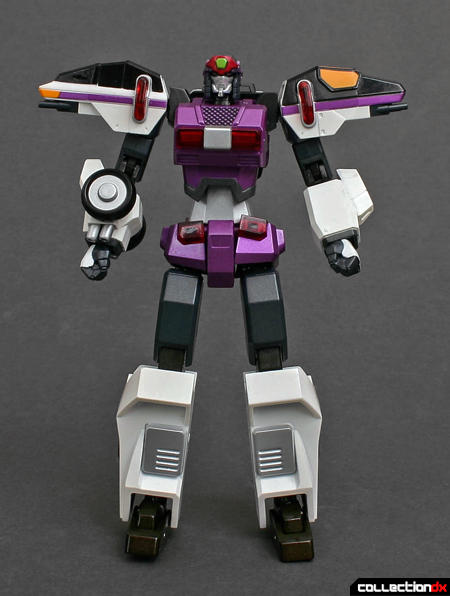 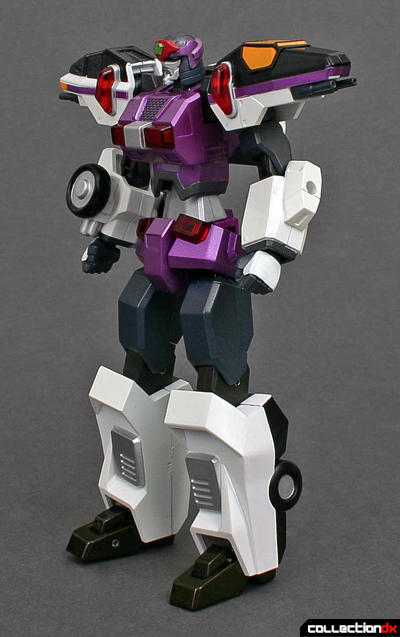 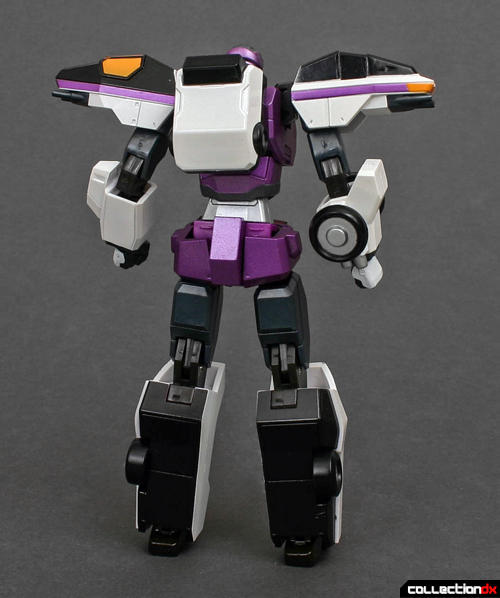 Metal content is disappointing. Only the feet and thighs (including the joints) are diecast, though there may be some concealed metal in the lower legs. 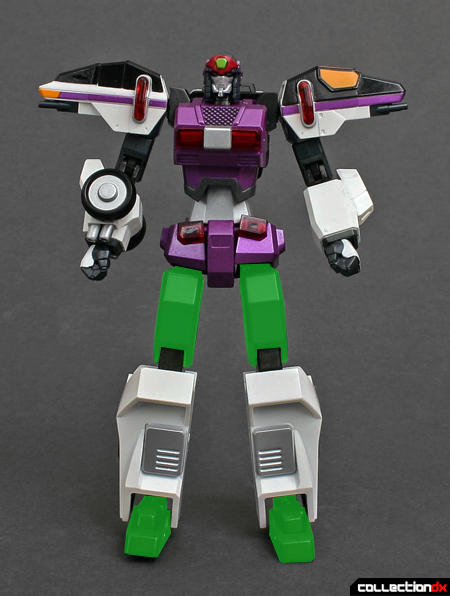 Posing is respectable but not stellar. The helicopter blade limits arm posing. The balance of the figure is off. The previous SRC figures I’ve reviewed have been tanks, sturdily holding any position. Big Volfogg is more precarious. He still looks great, though. 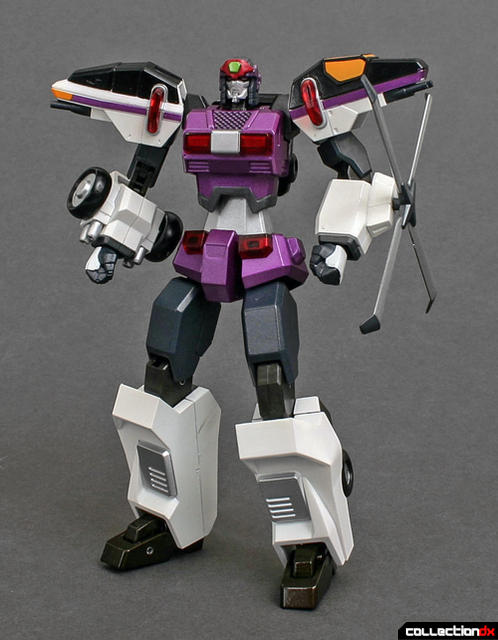 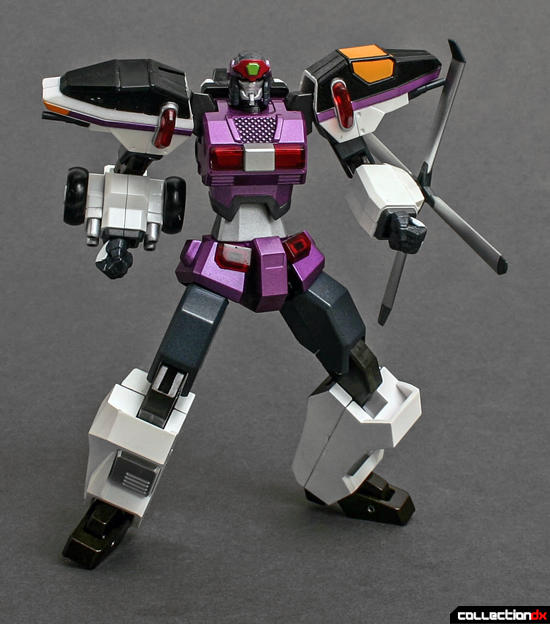 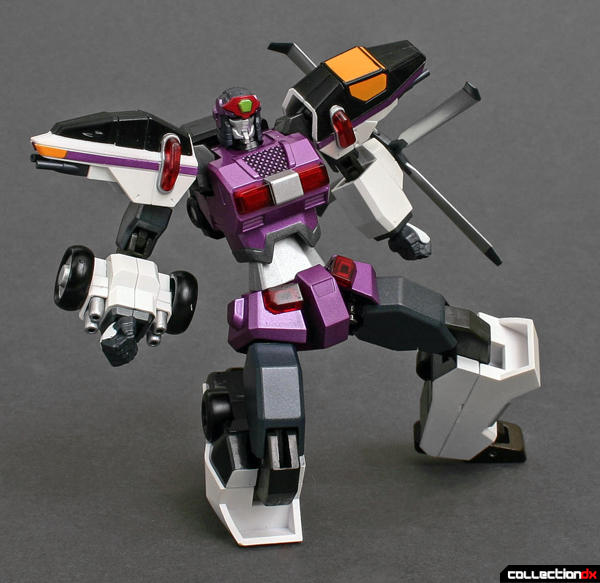 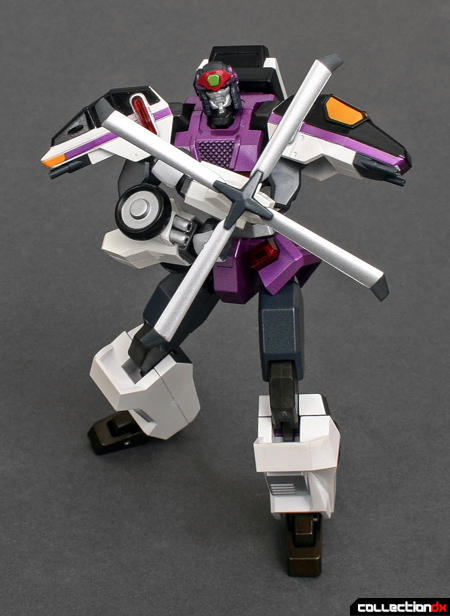 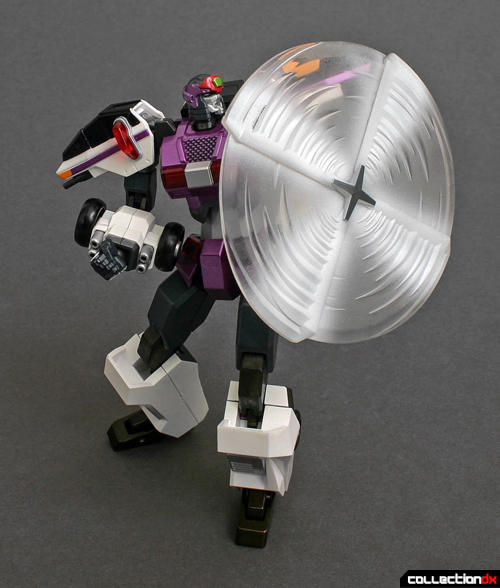 4000 Magnum. This is a neat effect. I like how the car’s tailpipes become a gun. 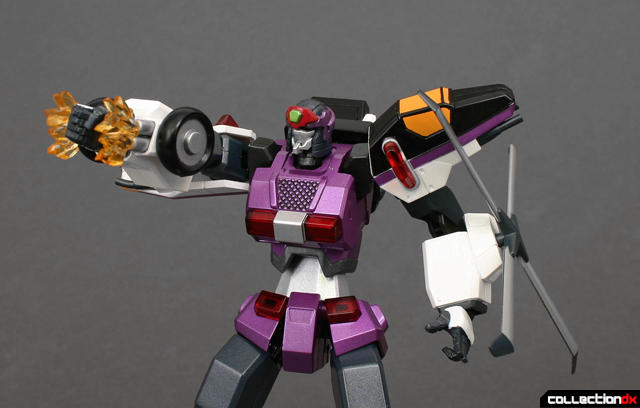 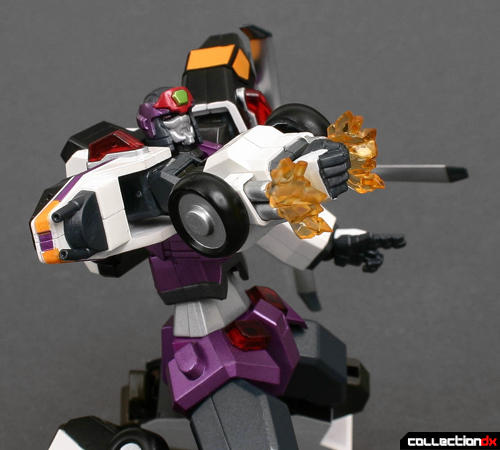 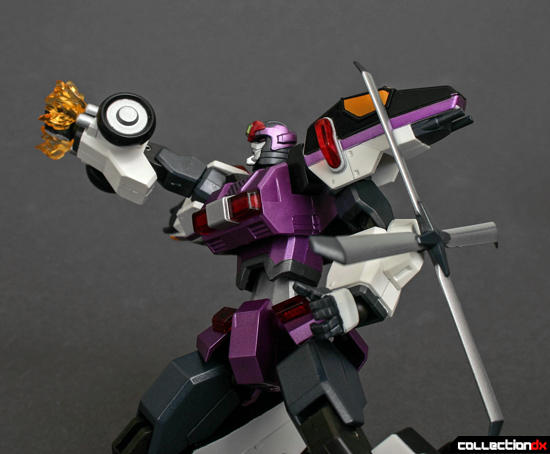 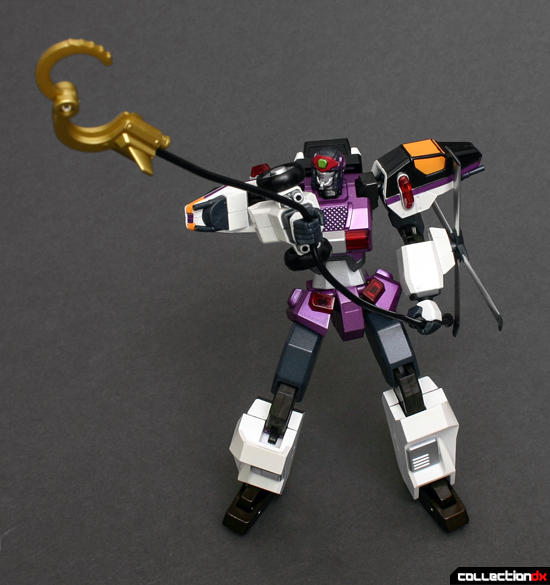 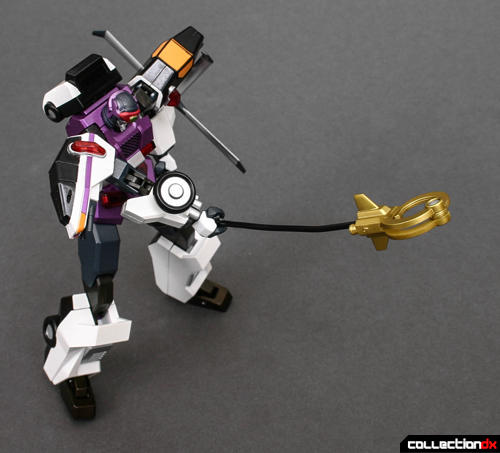 A worthy realization of the Big Volfogg. High quality, good looking, but some more heft would go a long way. 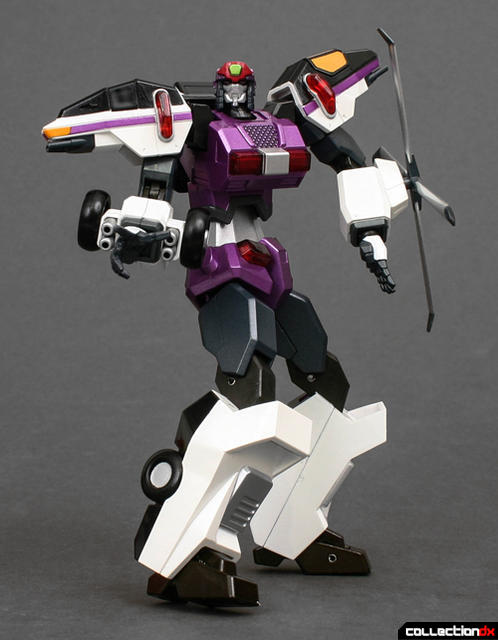 that was a good aesthetic choice to use a gray background and bring out the white armor of volfogg.

i am a big, big fan of the show (right up there with screaming super robot classics like gurren laggan, gunbuster and getter robo: armageddon), but i have a hard time getting into figures that are clearly designed to transform, but do not transform. "oh look, there's an errant wheel." "hmm. it's hard to brush my teeth with this helicopter blade sticking out of my arm." and in the case of volfogg, it's not a terribly complicated transformation.

i remain surprised how many people want inert versions of modern toys that were designed from the beginning to transform...especially when they were already produced in such versions.

In my case most of the modern transforming mechas have alt modes that don't interest me at all. For example SRC GaoGaiGar, I love the main mecha design, but don't feel like I need the Gao Machines which on their own don't impress me enough to warrant going for the CM's version, especially when its less anime accurate. Nowadays the only transforming toys I want are from Macross.

As a fan of transforming robot toys I can wholeheartedly concur with your statement, but we need to accept the reality that unless your transforming robot was designed by Kawamori, an articulated transforming figure of it will be either stupid expensive, very flawed or both. The Masterpiece Brave line was a noble effort but it still had to sacrifice leg articulation for transformation accuracy and the line up and died after two releases only. So you can either grab a nicely done non transforming version of your favorite Brave robot or wait for CM to release a Brave Gokin with hit or miss quality. I wasn't terribly excited for the SRC GaoGaiGar but my dismissal turned to pure love when I actually held the figure in my hand. This line is just that good.

according to Wikipedia Volfogg, HyoRyu and EnRyu are getting releases.
If that is true that means that FuRyu and FaiRyu will probably Tamashii web exclusives.

I'm not really a fan of Big Volfogg he seems asymmetrical in a bad way.

I still hope for normal Volfogg, somehow I liked his standard form more.

To me this guy is one of the weaker SRC's. And his smaller normal Volfog form SRC is a much better piece. Big Folfog just feels kind of light and plain. The helicopter blades are pretty much fixed position which makes the figure awkward. he is a Transformer that doesn't transform even though he feels like he should. But his articulation and details are kind of sub par for the SRC line. Not bad, just not as good as most other robots. Just a "meh" offering. Completely unexciting.