The Animage is an "original" model kit like from the early 1980s by Arii.  The plamo (plastic model) scene was just beginning to explode with the success of Mobile Suit Gundam, and Arii wanted a piece of the action.  Many design elements were liberally lifted from then-popular series like Gundam and later Dougram with the Animage Part II line, but with sweet tank turrets in place of heads.  There is an entry for The Animage on the Japanese Wikipedia that is worth skimming over even if the translation is a little rough.  Thanks to VF5SS for helping with the Japanese to find the Wiki page. 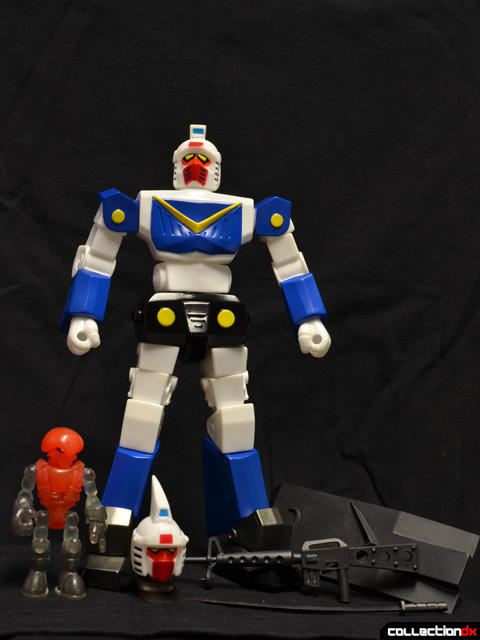 The model kits are pretty goofy and primitive now, but they have a bit of a cult following and seem pretty difficult to find.  There must be more than a couple fans, because Japanese vinyl manufacturer Gigabrain, a subsidiary of Marmit, recently released the first in a line of Animage sofubi figures.  Their first release is what I believe is the hero machine from the series, Battle Armor Suit Bisson. 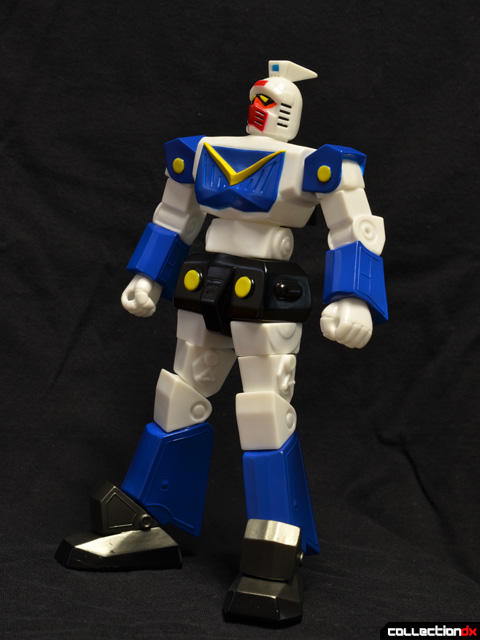 Bisson stands around nine inches tall.  The package lists the figure as 1/100 scale, making it slightly taller than most RX-78-2 Gundam renditions.  Also included in the package are an alternate head, and a gun, sword and shield cast in black resin. 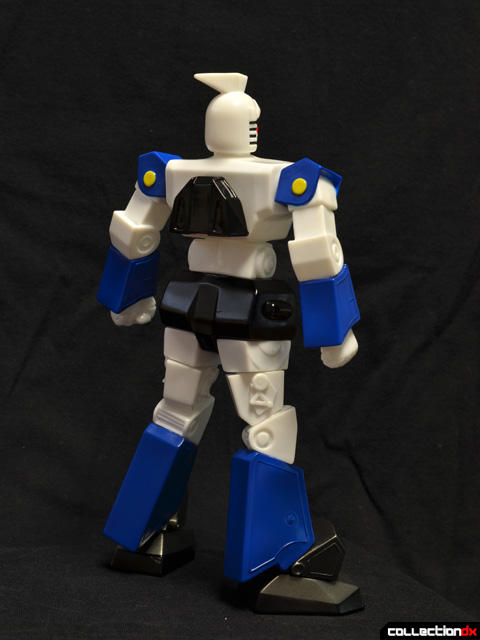 The sculpt is sharp for vinyl, with a lot of hard edges that really sell the mecha look.  I was a little disappointed with the actual vinyl itself, though.  The vinyl is pretty thin, giving the figure a very lightweight feel, and allowing a lot of the flat surfaces to bow a bit.  The warping gives the otherwise sharp sculpt a doughier feel than I would have liked. The paint is also excellent for a soft vinyl.  Everything is either masked or a separate part, or both.

You may notice that there are a lot of parts and cuts apparent on the Bisson.  Gigabrain has released some really innovative soft vinyl figures over the years.  They are known for pushing the envelope on articulation in vinyl figures, and Bisson does not disappoint. For a soft vinyl figure, Bisson can MOVE!  Everything is cut at an angle so it can move in more directions that one would expect.  Gigabrain uses what is effectively the vinyl equivalent of the monoshaft system to make their figures far more articulated than most other sofubi toys. 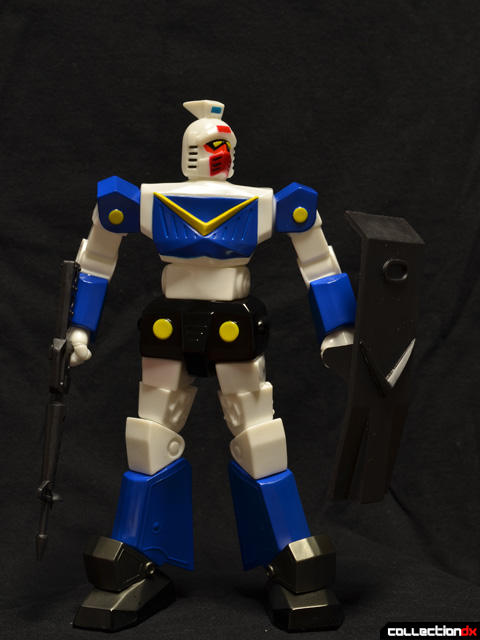 The hands have holes drilled out to hold the accessories, which are great.  The crazy modified space-M-16 is just the right level of weird for this barely original design. 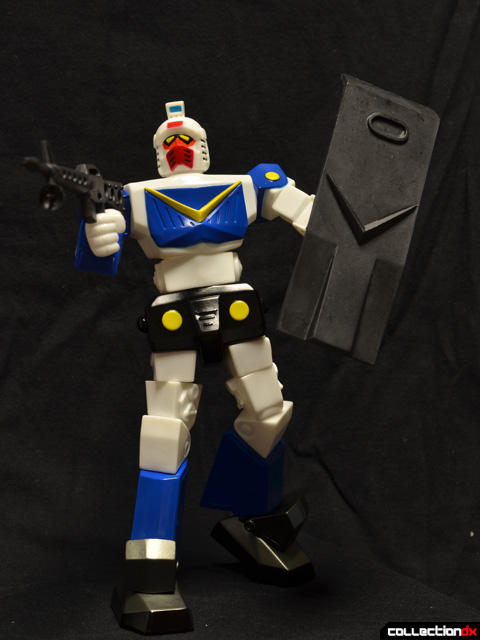 Bisson also looks great blasting some unseen baddies.  The durability of sofubi and the chunkiness of this not-bootleg sculpt combine to make a great looking and feeling toy of an obscure anomaly in mecha model kit history. 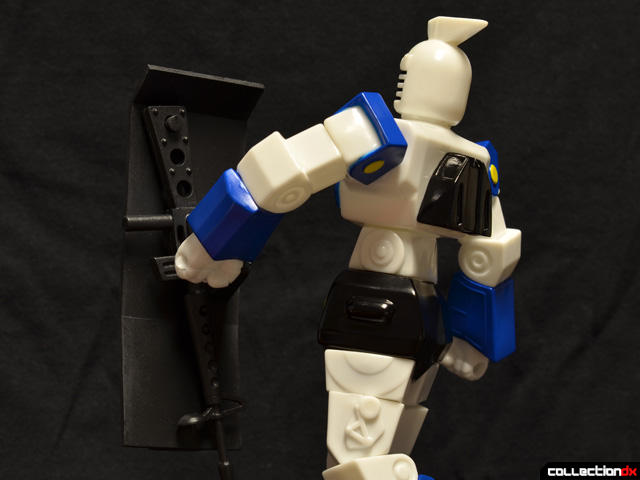 The gun can even store on the shield!  I do not know if the original model kit could do that, but it is a fantastic little feature. 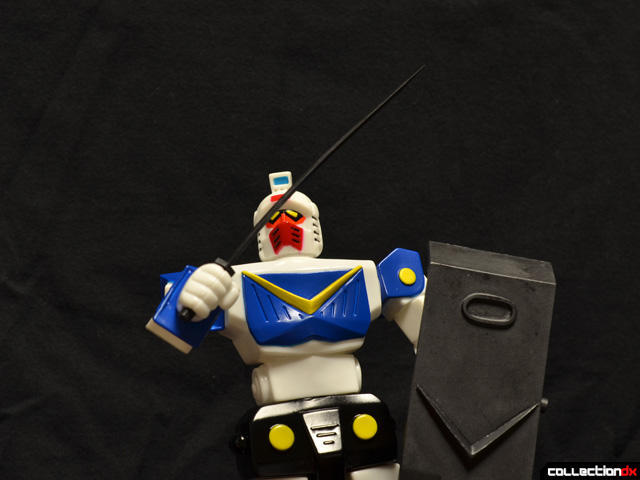 The sword is thin and sharp.  The resin is a little bit springy, but it would still snap if caught on something or bent too far.  After shooting the review I noticed that there is actually a slit cut into the backpack to slide the sword into for storage, but the slit is not quite wide enough, and I broke a small sliver off of the tip of the sword trying to get it to fit. Armored Suit Bisson looks great punching, stabbing, or shooting its enemies.  It even looks natural on a flying base.  I put on the alternate head for this shot, which has sharper and more refined detail.  I think it is too sharp for the rest of the sculpt, so I am sticking with the lumpy sad robot head from the rest of the pics. 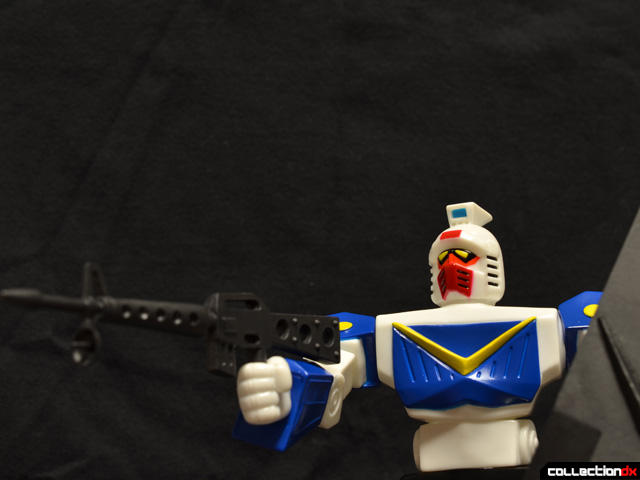 One thing we have to discuss is price.  Bisson was a limited production run item offered as a preorder that I had to place through a middleman service.  By the time I was done and had the toy in my hand, it had cost about $150.  It's a lot for just another dumb vinyl robot figure, but for a highly articulated and lovingly made figure of a totally oddball and obscure design, I think it's fair.  Gigabrain currently teaser images of one of the bug-headed badguy mecha as their next Animage release, which is great.

Obscure is right. The lengths that some of these sofubi makers are going through to make some of these pieces is astounding. Also glad they are getting away from formless cutesy psuedo-kaiju.

I am totally with you on this. I have been much more impressed lately by the highly polished and finished looking sofubi items than the more and more formless and 'crap for the sake of crap' that the Designer stuff has been trending towards.

This thing is absolutely hideous.

And I freaking love it.

Maybe you guys can include it in the next video of this:

This is wonderful. The whole design makes me think of Kore Janai Robo, but I guess it has more in common with Atoranger.
In case anyone else was confused, The Animage is completely unrelated to magazine-of-the-same-era Animage.