Like the previously reviewed Dalek Drone Army Builder Pack, the Weeping Angel Army Building pack is part of the Character Builder line put out by Character Options in the UK, distributed in the US by Underground Toys.

The weeping angels are probably the most iconic enemies to come out of the "new" Doctor Who series. They can be absolutely terrifying if written correctly. 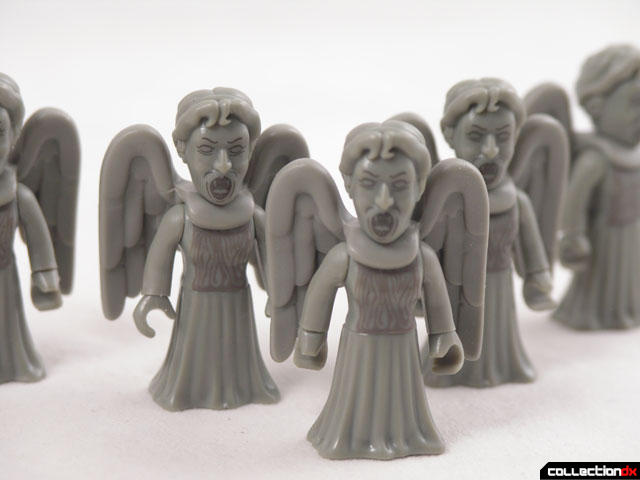 The general premise of the Weeping Angels is that they are an ancient race that feed off of the energy generated when they send a "victim" back in time. The victims don't die (as a rule) and instead live out their life before they are born. Only rarely will they kill a victim, in in those rare cases the Weeping Angels can speak through the re-animated dead.

The angels cannot move if they are being observed by a sentiment being. However they can move in a millisecond when they are not observed. This gives the appearance that they are moving in static positions each time the victim blinks its eyes. The Weeping Angels can affect each other, so they place their hands on their faces so to not exchange glances, thus looking like they are weeping.

Trust me, they are scarier on TV. But one has to wonder, if they send people back in time, can't the Doctor simply pop back in time and retrieve them? Best not to try to apply logic to the Doctor Who universe...

That being said, their terror does not translate well to toy form. They just look... odd.

The set of 5 comes in a window box, and each angel is exactly the same. 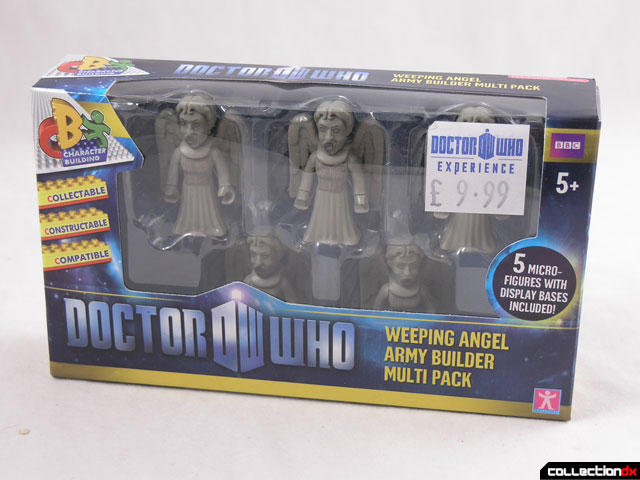 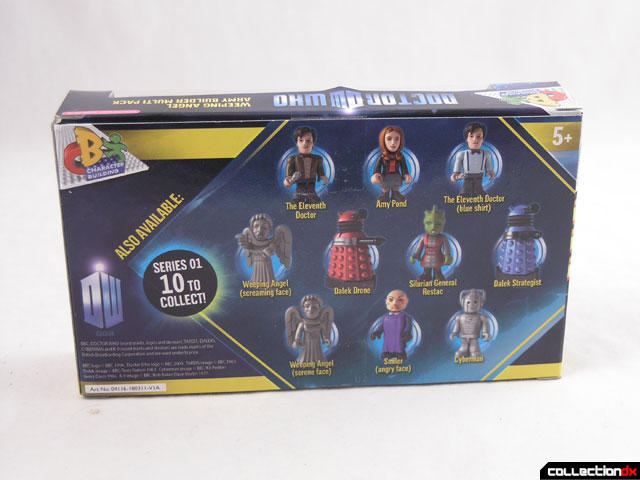 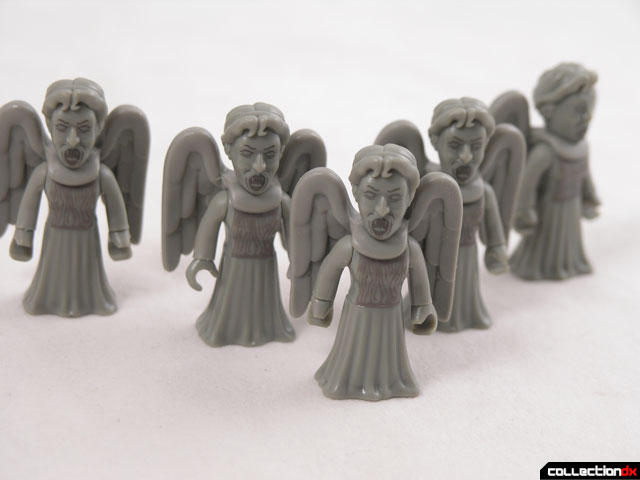 Each figure consists of four pieces and a stand. They are molded in Grey and have darker grey detailing. 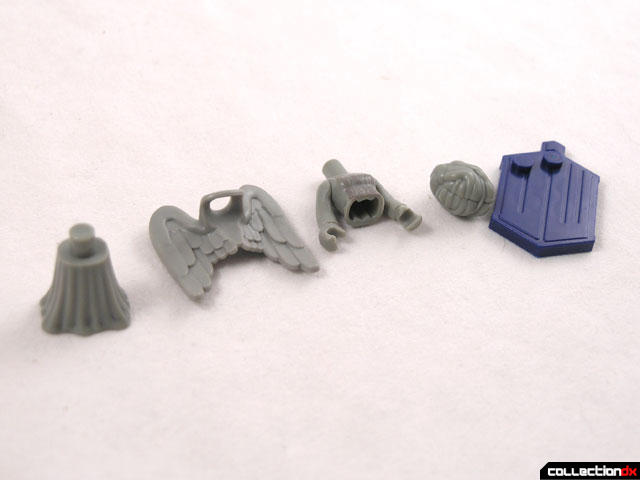 What makes these figures look odd is the fact that the mouths are painted on rather than molded. Something is just wrong about them. 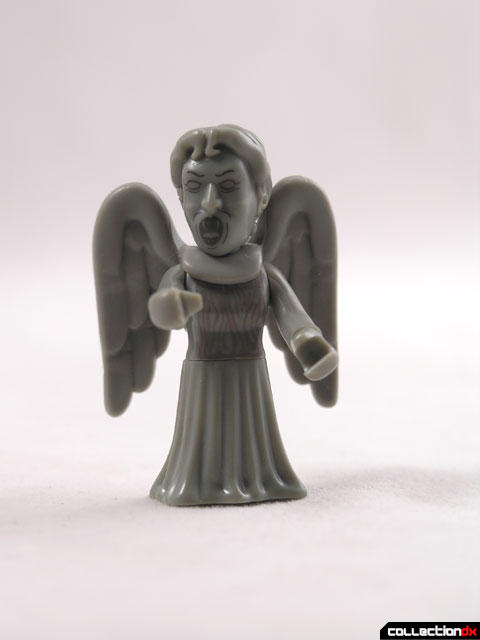 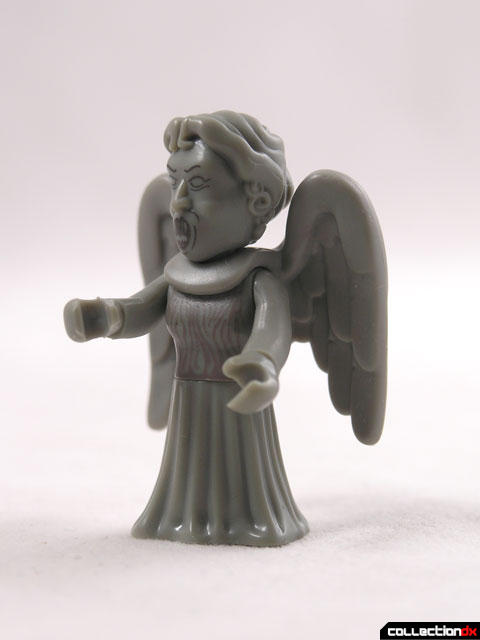 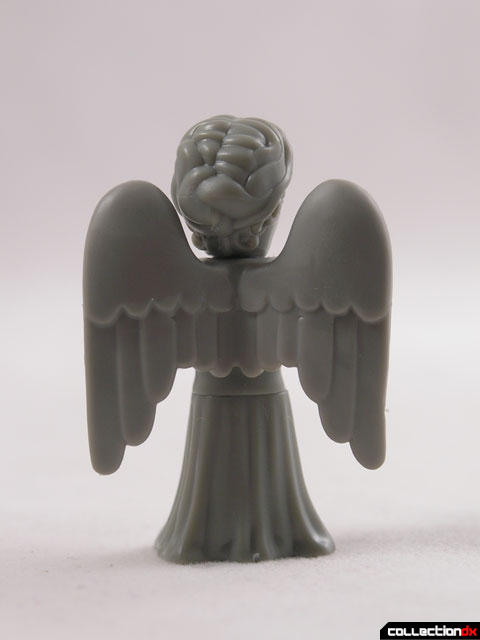 The stand is shaped in the form of the Doctor Who logo, but the odd peg placement in the corner makes them unsteady, Fortunately they stand fine without them. 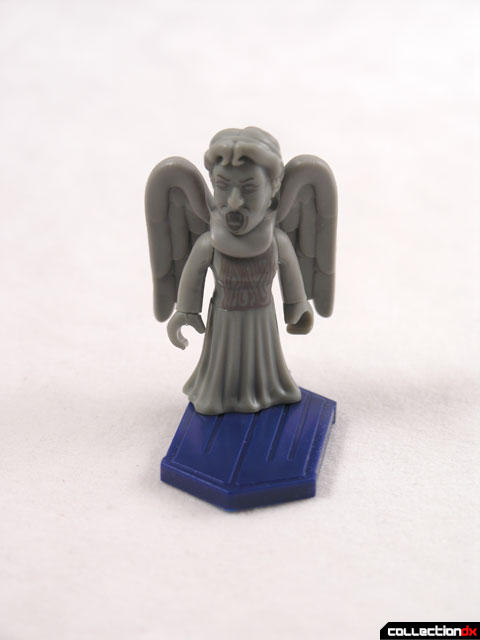 So who would win an a battle between Dalek and Weeping Angel? Are the Dalek's considered sentient? Since they don't have eyes, can they be infested? 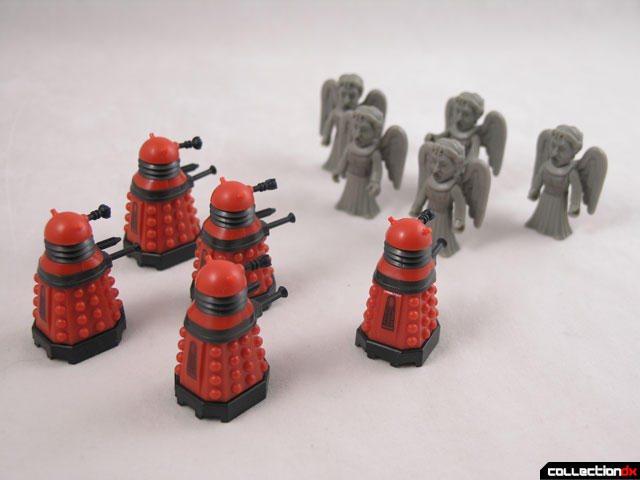 Hey THANKS for reviewing the Character Building line of Doctor Who toys. I've been amassing a small army of these suckers (16 total Dr Who figures, and 10 of the "Target" Packed Tescoes) and I simply adore the entire line.

Fortunately (or Unfortunately I guess, it's all perspective) I don't need to buy the 5 pack of Angels, since I ordered 6 blind packs from WhoNA.Com and 4 of them were the Angels. I have them surrounding my in-scale Tardis ala the end of "Blink".

Keep up the CB Reviews...

They're even creepier in Lego-form...