The Waste Allocation Load Lifter - Earth Class (aka WALL•E) was a mass-production robot built by the international monopolistic conglomerate Buy n Large in the 22nd Century to begin the long clean-up of human garbage and waste on Earth. Though only designed for a trial run of five years, the reality of the situation on the planet meant that it would instead take hundreds of years to affect clean-up safe enough for humans to return. And so, Earth was completely abandoned so that the WALL•E units could work more efficiently. Over the centuries, with a complete lack of outside support, the thousands of WALL•E units across the world worked themselves into ruin. By the 29th Century, only one remained fully functional- surviving by salvaging spare parts from its rundown comrades as a most-unexpected & unprecedented form of self-preservation; its unusual motivation to continue on functioning would eventually prove to be turning points for both humanity and itself.

Each WALL•E unit is a small trash compactor programmed to search out solid garbage, collect it within itself, and compress it into more-manageable trash cubes for later pick-up by other dedicated robots. In addition to the two small three-fingered hydraulic manipulators on either side of its chassis, each has a small laser cutting torch built in between their optical sensors on the sensor pod above which can cut larger garbage into smaller and easier-to-handle chunks for them to process. They roll on two tractor-tread assemblies and are able to climb difficult natural and artificial terrain such as stairs and junk heaps with the sophisticated traction and suspension within them. To make certain that they too do not contribute to the mess they are trying to clear, all WALL•E units use solar energy as their primary power source. When recharging, during difficult weather patterns, or in storage, each unit can retract the sensor pod, manipulators, and tractor-tread assemblies into the hollow interior to make a compact cube shape.

So this is the second entry in the Pixar Figure Collection line produced by Kaiyodo, based on the lead character from the Academy Award-winning computer-animated 2008 feature film, “WALL•E”.

Anywhere that WALL•E is articulated, there’s a Revolver Joint. Matter of fact, the only places that don’t feature a Joint is between his eyes, at his non-telescoping elbows, and at his knuckles. They do a pretty good job of hiding these tiny Joints too, even going so far as to cover them with a flexible piece underneath to resemble the suspension system for his tractor treads. 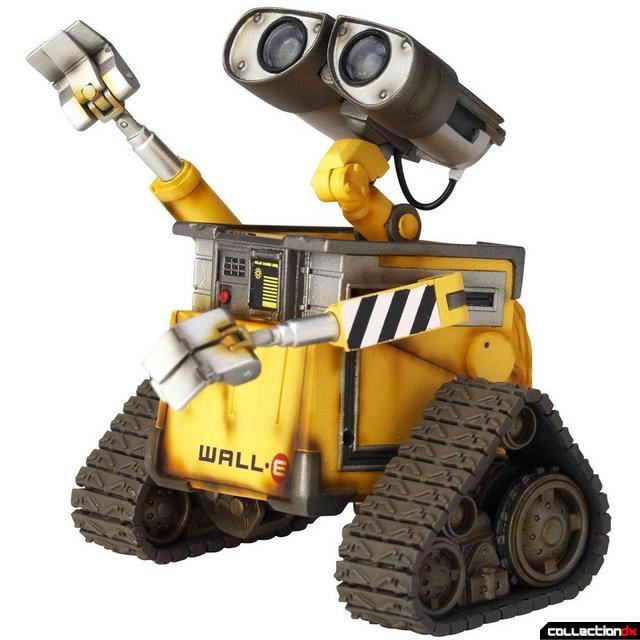 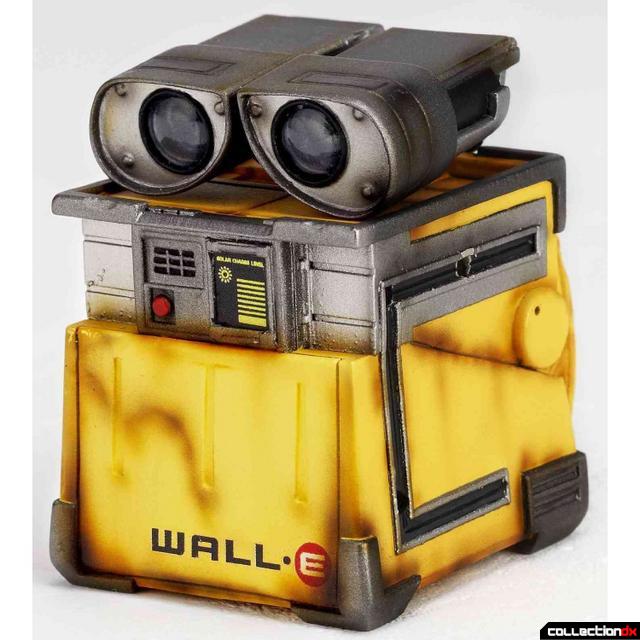 One notable piece of articulation I’m glad for is present here that was not available in the vast swarm of toys that came out with the film’s original release years earlier. In the film, WALL•E’s shoulders are attached to an “L”-shaped rubber-sealed track along either side of his box-like torso. This allows his arms to extend forward and downwards to pick up objects, or slide backwards for storage when not in use.
In the case of this figure, on each side of the torso there are three holes along different parts of the track so that his arms can have a far wider level of emoting. So all you have to do is un-peg the shoulder Revolver Joints and swap their positions. (Perfect!) 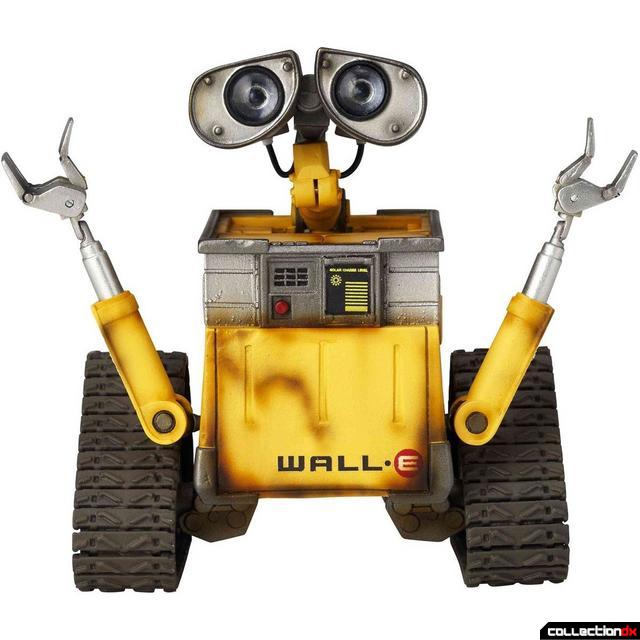 This set comes with four accessories, including a low-detail non-articulating 1” representation of WALL•E’s cockroach pet/friend. 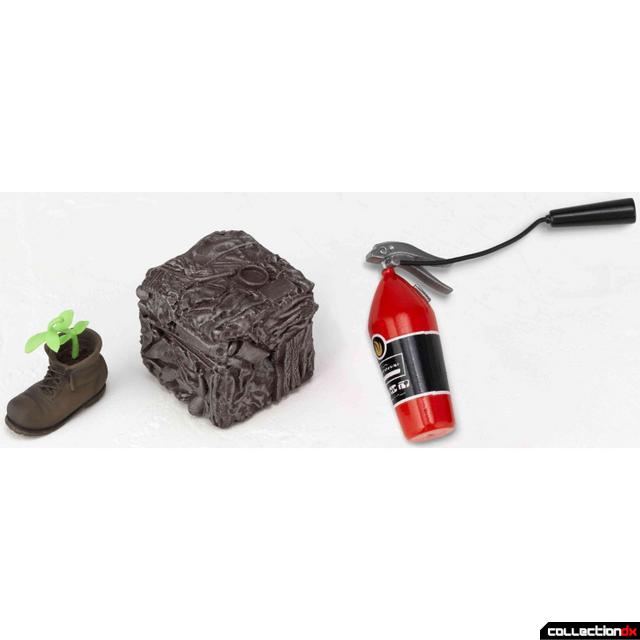 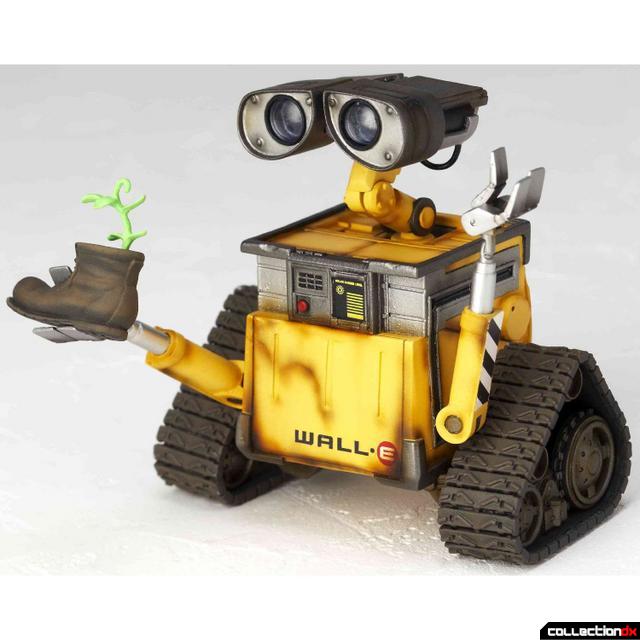 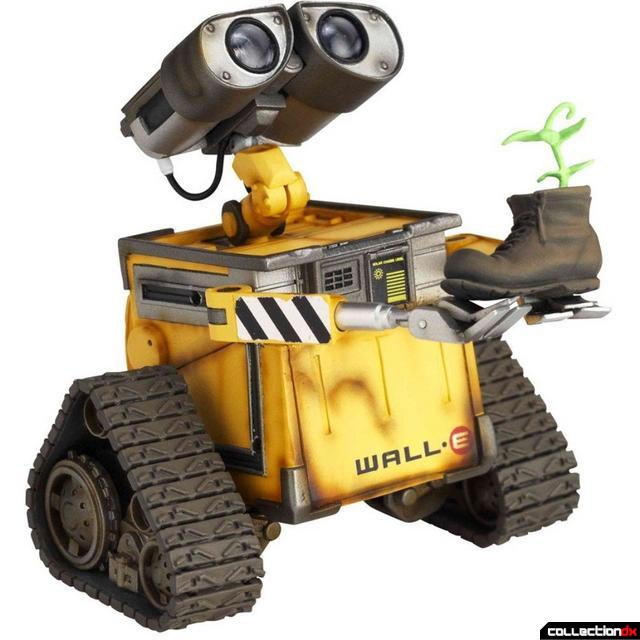 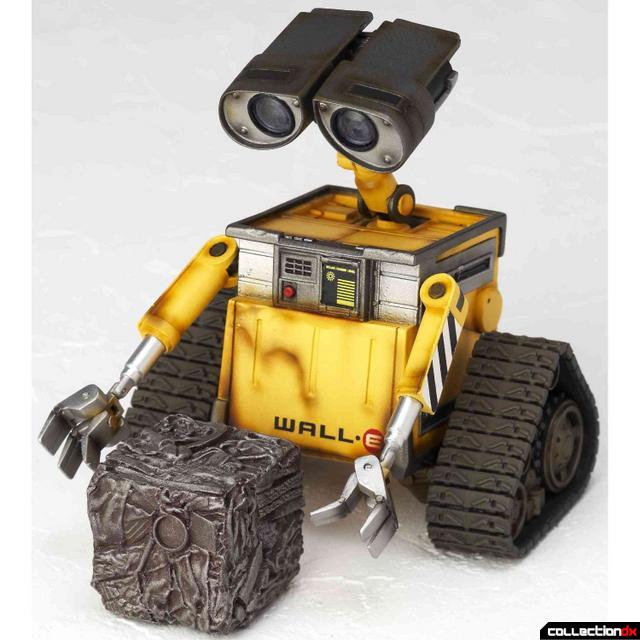 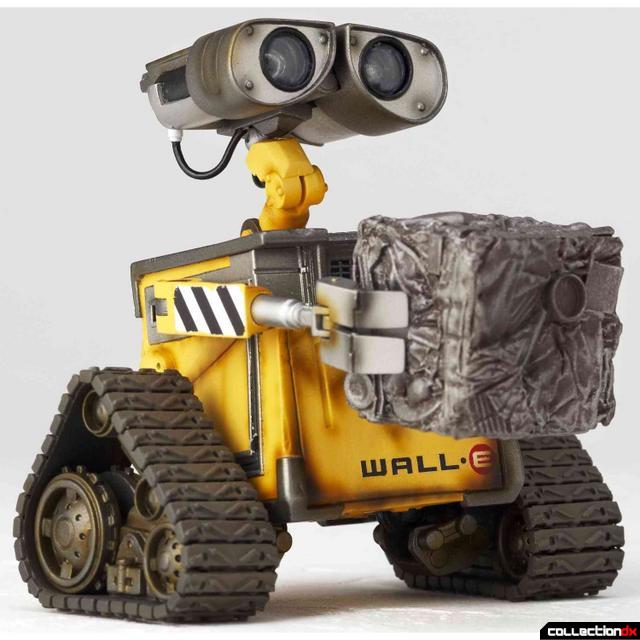 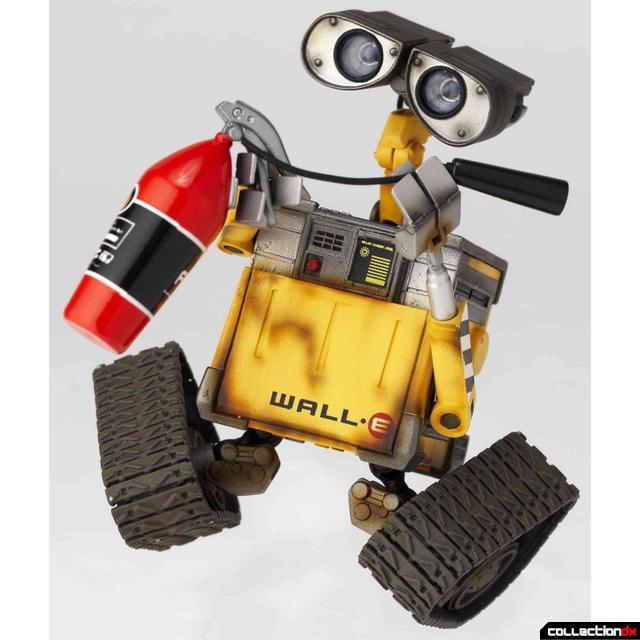 While a compacted trash cube is provided, the only missing piece of articulation is WALL•E’s entire torso, which cannot open here. So you can’t put anything inside of him.

Yes-! Though I didn’t know where it would come from or which company would produce it, I’ve always wanted an articulating figure of WALL•E. The closest I was able to get in 2008 was the 4” U Repair WALL•E toy, which did pretty much everything I wanted it to. Matter of fact, the only thing it couldn’t do that I missed was have telescoping forearms (it could have been done), or add two more holes along his torso on either side so that the shoulders could be placed in different positions (there was no excuse on that one!).

This Revoltech set doesn’t really do much differently from the U Repair version, except that it’s about an inch shorter, it doesn’t open up (disappointing, but not surprising considering how difficult it might have been to engineer that and keep the price down), and the treads don’t roll (chhh, I can live with that).

Now, your typical Revoltech release is famous for its outstanding range of motion for action poses. But they’re also well known for their level of molded-in detail. As usual, Kaiyodo brings its best game forward here, with an excellent quality of surface detailing, including intentional bangs and dings in his metal plating! (Actually it’s ABS, but whatever.)
Perhaps the most common complaint about these mass-produced figures is once in a while the paint can be a little sloppy (usuallypetty complaints, in my opinion), but in this case that’s anything other than bad because the 700-year old trash bot is looking particularly smashing in his carefully-applied rust stains and dirt patches. Even the hard-to-reach areas like the pneumatic pistons on his back and the tractor mechanisms receive TLC in their weathering applications.

This really is a beautiful figure, both in appearance and articulation- two of the most important words in my vocabulary when it comes to buying any toy or model

Now, I suppose you’re wondering why it is I’ve been using nothing but stock photos all this time? Well… it’s because of this: 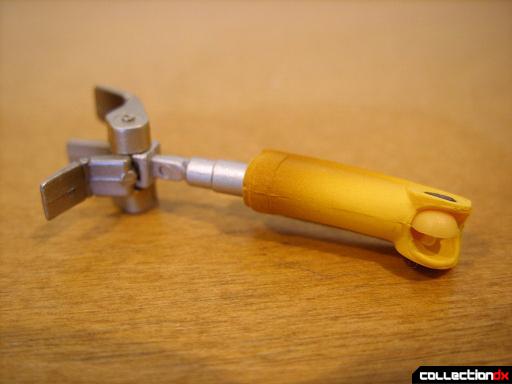 Y’ see, one of the reasons I both love and hate Revoltech figures- and have intentionally avoided the majority of their releases- is because despite their impressive track record, they are still very small and frail, hence prone to breaking easily.

I kid you not, ladies and gentlemen, not two minutes after I opened this MiSB figure (that’s “Mint in Sealed Box”, for you non-collectors out there), it broke...

As I attempted to remove the shoulder Revolver Joint to test and see it in a new position on the torso (y’ know, that thing I’ve wanted in a WALL•E figure for years that has now been generously provided to me?), the Joint itself popped apart. It didn’t break per se, but it’s one of those really-tiny 2mm Joints that doesn’t ratchet when it turns. No big deal- better for it to be designed to pop apart under stress than have it break, right? Well, the problem with this is A- the friction in both the arm and torso is so great that I can’t remove either half of the Joint; and B- every time I try to reinsert the Joint into its other half, the plastic on the arm becomes distorted. If I continue to force it, I suspect the plastic will eventually crack and break off.
(The guy’s been cannibalistically replacing parts of himself for 700 years, and he finally decides to conk out on my doorstep!? Booooooo!)

So, the clock on this newborn figure is barely two minutes, thirty seconds. As I’m in the process of reassembling the shoulder, my sweat-coated fingers (hey, I have Asperger’s Syndrome, meaning I’m naturally prone to easily getting anxious) slipped, and I heard more than felt a snick, followed closely by a clatter to the floor. And lo! my brand new WALL•E was decapitated. Featuring another of those tiny-ass Revolver Joints at its base, this one clean-off broke and left the connecting peg inside the torso. No hope of recovery on this one, EVE. 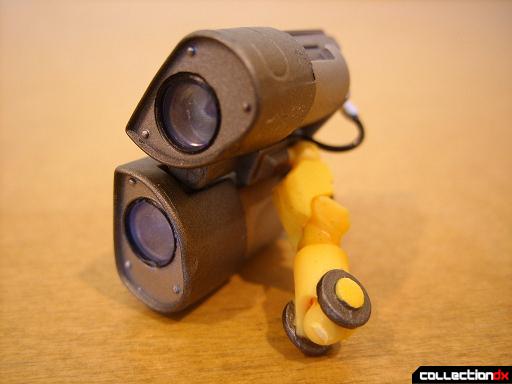 What’s the number for the Buy N Large quality control office(s)? I want to file a complaint about my freely-obtained sampler. 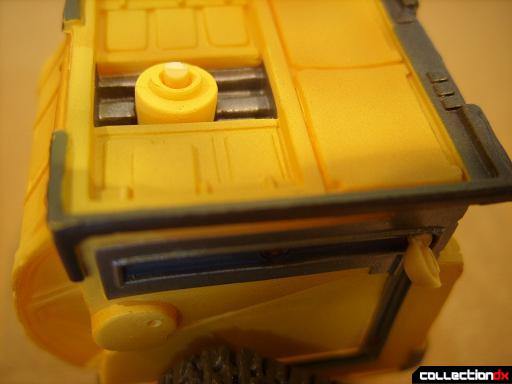 Much as I appreciate an adult collector-oriented posable figure that can actually hold a dramatic pose for decades on the dust-covered shelf, it is a constant struggle for any toy maker to get that friction-to-motion ratio just right so that their consumers won’t be bitching in their blogs thirty minutes after their first official release. Fair enough.
But in this case, I think that form should definitely have followed function. These sections are way too big and prominent to feature Revolver Joints that small. Put them on a smaller head and wrists… okay. But here, a larger Joint could have been used and I wouldn’t have complained because, well… they wouldn’t have broken. And, you know what? There’s four of these 2mm Joints in this figure, with only the suspension having those double-ratcheting 4mm Joints. And I broke two of them right out of the box. 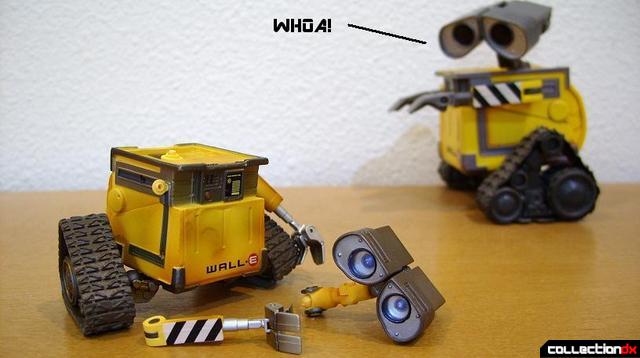 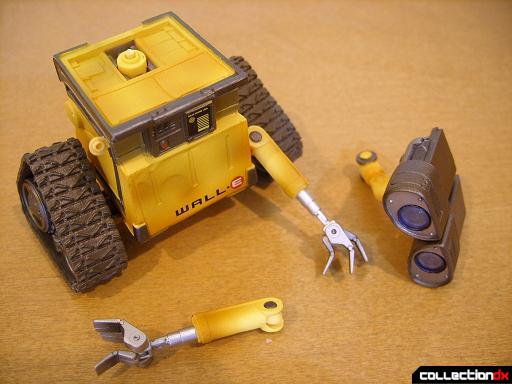 I have four Revoltech figures that I bought years ago, and they are all completely intact, including their display stands.

Apparently this is not limited to just the one that I got, either, as many other reviewers across the net have had similar breakages. So this is a design flaw, not a quality control problem. 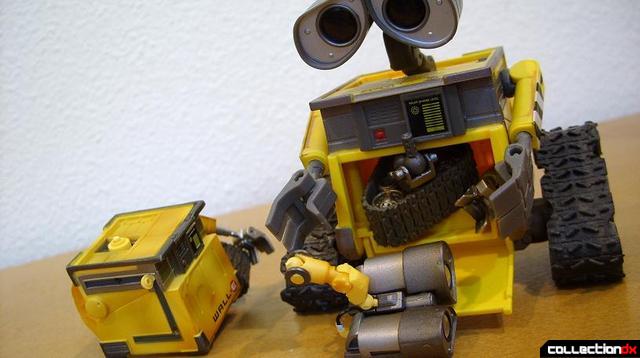 The problem with these Disney figures (and the newer Revoltechs in general) is that they seem to want to hide the joints, as opposed to the older Revoltech figures that are pretty much "robot parts with big spheres in between them". This makes a better looking figure, but it also means that you have issues like the one you note here, where there's too much stress put on the joint and it breaks.

Revoltechs in general aren't really good toy toys, as in "give it to your five-year-old to fly around the room". These guys are definitely set-and-forget. (I do feel kind of bad for everyone who was all "oh, finally a good Buzz Lightyear/Woody/WALL-E!" and bought it for their kid who immediately broke it.)

Ohh, I've never thought of any Revoltech as a toy, and I don't treat the ones I have as such.

I understand hiding the Joints, and that's fine, but don't sacrifice structural integrity for it! I'd rather have a bunch of obvious ball joints for superior articulation than the aesthetic of having them hidden and then have them so small that they break.

As an update of sorts, I just opened up my EVA EVO Unit-05 last night, and freaked out when I saw seven of those 2mm Joints in there. the difference is, none of them broke right out of the box because- as I pointed out above- they weren't attached between major sections other than the head, wrists, and pantograph cables, which is completely appropriate because those are all small pieces of the figure.

You're supposed to carefully move each joint before playing with the figure to loosen any excess paint or PVC.

Says so on the box of pretty much all of them.

The problem is they covered the Joint in the shoulder, so I had no choice but to grab the arm, not the Joint itself.

Anything on the box that isn't a picture is Greek to me.

Yeah, I gotta second that one.

That's good because those instructions are done with pictures of a generic Eva unit showing where to grip a joint with a pair of pliers ;3

Very disheartened to read about the easy breakage. I would've sprung for this if I hadn't read this review. Too bad!

Ha! Best part is the big Wall-E putting all the part in' em.

Anyway, good to know about these things. I haven't had any problems with Revoltech product before, but I also have been kinda bored with 'em over time. Plenty of other toys have done the same with better results. Sad to see something break so easily after minimal use. I know how you feel, too: where you're totally careful with something but it breaks anyway.