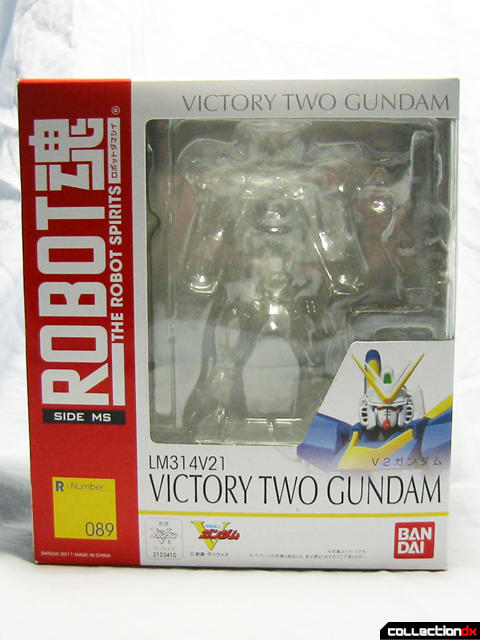 Thanks goes to HobbyLink Japan who sent this figure over for review. 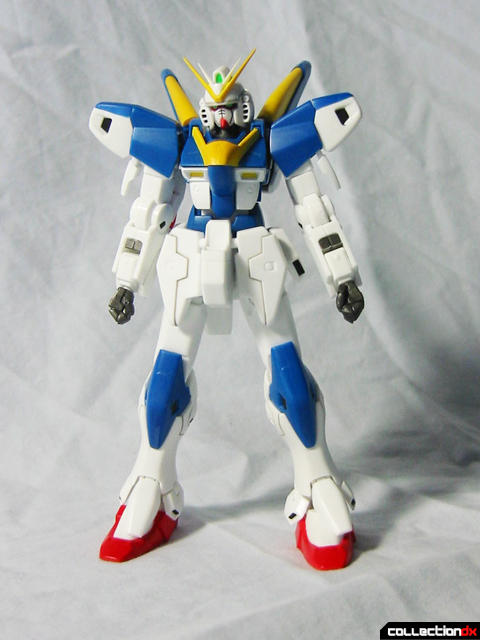 While I haven’t seen the Mobile Suit Gundam Victory anime (I plan to watch it SOME day), I do have a nostalgic soft spot for many of the designs, since I recall seeing the model kits and the action figure line “Mobile Suit In Pocket”. 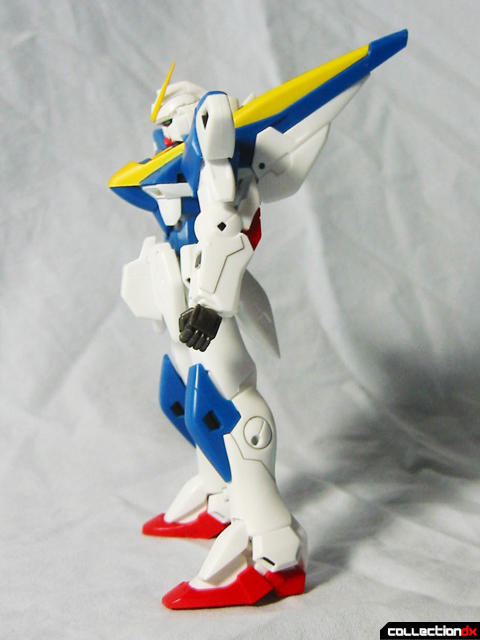 Ever since Zeta, every Gundam series has always introduced a mid season upgrade, which is what the Victory Two Gundam is. 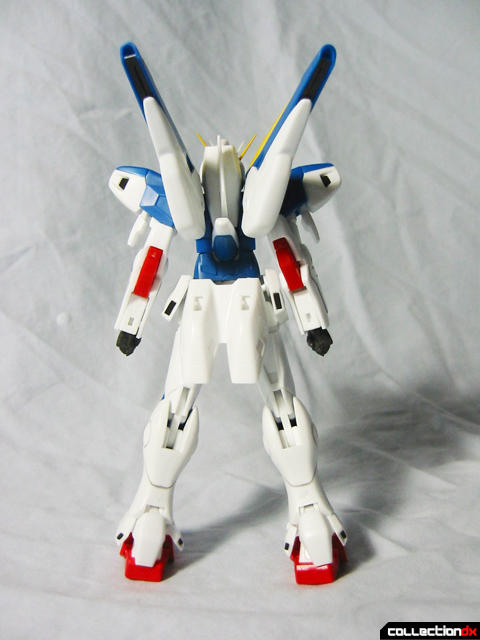 This Robot Damashii is one of the earlier entries in the line (was originally released in 2011, reissued in 2015). Standing around 5 inches, this figure is quite sharp looking despite it being made from PVC, rather than the ABS plastic used on modern Robot Damashiis. Interestingly enough, despite the RD line not being a scale-based series, this toy IS in scale to 1/144 since the by the time of Victory Gundam, Mobile Suits became much smaller than they were in the earlier in the Universal Century (UC). 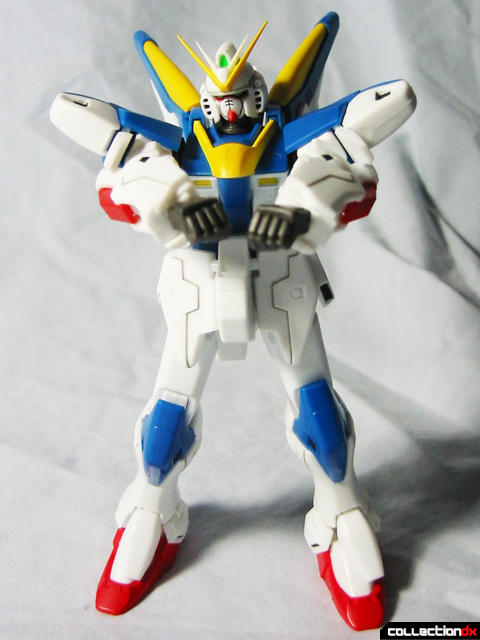 So again, even though this is an older RD, it still has much of the expected articulation one would expect. The shoulders can pivot forward (handy when holding the beam rifle with both hands).

A pleasant ab crunch here, but the waist can turn only a bit. It should be noted that the Core Fighter is not removable on this toy. 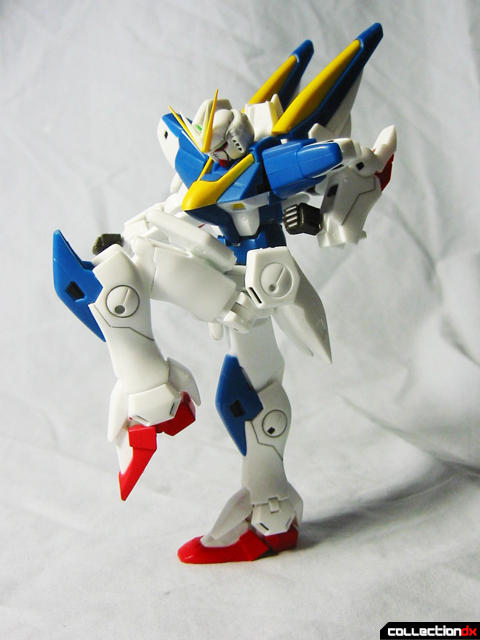 Here is the full range both the arms and legs can achieve. 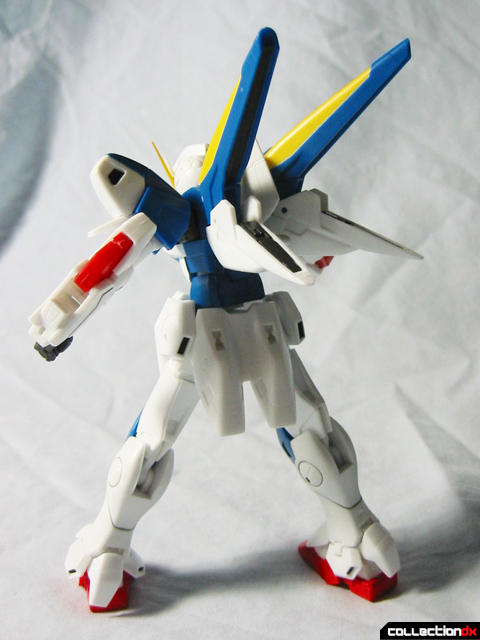 The rocket thrusters can open up (more on that later). In the box, they are separated from the body. They’re connected using small pegs so they tend to pop off a bit easily. 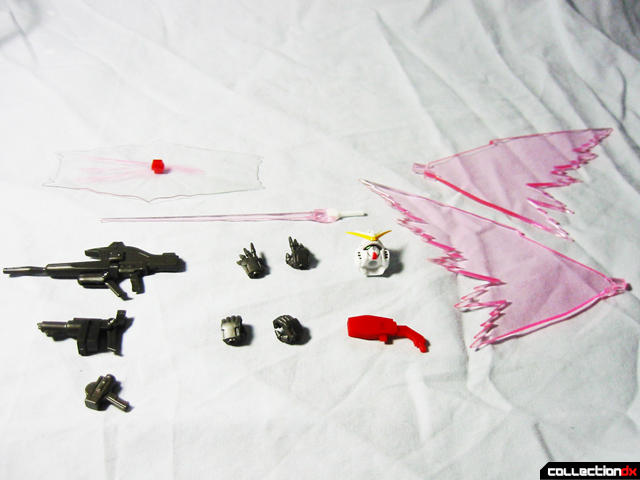 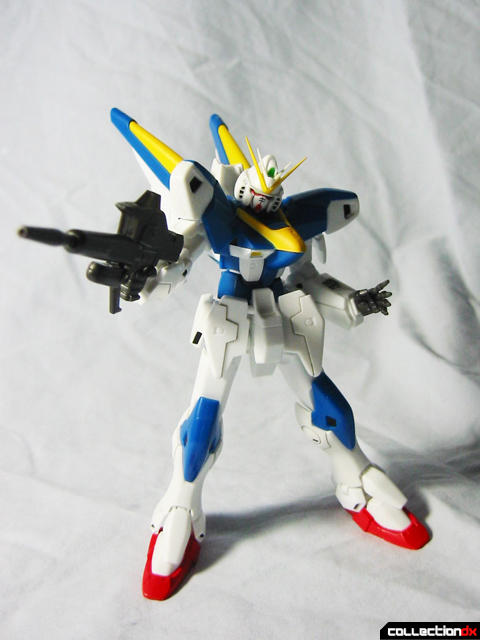 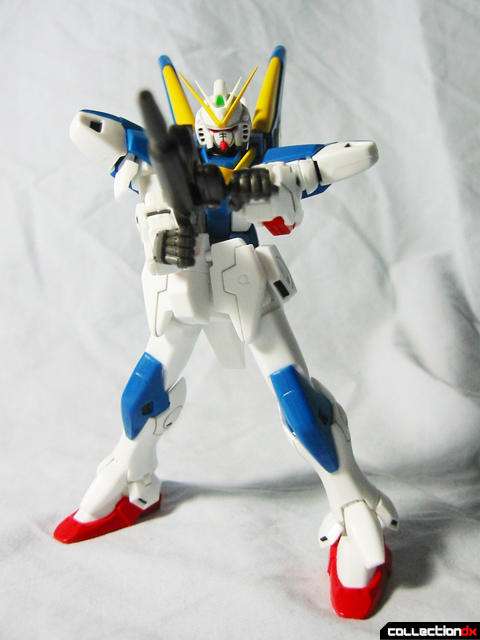 Beam rife in hand (note that you’re given only one pair of hands for both the beam rifle and beam saber). 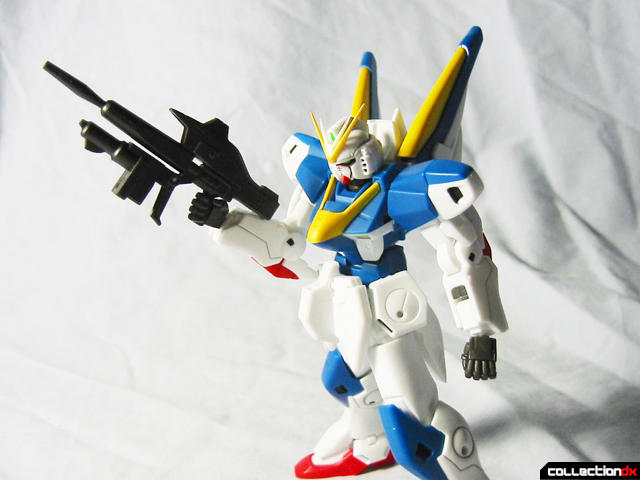 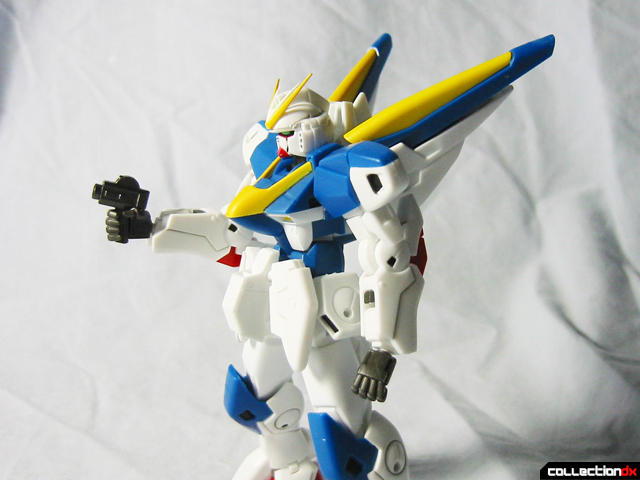 There's also a part to make the lower half bigger along with just the handle part that as far as I can tell can't attach to the actual beam rifle (I swear I thought it was a MS-sized camera at first). 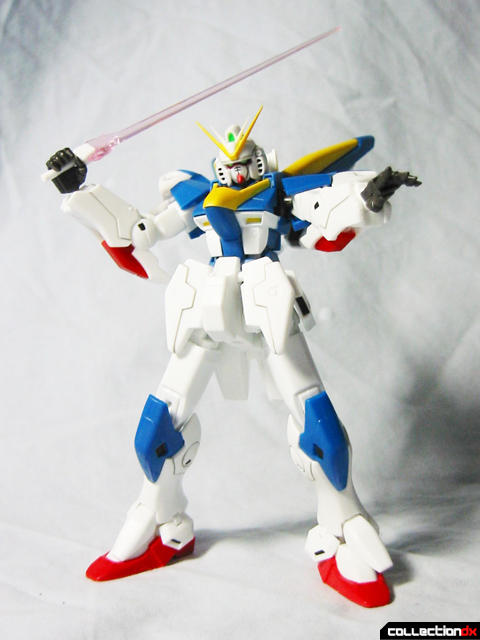 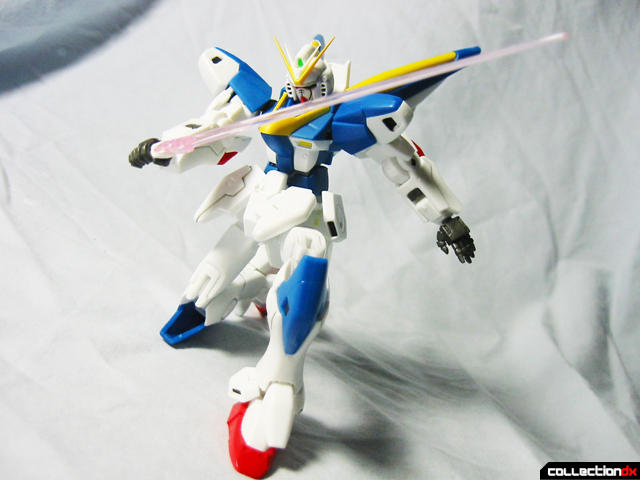 The beam saber isn’t as snug as I’d like but Victory Two still holds it well enough. 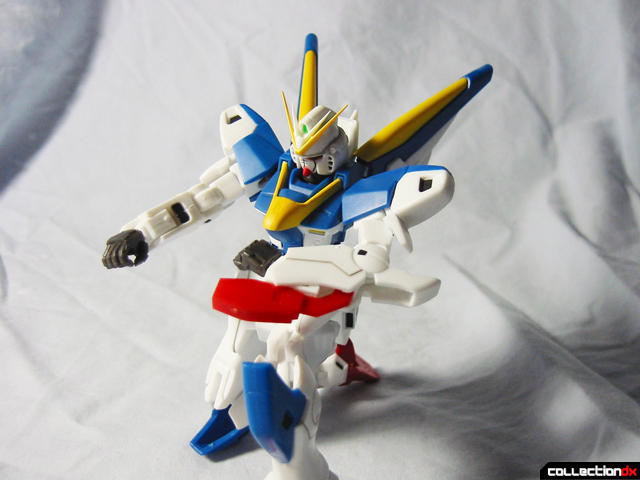 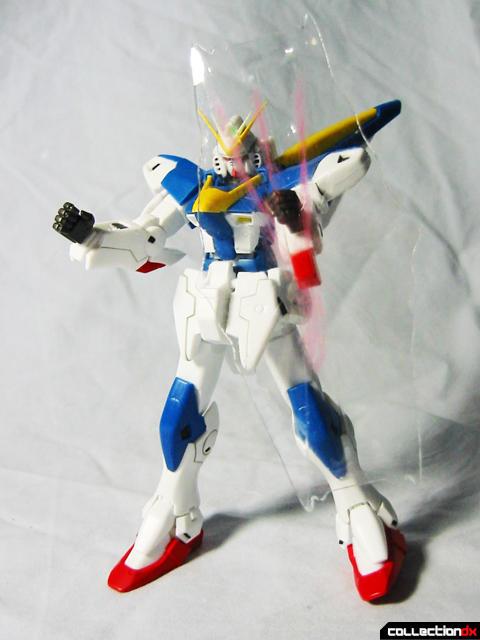 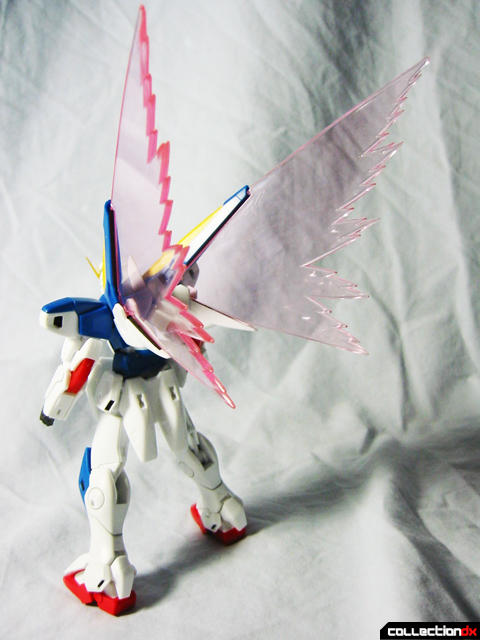 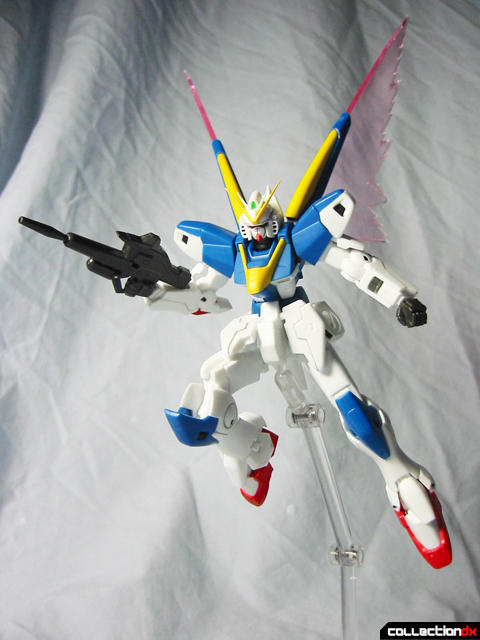 The wings of light make the figure top heavy, but look stunning. 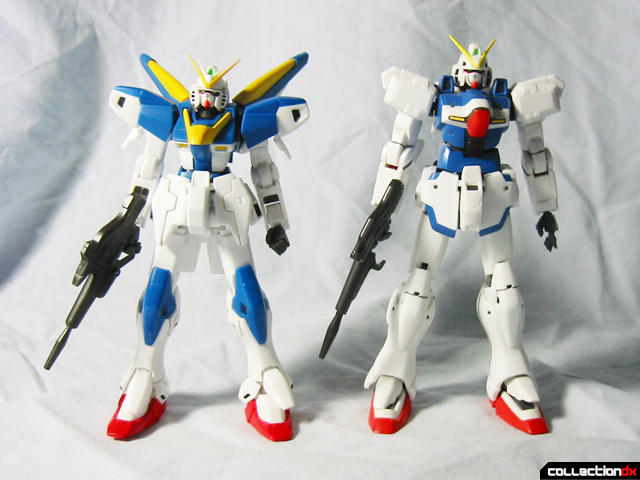 A comparison with the RD Victory Gundam. 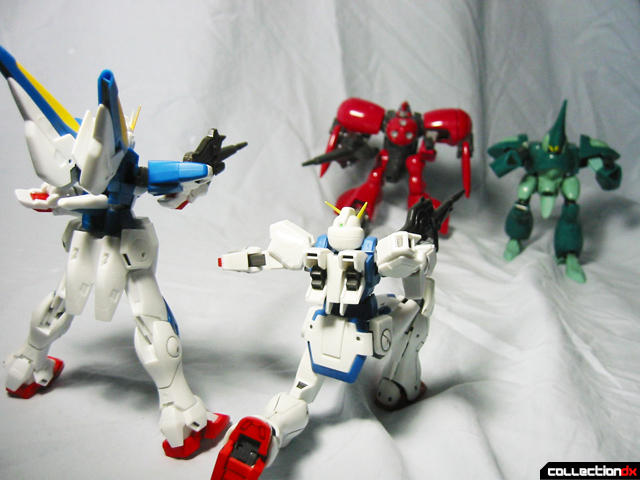 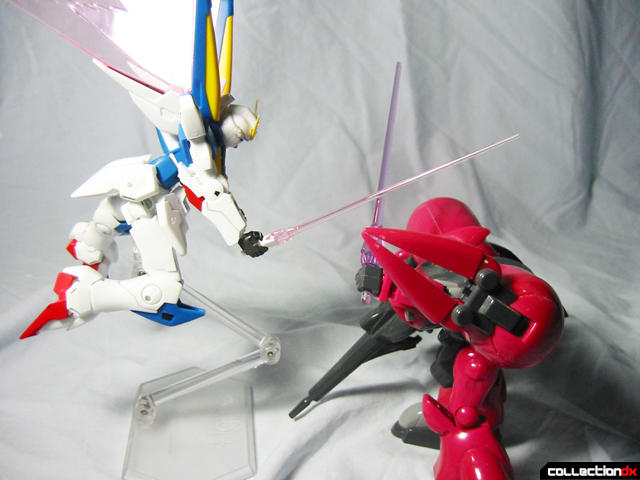 Looks like some old Mobile Suit in Pocket figures are itching for a fight. 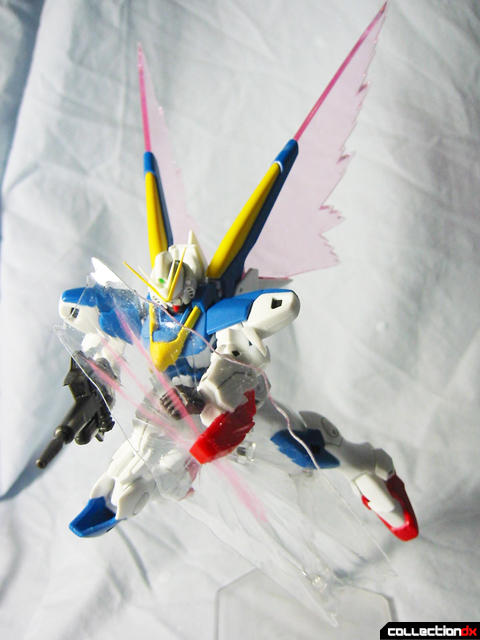 Overall this is pretty good if a somewhat dated Robot Damashii that I do recommend getting. The articulation is a bit hindered but can still achieve some great posing and the accessories make for some good options. It’s understandable that the few shortcomings are forgivable given that this is a 2011 RD and the line has improved somewhat.