I originally had the intentions of doing a review on this figure but it was not meant to be. Someone had already filled that slot. Somehow, some weird planet and/or star lined up correctly somewhere out there in space and the alignment was in my favor. Ultraman was now available for me to review! Oh how happy I was because I am a big fan of this line of Ultraman toys. I don't have a big history with Ultraman, but I am drawn to him. My wife on the other hand absolutely despises Ultraman and when I am watching it, it pretty much annoys her. Especially the opening song which you can see below. Strangely enough, my newborn daughter loves the theme song.

I preordered this figure long ago as soon as I saw how articulated it was going to be. I had not collected any S.H. Figuarts or similar figures before picking this up, so I didn't know what to expect. The figure finally came in and I loved it. Well, enough talk, let's get on with the review and see the figure that started it all.

Ultraman comes in the now familiar Ultra Act box. There is a nice pattern design off to the side in the form of his head. In the window, you can see Ultraman and his contents. 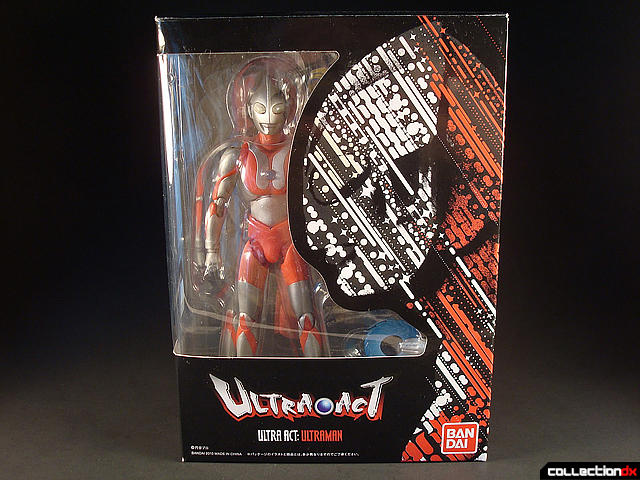 When you pull out the tray you are hit in the face with a strong PVC smell. The inner tray has two levels. The top level has Ultraman and alternate hands. The Bottom tray has his cape and Specium Ray gimmick. 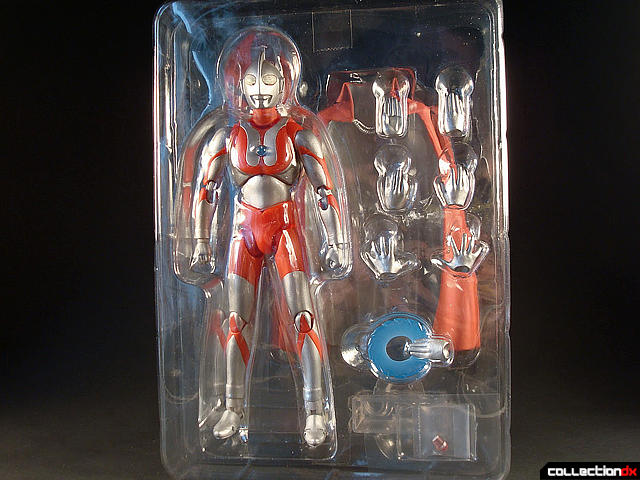 The figure itself is quite nice, save for all the segments in the joints. This seems to be based on the Type C suit due to the wider mouth (used in episodes 30-39). The narrow mouth would be the Type B (used in episodes 14-29). The Type A was the loose suit worn with the wrinkled paper-mache looking mask as seen early in the show (used in episodes 1-13). The segmented body of this figure can be forgiven as they are there to allow generous articulation. 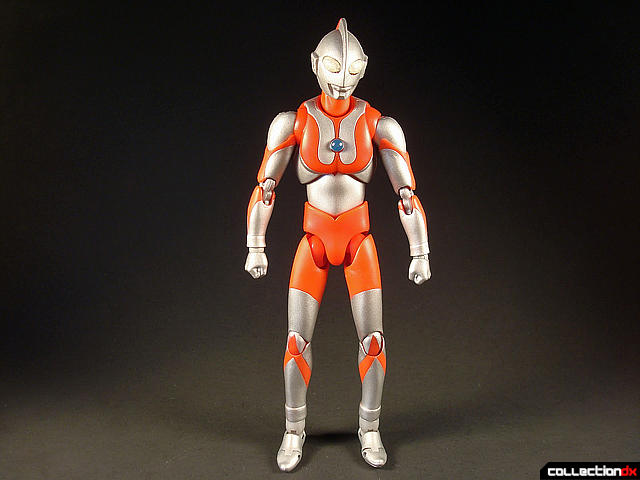 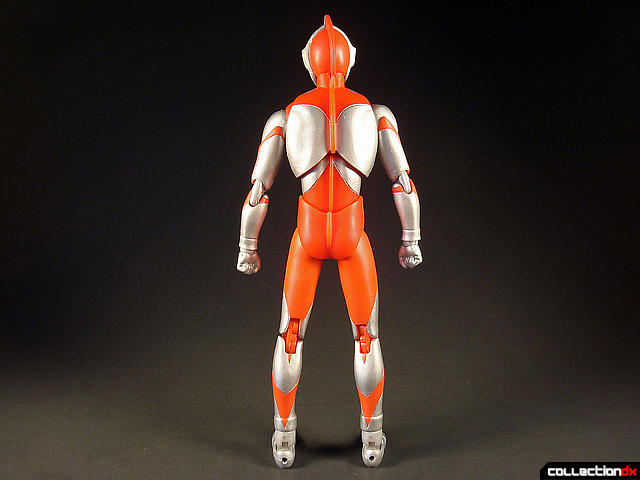 Loved my many and misunderstood by about just as much, mostly those who can't get past the guy-in-a-suit thing. This is a face only a mother can love. Very frog-like and devoid of any emotion. Not very intimidating at all but he is still awesome. You can even make out the small holes required for the actor to look out through on the bottoms of the eyes which are molded from a clear material. Behind the eyes, there is mayonnaise, or at least it looks like it. Very nice effect. 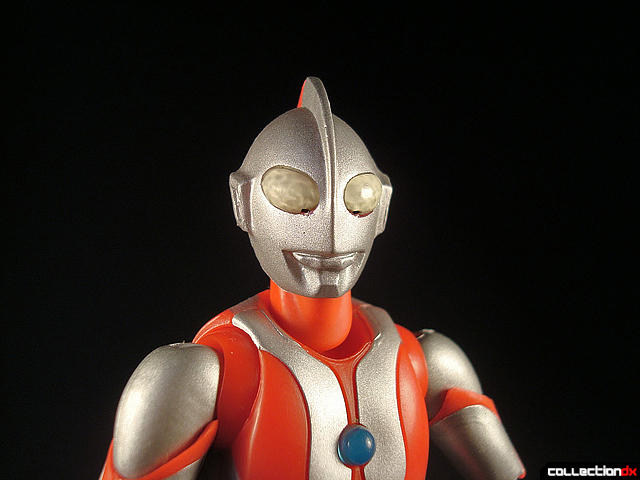 Signature poses are easily done with this figure. He's not even breaking a sweat. 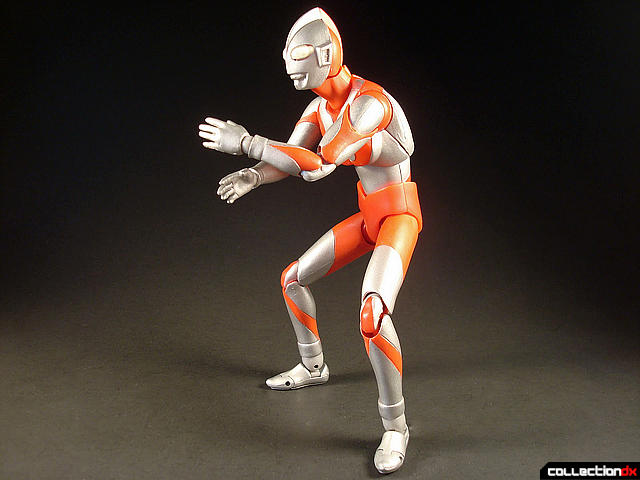 The neck joints allow a satisfying range of movement which allows you to recreate his famous poses. 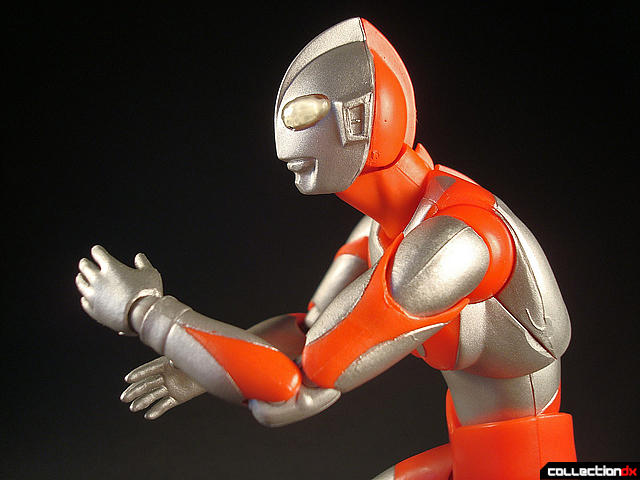 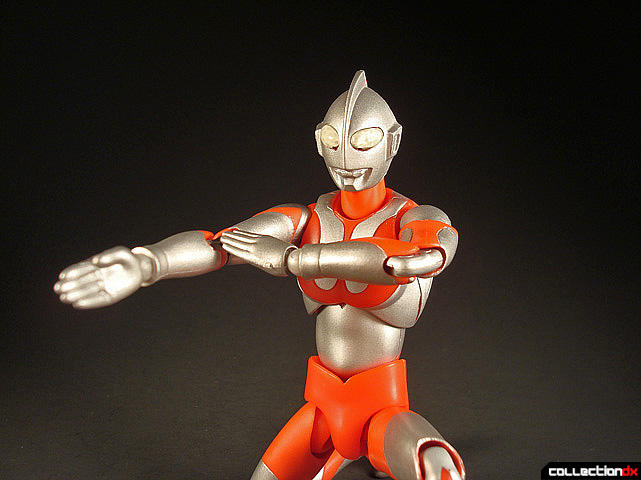 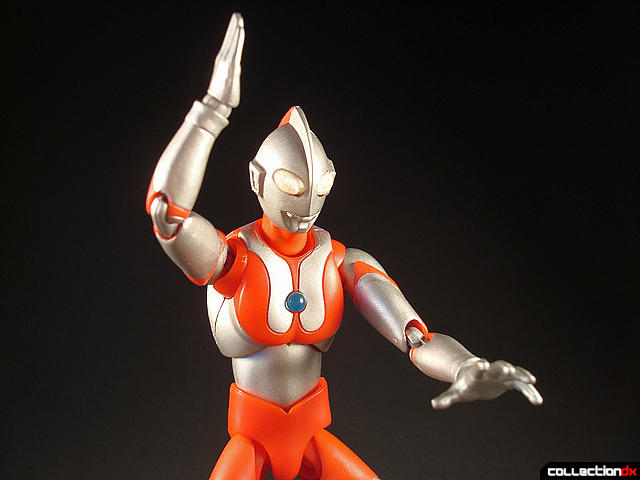 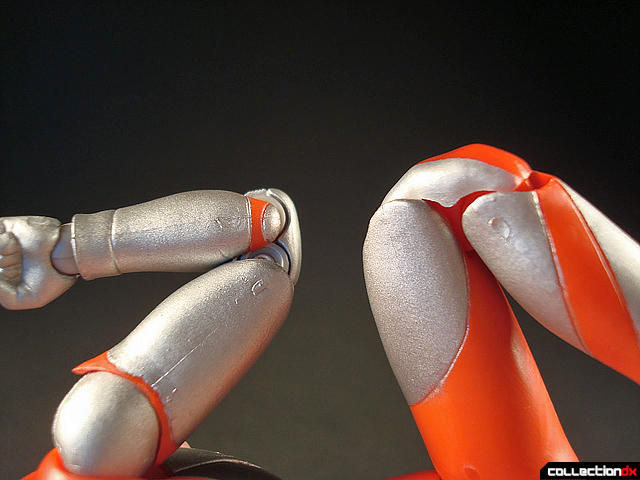 Here are his umm... ball joints for the hips. You'll notice there are cups surrounding the hip ball joints. On top of those are the thighs. Again, this allows a great amount of movement. 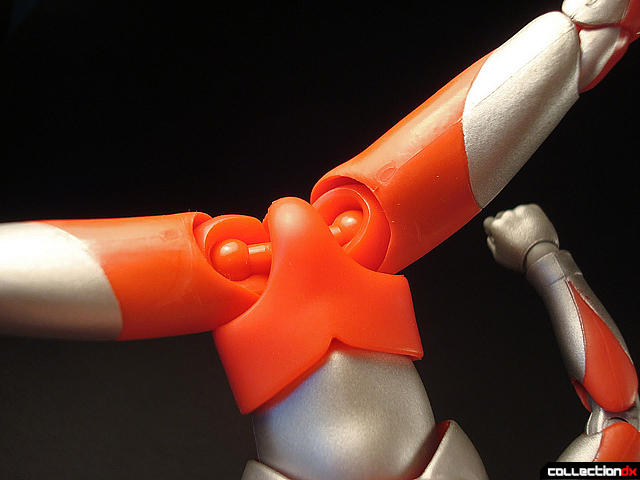 Here he is hunched over to show off the range of his back joints. Unfortunately, wide range of movement equals big gaps. The upper chest and waist pose independently of each other. Note: the waist joint on my figure pops off rather easily. I don't know if this was remedied when the second wave of this figure was released. 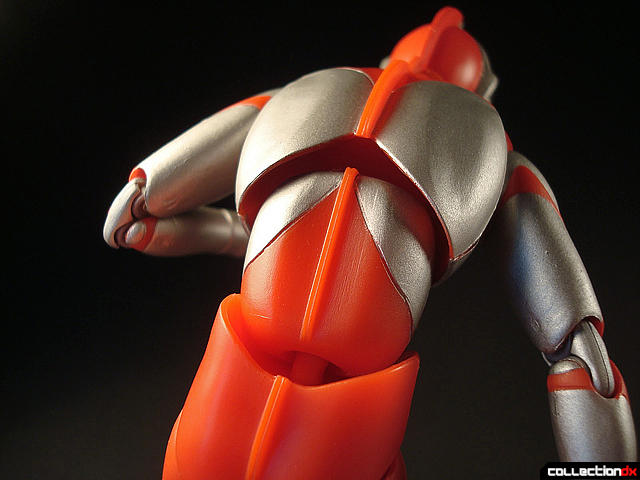 The ankles are also articulated to allow easy posing. You'll see that even the toes have a joint which will come in handy. 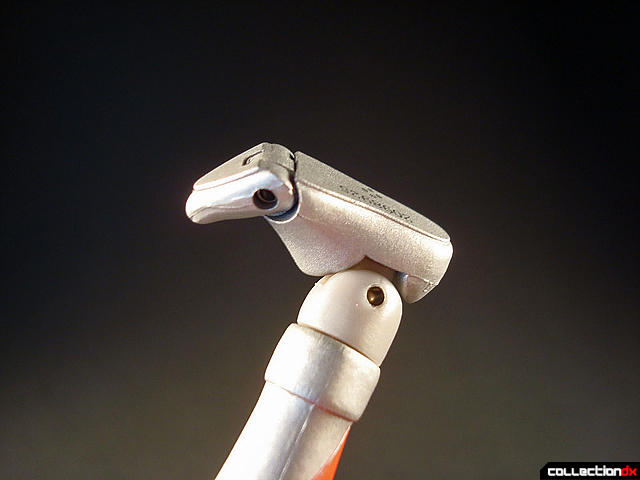 There is no limit to the poses you can achieve with this figure. If pose-ability was the goal of this figure, Bandai did a great job. 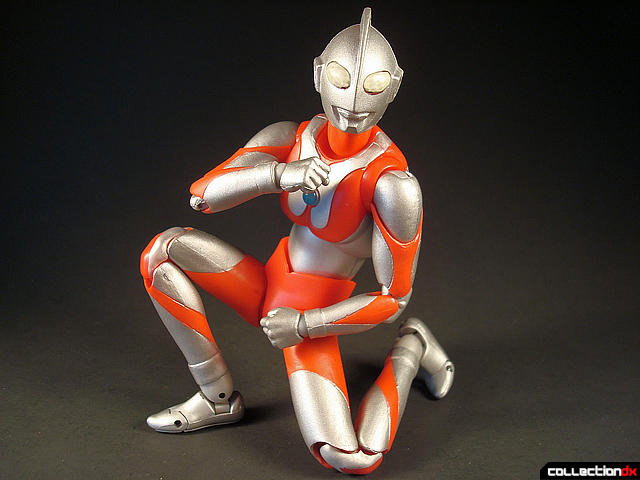 How about we check out some gimmicks? Here he is with his popular Specium Ray. I love how well this figure is able to achieve the looks of his on screen persona. 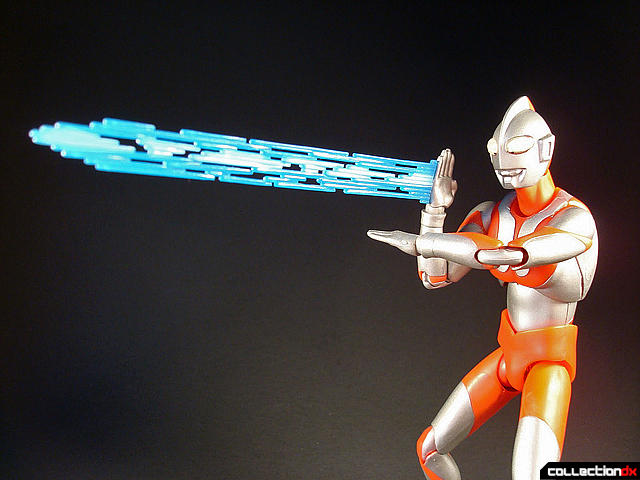 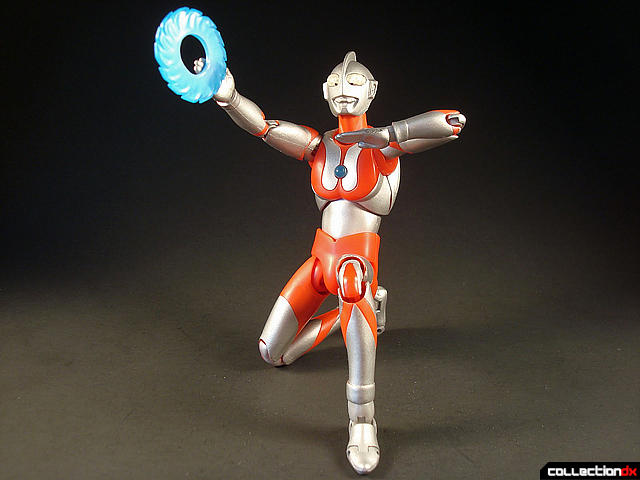 That's not all folks, he comes with this really cool PVC cape which is possibly heavier than the figure itself. Cloth would have been nice, but the wrinkles look more effective this way. 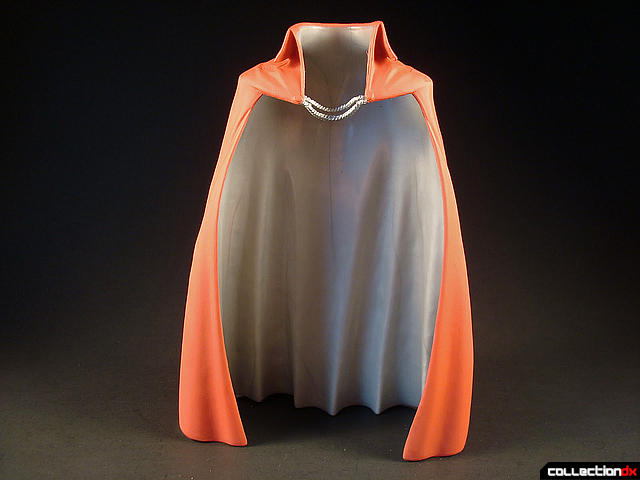 The cape looks and fits great on the figure. I really like the sculpt. 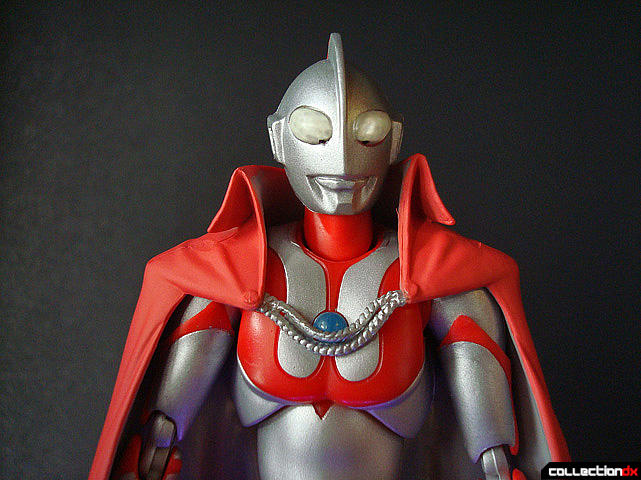 I also wanted to show off this really cool base. It's made by Kid's Logic and it's called the Cosmos Base. It comes in different colors. It boasts 8 LEDs which are lit up through a hidden switch on the steps. It was meant for Saint Cloth Myth figures I believe but the adjustable stand posts should suit other figures nicely. 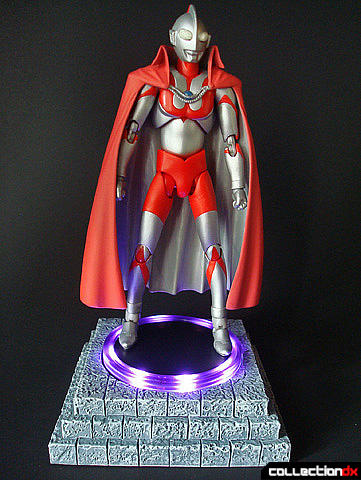 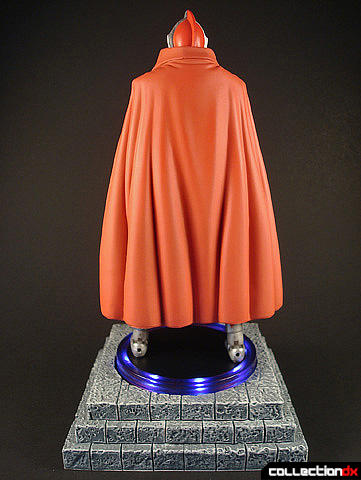 While my figure had no real problems standing on his own with the cape, any sudden movement on the shelf or table will cause him to fall. It turn out the cape is heavier than the figure. To remedy this, Bandai provides a molded plastic support to help keep Ultraman standing. 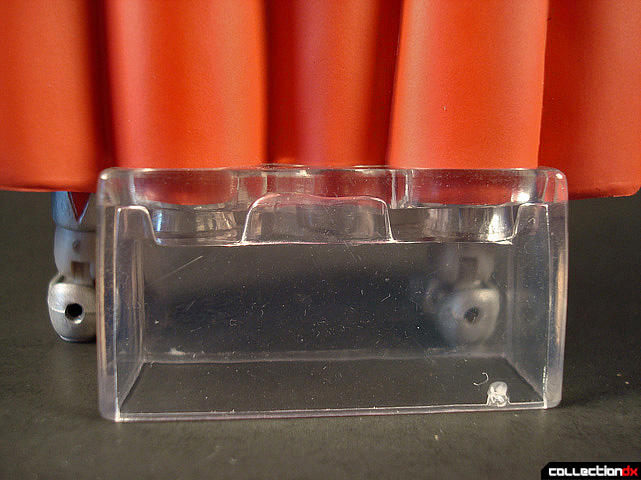 Do you know what happens when Ultraman is running out of solar power? The timer on his chest starts flashing red. Unfortunately Bandai did not provide a flashing LED gimmick here. Instead they give you a little red piece of plastic to swap out for the blue one. On a side note, I bought a $7 Ultraman candy toy a while back and it had a flashing LED gimmick. Go figure. 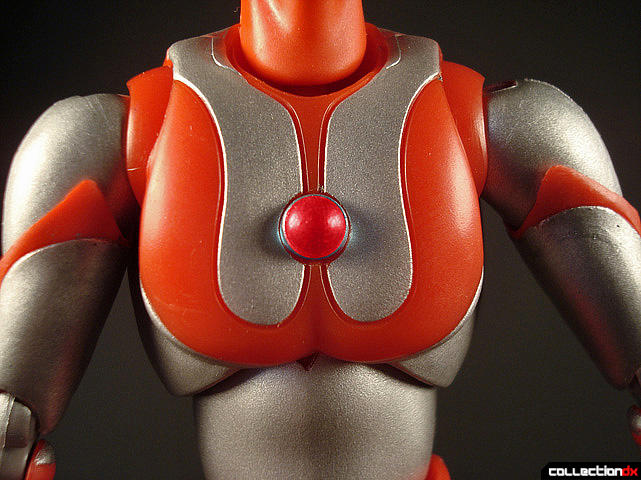 You've probably noticed that the word "articulation" and poses" appears throughout the Ultra Act reviews, and for good reason. If you like this figure, It's probably too late to grab one at normal price. I can't help feeling that it feels a little on the cheap side compared to later releases in the Ultra Act line. In my opinion, for the price it could have been better, at least maybe have an LED gimmick and more high-end feeling joints, especially the waist which falls out very easily. Unacceptable in something that costs $30 before shipping. I still don't regret it. It's a modern highly-poseable Ultraman. I like. SHUWATCH!! 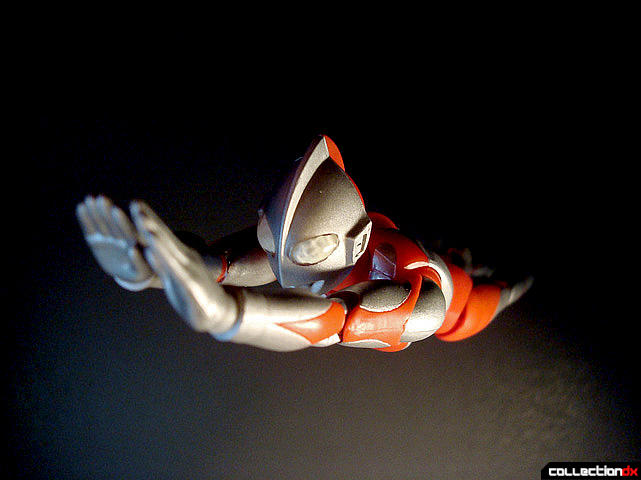 wow, he had better and more accessories than evil tiga...

Glad to see you apparently got one with minimal QC issues. I was lucky as well. As such, I just love my UM.