In the past few years,Muv-Luv has come a long way since its decidedly niche beginnings as a series of Japan-only visual novels. With two full-length anime TV shows under its belt, western audiences have found new inroads to the universe's blend of quirky characters, which have in turn been bolstered by a massively successful Kickstarter campaign (which I totally backed) to bring the original Muv-Luv PC game trilogy to the English-speaking world with a brand new (official) translation. As of this review, you can purchase the first game on Steam, which contains both Muv-Luv Extra and Muv-Luv Unlimited, with the final third of the story, Muv-Luv Alternative coming at a later date.

All this is a great boon to both existing and future Muv-Luv products, as now a wider audience can experience first hand what's so cool about these ladies and their sweet giant robots. Since this isn't my first outing with a toy from this particular sub-line, and the second time I've covered a Revoltech Takemikazuchi there's not much more I can add with this review. However, it is worth mentioning that Mitsurugi Meiya's Type-00R is the first of Kaiyodo's foray into Tactical Surface Fighters, and set a solid precedent for the ones that succeeded it. That is to say, the Type-00R is a solid action figure that works extremely well with the Revoltech format by combining extreme articulation with a wonderfully dynamic sculpt. While I lament that Kaiyodo has yet to resurrect their Muv-Luv Revoltechs, either as part of the Legacy line or through a Vulcanlog style collaboration, the figures are pretty easy to find at various online retailers. At the very least, I hope to remind our readers of these toys in a time when Muv-Luv's visibility is at an all-time high. 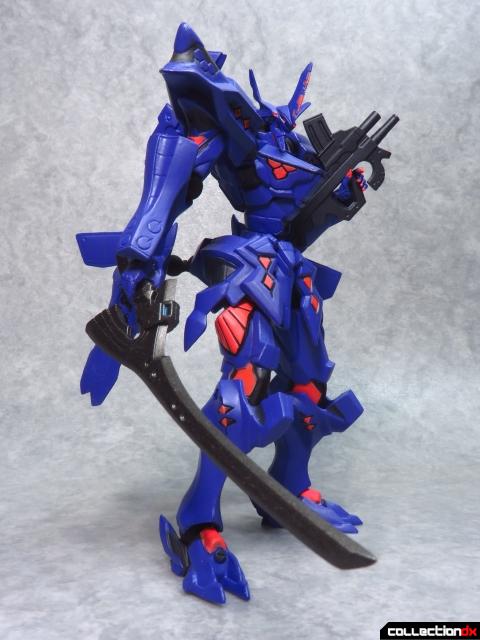 As a quick refresher, all of the Muv-Luv Revoltechs stand about five and a half inches tall, and they are nice solid PVC action figures. They also really live up to the brand's name, with a good number of the eponymous revolver joints allowing each Tactical Surface Fighter a wide range of posing possibilities. Meiya's Type-00R comes with nearly everything you see here, sans the extra sword and associated mount pylon. 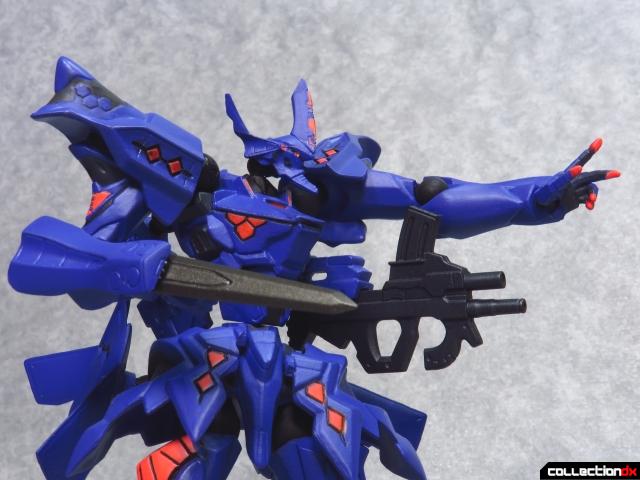 To date, the Muv-Luv Revoltechs still have the best implementation of the TSF's sub-arm gimmick with their mount pylons. By contrast, Volks was never really able to pull it off with their A3 figures, with most of them using a whole separate accessory to depict this ability. The one time the house of Dollfie did attempt to make a fully functional mount pylon on their Rafale figure, the whole thing ended up being a brittle mess. 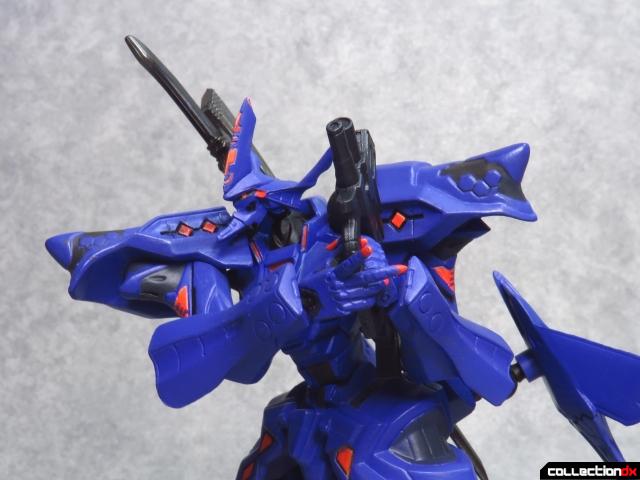 So if you want to have some actual fun playing with a Muv-Luv mecha figure, I recommend the Revoltechs over the A3 figures. Volks' take on the Takemikazuchi is especially limited by comparison to Kaiyodo's far more playable toy. 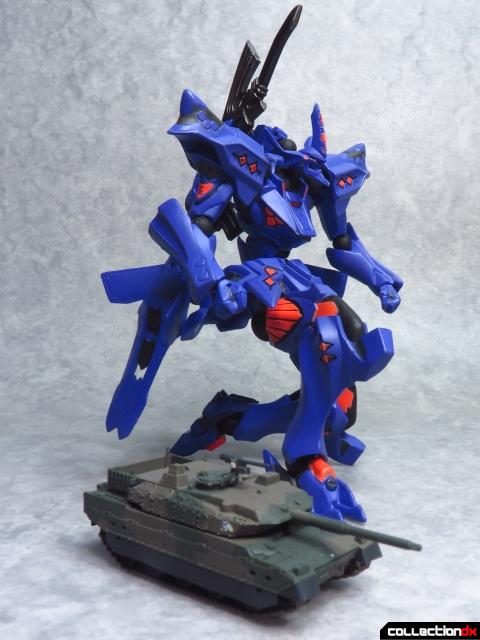 There's also the added appeal of the Revoltech Tactical Surface Fighters being just about 1/144 scale, so they can be displayed with many military vehicles. One neat thing about the Muv-Luv universe is how, despite the presence of giant fighting robots, most of the tanks and support craft are taken straight from the real world, so seeing a Type-10 tank next to a Takemikazuchi fits with the setting. 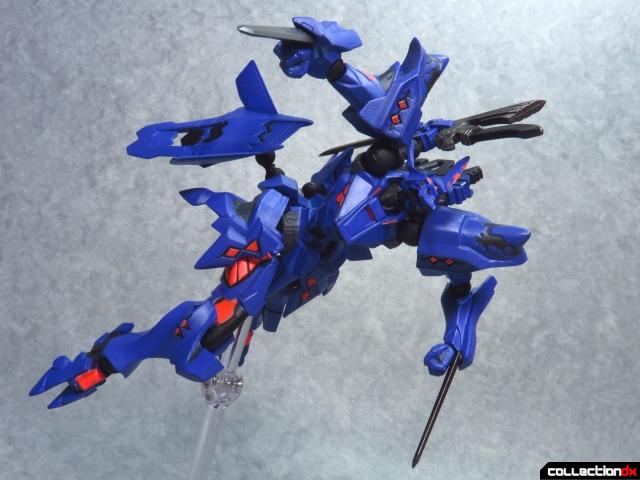 And these Revoltechs are readily compatible with just about any action figure display stand on the market (like a Tamashii Stage), so it's easy to ditch the iffy included stand for a more solid setup. TSF are all about three-dimensional maneuvering and these toys nail that look. 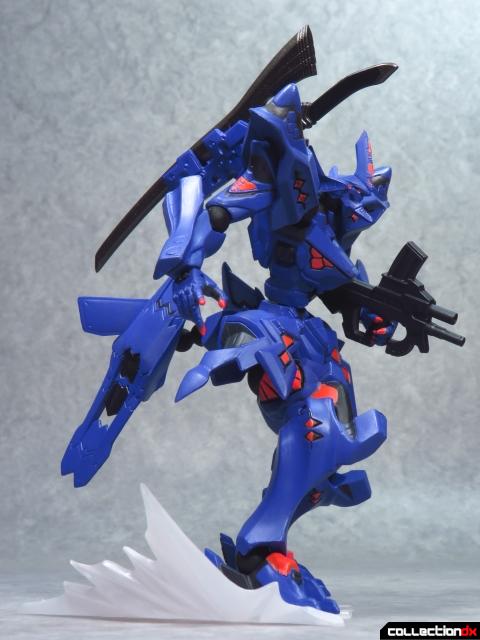 I've always found Muv-Luv's mecha to be very "athletic" looking, so Yamaguchi's rather Masami Obari-style approach to figure sculpting is a perfect match for these toys. 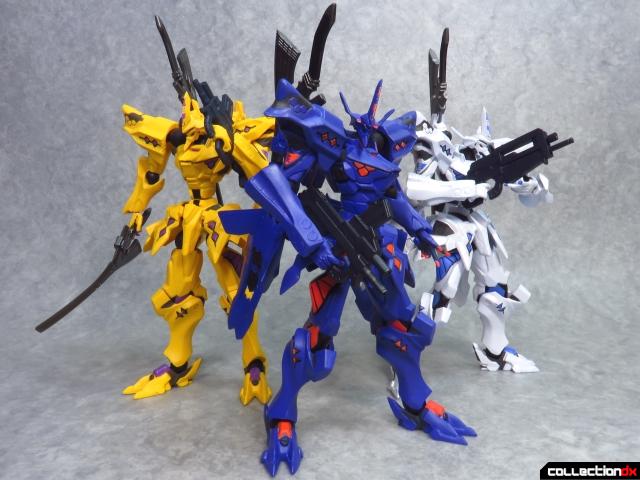 Meiya's purple machine stands together with my other Takemikazuchi figures to create a delicious grape jelly, lemon cream, and marshmallow fluff flavored team. 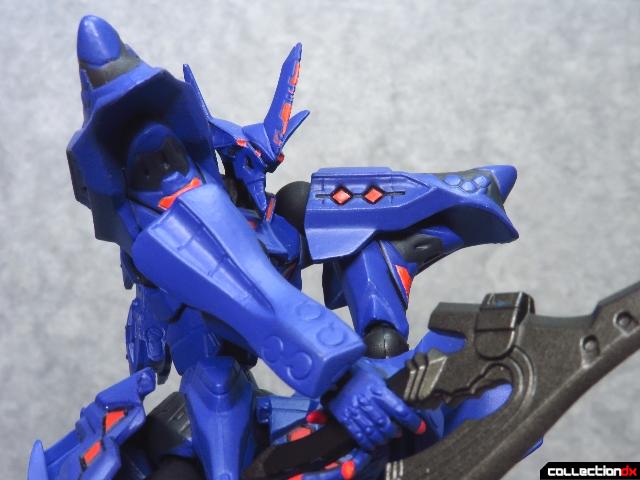 The Type-00R has one slight difference from the other versions of this figure, in that it has two tiny eyes painted onto a normally solid colored visor. On my copy, the right eye is a bit messy, but it sorta looks like it's glowing from certain angles. 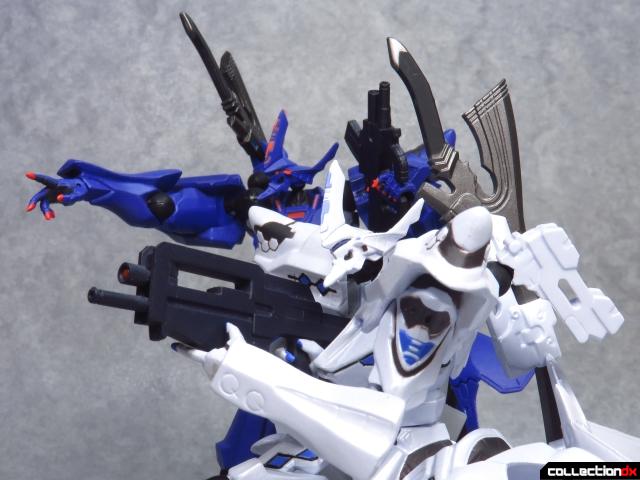 Along with a rifle borrowed from the Shiranui figure, these two TSFs can recreate some iconic moments from Muv-Luv Alternative. 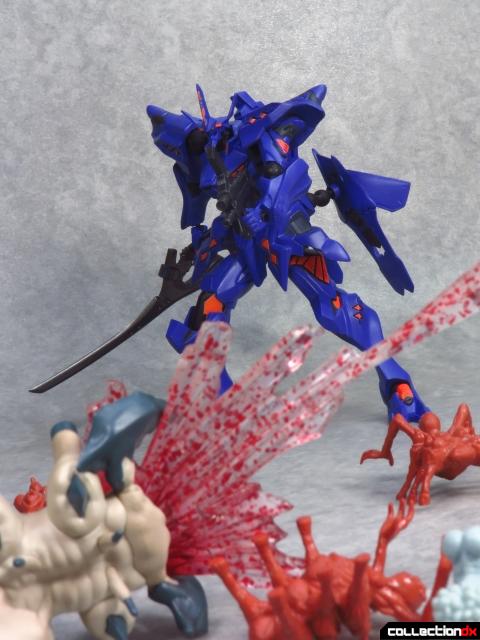 Mitsurugi Meiya stands strong against the endless hordes of BETA.

At the end of this review, I am reminded of why I fell in luv with these figures in the first place. For all Muv-Luv fans, whether veterans or neophytes, the Revoltech toys are top-notch hand-candy for protecting your collection against the BETA, no matter which TSF you get. While the line sadly fizzled out after the promise of four more molds (an F-4, an F-15, a Rafale, and a Mig-27 were teased by Hobby Stock in silhouettes), there appears to be enough of these toys still hanging around at various online retailers that finding a good deal on one should not be a problem.

6 comments posted
Wait, we could have gotten a

Who do I have to bribe to get Revoltech to start making these again?

Yeah the old Hobby Stock page about these is still up.

You can see the teasers in the line up.

Ugh, that hurts just looking at the silhouettes.

We have to be strong in these difficult times.

Hey, just wondering where you got the info about the Rafale mount pylons as I was considering purchasing one. Thanks!

He has one (that used to be mine)