Ah, bootlegs. Don't we love them so? As collectors, we tend to look out for neat knock-offs, as they are cheaper, although more or less lower in quality, than the original it is based off of. The figures I am reviewing,  the Transformable Robot Masters, are bootlegs of a series of similar transforming robots from the well-established Brave (or "yusha") series. I'm not entirely sure which character they are a bootleg of, because they have been re-tooled to such a degree, but I have to guess either Dag Fire from Dagwon or Dran from Goldran. 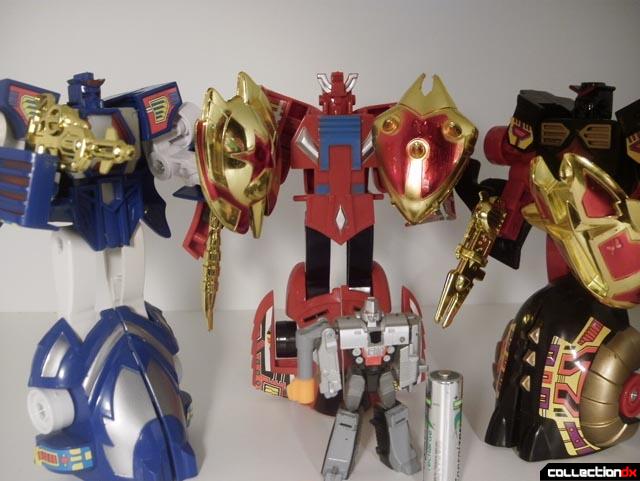 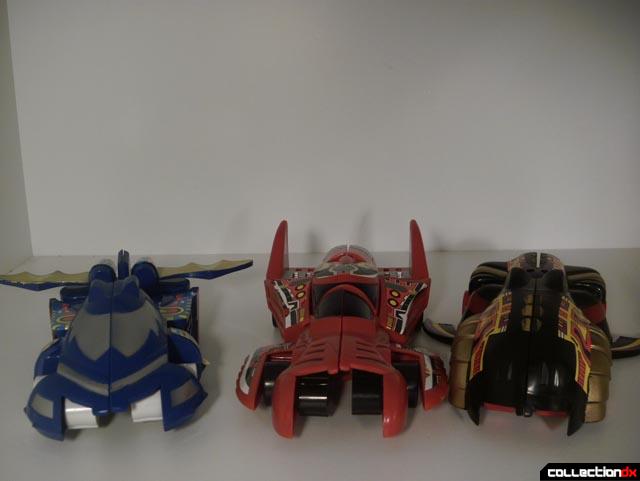 These three robots are pretty nifty, seeing as though their car modes mostly look like rejected Batmobile designs. Transformations are exactly the same for all three, but otherwise they are pretty unique, with each of them being their own individual car shape. They are mostly detailed with stickers rather than paint, and even then they don't fit the theme of the toy for the most part. Anyway, on to the individual robots.

Ruby Car-Bot
The bat-mobile-ish Ruby Car-Bot is the obvious Red one out of the trio. Starting in car mode, it is mostly coloured black and red with a spot of silver. The stickers kind of out-do it, though, by breaking up the color scheme and whatnot. Nice to add a rocket and some high fins to the back though. 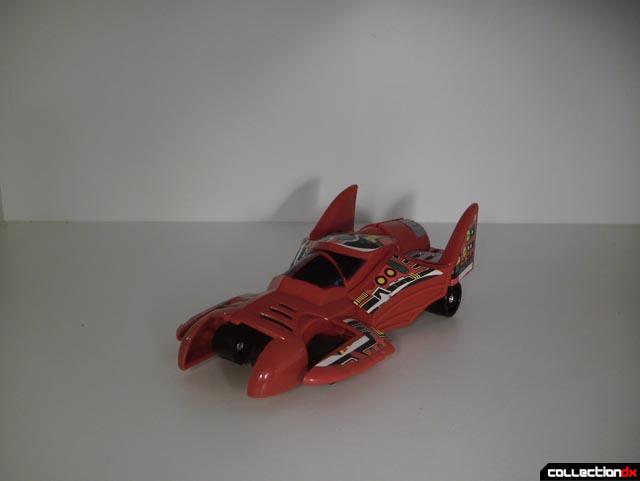 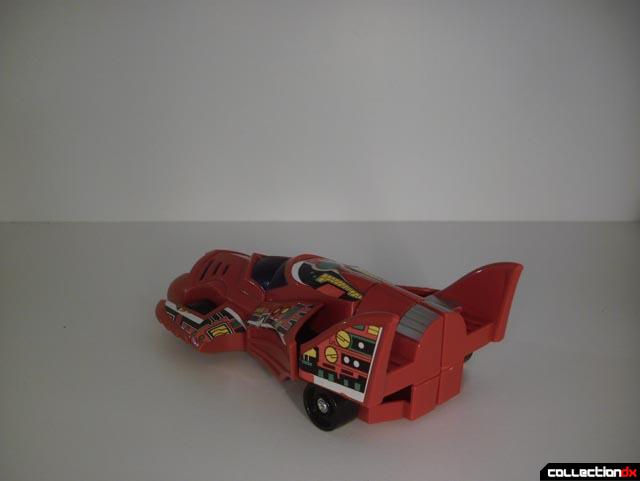 Transformation into robot mode is simple, just fold out the front section to form the legs, then pull out the sides to form the arms and fold out the shoulders. Like I said in the opening paragraph, identical to Dag Fire and Dran. 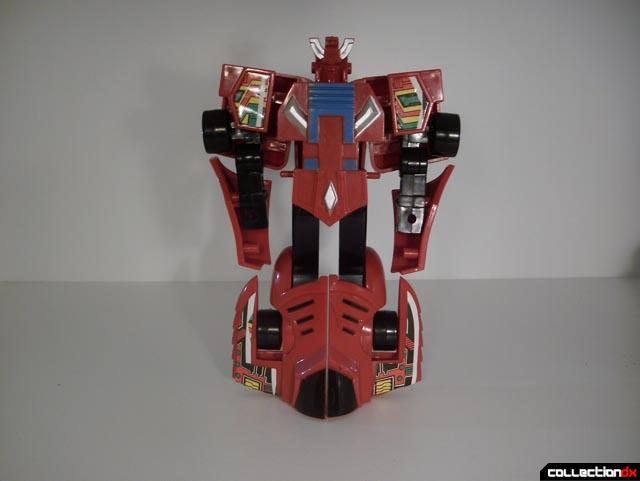 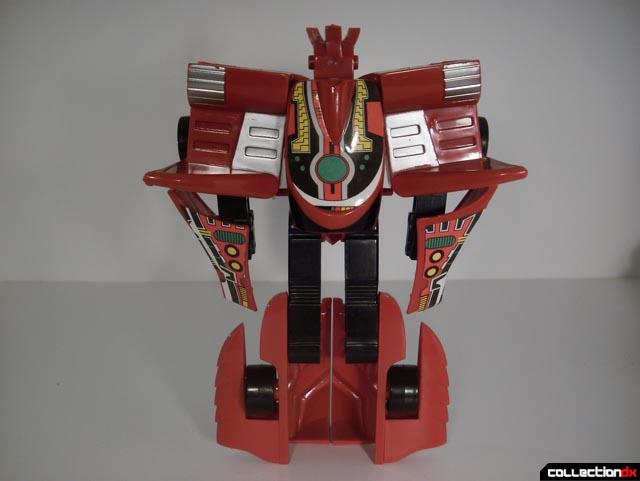 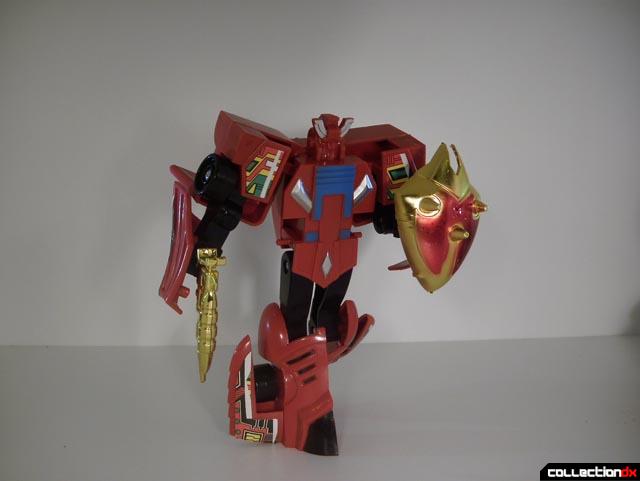 The robot mode is pretty cool, with a dab of blue added to the colour scheme for the chest, although it is rather poorly applied, as with the paint app for the head. Hey, it's a bootleg, what are you gonna do? Articulation is fairly limited, but is not a "brick" by any extent, as he has knees, hips (although only backward with the 'skirt' blocking frontal movement),  and elbows. As with the others, he comes with a generic chrome gun and shield, which oddly has spikes on it. I guess he wants to beat some things with it if the gun's not enough, which I have unfortunately broken. Overall, he's a nice robot. NEXT!

Sapphire Car-Bot
Next up is Sapphire, the blue one. As you can tell, the car mode is mostly covered in blue, broken up by some red on the sides, some silver for the cockpit and headlights, some cream for the winged spoiler, and those blasted stickers, although not as prominent on this figure. Transformation is exactly the same as Ruby's. 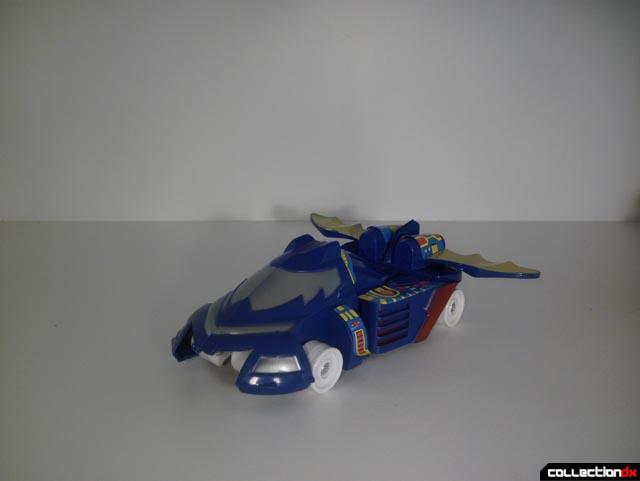 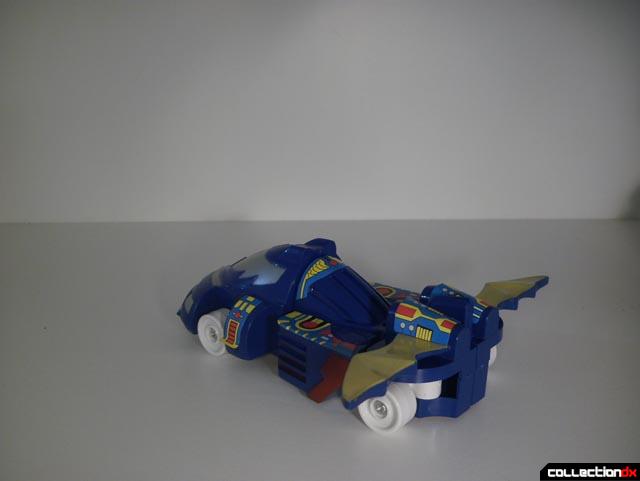 The robot mode is... well... very white. As you can see, a fair amount of white has been added on his limbs, along with a hexagon-shaped chest with some read and silver. Again, the paint isn't that great for the chest and face, and not that many stickers. Like Ruby, Sapphire has identical articulation, and a generic shield and sword, but this shield has a star. YAY! 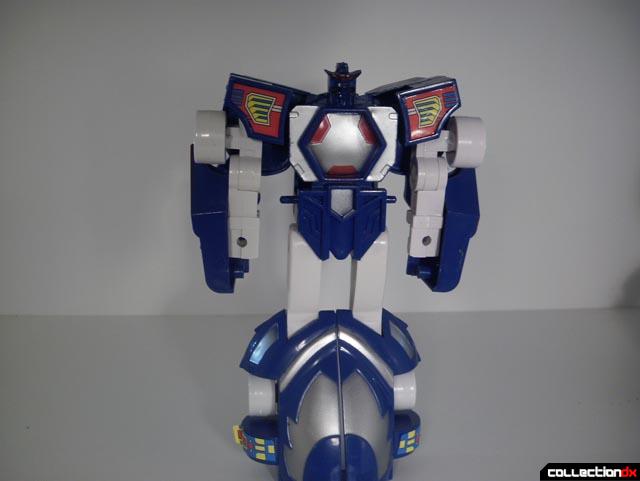 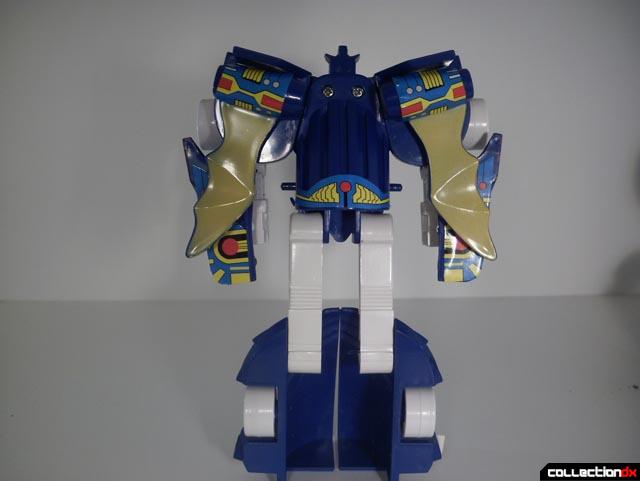 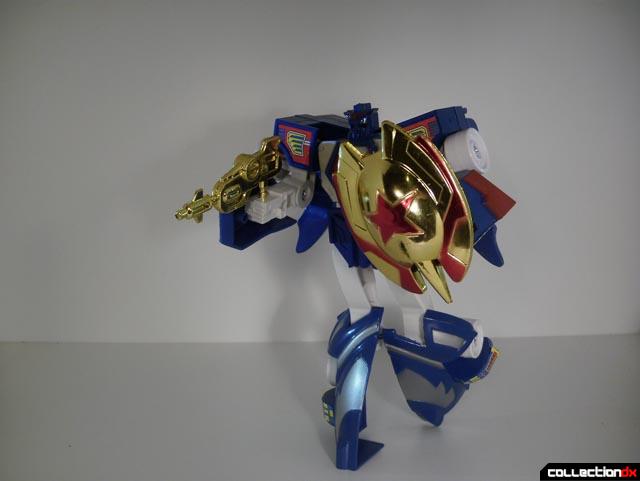 Onyx Car-Bot
Kind of breaking the combo of robots named similarly Pokemon games but rather being named like a Pokemon himself, next is Onyx. His car mode just screams Big Bad Decepticon to me, as his colour scheme is mostly black and red, but  again with so many blasted stickers! I have to admit, they do give the car a bit of Decepticon purple to add to the evilness of it. This one is kind of the odd car out as it has wings on the sides, which is just silly because it does not look like this thing will ever get off the ground, despite the fact a rocket has been detailed into the back, similar to Ruby. It also looks like no one is ever going to see out of that cockpit, with the over-the-top front in the way. Transformation is completely identical to the other two. 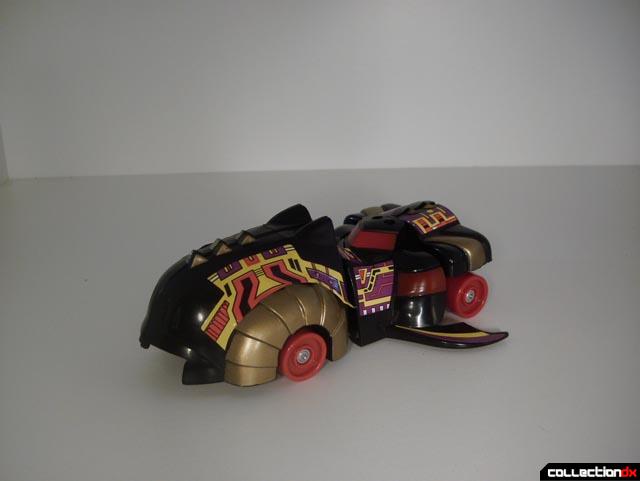 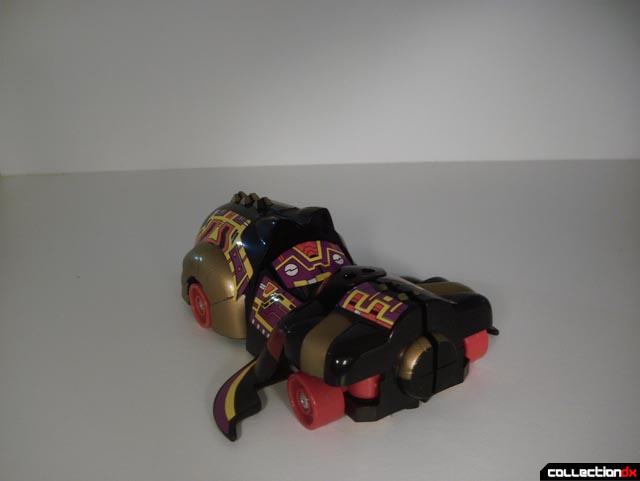 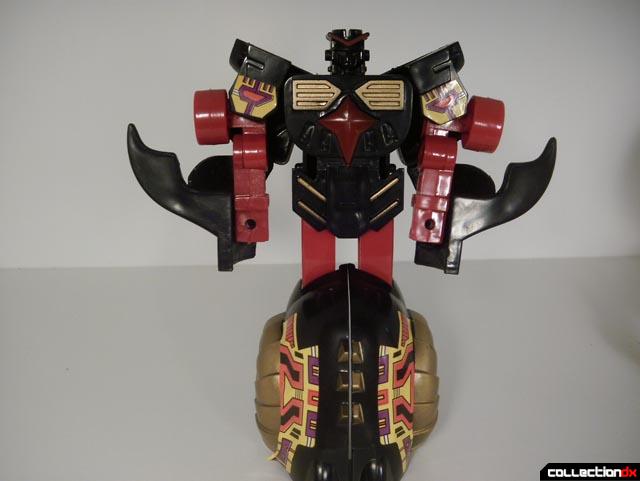 Bot mode is evil all over, with red in the limbs, chest, and head-crest just add to the evil style of the figure. the wings are a bit out of place on the arms, though. The stickers still clutter the detail, unfortunately. The chest is interesting  with a jewel in the middle. 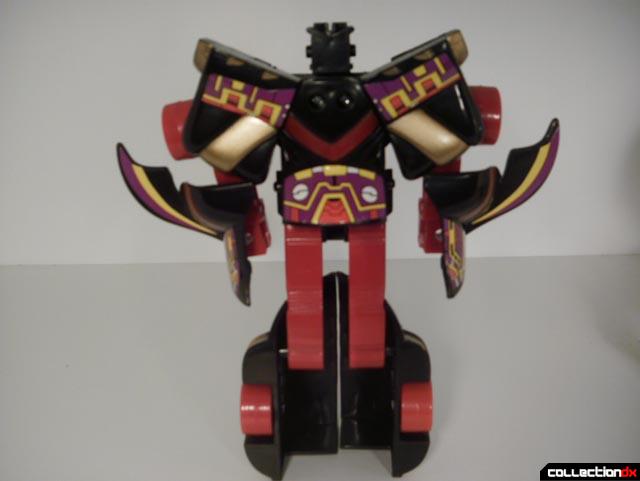 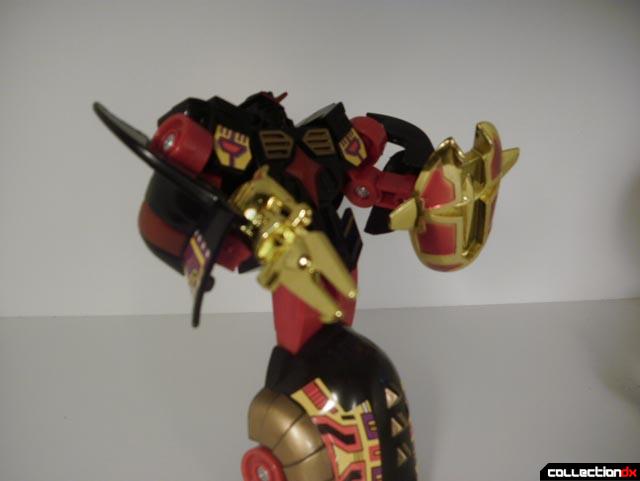 Quality
The plastic on these guys is fairly good, but the chrome weapons could use some work . I've already broken the barrel off Ruby's gun and have blu-tacked it back on, but overall the quality of the materials is slightly above average.

Packaging
The packaging used is fairly similar to that or your regular Voyager-class Transformer, with false-advertising all over it. "Most new!" eh? The packagine has no indication of what brand it belongs to, however, or who assembled it, so I believe this would be hard to find outside of a two-dollar shop. 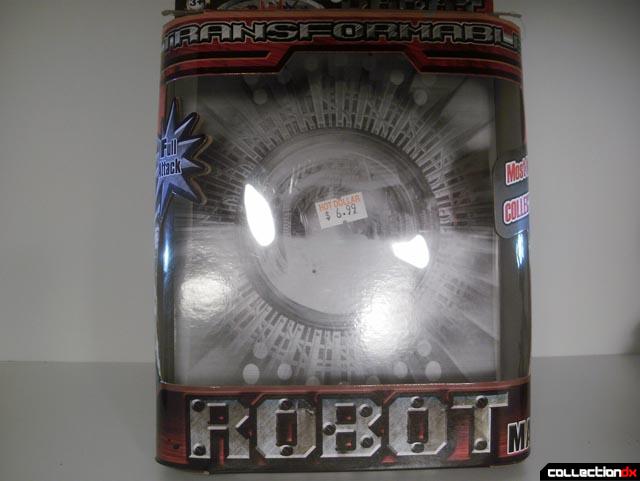 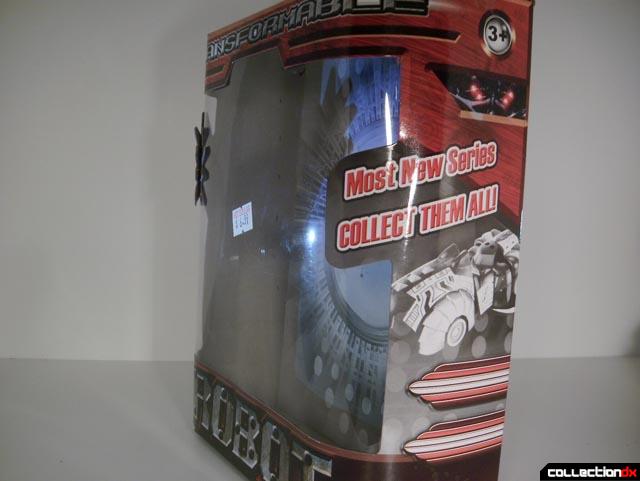 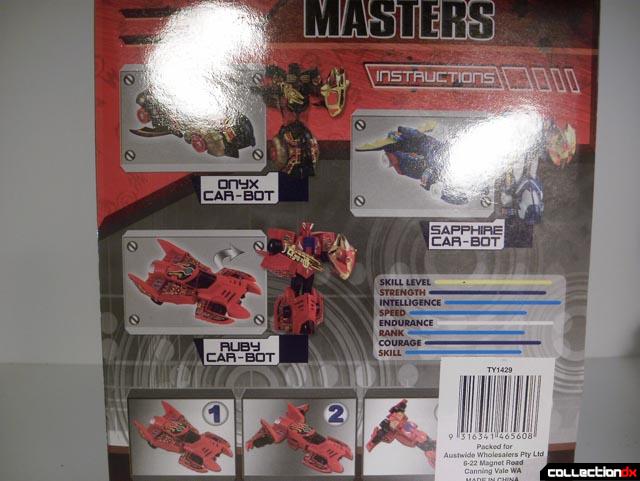 Price
Each are priced at around AU$7.00, which is pretty good value for something of this quality and size.

CONCLUSION: Buy or Not?

These figures are a must-have if you are a collector of Transformers, especially car-forming Decepticons. Robot collectors may want to check them out, but they may just come across as a generic transformer. It all depends on your taste in collecting, and are worth checking out if you are interested.

bootleg quality I say, if you open a box and the toy doesn't break by itself...

woah! this comes as a nostalgic post for me. when i was a lot younger i saw all three in a toystore and i had this thing for transforming car robots as a kid so i'd bought one. took me forever to choose but eventually settled on the sapphire one. what's interesting though is i would venture to say that the one i bought was of better looking quality! these seem to be bootlegs of those semi-bootlegs! all the blue plastic on him was this really cool blue chrome and his accessories were chrome too. a silver gun and silver shield with red detailing. the molding on mine looked just a little sharper... oh, memories.

This is rather interesting because I DID think these were knock-offs of takara's brave series. And after posting the reveiw I found out that the packaging itself is a knock-off of the transformers robot masters line. strange.....

no, it'd be apt to call them knock-offs of a brave mold i think. a case of copying that car who's name i forget right now and changing some details around like only china can. still an interesting anachronism, the three you have