How about that Gundam Wing Endless Waltz? A bunch stuff sure did happen. In the TV series, Zechs Merquise attempted to reach all the heights of Char Aznable's career by dropping a big object on Earth. So naturally in Endless Waltz they made him a good guy.

Operating as one of the Preventers, an elite group of main and supporting characters dedicated to stopping armed conflict, Zechs fought against the army of Mariemaia. His steed is the powerful Tallgeese III Mobile Suit which he got from... somewhere. This one-of-a-kind machine is matched in power only by the angelic Wing Zero.

So once again, Bandai is giving us another Robot Spirits figure of a popular Mobile Suit. All because you (or the Japanese market) asked for it! 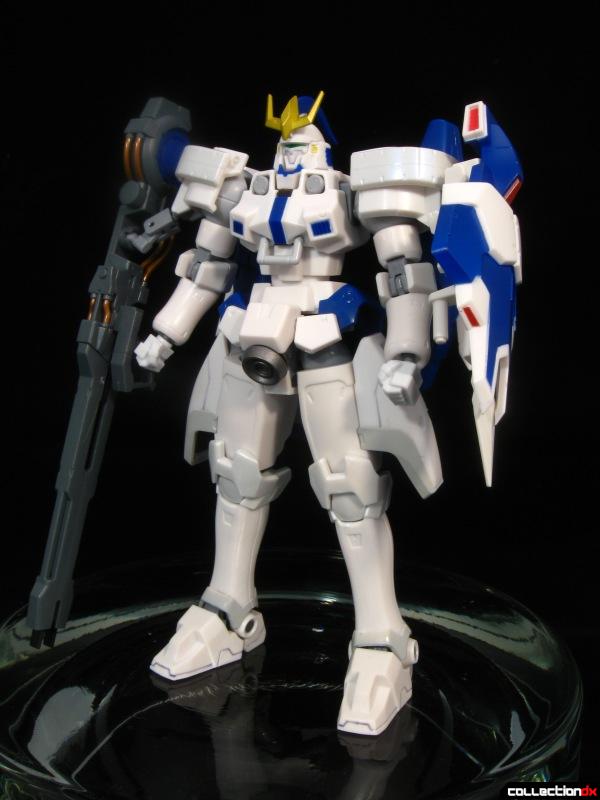 Standing around five inches tall, the Tallgeese III is a very regal looking Mobile Suit. From its kingly white body highlighted with royal blue to the helmet like head adorned with a sparkling gold crest and blue plume, the Tallgeese III is a design that commands respect. Practically every detail is well represented on this figure with a light wash in the panel lines to accentuate its form. The proportions feel about right, although I do have one issue with its thick thighs. While they do perfectly frame Tallgeese III's anatomically correct crotch thruster, they don't quite come together for a neutral stance which leaves the figure in that stock Hajime Katoki pose with the legs slightly parted. 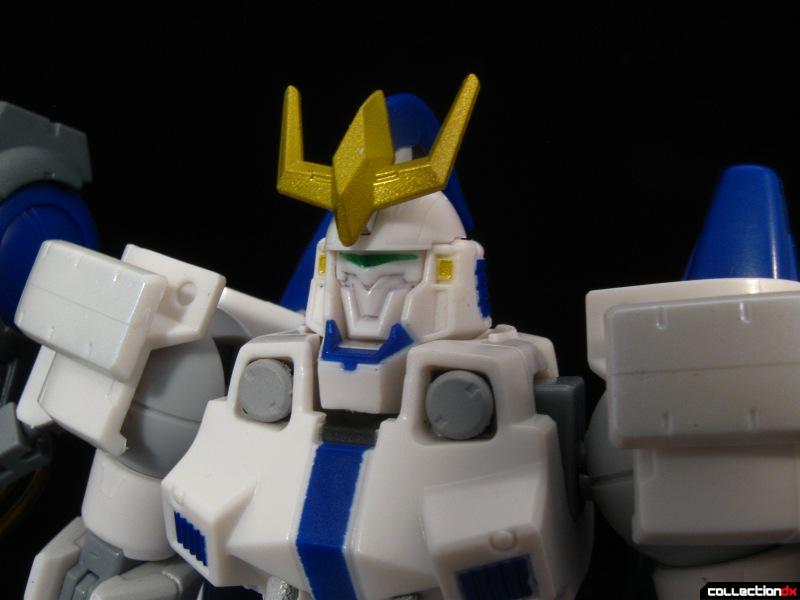 The gold crest on the forehead is one of the more eye catching parts of figure. The whole head is well done in terms of sculpt. However there is a problem with the articulation. 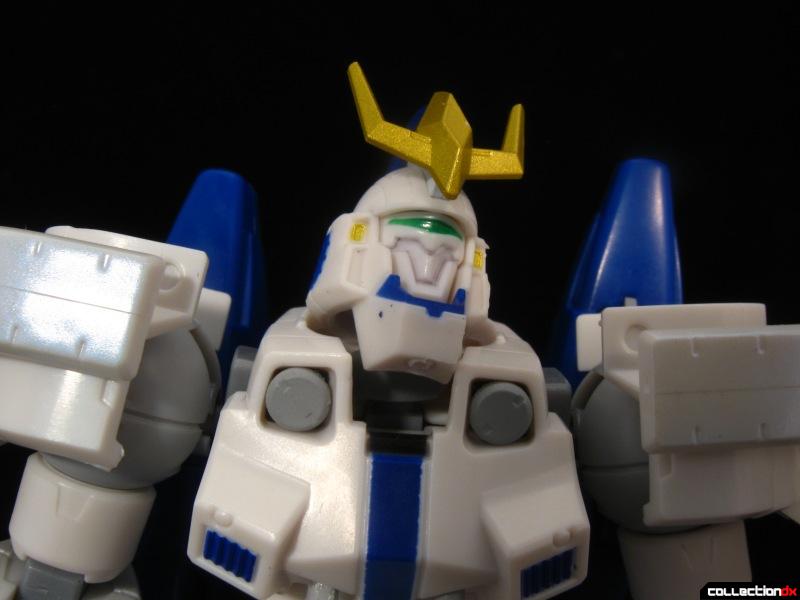 So this is about as far as you can move the head either left or right. A common problem among the gaggle of Tallgeese figures is what to do with that little block under the chin. Some have it as part of the collar while the more recent HCM Pro Tallgeese I hinged that chin block and put the rest of the head on a ball joint for maximum articulation. Here they just stuck the head on a useless double ball joint and called it a day. Not a huge deal breaker, just kind of odd in light of previous Tallgooses. 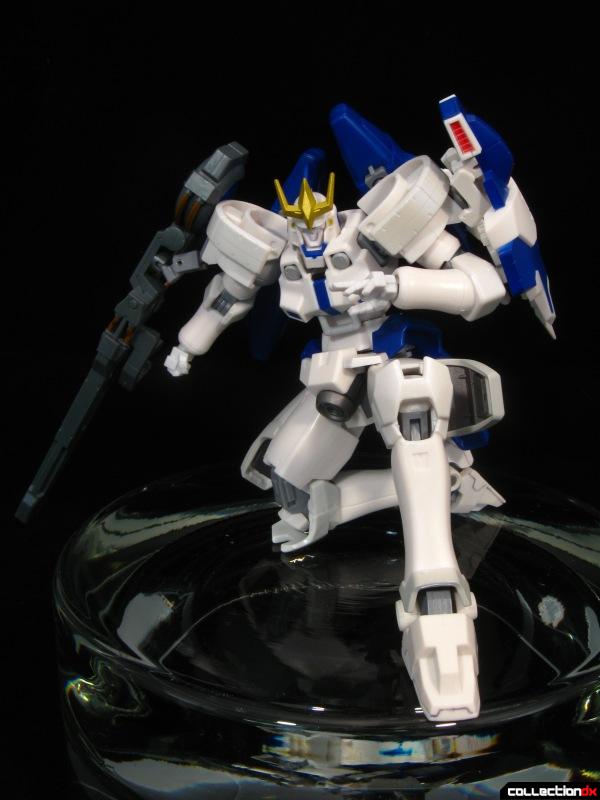 The articulation in the rest of the figure is better executed than the head thankfully. You've got double jointed knees, deep bending elbows, and a good crunching abdomen to play around with. While the tiny front skirt and blue side skirts are articulated, the rear skirt is not so you maybe bump the legs into it while posing. 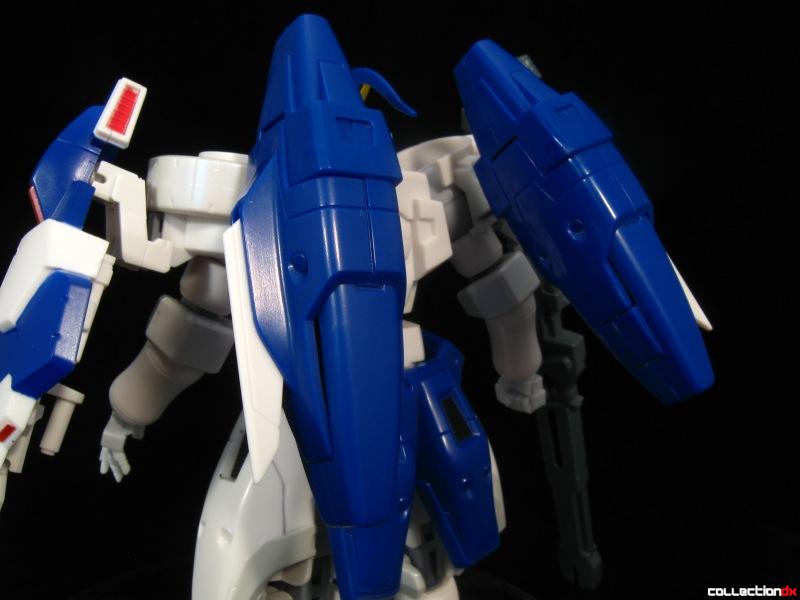 Like every Tallgeese, this one has a set of massive boosters affixed via ball joints attached to hinges on its shoulders. 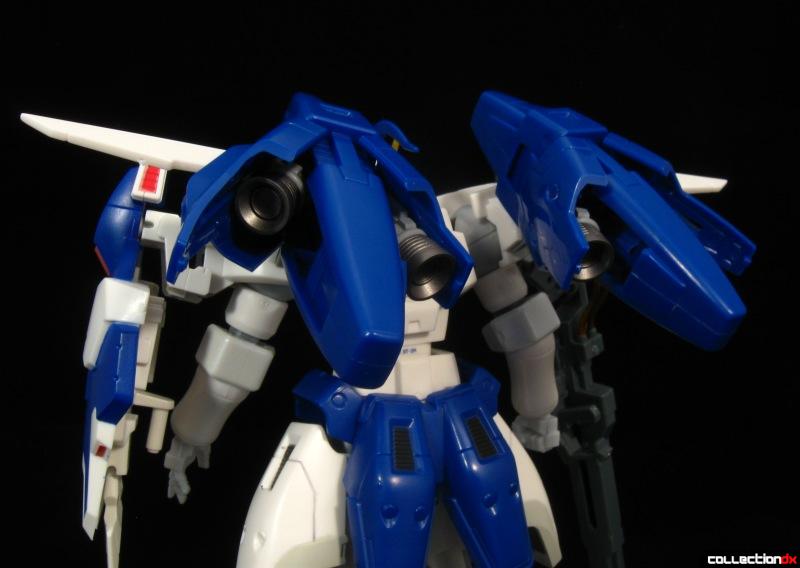 The small white wings on either booster can be swept outward and each booster opens up to reveal a pair of rocket engines. You need a good fingernail to open the boosters but the two sides are geared to move together. If you pull them too far they will become desynchronized but can be easily popped back together. 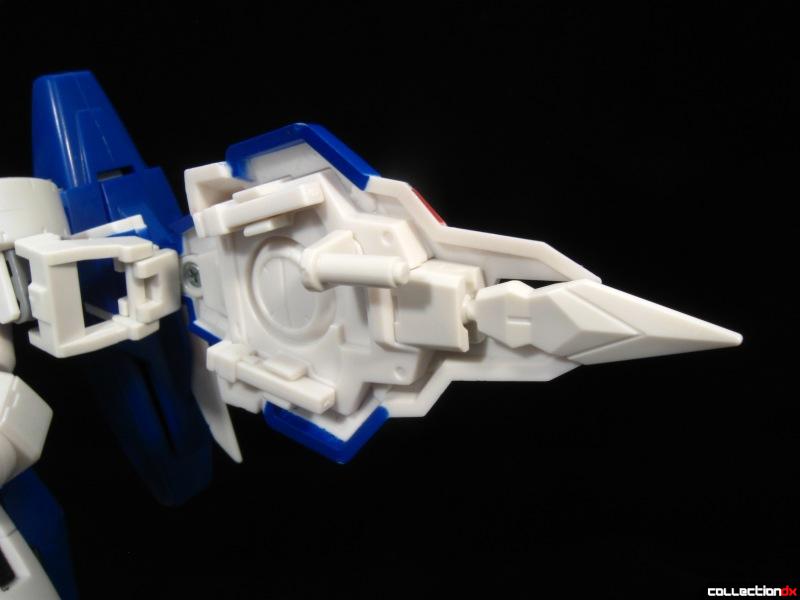 On the figure's left arm is a shield. This part is as well detailed as the Tallgeese III itself and is attached to the upper shoulder via several different hinges and ball joints. Underneath is a pair of removable beam sabers (guess how many blades they give you) and the tip of the Heat Rod weapon. Now you can also see a small movable handle near the bottom on the shield but just forget about that. Bandai decided to include two hands for holding things, both of which have rectangular holes which do not fit around the shield's round handle. 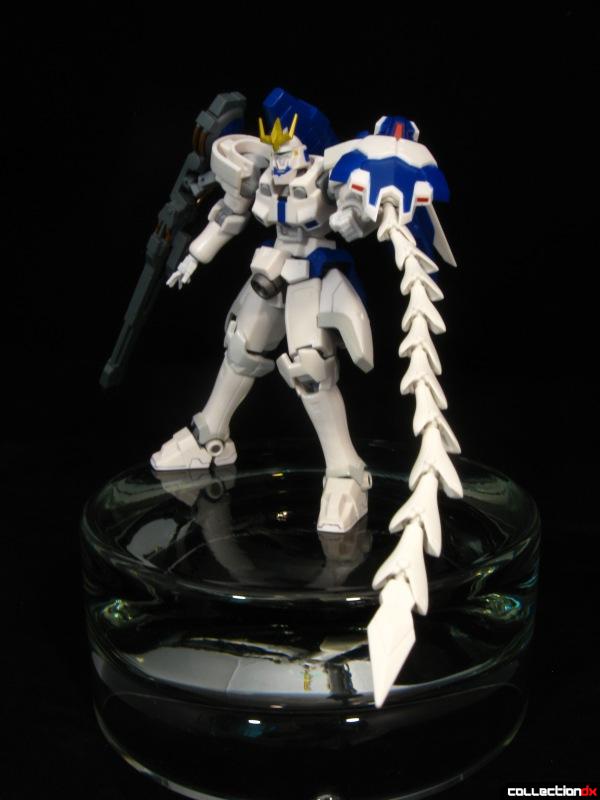 Simple pop off the tip and reattach it to the full Heat Rod and you're ready to wave around a hot, manly whip. 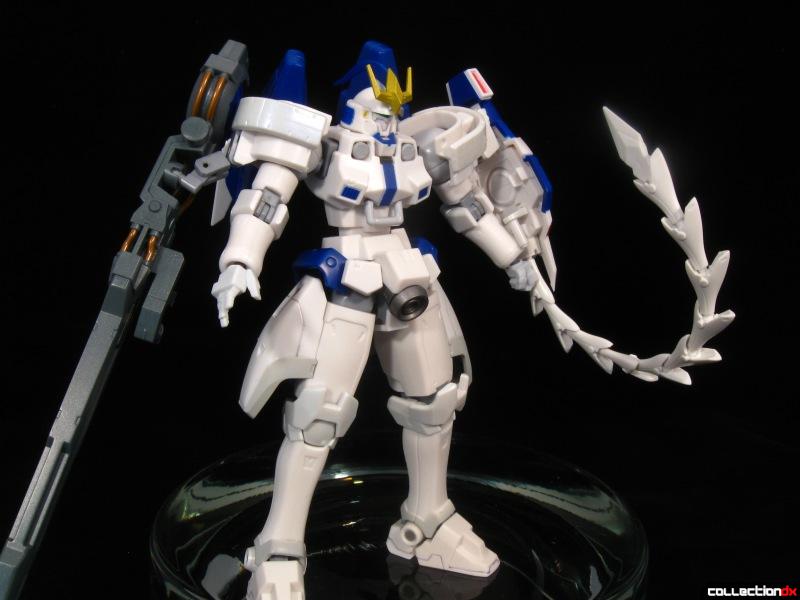 Using numerous ball joints, this segment Heat Rod can assume any number of positions. It has that right amount of stiffness so it stays where you put it. Sadly, the Heat Rod fully erect can tax the main hinge of the shield. It's not like there's some way of using the arm to prop up the shield or anything. 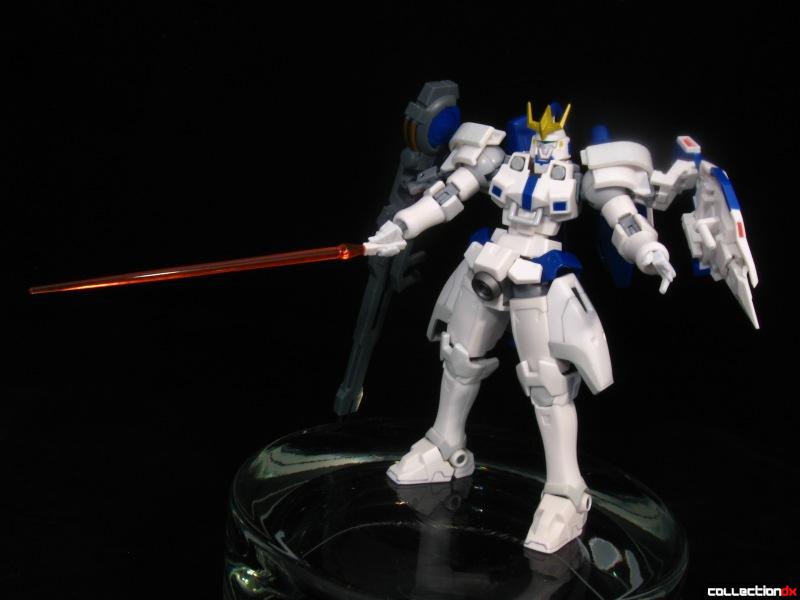 So if you guessed that the Tallgeese III would come with two beam saber blades, you are dead wrong. You just get one and you will like it. Either of the normal holding things hand can wield the beam saber. 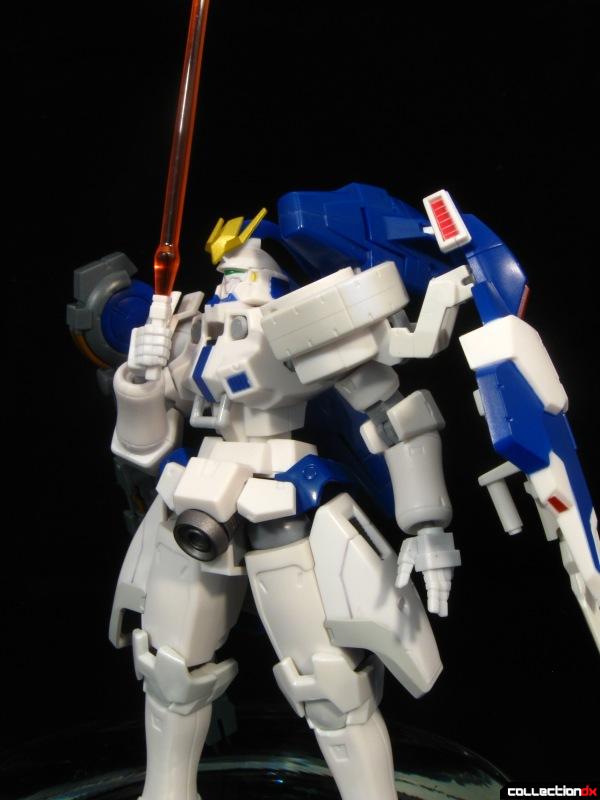 There is also a special right hand included that holds the saber at a more characterful angle. The hands are attached via a double ball joint so this only adds to the figure. 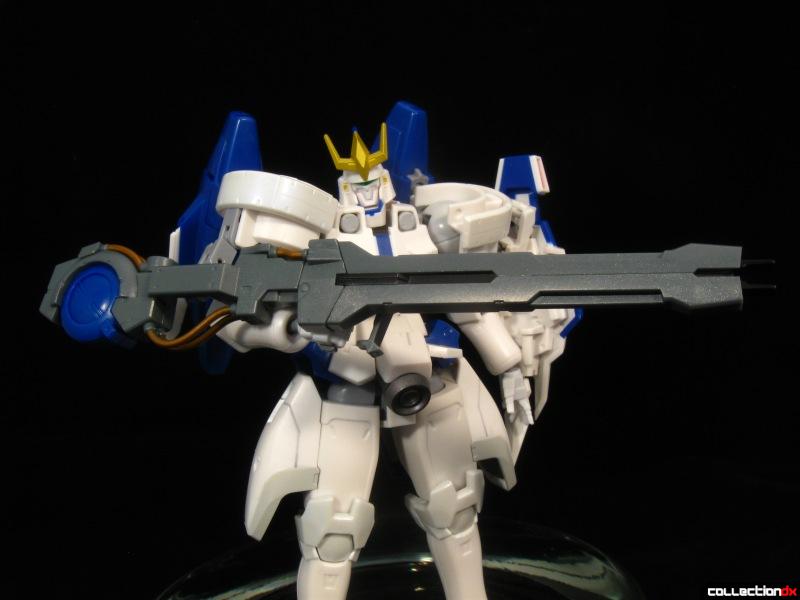 Of course the elephant in the review is that big ol' Mega Cannon. This detailed combination of tubes, a hockey puck, a tuning fork, and a gun is attached to the Tallgeese III's right arm. 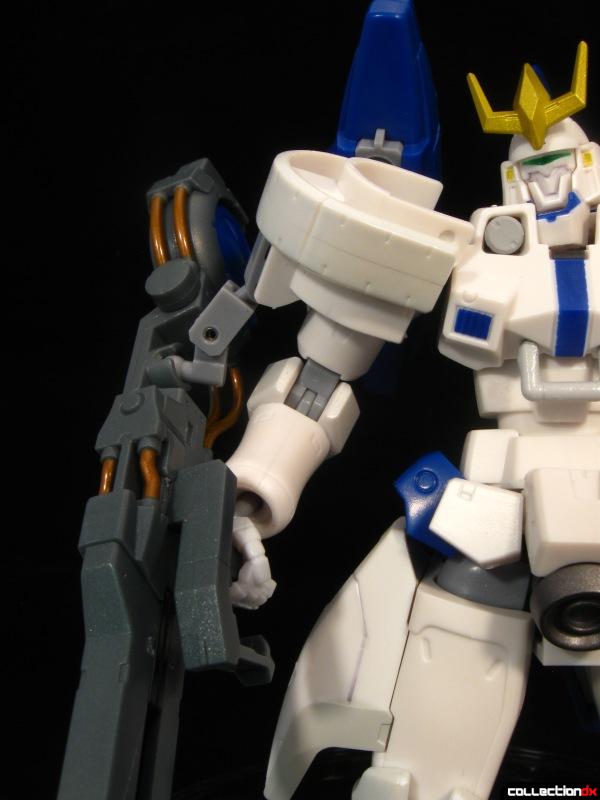 The Mega Cannon mount has always been a sticking point on Tallgeeses. With this figure it's kind of awkward. Yeah it has a lot of joints but I can never get it positioned just right without popping the hand off the wrist. No matter what, it always looks kind of weird. Oh well. Having to manually aim and fire a weapon that is bolted to your arm is so quintessentially mecha. 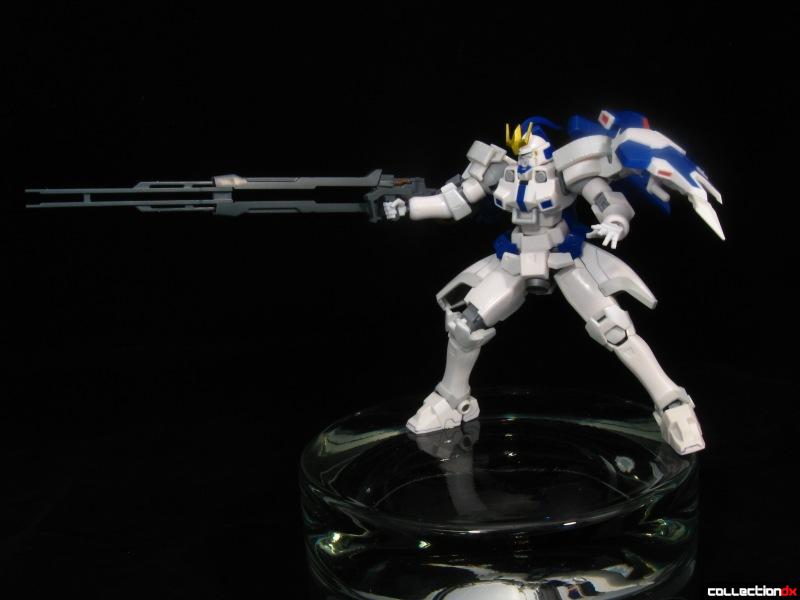 With a little easy parts swapping (and patience in posing) you can get the Tallgeese III into firing position. Everything is very stable.

Oh and Tallgeese III has a hole in its rear end for a Tamashii Stage display base. I'd show you that but I will never get around to buying one of those. 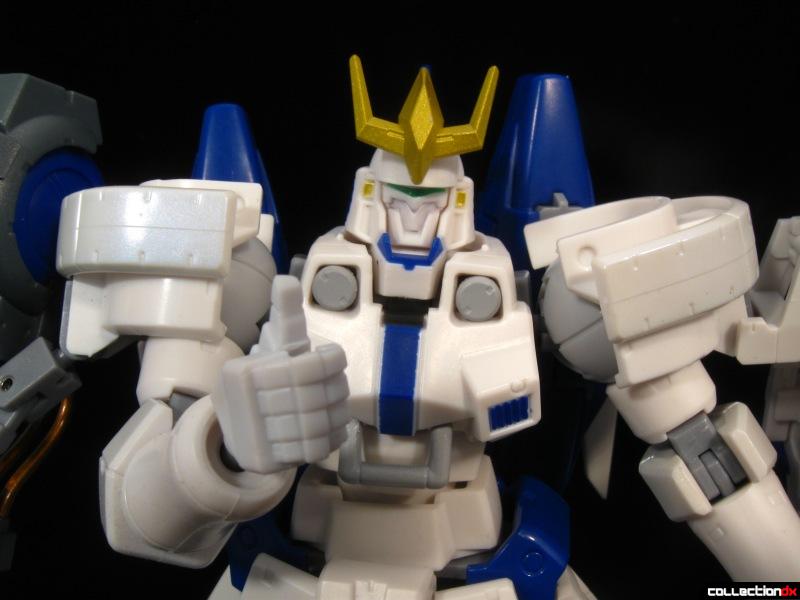 Overall the Robot Spirits Tallgeese III is an alright figure. While it does add a lot in terms of articulation due to the level of engineering common to the Robot Spirits line, it doesn't do a lot to fix some common Tallgeesian issues. Again, not a bad figure by any stretch. It is simply a good one that could have been just a little better.

"each booster opens up to reveal a pair of rocket engines."

Is there some actual engine detail behind those rocket nozzles? It looks like there might be in the photo. It would be really nice to finally see a Tallgeese with some engines in there, instead of big bell nozzles hanging off of flat sliding plates.

Bandai, you BASTARDS. What is WRONG with you?

"Bandai decided to include two hands for holding things, both of which have rectangular holes which do not fit around the shield's round handle."

Hahahaha what the HELL. This is just... at this point, this has to be a joke on Bandai's part. How can they make so many tiny oversights in a figure (and toy line) that's otherwise characterized by precision and attention to detail.

This is a great shot.

Aside from the fact that it looks like the generic blow-me-up-please Leo mobile suit grunts (which look TOO generic and dull for my tastes), the one big issue I have with all three Tallgeese designs is the main boosters. Thought the opening doors-thing is pretty sweet, WHY are they mounted to the back of the shoulders??? That means it can't dodge or fire when it's boosting, making it rather vulnerable in both cases. I just don't get that...

I saw the Arch Enemy version at TRU a number of times, but I was saving up for the Wing-ZERO Custom (which I eventually got) and missed my chance to get the Tallgeese III.

Tallgeese 1 was pretty broken in the first game too

but honestly Jeva, I get the feeling you neither watch the video nor read my reviews because you always ask the most inane questions every time i post something you're mildly interested in (and seem to know very little about) even if your question was answered somewhere in either review

It's a real shame about the articulation on this thing. A pull down leg joint like the ones used on the Figuarts legs would have helped make this thing a bit better of a toy. : S

I'm not a real big fan of the source material (and even then, I like the Mk II better), but that chin block is god awful. It seems almost worse when I think about someone spending the time to model that in CAD and going, 'Yep, looks good'.

For reference, the HCM Pro Tallgeese handled the chin differently.

Honestly I'm kind of warming to the figure.

These are nice, but MAN, the price is killer on these things. I think it's too much for what you get.

I kind of wish this had better paint apps... the only detail here is the same flat blue everywhere. I mean I know that's inherent to the design of the Tallgeese III, but I feel like they could have done something more than just bare white plastic. :(

Looks nice, but I'm actually happy with my MSiA Tallgeese III. Still...this is nice! I may break for a standard Tallgeese, but maybe not this one. Thanks for the review!

because i'm a huge liar, i found out the shield handle does fit inside the hands provided.

oh well the review is set in stone.