The world of Muv-Luv Alternative is not only under threat by the marauding BETA, but also the terrible machinations and manipulations of power hungry bureaucrats and the aspirations of apolitical dissidents burdened with righteous purpose. The closing arc of the Total Eclipse anime introduced a group of radicals called the Refugee Liberation Front, who managed to infiltrate and commandeer a great deal of its military equipment include most of their Tactical Surface Fighters. Unfortunately for our heroes in Argos Test Flight, the Soviet Union was keeping its secret top of the line Su-47E Berkut TSF at the base and it too was taken by the RLF for use in their insurgency.

The Berkut as seen being used by the terrorist leader, Christopher. This 3rd generation Tactical Surface Fighter is known for its sheer power and menacing appearance. 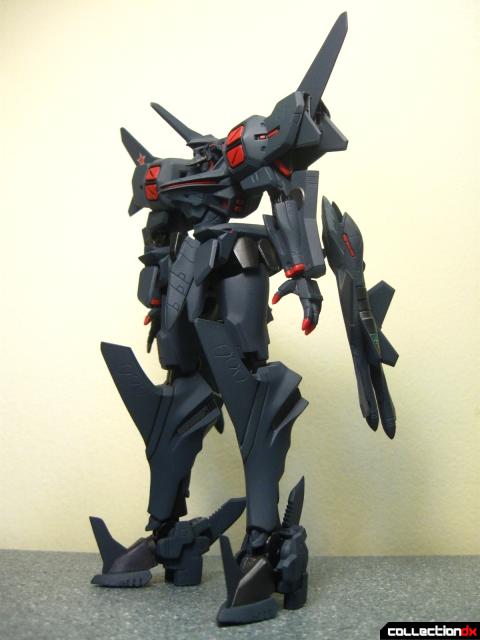 The Su-47E Berkut was the third to last regular release in Volks's A3 line. In a way it is rather fitting that one of the final Tactical Surfaces Fighters seen in Total Eclipse would also close out the toy line it was created to promote. 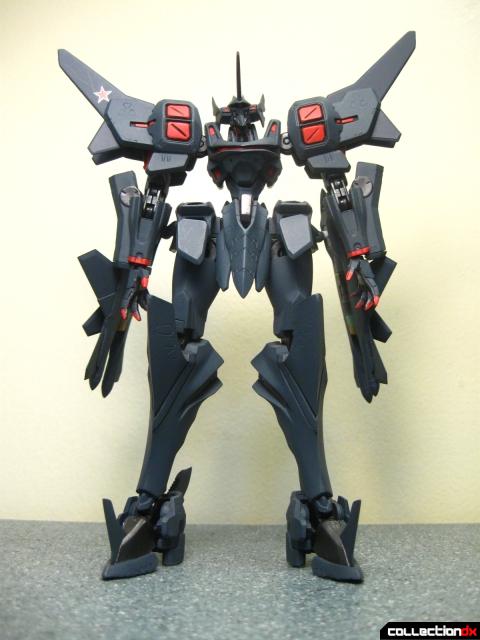 Just like in the series, the Su-47E is derived from the earlier Su-27 and Su-37 figures with many parts being completely redesigned to reflect its purpose as a high performance Tactical Surface Fighter. The Berkut is quite sizable for an A3 figure, as its distinctive shoulder fins make it just shy of seven and a half inches tall. 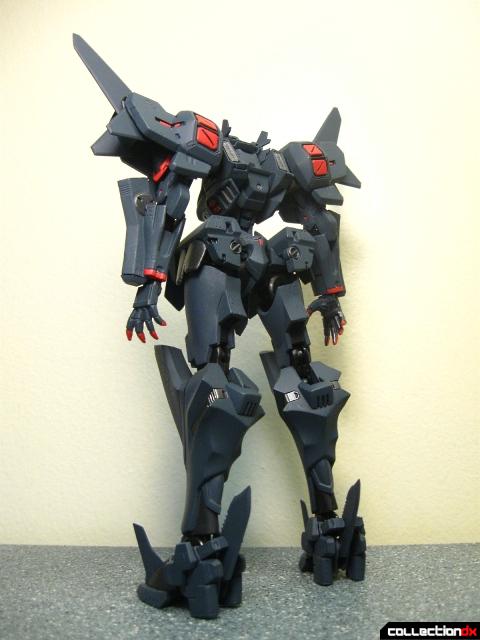 Like all of the A3 figures, the Berkut comes out of the package without its jump units attached. 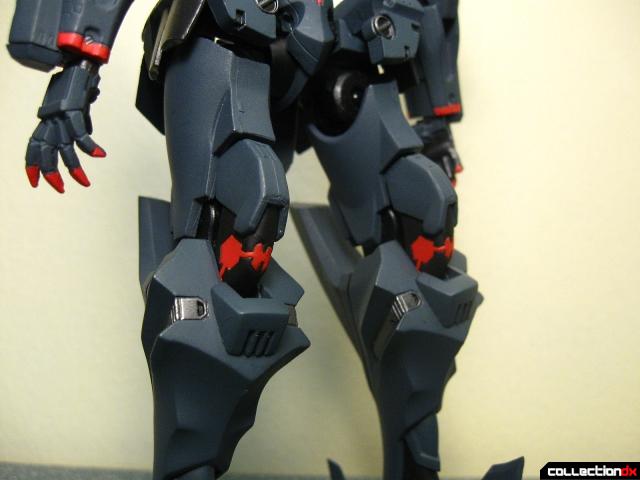 And again the knees feature small plug-in parts that replicate the actual look of the joint but impede motion. These parts are actually quite beefy on the Berkut and require the knees to be clicked a unnaturally forward a little before they can be removed. 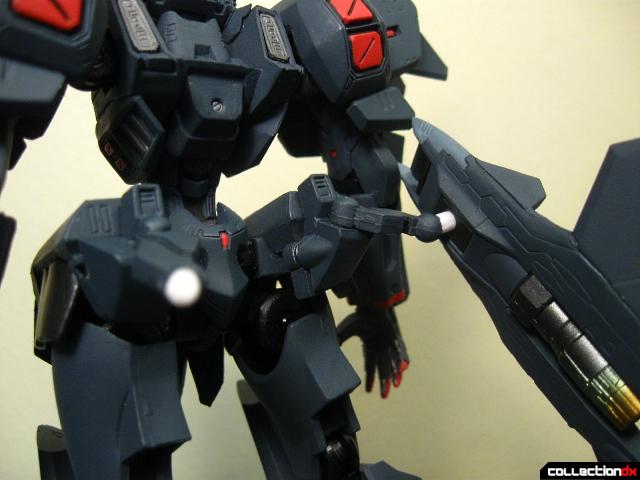 The mounts for the jump units are fairly straightforward. Each one tabs into the Berkut's movable skirt armor and connects to the jump unit itself via a small swivel joint. The jump unit can be moved in or out at the main mounting point or rotated where the movable strut plugs in. Note that the ends of the pegs on these joints are left unpainted to prevent any paint gluing or scraping. 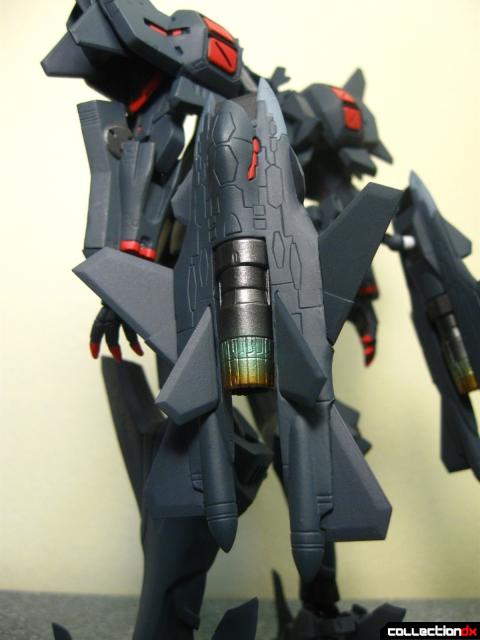 The jump units themselves are suitably airplane-like with their forward swept wings and extra canards reflecting the design of the Berkut's real life namesake. The burnt metal effect on the engine nozzles is a welcome standard with all A3 figures. 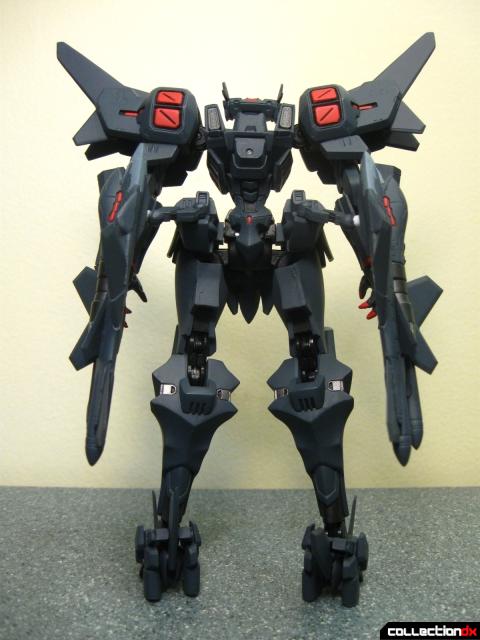 When fully equipped, the Berkut has a pretty wide girth. While I find the figure is a little back heavy when the jump units are attached, it is also fairly easy to balance. 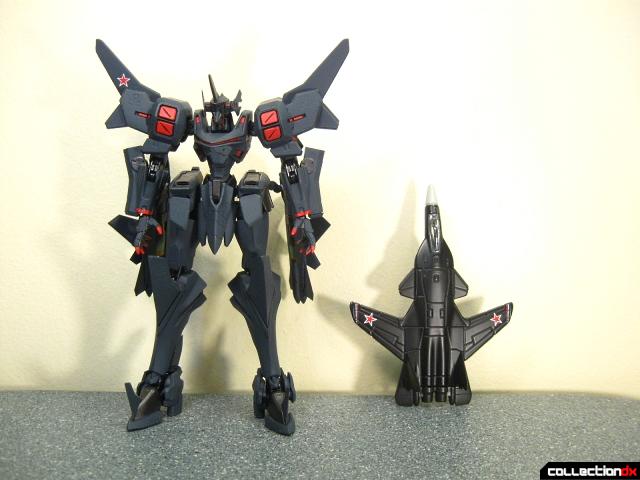 Much of the Muv-Luv machine's look and back story is modeled after the real life Su-47 Berkut. The real Berkut's very aggressive looking forward swept wings are a repeated design element all over the equivalent TSF. From the large shoulder wings to the enlarged knee pads and down to the extra fins on the feet, the robotic Berkut seeks to invoke the feel of the original airplane. 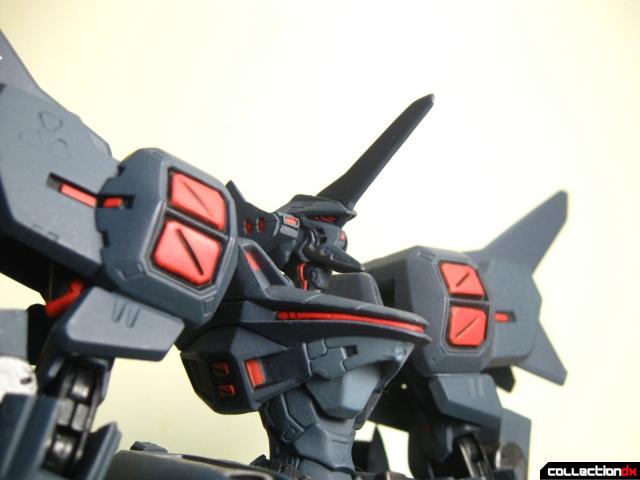 Even the prominent horn jutting from the forehead is like a singular forward swept wing. The whole upper body of the Berkut is equally menacing and regal as it seeks to assert dominance over lesser robots and their puny shoulder pads. 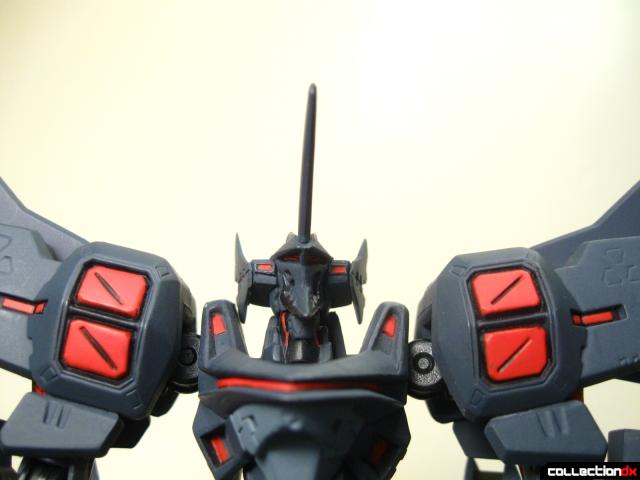 The large red areas are styled after the engine intake covers of a real Russian fighter jet. 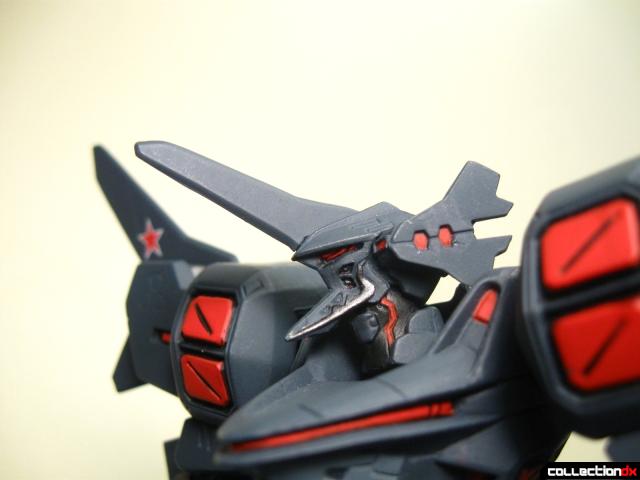 Berkut's head design is beautifully realized on the A3 figure with crisply molded details and great paint work. Its narrow red eyes are even properly depicted as being multi-segmented. Also note that the "ears" extend above and below the sides of the face as a nod to the real life Sukhoi fighter design quirk of having large vertical tail fins and matching ventral fins. The head itself has a decent range of motion as it moves around on a ball-joint at the base of the neck. Just be sure to watch out for the horn as you're moving everything around. 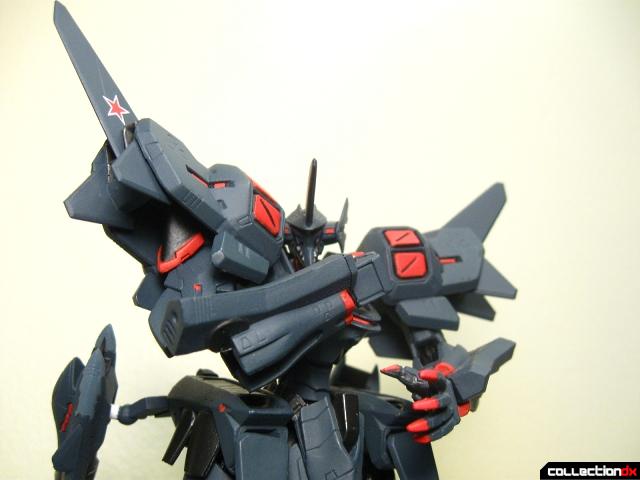 The arms feature a good range of motion with each elbow possessing a double A-Lock joint that clicks audibly as the forearm bends upward. Shoulder articulation is accomplished with a single A-Lock joint that is set a slight angle so it moves a little differently than one would expect. The shoulder pauldrons are attached to the top of each arm via a ball-joint so they can wiggle around if needed. The wrists are simple swivel joints as the extra hands simple peg into the forearm. 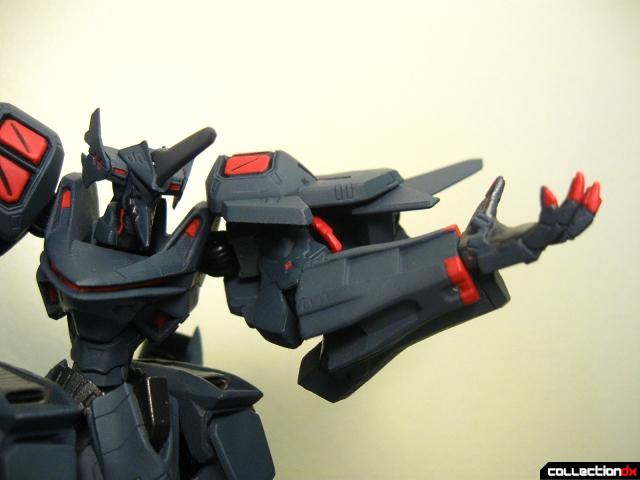 The bicep swivel in each arm is functional but is accomplished in a somewhat off manner. The red and black area on each arm is actually separate from the upper arm and moves around on its own ball-joint. On any other A3 figure that black area on the arm is simply molded onto the bicep. On here it acts like a weird extra bit or armor that has be moved out of the way during posing. The Berkut also features both and an upper chest joint and a lower waist joint, both of which are accomplished with a simple ball and socket setup. 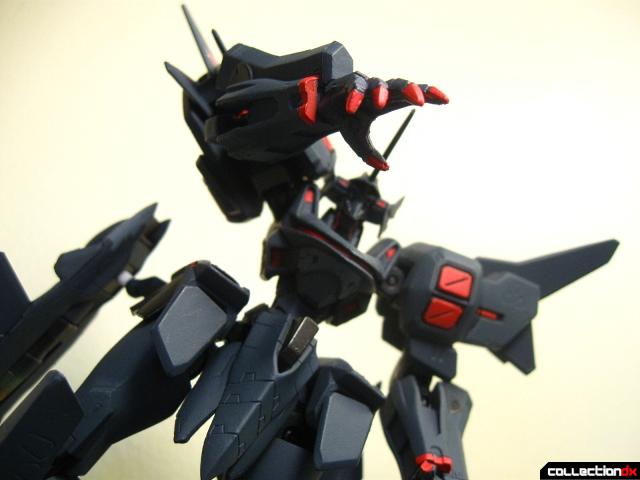 Overall the arms are flexible enough to let the Berkut do what you want it too. Even if you simply wish to have it terrify others with its eye catching claw tipped fingers. 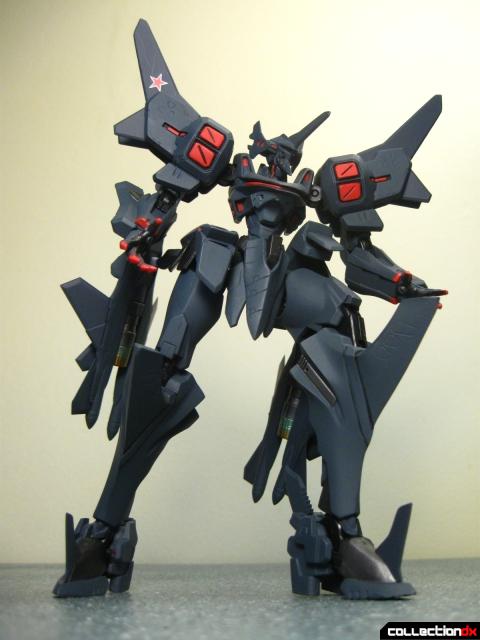 The leg articulation on the Berkut is another case of everything being fully functional but somewhat hampered by the sculpt. This TSF's deliciously sculpted thighs can get hung up on either the codpiece or moving skirt armor. It's actually better to unpeg the skirt armor from the waist, pose the leg, and then fit the skirts back on. The knees can achieve a ninety degree bend and the ankles possess a good ankle tilt that gives the Berkut a firm stance in wide legged poses. The forward and back motion on the feet is accomplished with a ratcheted A-Lock joint for added stability. 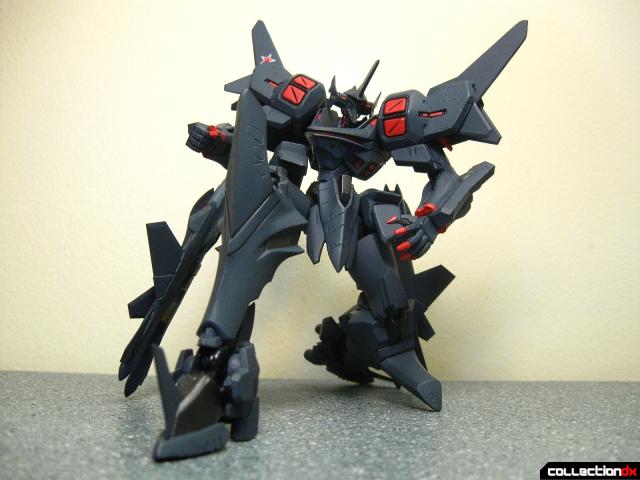 With a little effort the Berkut can handily pass the kneeling test although some care needs to be taken to keep the feet fins off the ground. 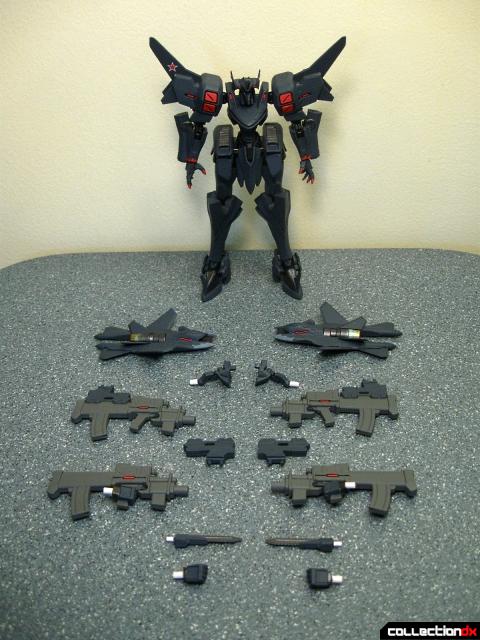 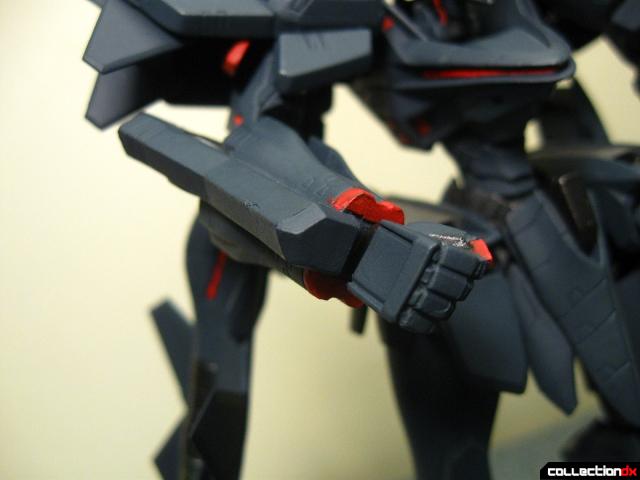 In the Muv-Luv universe, most modern Soviet TSF's use chainsaws (or Blade Motors as they call them) for close combat. The Berkut employs the typical setup of having some whirling death up its sleeve. 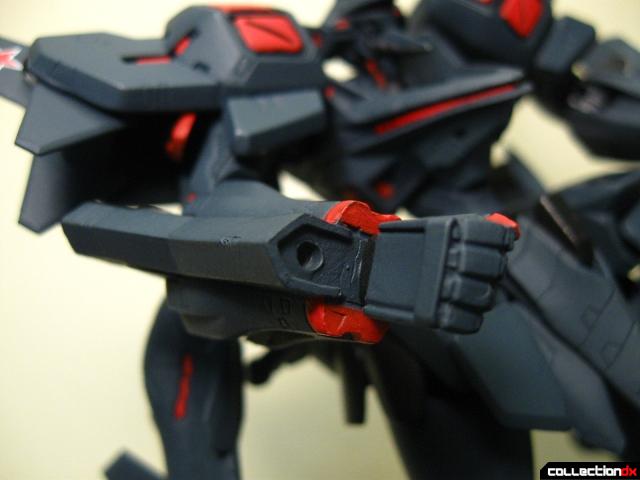 Simply pop off the pentagon shaped cover off of the front of the forearm blocks... 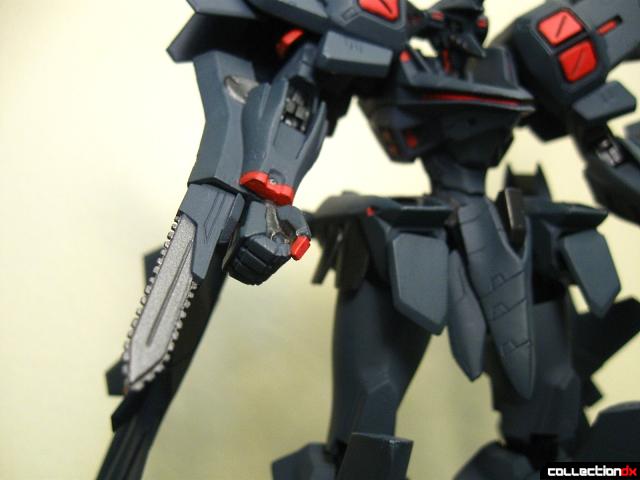 And plug in the deployed chainsaw. I appreciate how these pieces have a molded on replicate of the door and a hand guard so the TSF's doesn't slice off its own fingers in the heat of battle. 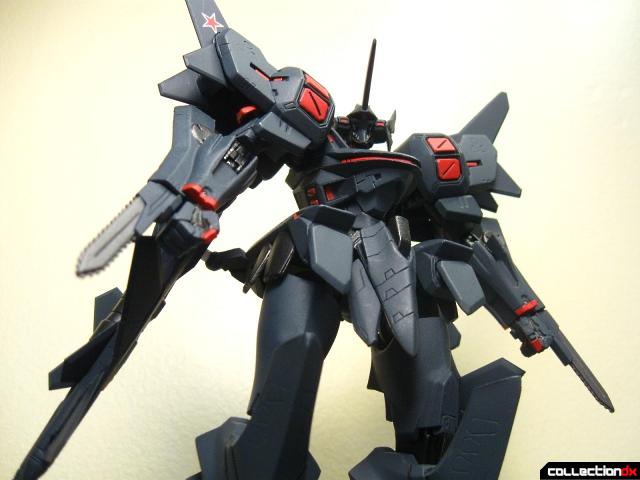 As the Soviet Union was one of the first countries to be complete overrun by the BETA, its army's preferred melee weapon is just as vengeful as it is gleefully sadistic. 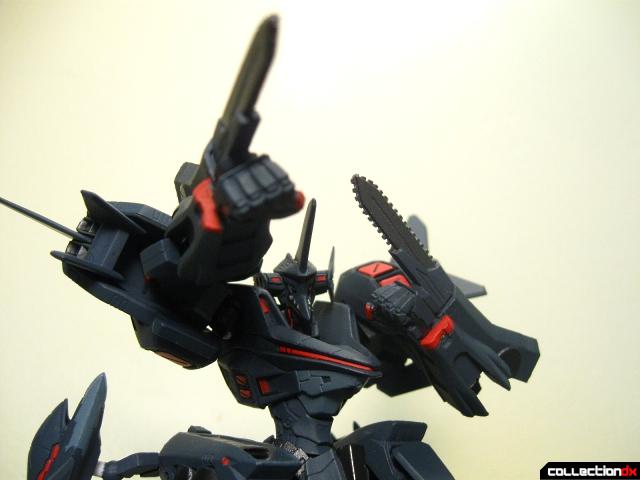 Even in the Total Exclipse anime, Soviet TSF's could be seen sinking their chainsaws deep into the bodies of their enemies. 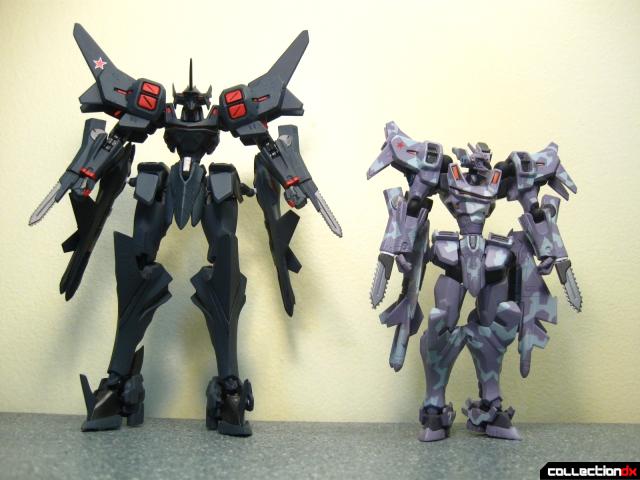 When placed next to the Revoltech of the Berkut's predecessor, the Su-37UB Terminator, one can see how there's a progression from one design to the next. The A3 line does have a few Su-37 variants but I have yet to see them on the aftermarket at a reasonable price. 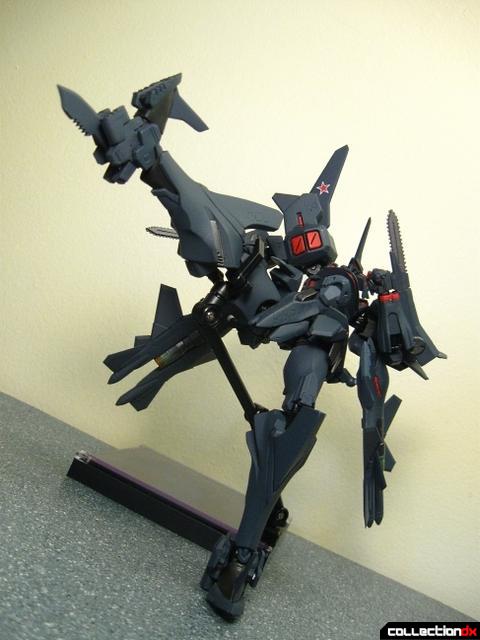 The Berkut even features extra close combat weapons in the form of flip out knives in its heels. These easily win the "most difficult gimmick to demonstrate" as it's kinda hard to get this figure to balance on one leg. Still the Berkut joins a certain cyborg with a nasally voice in the elite group of things that can both kick and slice their opponents at the same time. The flip out knives even work as a handy set of heel struts for extra stability. 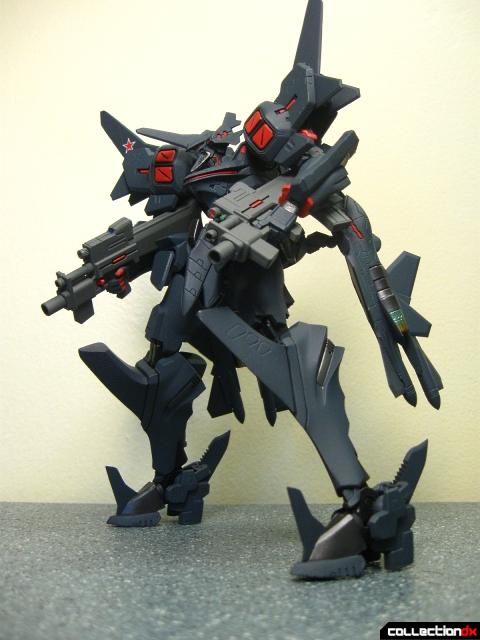 For long range weapons the Berkut comes with a pair of chunky looking A-97 Assault Cannons. 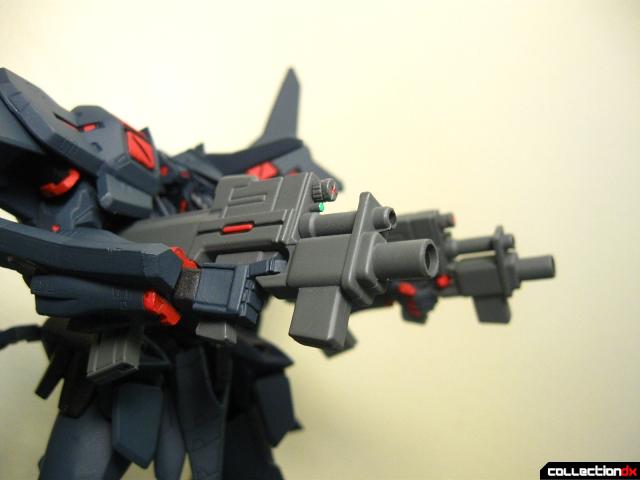 Like all A3 figures, the guns come with hands molded onto the handles. I appreciate that the red fingertips are still present on the hands. 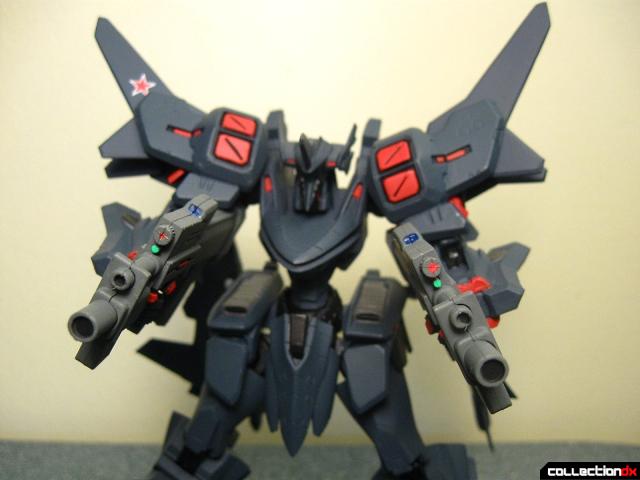 The guns themselves even have all the little sensors and laser sights picked out with paint apps. 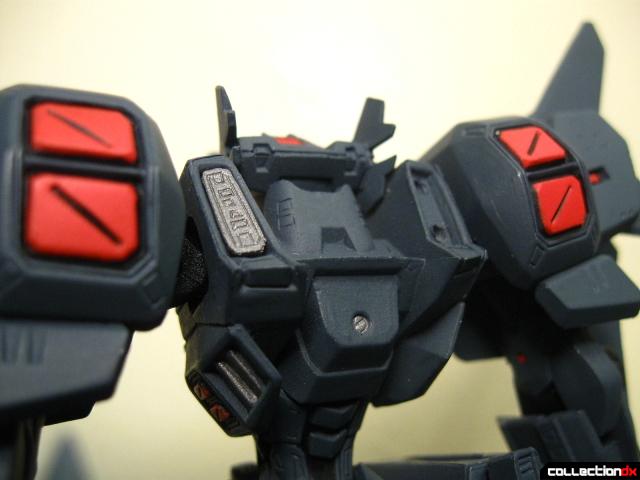 For the mount pylons, the Berkut comes with a pair of cover panels already installed. To remove this just use a long fingernail or a toothpick. 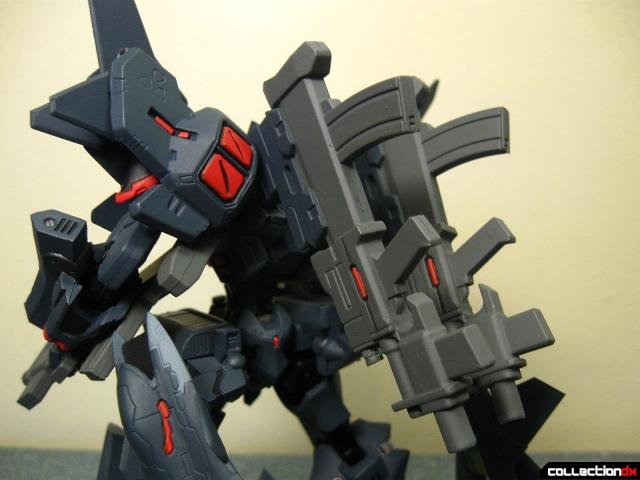 As I mentioned before you get both bare and gun bearing mount pylons. Unfortunately the double peg connector for each mount pylon fits somewhat poorly straight out of the box. They're also in danger of being knocked off by the Berkut's massive shoulder pads. It's a little annoying but not a deal breaker by any stretch. 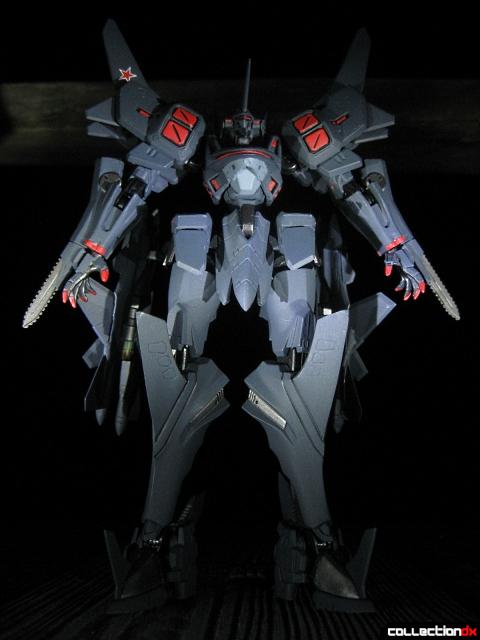 The Su-47E Berkut serves its purpose as both a impressive end boss ind the Total Eclipse anime and as stunning swan song for the Volks's A3 line. While it's not the most playable of the A3 figures, the Berkut exudes such a commanding and ominous presence that it's a real standout piece in any Muv-Luv collection. Unfortunately due to its relative newness, the Berkut is still being sold for around its 7,800 yen MSRP even at most aftermarket retailers. Paying full price does hammer home these are not mass market toys, but more high end collectibles aimed squarely at fans. Those interested in the design in a smaller and more competitively priced package may want to check out Kotobukiya's upcoming model kit of the Berkut. For myself, the A3 figure of the Berkut is a beautiful if temperamental addition to my collection.