I purchased my Machine Tornader from HobbyLink Japan. Get yours there!

There were two reasons I ended up buying SIC Kiwami Tamashii Kamen Rider Agito. The first reason was that everyone I knew was telling me that he was a fantastic super poseable awesome action figure. The second reason was because Bandai soon announced that they were going to also make Agito's bike in the SIC style as well. I couldn't help but get a little excited and ended up getting the pair. After all, what's a Kamen Rider without a Ride?

The Machine Tornader is Kamen Rider Agito's signature bike and it is absolutely gorgeous to look at. Bandai used a very glossy metallic red that makes this bike shine. The extra clear pieces along the rest of the bike are also a nice touch. The clear blue eyes at the front almost glow under proper lighting. 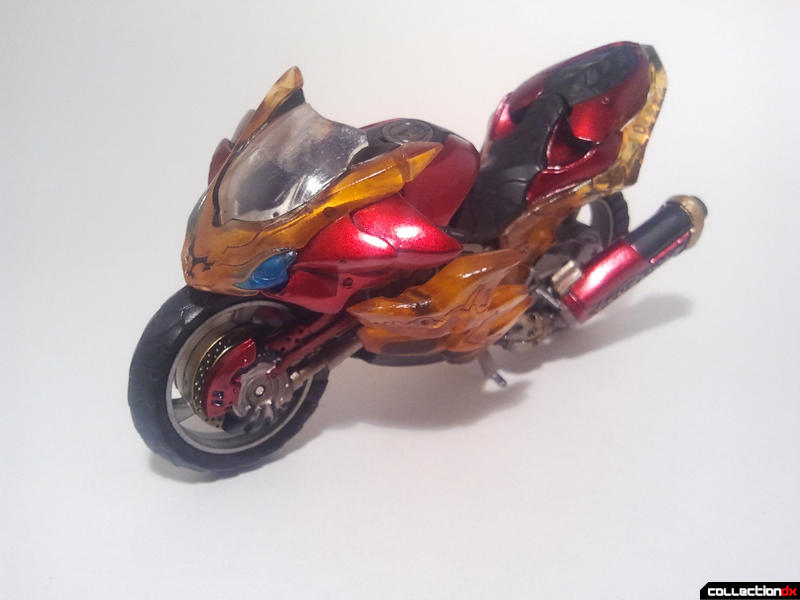 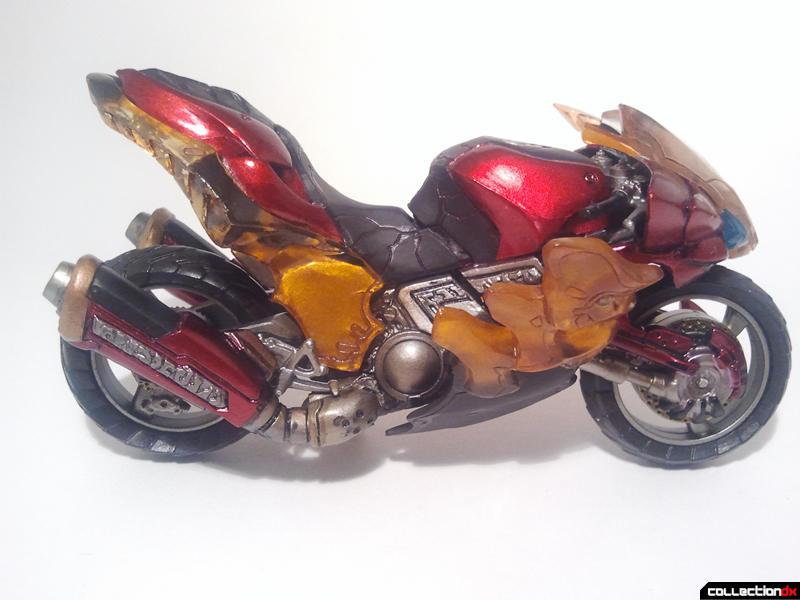 There's a load of sculpted detail all over this bike, and fantastic paint applications as well. I particularly like the scales that are running up the black leather seat of the Machine Tornader. 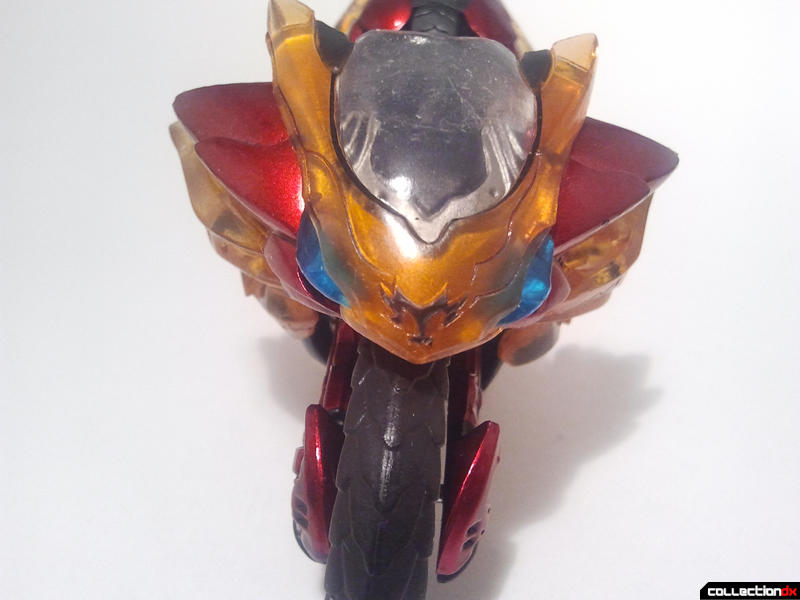 It even has a tiny kick stand! 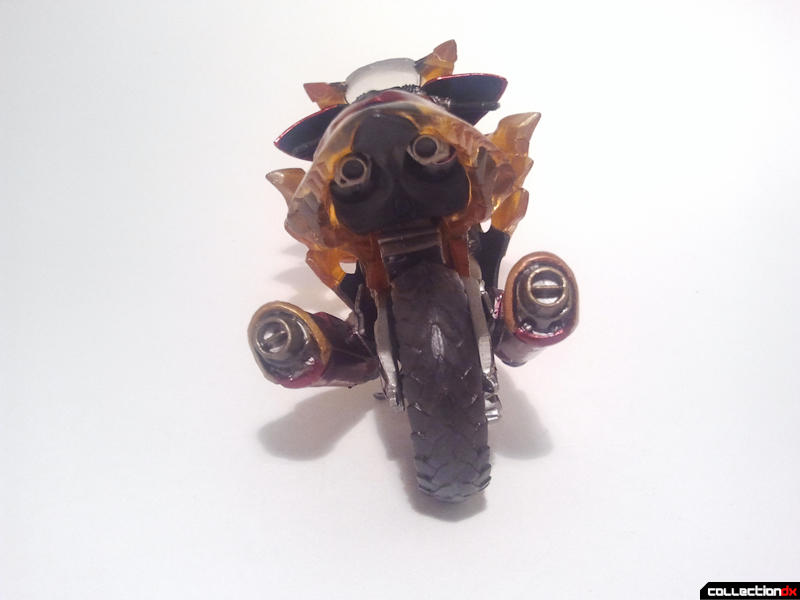 The bike has a surprising bit of heft to it even though it seems to be entirely plastic. The tires are also hard rubber so this bike has no trouble rolling very well. Note that the front wheel does not turn, although there is a very good reason for that.

As the Machine Tornader is Kamen Rider Agito's bike, it looks best with Agito next to it. These two really are a fantastic pair together. 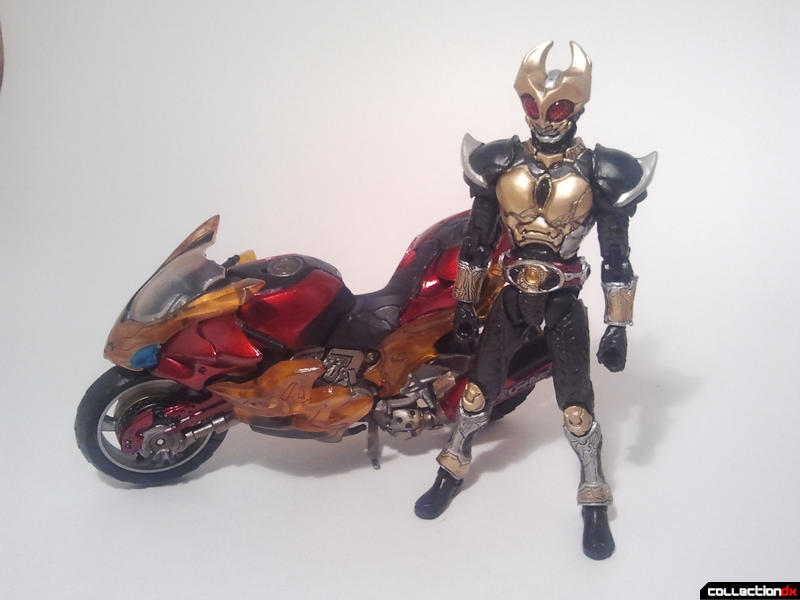 Getting Agito onto the bike is very easy. Just swap out this hands for his open hands and slip the grips right in. The fit is very simple and very satisfying. The bike may look a little bit small on him, but I don't think it looks too bad myself. 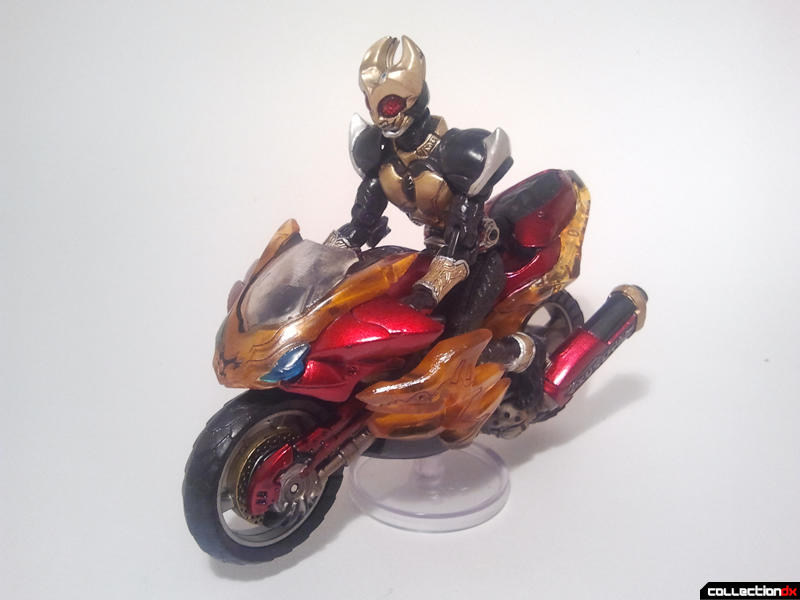 The Machine Tornader also comes with a clear stand so the bike can be displayed standing upright without the kick stand. 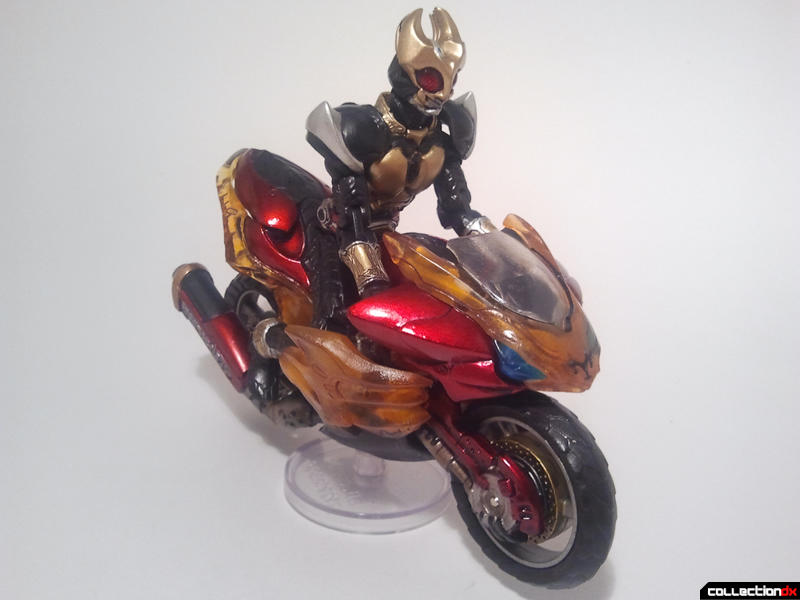 Since the SIC Kiwami Tamashii line is essentially a 4” scale line, many 3 3/4” action figures like GI Joes can ride this awesome machine without any trouble at all. 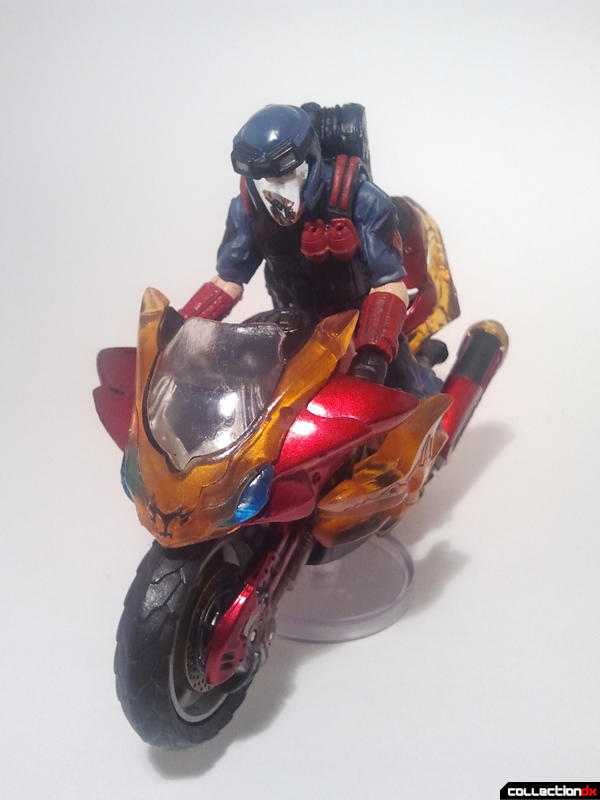 However, the Machine Tornader does more than just be an awesome motorcycle. The Machine Tornader has an alternate mode known as the Slider Mode, where the bike turns into a ridiculous hover board for Kamen Rider Agito to rider kick his enemies off of. And this version of the Machine Tornader has no trouble mimicking this gimmick. Simply turn both of the wheel axles, unfurl the dragon crest surrounding the front, and move the back of the bike on a crazy double hinged assembly. The end result is a very cool and very stylized version of the original Slider Mode. 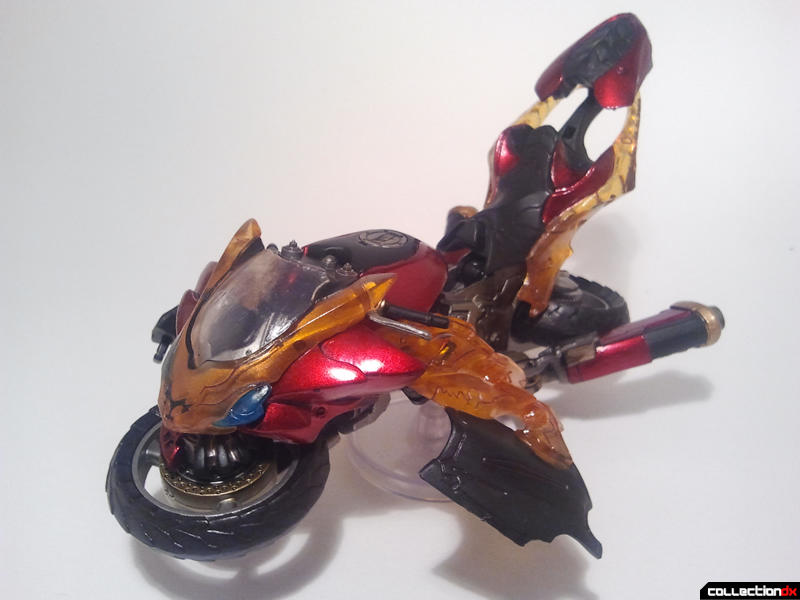 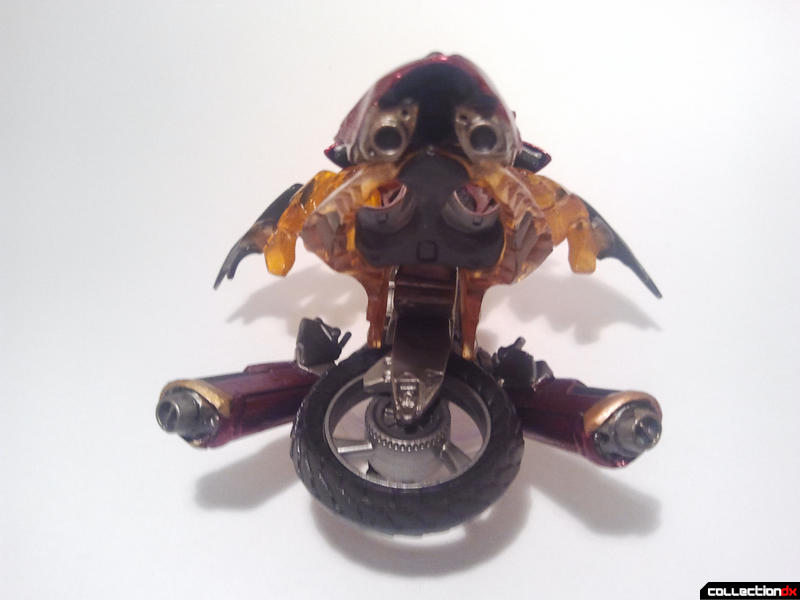 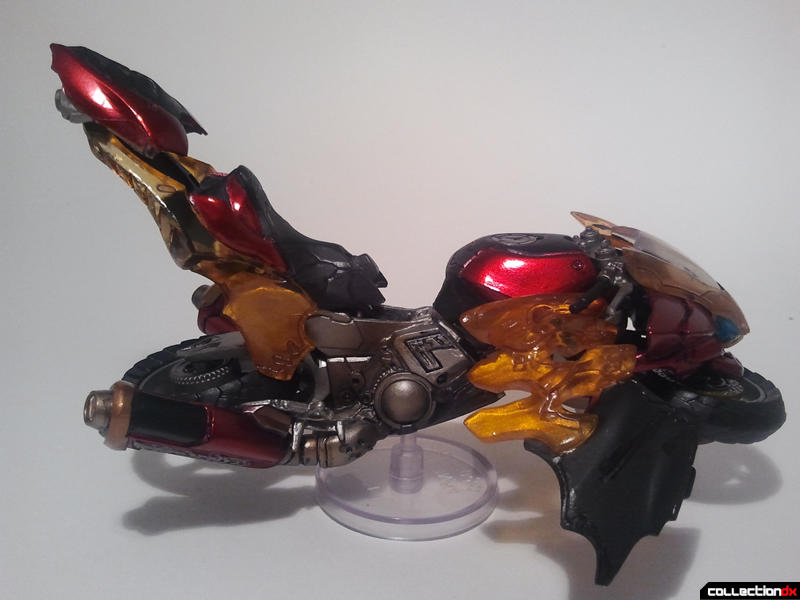 This mode of the Machine Tornader really needs the stand in order to look like it's hovering. The peg hole unfortunately is not the same diameter as Bandai's Tamashii Stages, it's a little to large in diameter. Thankfully the bike can still fit onto the stand by dangling on the peg without too much trouble or effort.

In order for Kamen Rider Agito to do his kick, he would ride the Machine Tornader in this mode before jumping off and kicking his enemies so hard that they explode. Of course actually balancing a figure on this would be a bit difficult, so Bandai has included a foot peg for this purpose. Simply pull out the gas cap and replace it with this black foot peg. Agito's foot fits in very easily and the end result is quite satisfying. 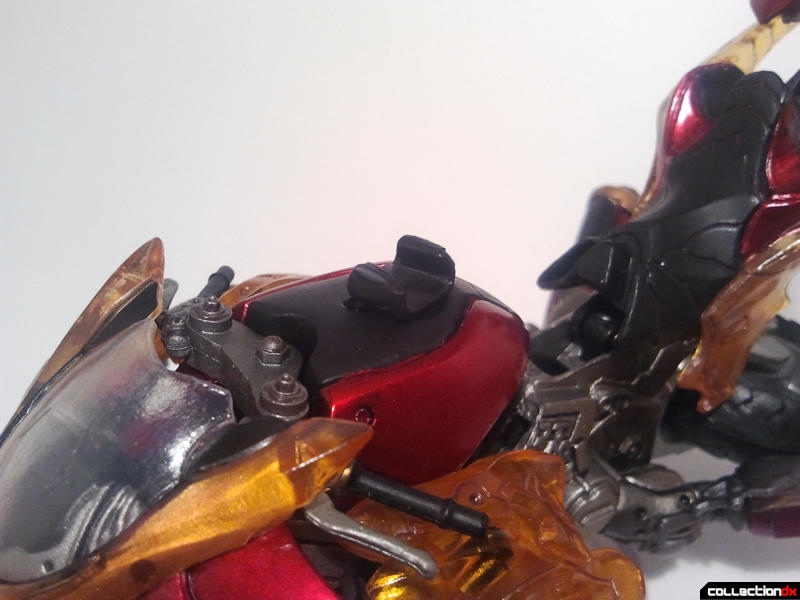 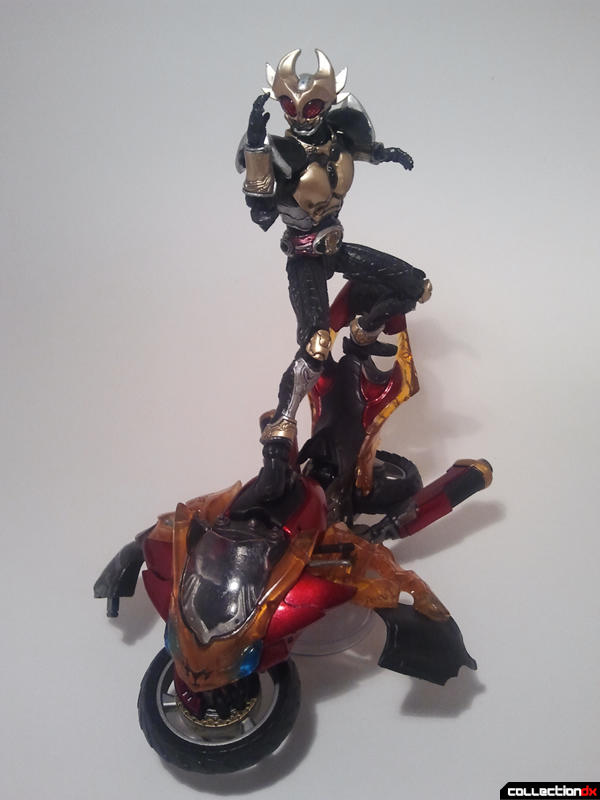 With the help of a few stands, it isn't to hard to pull off Agito's Rider Kick off of the Machine Tornader either. 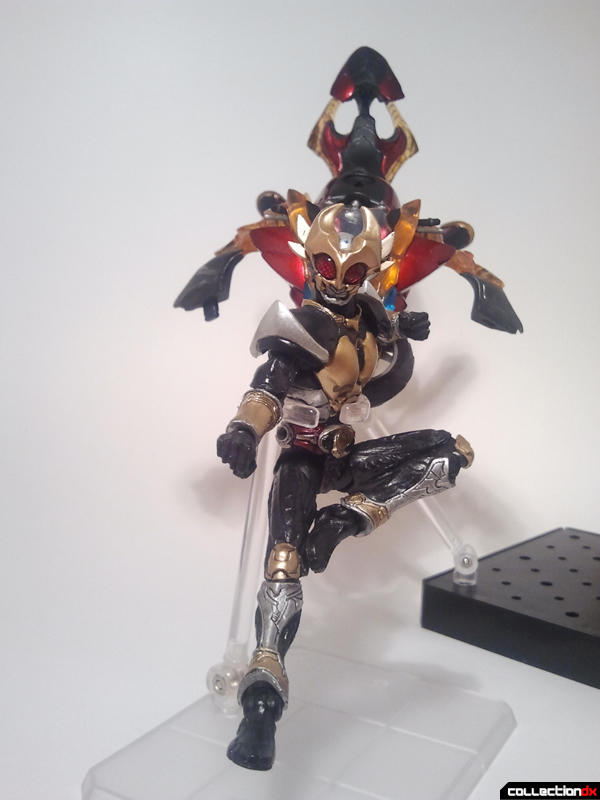 The Machine Tornader is a fantastic vehicle accessory for Kamen Rider Agito. These two make a fantastic pair that's as good as peanut butter and jelly. If you have an SIC Kiwami Tamashii Kamen Rider Agito, you need to have the Machine Tornader. Even if you don't have any other toys from this line and just collect GI Joes or what not, this bike will still make an awesome vehicle for them. This has become one of my favorite toys from this year for sure and is absolutely worth it. 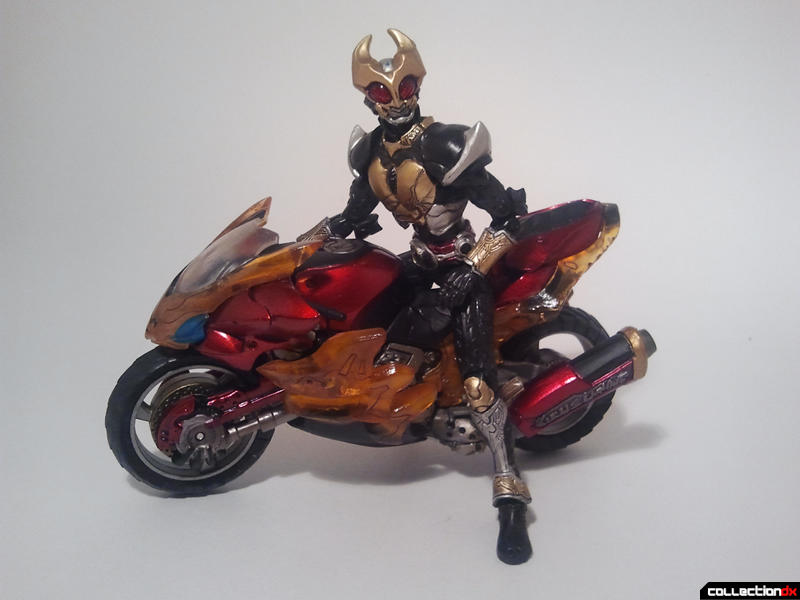 I purchased my Machine Tornader from HobbyLink Japan. Get yours there!

9 comments posted
This is indeed an excellent

This is indeed an excellent toy. I got mine from pre-order and am very happy with it. The metallic red paint and clear yellow parts, along with the S.I.C. treatment, really make this toy awesome. For those who have Agito, it's a must-have.

I confess that, at first, I was a little disappointed with the fact that the exhaust pipes can't get aligned, but then I just turned the right exhaust (seen from behind) a little to the right and problem solved. Also, although cool, the hover mode is nothing show-accurate, but I think this is nothing compared to how beautiful the bike mode is.

By the way, are you sure there isn't anything in your front wheel that makes it not capable of turning? On mine, it turns without a problem...

Ah, I should explain what I meant by the front wheel not turning. I meant that the axles for the handlebars weren't aligned with the wheel, so you can turn it by turning the handlebars. As you can see in the pictures, it turns just fine for Slider Mode. So yeah, my bad on failing to explain that very well.

I didn't know these guys were Joe sized! AWESOME! Crap, now I'm gona have to look into these...

Yeah, I thought I had mentioned it in my previous Kiwami Tamashii reviews, but I guess I never actually showed any pictures for size comparison! Here's a picture of Kamen Rider Garren next to an Iron man 2 toy.

They're a little bit on the tall side, but I just equate that to them being dudes in big armored suits.

OH CRAP, it's on now. I'm gona have to get a few of these. Thanks for the comparison!

I like the mech-organic that the SIC line brings to Machine Tornador. Though I am not a fan of all the SIC designs , this one is pretty sweet!

mech-organic look , I should have said

Nice review, thanks for including the Joe figure for comparison. With the shape of the bike, it almost looks like it could work for slightly smaller figures as well. How does it compare to other 1/18 motorcycles?

Glad to hear the size comparison was useful. Compared to 1/18 motorcycles, the Machine Tornader is a bit bulkier. However, I don't think that's a bad thing because I've always thought that 1/18 bikes tended to be a bit too small.