Sunrise’s Code Geass: Lelouch of the Rebellion, has proven itself a durable and successful mecha property in an era of forgettable robot anime.

In broad strokes, the series follows its protagonist, exiled British Prince Lelouch as he rallies a resistance to the oppressive colonial regime in an alternate universe where Britain has occupied Japan. Lelouch possesses certain supernatural powers which ramp up the complexity of an otherwise typical mecha-oriented narrative. I’ve only watched the first season, but it’s awesome. Lots of great robot action with a smart, sophisticated plot and rich characters.

The Shinkiro is Lelouch’s personal Knightmare Frame (the generic term used for the series mech). It is uniquely, fittingly badass.

This is my first of the Composite Version toys, which are cousins to the Robot Spirits line, though I’m unsure as to the distinction. The Composite toys would seem to be a little more substantial than the Robot Spirits pieces, closer in detailing and heft to the FIX Figuration line (also designed by Hajime Katoki, although a small part of me thinks Bandai just slaps ‘Ver.Ka” on half of their product automatically), though with more refined materials.

The Shinkiro arrives in a beautiful, busy window box which again evokes both the Robot Spirits and FIX Figuration packaging. The screened text on the window is a nice touch. 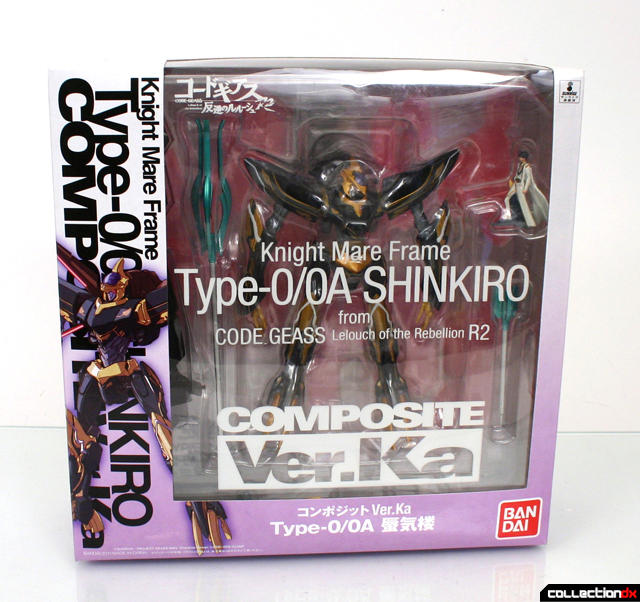 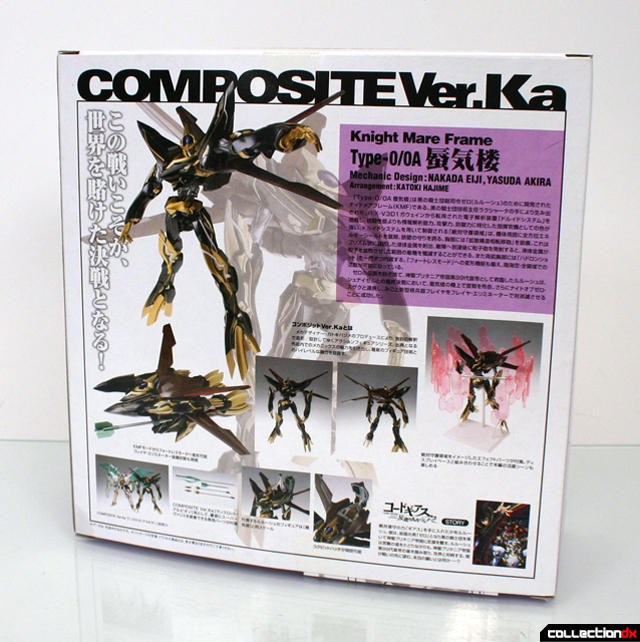 Inside, two trays of parts, half of which are devoted to the Shinkiro’s Absolute Defense System (more on this later). 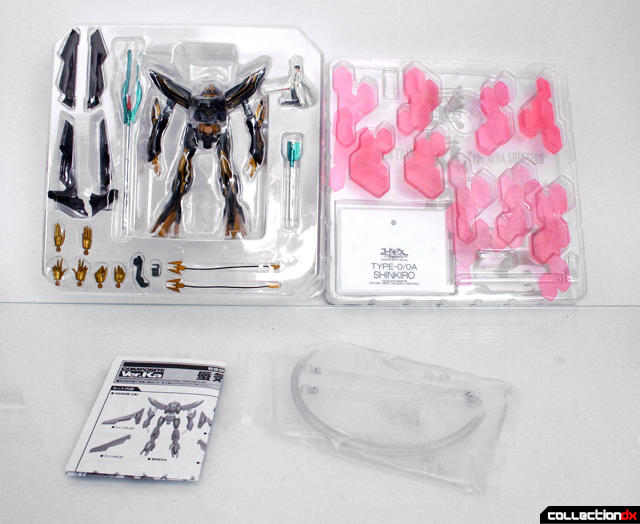 With some minor assembly, Shinkiro’s good to go. The materials are top notch. While most of the figure is PVC, the material is sharp, solid, and impeccably painted. The paint apps here are terrific. The metallic gold paint really pops from the glossy black. Sculpting is tight.

First off, I’m a little perturbed by the figure’s apparent difficulties with STANDING. Oh boy, I’m starting to get paranoid. Are modern toys incapable of this? Deep breath, Enthusiast. It’s probably because it’s on glass. Fine. I can’t expect every toy to stand on a slick surface. Let’s take away the glass. 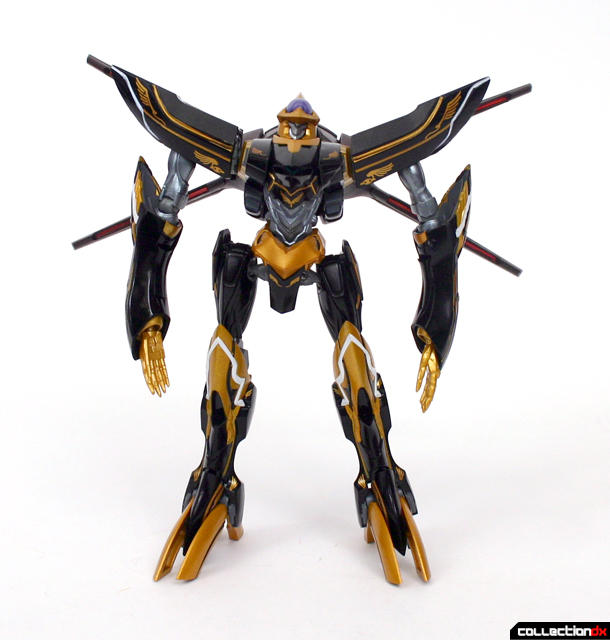 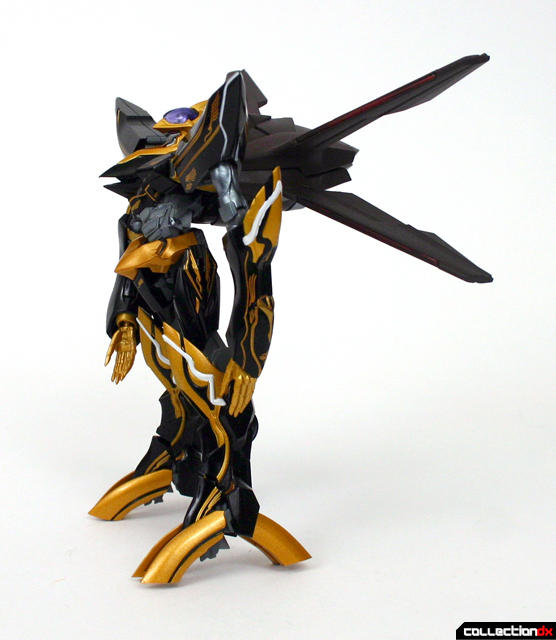 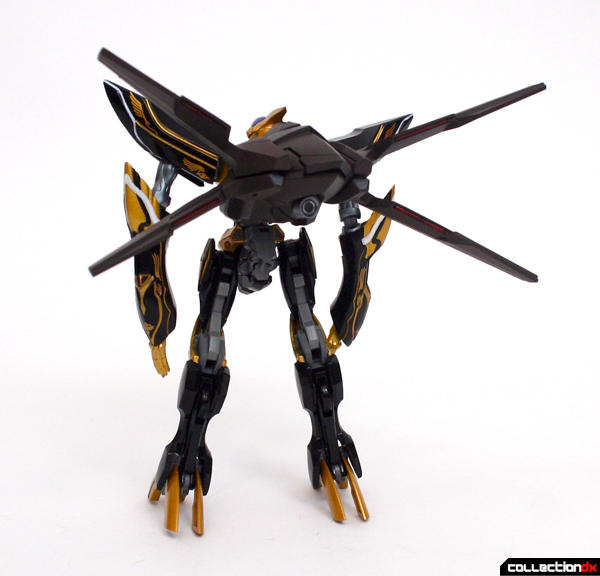 This doesn’t make as much of a difference as you’d think. This thing is engineered to stand in one specific pose. Any spread of its legs beyond say thirty degrees and he’s doing full splits, even on paper.

By way of demonstration, here’s my attempt to get him to stand up while showing off some knee-hook accessories. Okay, lets start with some kind of dynamic crouching pose. Nope. Those cool looking feet just do not work unless they are perfectly upright. But let’s try to see if there’s any more movement we can get out of those feet. Nope. They pop off. 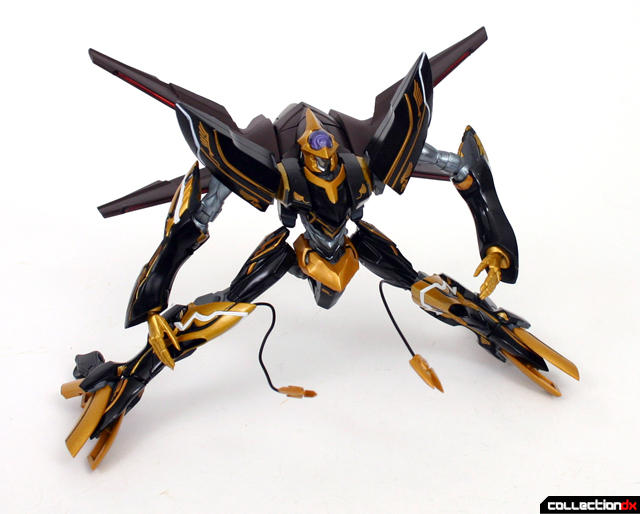 Back to the generic stance, the only position the damned thing will hold. Posing without a stand is just too frustrating to continue attempting. Fine. I give up. The stand it is. Better, but barely. Posing is still awkward. I like the Scopedog-like skates which fold out from his legs. The opening cockpit is nice, but why couldn’t we get a sitting pilot Lelouch instead of, or in addition to the standing Elvis? The Shinkiro can transform into a flight/submarine mode. The transformation is similar to one of those half-assed Gundam “transformations,” where the suit kind of folds in half and ends up looking like a folded-in-half robot with wings. Still, the Shinkiro looks fine in this mode. A substantial amount of parts and accessories are dedicated to Lelouch’s Absolute Defense mode. An elaborate set of panels and fittings are included to recreate this effect. I found it underwhelming, but it’s a nice display piece. I’m beginning to think that I’m just never going to “get” these fiddly little figures. Objectively they are just fine, and well done, but they are missing something. I only see an obsessive recreation of a character without any consideration of fun or play. It’s all very pretty and soulless. Like Lindsay Lohan.

7 comments posted
Gotta be this guy for a moment...

"AT Field to full power!"

AT field indeed. If I remember correctly, not a single Knightmare got through it's shield once. Overall a good review, I have to say I'm not particularly bothered by this thing not being able spread it's legs, since it was pretty much never shown on the ground activated. Despite that, I still feel this guy is about $10-$20 more expensive then it should be. Might buy it on sale.

That Lelouch standing figure is meant to replicate a scene where Lelouch gave speech to his troop before final battle. You forgot to mention that Lelouch figure has a fabulous pink sword lol.

Ver. Ka is basically Katoki's markings on an existing character. I think that's the only thing distinguishing this from an average Robot Spirits release. You see the same thing on FIX, Metal Composite, etc...

You are right in stating that it has katokis markings but its not cousin to RD....... Composite is a spin off from the GFF lines done by katoki's which were were pretty much glorified statues ( they had articulation but werent meant for doing any real posing just to stand straight and look pretty) and deals with mecha that arent gundam lol. Katoki took the composite a bit further going beyond just decals and making them a bit more flamboyant (look at the Gurren lagan and Lancelot composites).

A bit of history on GFF, They were pretty fragile though and many parts fell off easily. Years later they revamped the line into GFFN where they did away with the pvc and almost used entirely ABS for the figures (which confused me when you said this figure is almost entirely of PVC when it is in fact primarily ABS). Furthermore The GFF line is more true to 1/144 scale so they are bigger than RDs........ The last few releases, however, the figures are gaining more articulation akin to the RD line. I assume because people want more than just pretty statues.

A lot of people are upset with this line because they cost twice as much as RD but loose the playability and durability factor found in that line....... but people need to know they are two seperate lines for two different type of collectors.

Thanks for the background. Given that the composites are an evolution of GFF, I can understand the limited playability of the figure. It certainly is a handsome statue that can technically move. The RD toys I have are definitely more posing-oriented and fun.

I forgot to mention that the GFFN line incorporated some diecast into the internals....... Though their last creation ( FA Unicorn ) I dont think had any as with the composites. Next in line is Cybaster from SRW...... and it wont even have any of the funky decals or markings as previous entries, which many fans are happy about.