Kamen Rider OOO TaJaDol form is another form from this year's Kamen Rider show of the same name, and another form to be given the S.H. Figuarts treatment. TaJaDol, or TaJaDor as it may be known in other less engrishy translations is the mid-series upgrade for Kamen Rider OOO, where all three red core medals are used at once. This gives OOO the power of the Hawk, Peacock, and Condor, along with this very gorgeous metallic red paint.

This is the first experience I had with the OOO Figuart body, and I was a little bit worried at first. When TaToBa, the first form of OOO came out there were reports of lots of problems: loose joints, sloppy paint, things of the sort. Thankfully, none of that seems to be present with this latest iteration of the character. The paint work seems solid with little to no paint mishaps, and all of the joints are nice and smooth. 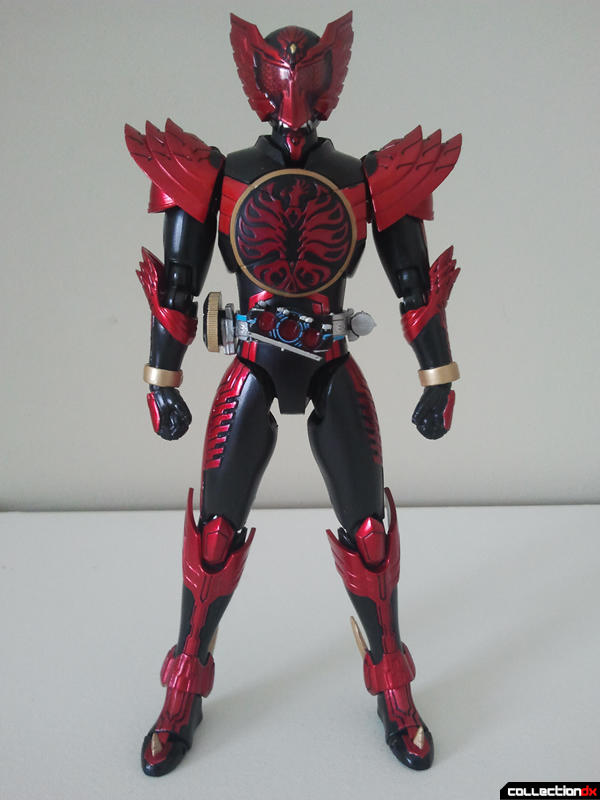 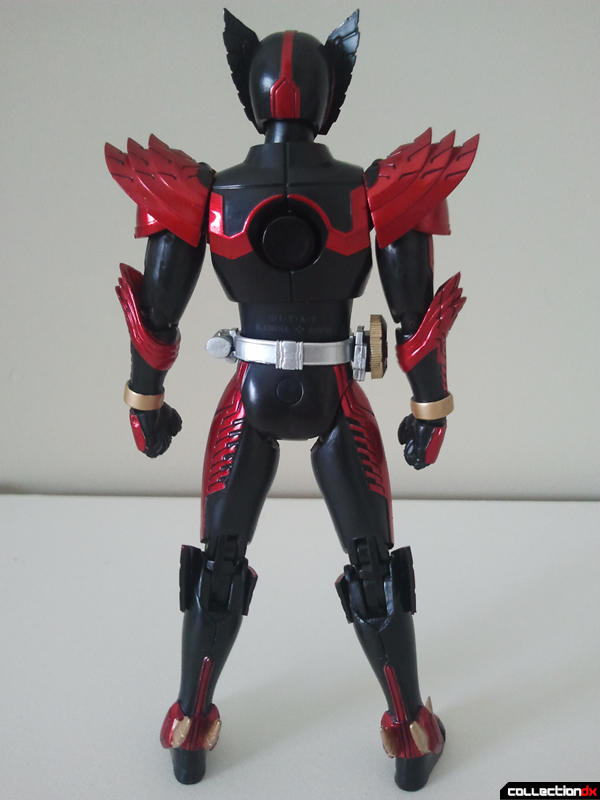 The feet are unfortunately like Kiva Emperor and Dark Kiva's feet where they are just plastic feet on ball joints. It's more limited than the Figuarts original metal feet, but also thankfully much tighter than the Kiva Figuarts feet.

The paint and details are all well done. The OOO design is rather simple, being primarily black with various primary colors lining the suit with the different forms, and so there aren't many areas to really mess up the paint on to begin with. As always, the belts are done very well and look really nice for being so tiny. 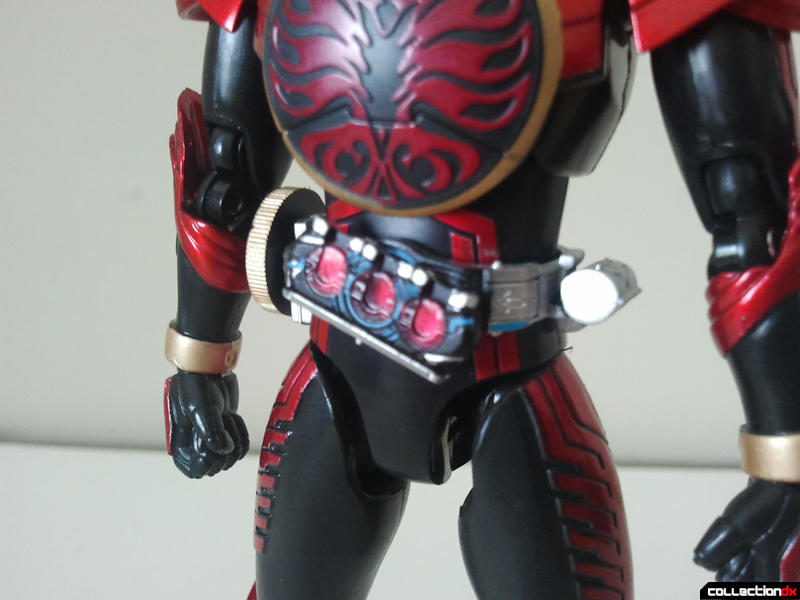 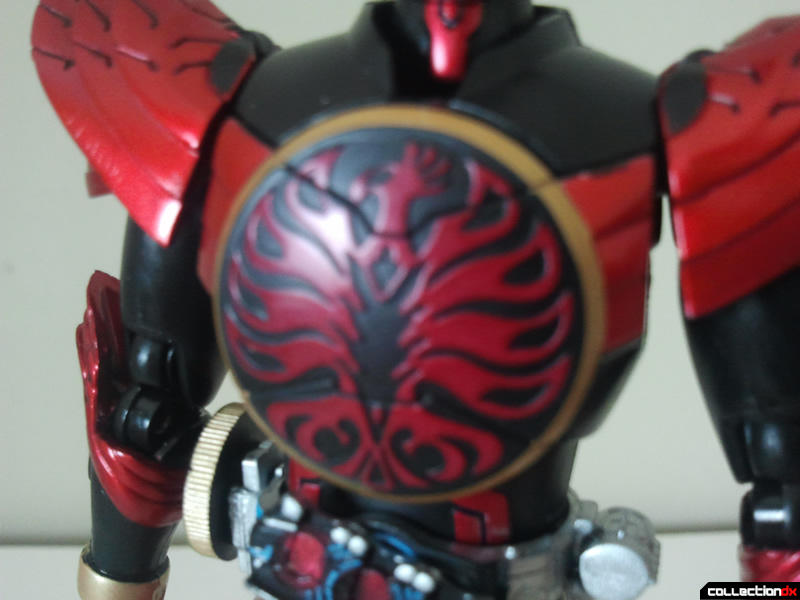 The headsculpt of TaJaDol is excellent, and incredibly avian. The face is actually behind a red piece of clear plastic, something I did not even realize this design had until getting a hold of this toy. 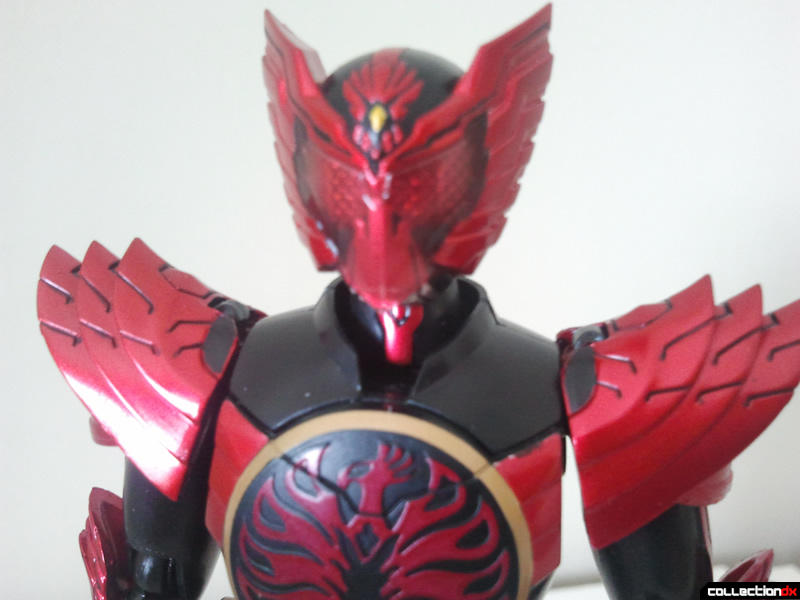 Articulation is great as always, with plenty of ball joints and double-joints to get this figure to do just about whatever you want. 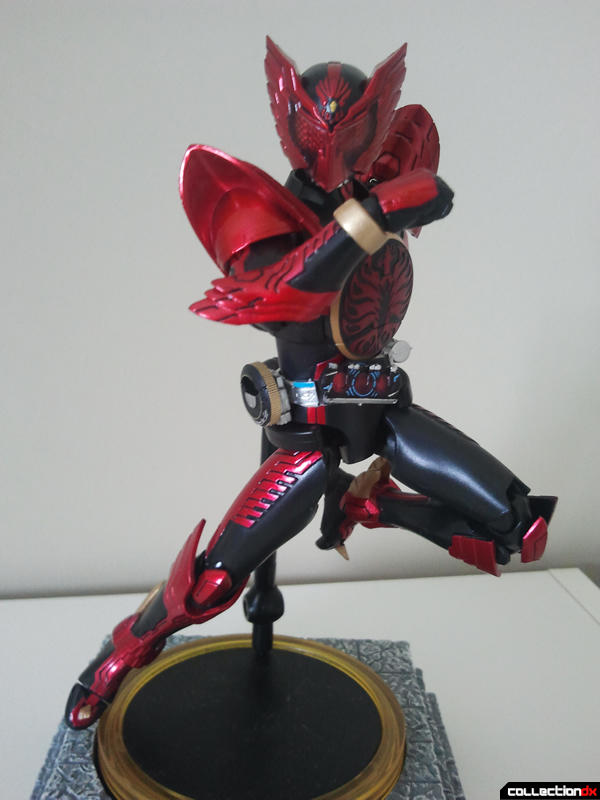 TaJaDol also comes with several accessories. He comes with the Medajalibur, one of OOO's signature weapons. Although I don't think TaJaDol ever actually used this weapon... But hey, it looks really nice. 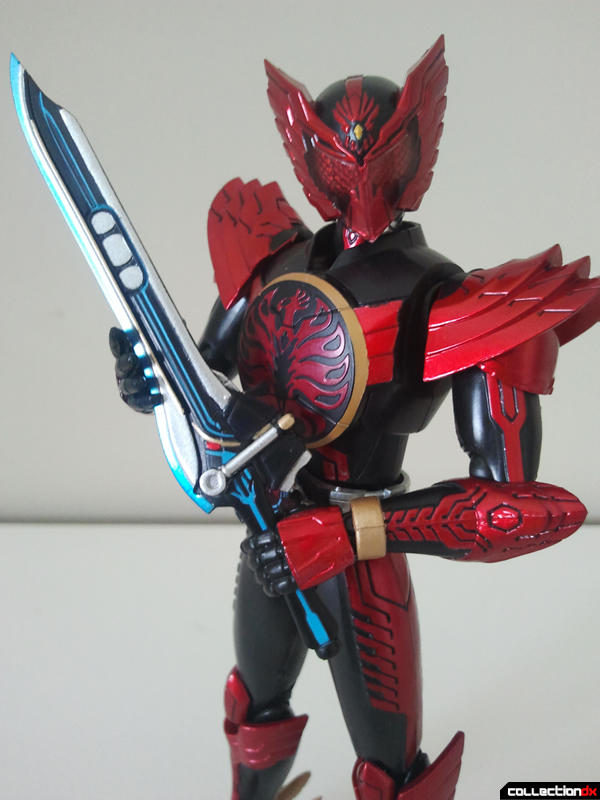 TaJaDol's other main weapon is the TaJa Spinner. A ridiculous giant red core medal that he wears on his wrist to shoot flames and things out of. It does make a pretty decent shield though if you don't care about screen accuracy. 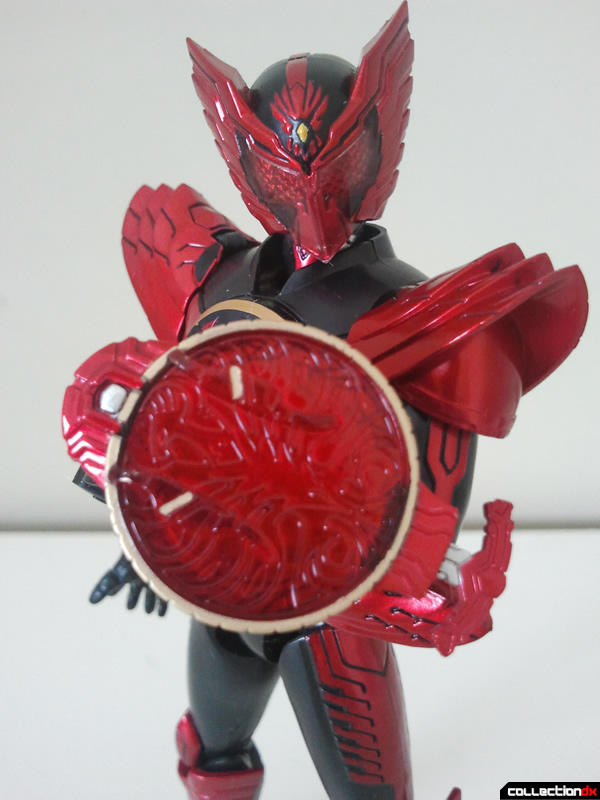 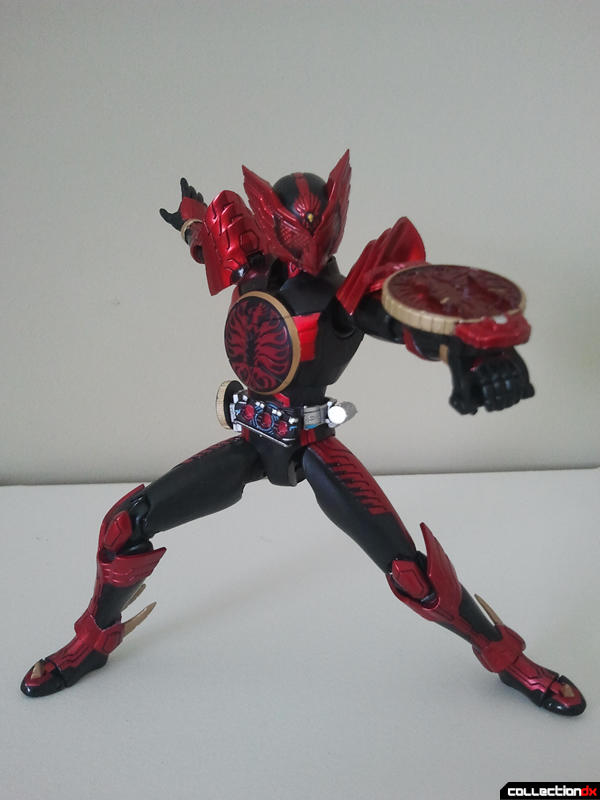 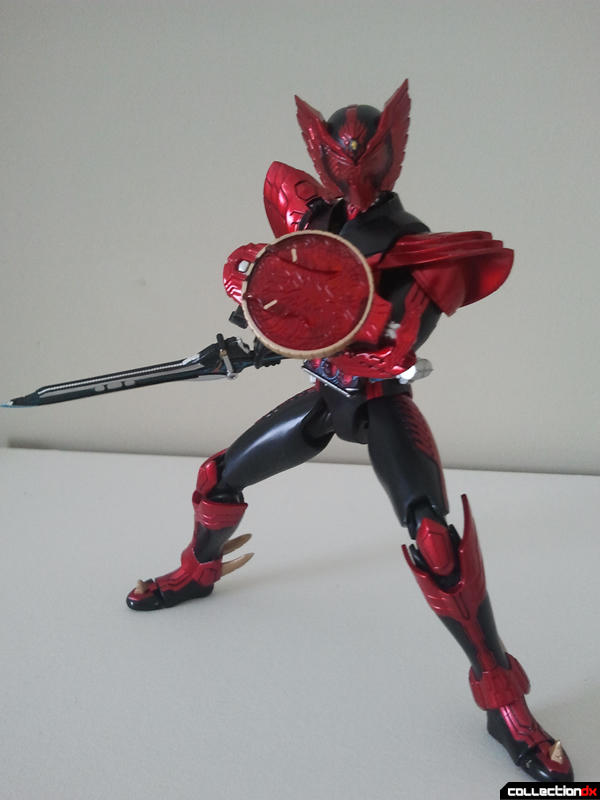 Like all of the other OOO Figuarts, TaJaDol comes with a specific pair of hands so that he can hold the removable O Scanner. It's a snug fit and helps with a lot of his finishing move or form changing poses. 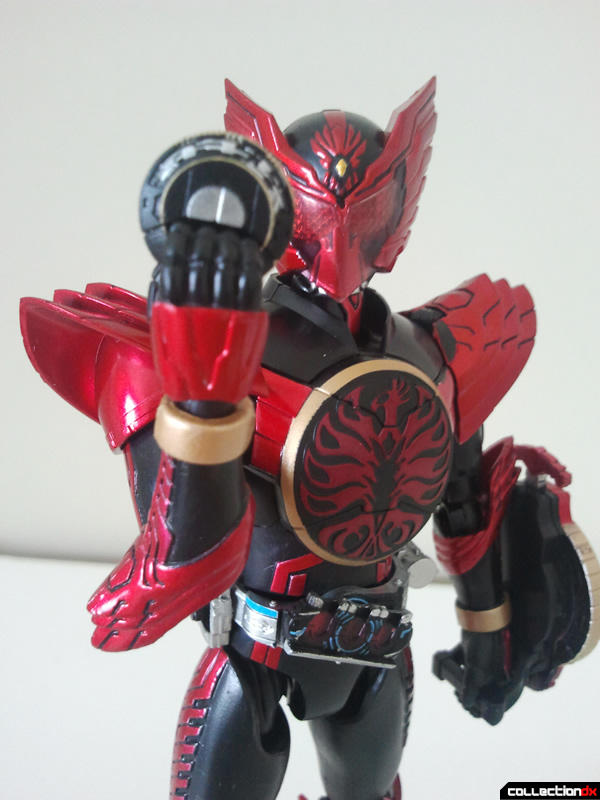 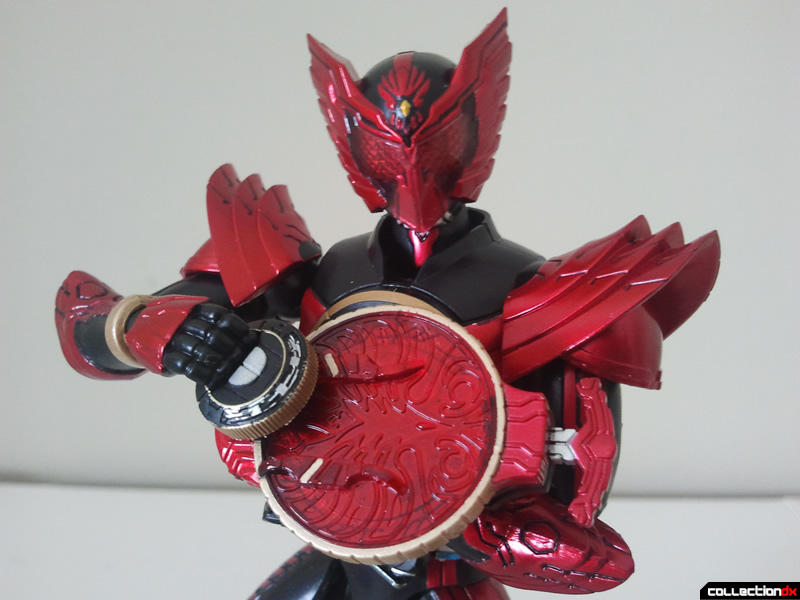 TaJaDol is better than I was expecting. With tight joints and decent accessories, I can't complain too much. The only thing that annoys me about this figure is that Bandai is releasing an effects part pack through their Web Exclusive shop. The fact that that pack exists makes me feel like this figure is missing more things than it actually is. It comes with the wings, which TaJaDol uses to fly, and his talon Rider Kick pieces which are so awesome. It leaves me just a bit annoyed that they weren't included with these to begin with. 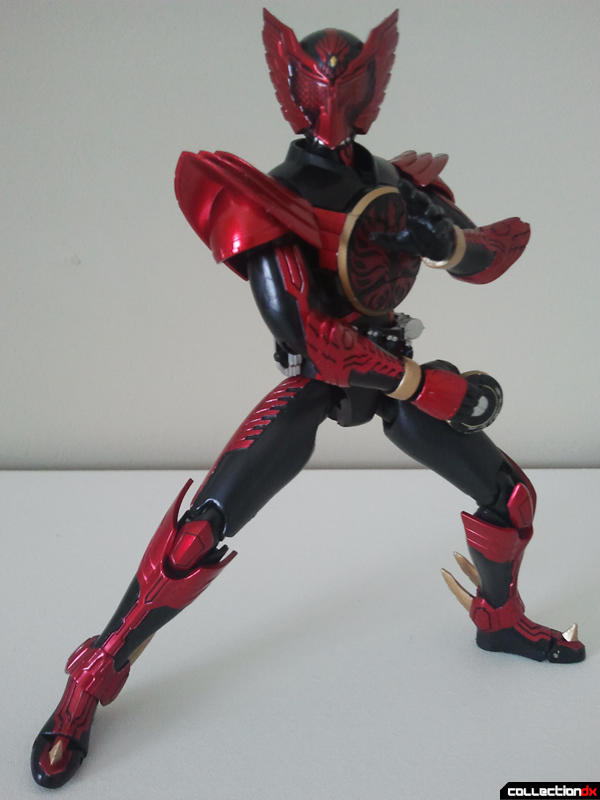 3 comments posted
That is pretty gorgeous

I'll have to pick one up sometime.

It's almost impossible to say the name without singing it.

i already have TaToBa so i'm gonna have to get this one as well, along with his other forms
(and his other figuarts kamen rider buddies)