I don't know much about Maschinen Krieger (aka Ma.K ZBV3000 (aka SF3D)) but was always somewhat interested in the gritty realist designs. SEN-TI-NEL is a newcomer to the toy scene, their first toy being the Delphine from Broken Blade. When SEN-TI-NEL announced a Ma.K figure few months back I decided I would give it a shot. 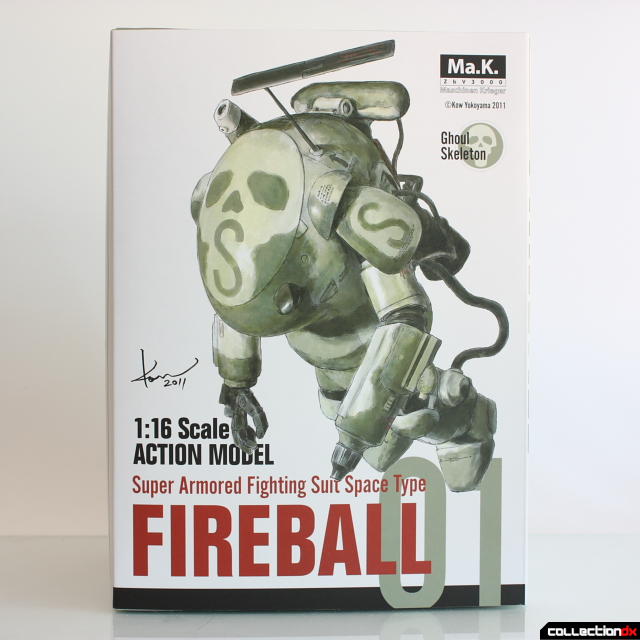 The first thing that you notice is that the box feels very high quality. The cardboard is stiff and is very nicely printed with a matte finish. There is tons of information in English and Japanese. There are also a lot of cool graphics, art and images of the toy. The front flap is secured by Velcro and can be opened to see the figure inside. 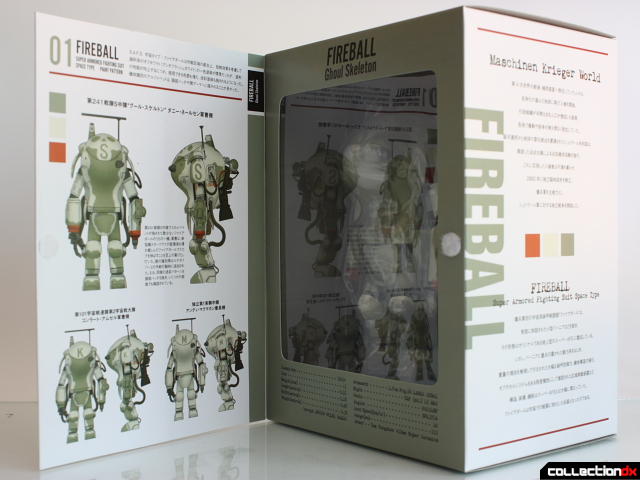 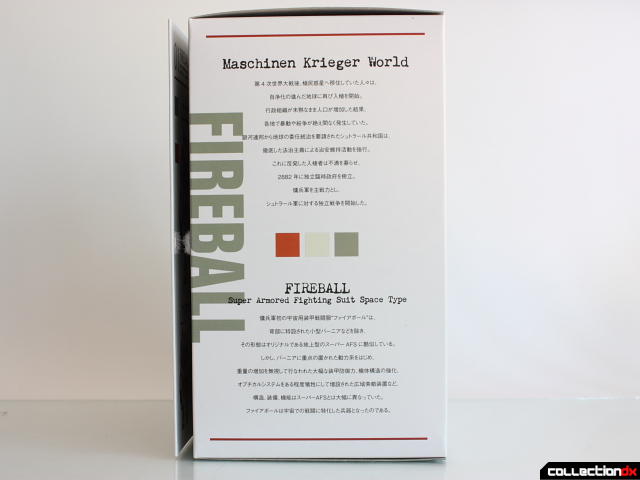 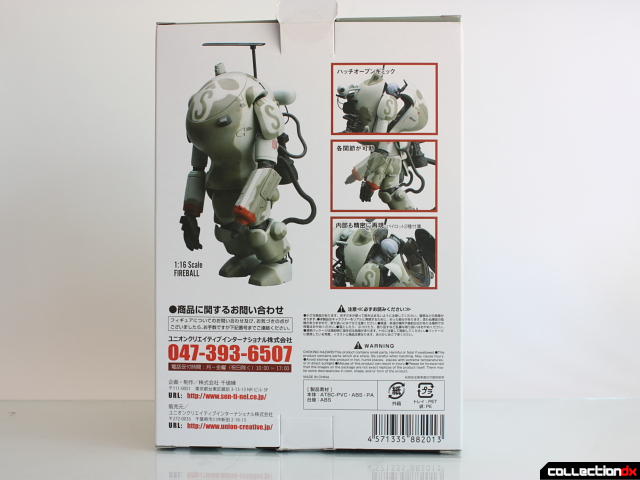 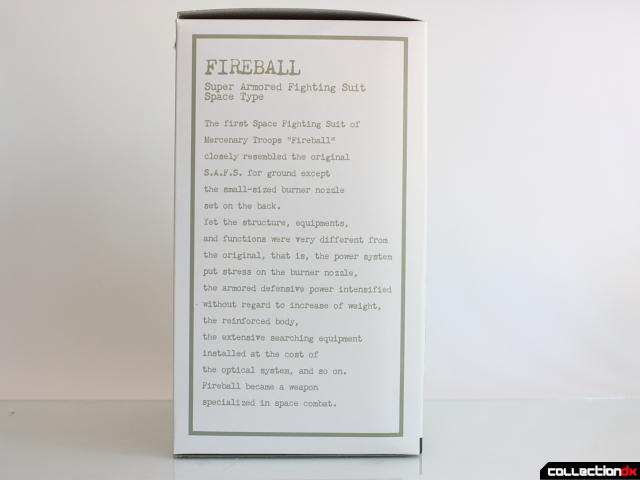 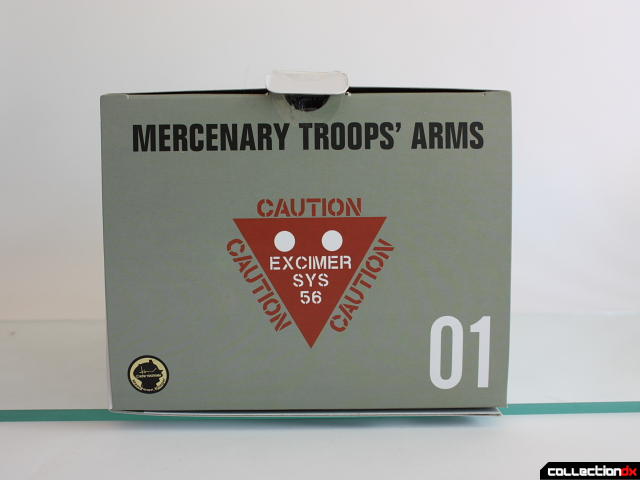 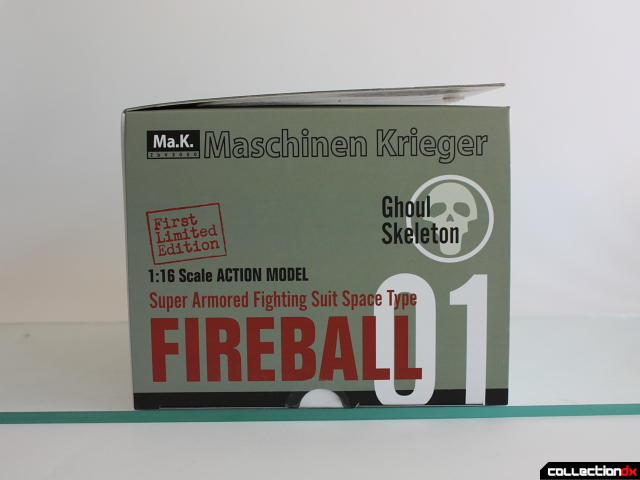 The toy comes in a vacuum formed plastic clamshell. Inside you will find the Fireball, its antenna and the female pilot figure. Some other accessories are behind the tray. This includes a stand, the pilot figure (that goes inside) and an extra hand. 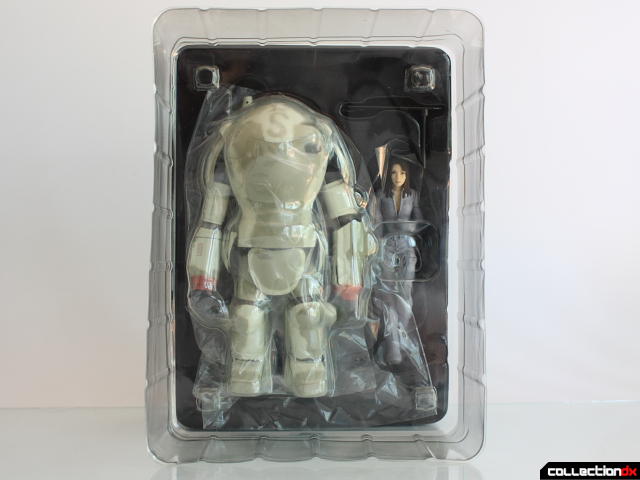 The first impression is very good as you inspect the figure and notice the intricate detail high quality paint job. It stands approximately 5.75 inches tall or 6.5 if you include the antenna. 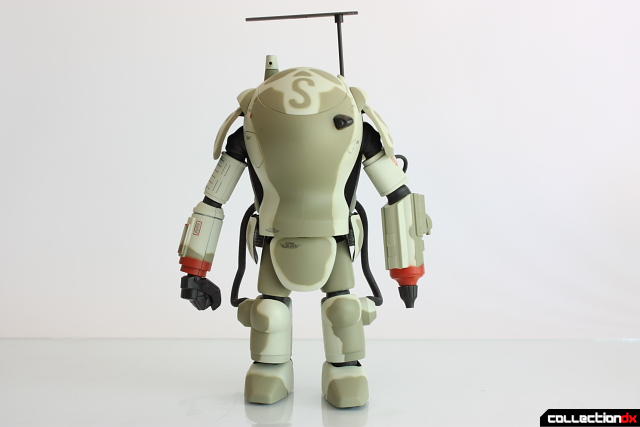 The backpack is very detailed and most of the hoses on the figure are soft rubber. All the joints also have a soft rubber covering. 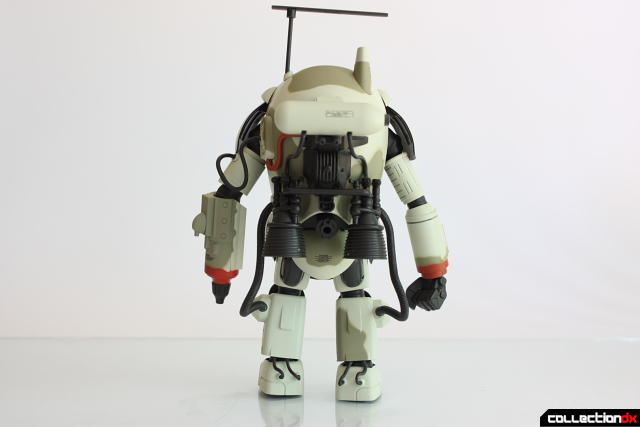 The skull on the top of looks great. 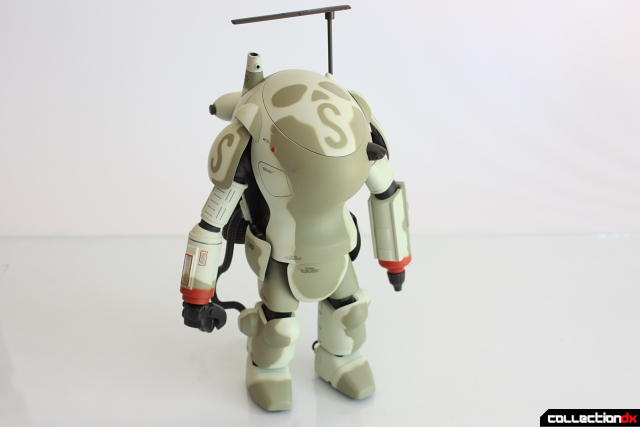 The cockpit hatch opens easily and you can see the pilots head inside. The cockpit is nicely detailed and painted grey, black and brown. 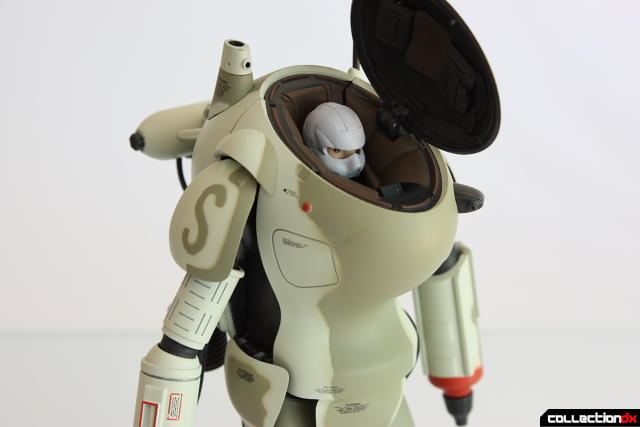 To open the cockpit simply pull up on the camera and the front half of the figure pops open. The arms can then be folded down and you can remove the pilot if you please. The pilot is just a stump with no arms and legs. She is nicely detailed and painted and fits into the cockpit easily. 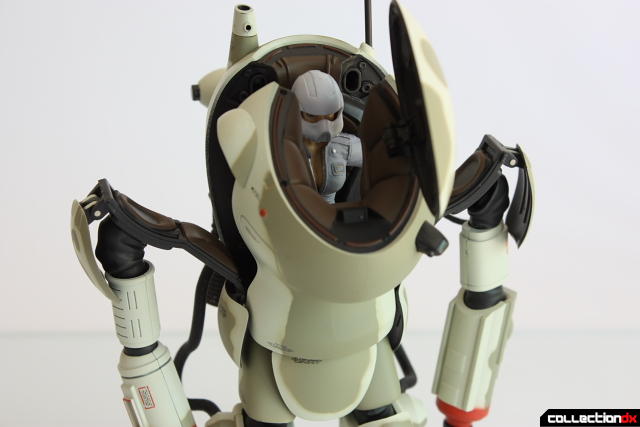 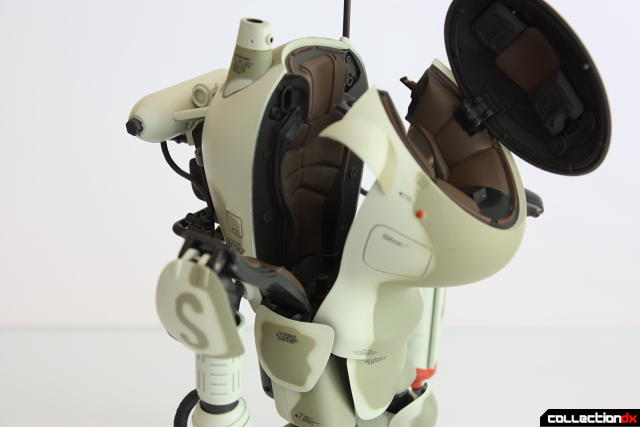 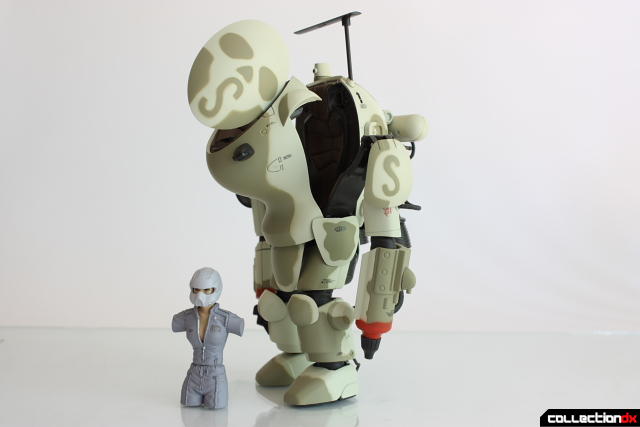 There is also a standing pilot figure included which is once again very nicely painted. Her face looks very good for its size. Unfortunately due to the pose the figure can only stand while leaning up against the armored suit (or other object). 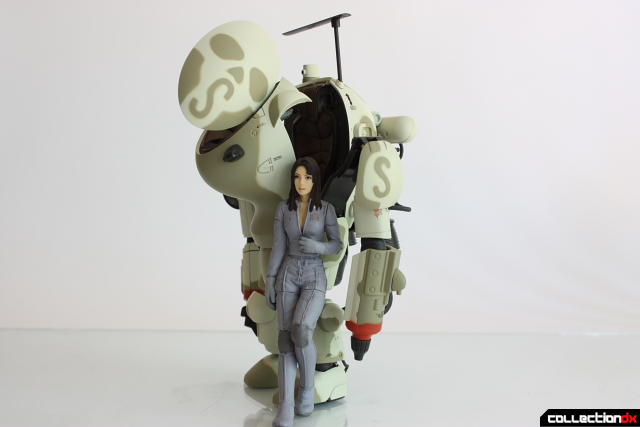 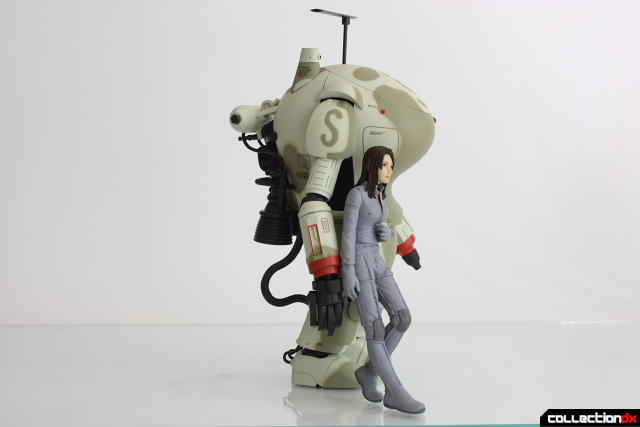 Due to the nature of the design the figure is not extremely poseable. But for what it is I think that SEN-TI-NEL did a very good job. There are ball jointed ankles, and hips, jointed knees and a waist joint. The waist and shoulder armor is also poseable. The elbows bend but do not have a huge range of motion. The shoulders are ball joints with a swivel at the bicep. They can pop off at the shoulder if you are not careful but it are easily re-attached. 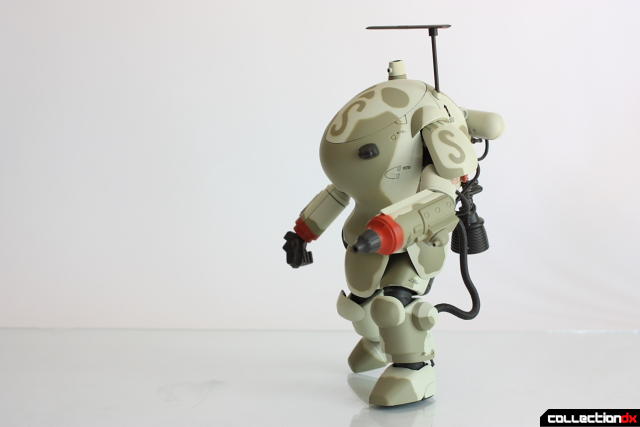 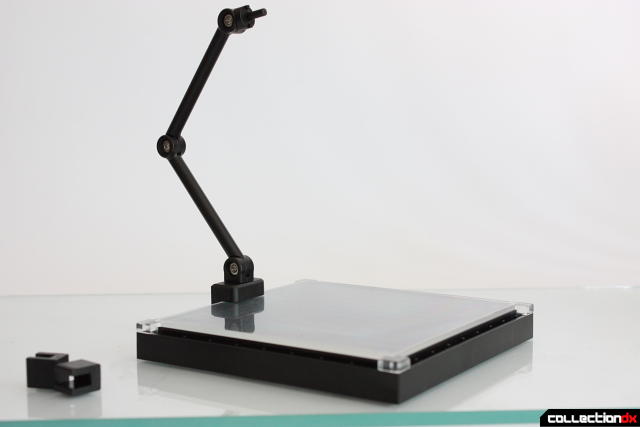 The stand plugs into the back of the figure securely just below the backpack. 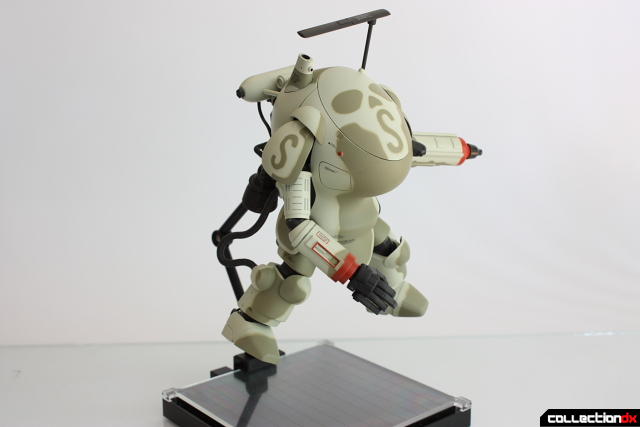 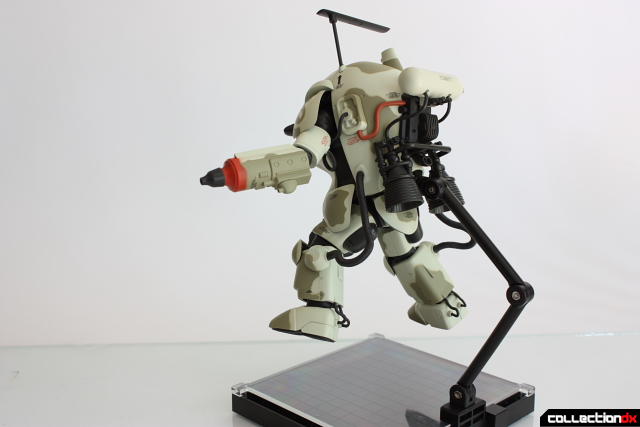 Below you can see the alternate hand. 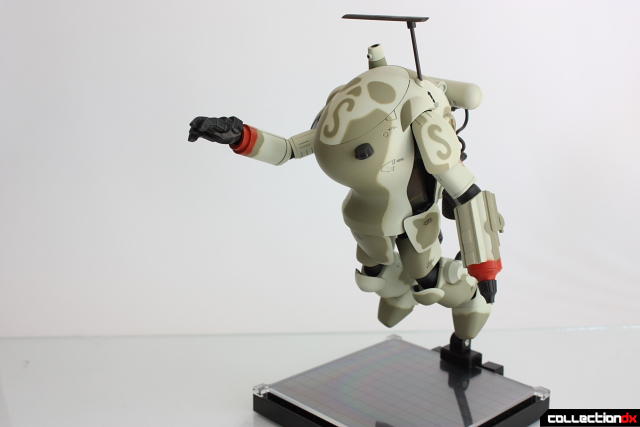 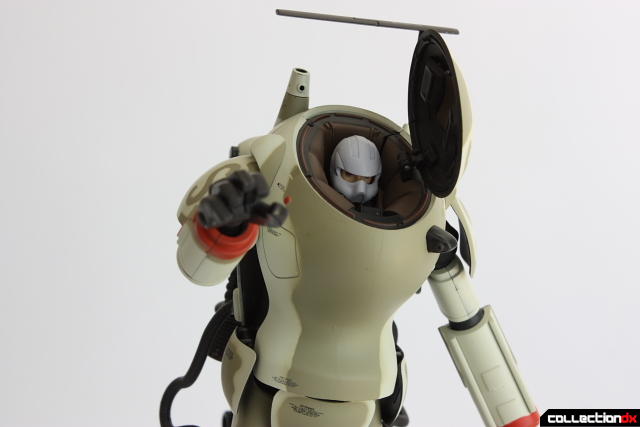 Overall I highly recommend this figure. It is a very nice toy, well sculpted, detailed and painted, and with no flaws whatsoever. The joints are tight and the figure is decently articulated. The standing pilot figure is a nice extra even though there isn't much that you can do with it. I am really looking forward to see what else SEN-TI-NEL has in store for the future. They have announced that they will be making products from Zone of the Enders, Gurren Lagann, Tekkaman Blade, Jushin Liger and Evangelion. Is there a bright future ahead of them? I think so. 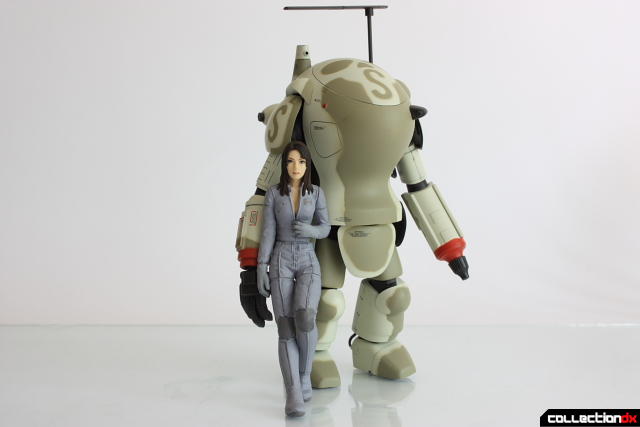 I might not have read well, how tall is it?

Sorry for the omission. The figure is approximately 5.75" tall, or 6.5 inches with the antenna included.

I've always been drawn to the Maschinen Krieger aesthetic, but I've avoided buying anything thus far, because anything of interest has been either too expensive & large, or a model kit (can't be bothered to build one).

But this is just right! time to break my Maschinen Krieger cherry baby!

Thanks for the picture intensive review.

I love that stand. And the toy's neat too!

What does this say about the state of the industry when this toy and the super expensive 1/6 scale Fireball both come with sexy female pilots?

That sexy female pilot is actually part of the appeal for me. I love toys/collectibles that come with a human figure as it gives a sense of scale. Also I don't collect female figures, all l've got in my collection is a small PVC Lynn Minmay figure & a 'cute' little Japanese train driver figure.

It's a nice little bonus when a toy comes with a cool female figure, because in my case it add's interest. Although I must say, I wish she wasn't suggestively pulling down on her zipper like that... it's a bit sleazy.