The Exbein is a personal trooper from the 2010 anime Super Robot Wars Original Generation: The Inspector. The design is an original for the anime, replacing the Huckebein MKIII which appeared in the game that the series was based off of. There is some speculation as to why this was done, but I do not believe there was ever a confirmed reason.

The toy comes in a nice window box, the design is pretty much the same as all the Composite Ver Ka. releases so far. All the parts are housed in two plastic trays. 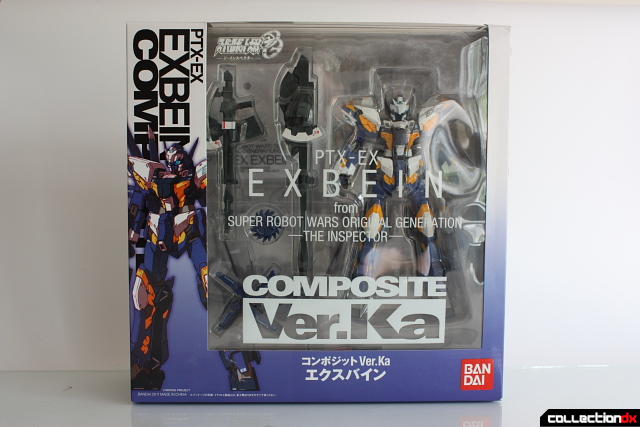 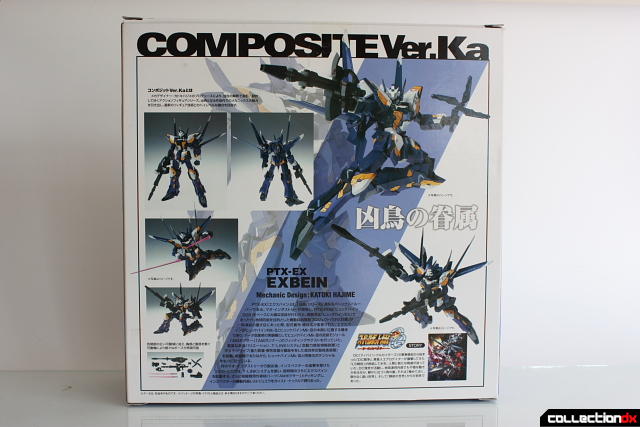 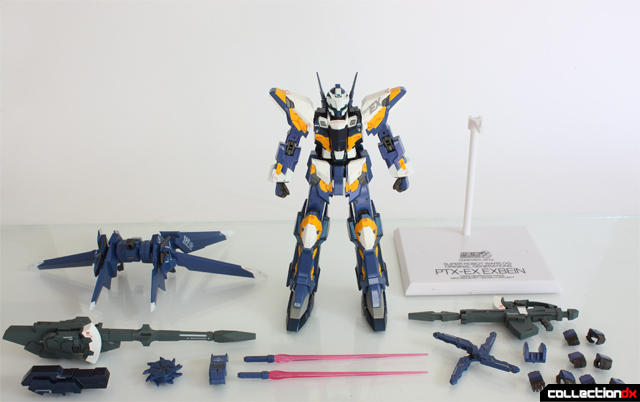 The figure stands 5.9 inches tall to the head. It is a mix of hard and medium hard plastic and feels good in your hands. The figure is very solid and does not feel fragile at all. There is a ton of painted detail on the figure, which is mostly good (more later). Printed detail is also abundant, very crisp and clear. 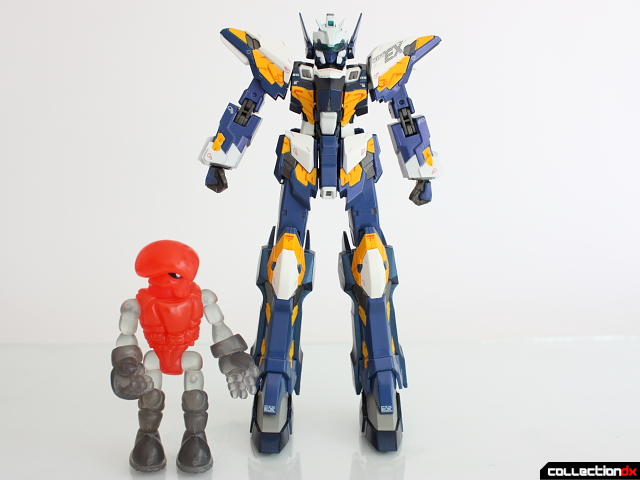 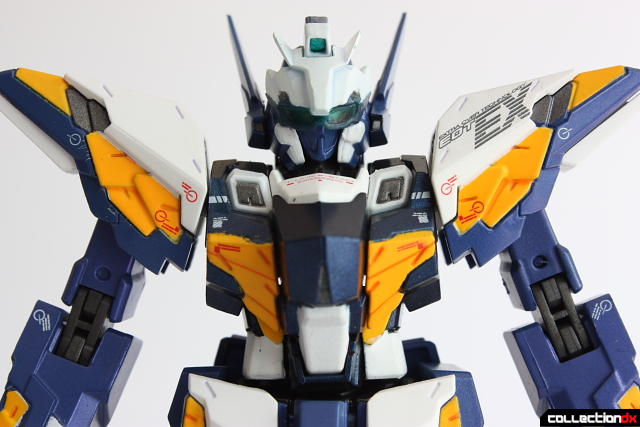 The figure is very well articulated, with an abundance of ball joints and double joints at the waist, knees, neck and elbows. 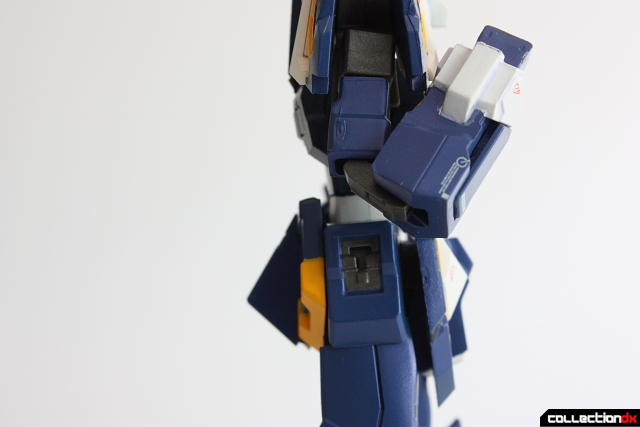 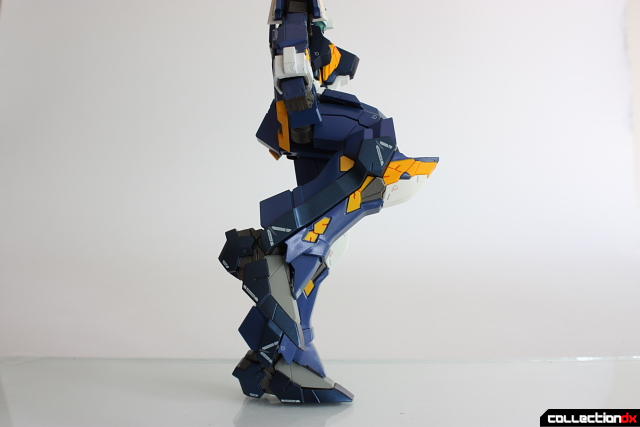 A small and large gun are included. The large gun can be reconfigured to work in the left or right hands. 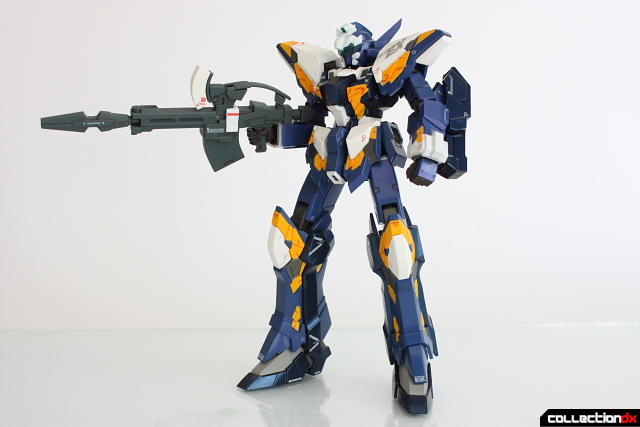 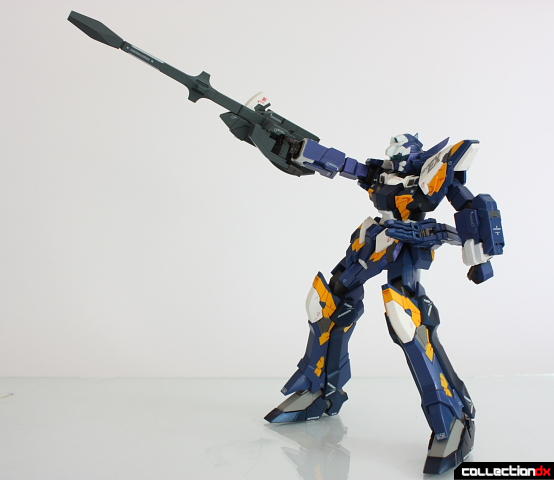 There are also 3 different weapon attachments that can be attached to the back of either forearm or to the left or right waist armor. The first one is the Chakram Shooter, which is something like a bladed yo-yo that launches from the arm. 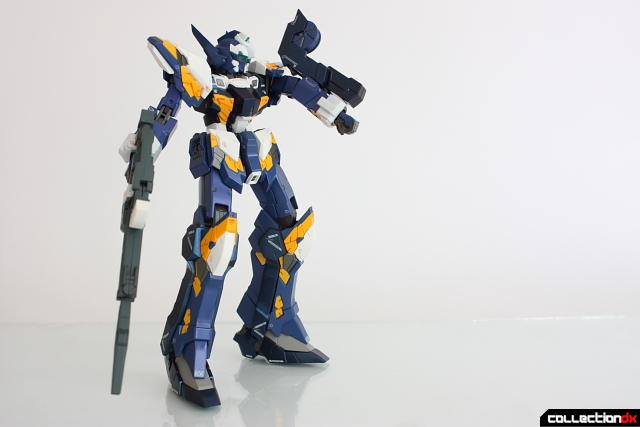 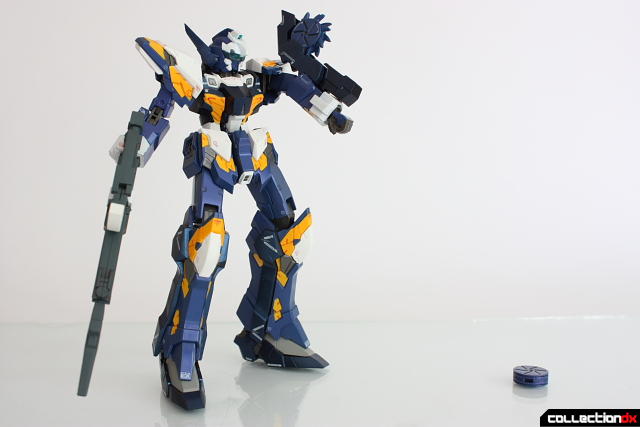 There is also the Fang Slasher, which is thrown like a boomerang. It folds up when attached to the arm. 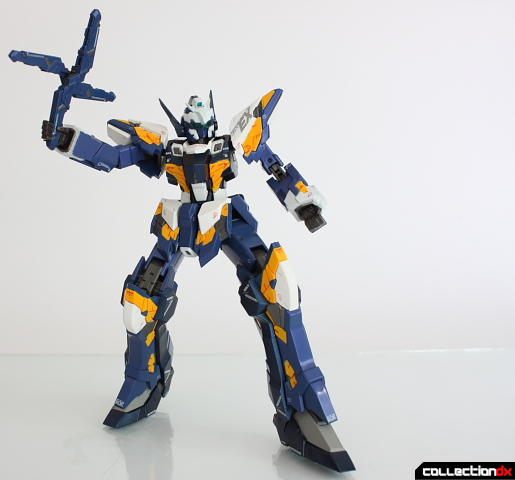 Finally there is a beam saber holder that can be attached. Unfortunately none of these weapons hold into the arms particularly well. They do hold into the hips much better. 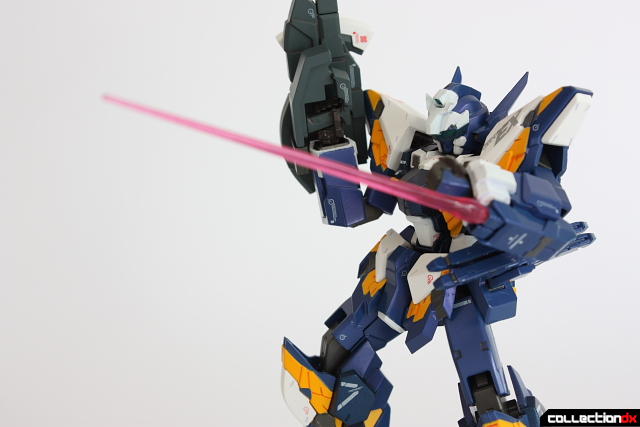 The beam sabers can be removed and placed in the hands. The blades are actually painted clear plastic instead of being molded in color. No idea why but seemed odd to me. 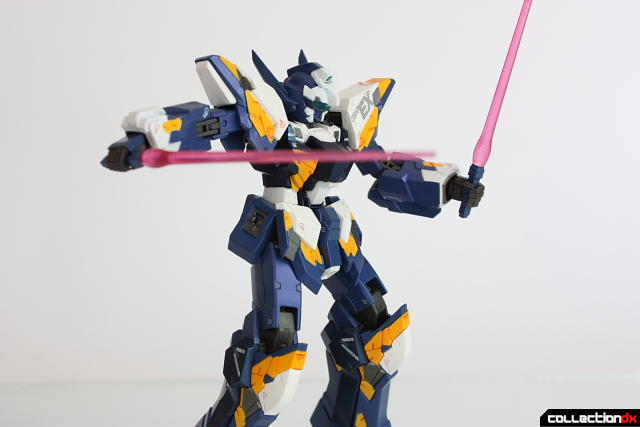 There is a flight pack included which attaches securely to the back of the figure. The wings move and the backpack can be folded up somewhat. 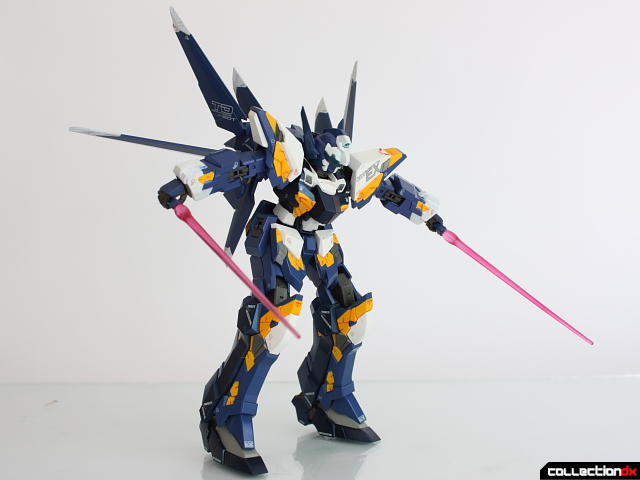 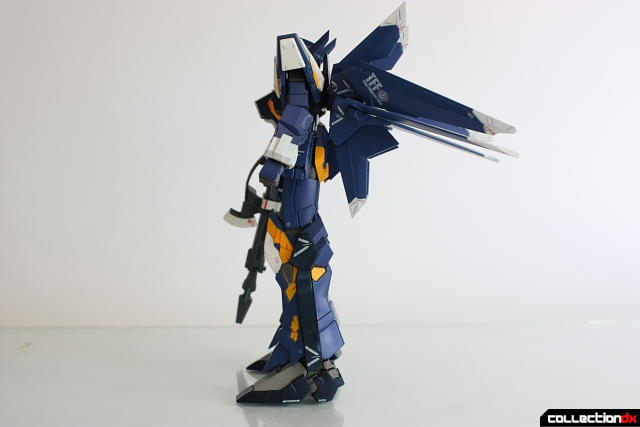 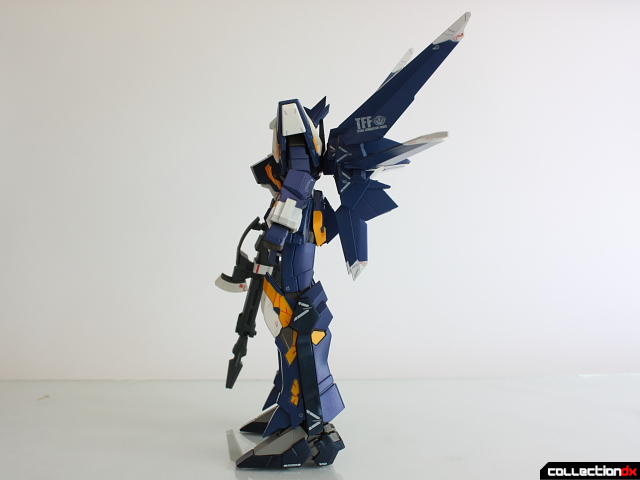 The standard Composite Ver Ka. stand is included which is pretty poor. As with the other figures in the line it is barely tall enough to lift the figure off the ground and has no articulation at all. The is some information nicely printed on it, if you're into that kind of thing. 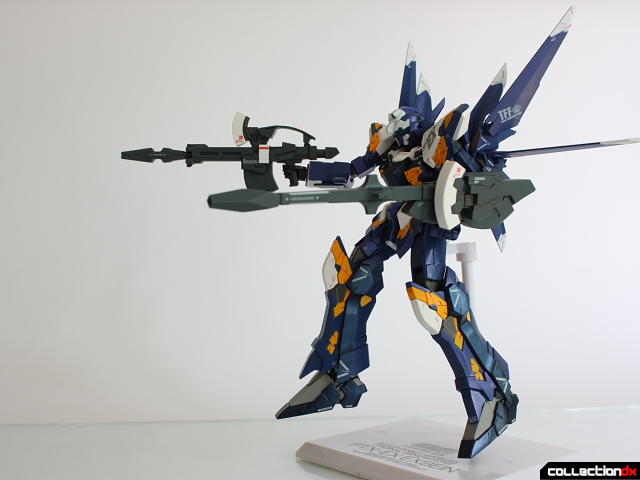 The paint on the figure is pretty good but has some issues. Not all of the edges are crisp and some areas are a bit sloppy. The white paint on the head and arms is a bit thin and you can see a tint of the color underneath. I noticed some of the paint was scraped off during the review on the right arm from the gun. 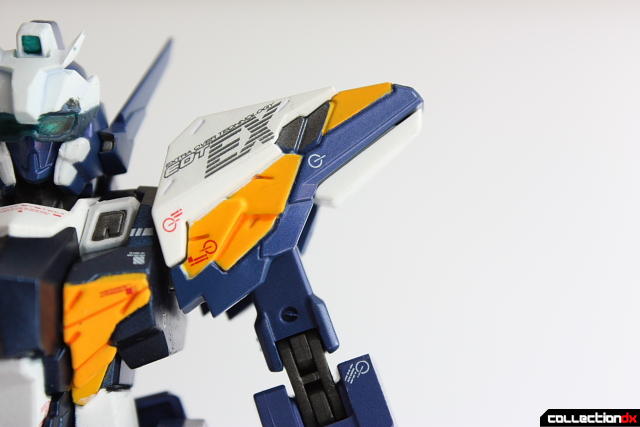 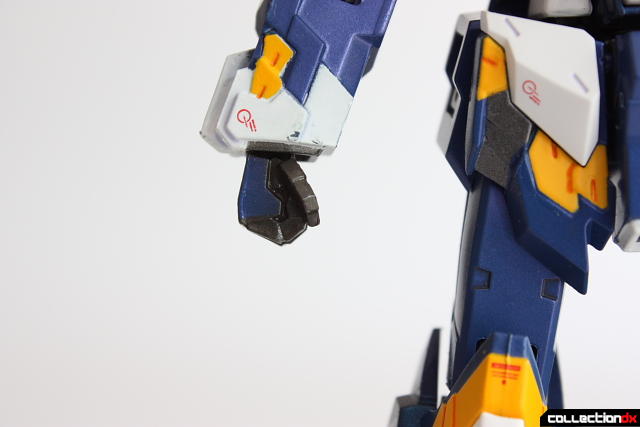 Overall this is a pretty good figure. It is very solid and well articulated. The paint is pretty good, as long as you don't look too closely. At 6,090 yen I think that it is a bit expensive but it seems like everything is moving this way across the board. 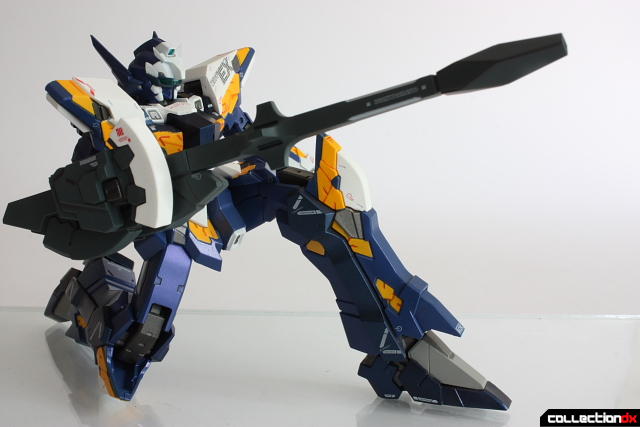 You can pick one up at HobbyLink Japan (Hlj.com)

I always liked the design of the Exbein, but found the price too expensive for such a small mecha. Thankfully HLJ place these on sale and I jumped in.

Your review shows the strengths and weaknesses that this toy has in design, painting and accessories. Indeed the weapon attachments hold a lot better on the hips than the arms, I fixed this problem using the classic nail polish trick, and now the beam sabers holster holds up pretty well on the left arm.

I have been trying to pose the Exbein with all of his weapons, but found out it was not possible because they get in the way of each other. This is quite noticeable with the big gun, when it is placed on the arm there is no room to connect any of the other weapons to that same arm. Also most of these optional parts cannot be placed, especially on the hips, when the backpack thrusters are connected.

It has an awesome design and the color is quite unique, setting him apart from other robots. Is one of my all time favorite mecha.

Surely, the Exbein is one of the best designs of the SRW The Inspector anime, I just love that backpack and the Gundam-ish design. The amount of acessories also make this figure very interesting, but the price... makes me wait a super sale with at least 35% off to get it :(

By the way, I saw at Amiami that the first run came with a special disk (don't know if it's a CD or a DVD). Does someone know what is the content of the disk?

I believe it was an episode or two or the show. I could be wrong though.

Also, I'm oddly enough not too big into this design. I think it's the visor that's bothering me. Seems slightly redundant.