To better understand the development of this mech, here is a little information according to fullmetalpanic.wikia.com:or skip it to see the toy.

"The Arm Slave is a development of the Reagan Administration Strategic Defense Initiative's research in the 1980s into powered exoskeletal suits to increase the ground soldier's combat capability. Called the XM3, the first powered suit was nothing more than a powered exoskeleton sized around 2 meters tall. This proved to be of low combat effectiveness as it offered little advantage in protection in exchange for its limited mobility. This early prototype was hampered by the lack of a suitable power source that did not burden the unit past its useful load.

The designers took an unorthodox approach in the development process at this point. While technology usually is refined to become smaller and more compact, the successor XM4 project took an opposite direction. By increasing the size of the suit from 2 meters standing to around 8 meters, the designers were able to change the power source from an electrical battery system to internal combustion engines. With the advances in material sciences and engineering at the time, the tremendous increase in power to weight ratio of diesel engines and the artificial muscles constructed from electroactive polymers (EAPs) (later refined and called Muscle Packages) made the XM4 a viable weapons platform with a sizable payload. By increasing the payload of the powered armor, and expanding the capabilities of the unit by various electronic warfare packages and options the first generation, and inaugural Arm Slave was introduced to the world as the M4.

One of the most notable aspects of the development of the Arm Slave is the curiously short development span. It took only three years from start of the XM3 project to the resulting M4, an unheard of development span in weapons technology when equivalent civilian robotics was struggling with bipedal motion. The unnatural advance in technology was attributed to extraterrestrial sources by some publications, and managed to fuel a new generation of conspiracy theorists. Soon, the explosive evolution of the Arm Slave in the battlefield reduced its prominence to just another high tech weapon system, alongside the cruise missile and stealth jet fighters.

The Codarl is an Arm Slave developed by Amalgam and is known to be the first to utilize their experimental Lambda Driver. Specific design data on the Codarl are not known, but in combat it has outclassed the M9 in both speed and agility even without using the Lambda Driver. The Codarl limbs were modeled after feline and insect legs giving it added mobility and jump distance. Its most distinctive feature is the pony-tail like attachment on its head, this does not appear to serve any other function than being a decoy."

Full Metal Panic's Codarl comes in your standard run-of-the-mill Robot Spirits box meaning its a small thin box with a big window on the front showing the contents and a few shots of the figure on the back. 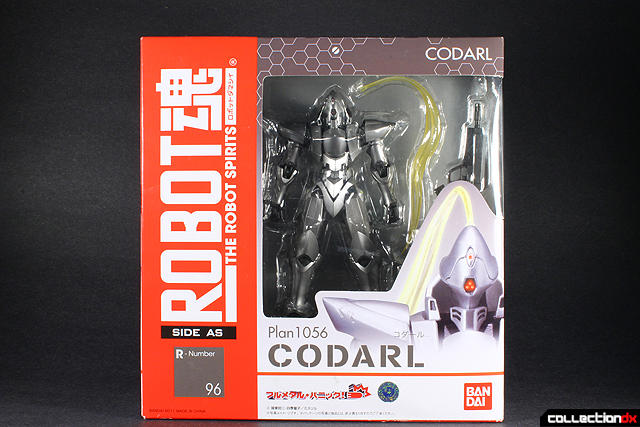 The contents are neatly laid out on a plastic tray. You know the type, the ones that explode all the pieces into the smallest crevices in your room when you try and snap the cover off. 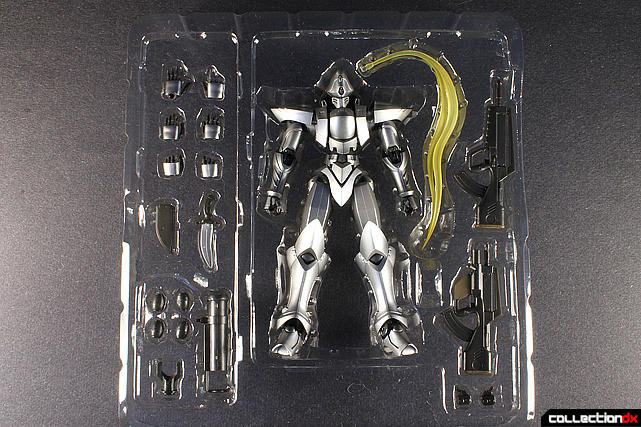 The figure itself is quite nice. Codarl is nicely rendered in this release. The silver finish is done real well. There is not much in the way of detailed paint apps aside from the red sensors on the head and lime-green spots on the hips. 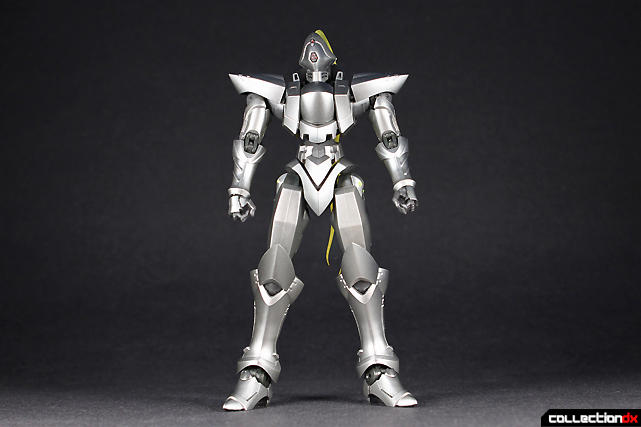 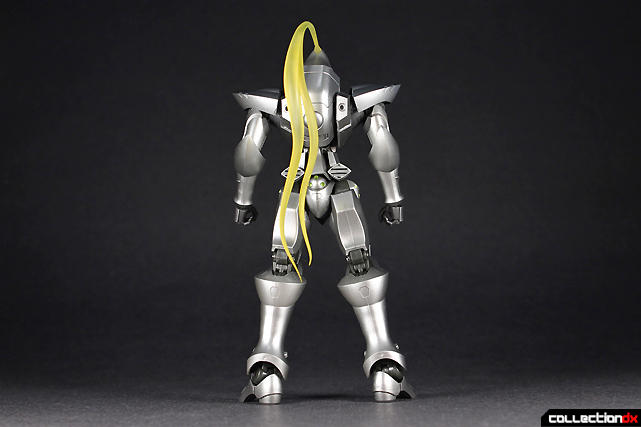 Articulation is top-notch as expected. There are points of articulation practically everywhere. 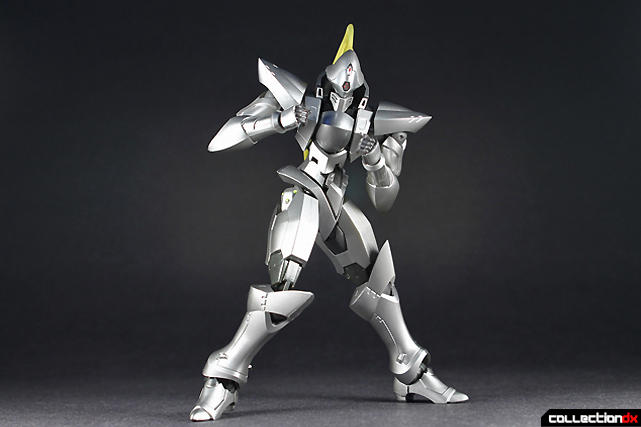 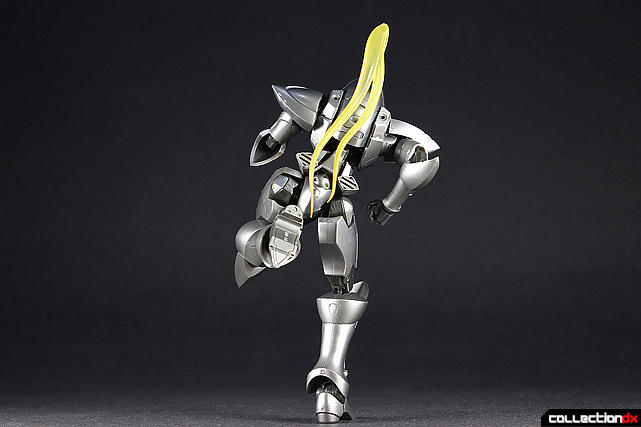 The knees have a great double joint to allow a fully bent position of the legs. No strings or stands were used to balance Codarl for this shot. 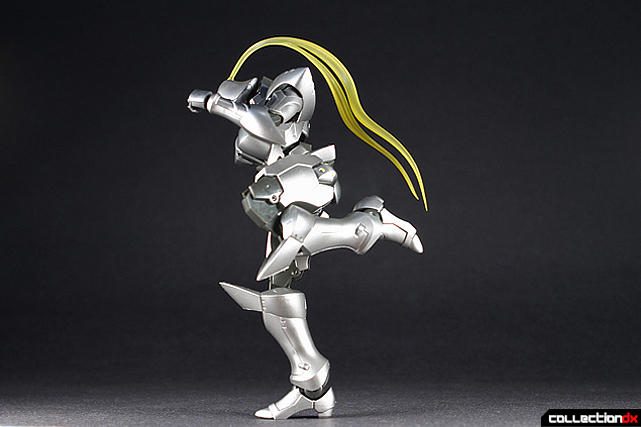 The figure's articulation also allows for effortless kneeling, although it's not a complete kneel. Any further kneeling cause the figure to pitch to one side and look unnatural. 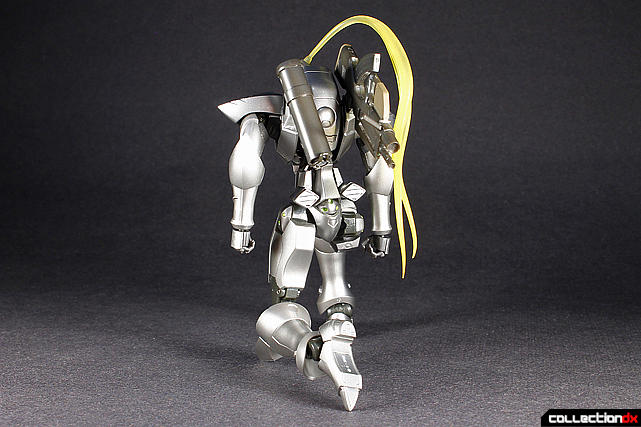 The elbows also employ a double joint for maximum poseability. 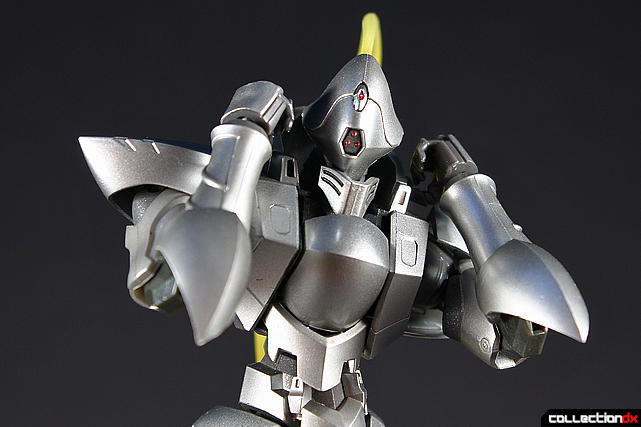 Codarl has no butt-hole/stand receptacle anywhere on his body, which is good for aesthetics, however Bandai has you covered. They include a piece that clips to his butt-cheeks to allow the use of his stand. 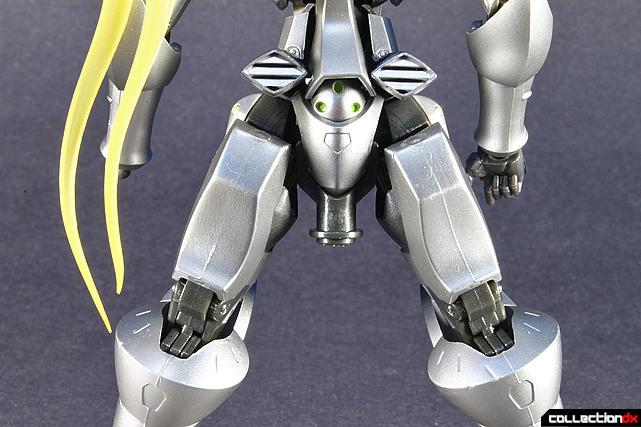 Up close you can see the head sculpt details. Notice how small and precise the paint applications are on those little red sensors. 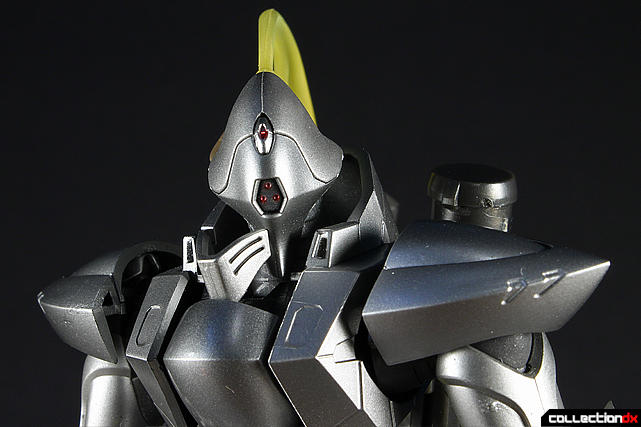 Codarl is a equipped with a few weapons. He has two included rifles that can be stored on his back, or mix and match with his other weapons. 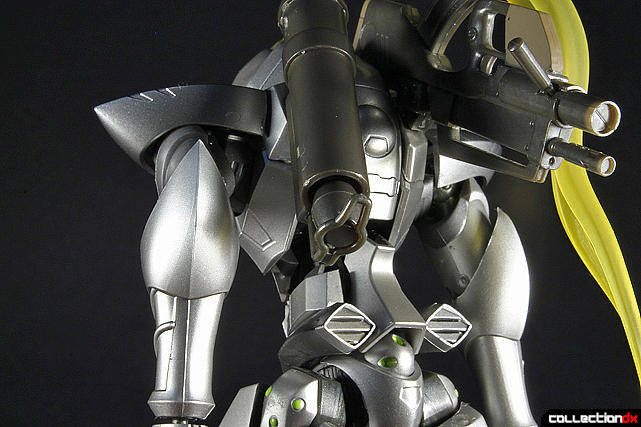 Shown above with one of the two rifles is this mortar type weapon/grenade storage. It comes with a cylinder that can hold four grenades. A sliding clip allows insertion/removal. 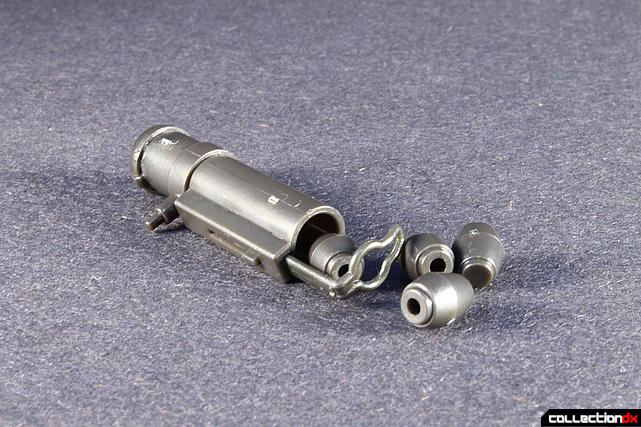 He also comes with a cutter that can also be stored in the back. To do this you must remove a teeny weeny cover. Be careful your first time. This cover can be seized and very hard to remove. Using your nails will probably just chew away at it. I ended up using the tip of an hobby knife to carefully work it out. 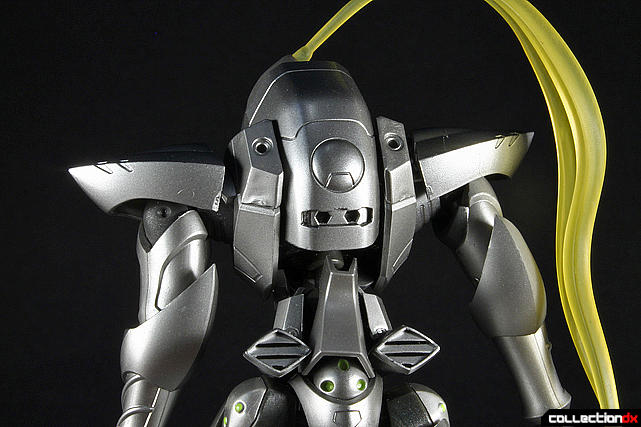 The cutter sheath clips to the two little holes left where the small panel was removed. The cutter can be stowed here when not in use. 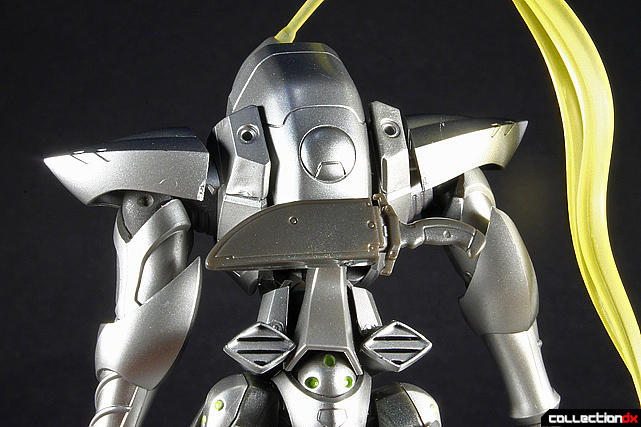 But what good is having weapons stowed away? 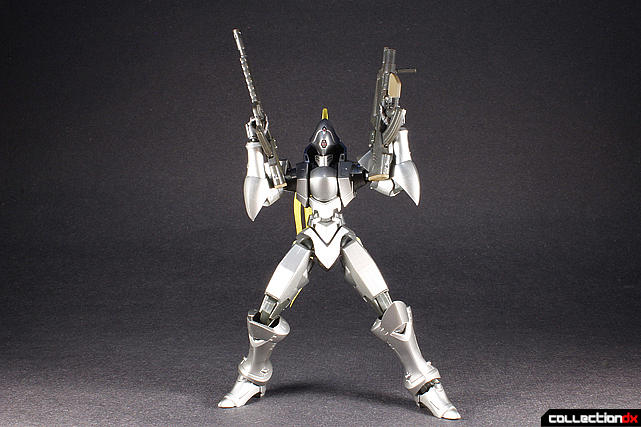 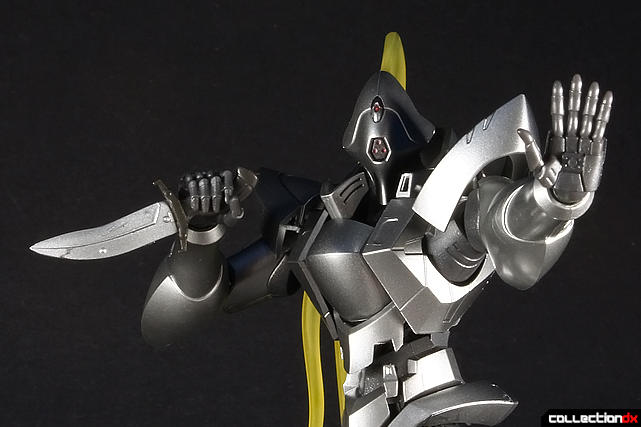 The hands have such a nice crisp sculpt for being such tiny things. You get a variety to suit various poses. Look at how well sculpted the hands are, they grasp the gun perfectly and the trigger finger is right where it's supposed to be. 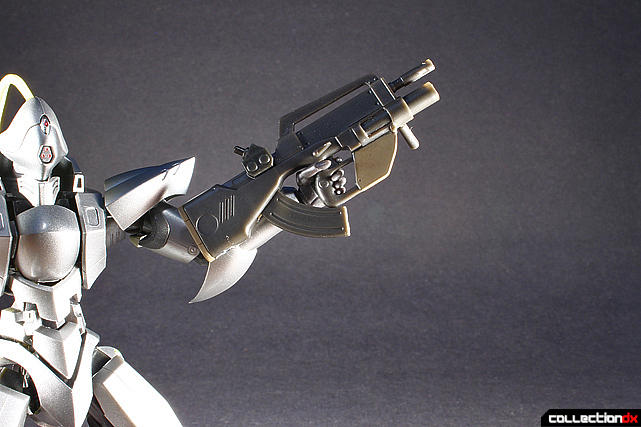 Of course it comes with a pointing finger hand. 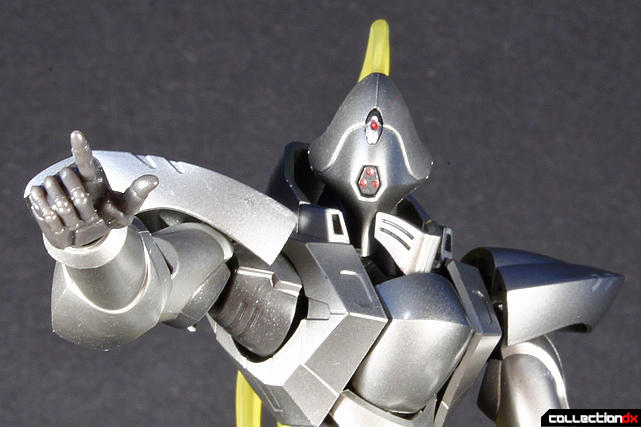 As usual, a nice Robot Spirits release. Each piece I review makes me a bigger fan of this line. Make sure you save up those pennies, the price to size ratio is not in your favor. However the price is not based on size but execution...something that doesn't always go hand in hand in this hobby. 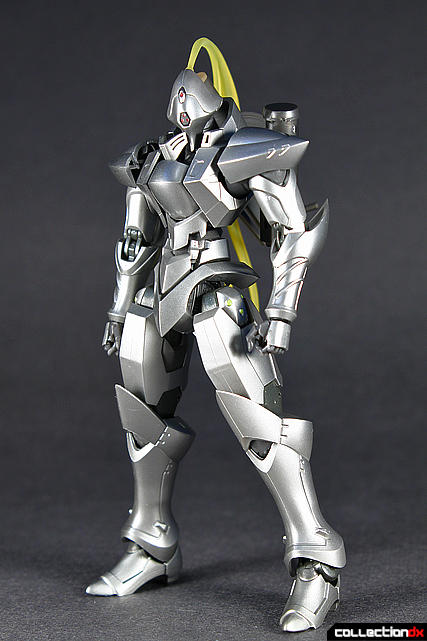