Gundam Sentinel is understandably the most famous of the Gundam mobile suit variation spinoffs, as it's not only full of some of the Universal Century's largest robots, it also jump-started Hajime Katoki's illustrious career. The Ex-S Gundam is one of my favorite designs in the franchise: an enormous and incredibly powerful mobile suit that battles against the New Desides and their Gundam Mk-V. So when I happened upon the third-party Ex-S Gundoom, I thought it might be a fun build. I don't think I've ever been more wrong. 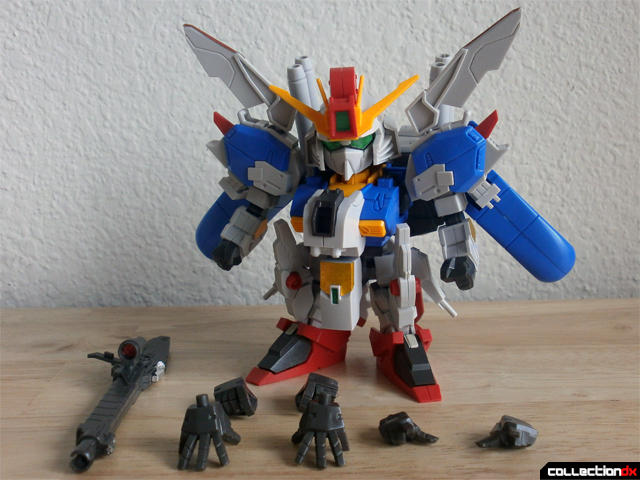 Unfortunately I no longer have the box to take pictures of, which is a shame because the box art is by far the best part of this model. The Gundoom is built out of eleven trays, including two for polycaps and one that's a lone transparent green piece. Unlike my previous experience with third-party Gundam kits, the pieces actually fit together, but not well. On more than one occasion the legs exploded when I was trying to get the knees to stay attached. I gave up and stuck them and the side skirt armor on with cement. For accessories you get three sets of hands (splayed, pointing, weapon-holding) and the Ex-S's Beam Smart Gun. 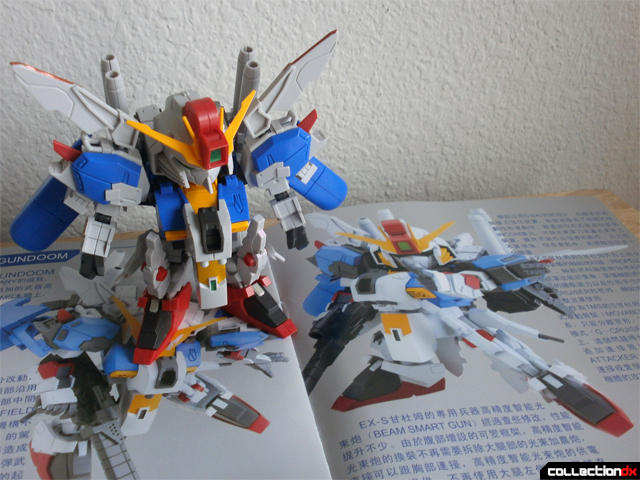 Before you even start assembling the Ex-S Gundoom, you can see just how wrong the colors on this kit are. The white is faded, the yellow is sickly, the gray is much too dark, and the blue is distinctly not the shade it should be. At least the red looks alright. 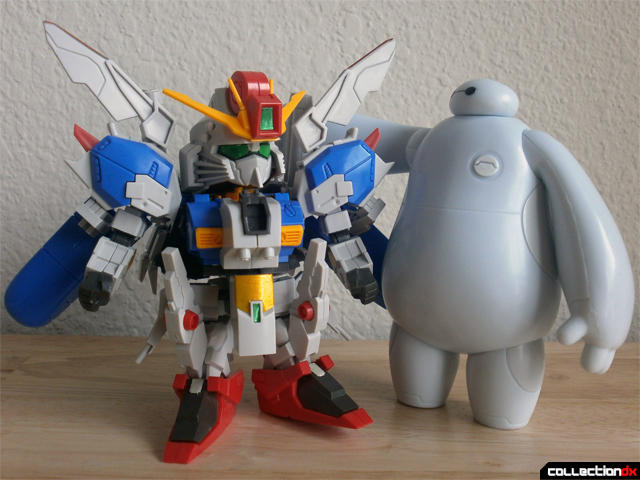 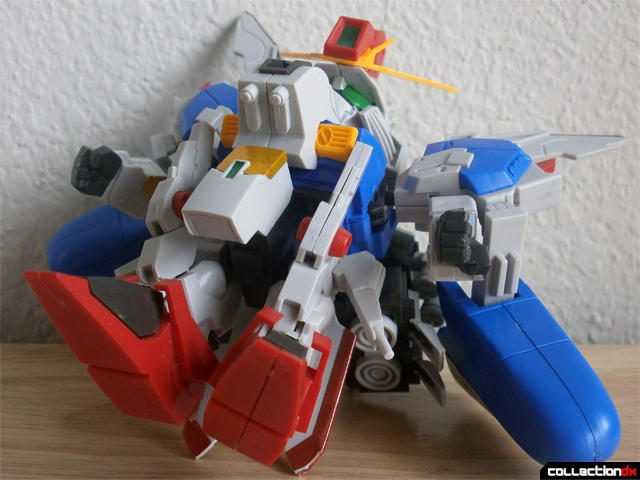 Nise Gundam is currently on vacation, so four-inch-tall Baymax is here to provide a size comparison instead. He's also providing support, the Gundoom falls over a lot. But the Ex-S is a bulky and back-heavy design, so I can't fault this kit too much for that. 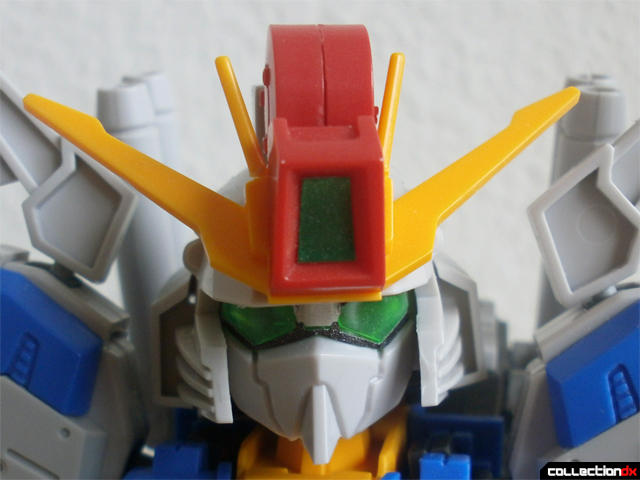 At this point I feel I should mention that this build took me nearly two years. Over that period I would start it, give up for several months, before trying again and inevitably quitting once more. The time spent actively building this kit was it terribly frustrating and soul-draining. Every time I picked up the Gundoom again, I remembered that for the $25 I spent on this piece of junk, I could have bought the actual, official High Grade Universal Century kit.

Forgive me Bandai, I swear to never stray away again. My first ragequit was before I even finished the head, which is supposed to have an LED feature in it: by pressing the back panel, the eyes light up. I spent two hours trying to get it to work without any success. On top of that, the small antennae on the V-fin broke off before I even got the part off the tray, but fortunately hobby cement fixed that too. 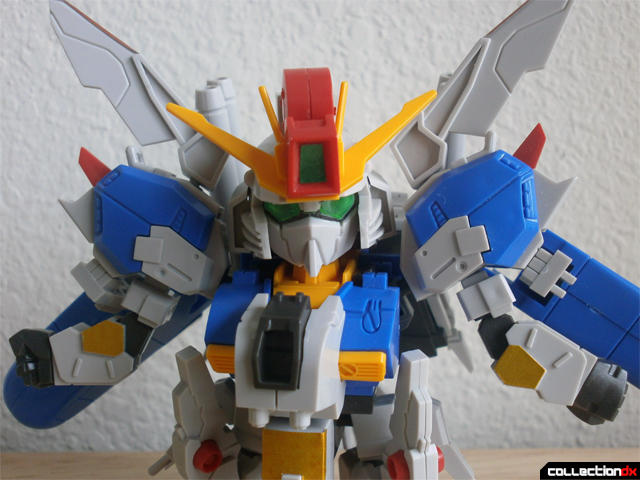 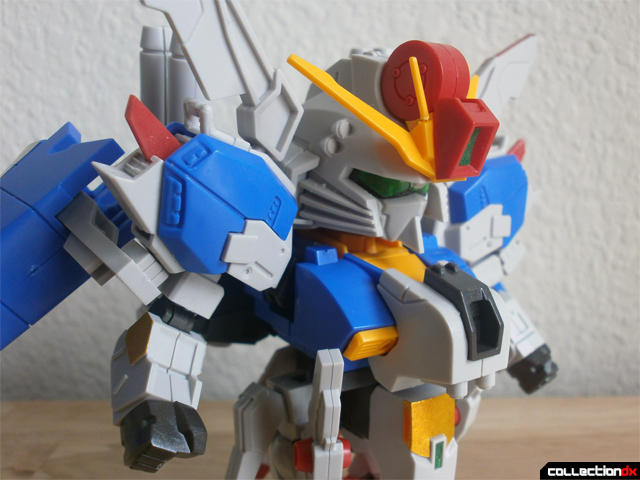 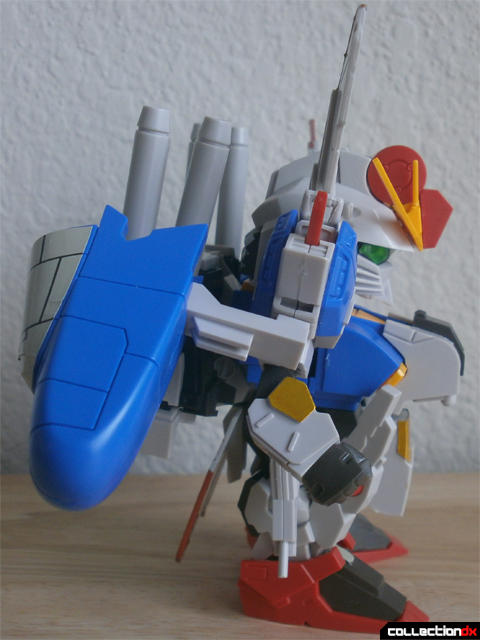 The arms are probably the least bad part of the Ex-S Gundoom. Not only did nothing in them break, they have a decent range of motion for an SD kit. It bears mentioning that the only ball joints on this entire affair are in the feet, everything else is on a peg, even the hands. 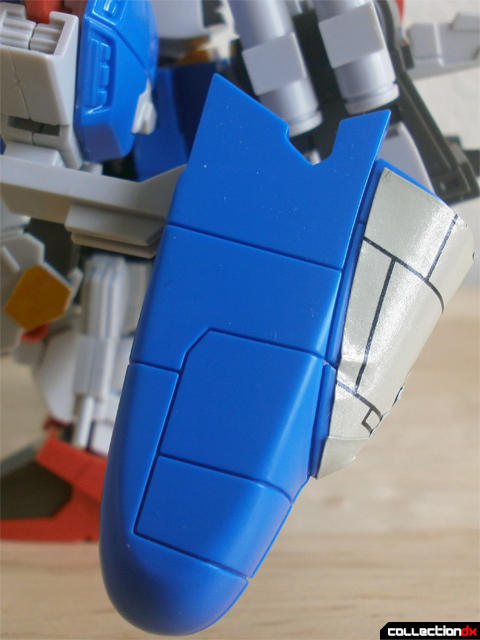 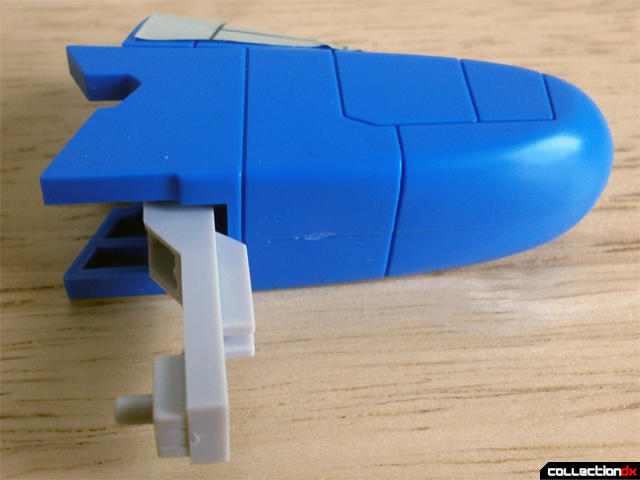 The other amazing part about the arms is that the armored propellant tanks manage to remain on the shoulders without cement, in stark contrast to everything else hanging off the Ex-S. This is offset by how terrible the stickers for the tanks are, they're ill-fitting and even more off-colored than the plastic. In fact, the stickers for the Gundoom in general are nonsensical. Some of them not only don't belong on the kit, but also are impossible to put on properly, and will tear when you try to get them off the sheet anyway. Even worse, some other stickers aren't even remotely in the right color: yellow stickers are provided for the elbows, which are supposed to be red. 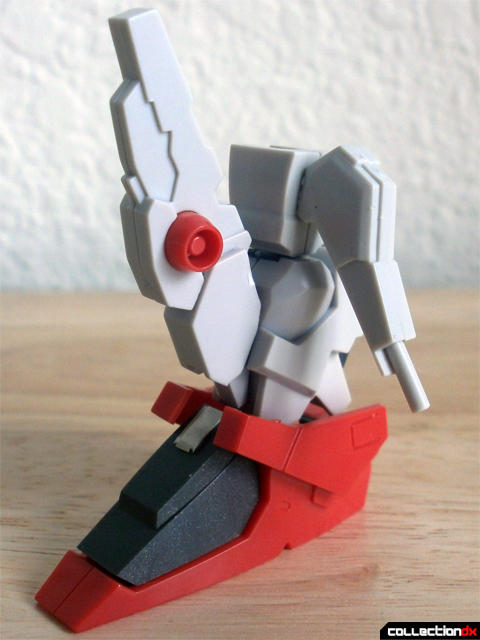 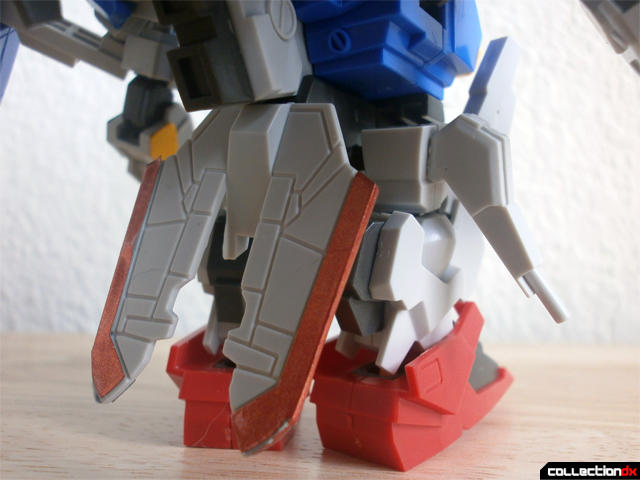 Now onto the single worst part of this kit: the legs. As mentioned earlier, they will explode when you try to attach the knees or side skirt armor. The Ex-S Gundam's knees are supposed to be enormous, but I doubt they interfere with movement nearly as much on other models. When the legs aren't exploding they have a decent range of motion, but the knees hamper that so the most you can do is get it to stand up if you're lucky. 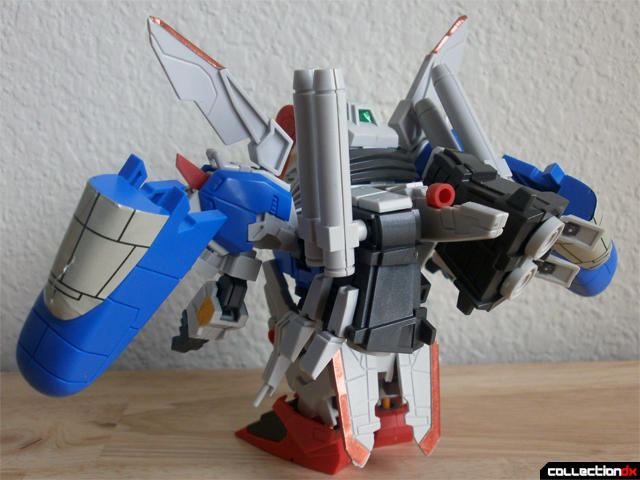 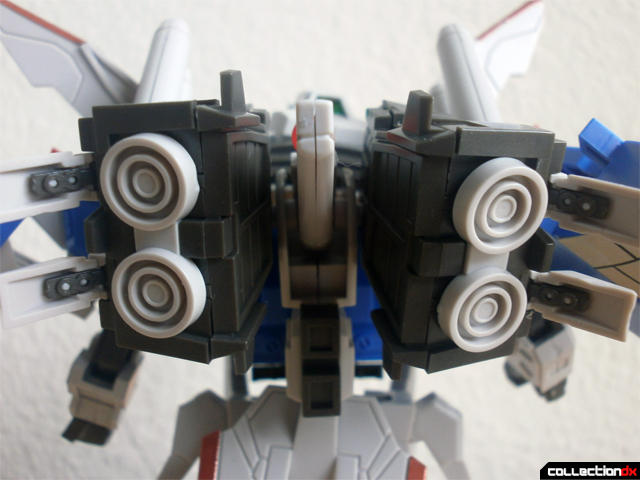 Lastly, the boosters, where the parts don't fit together like they feel they should, but stay connected despite that. The two fins on each booster are movable but very loose. The cannons have the opposite problem, they're a very tight fit. 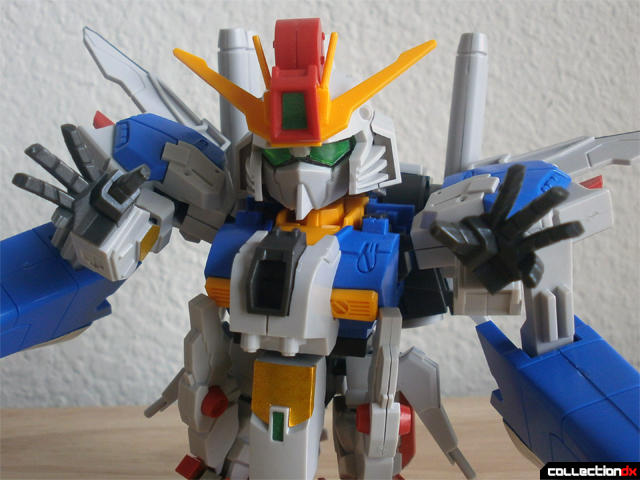 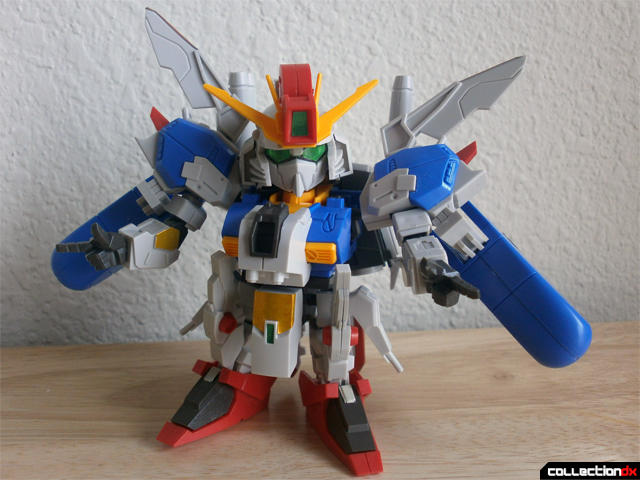 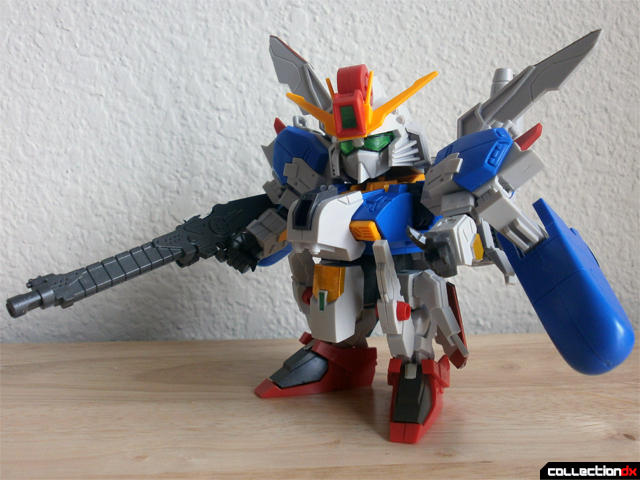 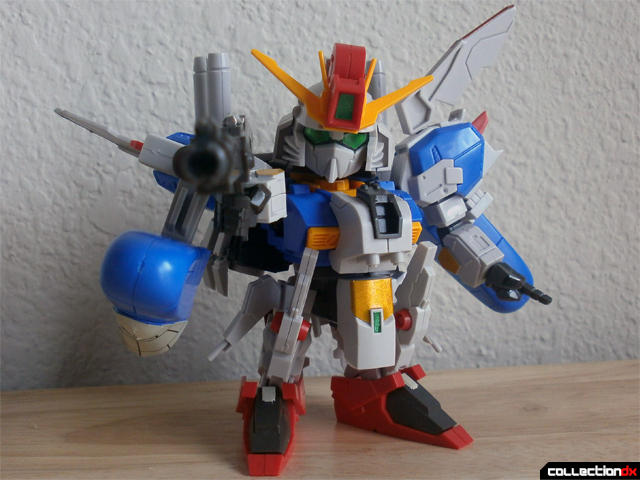 Last up is the Beam Smart Gun, but that has its problems too. The gun itself isn't too bad, but the model just can't hold it properly. There's very few angles where the Ex-S looks good wielding its signature weapon, which shouldn't be the case.

I would like to wrap up this review with what I think the core issue of this Ex-S Gundoom is. I'm a big fan of SD kits, I've built dozens. They're tiny and not super articulated; but fun, easy to build, and loaded with all sorts of neat gimmicks. The Gundoom was a nightmare to construct, its only gimmick is the LED that failed to work, and it trades play value for articulation (that it doesn't need or can't use). This has been an experience I would not wish on my worst enemy, and I would strongly advise that neither you nor any of your loved ones ever buy one of these.

Whoa... when I saw "SD and EX-S" I didn't think it spell SUX. Such a shame. I love that machine too!

The fitting looks really bad. I was thinking of getting the booster variant of this kit(deep striker was it?) but I changed my mind.

I love the variant hands though especially the pointing one.