All cards on the table, the Zaku II is one of my favorite mecha designs.  I have many, many forms of Zaku between model kits and action figures.  Part of me likes the variety, but part of me was always looking for the single ‘best’ and most fun to play with rendition of the design.  Finally, that figure has arrived. 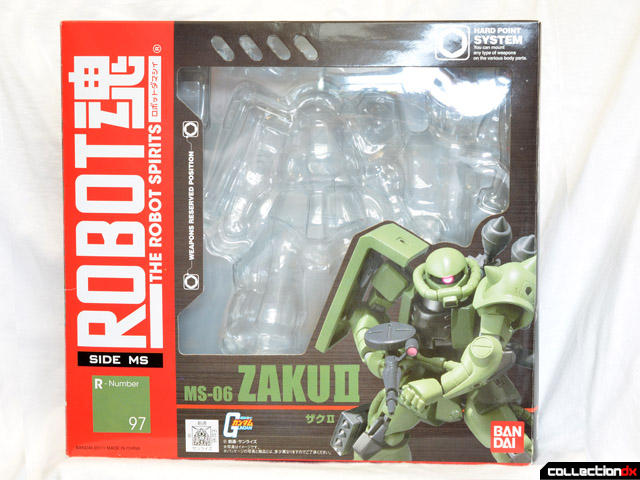 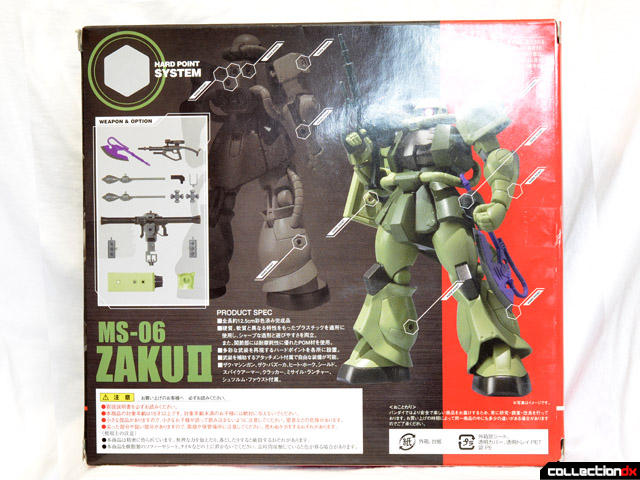 The Zaku II Hardpoint was my first Robot Damashii figure, and if the rest of the line is this good, then Bandai is really on to something here.  The box shows off the basics of the figure, but does a poor job of hinting at what fun really lies within. 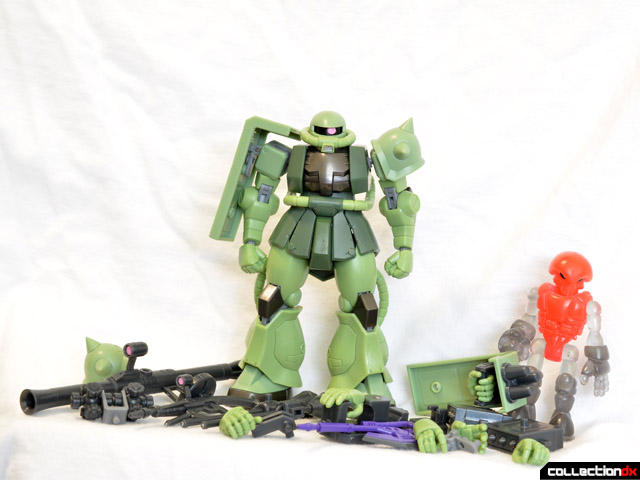 The RD Zaku stands about five inches tall, putting it around 1/144 scale, even though it is not listed as such.  I didn’t have a High Grade kit to compare to, but I would suspect they are about the same height, although the RD is probably a bit chunkier.  Wraith Pheyden gives you an idea of size, and you can see the wealth of accessories included in the box.  Included are: 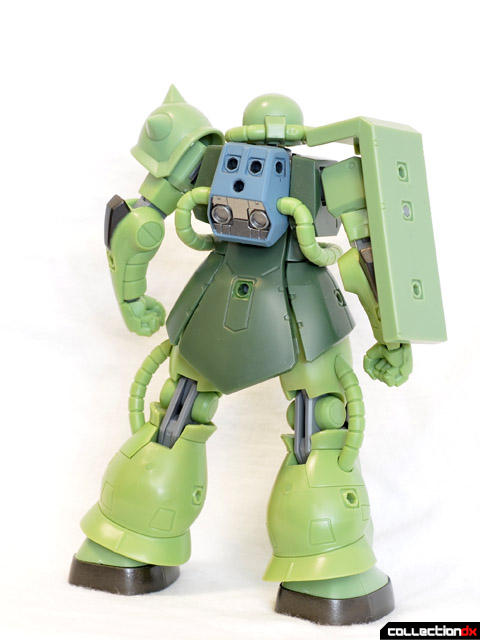 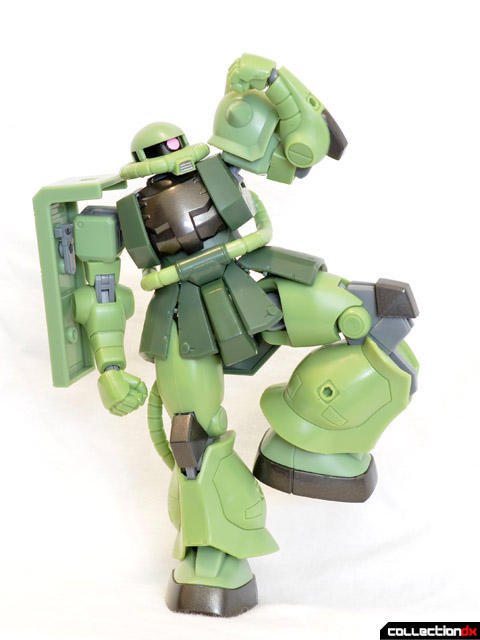 OK, wow, so there’s a lot in the box.  Fortunately, the Zaku II on its own is an incredible figure.  Made of sturdy hard plastic with PVC reserved for the hands and cables, the Zaku has a nice weight in-hand and is incredibly posable.  All of the joints are nice and tight, and the Zaku can do pretty much anything. 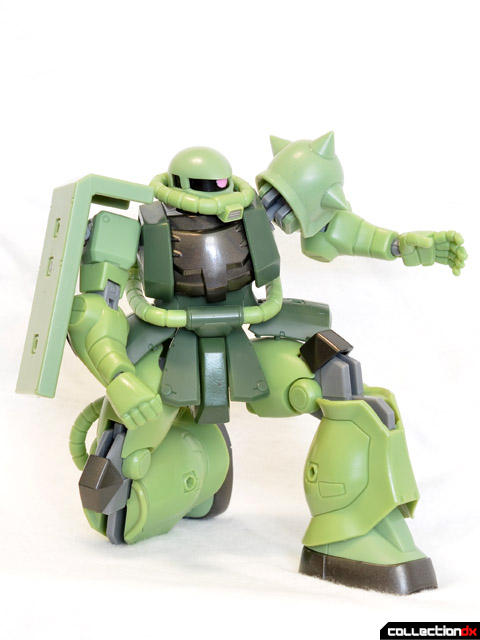 It can even kneel! 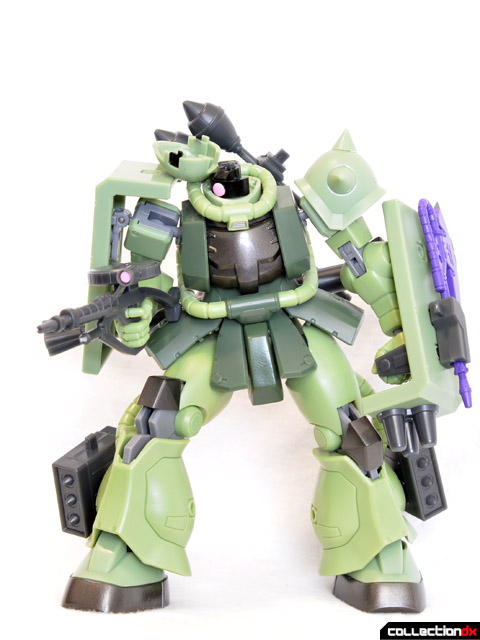 The head armor comes off to allow for mono-eye movement.  Always important. 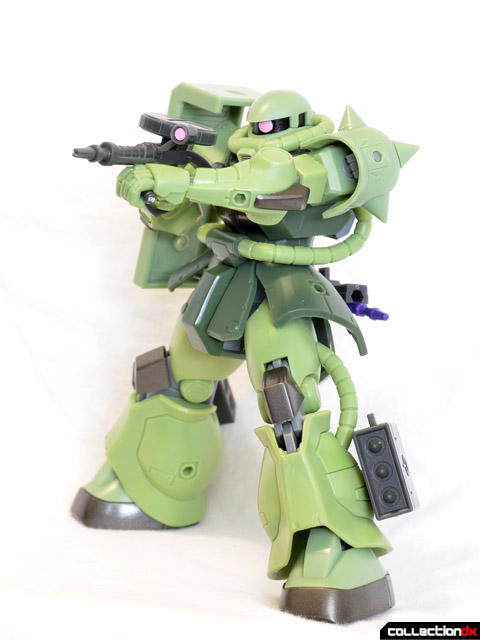 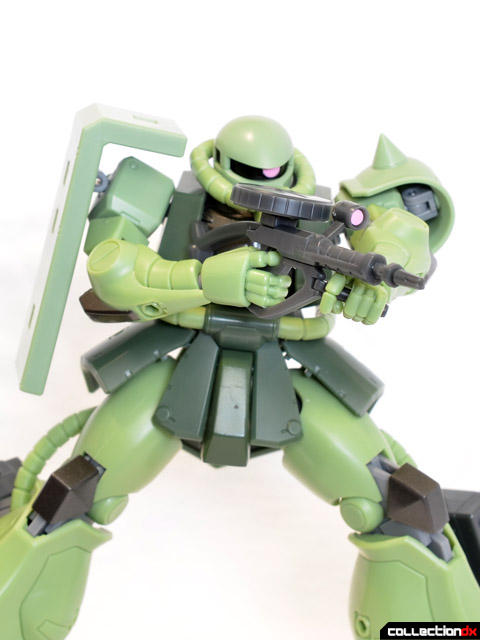 Thanks to its incredible articulation, the RD Zaku looks fantastic with its weapons.  Here’s the classic Zaku machine gun… 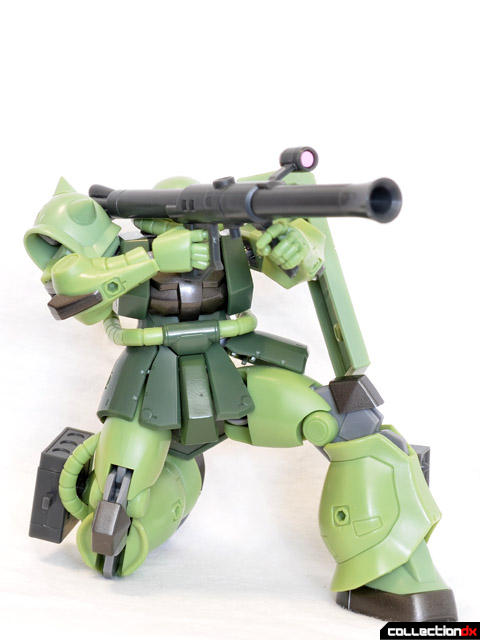 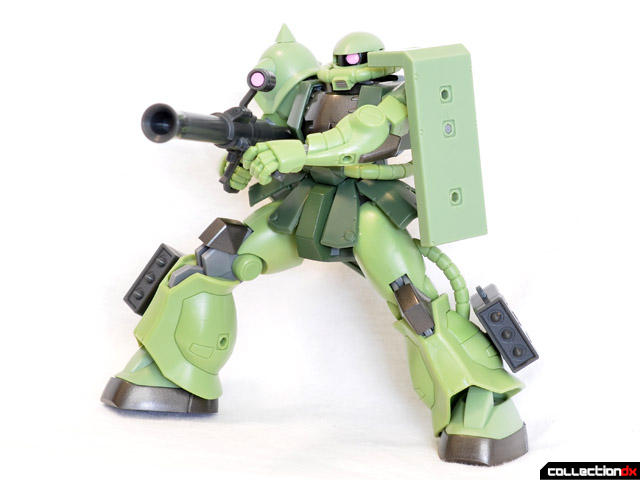 …and here’s the bazooka.  Both feature movable handles for that two-handed action Gundam made popular on mecha weapons. 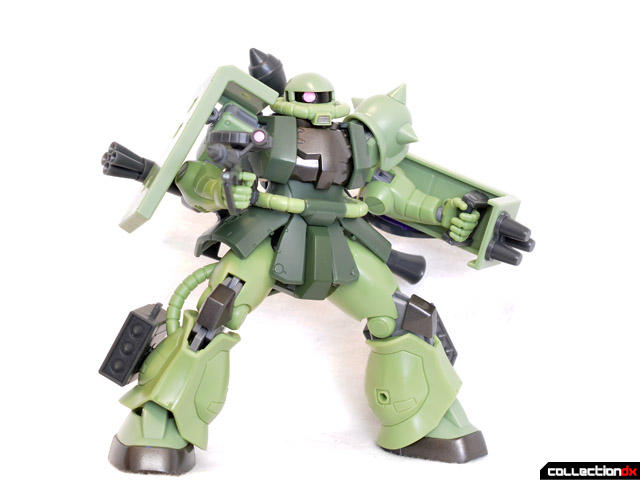 Being a ‘Hardpoint’ release means that the Zaku and its accessories are covered in universal mounting points that allow for a great deal of customization and play value.  The pegs are a decent size and length without looking conspicuous, and hold most of the parts securely in place.  One or two of the holes, like on the calves, are a bit shallow due to the contour of the area. 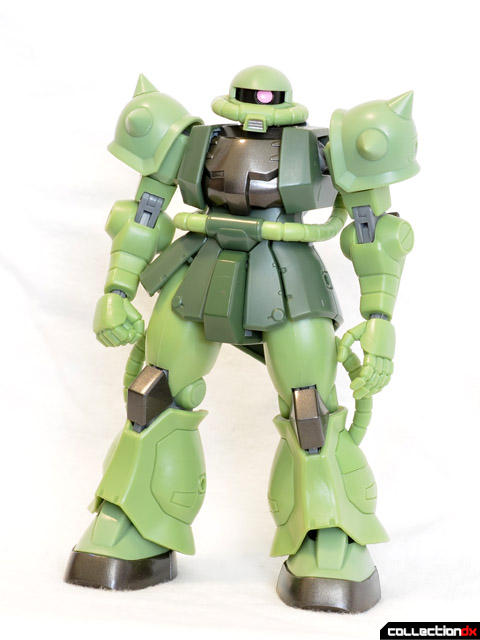 I have always loved the asymmetry of the Zaku’s shoulder armor, being designed for function over looks.  Due to the inclusion of all the extra parts, however, we can make a two-spike or two-shield Zaku, and I can already imagine in-universe functions for both.  With two shoulder-spikes the Zaku looks like a precursor to the Gouf, and I can see this variant ready for close combat. 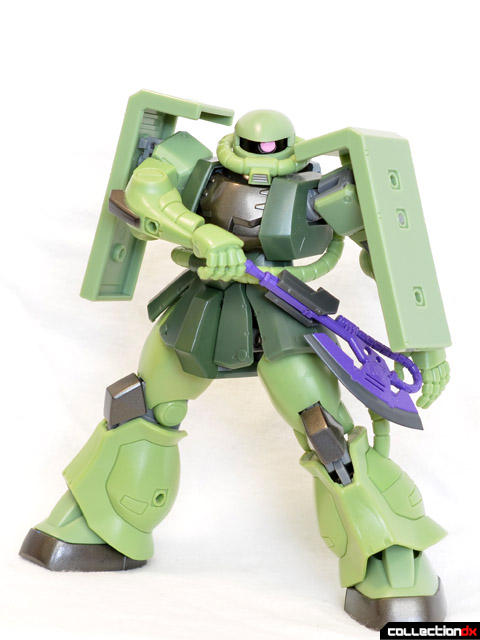 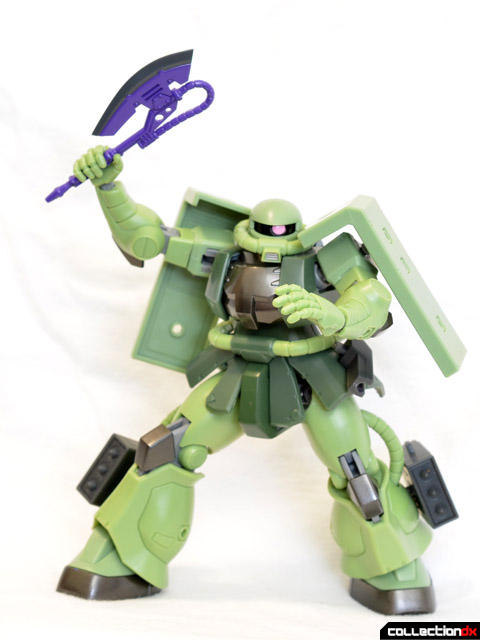 Two shields make the Zaku look a bit samurai-like, heavily armored and scuttling around the battlefield. 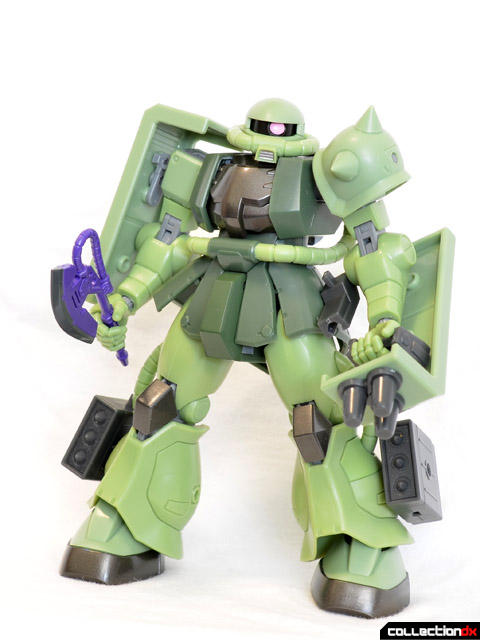 I think my new favorite setup, however, is one shield, one spike-shoulder, and the close-combat handheld shield with the breaching spikes.  This is a Zaku ready to mess you up. 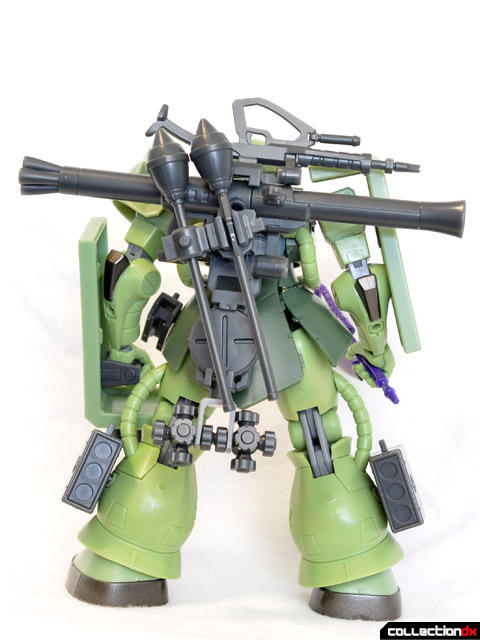 The big mounting plate makes for some really neat setups.  It is possible to mount just about all of the gear on that plate, and then mount the plate on the backpack, for a fully loaded Zeke. 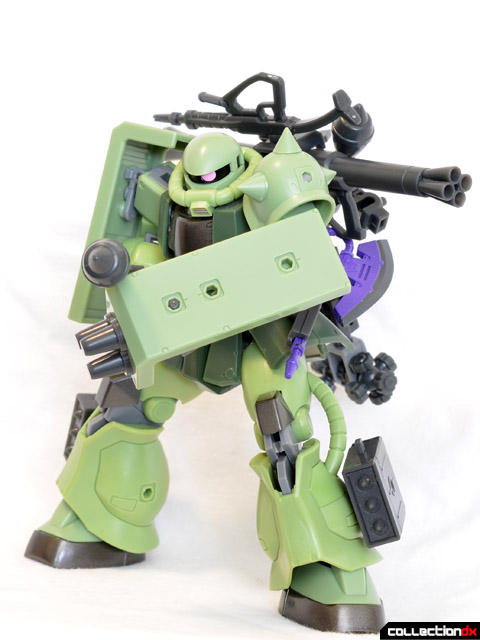 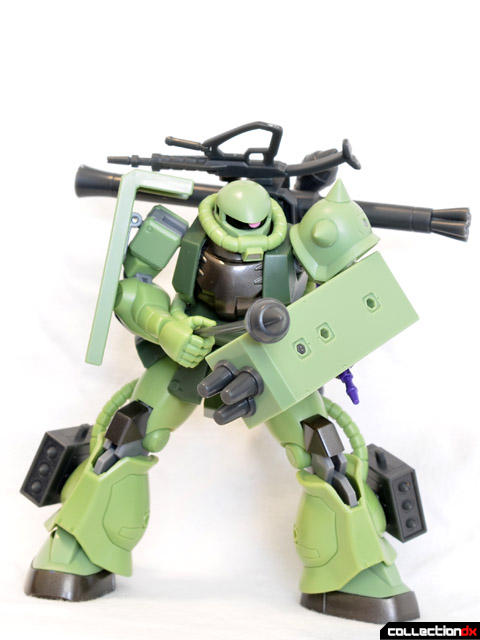 War is hell when you have to schlep around this much gear. 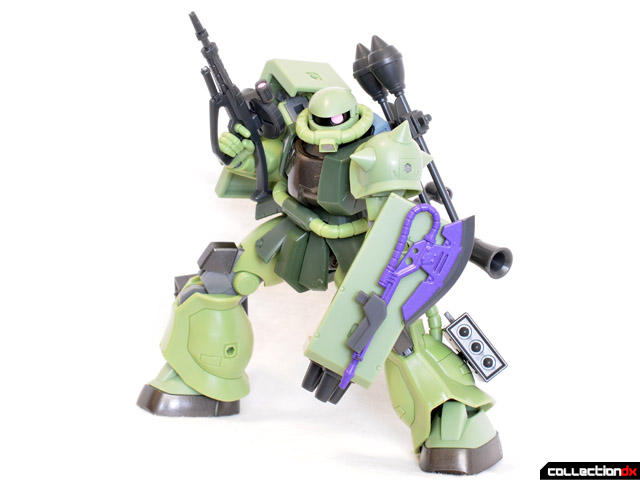 This figure is a blast, and part of what I love about it is that everyone who gets one is going to find a slightly different setup that they prefer.  I already want to grab a second for some more variation.  After messing with model kits and the EMSIA versions, I am pleased to say that we finally have a ‘perfect’ Zaku II from Bandai.

13 comments posted
I always forget that we got a

I always forget that we got a Zaku in this toyline. I really need to get one of these for my own Zaku collection as well. This thing is so ridiculous and I love it. Awesome review.

In spite of some of the wilder 0079 Zeon designs like the Acguy and Gaw, the Zaku has always been one of my least favorite of the staple MSs (with the exception of perhaps the Zaku III and the ZAKU Warrior/Phantom from "SEED"). It took me a while to warm up to the Dom, but I liked the Gelgoog and Z'Gok more.

With that said, I'm impressed that you can pack all the accessories on like this and retain such excellent articulation for a pre-assembled and -painted figure (toy?) that costs less than $50!

Forgive my ignorance, please, but what are those small universal joint-looking accessories hanging from the back of its skirt armor? Grenades?

Yes, they're a type of grenade, if I recall right they're called "Cracker" grenades. I think they have several explosive devices around a central hub; when thrown, the explosives fly off the hub in all directions.

That looks like an awesome figure, and just goes to prove - for mecha fans, you can never have too many guns!

Ohh... so THAT's what a Cracker looks like! I've been playing SD Gundam Capsule Fighter (NA) for almost two months, and I haven't been able to find a picture of them.

Hmm... that's happening a bit too much for my tastes these days. Can't get to Kumby.com either, and that really pisses me off now that I've started watching "Gundam OO".

I just want to point out for Ben's sanity that he put all of the accessories into a bulleted list right under the third picture.

This particular figure of the Zaku II seems to be going for a more anime accurate look then the Zaku usually gets through various model kits and what not. While I don't think it's as good the more modern look, I am glad to see that Bandai's at least putting it out there so we no longer have to rely on an old high grade kit if we want that look. That aside, the articulation on this thing looks amazing, and it has all the Zaku accessories, something that's rather rare. I think you just convinced me to go out there and buy this thing.

*Sigh* They always keep finding ways to make me buy more Zakus. I'm happy with the Zauks I have! Until I see something like this. Fantastic. Another Zaku it is. You win, Bandai.

Wow ! He comes with enough weapons to take out a small army of GMs... only to be obliterated by the RX-78.

I've never been able to 'get-into' the Gundam aesthetic, but that's one cool toy you've got there. I might have to investigate...

Since I acquire the Magella-Attack of a limited sale, while it is near, I show Zaku Tank.