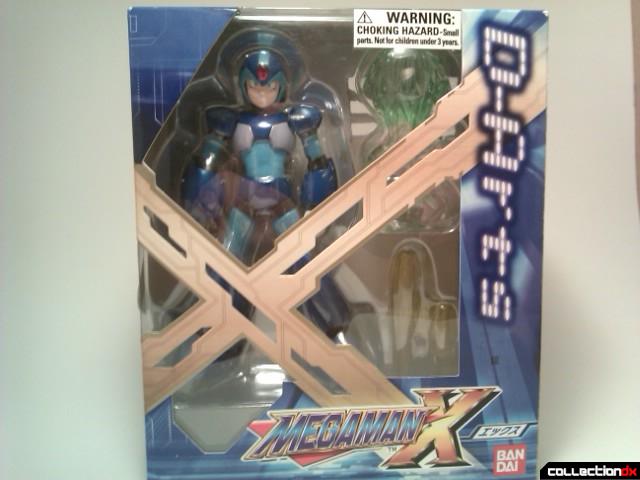 I grew up with playing Megaman X, and remember it being one of the biggest video game influences of my young life. X’s adventures on the Super Nintendo, and later the PlayStation, captivated me as a child nerd. I longed to be able to play with Megaman X in the real world in toy form. When Jazzwares came out with their Megaman figures several years back, I thought my Megaman action figure appetite had been satiated. That is, until I saw D-Arts Megaman X. 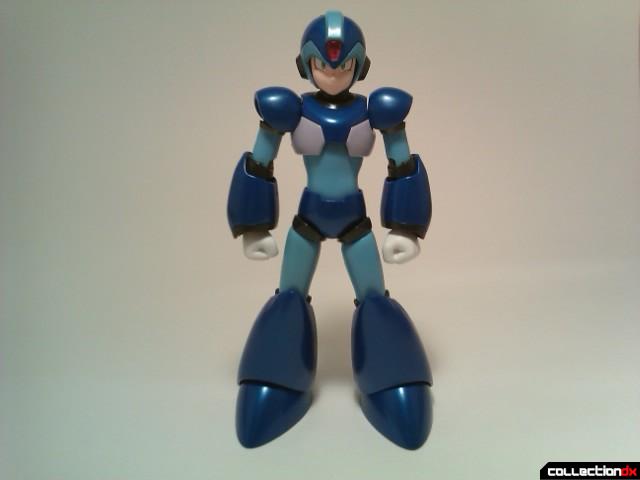 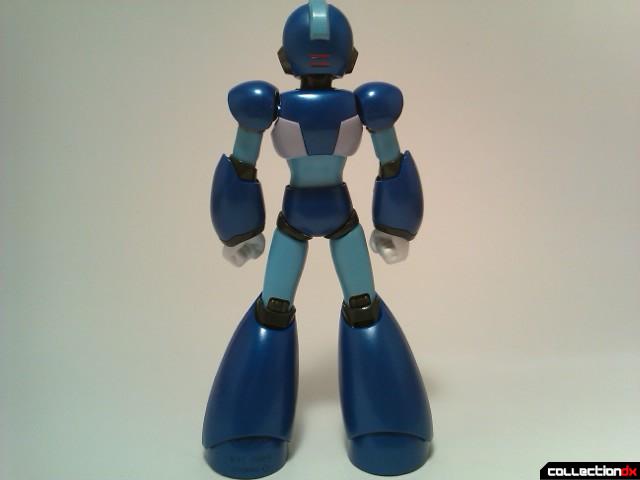 D-Arts is a branch off of Bandai’s S.H. Figuarts line, much like Ultra Act and MonsterArts. Since this figure was designed using the same standards, it is no surprise that it is one of the best Megaman toys I have ever seen. The colors are spot on, and there isn’t a single detail lost in the translation to an action figure. They even added the red gems on the bottom of X’s feet. That attention to detail is stunning. 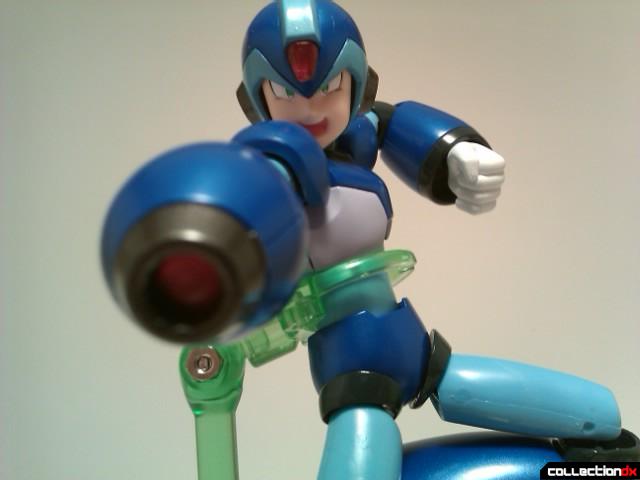 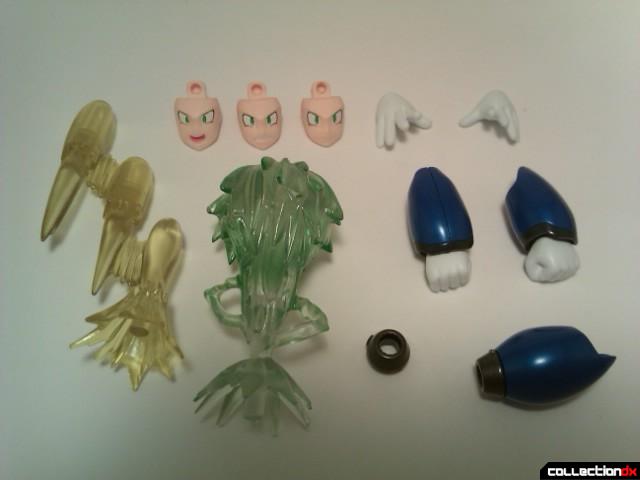 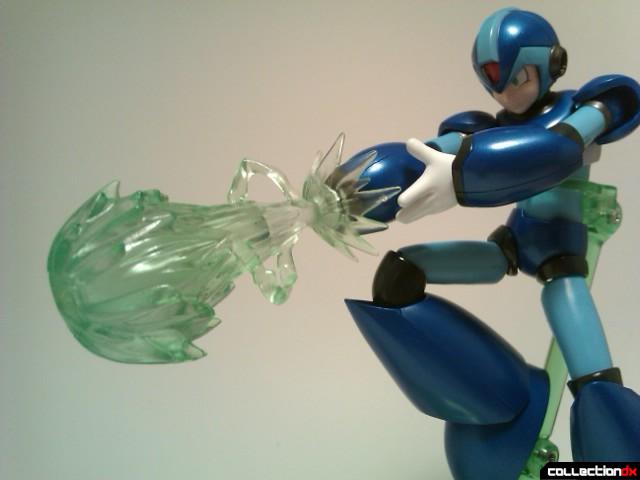 His accessory count is really nice, as he comes with two sets of hands (fists and splayed), his X-Buster, three faces (calm, angry, and yelling), and two effect parts. The effect parts are energy blasts that X fires from his Buster gun, and include one charge shot, and a rapid-fire effect part. The rapid-fire part is actually articulated so you can pose X in a variety of poses and the blasts will fit. The fists snap on and off very efficiently, and I have had no trouble popping others on or removing them. The face is rather difficult to change due to the slickness of X’s head, but once you pry it open the first time it is fairly straightforward. There are two different barrels for the X-Buster: one that is open to allow effect parts to snap in, and another that has a red gem inside. 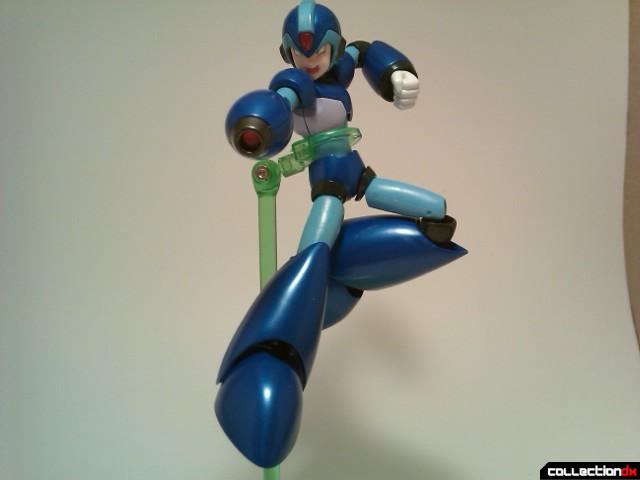 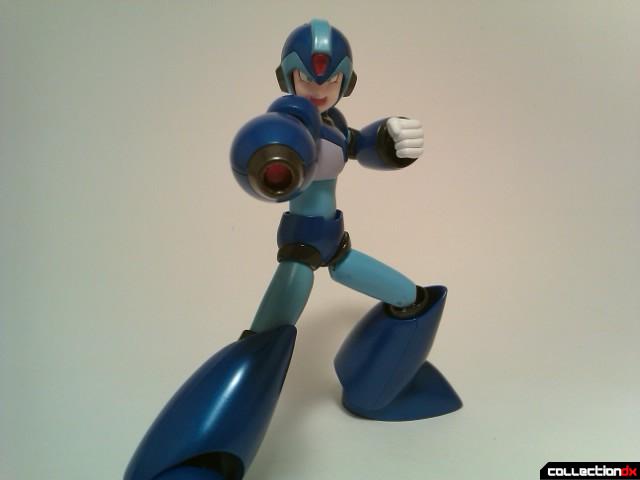 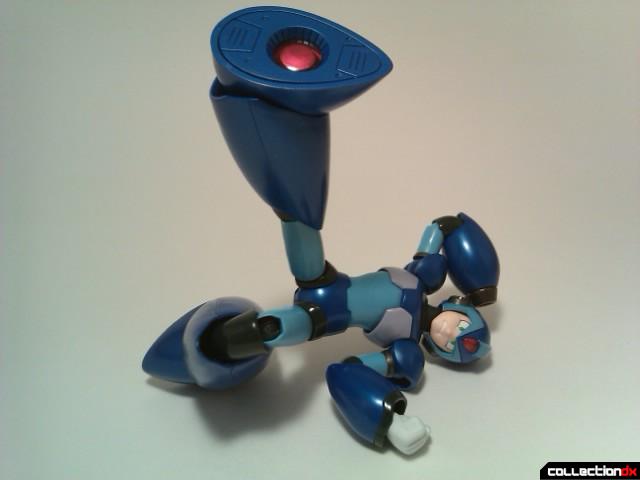 The articulation is one of this figure’s biggest selling points. He has a ball-jointed head, triple-swiveling shoulders, bicep swivels, double elbow joints, chest articulation, a ball-jointed waist, ball-jointed wrists, double-swiveling hips, double-jointed knees, and this odd foot articulation that seems to be a ball attached to three swivels. The articulation feels very unrestrained and the figure is a joy to pose. My only gripe is the fact that it has an armor change gimmick that will allow it to switch body parts with other Megaman X figures to simulate the armor collection system in the games. You can remove the lower legs and forearms completely and switch them around. This makes these parts a bit finicky, and an arm or leg can fall off while posing if you’re not careful. I should note, however, that it is incredibly easy to snap the pieces back together. 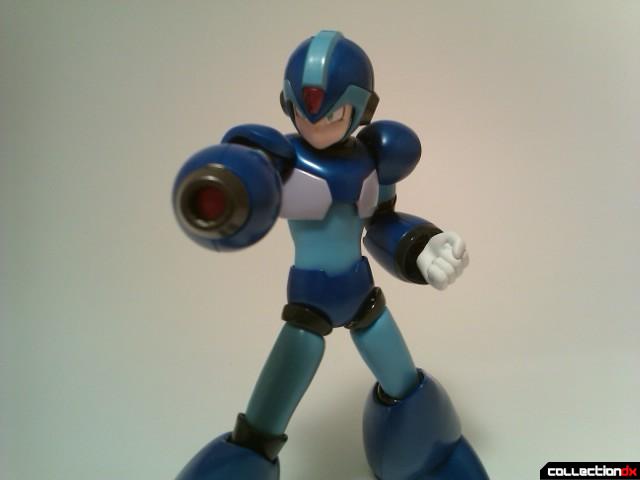 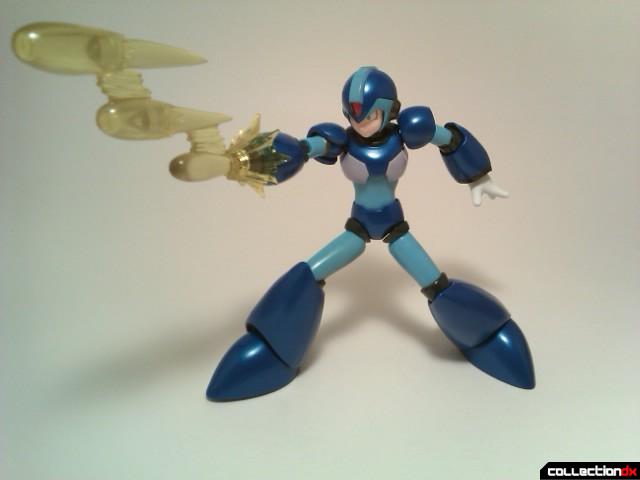 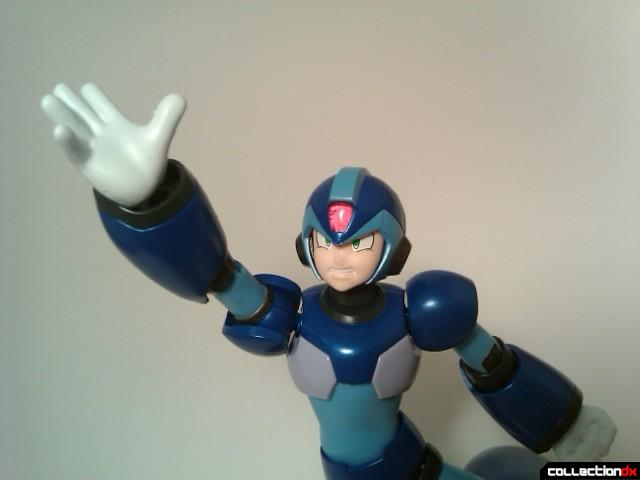 D-Arts Megaman X is definitely something to keep an eye out for. It is actually branded as “Megaman X” because it is the English version of the Japanese D-Arts Rockman X. This localization means that you can actually find it very easily at anime conventions and specialty toy stores. It is very affordable, and I highly recommend it to any Megaman X fan. 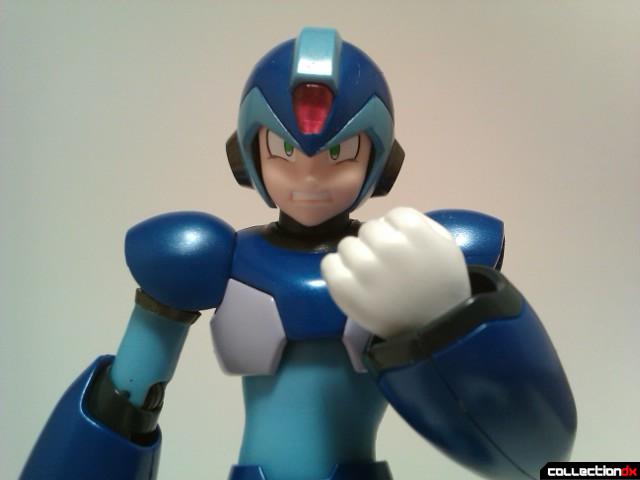 16 comments posted
As a Megaman fan, I find the

As a Megaman fan, I find the first Megaman X to be the best game I've ever played. I was really happy when Bandai announced this figure and even more when they announced the Full Armor version.

I have yet to put my hands in one of these, but it really seems like a nice figure, the way the joints were covered was pretty good and the buster shot gimmick may add some fun to posing. Also, the design seems spot on when compared to the first kits released in the 90s and the Jazwares toys.

Awesome review and pics there. I love the dynamic poses you managed to pull off with this guy, i've always wanted a Megaman figure and this one seemed to be perfect for my collected, i might even go as far as to say he's the toy on my shelf that i find myself playing with the most every other day. I thought it also might be worth noting that shortly after the PSP first launched, "Megaman X mavrick hunter" was released as a redesign of the original Megaman X game with better graphics and an anime Megaman X movie once you beat the game, very enjoyable for hardcore Megaman fans.

Thanks a lot! That was one of the first PSP games I grabbed when I got mine. It was AMAZING! I was also a fan of Megaman: Powered UP!

Any chance you might do a review for D-art Zero as well? i never got one myself, was a bit let down when i heard he doesn't come his Z saber. But then i heard that Kotobukiya released a figure of him based on the Megaman Zero series, pictures of it looked pretty cool.

I don't have that figure yet. In fact, I was going to wait until they did a version with the Z-Saber and square shoulder pads. But I'll think about getting one, especially if there's some interest in seeing how good of a figure he is.

I've always liked the visual style of the Megaman characters and figures, but sadly I never played any of the games so I don't know anything about it.

That being said, nice figure! And a good review as well.

EVA_unit_4A, if you own a PSP, then i would say that "Megaman Mavrick hunter X" is a MUST have game, though it might be a little challenging until you find his power boots (which i think were a given in the original version right at the start of the game). Otherwise, if you own a PS2, they released all the Megaman X series on one disc.

Jman, be sure to check out the Kotobukiya Zero figure (link below) it's based on the Megaman Zero series and does indeed come with a Z-saber. The design is somewhat different though. But i would still love to hear your take on it since I'm looking for the perfect Zero figure to go with my Megaman.

The reason I never played any of those games is because I never owned a console system. It's been PC all the way for me, even though numerous times I have wanted a console. And to be honest, though I still would like to play SOME console games, I know how addictive it would be for me, and that playing only two-or-three games per console version would be rather non-cost effective in the long run, I am begrudgingly thankful to my parents for having kept that away from me in my youth.

Not too good of an excuse. There are emulators out there for the PC. so you can enjoy some previous generation games.

Consoles are expensive but if you use them for their other features then the cost is a bit more justifiable.

Great review, sir! I just got this myself and I friggin' LOVE it. My only good X figures were previously from the Bandai model figure series from years ago, and this blows 'em away. I wanted to review the figure somehow, but I dunno where to do it, honestly. You covered everything though, so this does the same thing! I'm eagerly awaiting Zero, and I'm gona get him (and Armored X) ASAP. I am crossing my fingers for the next release to be Vile.

As for Jazwares...well, I don't know how anyone could have considered those things as good figures. Ugliest sculpting I've ever seen. I believe Jazwares is wanting to go back to Mega Man, and I hope they do, because thier current Sonic The Hedgehog line is spectacular, and I believe they've learned a lot since the Mega Man days.

Thank you very much, sir!

I considered the Jazzwares figures "good" figures only because they were the only things I could get my hands on! Hah. I actually have my D-Arts propped up next to my old Jazzwares X. It brings back memories! But in actuality, the old 10 inch figures were pretty good. The articulation lacked a bit, but the characters were sculpted fairly well.

As for the sonic figures, I was tempted to grab one of the vehicle packs, but passed because the joints looked really.... gross. I may have to go back and grab one of the larger figures since the joints don't look so.... knobby. I was kinda eyeing that "Super" three-pack at Toys R Us, though.

I highly suggest the Super Pack! Great set, and one of my favorites....though of course, it does sort of make you want the regular versions as well, and I ended up buying Shadow and Silver just for that purpose (though I didn't know anything about them at the time). Now is the best time to be buying them, though, 'cause the current wave of figures has both new age and classic versions of Sonic, Tails, and Super Sonic (and there's a FANTASTIC set at TRU with a classic Robotnik and two Eggrobos from Sonic & Knuckles). The classic styled ones have less articulation, but aren't any less fun. On top of that, pretty much all the main guys are single packed at the moment, so you can get them easily without having to buy two packs or any of that jazz.

Nice review. Would be totally sweet if you could append a photo of the figure next to the older X figure(s). Doesn't the charged shot part cause the arm to sag?

I keep thinking the upcoming Zero figure is a jerk move from Bandai. Who the heck wants the vanilla version of Zero with round shoulders and no Z-Saber?

Thank you very much! I'll see what I can do about the picture next to the older figures. Those things were pretty ugly, so it might cause the site to crash ;)

But as far as the charge shot, I haven't had a sagging problem. It's definitely heavy and he tends to tip over, but having a wide stance or having him on a stand solves that problem completely.

Nice review. How long have you had your D-Arts Megaman X? I got mine not long after release and I really enjoy the attention to detail. Just last week I had his right arm break where the bicep meets the shoulder, so that was a bummer. I guess after handling this and the D-Arts Zero I kind of feel like the plastic is more fragile than I'd like for a figure with this much articulation. Also, just a warning for those that might get the MMX1 Zero figure. Be gentle with his hair because it will snap off in your hand like a toothpick!

I'm sorry to hear that. I've had mine for a couple of weeks, and I've been playing with him like crazy! If I get the Zero figure I'll make sure to cradle him. But my X still seems as solid as two rocks...