For a lot of gamers, the biggest change that came from the transition of Mega Man to the X series is the armor upgrade syytem. Sure, in some of the later MM games, you could use a power up from Rush or something similar, but those are more like additional special weapons, and they even use weapon energy. The armor parts permanently enhance X's abilities and open up more game play options. And there's challenge in that you usually have to find the parts. Though possible to beat most of the games without all the parts, it's always way harder. 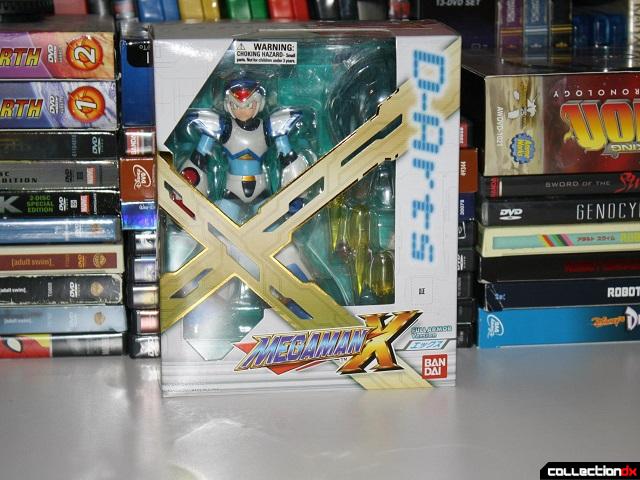 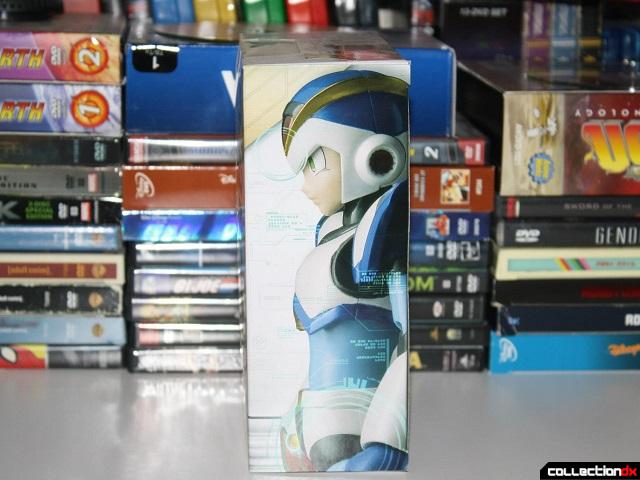 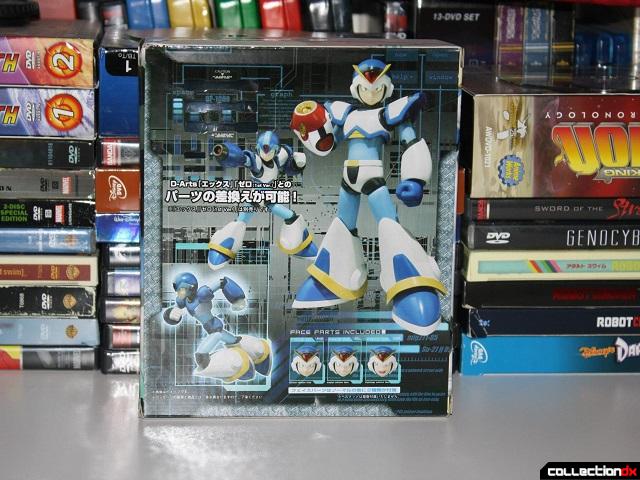 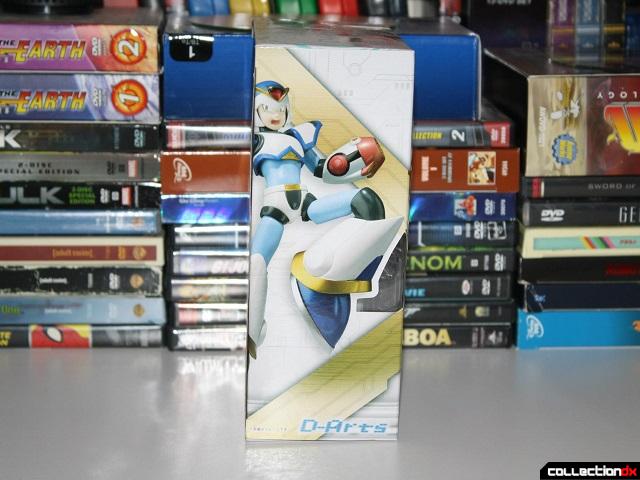 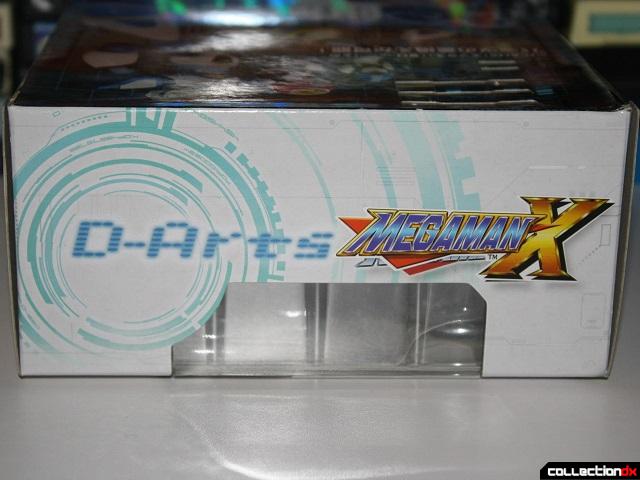 I continue to be impressed by these boxes, and the back demonstrates how you can swap parts between this figure and one of the standard versions of X. 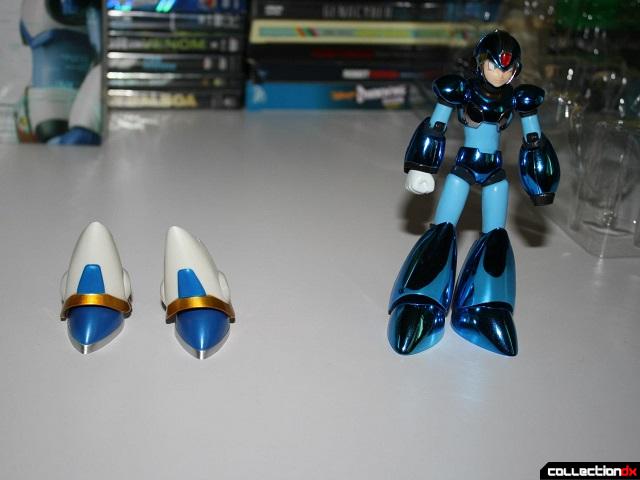 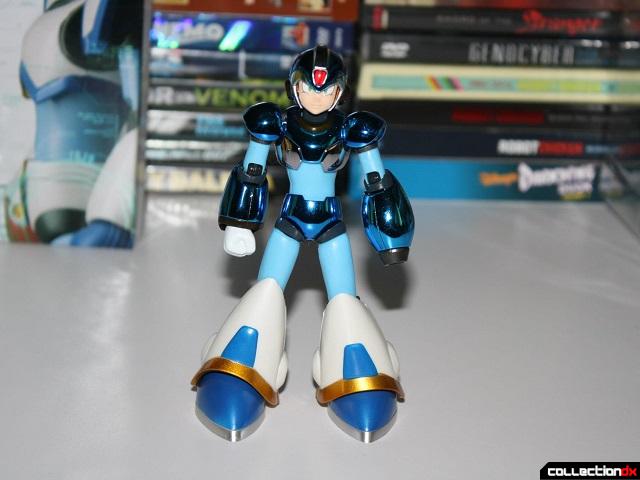 In classic Mega Man fashion, you can tackle the eight main stages of the game in any order you want. Regardless of that order though, you will get the leg armor first, located in Chill Penguin's stage (in the original version at least, not sure about the PSP remake). It's the only part you don't have to hunt down, but you can't get any of the others without it. Once equipped, it gives X the ability to dash and dash-jump, letting him move faster and reach some previously unreachable things. 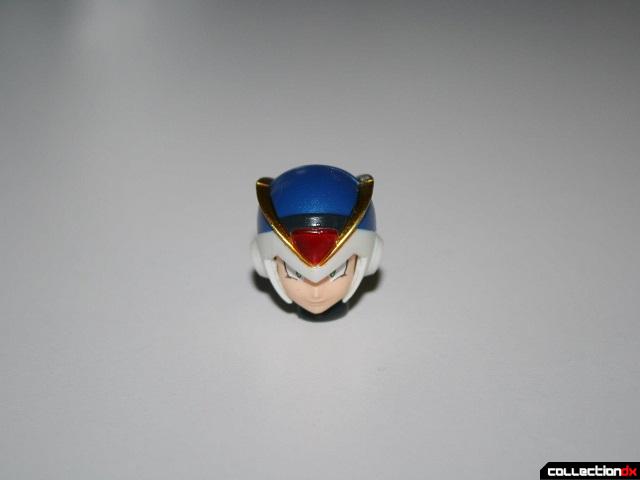 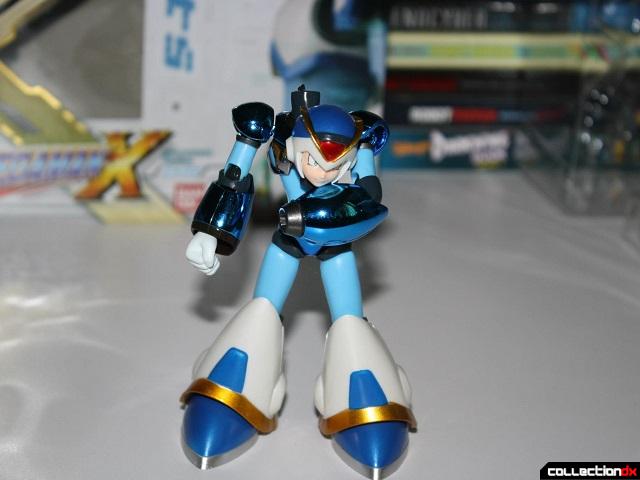 Based on the order I proceed in, the head armor comes up next. It's in Storm Eagle's stage, and you need the leg armor to get to it. I want to say it is weird looking, but that's not right. It's just usually when something gets upgraded, the replacement is grander than the original. Here, X's head gear is just very different. It allows him to break certain types of blocks or walls by head-butting them. Otherwise, it doesn't alter gameplay that much, which is kind of lame. At least it fits with the rest of his look, though.

I would have put the head on, but my standards X's neck isn't easy to remove, so we're going with a headless robot for a moment. And who doesn't like headless robots? The important thing is it fits properly once it's attached. 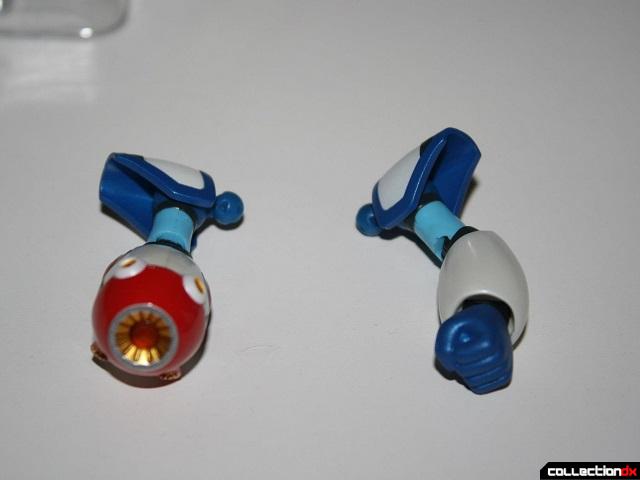 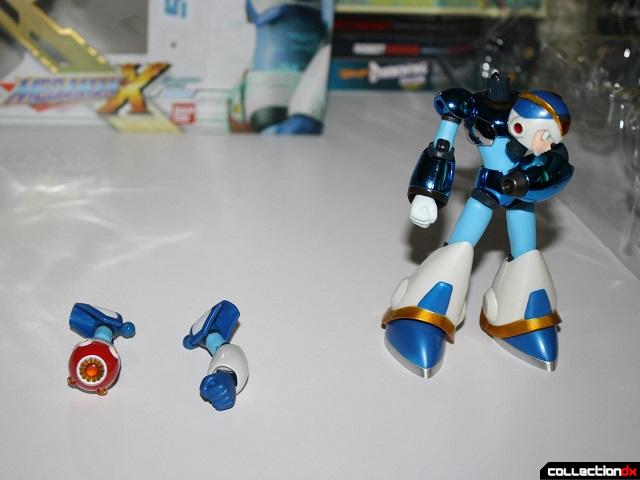 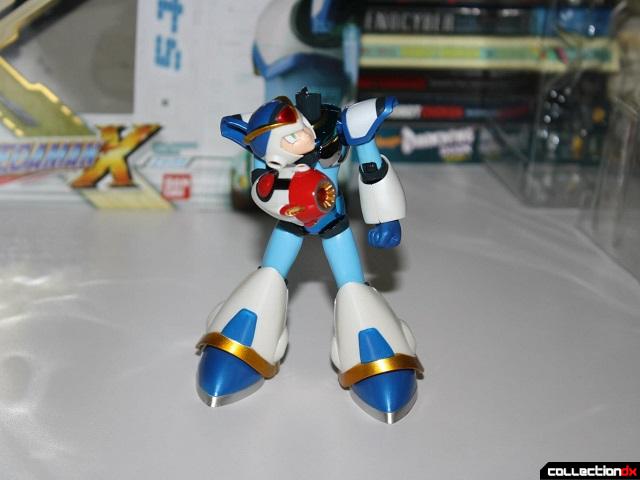 My next stop is Flame Mammoth's stage, where among other things are the arm armor and enhancement for the X-Buster. You need the leg and head armor to get to the capsule, and it's kind of tricky, but definitely worth the effort. It allows X to charge his weapon up to a third power level and charge up all of his special weapons too. With the non-gun forearms, you've just got matching limbs and hands to fit the motif. But the enhanced blaster definitely looks juiced up, like it's a higher caliber of firepower. Also, I wasn't paying attention as I took these pics. The shoulder covers are actually part of the body armor and removable. You can see an accurate pic on the back of the box. 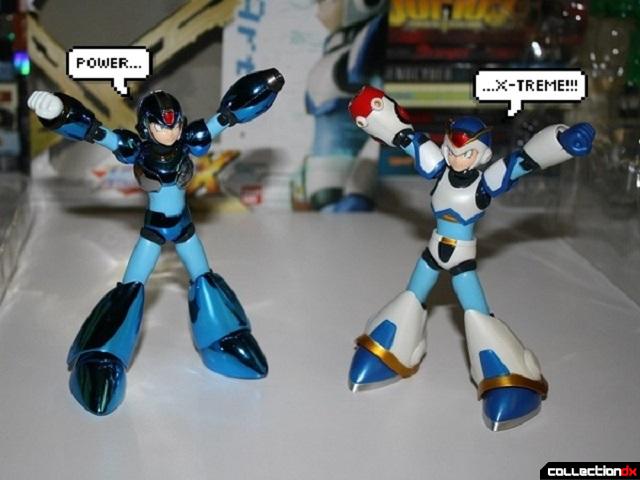 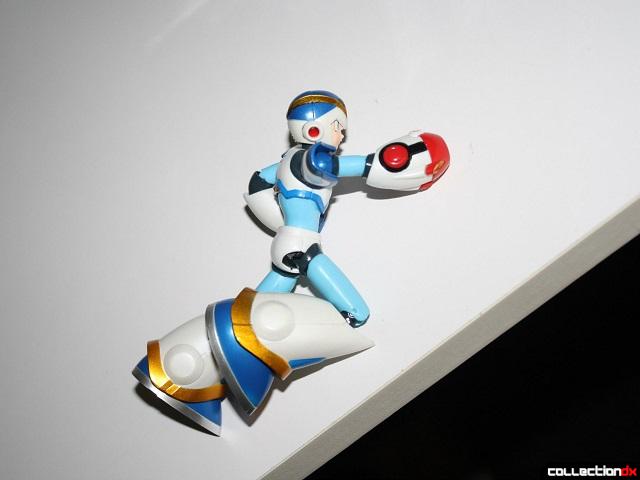 And that brings us to the body armor in Sting Chameleon's stage, the last piece I always collect. You only need the leg armor to get to this capsule, but it may be the hardest to actually access because you have to fight a very durable mini-boss first. Once obtained, it does what you'd imagine armor actually does and reduces damage by about 50%. And it completes the new look. When I look at X in his standard form, I see a body. But with this version (called First Armor because it's the set from the first game), he looks bulkier, as if he's actually wearing armor. He's even a little shorter than the standard version, like he's being weighed down with the extra parts.

He actually is a little heavier than the standard version, but articulation and stability are completely present. Of the three D-Arts figures I've covered so far, he's the stiffest yet, and in a good way. 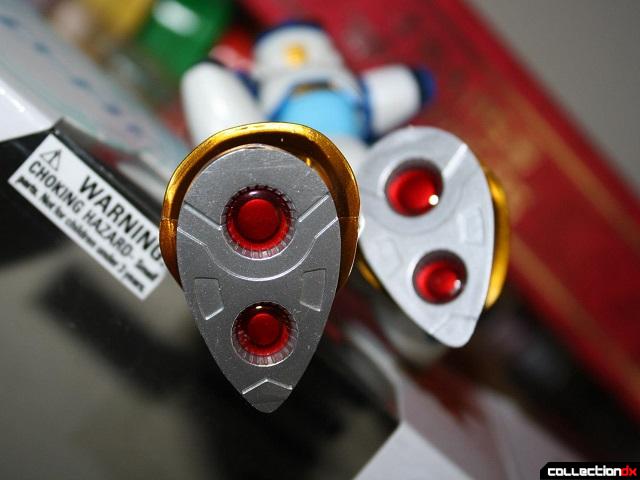 His foot thrusters have doubled, putting him on par with Zero. 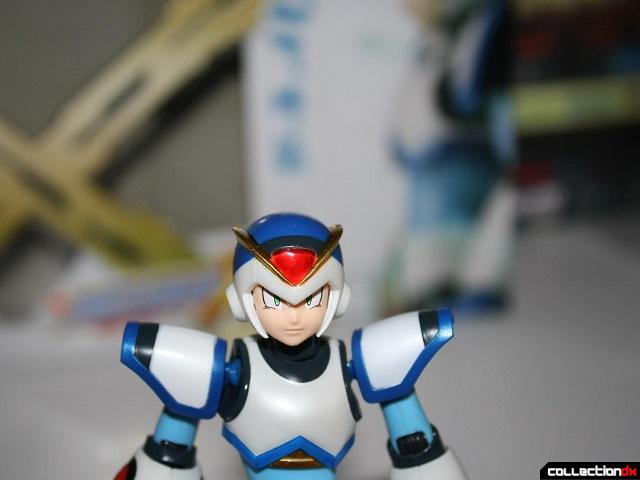 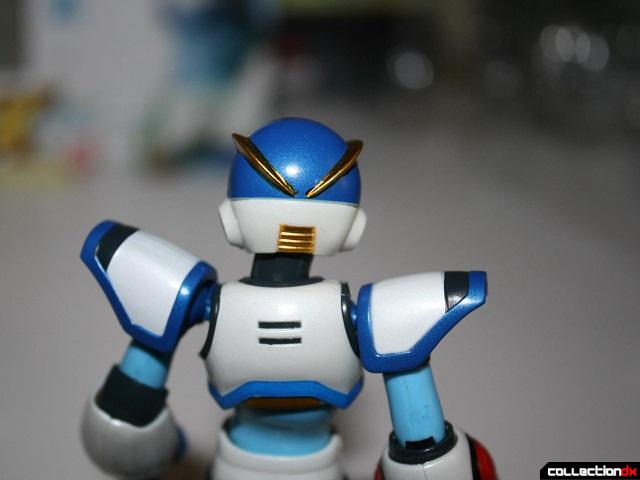 From behind, we can still see the slits on his back. Those and his more inward extremities are the only parts that didn't change. 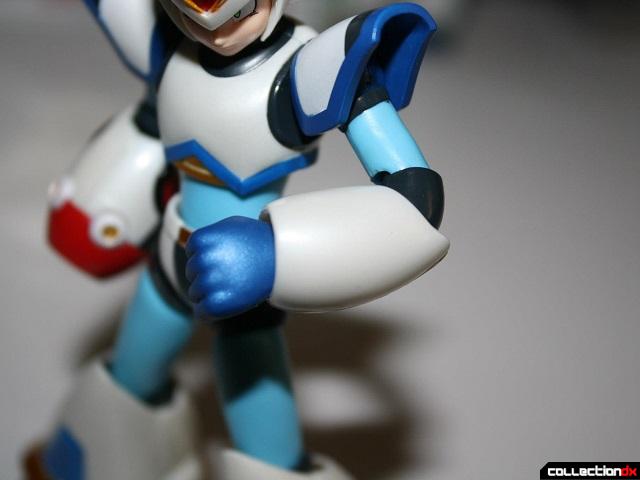 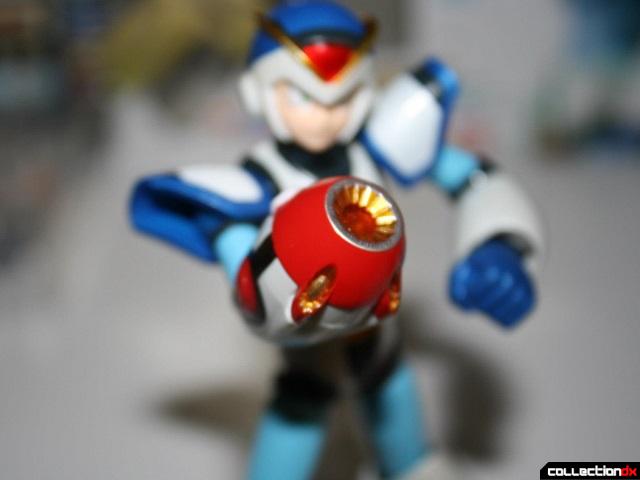 I never mentioned it before, but all these MMX figures come with an extra forearm that allows you to remove the weapon altogether if you'd prefer them with two hands instead of one. 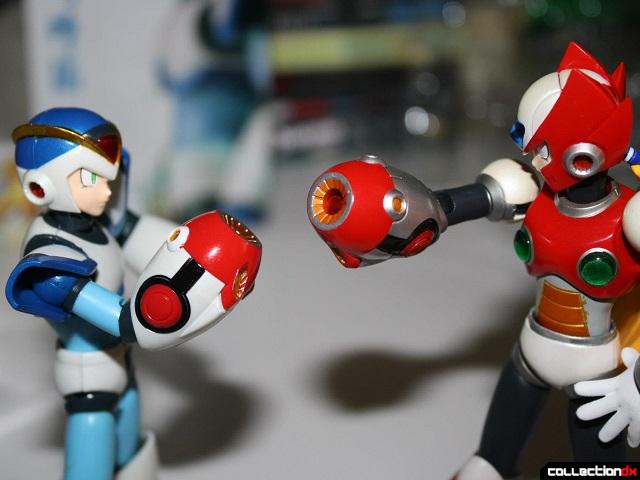 Other than one being white and one being silver, their blasters may actually be the same piece. If the sculpt is different at all, it's in the barrel and it's very minor. 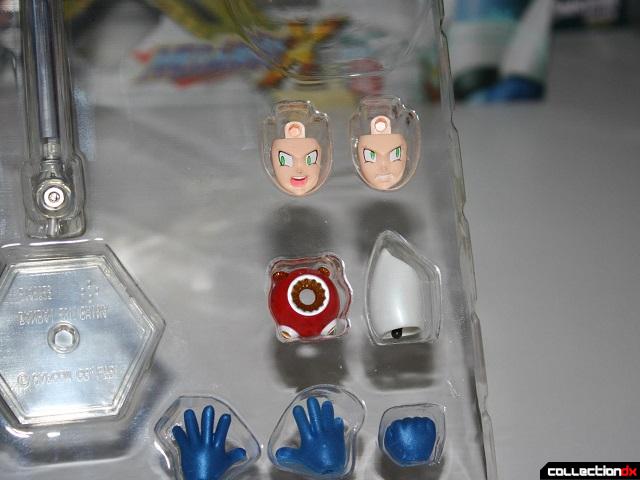 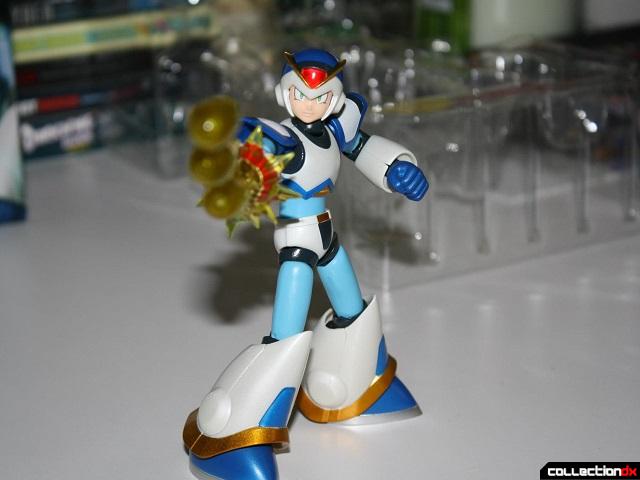 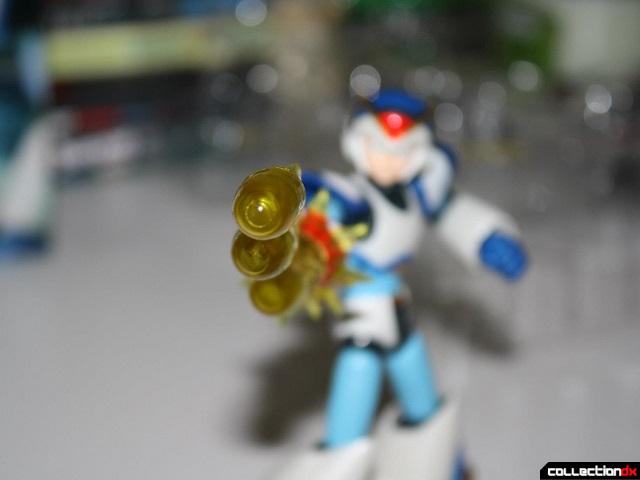 A couple of shot effects are included. One is the trio of yellow blasts. They look similar to the one that came with the standard version of X, but these are a little bit bigger and can actually be separated. Be careful when plugging it into the hollow barrel. At first, mine didn't fit at all. But once I got it in, it was stuck pretty tight. I had to use a nail file to pry the two pieces back apart. 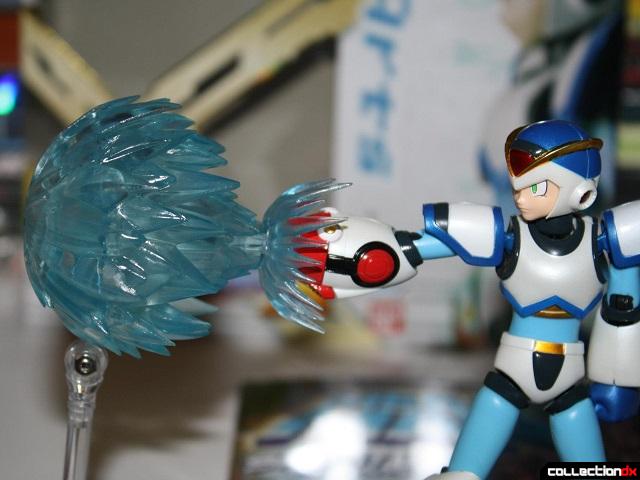 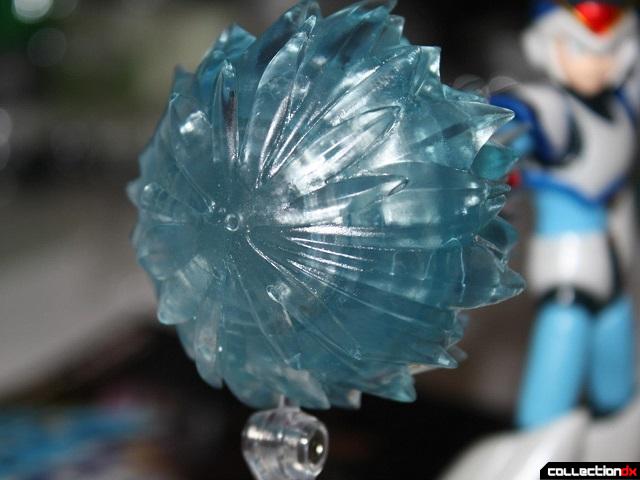 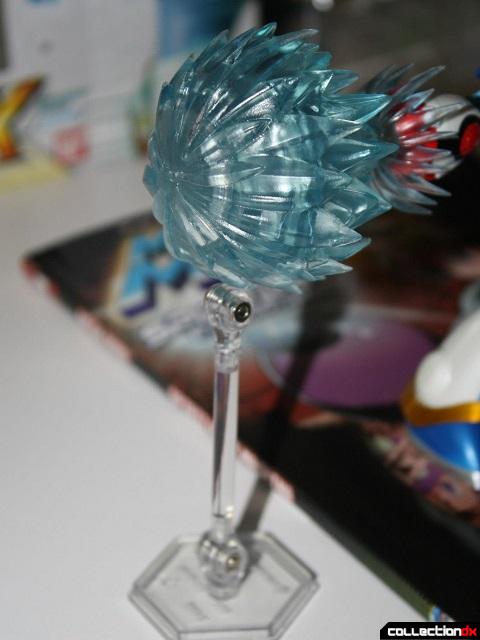 And then there's this monster piece of plastic/rubber. It's a third-level charge shot, the highest you can get without the arm armor. It looks really cool, but is so heavy that it needs the stand to be aimed any higher than the ground. The base, pole, and pegs on both ends make for a total of four pieces. It's definitely great that the pole gets into the shot, but you may have a little trouble finding it. I always need my reading glasses to do so. 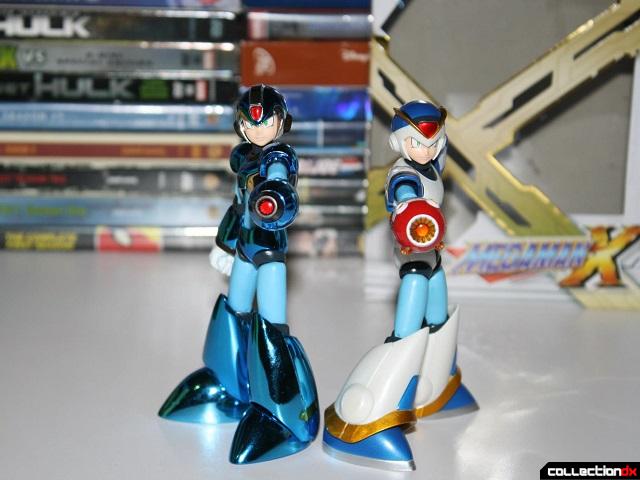 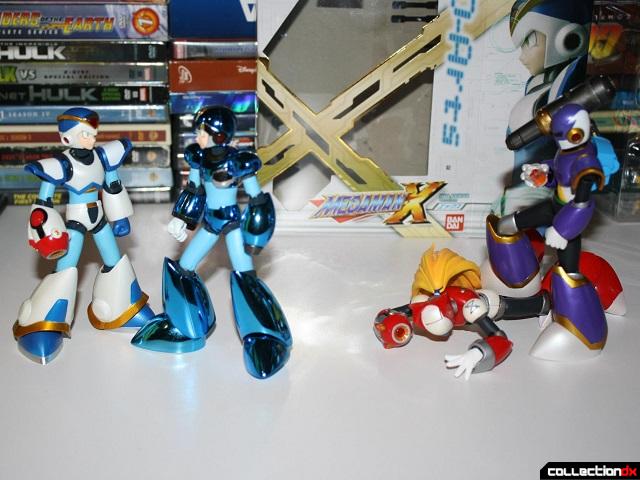 These two would help Zero, but what's the point? If Vile does kill him, he'll back in the next game anyways. 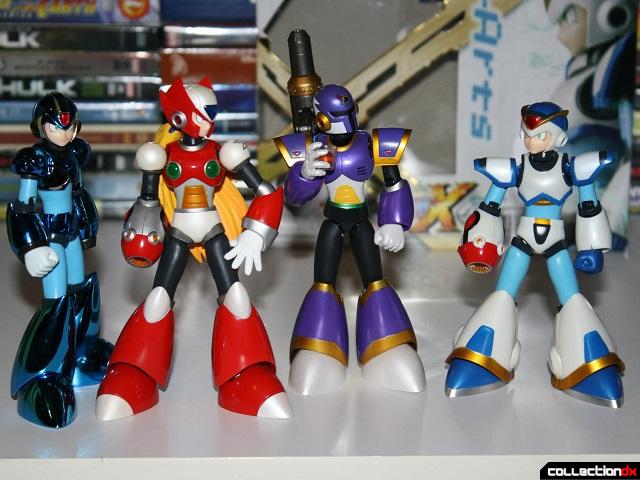 If they all had drinking accessories, this could be King of the Hill in a weird future. 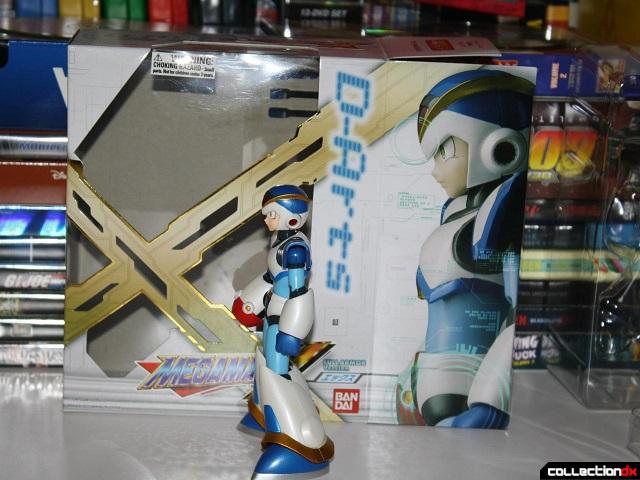 X with the First Armor is on par with his predecessors in terms of quality, so there aren't any issues there. As an avid MMX fan, I think he's a pretty good purchase, but I also got him for less than half the $80+ he runs for now (surprisingly cheaper than the ones without any armor). And while the character looks great with all this armor in game, seeing it physically realized may not be everyone's cup of tea. The helmet in particular kind of throws me, but I'm fine with it. Those who love the games will probably want in on him before his price goes any higher. Anyone with a more passing interest can probably skip him.