The Little Battlers (known in Japan as Danbōru Senki) is a multimedia franchise developed by Level 5 in Japan. Composed of a video game, anime, manga and now model kit line, The Little Battlers is poised to take over. But will it? Is it too… Japanese?

The core idea of the Danbōru Senki video game is that there are these small, cardboard robots that do battle that are controlled via a human’s cell phone. They fight in a little arenas, and you can mix and match parts to create stronger warriors. The catch is that they are made out of some kind of super cardboard, and that of course they have to save the workld or something. Right away this sounds like a mix between Medabots, Angelic layer and Xevoz. 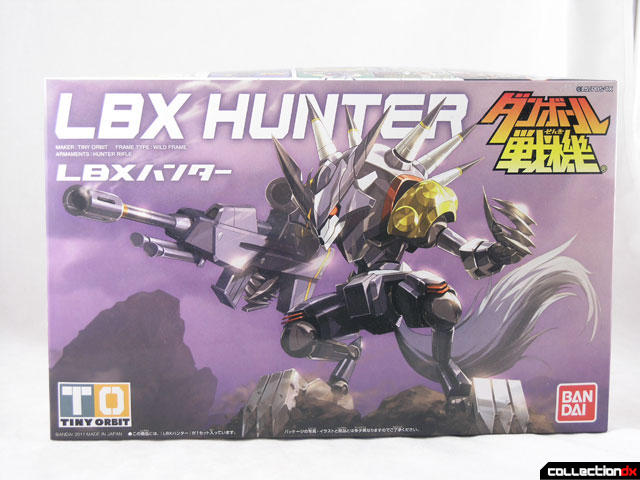 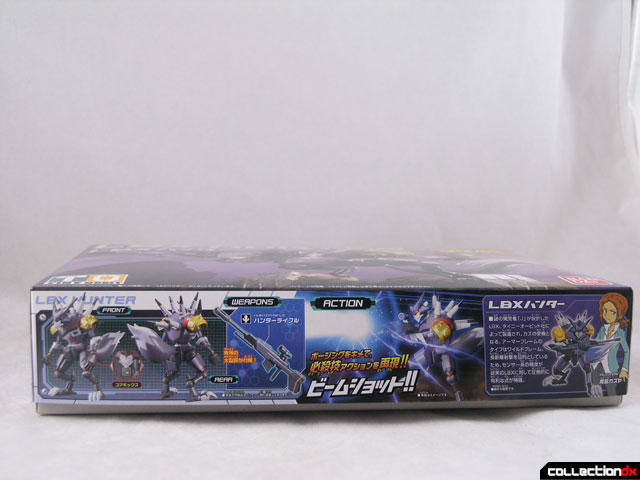 Although cardboard robots are nothing new, these kits are actually made out of injection molded plastic.

Each kit in the LBX series comes in an attractive box that holds several multi-colored sprues of parts. The included instructions are partially in color, and a decal sheet is included. 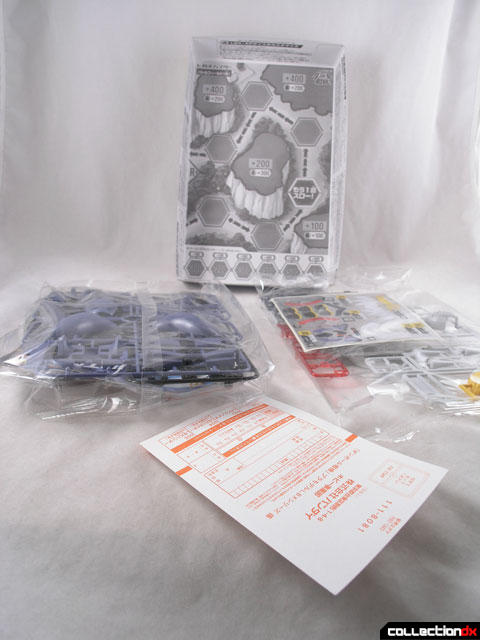 Each sprue is injection molded with several colors and you have to snap off distinct sections related to each body part. For example, instead of having sprue A,B,C etc… you have a sprue with a head icon, body icon, and so forth. While you initially only have four or five sprues, once you break them apart in sections you have maybe 16 or so.

The instructions have you assemble each body part separately, starting with the head. As the construction progresses you can see where these kits are designed to be mixed and matched. Check out the art on the side of the box for some ideas. 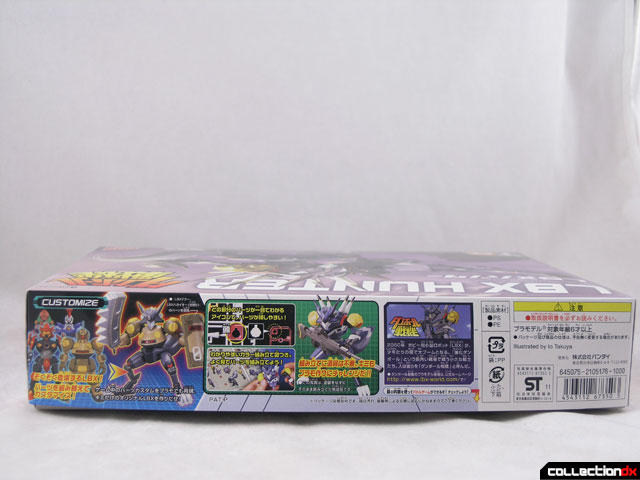 Decals are added during construction, and are basic paper label type. They go on smoothly, a far cry from the stickers they used to use. The kit is scored with lines showing where the decals go, so there’s no excuse for messing this up.

Assembly took me about an hour, and was straightforward. Each limb is on polycap ball joints and has a good range of motion. There is no waist joint. The kit is very action-figure like in its construction. 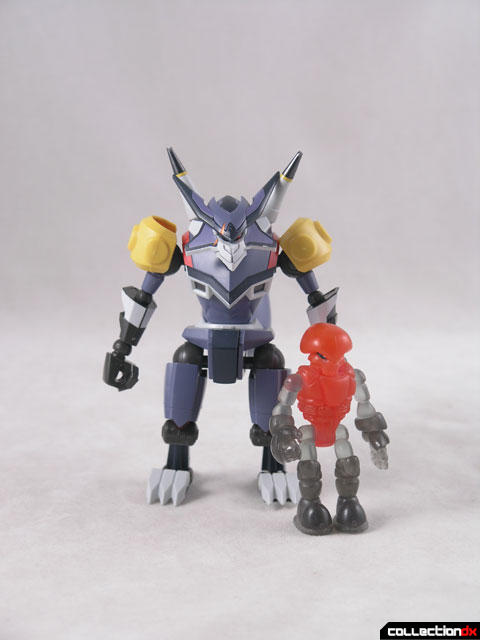 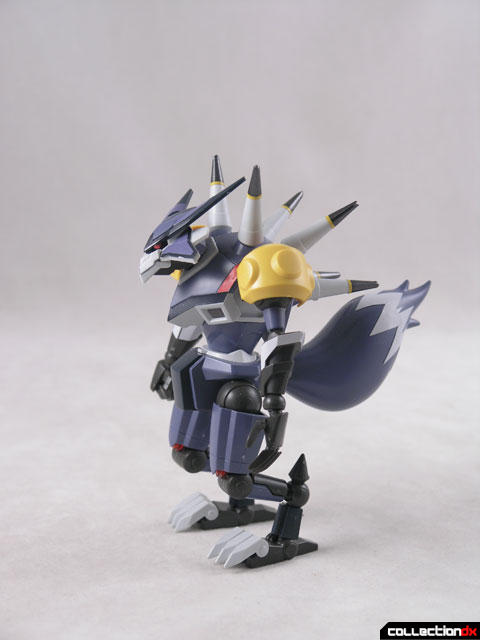 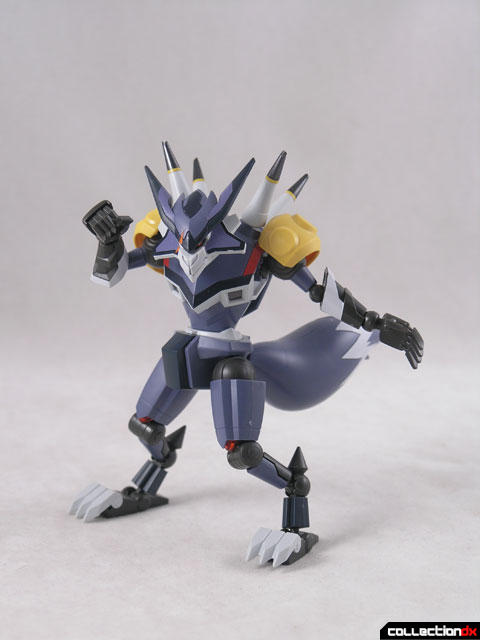 Only one weapon is included – a long rifle, and no variant hands are included. This is a kit made for kids, so there are no frills. 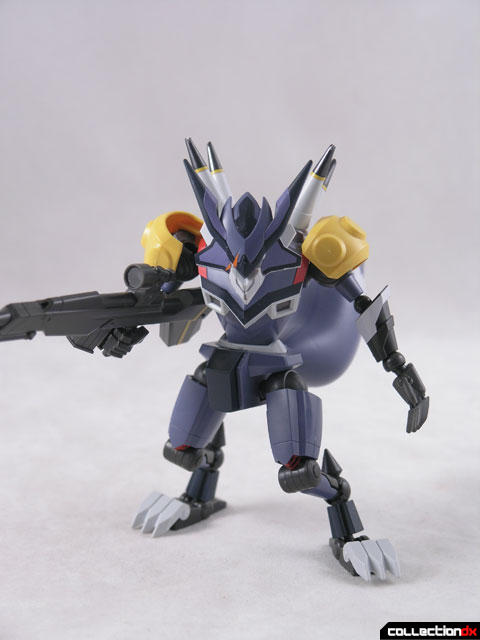 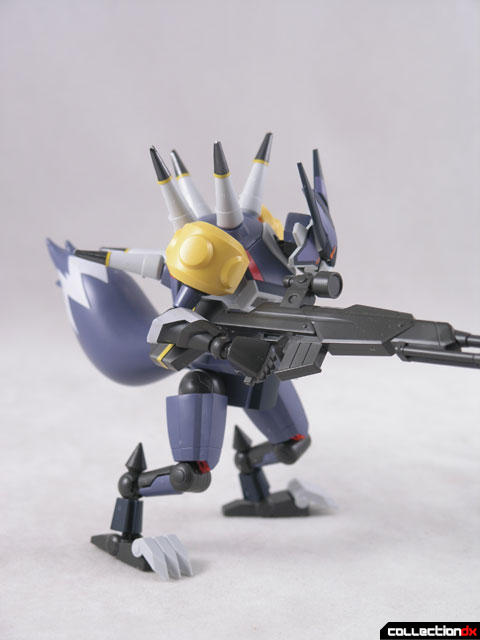 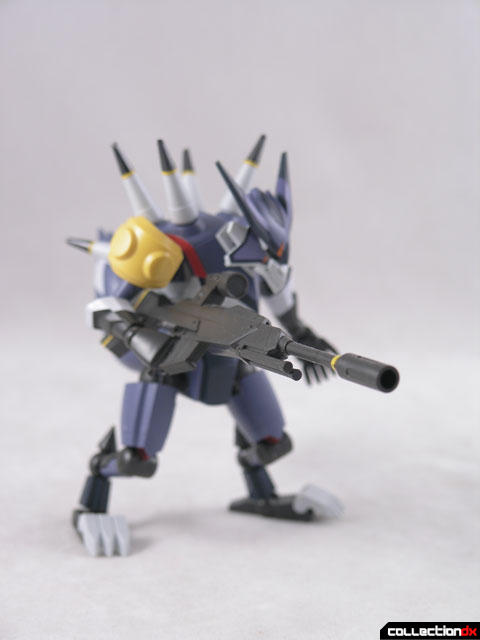 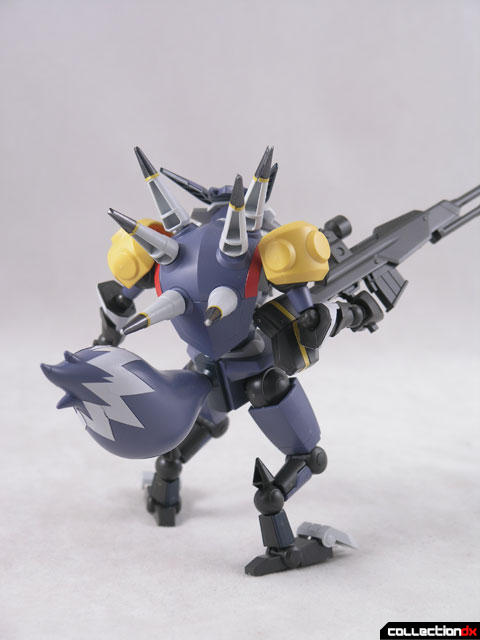 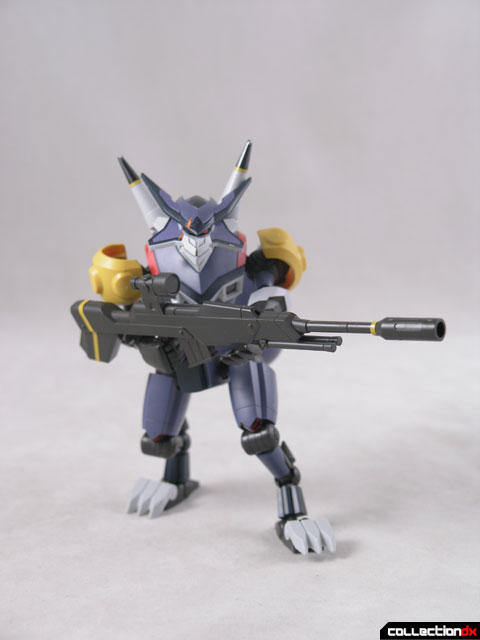 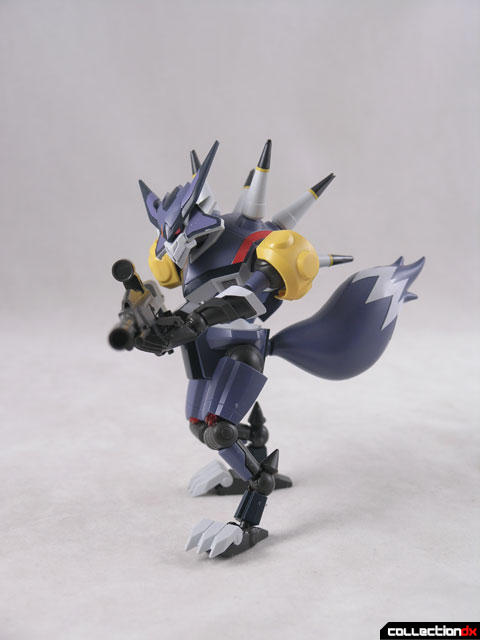 If you remove the chest plate and then the door with an X on it you will find a red chip. I assume this relates to Gameplay but I have no idea how. 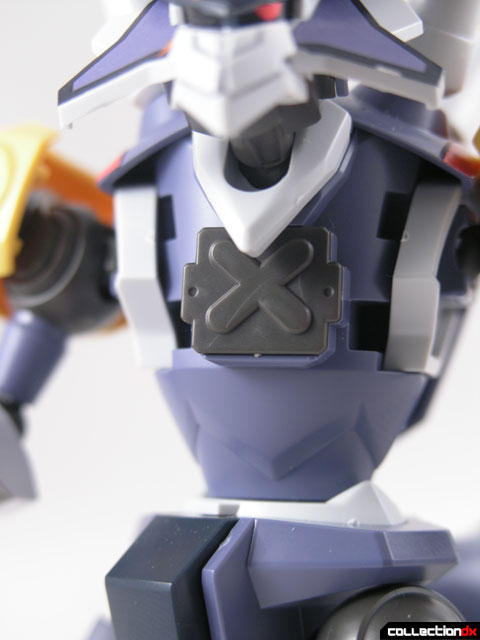 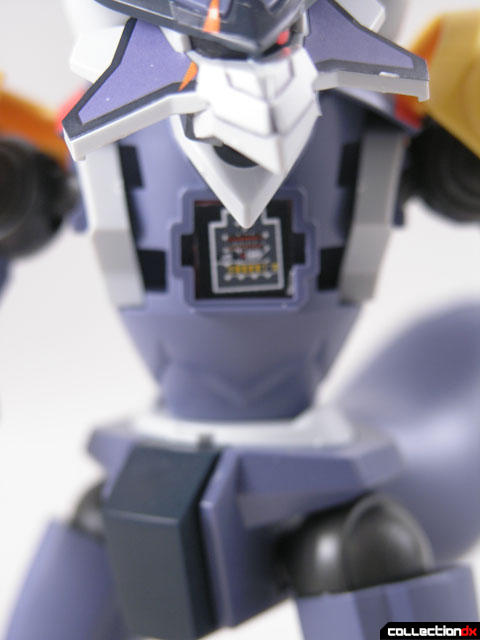 Speaking of gameplay, you also assemble a game piece which looks very much like the Xevoz game piece, and it looks like a similar concept. Each limb has a point value, and if you lose a limb you probably surrender the limb part on the game piece. Both the front and back covers can be laid side-by-side to create a game board. 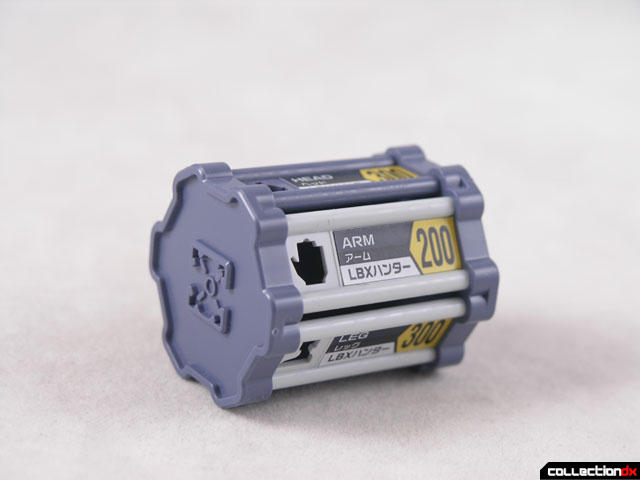 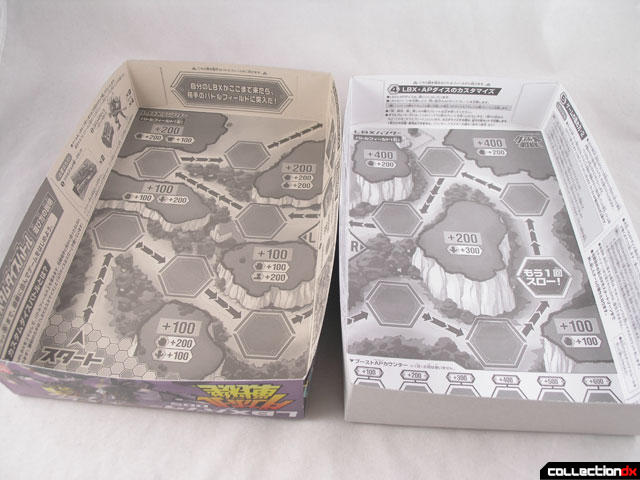 It’s a cool looking kit, fun to build, and the gameplay is an added bonus if you read Japanese but what I really found great about this was the value. These kits sell for about 1,000 yen, or about TEN BUCKS USD. 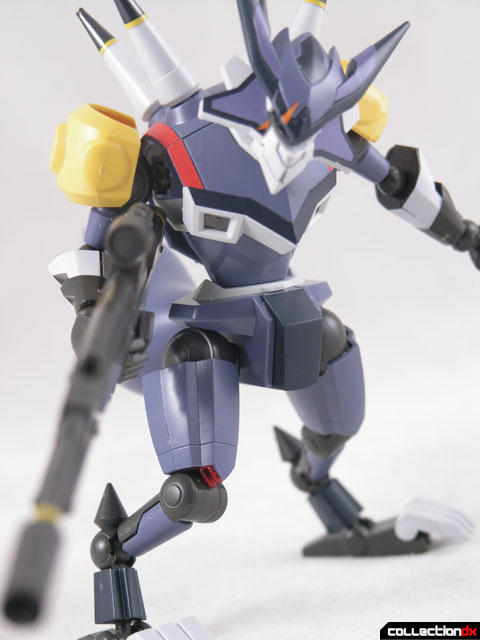 I think this franchise has potential to be a hit in the US, perhaps a logical next step from Pokemon and Bakugan. But do kids still enjoy model kit building? Do they have the patience? Only time will tell.

Fun kit! I love all the small extras, and the robot fox tail.

If they are snap together I think kids shouldn't have a problem, what people mostly shy away from in model kit building is the glue, especially the Testors glue we grew up with. CA glue helped things along but tamiya liquid glue is heaven.

I actually think kids will enjoy these if they don't have to paint or glue them.

Meh, I'll wait to see what some other sets from this line are like before I give a Yea-or-Nay.

The chest is an Evangelion rip-off. ;P

This one looks less creepy, though.

I think what could be a major draw with these figures if they do come stateside is if they have better joints than the Xevoz toys. The balljoints on the Xevoz toys often wear out quickly and some were overly tight resulting in snappage. If these toys can take that same concept but without all of the QC issues, they'd be an instant hit, in my opinion.

Has there been any talk of bringing the franchise over here? Or is that speaking in hypothetical terms? It seems like there's a pretty big localization time for anything Level-5 these days, and the franchise only began its kick-off within the last few months.

It's hypothetical. I think it would be a good candidate for stateside release.

Wow, that looks great! I mean, I probably wouldn't choose that one, but it looks like a fantastic line. Normally I don't go with the models (after all the Gundam models I bought back in the day; wish I woulda painted at least one) but this is a nice complete toy. Pretty cool! Wonder what else this line has...