I’m not a very big fan of figmas. I know how well-loved they are, and how much they can do; I’m not arguing that they’re poorly made. My problem with figmas - and it is a matter of opinion - is in all the ball joints. I think they are displeasing to the eye, especially when on a mostly naked character. I think the joints, which give the figures so much flexibility and versatility, take the viewer out of the fantasy of the character.

Except for this one.

I don’t know if it has something to do with the lack of hip joints, due to the skirt, or the dark clothing that downplays most of the joints, but from the moment I saw Ruri Goku, aka Kuroneko, in figma form, I adored her. It might have something to do with my unyielding love for the little otakette, or for the anime she originated from, “OreImo.” All I know is this: I’m smitten. 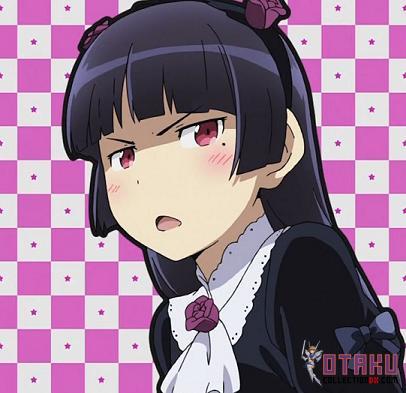 My last Kuroneko figure purchase was the Nendoroid, which, putting it mildly, has problems. Her pieces don’t fit together well, which gives her an unfortunate tendency to fall apart. I don’t get to play with her as much as I do my other Nendoroids, and because I love her so, it kind of left a hole in my figurine-loving heart.

Lets kick off with Kuroneko in her box. It’s the standard figma box, done up in pinks and purples: 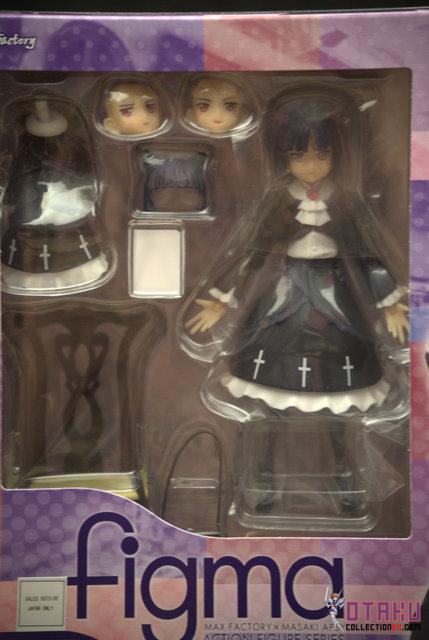 And here she is in her plastic casing, with all her lovely parts: 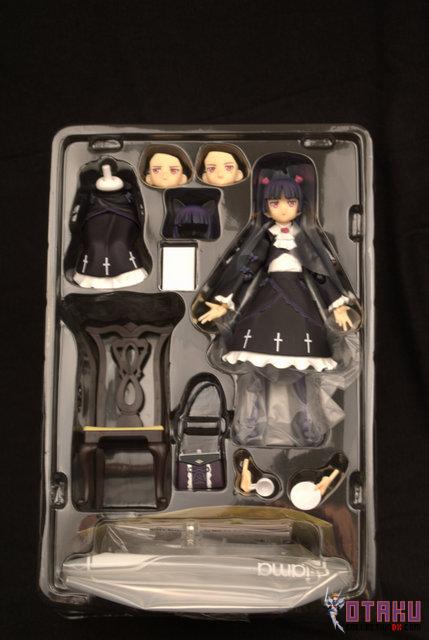 Here are all the parts. As you can see, she comes with a good handful of pieces, including her beloved DVD of Maschera, her doujinshi (and three stickers for the DVD and book), a chair, a purse, hair with the kitty ears, an extra skirt, the base, two extra faces and four extra sets of hands. 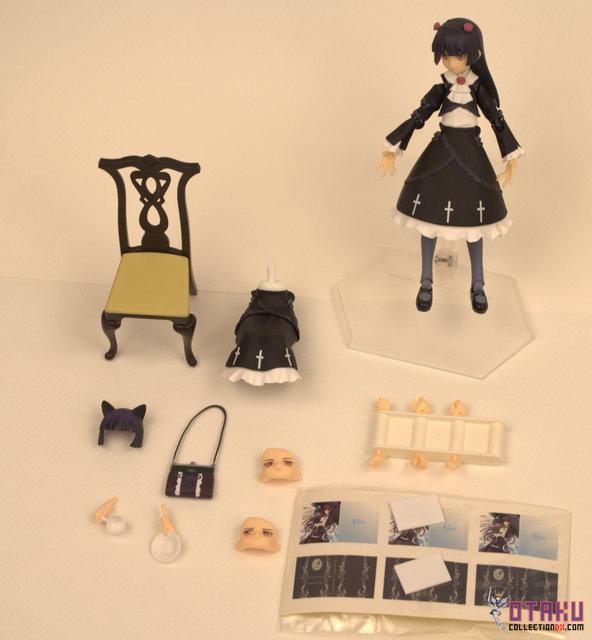 Now to play with the figure. The hands that come on her are set on the box showing her preening, in the very pleased with herself thing Kuroneko does so well. They looked more like West Side gang signs to me. 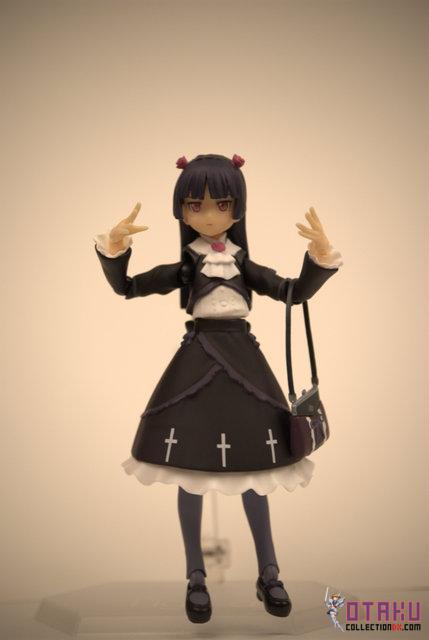 I slapped her purse on her arm because nothing adds class to a gang sign like a purse. The purse can be draped on her arm as well as over her shoulder and chest. You can see in that shot that her costume is perfectly accurate. The paint job is also pristine. Here’s a closer look at the purse: 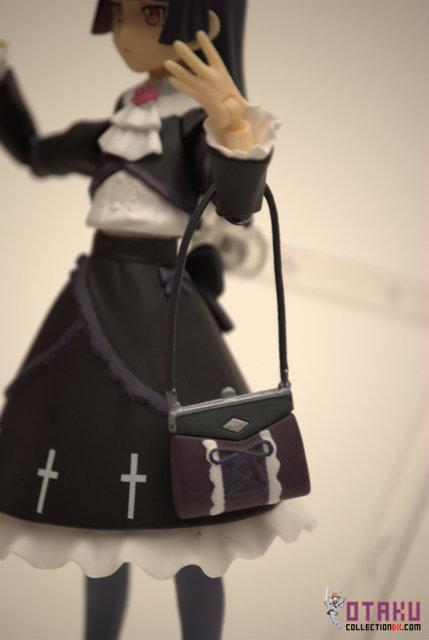 See how nice and clean that paint job is? You can see a little bit of the part between pieces in her shirt and skirt. The only other place where the joints/parts look awkward is in her left shoulder joint. It takes a little bit of play to make it look right.

Here’s Kuroneko with her Maschera DVD and her doujinshi: 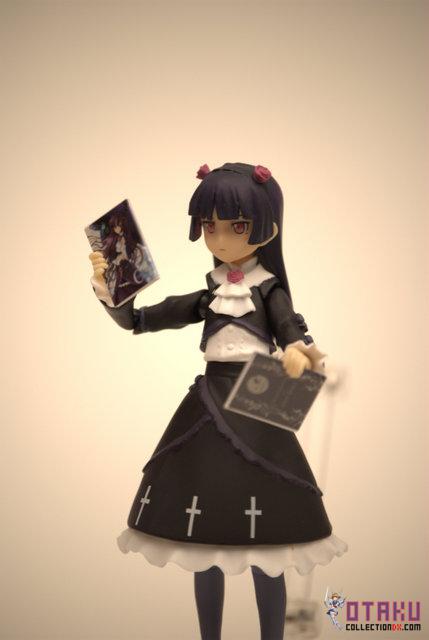 And here she is with her sad face and cat ears, nyaning as a Black Cat should: 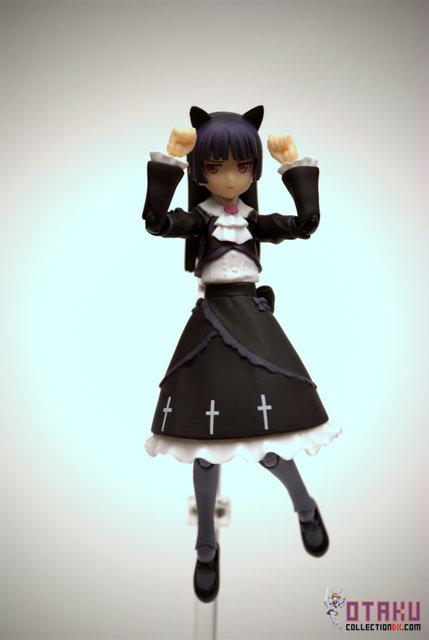 In this one, she puts her dukes up, ready to throw down. Someone must have talked smack about Maschera. 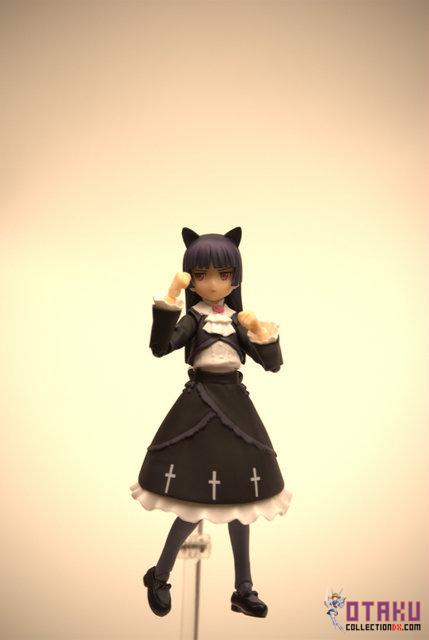 The only thing that bothers me about this figma is the base, and the way it doesn’t work very well with her hair. The hole in Kuroneko’s back is slanted upwards, so one would hope the peg wouldn’t interfere with her hair too much. That just isn’t the case.  In order to make her stand properly, you have to position her so that she looks down or to the side, moving her hair aside enough to allow the peg to fit into place. This also puts limitations on how you place Kuroneko on the base. It seems like poor planning to me. 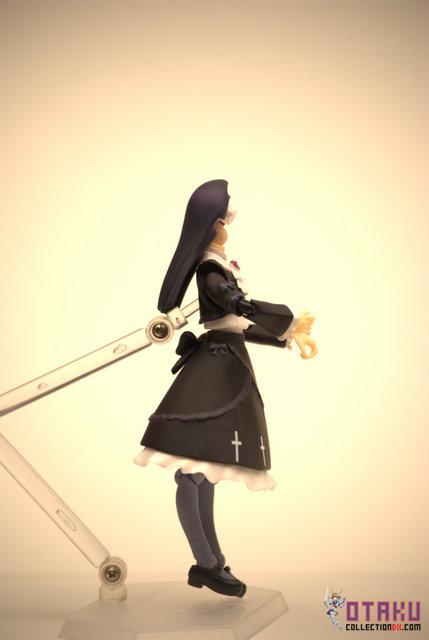 Luckily, she has another pose, one that doesn’t include the base, that I like better: 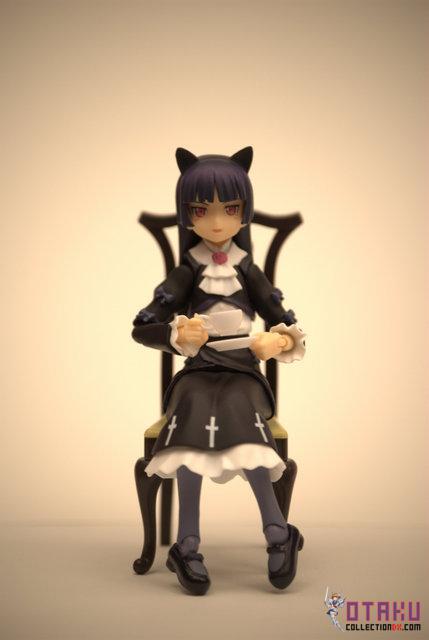 Kuroneko seems to like it better too; look at that happy face! I fitted her with her teacup and saucer hands, making it tea time. This is the pose I kept her in for display on my shelf.

If I had to summarize my feelings for this figure in one picture, it’d be this one: 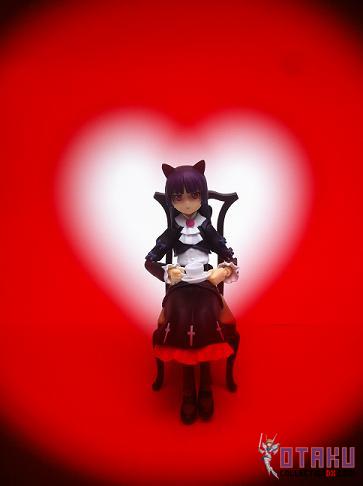 Sure, her stand is problematic and I have to tweak that right shoulder a lot, but in the end, it’s worth it. She’s just adorable, and all-in-all, a phenomenal addition to my collection. 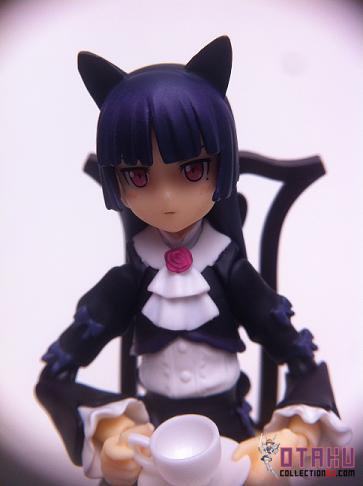