From Good Smile Company's Nendoroid line, it's "Oreimo's" (aka, "My Little Sister Can't Be This Cute") Kirino Kousaka! 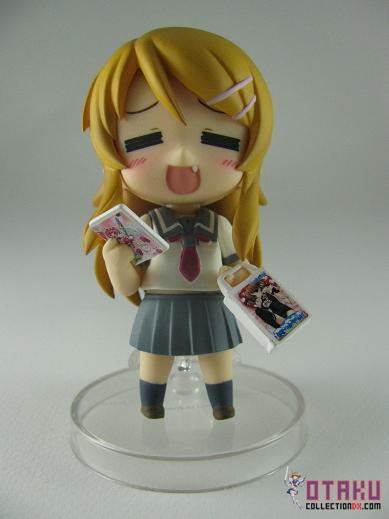 Kirino, the little sister otaku who obsesses over anime and eroge, is cute as a button in this Nendoroid version. The format means that she loses out on some of the character's tsundere nature, but that's okay. Her adorable side is just as inviting.

She comes in a box with a window. 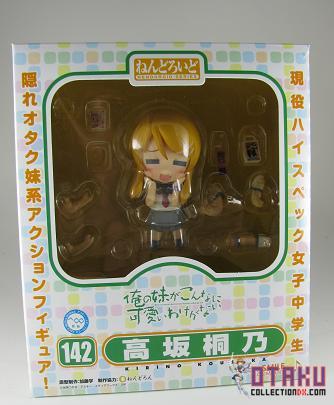 And her pieces are in a plastic container. The container isn't really very tight, and pieces come free, slipping around inside the plastic. This is especially true for the DVD, Blu-Ray and phone. 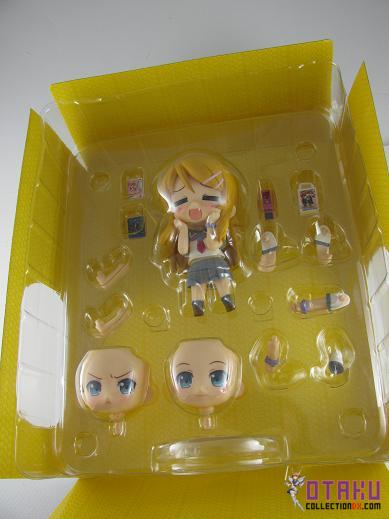 Kirino sits about 100 mm tall, on a clear base that connects with the bottom of her skirt to hold her upright. 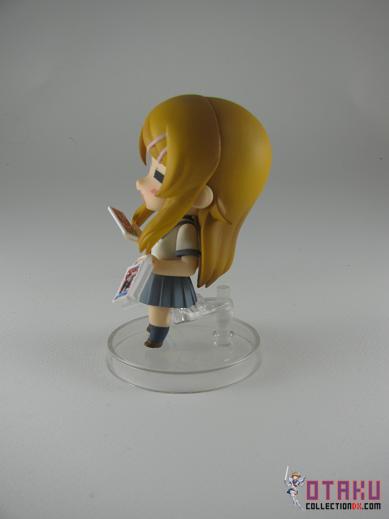 As you can see, she has hands that can hold onto her otaku treasures. 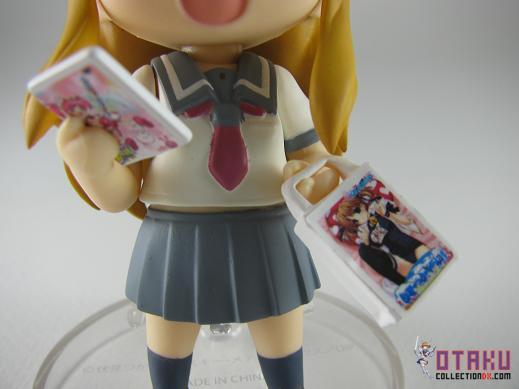 In fact, Good Smile was kind enough to bestow a few treasures for her to hold. The set also comes with a shopping bag and cell phone. 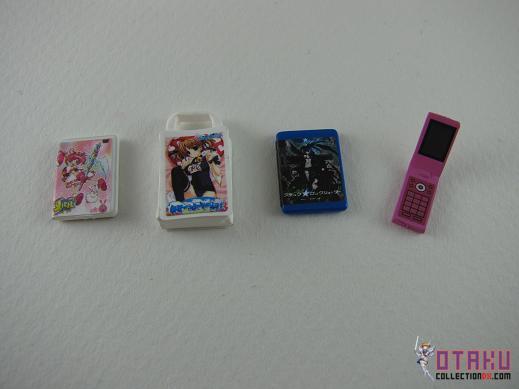 Here's a closer look at two of her accessories. The first is instantly recognizable to any fan of the show as her beloved anime, Stardust Witch Meruru. 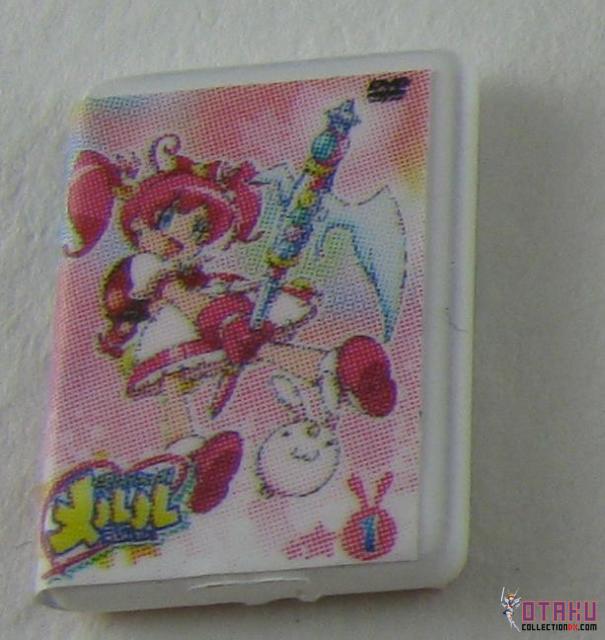 The figure comes with blank DVDs and a handful of stickers. As you can see, my application of the stickers was a little off. My aim improved on this Blu-Ray that will be familiar to most anime fans: 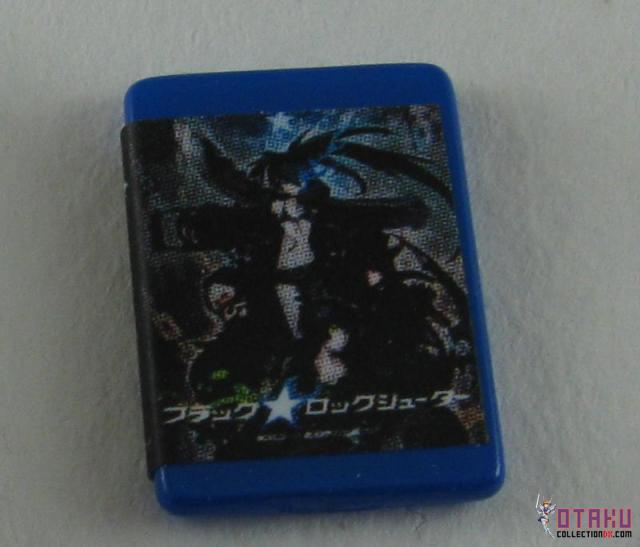 Yup, that's "Black Rock Shooter." An odd addition, as it was never mentioned in the show. It made me giggle to see it in the set, though. Because you can choose which stickers go where, you can give Kirino a Blu-Ray of her beloved Meruru. I'm selfish, so I put the "Black Rock Shooter" sticker on the Blu-Ray. I put the stickers from one of Kirino's little sister eroge on the shopping bag.

Kirino has a handful of accessories, most notably hands. 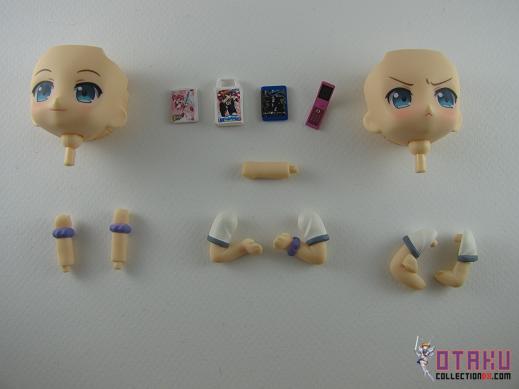 The sleeves for her school uniform also come off; for some of the hands, you'll have to share sleeves. The figure also comes apart at the head joint. However, the neck peg for the head often gets stuck in the figure, which means you'l have to pry it out in order to swap out faces. Each face has its own neck peg. It gets a little annoying. 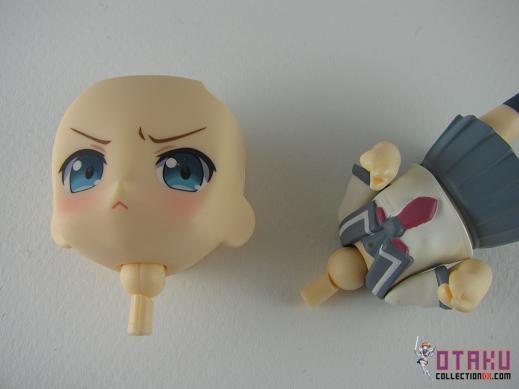 Here she is completely disassembled. 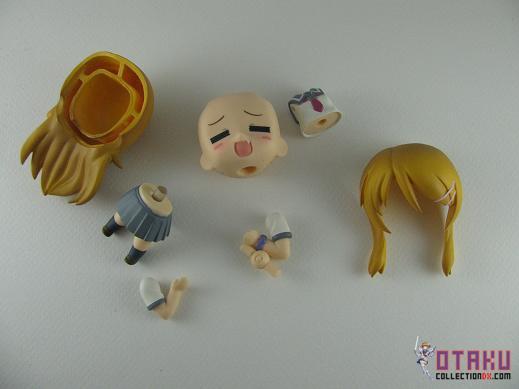 But once you swap it all around, you can make a lot of different Kirino poses. 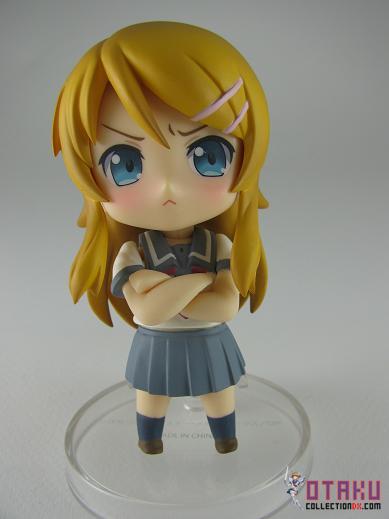 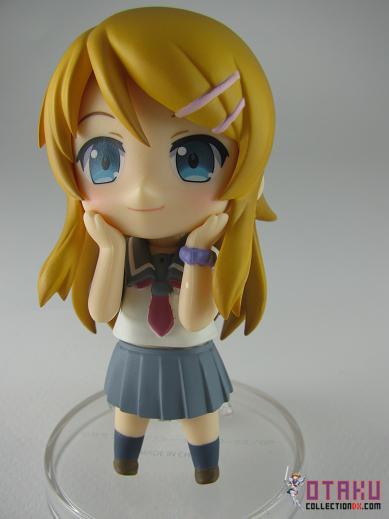 And happy Kirino. My favorite, however, is fan girl Kirino: 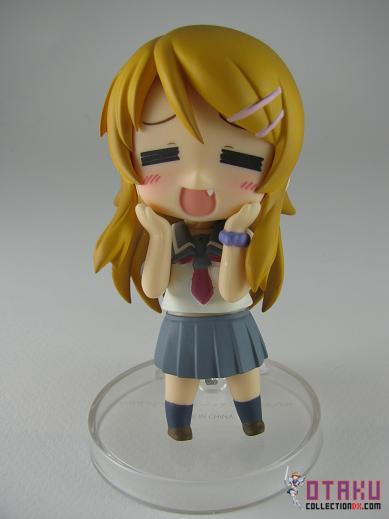 Clearly she's just hit a 100% finish on an eroge. I also like that they got her toothy little fang in the sculpt. It's part of her charm.

For the most part, Kirino is easy to assemble, disassemble and pose. She's a little bit wobbly on her base, but not enough to really annoy. The paint is good, the sculpt is smooth without any irregularities, and she's a lot of fun to look at. I wish she'd come with more accessories, but my fondness for Kirino, and the show, is enough that I don't need more bells and whistles to love this nendoroid.