I’m not going to pretend to know much about Kamen Rider Thrust/Kamen Rider Gai. Ryuki is one of those shows that I just haven’t gotten around to watching all of yet, and it might be a while before I do that. A few minutes of research on the internet shows that Thrust is some dude who was into Motocross, but I don’t really know much other than that. What I do know about him is that he is one of the few Kamen Riders whose motif is that of a rhino, along with Kamen Rider OOO SaGoZo.

The suit designs from Kamen Rider Ryuki all have several design elements that they share: vent masks, silver accents, and several circular ports on their bodies for weapons. Combined with Thrust’s grey color scheme, Kamen Rider Thrust has a very calm but unified color scheme that is effective in getting across the rhinoceros theme and remaining consistent with the rest of the Ryuki Riders. 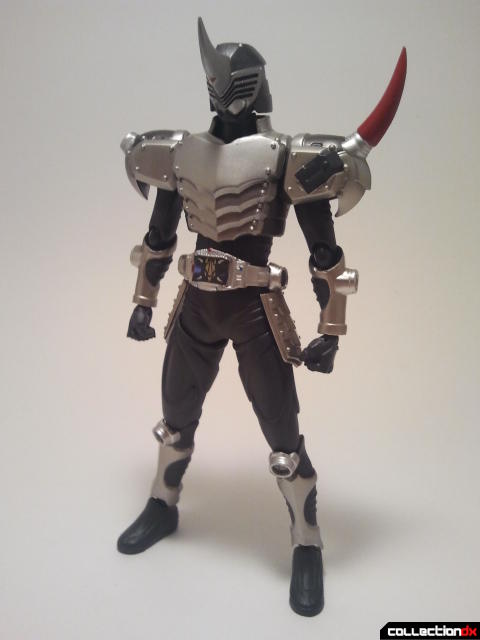 Most of the Figmas that Good Smile Company produces tend to be anime girls, so seeing Figma do a larger male body is quite interesting. Most of the articulation is pretty standard for a Figma: ball-socket shoulders, a peg bicep swivel, a torso crunch, along Figma-jointed elbows, knees, ankles, and neck. The lack of a waist joint is a bit unfortunate, but that just comes from being spoiled with S.H. Figuarts after so much time. The knees noticeably use the more uncommon larger Figma joints which are super smooth, tight, and oddly therapeutic to bend. 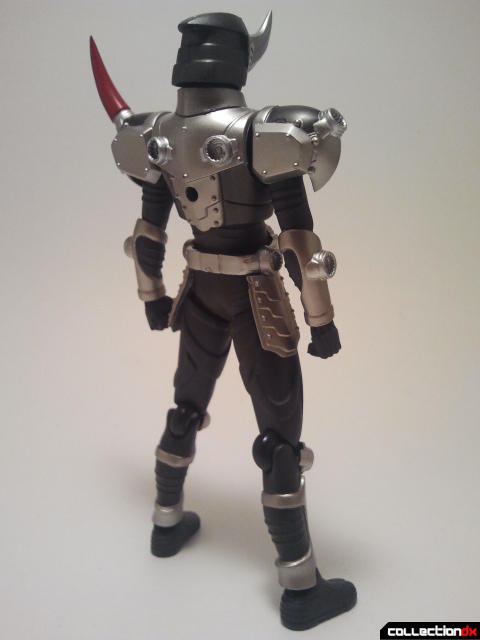 The larger body and footprint make it very easy for Thrust to stand without the use of the included Figma base. 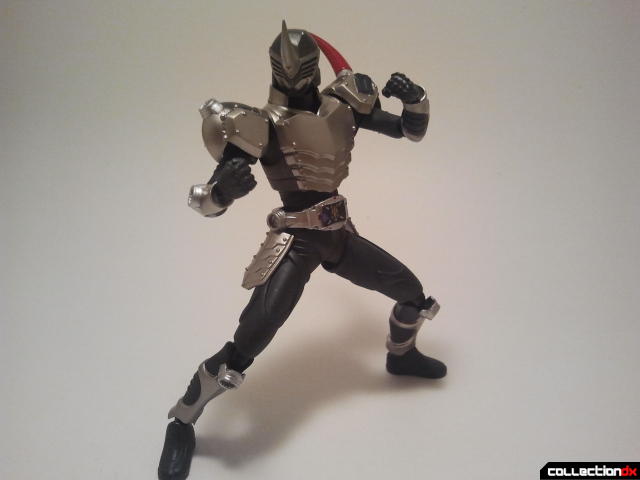 Another interesting note is that Thrust’s cowl gets in the way of his head articulation. It’s made of the softer plastic material that Figmas are fond of using, however, so the cowl doesn’t cause any problems with articulation.

Thrust manages to simultaneously come with too many accessories and too little. He comes with the standard Figma set of hands, which includes fists, holding hands, splayed hands, more differently splayed hands, and two more differently holding hands. In addition to the hands, he also comes with his Strike Vent weapon and Final Vent card as well. A lot of these hands are superfluous and I don’t use them at all. 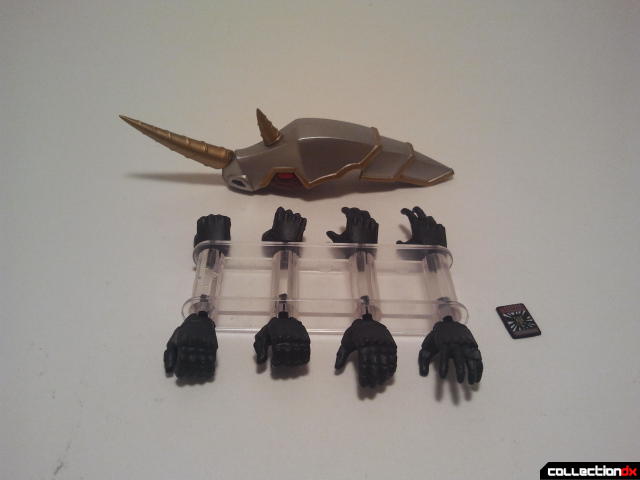 The Final Vent card fits in one specific card holding hand. You just wedge it in between the index finger and thumb and it fits in snugly. I do wish that it would fit in a little bit better though in because although the fit is snug, the card still tends to slip out easily if the Kamen Rider Thrust is knocked or budged. The front of the card is really well painted. It’s too bad the other side is completely blank though. 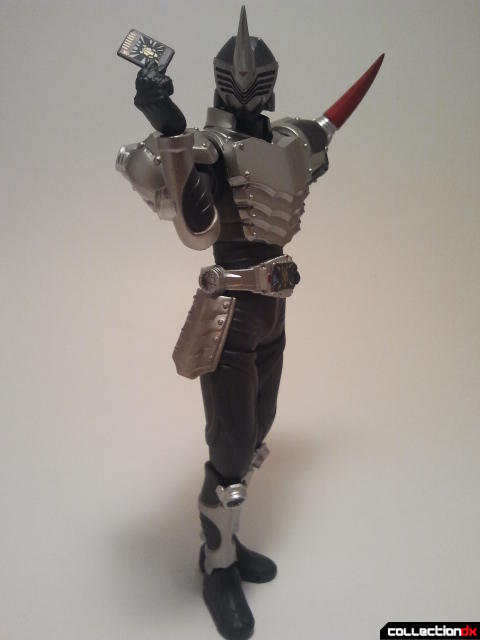 Thrust’s Strike Vent weapon is like a gauntlet that fits over his right forearm. He holds onto a handle with the specific angled hand. The end result is effective and Thrust looks pretty cool with it. 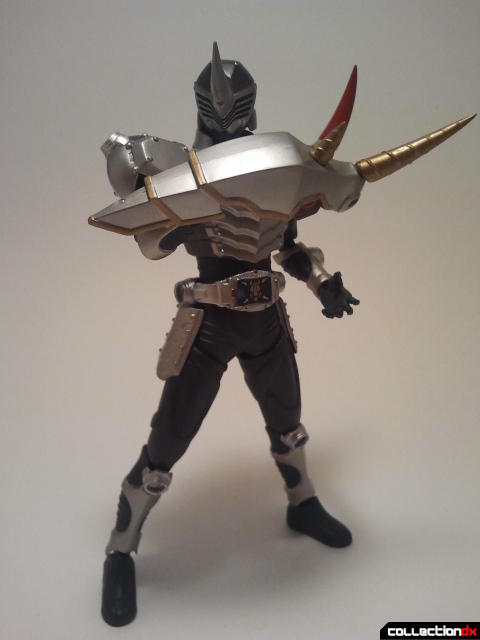 The Kamen Rider Dragon Knight Figmas marked an interesting point in time where Figma was making Kamen Rider action figures the same time Bandai was making a lot of S.H. Figuarts of Kamen Riders as well. The end result is a pretty good toy. The details and paints are sharp, and the articulation is good. Some of the Figma design elements, however, don’t work quite as well for a dynamic Kamen Rider toy. 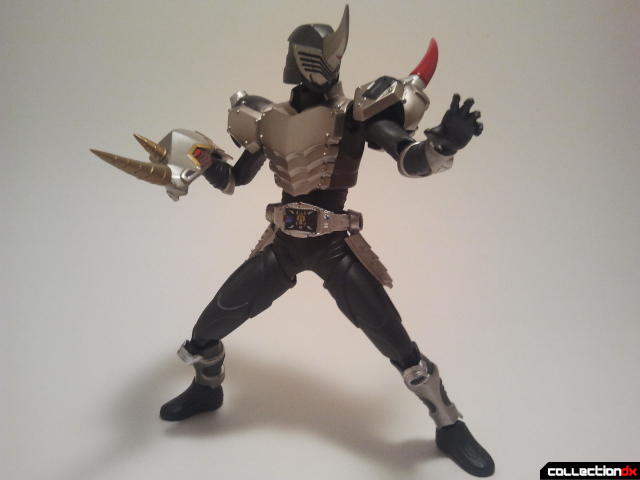 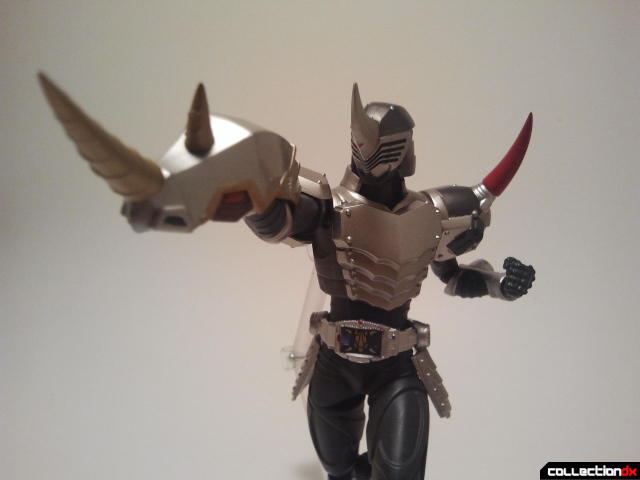 At the very least, the Figma Kamen Riders are an interesting curiosity for Figmas that were produced. On top of that, they are pretty good toys too. If you have some spare cash and spot a design you’re fond of and it’s not too much, check it out. 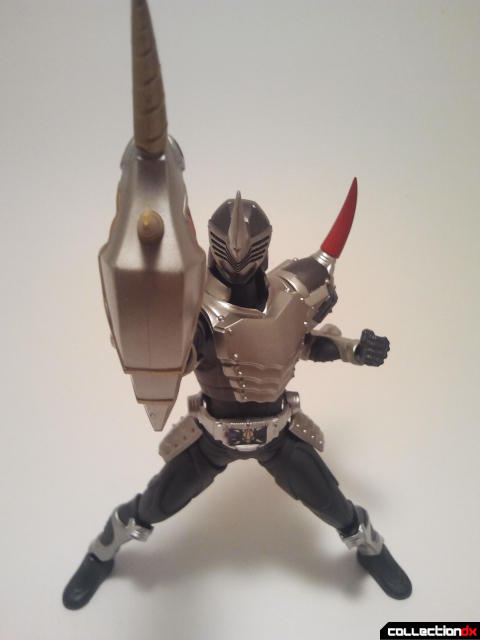 This toy just got more fun.

There is a waist joint please believe me ;_;

well, the torso swivels and if you grab his midriff you can turn it, so close enough? The belt is fixed to the front, though, which makes some rotation harder.

Yeah, I noticed it actually after I took all the pictures and finished the review. But it's a little fiddly and I dunno if I really count it since it's on that thin little stem assembly.

Seems to me- and it's been a few years since I saw it- that Thrust didn't get used very much in KR:DK. He was kind of a mid-level baddie, there to say "Okay, you know what the threat is, and here is one that you will see commonly even though he is not a boss or a stupid grunt".

But like Torque/Zolda, I've grown attached to this suit design regardless of the character within it.

Figma has done a great job regarding their Dragon Knight line. I've already owned Wing Knight and I'm not sure if I would get Siren or Wrath.

I just hate the fact that some Ryuki and SHF purists out there bash the line when they compare the Figma versions from the SHF versions. I know that the SHF versions are superior but would you be willing to cough a lot of cash now that some of the SHF Ryuki riders would be exclusives?