The story of Kamen Rider Ryuki revolves around the Kamen Rider War, in which serveral individuals who take up the title of Kamen Rider fight each other to be the last Rider standing. After an as slow start to the Kamen Rider War, a wild card is thrown into the mix of Riders. Takeshi Asakura, a convict enjoys spending his jail time bashing his head into the bars on his cell, is given and Advent Deck.  Asakura comes from a very troubled past. When he was younger, he set his own house on fire with his family still inside. He also enjoys  starting fights with anybody who annoys him. Since he lacks the humanity that is keeping the other Riders from killing each other, he readily jumps into the Kamen Rider War without hesitation of killing the other Riders. 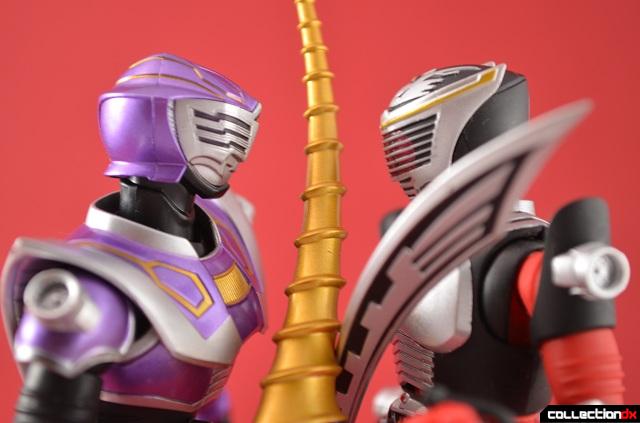 You annoy me! Let’s fight!

After making a contract with Venosnaker and escaping from prison,  Asakura ( now Kamen Rider Ouja) has one thing on his mind: kill the lawyer that failed to keep him out of jail, who just so happens to be Kamen Rider Zolda. 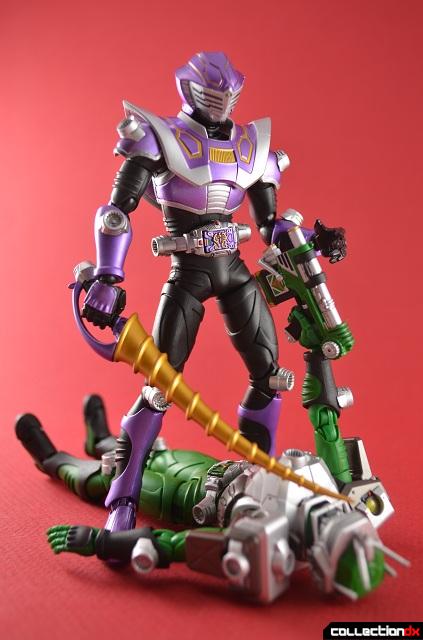 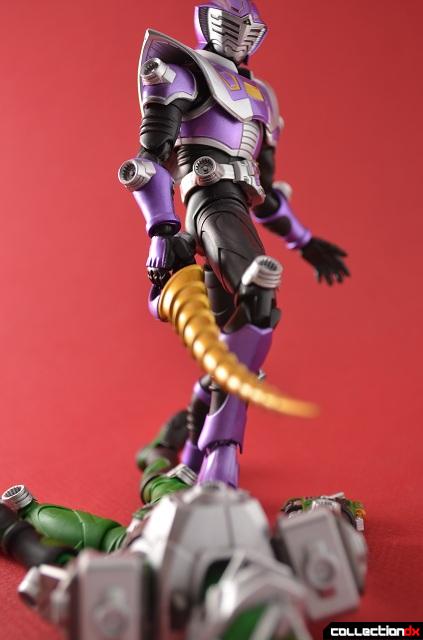 His utter disregard for anybod and anything, makes Kamen Rider Ouja a fearsome adversary for the Riders.
The box is the standard S.H. Figuarts box size, not the oversized ones of the previous three Kamen Rider Ryuki figures. 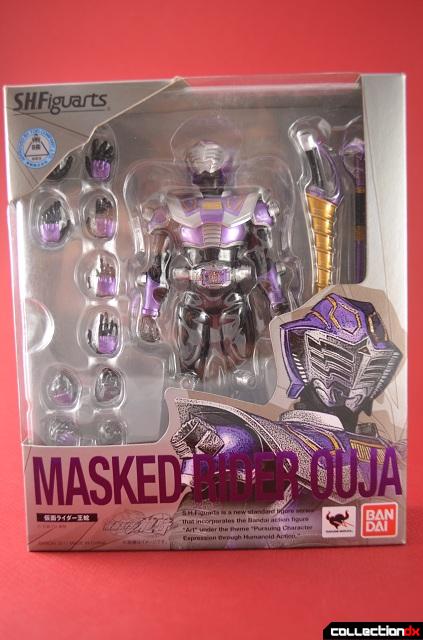 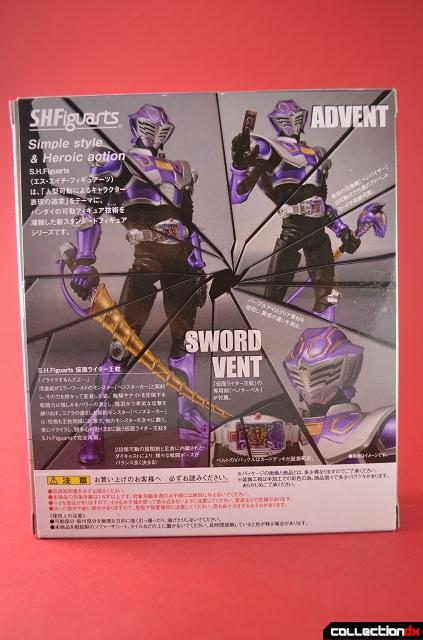 As soon as I picked up Ouja, a silver connection point cover on one of the forearms fell off.  Not off to a good start, since I hate how those things have an aversion to staying on the figure. However, with Ouja, they did not come off as often as they did with Ryuki or Zolda. So the annoyance factor was minmal.

The articulation is the superb combination of joints that the S.H. Figuarts line is known for. 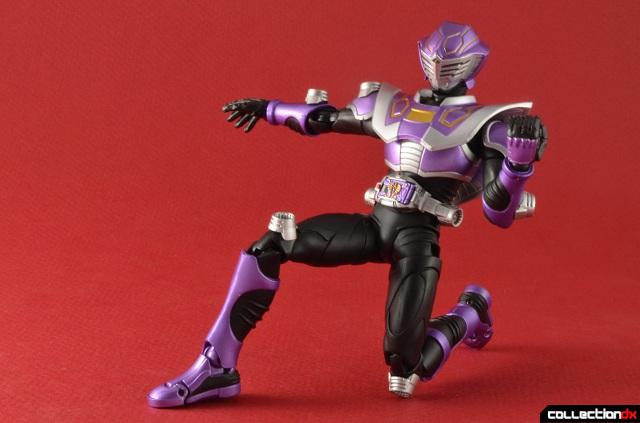 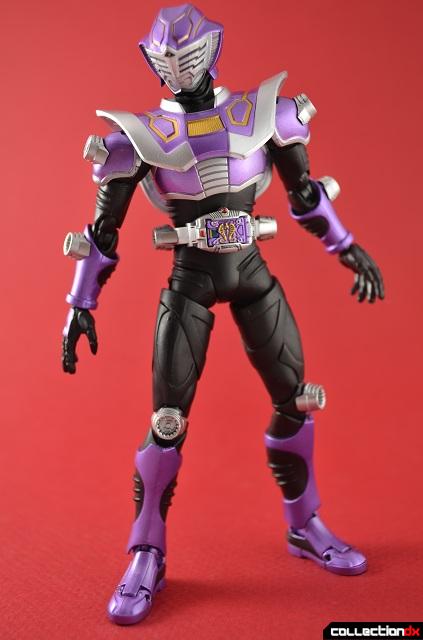 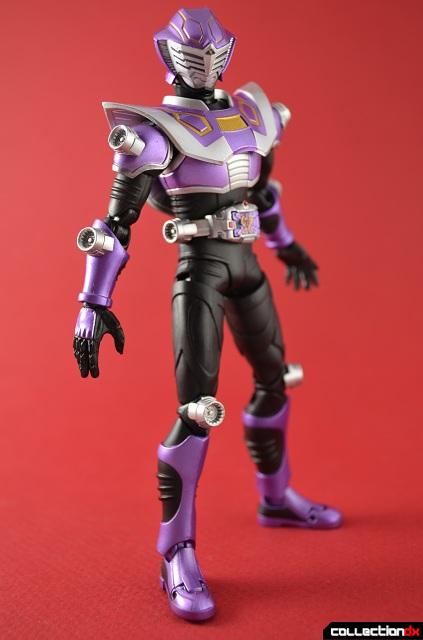 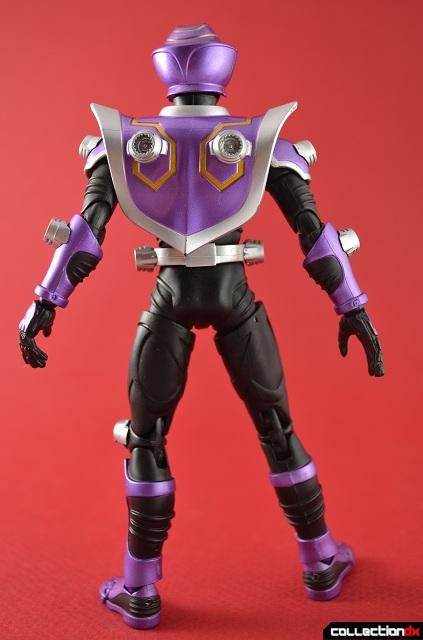 The Cobra motif of the suit and helmet give the impression of an evilness fitting of the man who killed his own family. 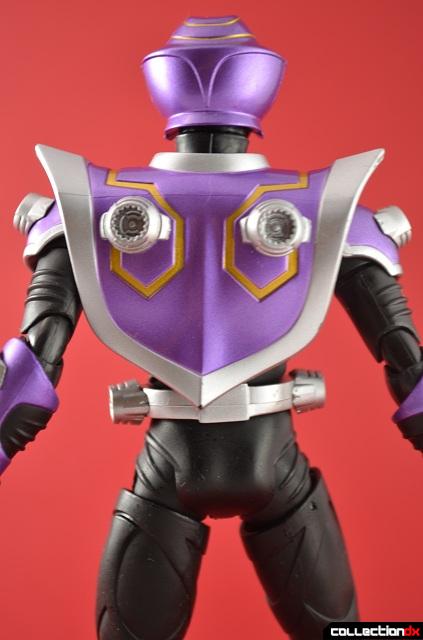 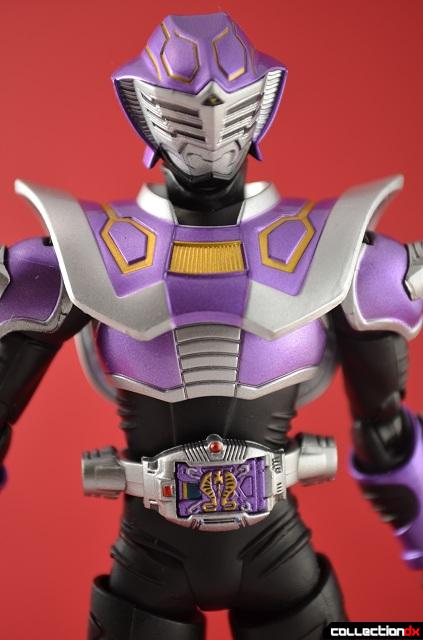 One of the details of this nicely sculpted figure is the henshin belt of Ouja, which houses the Advent Deck. 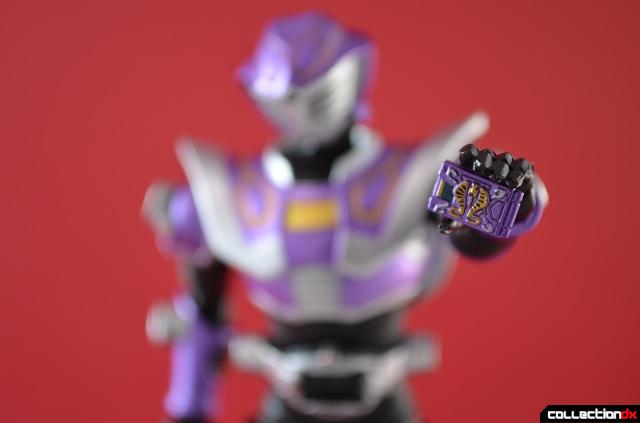 The Advent Deck holds the cards that the Kamen Riders use to summon weapons and  Monsters to fight each other.
Kamen Rider Ouja is comes with 6 little Advent Cards: 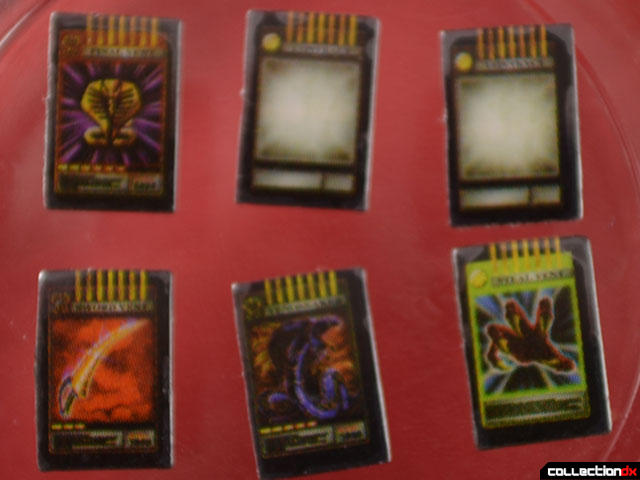 Final Vent: Venosnaker uses his snake spit to launch Ouja, who performs a bicycle kick, into his enemy.

The back of the cards are all the same. Otherwise they wouldn’t make much of a deck, would they? 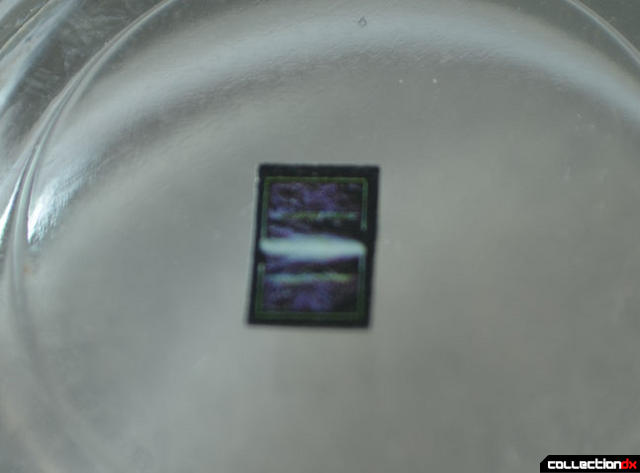 Yes, that is a stock photo. The backs of all the Ryuki cards are the same.

Ouja has a sweet cobra cane, which you would think belonged to a pimp. I mean who else wears purple and walks around with a cobra cane? 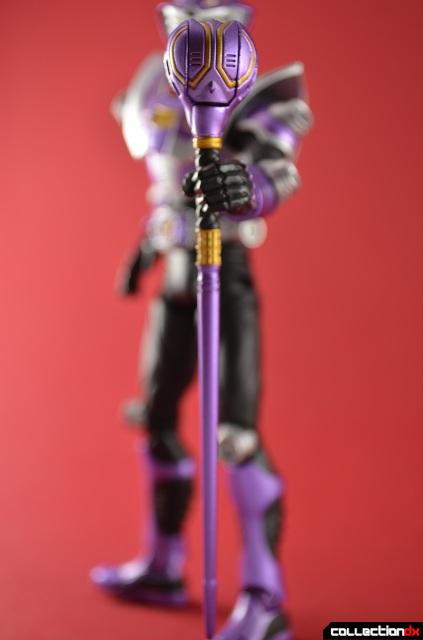 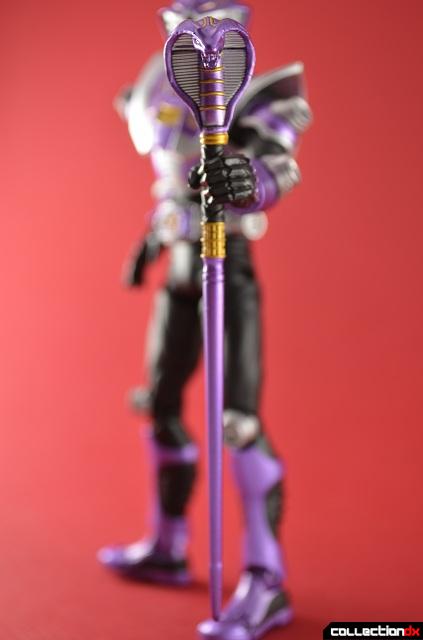 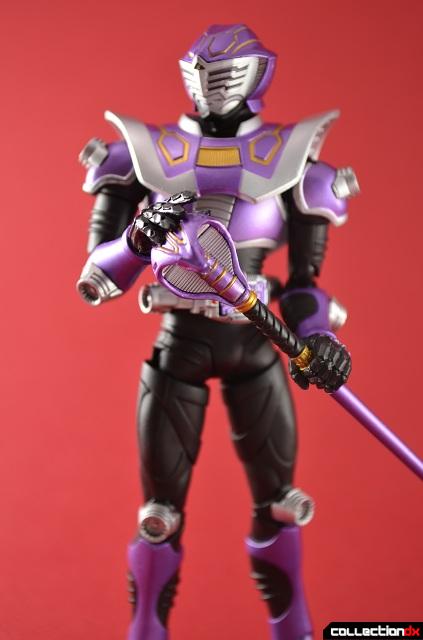 In reality though, the Veno Visor  serves as Ouja's card inputting device. 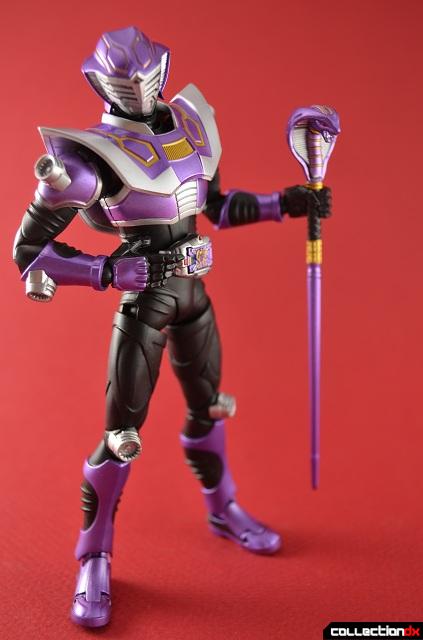 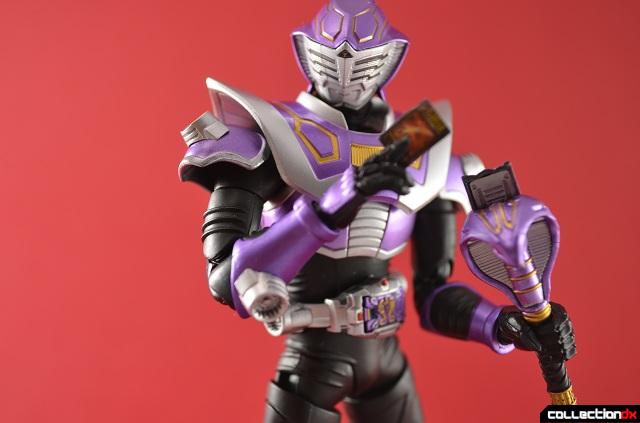 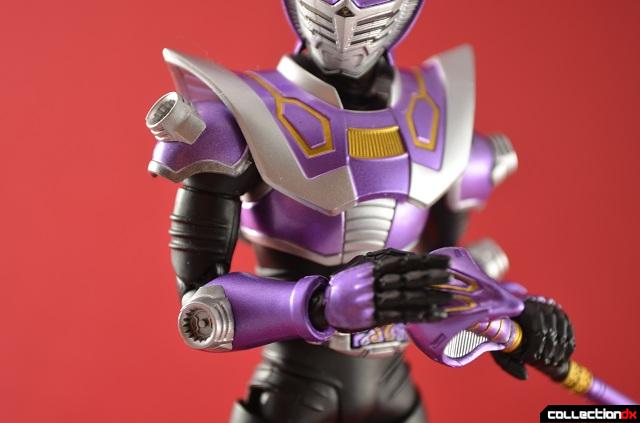 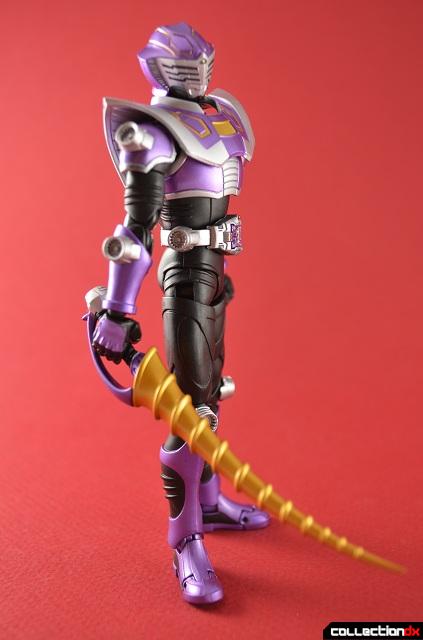 Ouja’s main weapon is the Veno Saber, which is formed from the tail of Venosnaker. 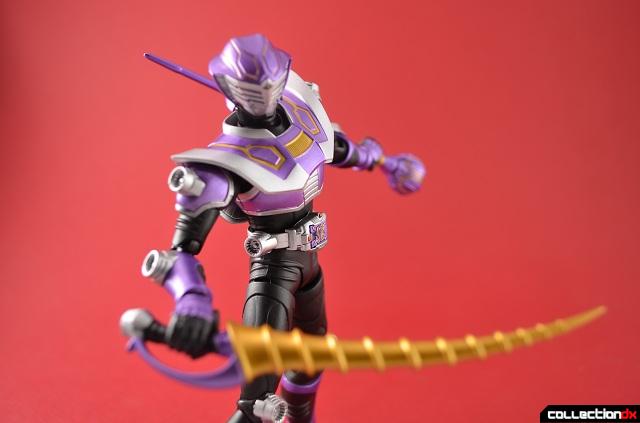 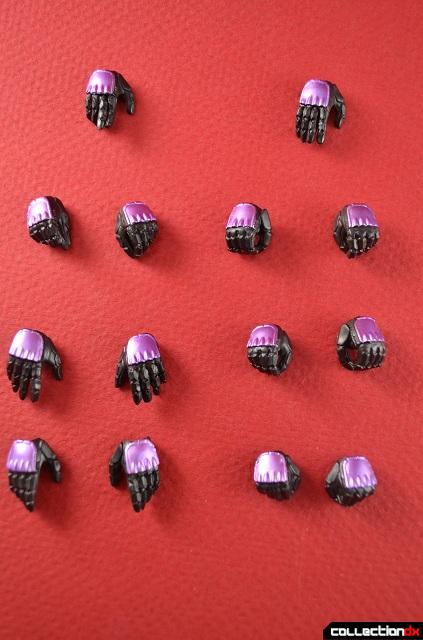 For once, I felt like a figure came with too many hands! This is most obvious when you look at the plastic tray that Ouja comes with becasue ¼ of the space is used up by the hands. While most of the hands that were included were warranted  (like the one with the index and middle finger made of softer plastic, to allow Ouja to hold the cards in the same manner as he does in the show); there are a several hands felt like unnecessary additions.
Well that is pretty much it for what is included with this figure. Out of the 4 Kamen Rider Ryuki S.H. Figuarts that have been released so far, Ouja is the lightest in terms of content. Luckily, the connection points on these figures are universal, so you can have some fun mixing and matching some of the other parts from the other Riders. 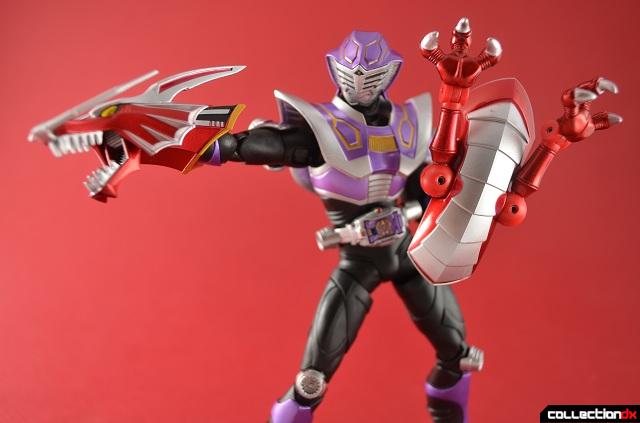 You can call me Kamen Rider Ryu-ja

Since Ouja is light on the extras, his price does reflect that. As such he serves as a good filler to complement the other S.H.Figuarts Ryukit, or as a starting point for anybody who is considering getting into Kamen Rider Ryuki S.H. Figuarts, but does not want to start off with the slightly pricier Ryuki, Knight and Zolda. 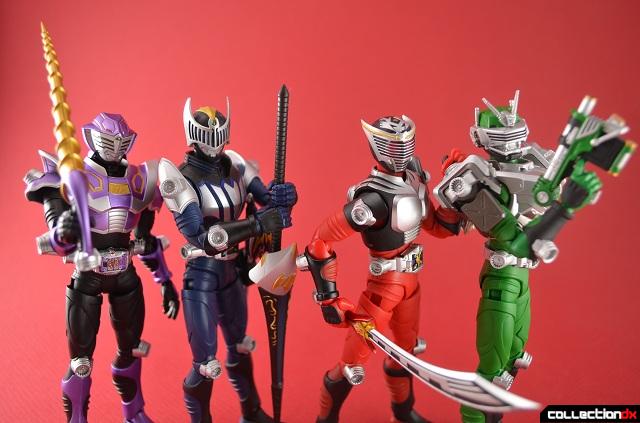 I really want to look past the fact the Ouja did not come with his Contract Monster. After all this is a solid figure, with a couple of good accessories and gimmicks. If this were any other series,  the job Bandai did with this figure would be considered pretty great. In fact, Bandai has released other S.H. Figuarts with much less stuff than they included with Kamen Rider Ouja. However, the Contract Monsters are a pretty big part of what makes the Kamen Rider Ryuki series unique. They are the partners of the Kamen Riders, who fight alongside them. 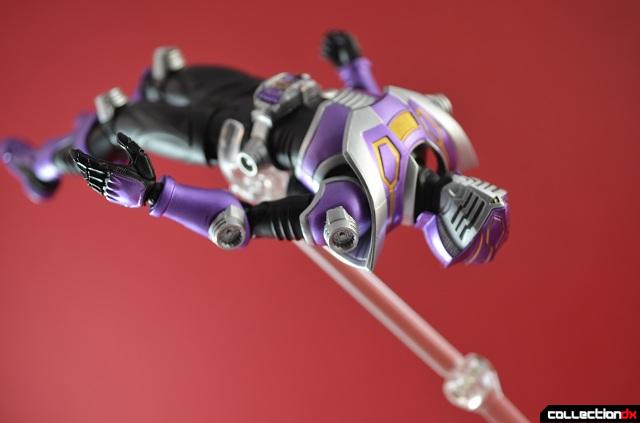 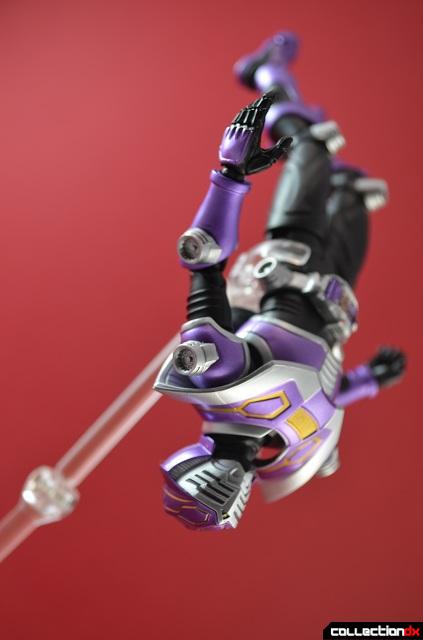 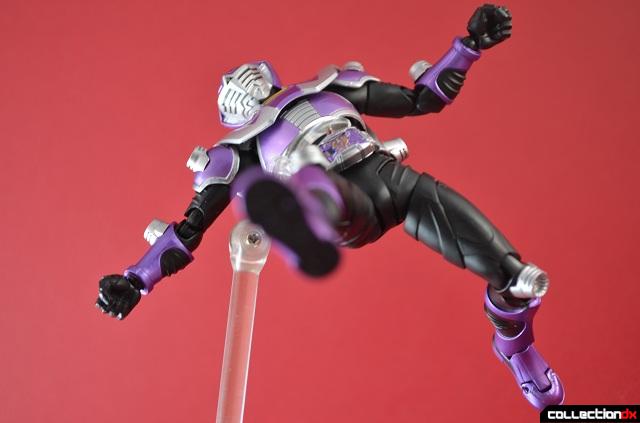 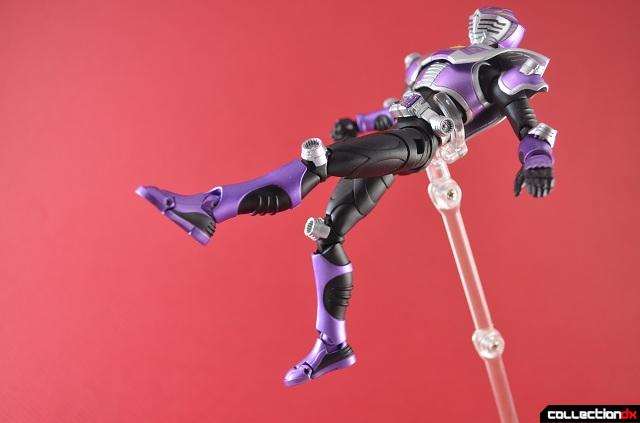 It looks kind of cool, but a bit empty without Venosnaker.
To have Ouja without Venosnaker is like having peanut butter without the jelly, or Coke without rum, or SpongeBob without Patrick. Sure these things can be good by themselves, but together with their other half they are awesome!  I was left feeling like Bandai missed another oppurutunity to turn a good S.H. Figuarts release into a great one.

It's awesome. Really gives this guy some real personality. The others so far have guns, swords and the like, but then this guy swaggers out with a purple cobra cane. I see what you mean though about being light in the accessories department.

Maybe they will release the Advent Monsters seperately depending on how good the figures without them do. This wouldn't be the first time doing something like that, such as the MonsterArts Effect Part sets or the Fourze Module sets.

Actually, the other Mirror Monsters are Web Exclusives.

I agree. This is classic Bandai. They do it with just about every line they have. I am sure there is some logic as to why Bandai is going to release the Contract Monsters separately as Tamashii Web Exclusives. I would have preferred that they just included the Riders and Monsters in one package, like they did with Ryuki and Knight. Had Bandai done that, I would have snagged these guys on day one.

i have him too, and i like him a lot, though he's light on accesories

just a question: these tamashii web exclusives, are they available at a normal price somewhere? i don't see myself paying 90 dollars on ebay for a single figure.

You can go through a middleman service like Yokatta. Then You just pay shipping and a little extra for the service. It's still expensive, but not as bad as the secondary market prices.

You can try a middleman service that will buy the figure for you and ship it from Japan. That being said, it will still be expensive because Tamashii Web Exclusives usually cost more because they are produced in smaller quantities. The cheapest I have seen Magnugiga ( Kamen Rider Zolda's Monster) for is around $75 plus shipping from Japan.