When it comes to the Kamen Rider license, Bandai pretty much has an iron grip on the production of the toys. A few years back, however, Max Factory was able to produce toys based on the Kamen Rider Ryuki series’ American adaptation: Kamen Rider Dragon Knight. This was due to a legal loophole created by the existence of the series.

Kamen Ride Axe comes in a window box. It is labeled using the American names for the show and character because of the license being used. 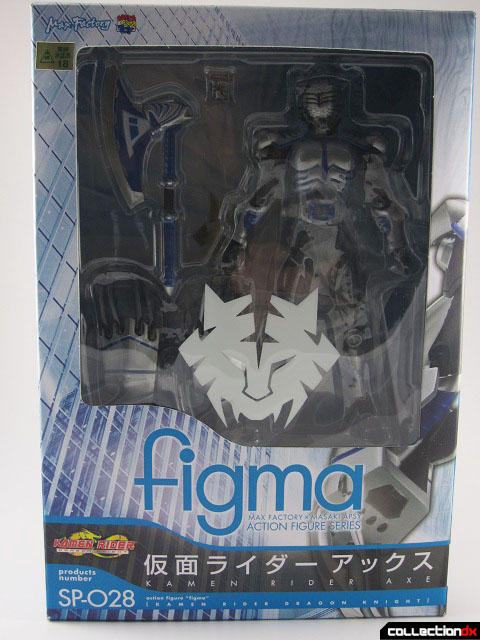 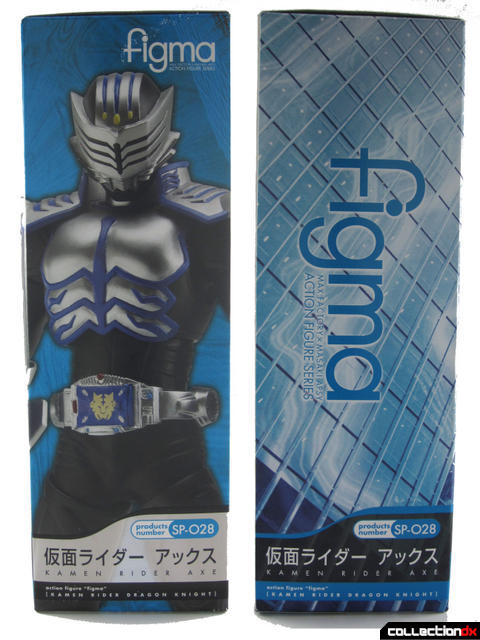 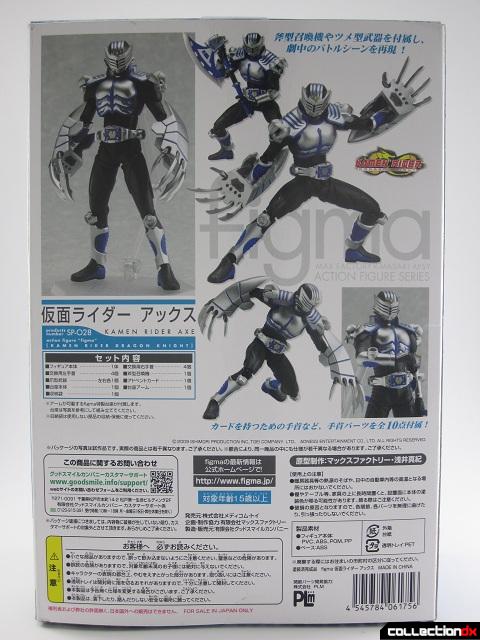 Max factory does a decent job at bringing Kamen Rider Axe to the toy maket. 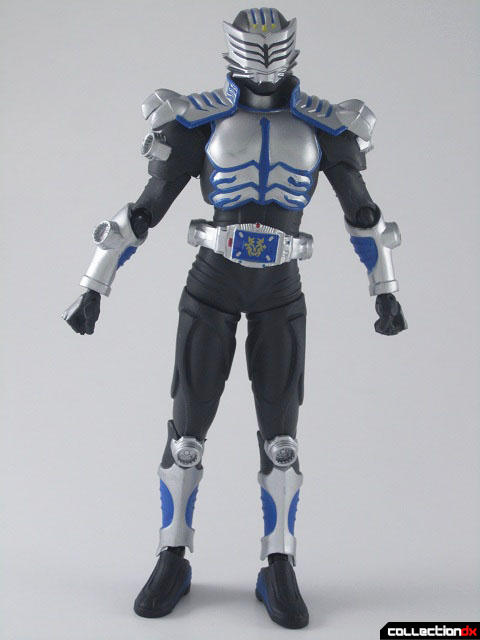 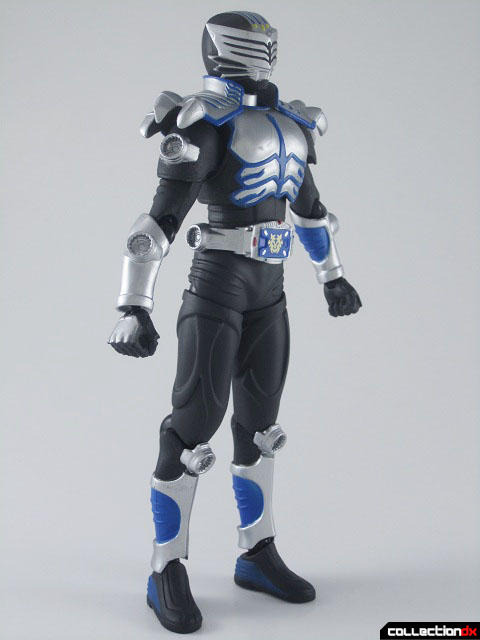 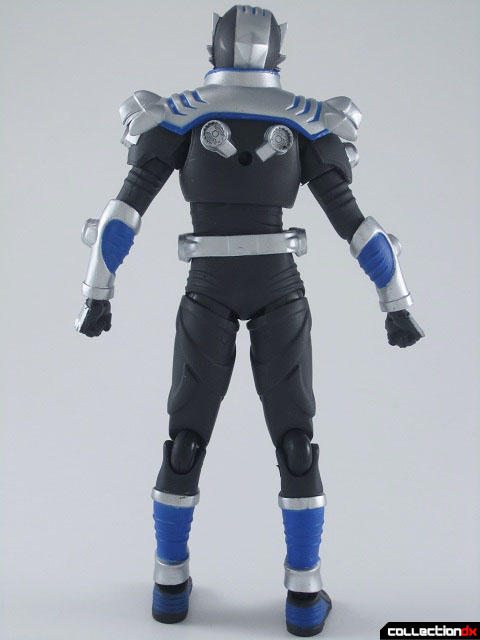 He is slightly shorter than the S.H. Figuarts Ryuki. The paint job is good,but not as sharp and detailed as Bandai S.H. Figuarts Kamen Rider figures. 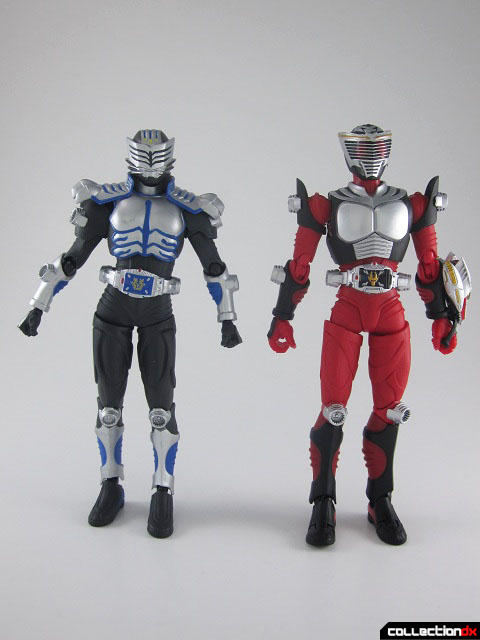 One thing I have to give to Max factory is that they do a good job at hiding most of the joints of the figure, making the figure look less like a toy. For example, the upper leg joints are covered by a soft rubber material, which was also used for the abdomen/lower back section of the figure. 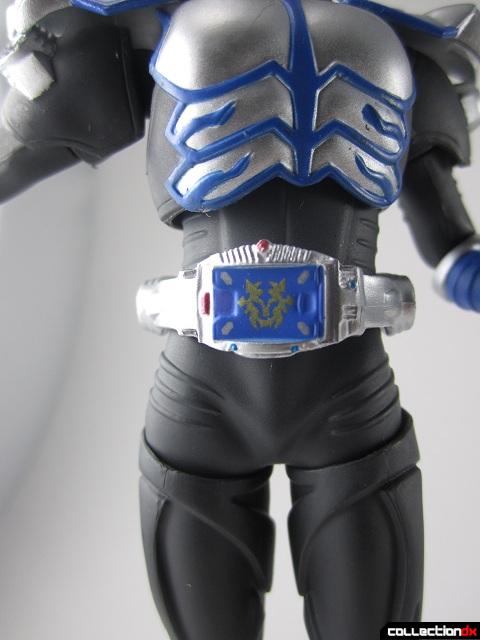 This was a nice touch because not only does it cover the joints, but it also feels like what I assume the rubber suits the actors wear must feel like.

The only joints that I thought detracted from look of the figure are the knee joints. These joints are not visible from the front. From the back, however, they look like little wheels sticking out of the back of the knees. 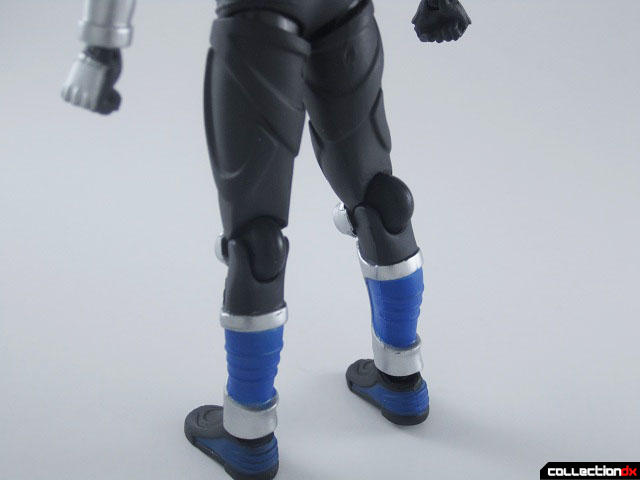 Just about all of the pieces for this figure are molded into place, which means you can’t remove the Advent Deck, or the grey nubs from the figure. I did have an issue with one of these grey nubs, the one on the left knee of my figure molded a little bit funky and did not come out like the circle that it should have been. 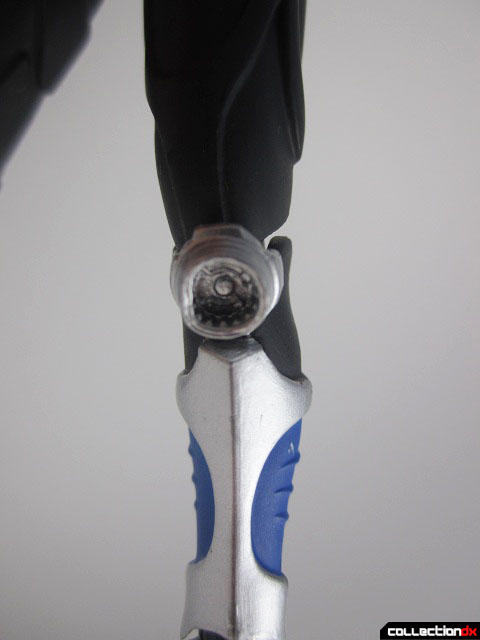 The articulation for Kamen Rider Axe is good, but is a step below the Kamen Rider Ryuki S.H. Figuarts releases. The range of motion for the head, arms (no bicep swivel), and feet are a little lacking by comparison.
The shoulder pads, which are pieces of soft rubber that attached to the main body, limit the range of motion of the arms because they restrict the shoulders. 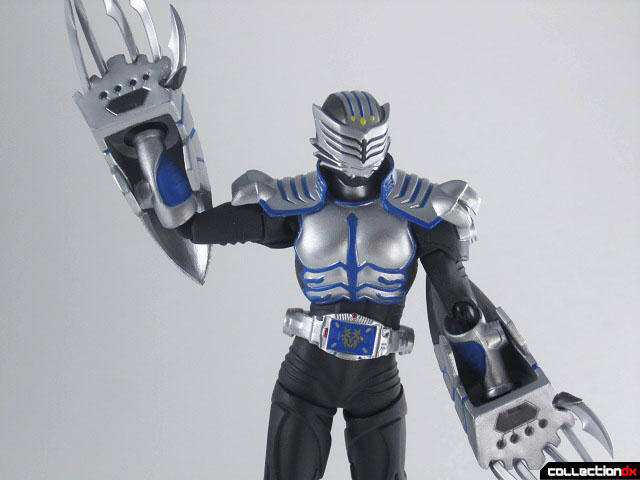 Kamen Rider Axe comes with his trusty axe, from which the writers of the American show must have derived his name (I still like Kamen Rider Tiger better). 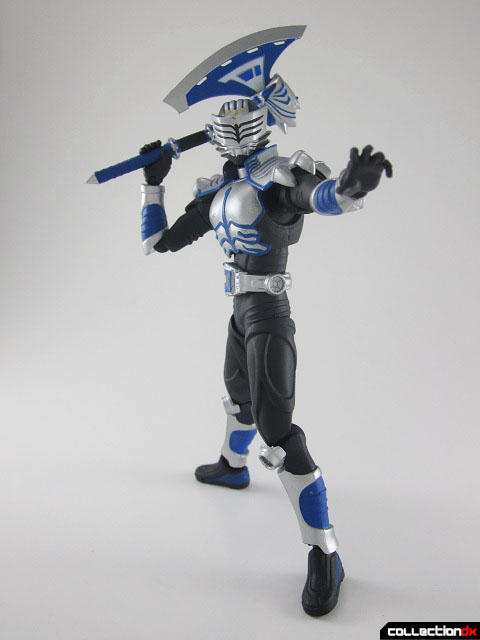 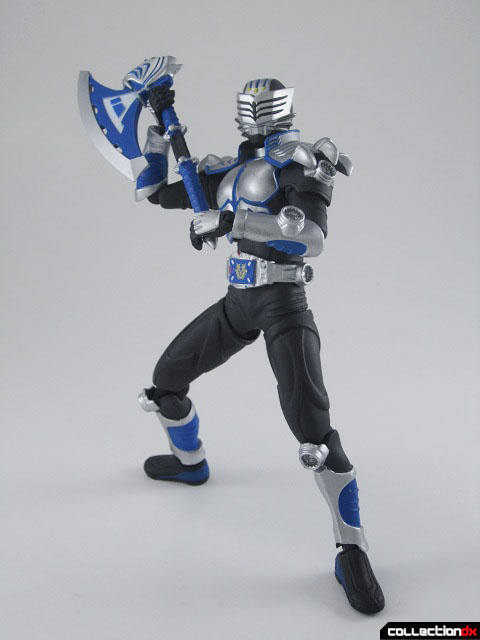 It is molded in two parts: the body and the blade. 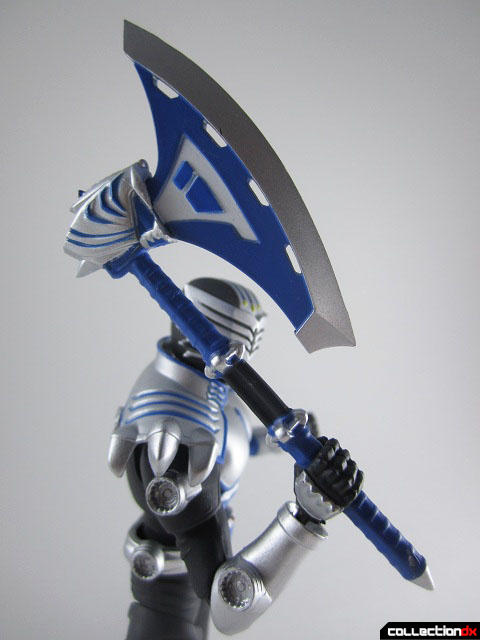 In the show, the axe of Kamen Rider Axe also doubles as his card inputting device. The head of the axe shifts up to reveal the place where Axe loads his Advent Cards into.This toy does not have such a feature.

Axe also comes with his claws, which he summons using his Strike Vent card. 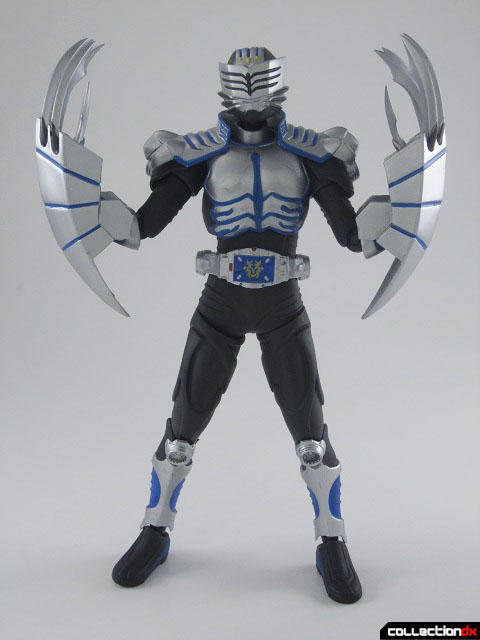 The neat thing about the claws is that each one of the blades is individually attached to the hand by a ball joint, so you display him with varying degrees of claw extension. 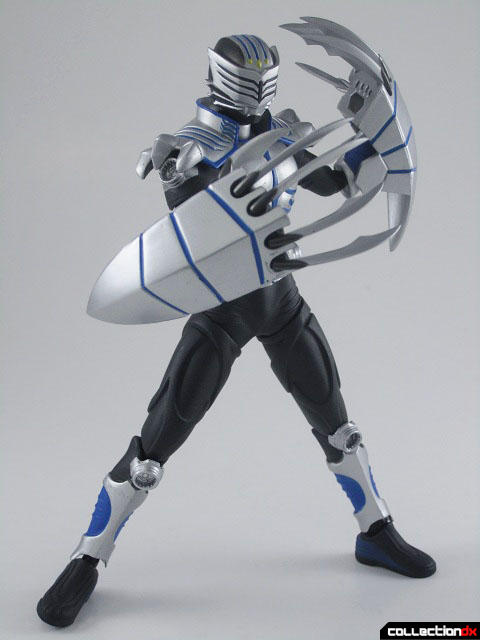 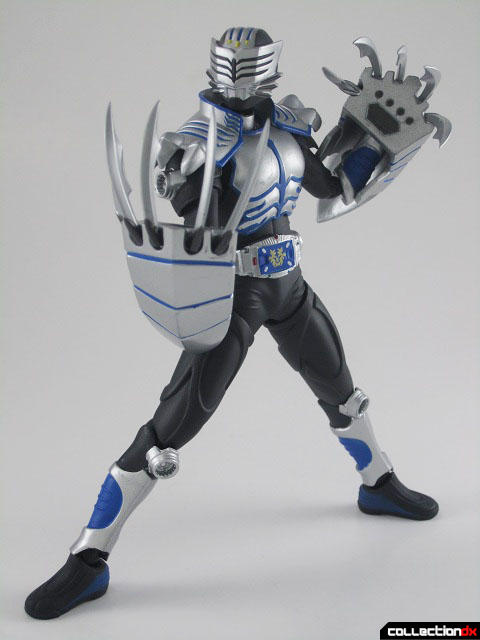 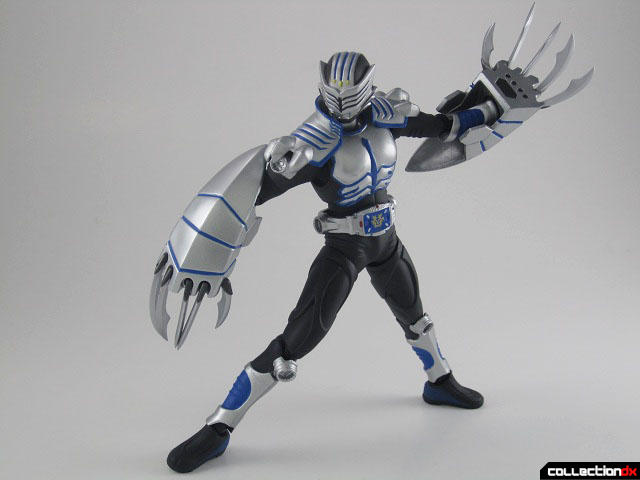 Also included in this release, is an Advent Card for Axe.  It is made of  a thin, molded plastic, with the design painted on the front. In terms of show accuracy, however, the design is a just a painted approximation of what the cards look like on the show. On the plus side, the colorful detail of the Advent Card is visible to the naked eye, unlike the Advent Cards that were included with the S.H. Figuarts Ryuki figures. 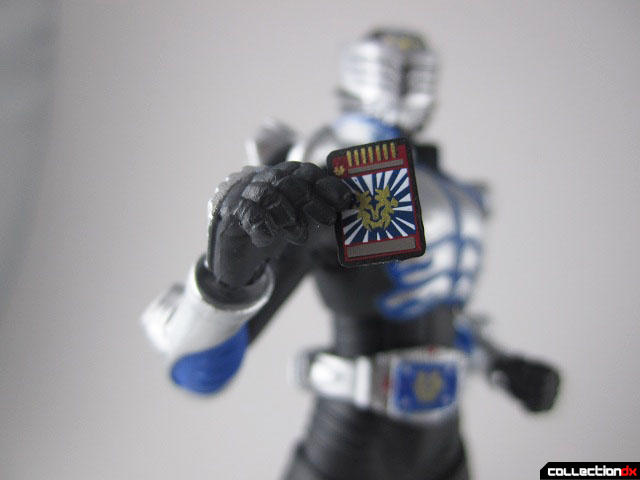 Also lacking from the Advent Card is the design on the back of the card. 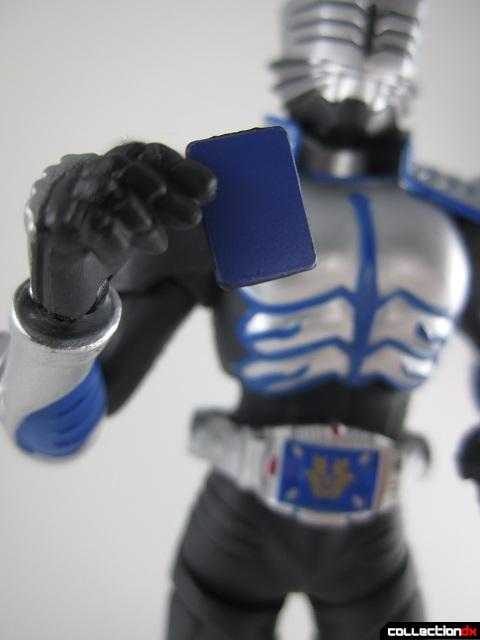 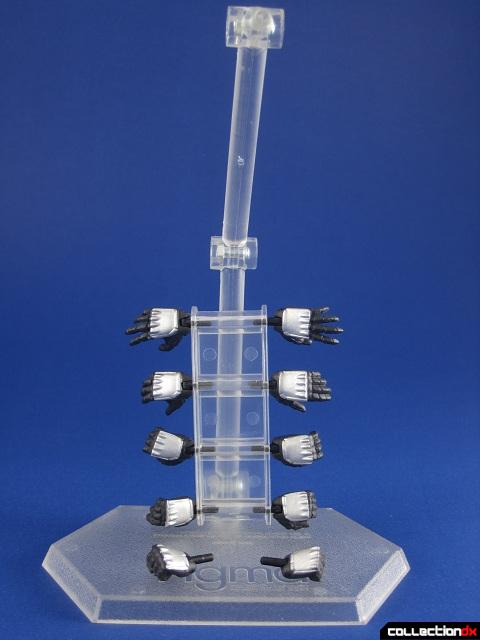 Axe also comes with a stand that plugs into a hole in his back. 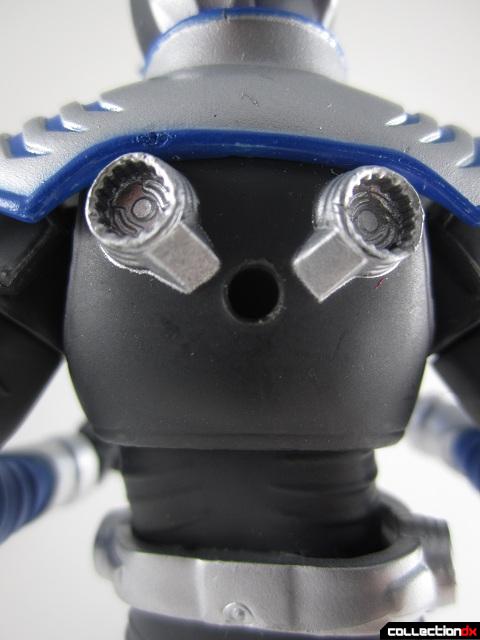 While trying to plug the stand into the back of this figure, I noticed two things. The first was  a design oversight, they made the nubs a bit farther apart than they appear on the show. Also, the tabs on the nubs are pretty huge! 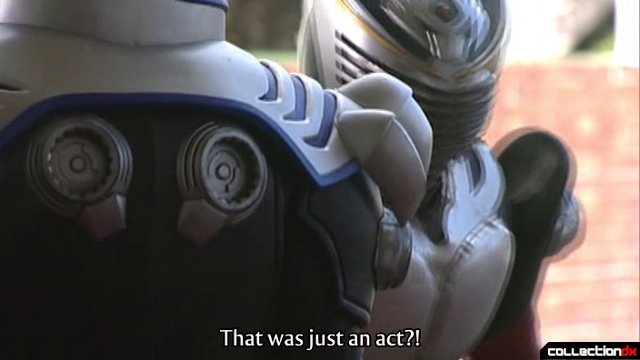 The other thing I noticed  was that thay they made the hole on the figure a little to small, because I had one heck of a time tying put the peg of the stand into the hole. But once I did, it allowed me to get some cool aerial poses with Axe. 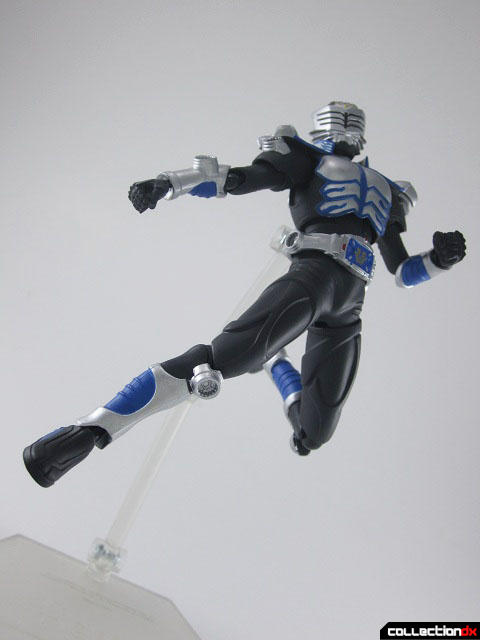 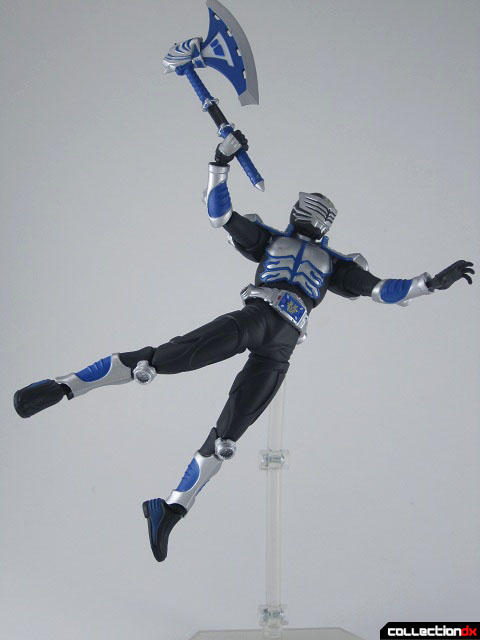 Last but not least, Axe comes with a little Figma branded zip lock bag. Which is great for holding all of the contents of the box, should you choose to throw it away (not me though, I am a box hoarder.) 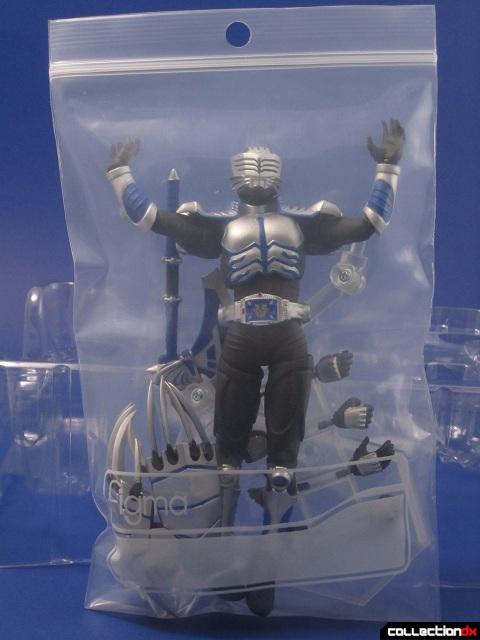 Max Factory did a decent job when they released Axe last year.  However, since then, Bandai has begun releasing their own Kamen Rider Ryuki S.H. Figuarts, which have pretty much one-upped Max Factory’s releases in just about every way. So if you want the definitive version of this character, just wait till Bandai puts out their version. On the other hand, if you just want a toy to fiddle with, the Figma release fits the bill. I have seen these go for fairly cheap , so if you can catch a good deal on them, it would be an inexpensive way of recreating your own Kamen Rider War (or the equivalent story from Kamen Rider Dragon Knight). 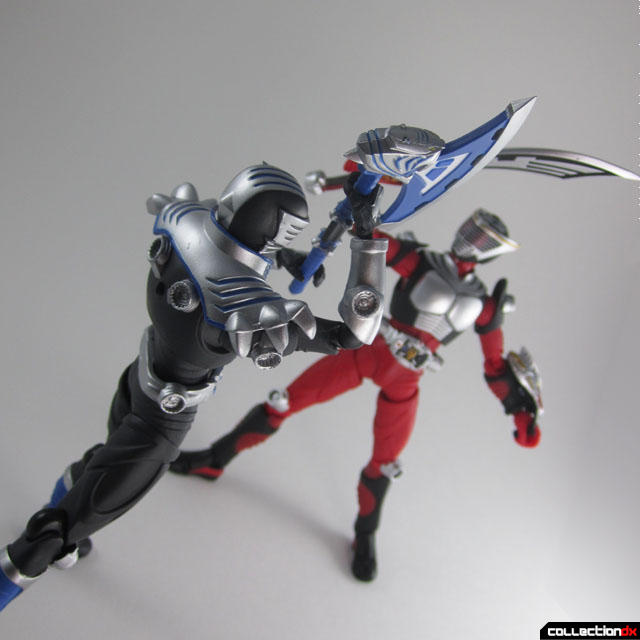 Yeah, SHF Taiga was already shown at Tamashii Features 2012. Still, the figma is pretty decent, and I've seen it for as low as 400 yen on Mandarake. It's great for anyone looking to get them all now, but it's a bit of a pain for people like me trying to get rid of them.

Yea. They have gotten pretty cheap. I almost impulsively bought a whole bunch a while back, but decided against it because the S.H. Figuart releases starting to pop up.

Hope you can find a good home for your Figmas!

While I wholeheartedly believe that the Figuarts are superior, a lot of people will get the Figmas instead because of how cheap they're getting. However, out of the 3 Figmas I have, 2 are really cool. And one is absolutely awesome. Of course, one of them is the bane of my existence. So yeah, I guess it just depends on what people are looking for. The Figmas look great, and if that's all that matters, it's fine to save a couple of dollars instead of the Figuarts. Especially since a lot of the Ryuki Riders are going to be Exclusives.

So that was a rant.