The multiple timelines presented in the main Muv-Luv trilogy take common characters archetypes seen in Japanese media and push them to the extreme by placing them in increasingly desperate situations. No more is this evident than the role Kagami Sumika plays over the course of the main trilogy. In Muv-Luv Extra she is introduced as Takeru's next door neighbor and childhood friend. Sumika is often chided by Takeru for being too stubborn and headstrong, which leads to him incurring the wrath of her patented Drill Milky Punch. Even though the visual novels have multiple paths, you get the feeling that Takeru and Sumika are really made for each other and that their ending is how things are meant to be. When Takeru awakens in the alien occupied Earth of Muv-Luv Unlimited, Sumika is nowhere to be found. Memories of her are Takeru's only connection to his old world and as the story progresses he still holds out hope that they may someday be reunited. 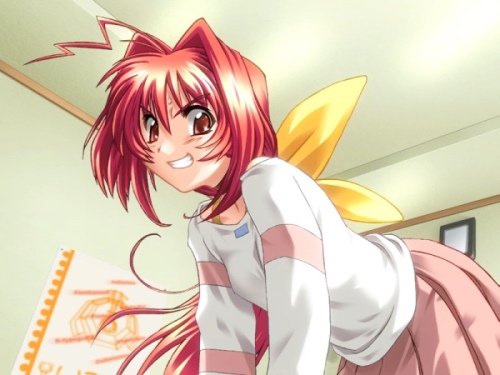 It's her winning smile that keeps Takeru fighting to set the world right.

In Muv-Luv Alternative, Takeru is placed back at the start of the story of Unlimited but is armed with enough knowledge of the future to try and change the world for the better. Now driven to put right what once went wrong, he is given the shock of his life when suddenly Sumika reappears as the pilot of the massive anti-BETA assault craft, the XG-70 Susanoo. Now acting as the linch pin in the UN Army's attempts at eradicating the BETA, the girl next door is no longer just the love of Takeru's life but a potential savior to all mankind. I won't get into many more details as Sumika's return is really something you need to read to believe. 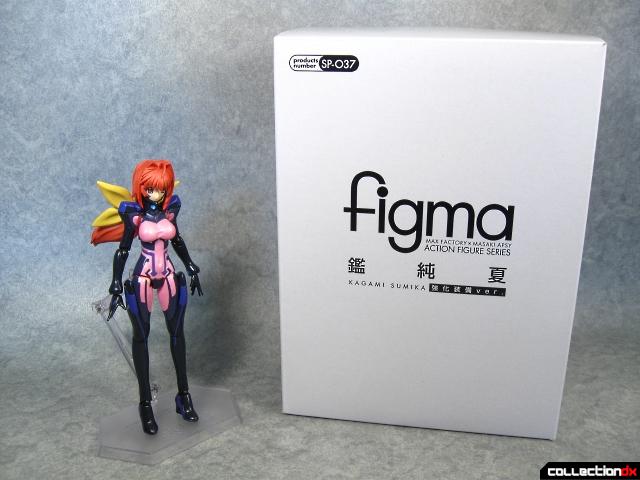 Kagami Sumika was the second Muv-Luv Figma ever released but she differs from the other three as she was only available as a special pack-in item with a premium version of Muv-Luv Alternative's X-Box 360 port. You see in Japan, the X-Box 360 is truly the console for otaku. The box she comes is rather plain but still has enough information on it to denote its contents. Max Factory had done a number of these limited release Figmas so Sumika has an "SP" in front of her product number.

A lot of Japanese online retailers like Jungle Shop or Mandarake have the Sumika Figma for sale without the game so it easy enough to acquire one. For whatever reason my figure was held up in customs for about a month but eventually arrived safe and sound. 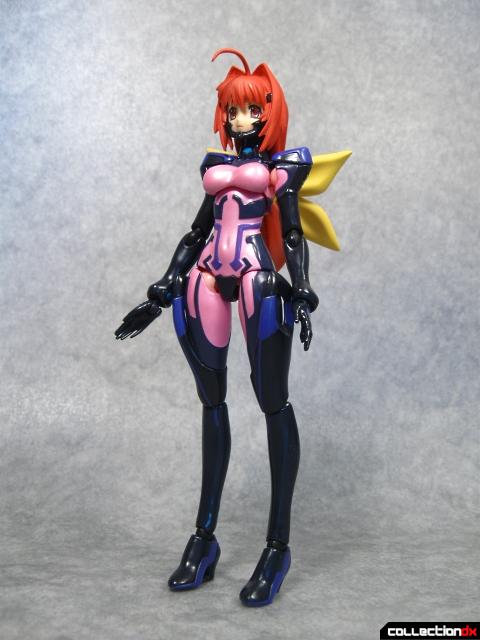 Sumika comes clad in her custom extra girly Fortified Suit. At a little over five and a half inches tall, she is the shortest of the Muv-Luv Figmas. 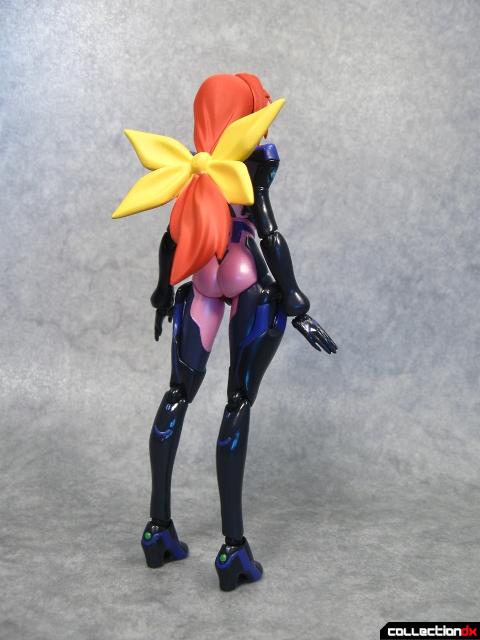 She can stand unaided but is top heavy due to her long hair and massive yellow bow. 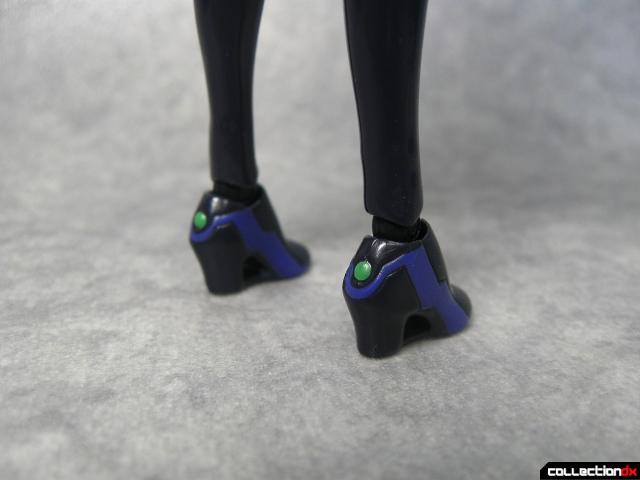 While Sumika's outfit has little surface detail than the others, there is lots of little paint apps to highlight what must be highly advanced equipment embedded in her Lady Gaga style footwear. The hollowed out heels are kind of neat but leave her with a small footprint. 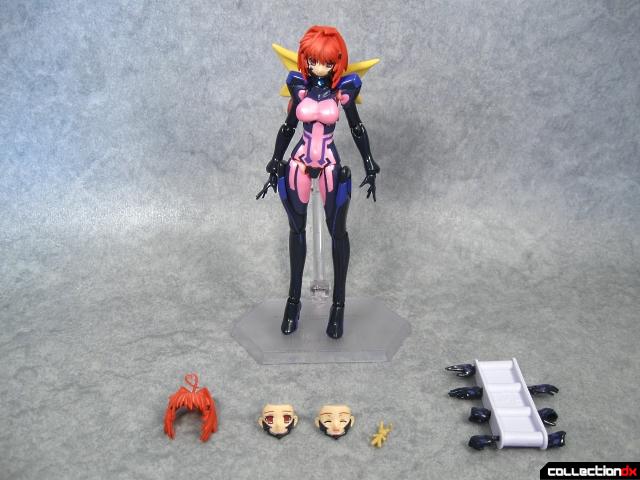 Sumika is as minimalist as the other Muv-Luv Figmas when it comes to accessories. All you get is two extra faces, a rack of hands, a tiny rabbit charm, an alternate hair piece, and a stand. Again since this is her dressed up to pilot a giant robot, she didn't really need any additional weaponry. 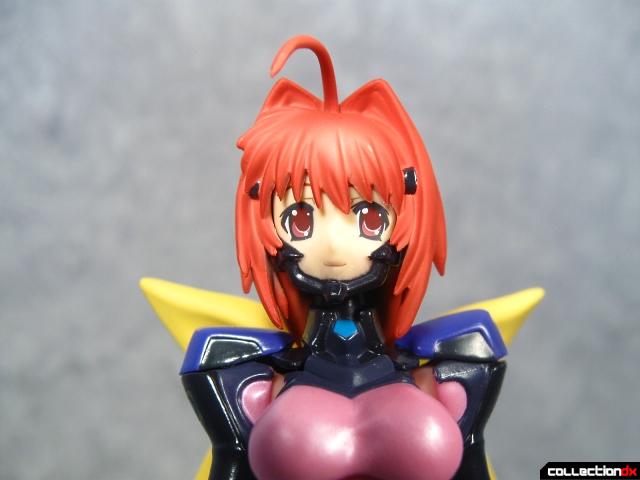 Sumika's default face gives her a tiny smile and eyes that are looking slightly off to the right. In the visual novels she is usually looking at the Takeru like this so the figure is just trying to capture that appearance. Her single errant tuft of hair (ahoge) is faithfully reproduced. 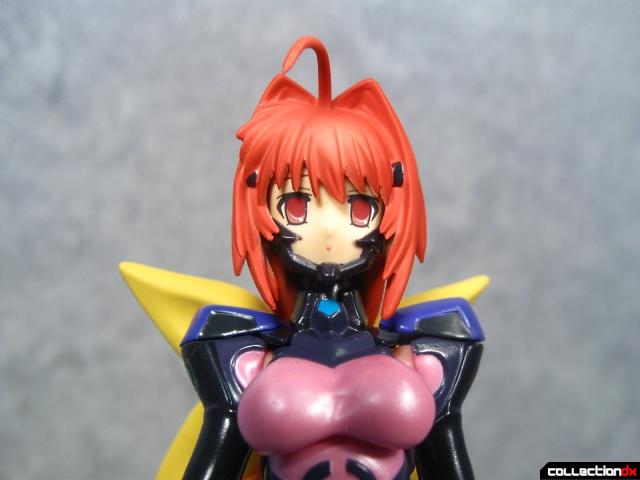 Her second face is an ominous blank stare. It's best not to think too hard about this expression. 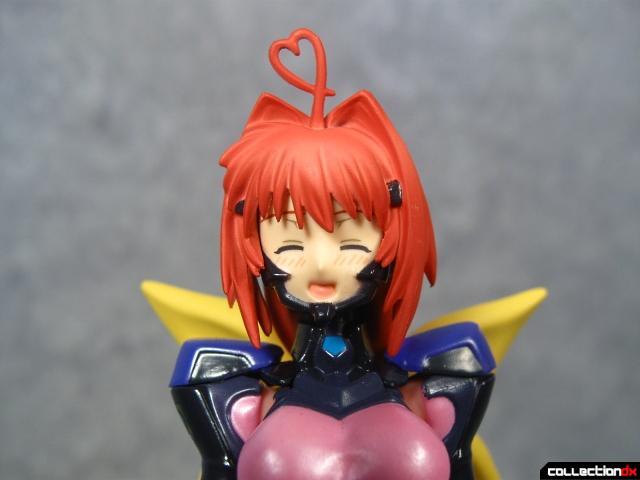 Lastly, Sumika comes with a happy open mouth grin. This face is best matched with the alternate hair piece with the exquisite heart-shaped ahoge. 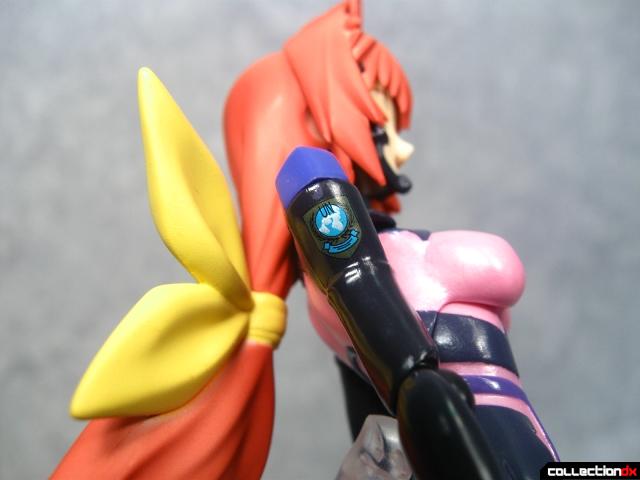 As a member of the UN Army, Sumika's Fortified Suit has the official emblem on her right arm. 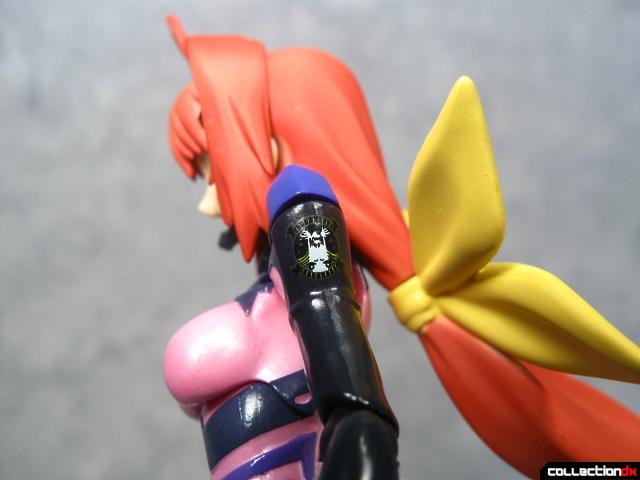 She is also a part of the Special Task Force A-01 Valkyries and has the appropriate squadron patch on her left arm. Detailing wise this version of the patch is a lot simpler and appears to reflect the "all ages" nature of the console port. 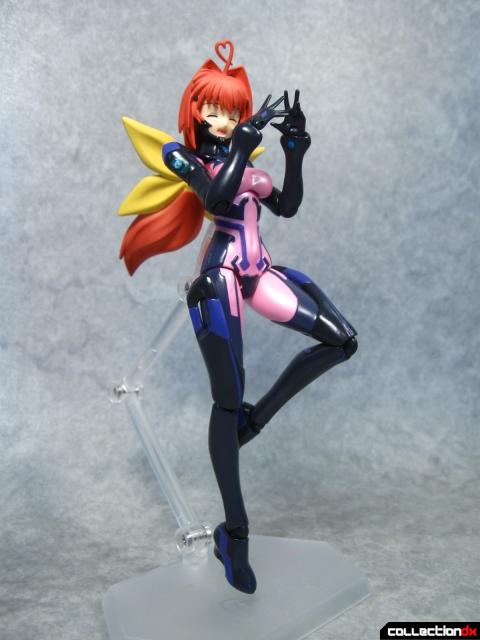 Articulation wise, Sumika fares better than the other Muv-Luv Figmas is some places but worse in others. Her ankles are unhindered by bulky combat boots so she can point her feet up and down effortlessly. However her bulky 80's businesswoman shoulder pads means that the double-joints in her shoulders are mostly wasted as she can barely splay her arms out to the side. Still her upper body moves freely on a ball-joint and her legs can move well enough to let her exude that girlish charm she's known for. There's even some swivel action where the top of her bow meets the rest of her hair so the whole assembly can move parallel to her body.

Also this is another Figma where the stand would not attach to the hole in her back right out of the package. Since she comes with an extra adapter, I just sanded down the peg on that piece and it works much better now. 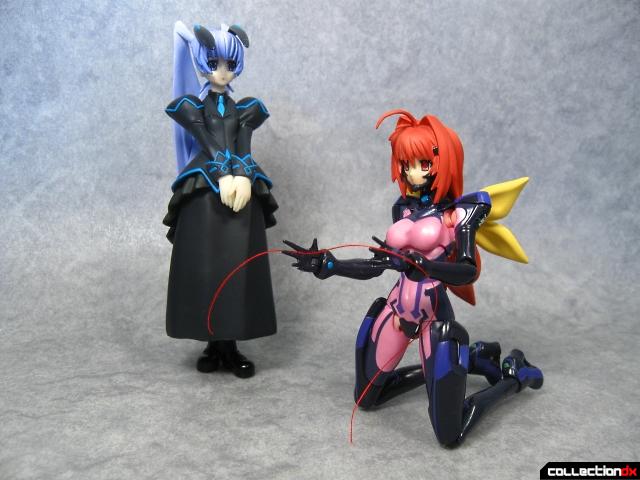 Sumika can even sit down with Kasumi to practice her cat's cradle. 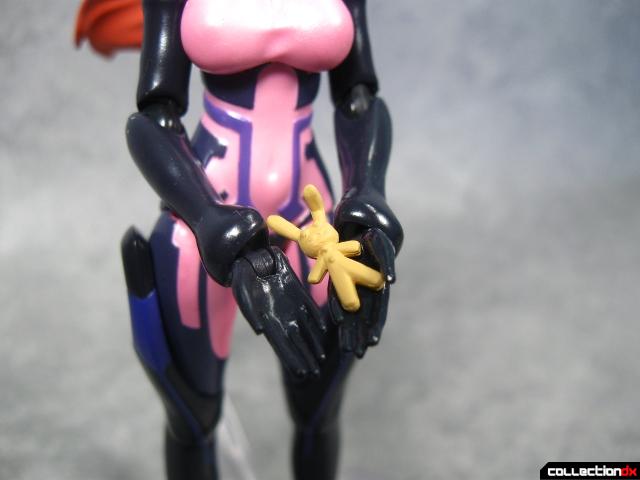 She comes with an absolutely tiny in-scale version of the rabbit charm Takeru made for her as a gift. It doesn't attach to her hands so I would be extra careful if you choose to display her holding it as it's so small and easy to misplace. 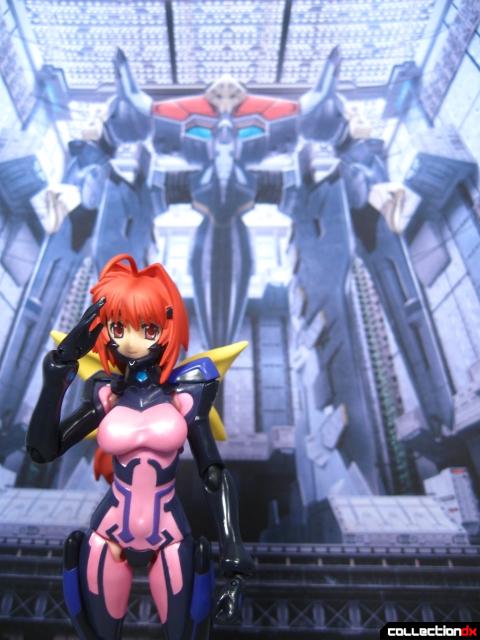 She is the proud pilot of the massive XG-70 Susanoo, which is a veritable floating fortress among the UN Army's arsenal. It is filled to the brim with enough weaponry to eradicate an entire BETA hive all on its own! 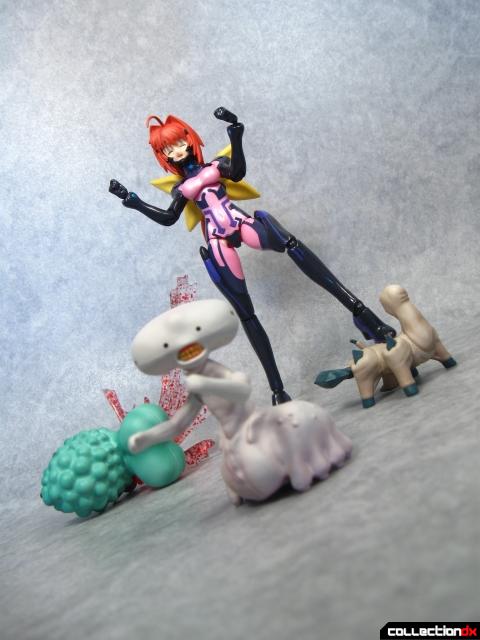 Eradicating the BETA is something Sumika takes extreme (and almost sadistic) pleasure in doing. 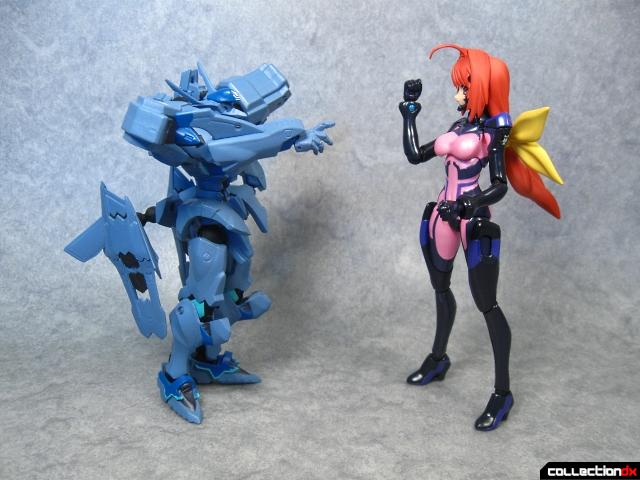 "Sumika! You need to stick with the group and not strike out on your own! Remember how you fainted in your first battle?" 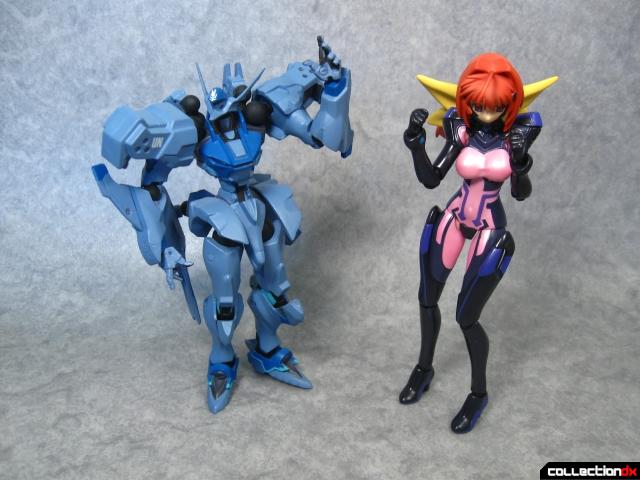 "Honestly now! I can't keep carrying you back to base every time you faint! I thought idiots were supposed to be lighter!" 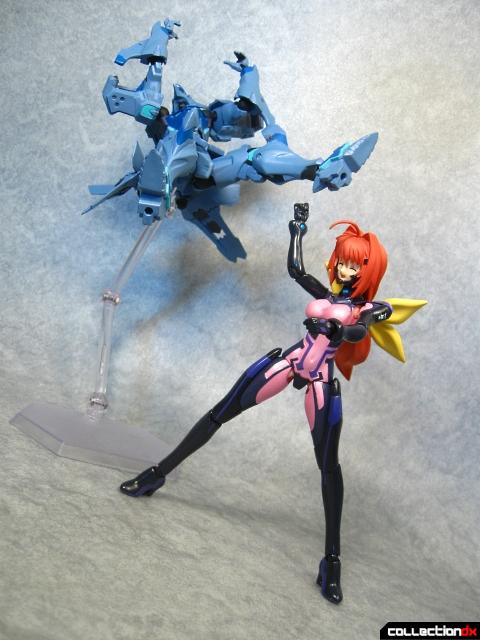 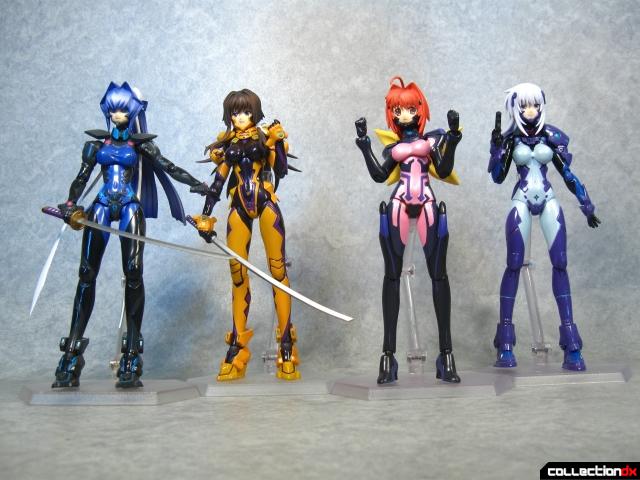 I am glad to have all four of the Muv-Luv Figmas as they look quite good together. Only Symphogear has surpassed this much pride and dignity with silly outfits.

The Figma of Kagami Sumika is an excellent representation of Muv-Luv's most important heroine. Her premium release means she does come with a bit of a price as most boxed examples out there go for 4,000 to 6,000 yen on the secondary market. Granted there are plenty of fixed pose figures of Sumika in her Fortified Suit, but if you want an articulated toy this is the only game in town. Despite some flaws in the articulation, it is still a very attractive piece and well worth owning for fans. 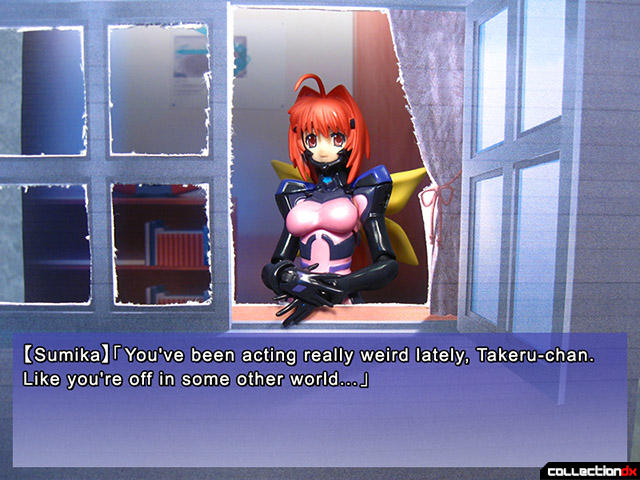 And now thanks to this Figma and the Sumika window diorama, I can recreate the true Muv-Luv experience. After setting up this display, I asked myself if my entire Muv-Luv fandom has been leading up to this moment and the answer is...

3 comments posted
It even has the love ahoge!

And the dead eyes face too! This looks like a really great release. Still, I'm not sure if this would be a buy for me, since I like to pose my figures in action poses, and I'm not really sure what I would do with her. Besides have her look out a window and have heart get broken by a blind idiot.

Looking back on the other Figmas, it seems like Yui Takamura turned out to be the best in terms of articulation. I guess if you found a gun that fit in Sumika's hands she could do a decent action pose. I always love it when a Figma comes with holding things hands even when they don't have anything to hold :3

"Besides have her look out a window and have heart get broken by a blind idiot."

That is indeed a rare gimmick for an action figure.

"I always love it when a Figma comes with holding things hands even when they don't have anything to hold :3 "

Are you saying you don't buy other figmas only for their guns?