I was 13 years old in 1986. Like most 13 year olds, I was desperately searching for identity. I played with my star wars toys for much too long (according to my parents) and suddenly I was struck with the desire for less childish things.

For a period of time, skating defined me. That wooden board with wheels granted me a freedom I had not yet experienced. And with the skating I adopted the skate lifestyle. I read Thrasher magazine, and I bought Vans shoes. And of course, I started to listen to skate music.

At the time, Thrasher was my bible, so when Thrasher talked about bands like Dead Kennedys, Suicidal Tendencies, Circle Jerks and the Misfits, you know I went right down to RRRecords and bought the tapes. I’d spend my days skating through downtown Lowell Massachusetts, hanging out with other skaters who were much better than me. It was the first time I ever felt accepted by a group, while at the same time feeling like an individual. I discovered so many things during this period of my life that still resonate with me today.

It was during that time that I was introduced to the Dead Kennedys, a punk band from California. My first DK tape was “Bedtime for Democracy”, which I played to death. It was the perfect skate soundtrack; full of aggression and sarcasm. It also marked the beginning of my political awareness because half of the songs were about something called “Reganomics”. I remember that the tape cover had what seemed like a million pages with things to read – lyrics, fake news items and the like. Sadly, the Dead Kennedys broke up due to a lawsuit shortly after that album was released. Over the years I enjoyed discovering their back catalog, but I was always bummed that DK was no more.

While the band had broken up, the lead singer Jello Biafra began a career doing spoken word. His sarcastic wit echoed my growing cynicism, so I followed that career as well. I got into the band LARD, which was a collaboration between MINISTRY and Jello Biafra, and I even dug when Jello teamed up with DOA.

Suffice to say, I am a Jello Biafra fan.

With that background out of the way, I bring you this review of the Jello Biafra Throbblehead from Aggronautix. While I hate bobbleheads as a rule, I make an exception for this line. See the Mojo Nixon release for the reasons why. 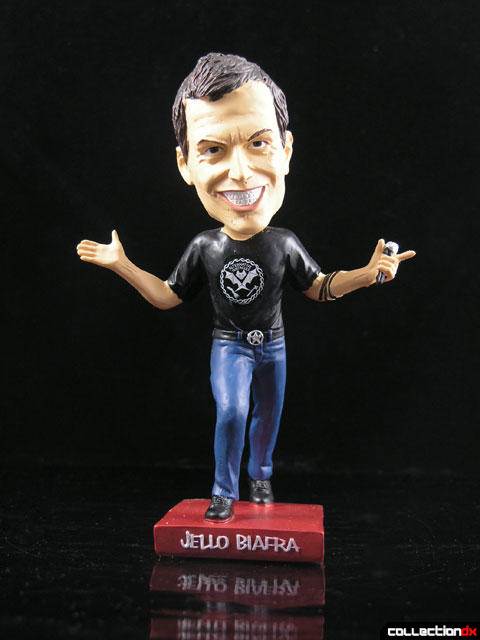 The box is a sturdy thick cardboard with great graphics on all sides. Where many companies simply repeat the same image over and over, each side has unique, individual art. 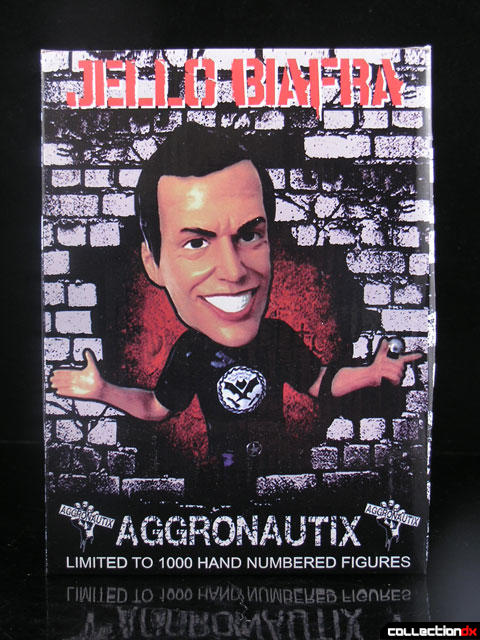 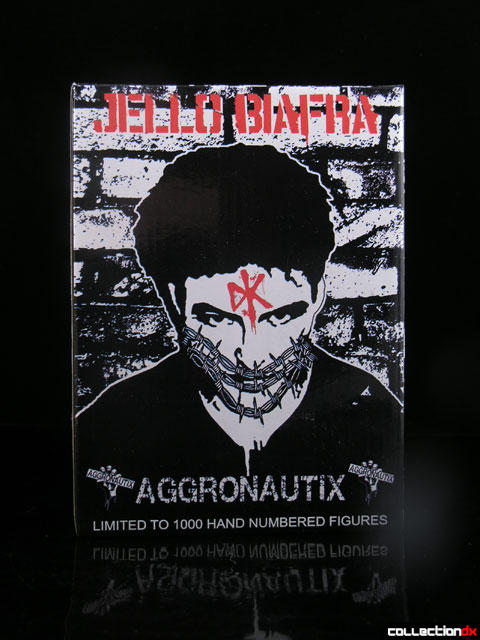 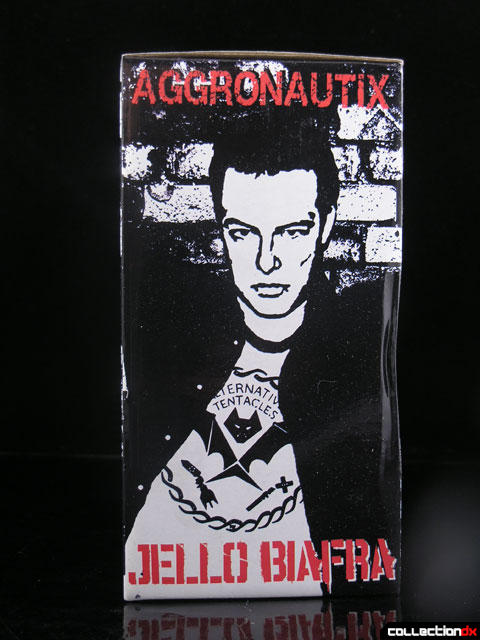 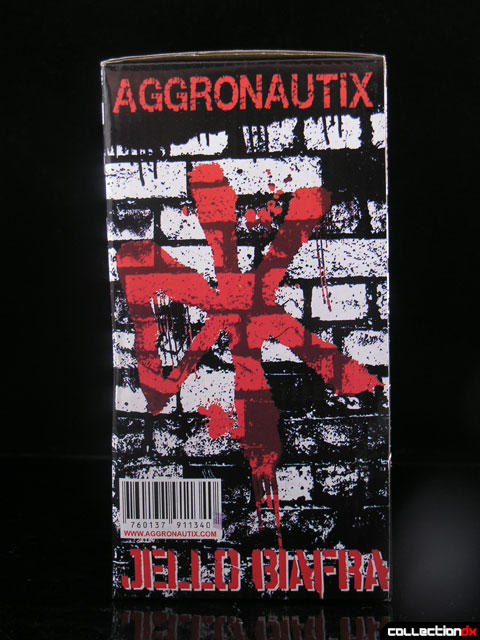 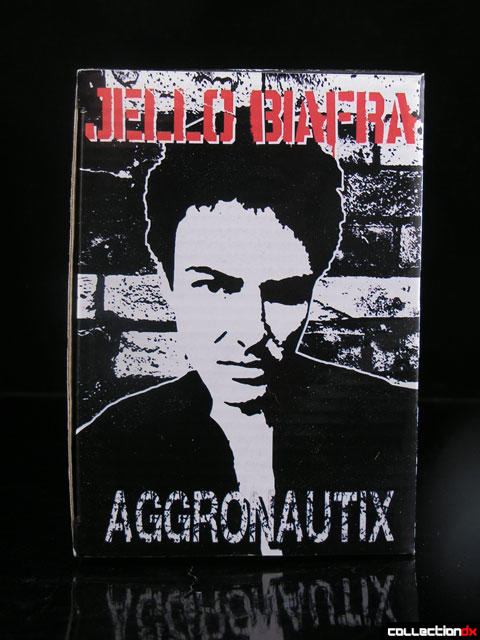 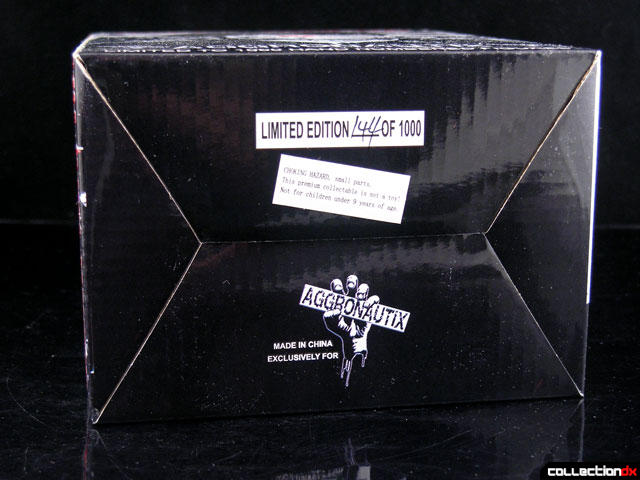 Inside, the figure rests between two slabs of Styrofoam. 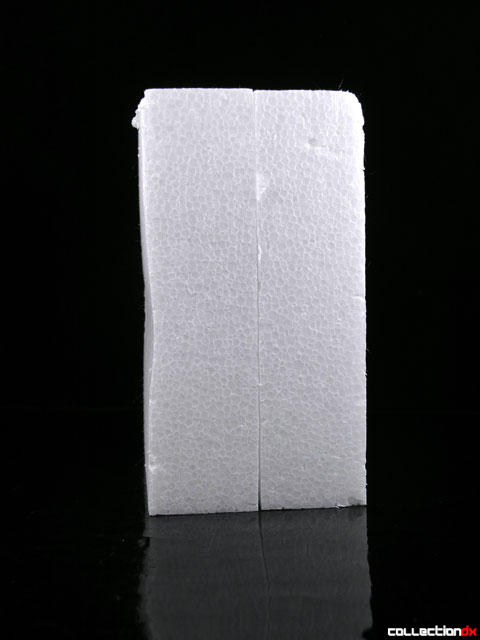 If you read the Mojo Nixon review, that you will know what to expect of the quality of this figure. Like the previous release, it’s rough. However, considering the subject matter, I think it’s appropriate. 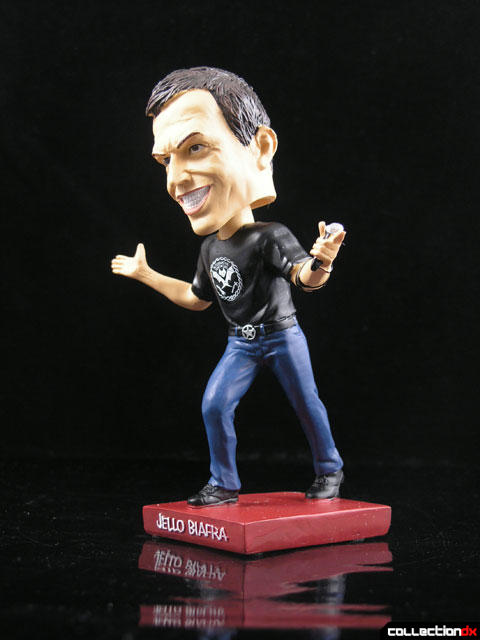 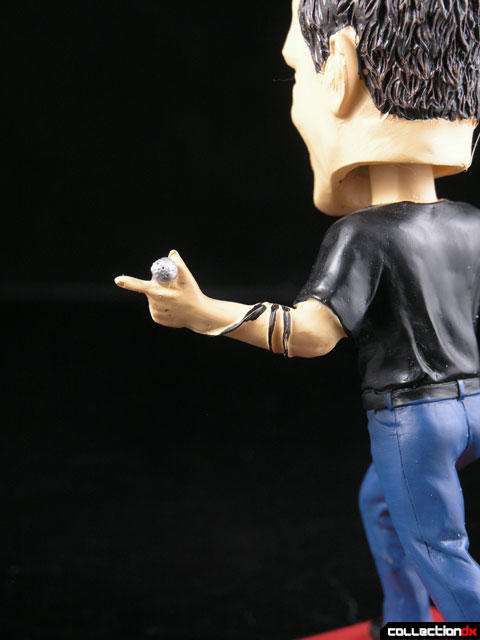 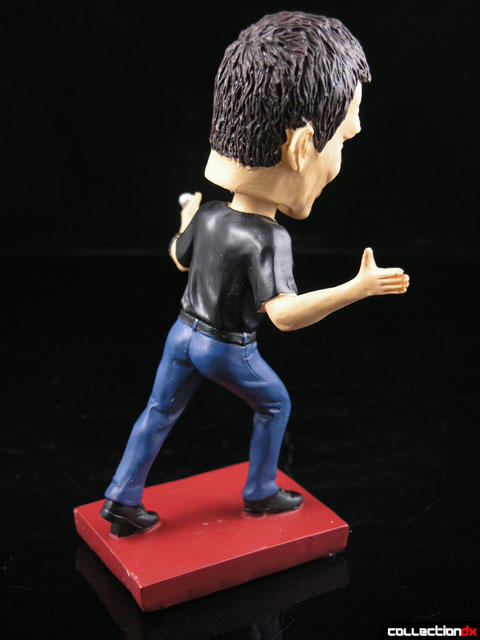 The sculpt is a decent likeness of Jello Biafra in his younger days, but I’m not so sure about the expression. He seems too happy here. However when viewed at a certain angle he gives off a sinister glare. 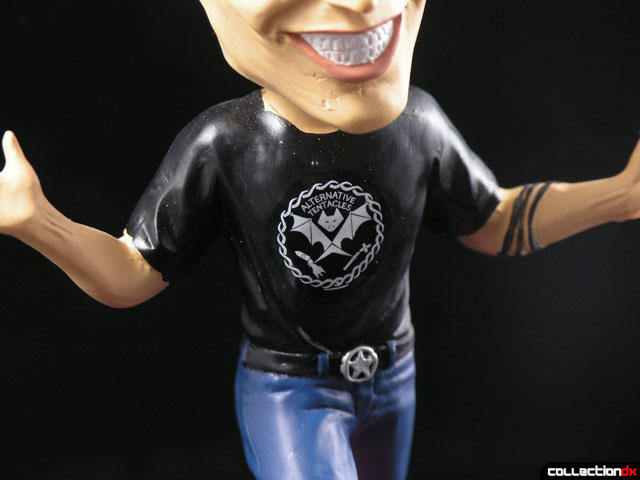 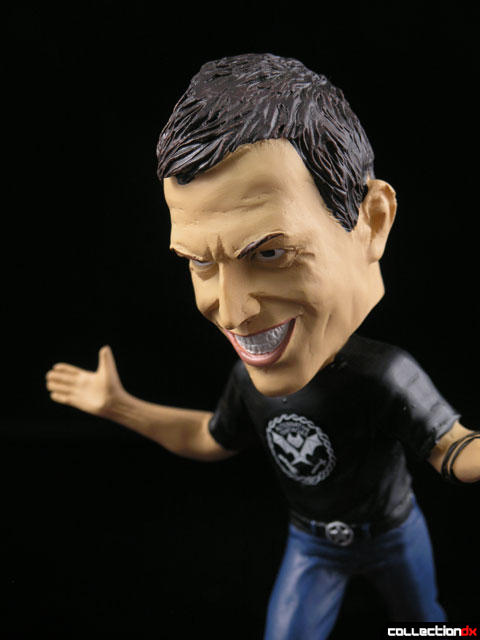 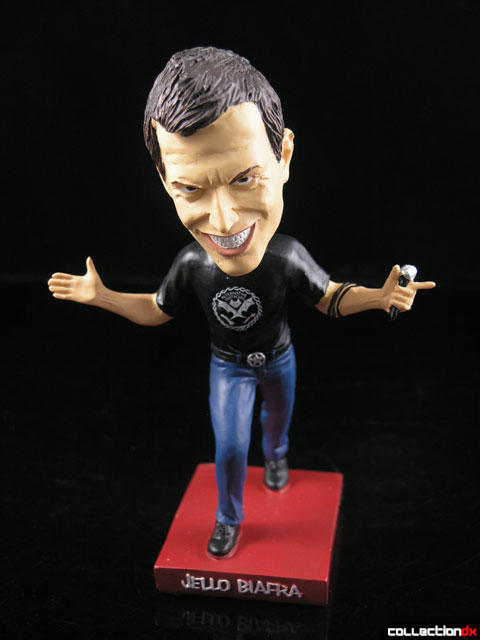 Jello Biafra Throbblehead comes at you from Aggronautix.com, and is available through their web store or wherever punk records are sold. 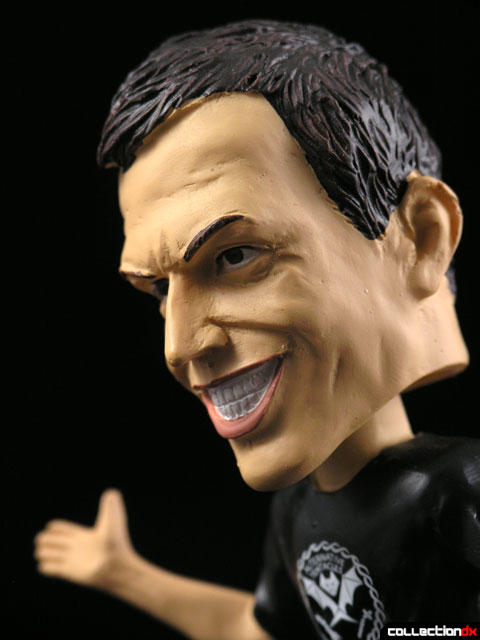 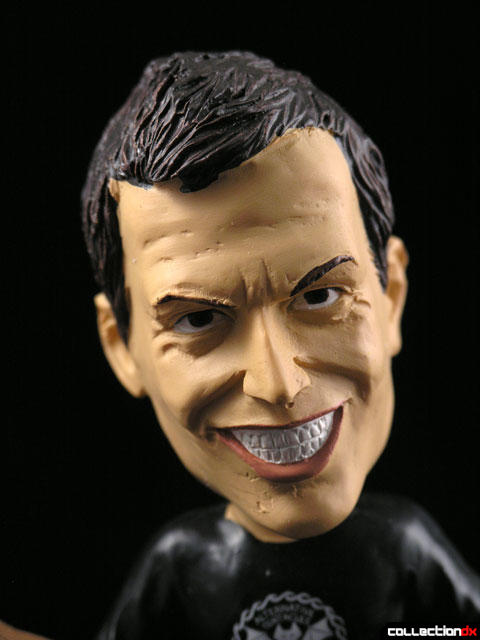 if there's one thing I never thought I'd read on CDX, it's a reference to LARD! dag that's awesome!

DK totally blew my mind when I first heard it. So unlike many of the punk cliches used in today's "punk." Like mad effects on the guitars when everyone else was doing the Minor Threat thing of just a guitar in an amp, or a distortion pedal at most. And their records are quite good recording quality when the norm for punk records what boombox style... yet they still cut through your speakers like a buzzsaw. It's craft of song and recording that make these records stand the test of time; like a good toy, you put some love and care and thought into something and it shows.

I share a lot of the same history with punk and skating. The Misfits were a big part of me starting to play music! Their tapes had me searching the library about all the horror movies they referenced. While I listen to lots of different music now, I still hold many of the ideas and thoughts DK put into my brain true to my heart. Doing the right thing is always good, for yourself and others.

This is such a bizarre product, kind of like WATCHMEN action figures; the subject being depicted has a lot of politics that would not normally lend themselves to merchandising. Ironic! Like Mojo though this is something you didn't know you actually wanted until you see someone made it!!

Young music fans -or old ones who haven't checked it out- would be well served, both morally and aurally to give Dead Kennedys a second listen, and learn!

For a period of time, skating defined me. That wooden board with wheels granted me a freedom I had not yet experienced. And with the skating I adopted the skate lifestyle. I read Thrasher magazine, and I bought Vans shoes. And of course, I started to listen to skate music"

Dude, the story of my life, Thrasher , Vans etc. That was me! I still get the urge to skate, but one fall and im done. Skateboarding changed my life as that is how I got into hardcore/punk music and eventually led to starting a band. We come from similar backgrounds and somehow continue along the same route with our collecting. I mean I knew you liked similar music, but I didnt know about the skateboarding part. Thanks for sharing.