Kaiyodo's Revoltech line is still going strong after five years. Anubis is the star mecha from the 2001 video game Zone of the Enders by Hideo Kojima and with mechanical designs by Yoji Shinkawa. This release marks ten years since the game was originally released and fills a long empty void for a Jehuty figure. Konami is also planning a HD re-release of the two games in 2012.

You can pick one up for yourself at HobbyLink Japan (HLJ.com)

The box is your typical Revoltech style. The figure and accessories are held in a plastic clam-shell inside. 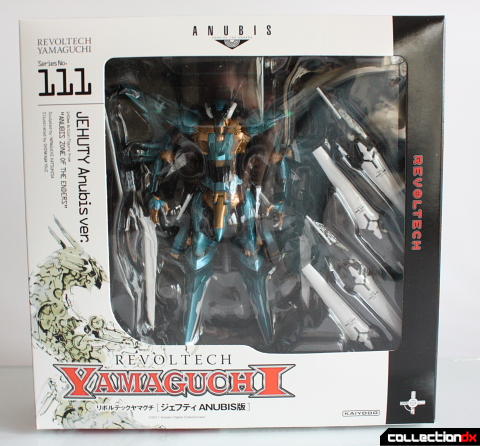 The back of the box has an overview of the figure and its accessories with some nice action poses. 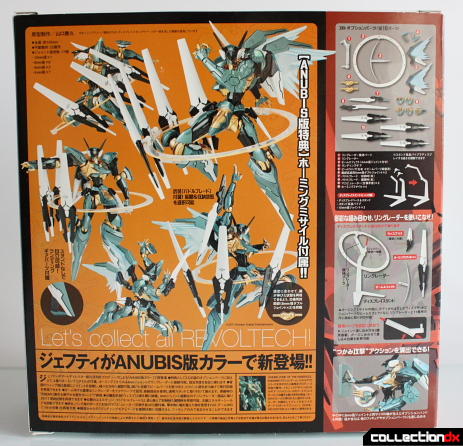 The first thing I noticed is that this figure comes with an opaque grey revo-container and the lack of a revo-coin. The figure is packed with a ton of accessories. 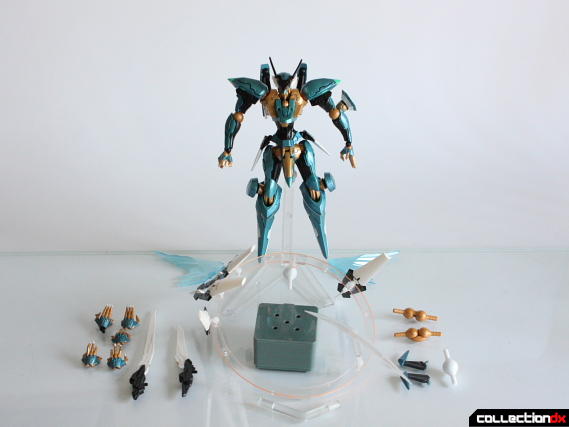 The sculpt of the figure is great and captures the design very well. The figure is painted in metallic blue, gold, white and black with several other accent colors. The paint on my example is the best of any Revoltech figure I own and is almost flawless. There is a lot of sculpted detail and paint filled detail lines. 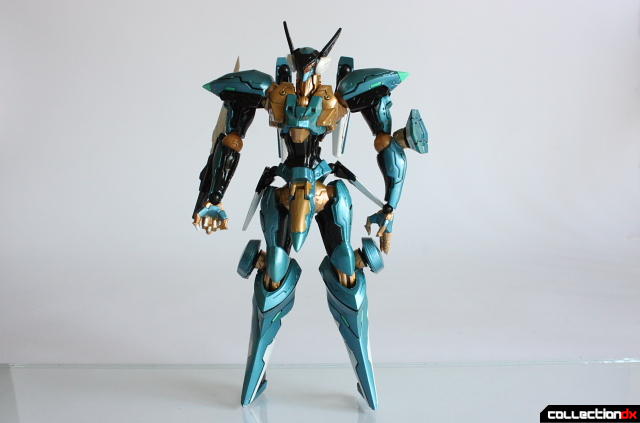 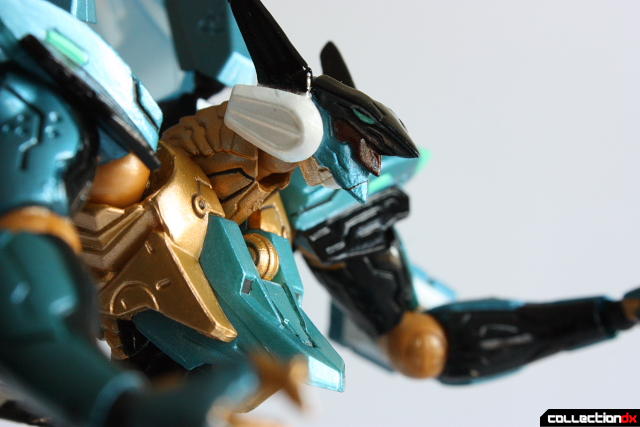 The figure can stand on its own do to replaceable heel parts. The collapsed parts are loose and can fall out on their own. 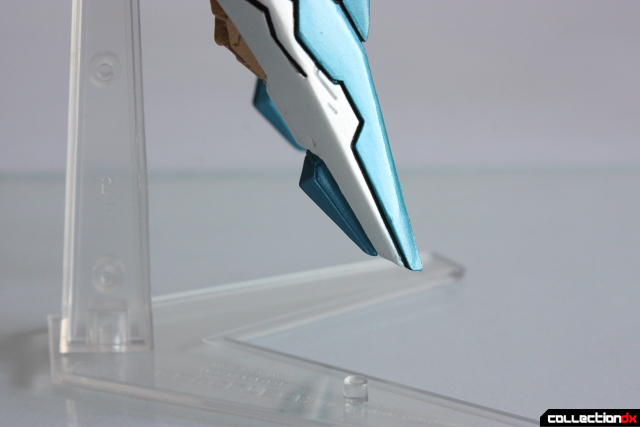 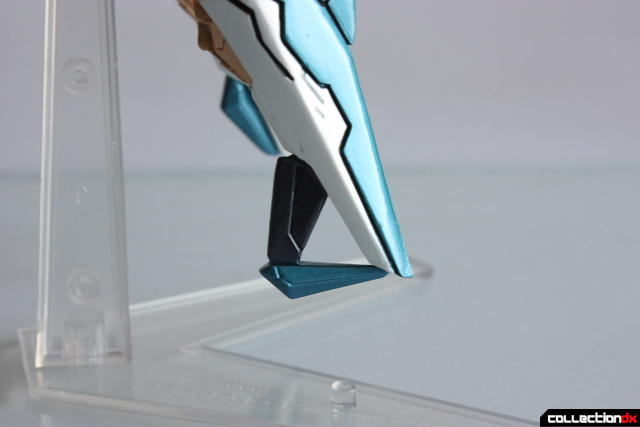 The figure is very poseable but don't bother trying to pose it on the ground. For some great posing use the included (clear) Revoltech stand. The stand includes a navigation ring effect piece and and additional part to attach it to the stand. 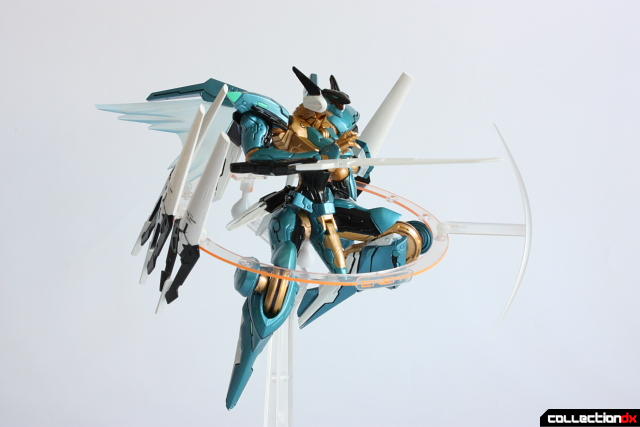 The figure also includes four option parts which are remote weapons from the game and a slashing type effect. They can be attached to any of 10 points on the ring and each have a small Revoltech joint at their attachment point. 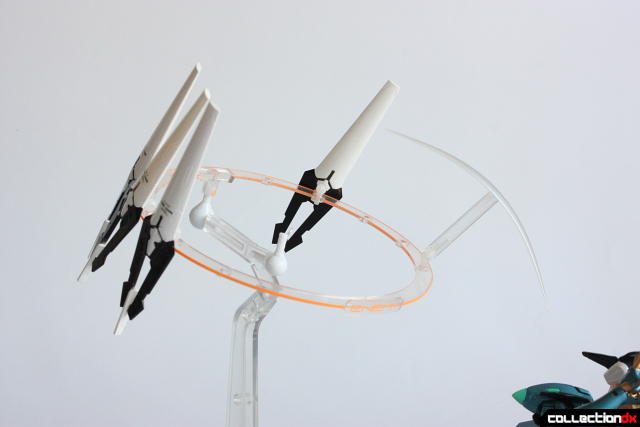 Other accessories include a stowed and deployed sword that can be attached to the right arm. 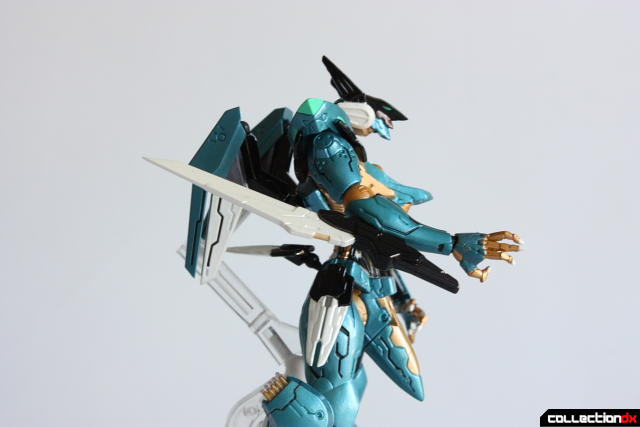 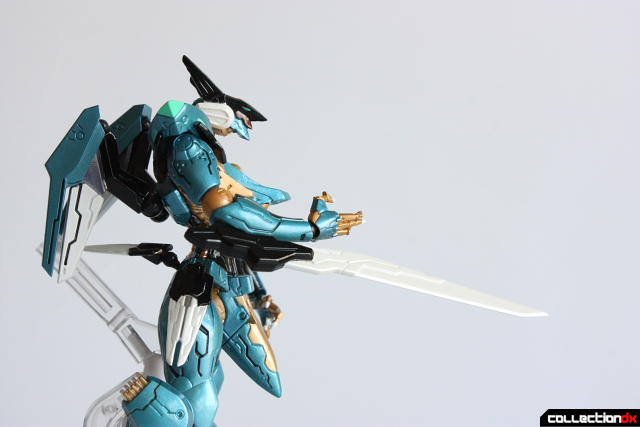 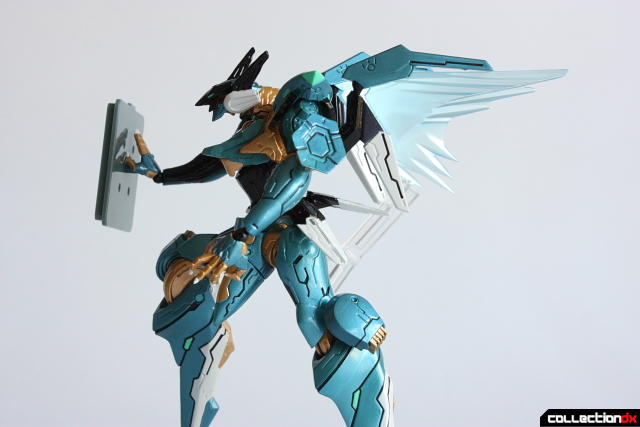 The figure also includes thrust effect parts that can be attached to the boosters on the back. The boosters are attached with a Revoltech joint. 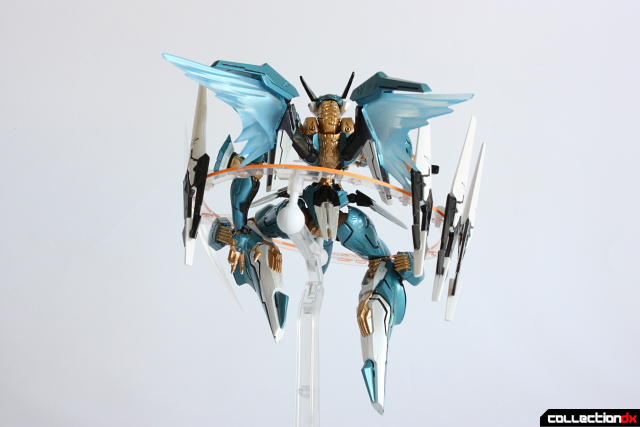 There are also alternate joints for the elbow that offer an extended range of motion. 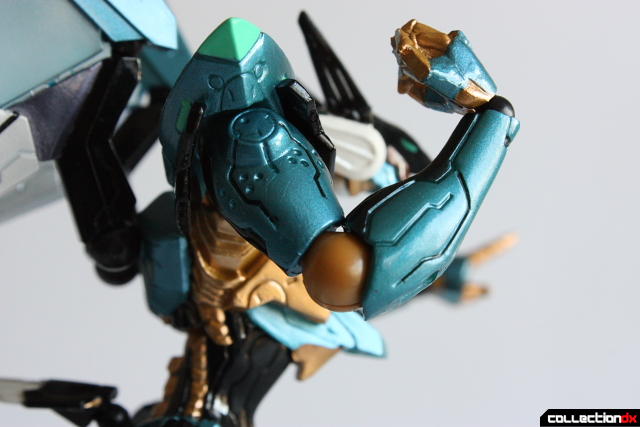 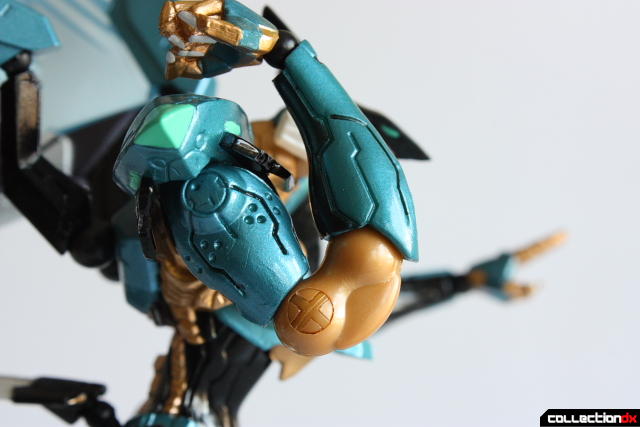 Jehuty also features an additional point of articulation that every figure needs. 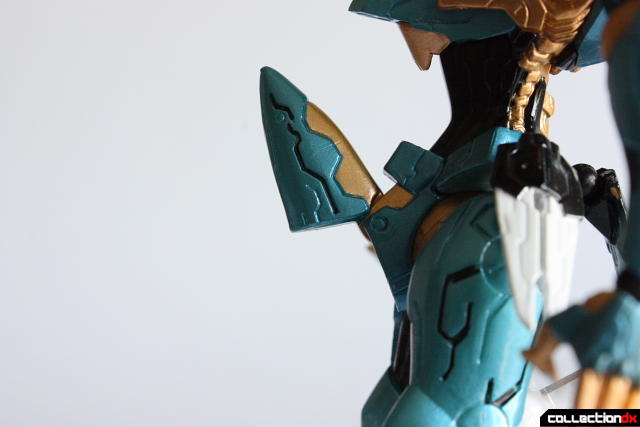 This figure was originally released as Revoltech #103. The paint scheme is different and it does not include the four option parts. The price is the same so I would recommend this figure unless you prefer the other color scheme. Kaiyodo is also releasing Anubis (the villain) this month (Dec 2011) 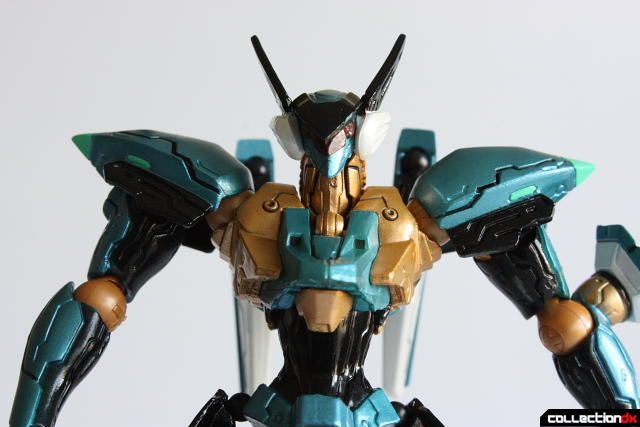 Overall this is an amazing figure. I am blown away by the sculpt, paint quality and articulation. I am impressed by the large number of accessories and appreciate the fact that Kaiyodo decided to give us some character specific effect pieces instead of just giving us the same old "revo-stomp" effect. If you want a Jehuty figure you don't really have any other options and this figure does not disappoint.

You can pick one up for yourself at HobbyLink Japan (HLJ.com)

Jehuty also features an additional point of articulation that every figure needs.

What for, exactly, on this particular figure???

I don't know anything about ZotE, but this looks neat! I really like the color choices; the different blues with the gold just works so well together.

That's the cockpit ( seriously). When Jehuty in flight mode, that thing swings forward.

The weird thing is, the actual Jehuty cockpit isn't articulated like that.

I never played first ZOE but in 2nd game it did fly with the cockpit swings forward (when Jehuty is flying parallel to the ground, or upward in standing position) like that. Maybe a "long range cruise mode" or something. If I remember correctly, it was when Jehuty flying in Mars sky before encountering the huge Bahram fleet (or maybe after, I forgot).

It swings forward, but there's no dramatic break in the cockpit like that. It's a single piece.

Laughing very hard... I know that whenever a ZOE mecha being review..., we get the Cockpit joke... :D

Makes me yearn for another ZOE game . When will Kojima actually grace us with another great game about orbital frames?

Zone of the Enders is one of my favorite ps2 titles and just found out that it will be made a ps3 hd set of both games which is epic. But on to the figures I own both and I have to say they are great the detail, articulation and scale are just perfect. I actually like the Anubis colors which is from the sequel the 2nd Runner a bit more then the original games figure I'm really looking forward to the release of the Anubis villain figure which looks to be a perfect replica of the mech. I do hope will see other designs from the game to be released inn Revoltech!!!

Cool. I would not mind picking up ZOE for the PS3 since I only borrowed them from a friend for the PS2.

so, i have seen your review its pretty neat. i just wanted to point out some Source references.

The hand that can hold the revoltech box might be a refernce to the game cause on the game you could grab some enemies or enviroment elements like some metal squares and use them as weapon or shields. not really sure but i rememeber that of the game a lot.

The cockpit is actually in that position while jehuty is on Flight mode. is not exacly like in the game but it happen.

The Ring, is to put those additional flotting parts, but its actually a ring that appears in the game showing the player where the enemy robots are comming thats why its says "Enemy" on one side. a really GOOD detail if you ask me.

In the review you say those large "options" actually those are the small parts, those large ones are Aimed missiles that are a weapon in the game. really neat.

The trasparent part is a "Slash effect" for the sword. as you said in the review.

hope it helps cause your review is pretty good but it could be better with some Source reference. this is by far my favorite revoltech at the moment and i dont have it.... so .... im gonna fix that A.S.A.P.

thanks for the review. sorry about my bad english.