Hot Toys is a Hong Kong based toy/collectible maker that has really built a reputation of making the best 1:6th scale poseable figures in the world today. Their attention to detail, presentation, and craftsmanship is unrivaled. 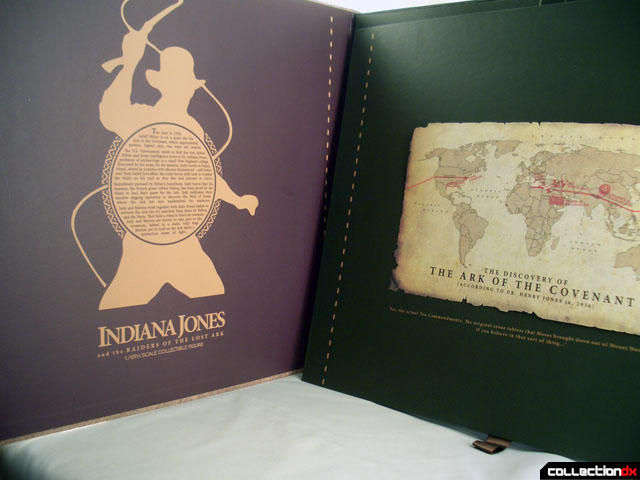 They are expensive pieces. Figures in the main MMS line will run anywhere from $125 to $300 depending on how accessorized or big they are. The MMS DX line ups the ante with (usually) a second outfit, lots of accessories, and the figure will include their P.E.R.S. (Parallel Eye Roll System). 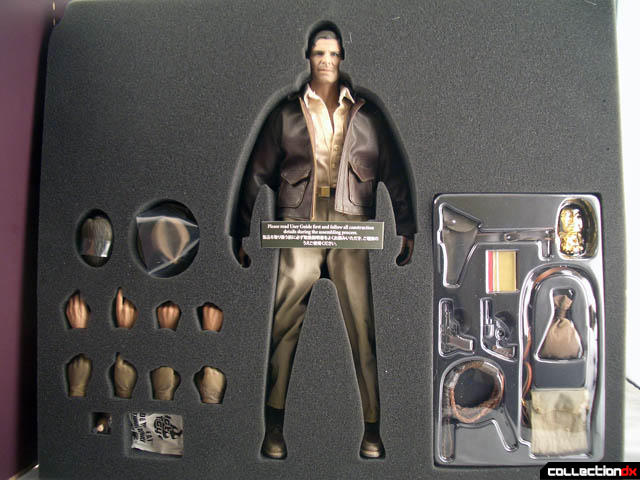 Today we are looking at Indiana Jones as he appeared in the film Raiders of the Lost Ark, the fifth release in the MMS DX line. 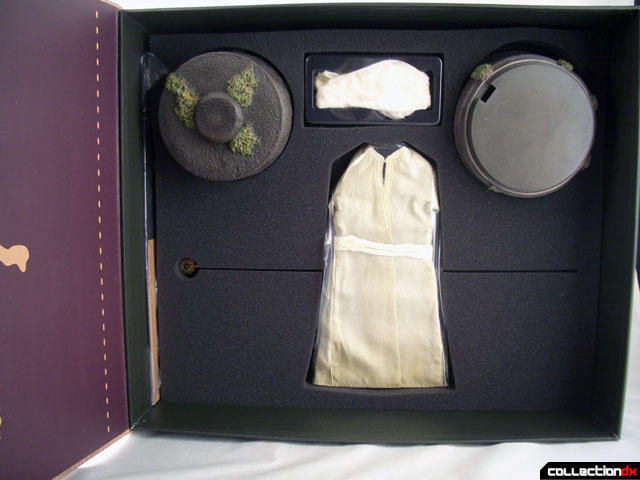 This set comes with the Indiana Jones in his classic adventure outfit (including bags, whip, gun, journal, fertility idol, and Staff of Ra), as well as the Arab garb he dons in the film to get to the map room. The Arab robe is going to stay packed up for me. 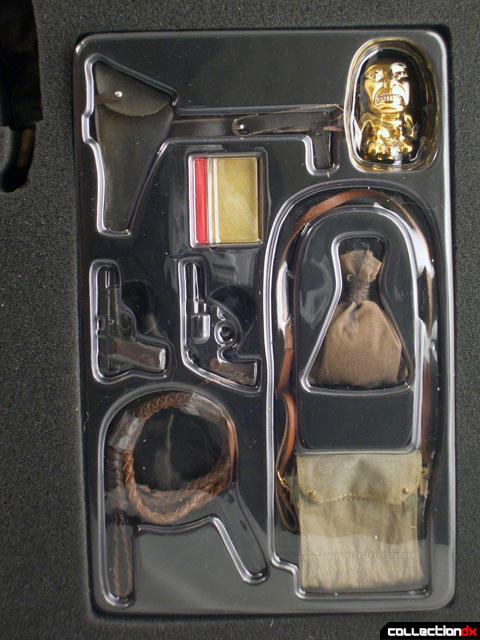 Also included is a deluxe base, pedestal, and a double-sided backdrop that features the temple from the beginning of the film on one side and the map room on the other. The backdrop is huge and I just didn’t get around to shooting it set up. It’s nice they include it but like the Arab robe, it’s not an accessory I am ever going to use. 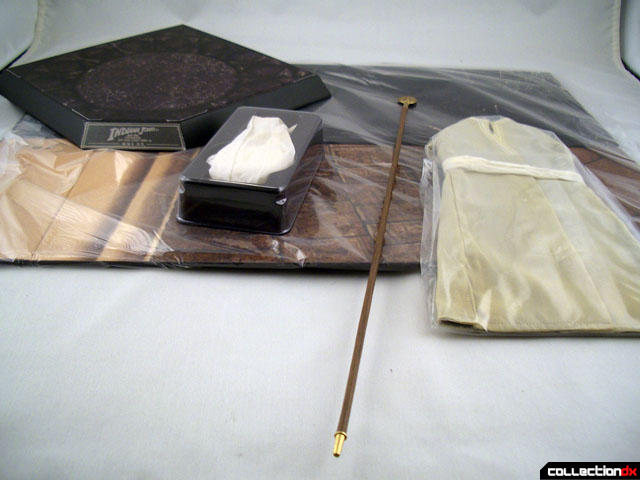 Indy looks fantastic out of the package. The likeness to Harrison Ford is very good, but I can't help but think it looks a little "soft" compared to some of their more recent solicitations. 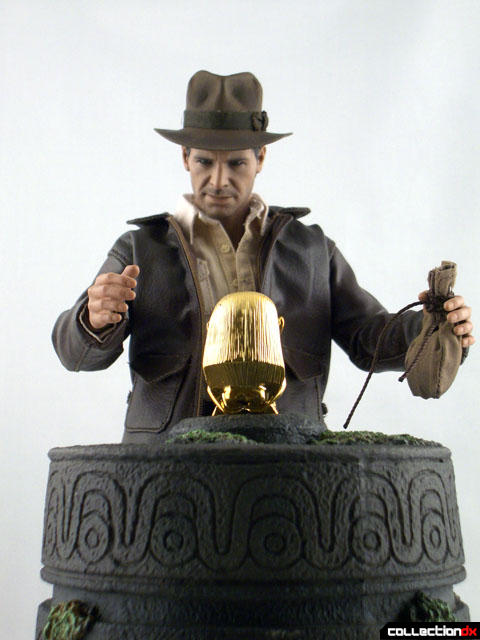 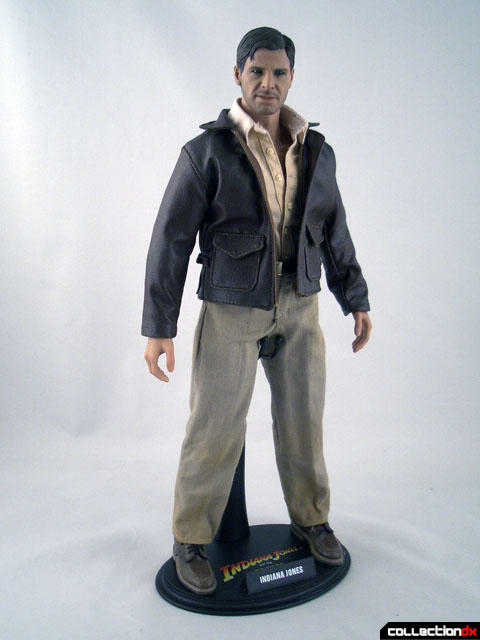 The outfit is exquisitely detailed with nothing overlooked. 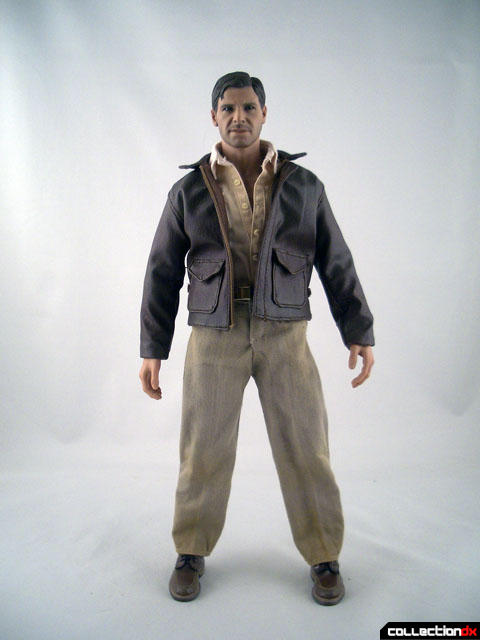 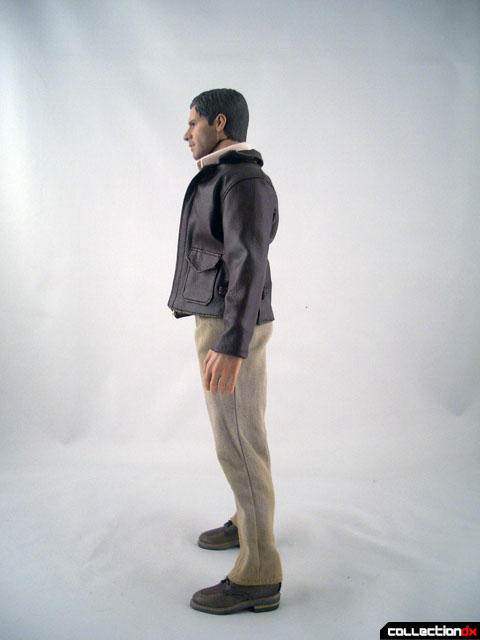 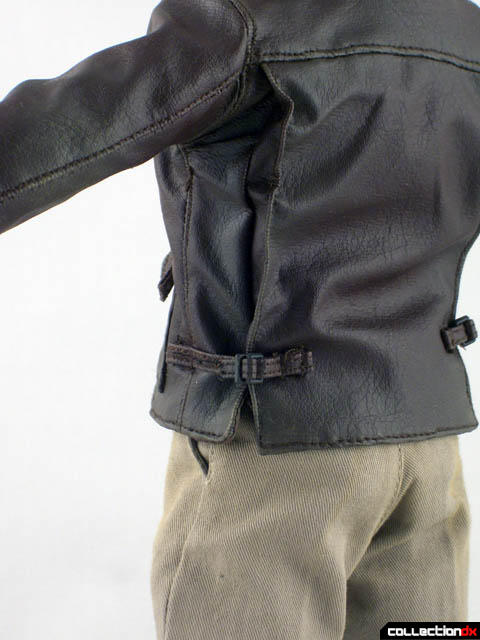 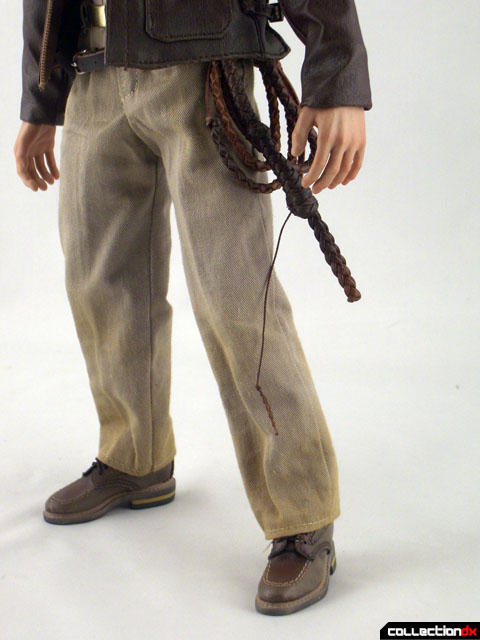 The buttons on his shirt actually work, the jacket is pleather on the outside and fully lined inside. 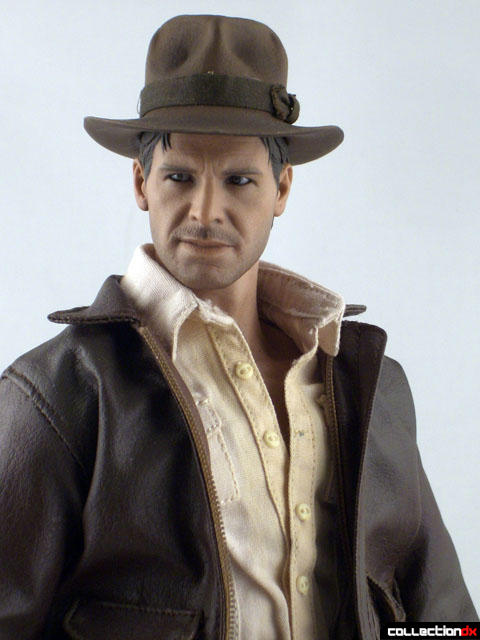 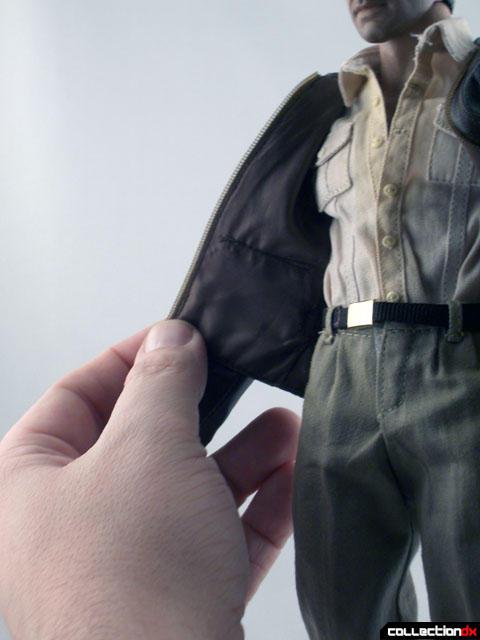 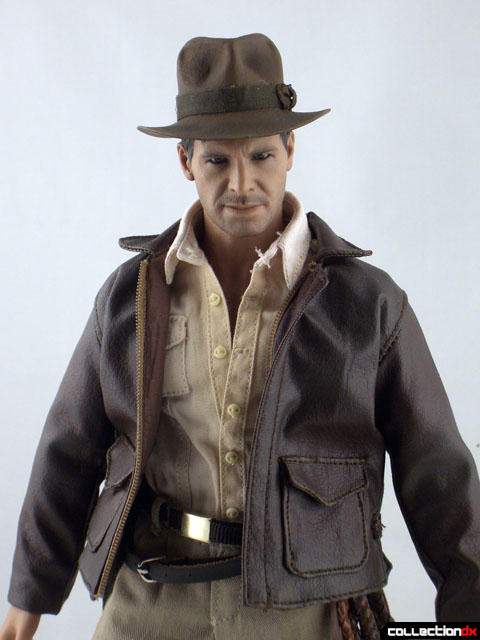 Being a DX release, the head features the Parallel Eye Roll System which is a fancy way of saying they have included articulation in the eyeballs. 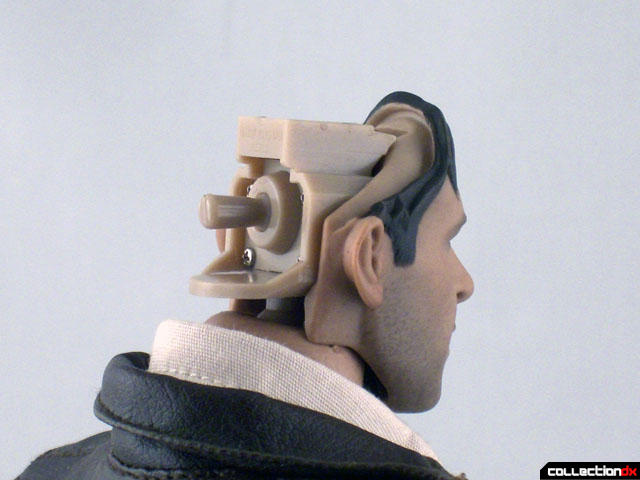 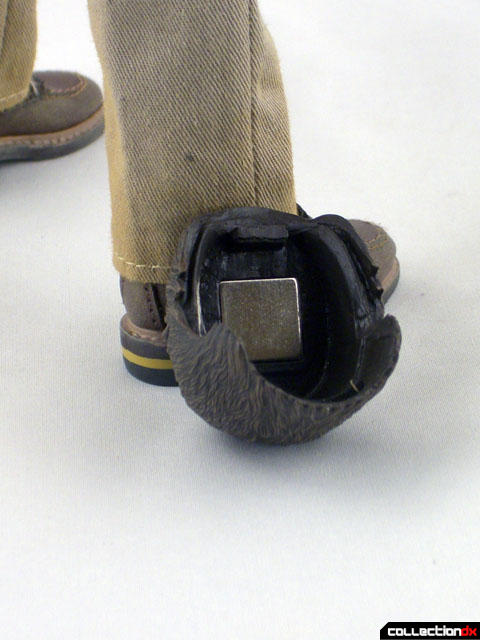 Being able to adjust where the figure is looking really makes it come to life. 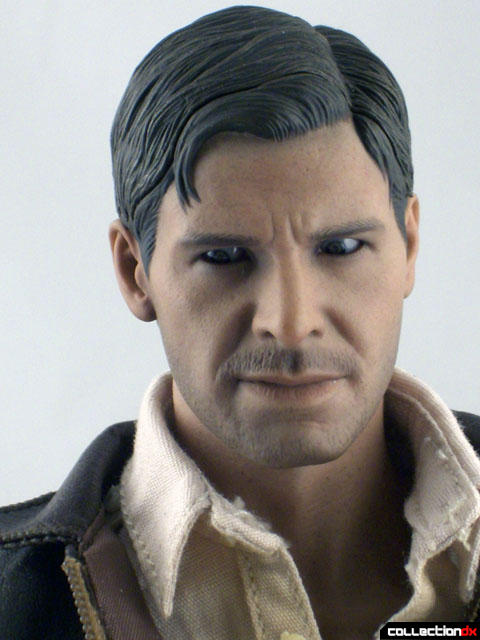 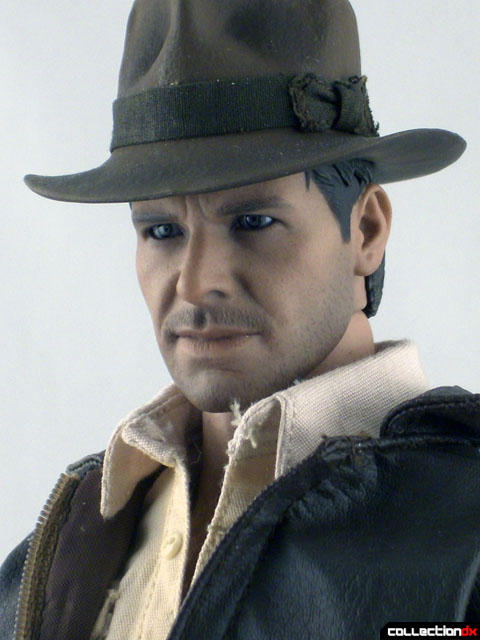 Unfortunately, no matter how I try to adjust it, the fedora just doesn't sit quit right on his head. I could push it down but I do think that paint rubbing off would become an issue. 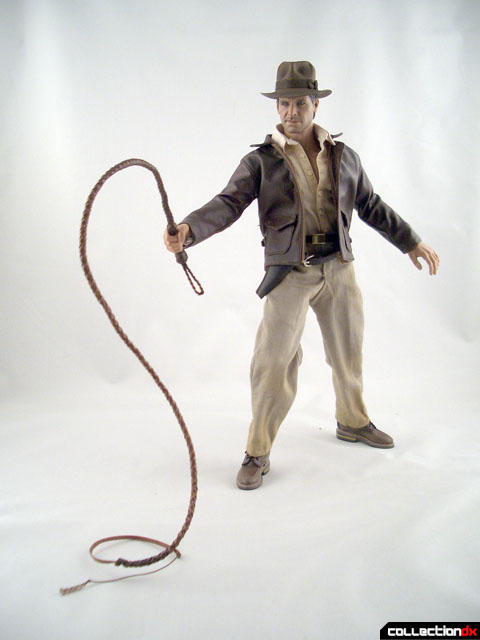 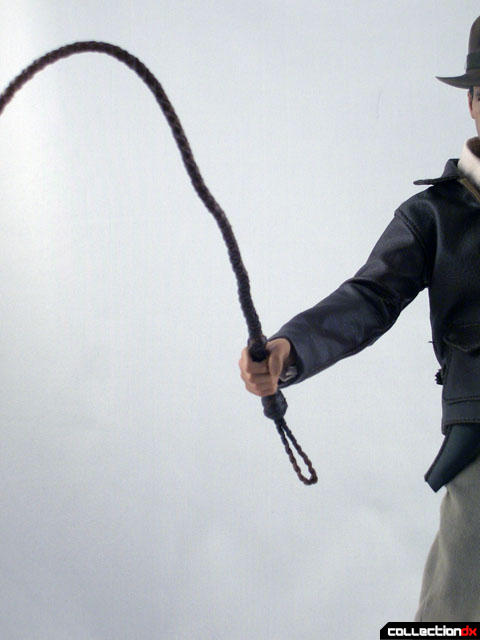 The bullwhip does contain a metal wire in the lower half, but this seems absent halfway down so getting it cracking in mid air seems to elude me.

Overall it is a very nice release and a die-hard Indiana Jones fan would do well to consider getting one but I can't help but feel they missed the mark by not including the Ark of the Covenant. It seems to me that was the accessory begging to be included here. 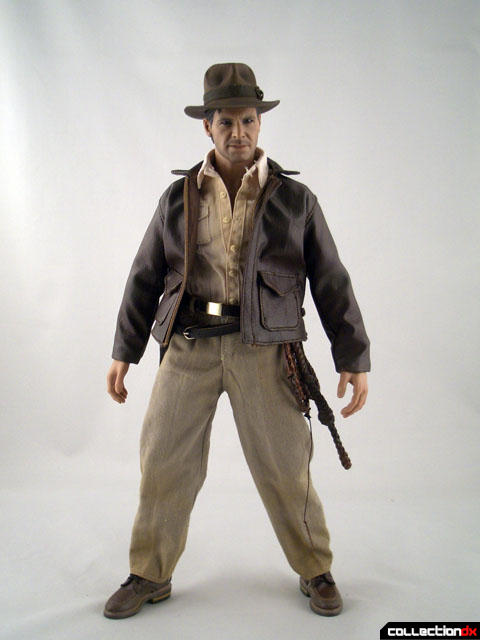 While he is not as "sexy" on the shelf as an Iron Man or a Batman figure, Indy has certainly earned his place in the pantheon of heroes in modern cinema and is right at home amongst other Hot Toys releases.

The face is good but not perfect IMO although the moving eyes add a lot of expression. Still amazing though, Hot Toys knocked it out of the park again. They are flat out the best in getting clothing to drape naturally at 1/6 scale. Bummer about the hat, although in my experience no fabric hat ever looks or fits right at this scale. I have a 1/6 baseball cap that makes any figure look like Smalls from "The Sandlot".