Gyaos comes from the 1967 film Gamera vs Gyaos, the third Gamera film in the Showa series. While not Gamera’s first opponent, Gyaos has become his most iconic foe, appearing in all three incarnations of the Gamera series.

Gyaos is a prehistoric creature that resembles both a bat and a Pterosaur. It can fly, fire sonic beams from it’s mouth, and trample on the homes of terrified Japanese people.

The Gamera films of the 60s were noticeably poorer than the equivalent Godzilla films, but what the lacked in budget they made up in charm. Make no mistake, the rubber suits in these movies look CHEAP but there’s something really fun about them.

You can imagine the challenge then to make Gyaos both look like the original suit and a modern toy. How “cheap” do you make it look? Do you go for movie accuracy or an idealized version of the classic design? Kaiyodo settled for something in between for this Sci-Fi Revoltech release, brought to you by ToyFreakz.com.

The box is typical for the Revoltech Sci-Fi line – a beautiful book-cover style box with obi strip around the bottom. Inside you have images of the classic monster along with text about the character. All of the Sci-Fi series packaging has a nostalgic feel and they look great displayed together. 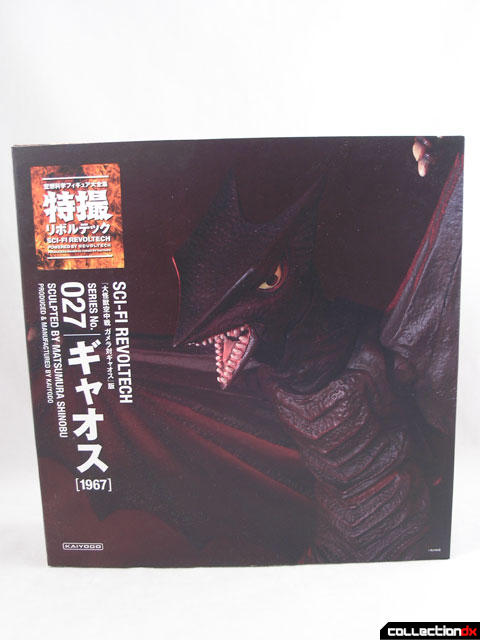 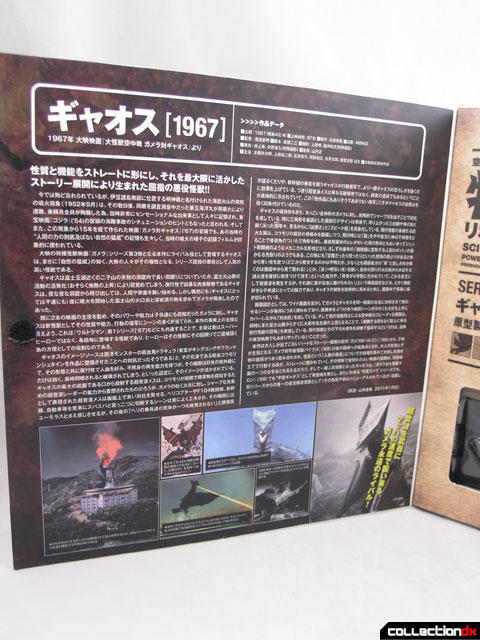 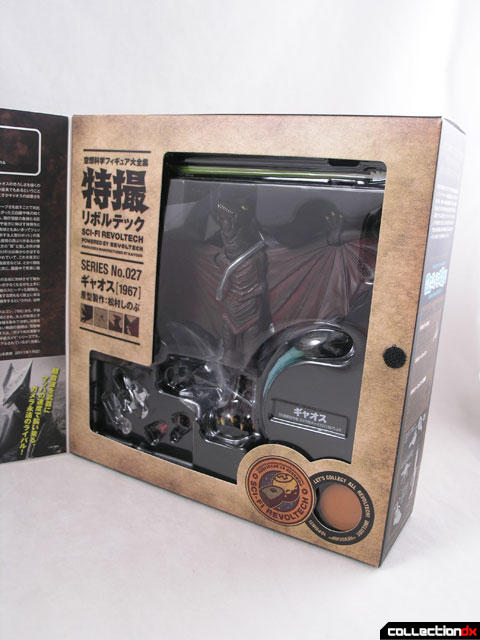 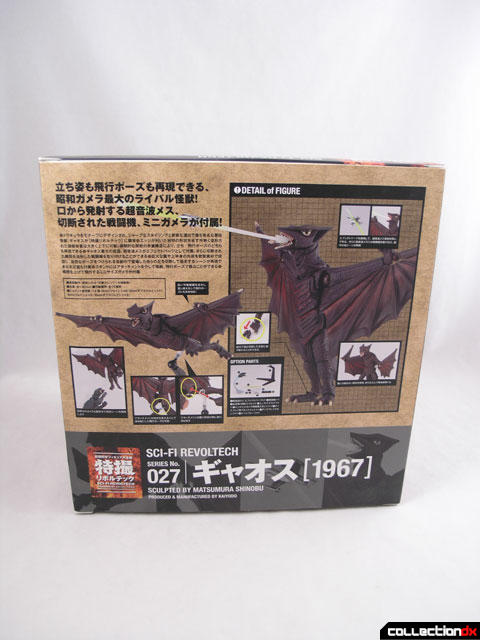 Included in the packaging is:

Gyaos is actually reasonably large at about 5 inches tall with a 6 inch wingspan. The proportions are right for a suit actor to fit inside. 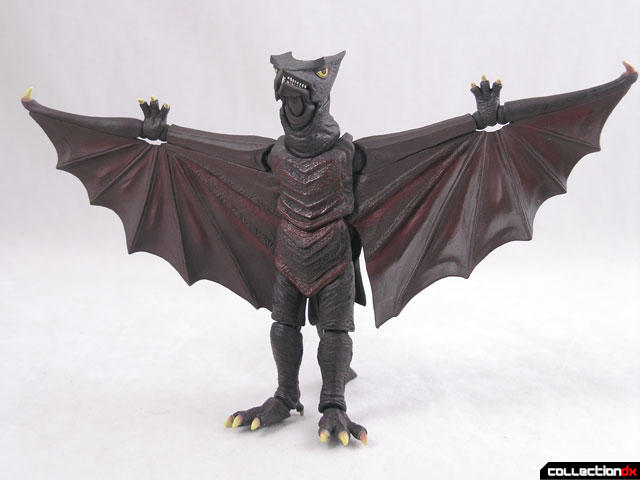 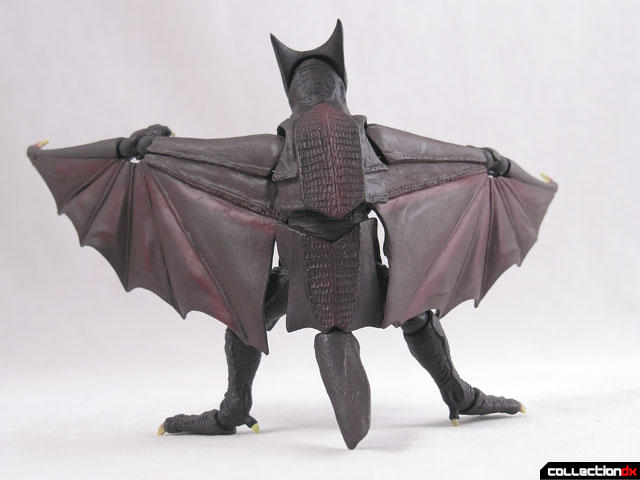 Articulation is great, with Revoltech joints all over the place. The figure is much more dynamic that Gyaos ever was in the movie. 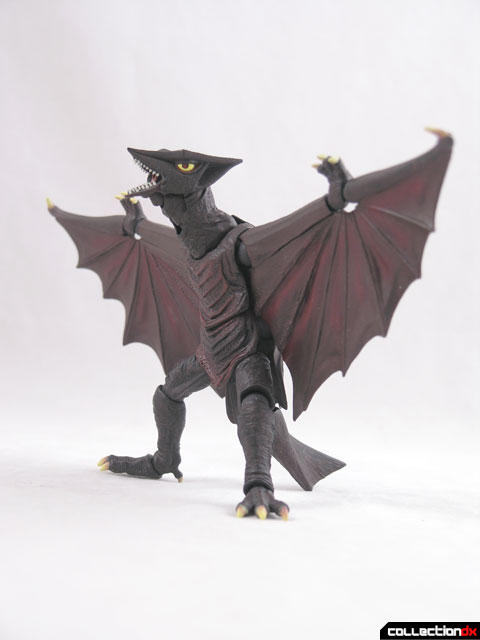 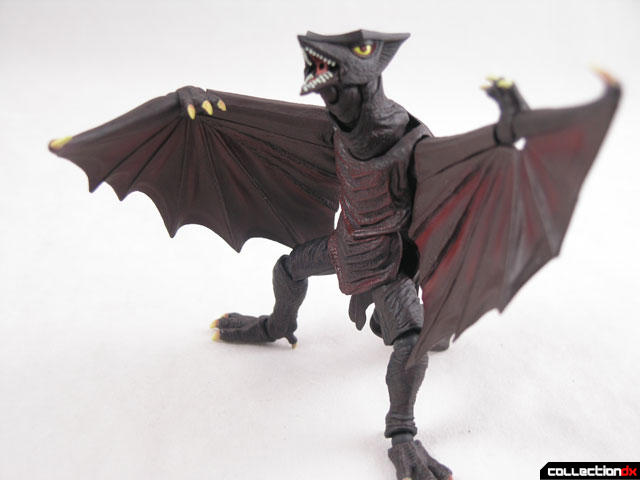 The head features the trademark flat top and large eyes. The mouth features two different points of articulation and a hole to attach the sonic beam part. The head can be tilted back all the way for flying mode. 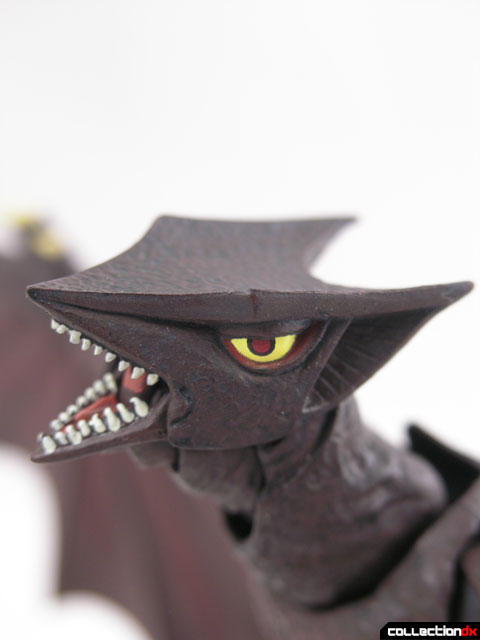 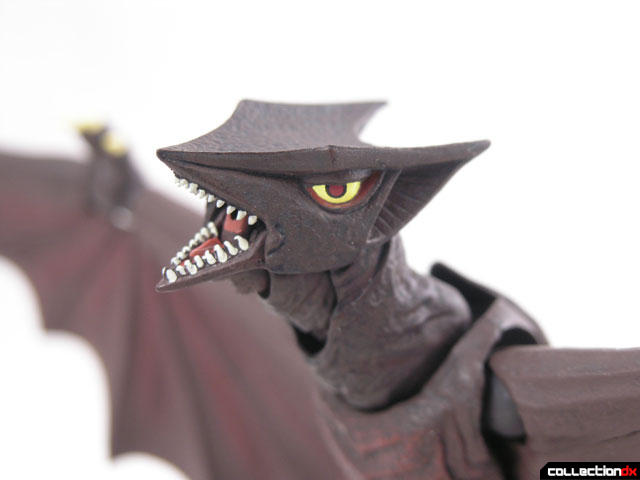 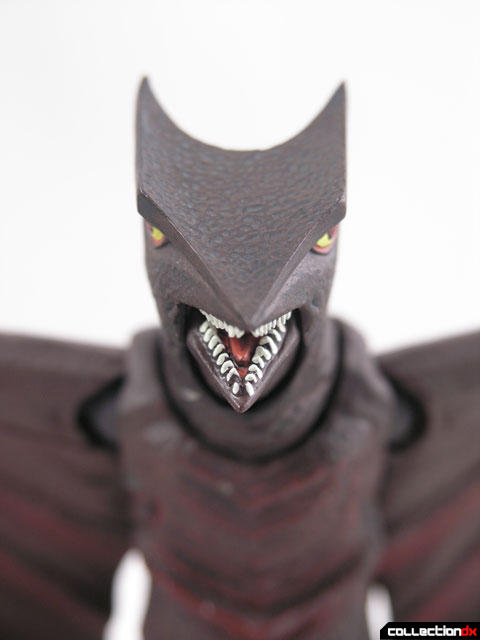 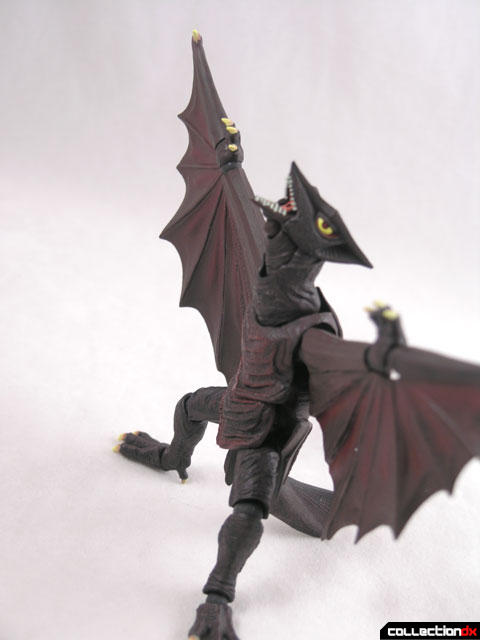 The body has multi-segmented joints under a thick rubbery coating, but the sides are left exposed. 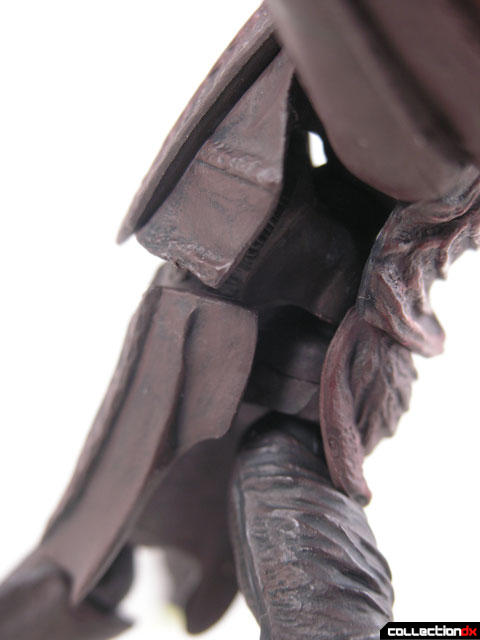 The wings have Revoltech joints in the shoulders, then dual joints at the claws, enabling a wide variety of poses. 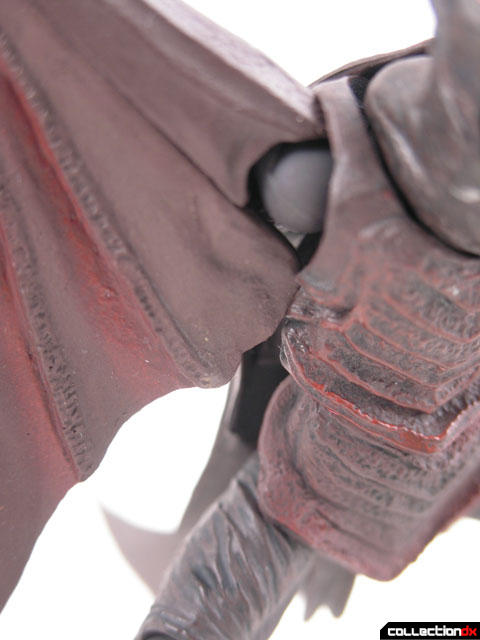 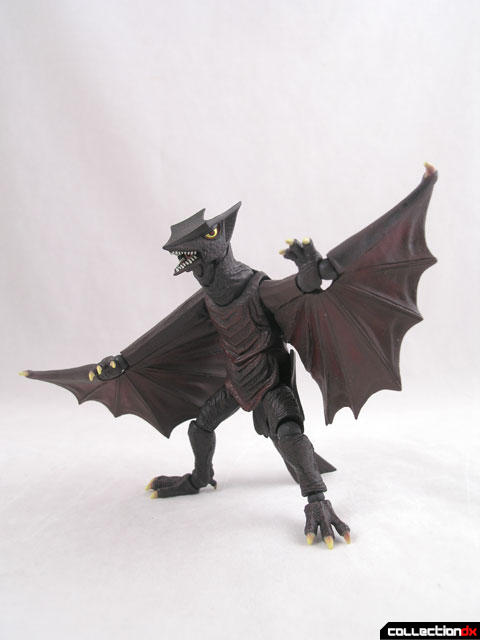 The sonic beam is a long, transparent weapon effect that mounts in the mouth. Included is a severed jet which clips on to the beam effect – the effect is very nice. 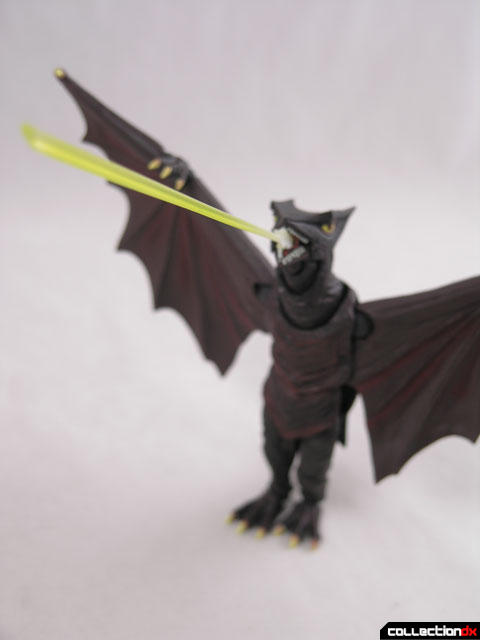 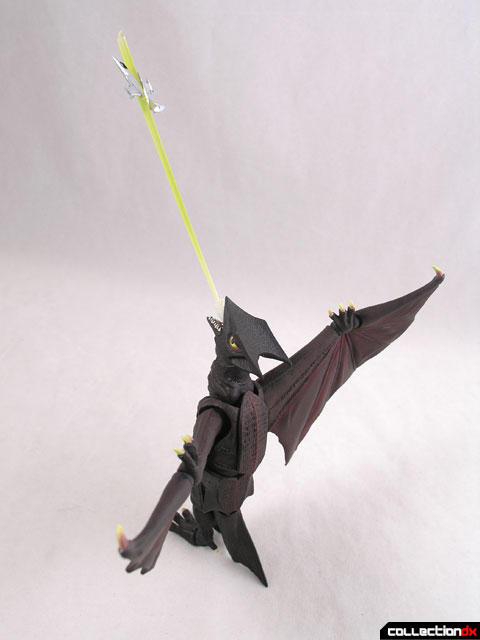 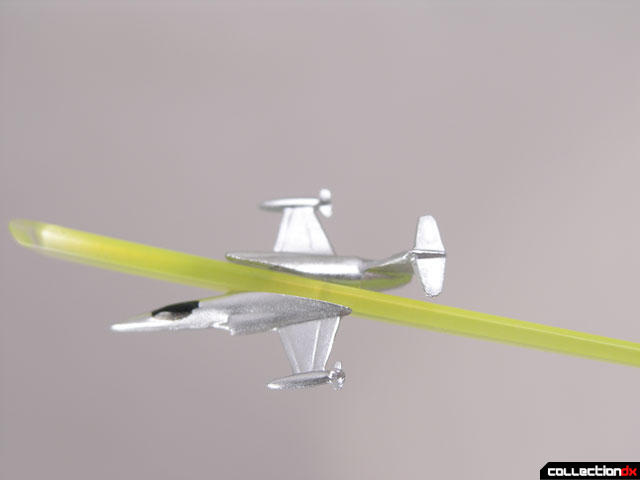 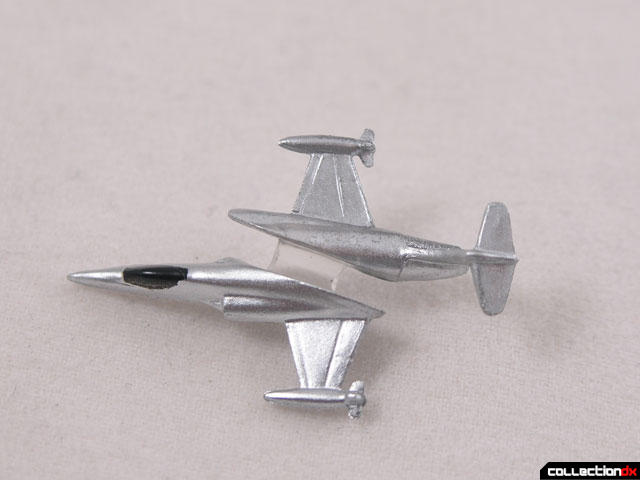 Gyaos can be put in a flying pose with aid of the included stand. The stand includes a special clear part designed to go around the tail joint to support poses. This eliminates the need for a large hole in the back of the figure as so many Revoltech figures had before it. 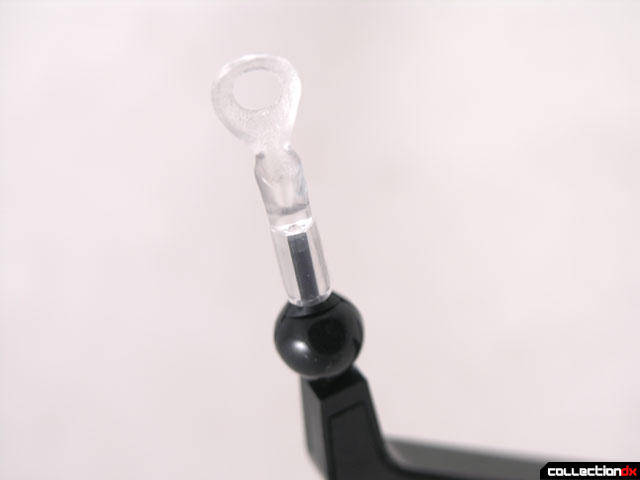 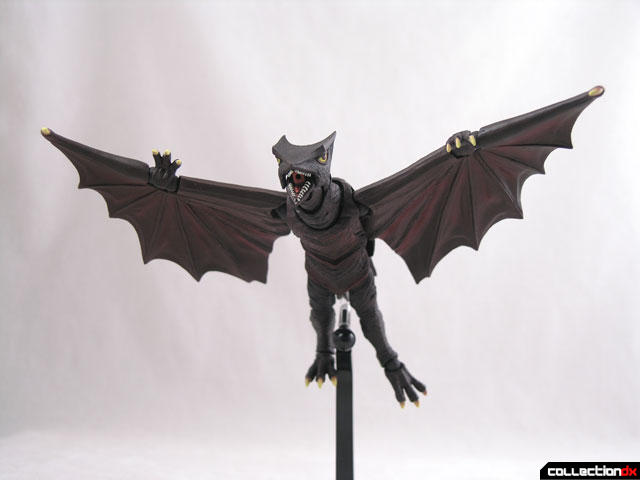 In the original 1967 movie, Gyaos cuts off his own foot to escape from a trap. This is represented here with the additional severed foot accessory. 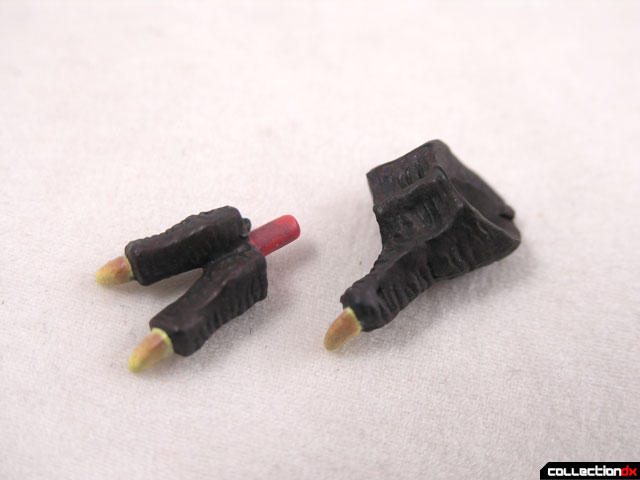 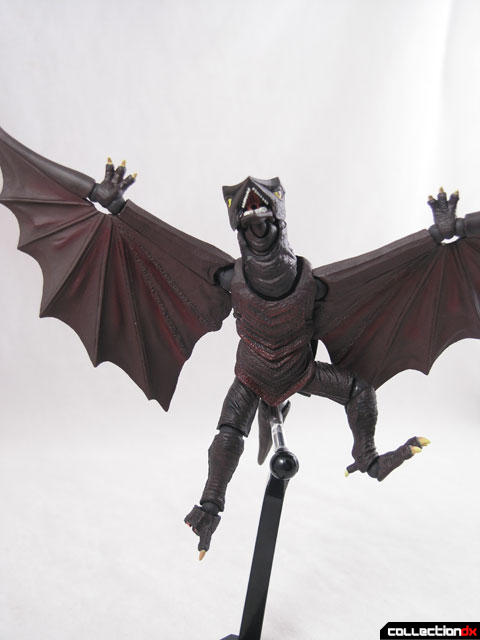 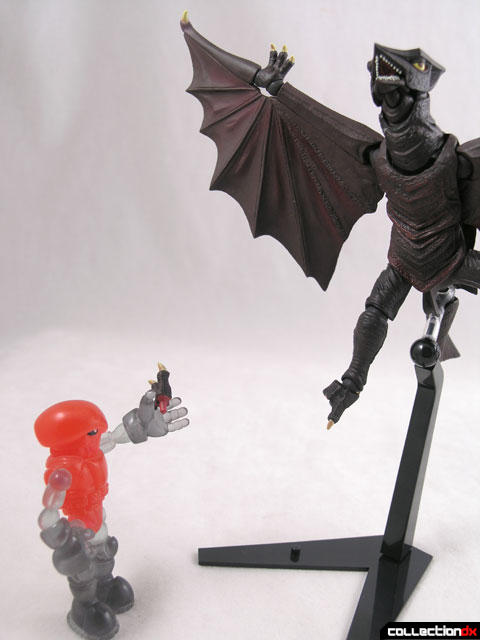 Finally, also included is a small flying Gamera statue that is unfortunately not to scale. It’s a nice accessory, but feels like a last minute addition included to beef up the set. 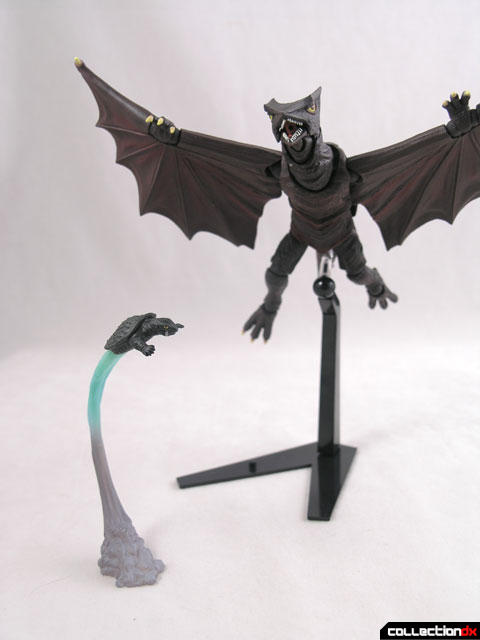 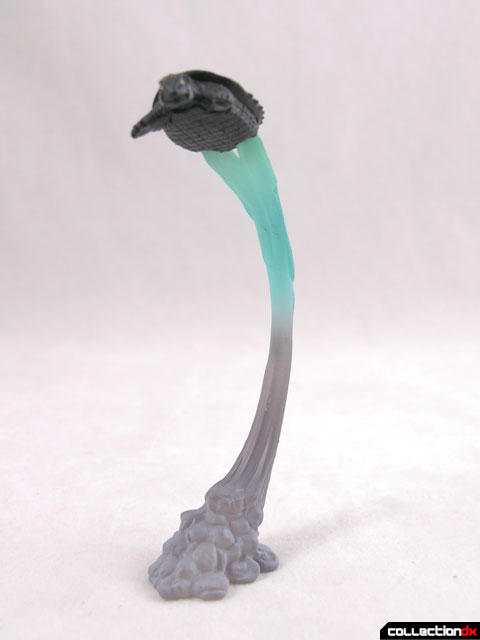 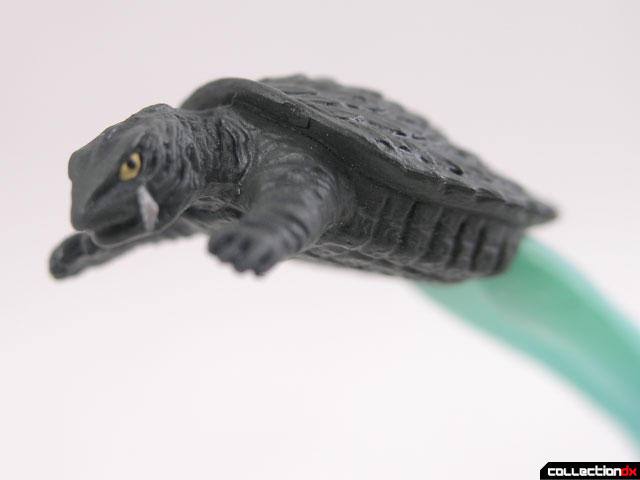 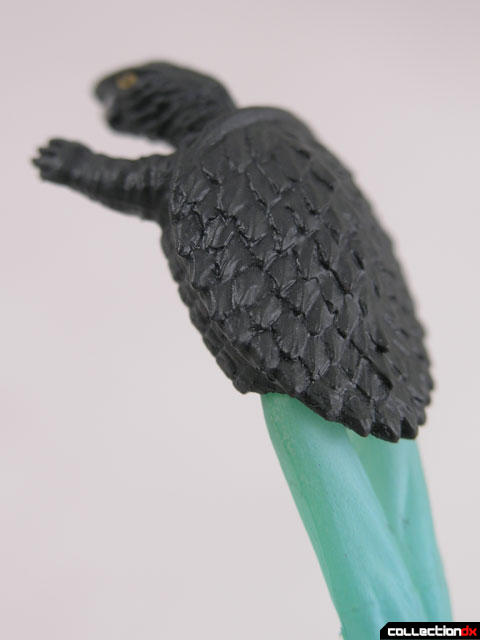 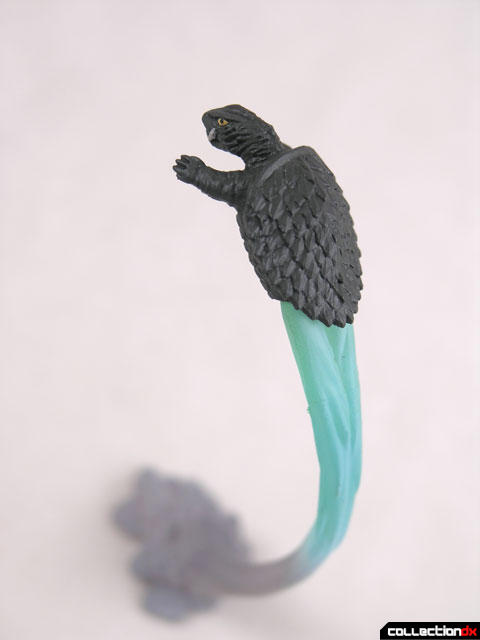 Overall this is a great figure – highly recommended. You can get yours from ToyFreakz.com!

it's okay, i think i see his parachute

You might find this interesting. One of the first Japanese political scandals following WWII was the Lockheed bribery scandal.

The F-104 was basically a death trap, but Lockheed bribed the Japanese to buy them for their air force

A bit of political Showa history!

I guess that's why they had surpluses for Daiei Motion Picture Company!

The problem with the F-104 was that it went like a bullet--and turned like one. Pilots who were used to aircraft that could actually maneuver would start trying to do turns at low altitude and the thing would go right into the dirt. It was only a "deathtrap" if you used it wrong, but it was very easy to use it wrong, and if you used it right there wasn't actually a whole lot you could do.

You have no idea how much crap we have to go through about how Bribery Is Wrong And You Totally Shouldn't Do It that is a direct result of various Lockheed bribery scandals.

Funny enough that you mention that. I recently contacted a WWII vet who flew 68 missions in B-26 Mauraders during the war, another aircraft that had issues and a high crash rate. He said that the plane had a lot of specific issues that most pilots did not know how to handle when they appeared and crashed the plane. But if you were trained to handle those weird issues, it really wasn't much of a problem aircraft attesting to his usage of the plane. He said "they never told me it was a dangerous aircraft to fly!"

I'm sure the same can go for the F-104. Early aircraft had ejection seats that ejected from the bottom of the aircraft and I know the Germans and Japanese lost hundreds of F-104's during their service with those countries not to mention they weren't even used in Viet Nam by the USA.

Also kaiju could easily shoot them out of the air as attests to this figure. F-86's and F-104 really didn't have the punch to take out kaiju.

It's a gorgeous aircraft and record setting aircraft and my favorite of the century series but the more I read about it's actual service I go "Yikes. Give me an F-8 Crusader any day of the week...and Shin Kazama used the F-8 in Area 88!

It's just one of those ideas that you're like "dude, no."

The F-8 was pretty sweet. It would have been interesting to see where things would have gone if the Crusader III had gotten picked up instead of the Phantom II.

Kaiyodo actually did two different versions of both Gamera and Gyaos; the first was a stylized sculpt that looked more like the designs from movie-poster art, and the second was what we see here--a sculpt that was more reminiscent of the rubber suits. (They previously did the same thing with Giant Robo and GR-2.)

In fact there's a third version of Gamera (again based on artwork) coming out, along with Legion.

Actually, The revoltech 007 Gyaos was modeled after the version of Gyaos that appeared in the 90s reboot of Gamera. This version is modeled after the 60's version. Same thing was done with Gamera. the third version is a non-poseable Gamera statue in scale with the Legion figure, but based on the 90s appearance as well.

Thanks for the heads-up.

They actually do have a poseable "Legion" Gamera: http://www.hlj.com/product/KYD04039

I love how Pheyden's all like "Here, you dropped this."

I think they intentionally making it off-scale so you can use it for perspective trick, and make it as if Gamera approaching from a distance. I don't remember exactly but I think one of Gamera revo also has small Gyaos for the same purpose.

"I don't remember exactly but I think one of Gamera revo also has small Gyaos for the same purpose. "

So... with both of them... you have something for your human Revoltechs to play with?