In the 1975 anime UFO Robo Grendizer, Duke Fleed pilots the super robot Grendizer against the evil Vegan Empire. No, we don’t mean a whole army who does not eat animal products, we mean those from the planet Vega who wish to destroy Grendizer.

The weapon of choice used by the Vegan army is called the Saucer Animal. These giant mechanical monstrosities usually fly to earth in the form of a flying saucer and then open up to reveal the terror within. I think I can safely say that out of all the enemies that Go Nagai created for his super robot series, the Saucer Animals are the coolest. Unfortunately, like most villains, they barely got represented in toy form.

HL Pro, a Japanese toy company aims to change that with Giru Giru, the second entry in their Metaltech series. You have to give HL Pro credit – they have kept the Grendizer / Goldrake love alive in Europe, where the character has a huge fan base. Giru Giru was the first Saucer Animal to appear in Grendizer, and is as iconic as Garada K-7 is to Mazinger Z.

I was fortunate enough to get my hands on a prototype of the new Giru Giru release, so please keep in mind that this is not the final release of the toy, and changes may occur prior to showing up at retail. Also, as this was a prototype there was no packaging.

When we first see Giru Giru in the anime, he appears in saucer form. This is where most of the metal is contained and it feels appropriately solid and heavy. The center tower and wings are plastic. 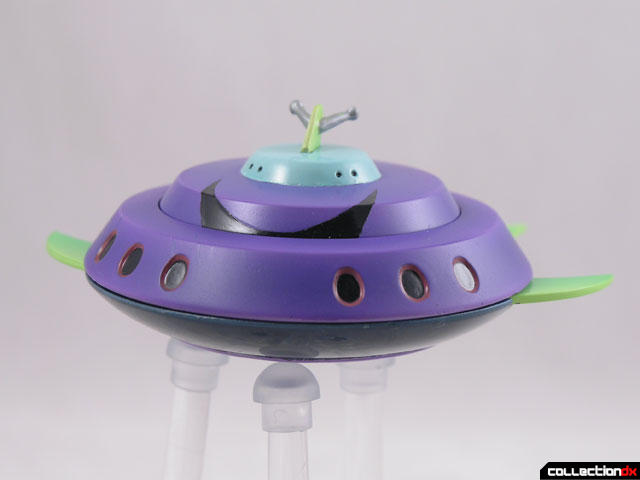 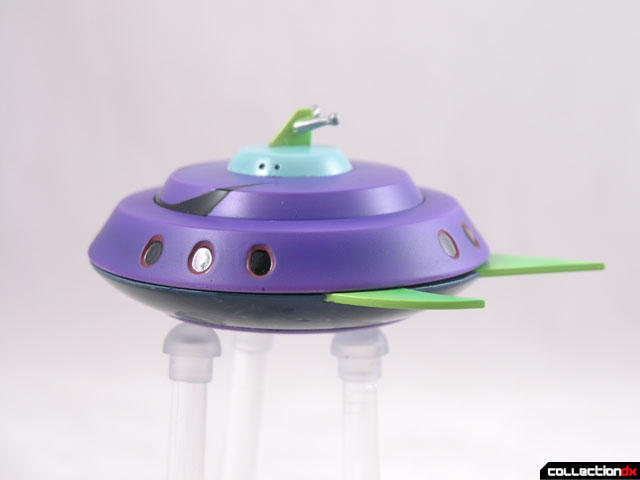 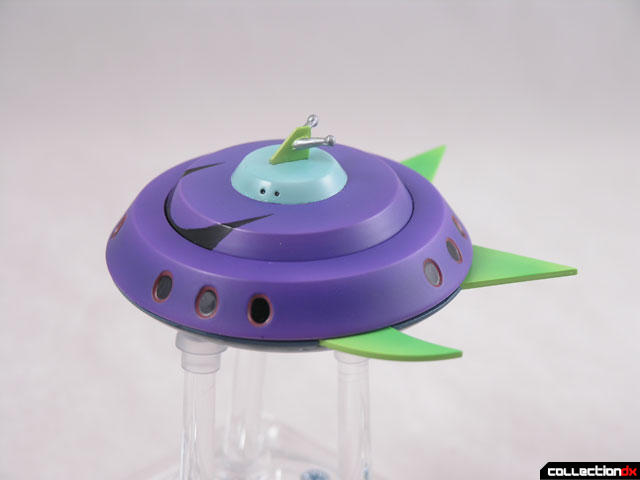 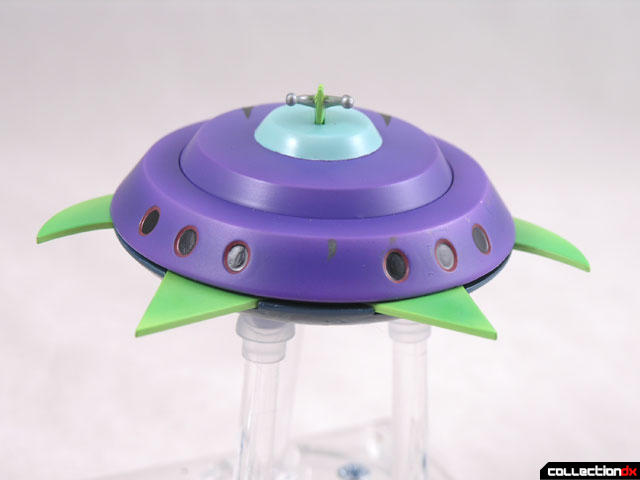 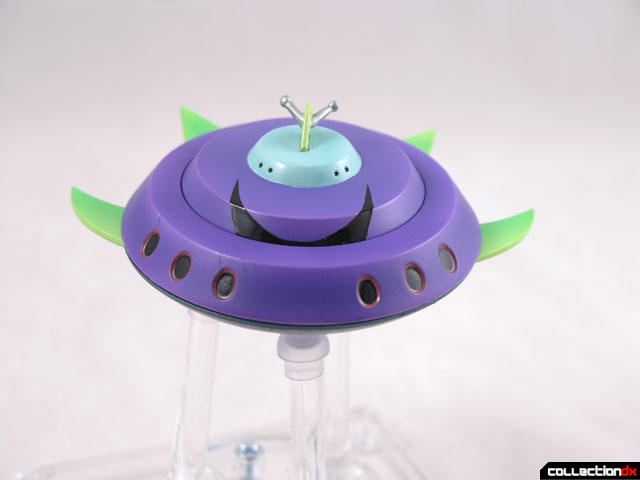 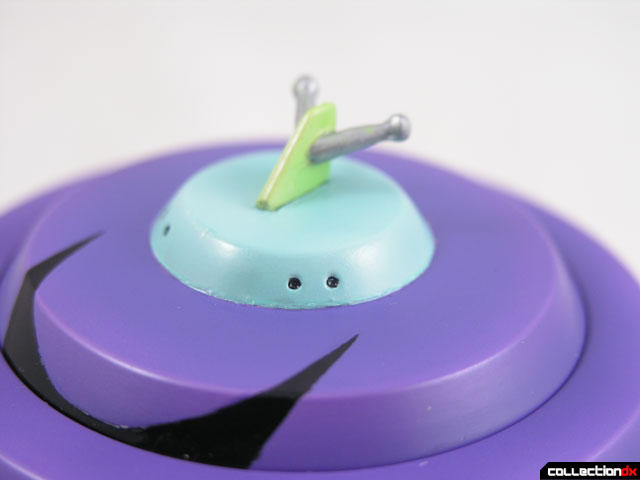 Once Giru Giru hits Earth he sprouts three legs. Here, the legs are represented as add-on pieces, and will be made out of plastic. They just plug in with friction. 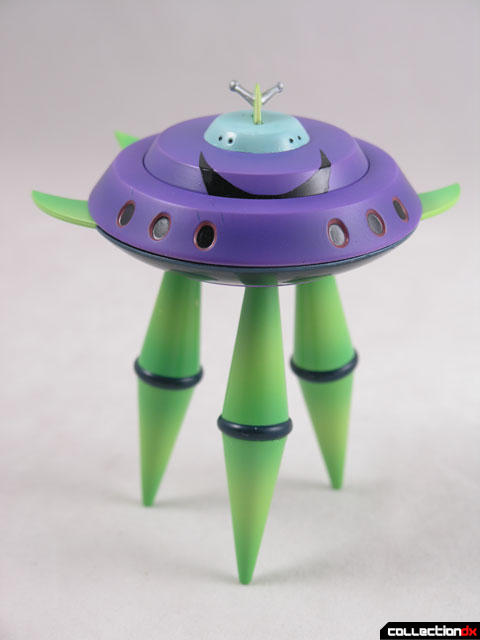 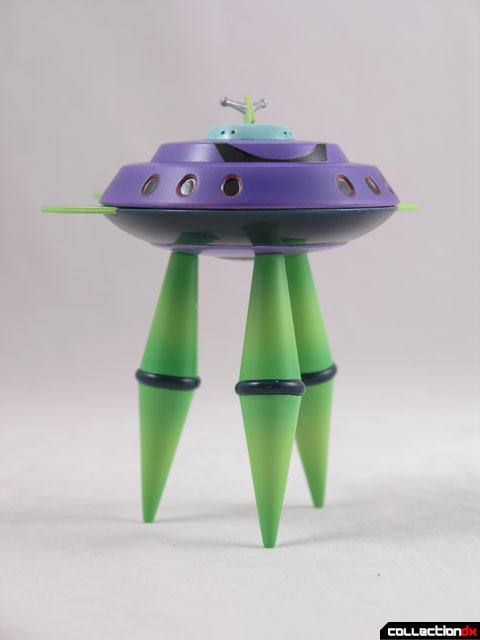 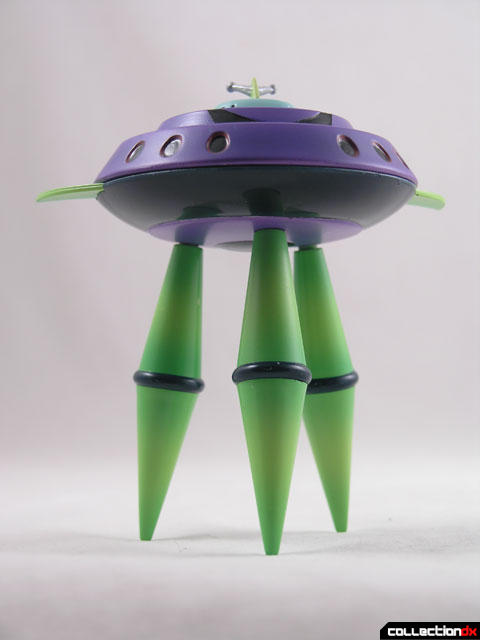 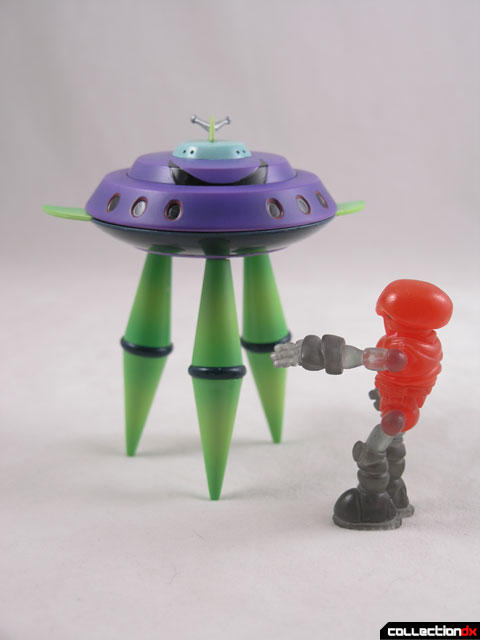 While the saucer mode is good enough, this is not what we are here for. We want a Saucer Animal.

You must first physically split the saucer down the middle and separate the top and bottom halves. You also need to remove the wings. 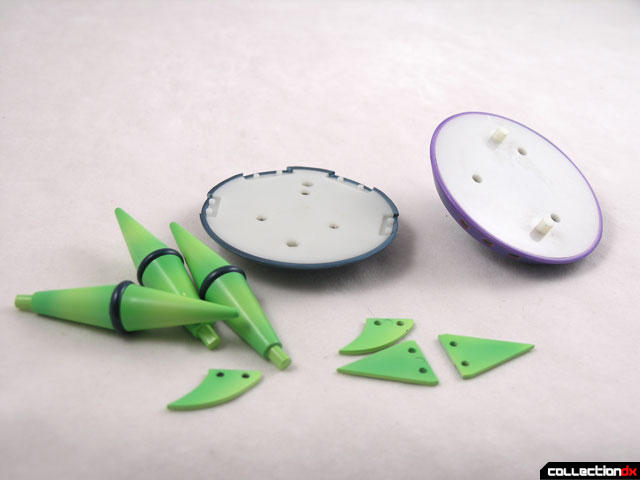 Each half now re-attaches to the main body of Giru Giru, which is all plastic. 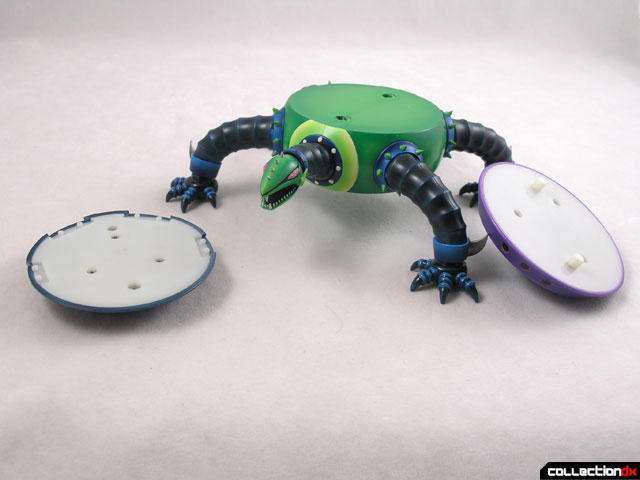 Giru Giru is in scale with the Metaltech 01 Grendizer, so it’s not terribly big, but what it lacks in size it makes up in cool details. 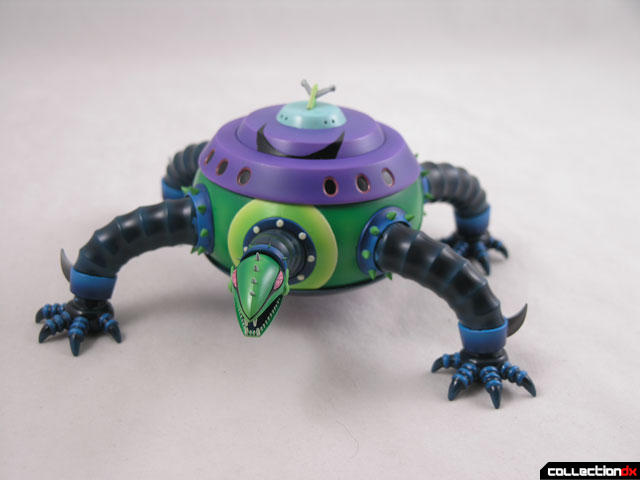 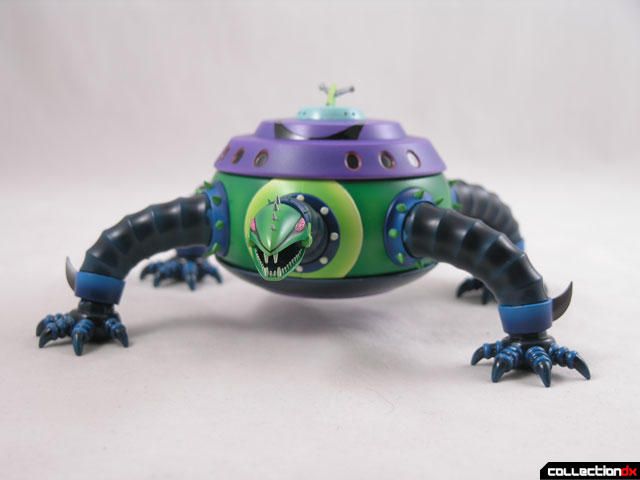 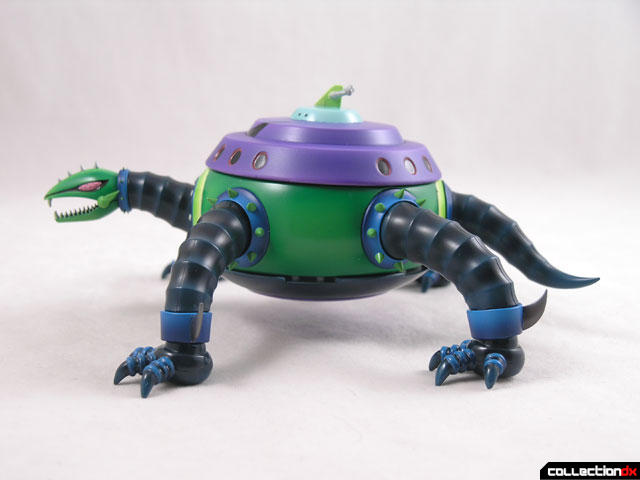 First of all, the paint is amazing, with subtle shading and fine details. The molding is very sharp with appropriately dangerous spikes and teeth.

Each limb is articulated, with the four legs on ball joints (each with a ball jointed foot), and a swivel tail and neck. 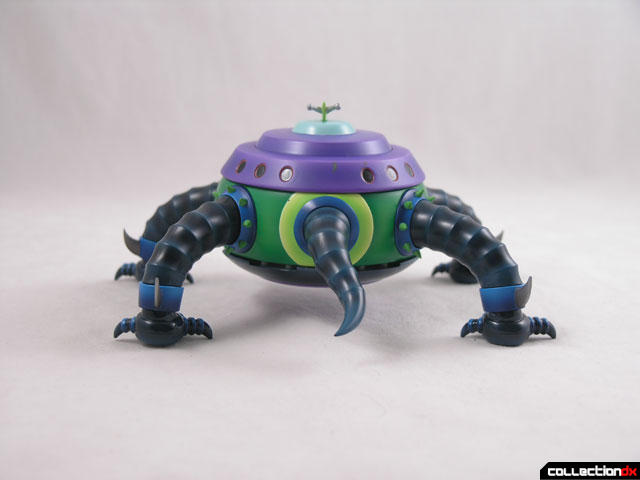 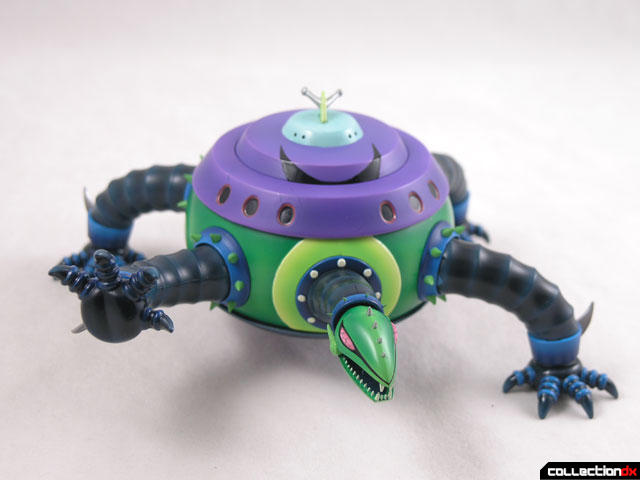 The head is also moveable, with an articulated jaw. The range of motion on this jaw is limited, but it will be increased on the production version. 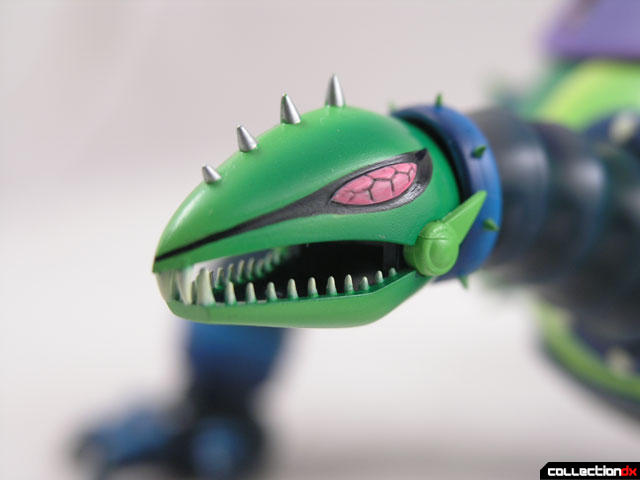 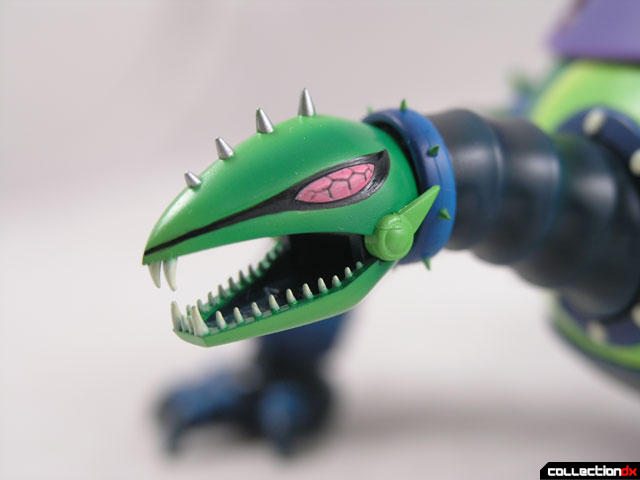 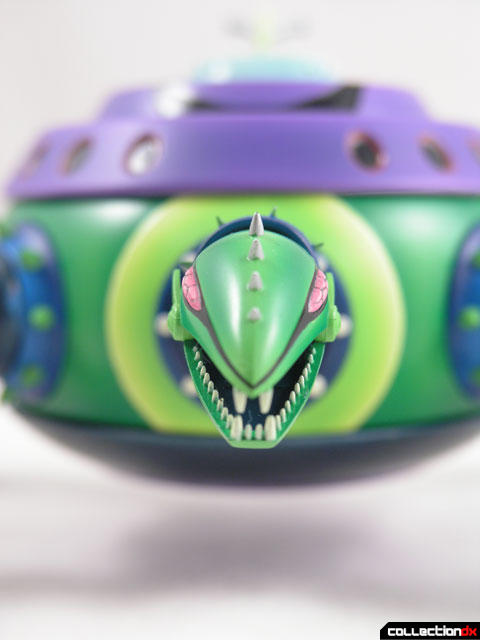 Posing is somewhat limited despite the articulation. This is more to do with the design of the character than anything else, and can’t be helped. 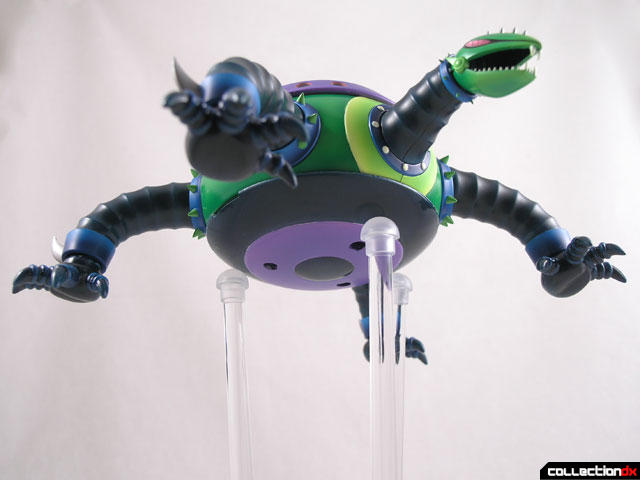 As I mentioned before, this is a prototype, so there will be slight changes before the toy goes into production. For example, the top and bottom die cast saucers will be tighter, especially the bottom part. In addition when joined together, there is still a small gap between the center part of the body of the top and bottom saucers - that slim gap will be removed.

The jaw of Giru Giru will be modified so it can be opened widely, which will be necessary due to a planned bonus part.

Also, this sample is mainly hand painted, so color application will be better due to the use of paint masks for the mass produced pieces. 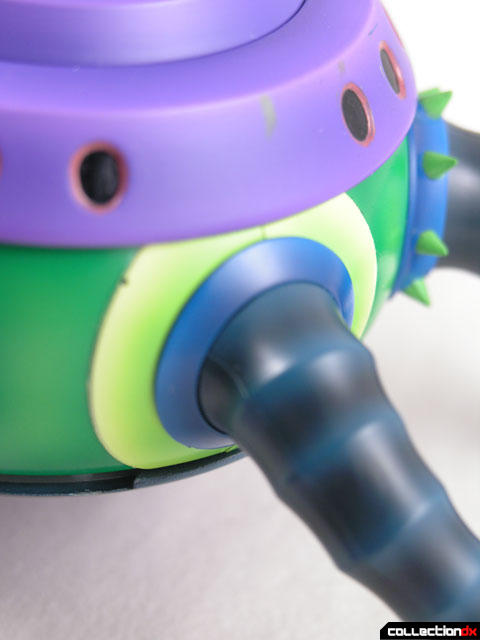 Giru Giru will be available in two color variations. The one shown here is the ‘normal’ color version, another one will be more accurate to how Giru Giru appears in illustrations and the TV show, called the “manga version”. This version will be on sale exclusively through High Dream’s online shop but the price will be the same for both versions though.

Due to all the parts necessary to make that Giru Giru and a smaller production, the retail price will be JPY9800 which is twice the price of the stand alone Grendizer. High Dream believes it is still a reasonable price if you compare this with the usual Japanese release for similar toys/collectibles, though.

I have to say I really like this figure a lot, and I also like the fact that HL Pro is numbering them like the SOC or Chogokin lines. I think they are on to the spirit of the original Chogokin toys, and future releases seem to be adding more play value. 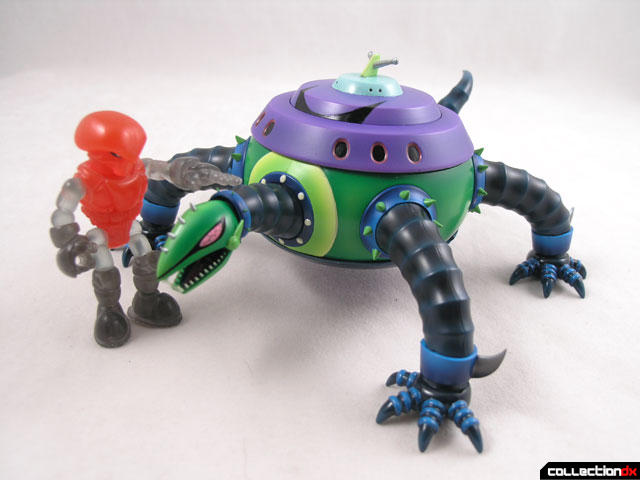 If I had any complaints it would be that I think it needs some kind of missile firing gimmick to truly feel like it belongs alongside your vintage pieces. As it is, I think it will be a great addition to any collection.

I'm not a Grendizer fan (never seen it, don't really want to 'cause it's too old school for my tastes), but I like this thing! I would get it just for the saucer mode (I LoL'd at the detachable tripod legs), but the completed mode looks pretty awesome as well.

Nice review. I like how you point out this is a pre-production model and what the differences will be. Good photos as always.

Personally, I'm loving the fact that there are so many new Grendizer products coming out as of recently. Any chance this is a sign of a new series in the works? almost all of Go Nagai's robots have had a new series or two, seems a bit unfair that they keep leaving Grendizer out.

I 100% support and encourage the Grendizer love!

Can't wait to get this one - I like the design of this enemy saucer robot! Would anyone know the release date? Also, is the prototype the "weathered" version as compared to the Manga/Anime version?

What a terrible time to be broke! Grandizer is THE super robot that got me into the whole genre, so he holds a special place in my heart. I avoided the Metaltech since I already have the SOC, but I've wanted saucer animals for ages. Complained about it many a time to other fans.

Now we have a command saucer AND a saucer animal? Cripes. How much plasma would I have to sell to get the Metaltech Grendizer pack plus both baddies?.......

Mirror mirror on the wall, who's the greatest Grendizer and High Dream fan of them all?

I know the answer.

If it's a model from the Grendizer universe and made by HIGH DREAM, I'll buy it - DEFINITELY!!!!

HIGH DREAM is doing a great job with their METALTECH SERIES and I wish them luck from the bottom of my heart.

The only grumble about GIRU GIRU is that HL Pro had to change his anime-accurate set of teeth (seen on the resin prototype) to these anime-inaccurate needle-like teeth for safety reasons!

I find this decision simply unfair and illogical as this is not a toy but a model for serious collectors!

Looking forward to buy GIRU GIRU and waiting anxiously for the next METALTECH 03 - The Duke Fleed Buggy with a piloting Daisuke Umon!

I finally just got one of these today and in seeing this review now, I can't believe it's been out for 7 years already? Anyway, I love it but the mouth on my particular example just won't open up and I'm afraid I'll break it if I try too hard.