I haven’t picked up a G.I. Joe toy in my adult life. As a kid, my toybox was equally split between Joes and Transformers, but it was ultimately the robots which stuck with me. But damn I loved G.I. Joe. The scale was perfect. The playsets and vehicles were utterly absorbing, masterfully realized toys. I will still peruse the latest series at the toy store, but haven’t felt compelled to buy anything. Until now.

In the post-Christmas desolation of the Target toy aisles, I couldn’t resist the charms of a Zombie G.I. Joe. It was the arm-tentacles that got me.

The figure is packaged on the classic compact blister-card with a cut-out file on the back. I like the old-skool painting of the character. 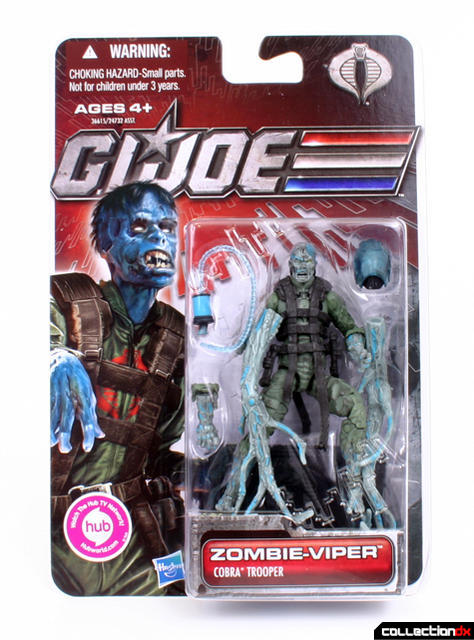 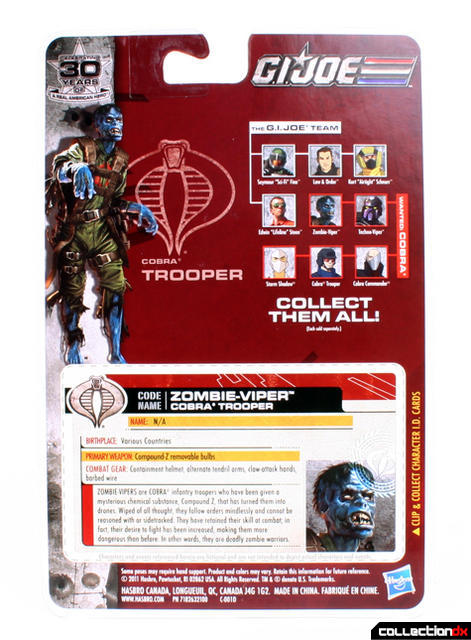 The file informs me:

“Zombie-Vipers are Cobra infantry troopers who have been given a mysterious chemical substance, Compound Z, that has turned them into drones. Wiped of all thought, they follow orders mindlessly and cannot be reasoned with or sidetracked. They have retained their skill at combat; in fact, their desire to fight has been increased, making them more dangerous than before. In other words, they are deadly zombie warriors.”

In other words, awesomeness.

My first impressions upon handling a new Joe after twenty-some years:

1. The plastic is lighter, less substantial.
2. The finishes are more matte.
3. Articulation isn’t dramatically different, but the whole thing holds together better.
4. The sculpt and paint applications are exquisite, way better than even contemporary Microman figures.

The sculpt, as I said, is amazing, packed with thoughtful details. I love those arms. They perfectly capture the zombie feel with the contorted hands. The tattered rubber uniform looks like real fabric. Paint applications are beautiful. 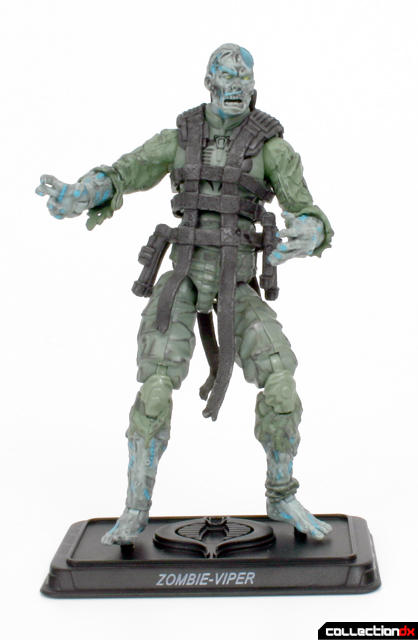 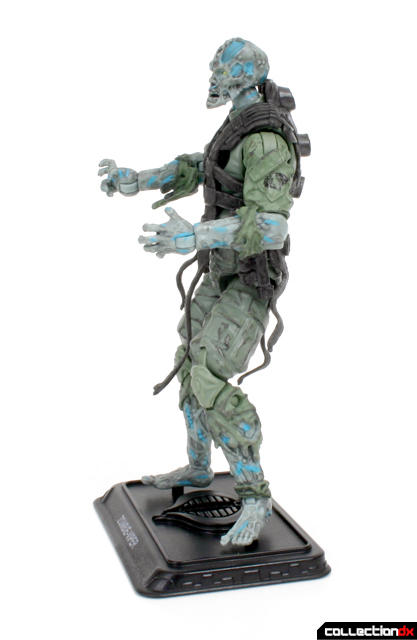 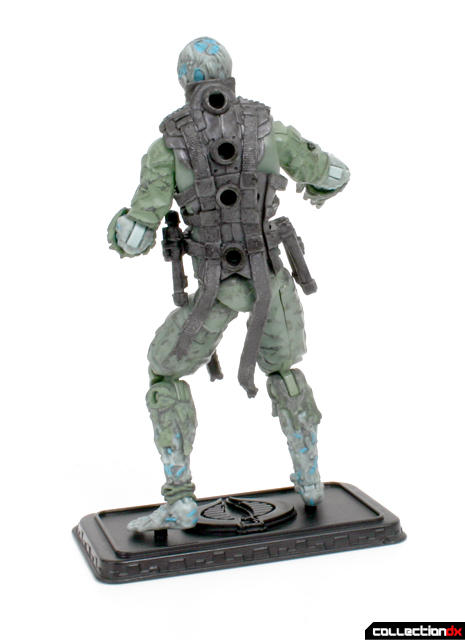 I’m blown away that this level of finish is now possible with a 1:18 figure. 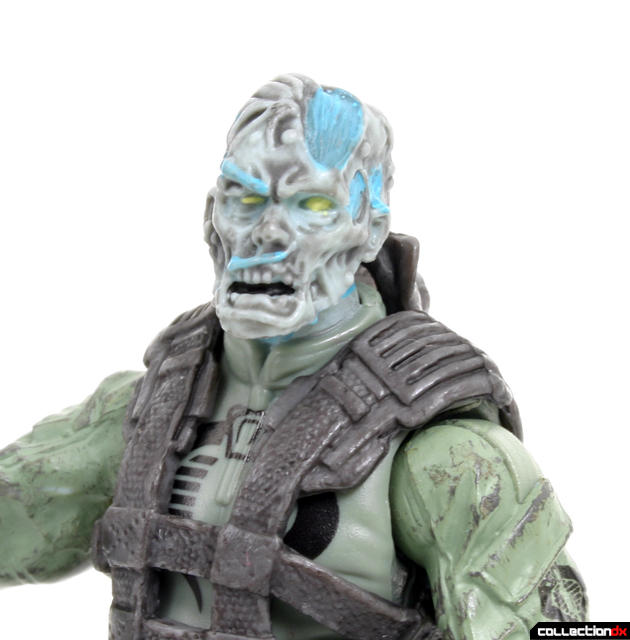 The stand is absolutely necessary for static posing, but the real fun is actually playing with the thing. Posing isn’t spectacular, as the uniform limits movement, but it always looks zombie-like and menacing. 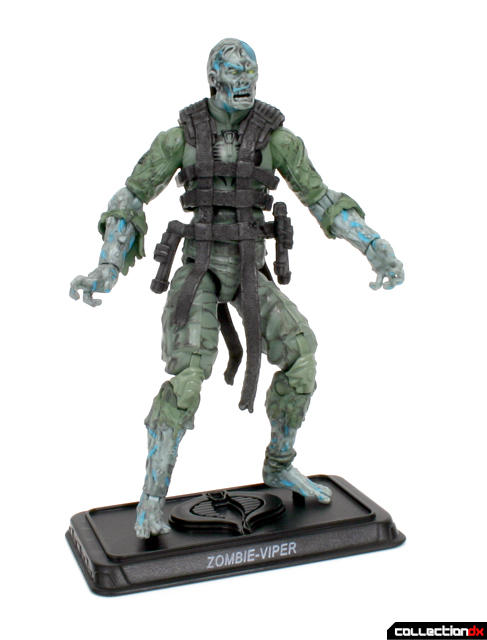 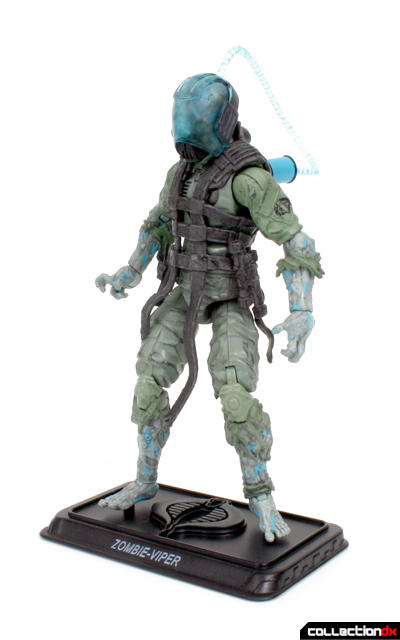 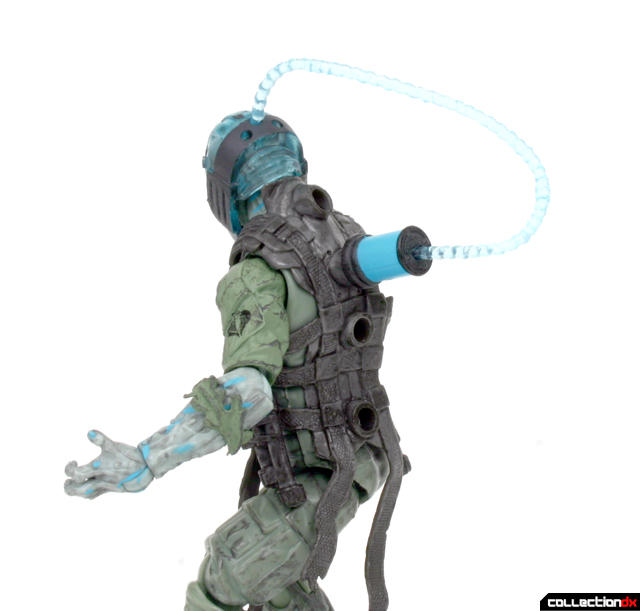 The clear helmet is a nice touch. 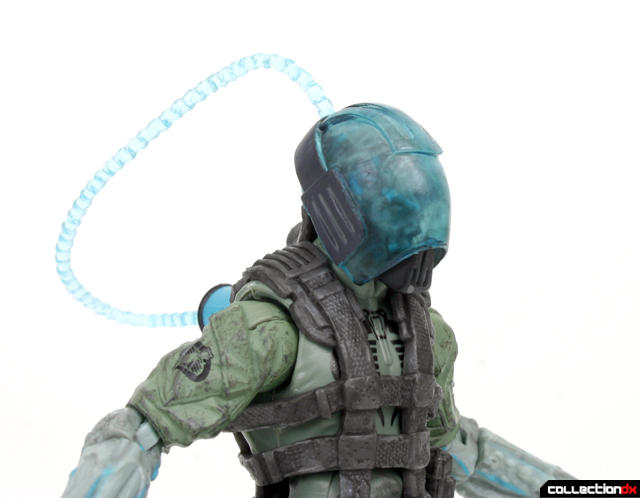 The tendril arms make the figure. 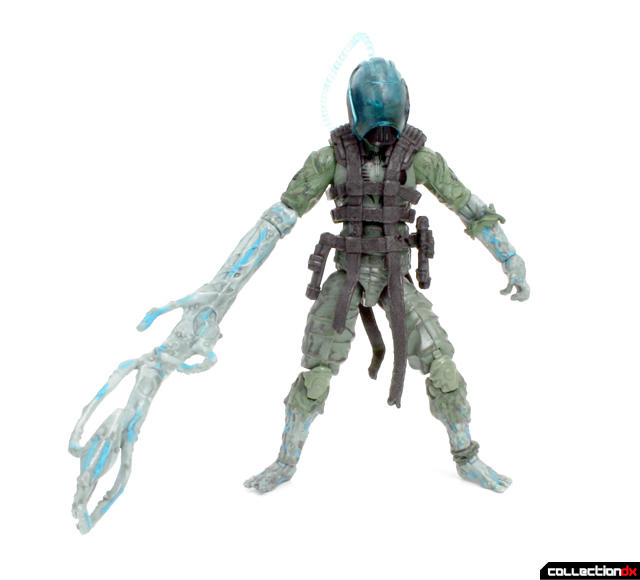 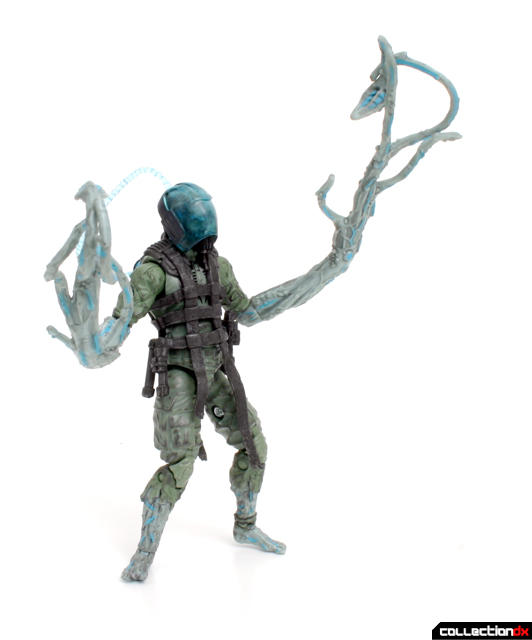 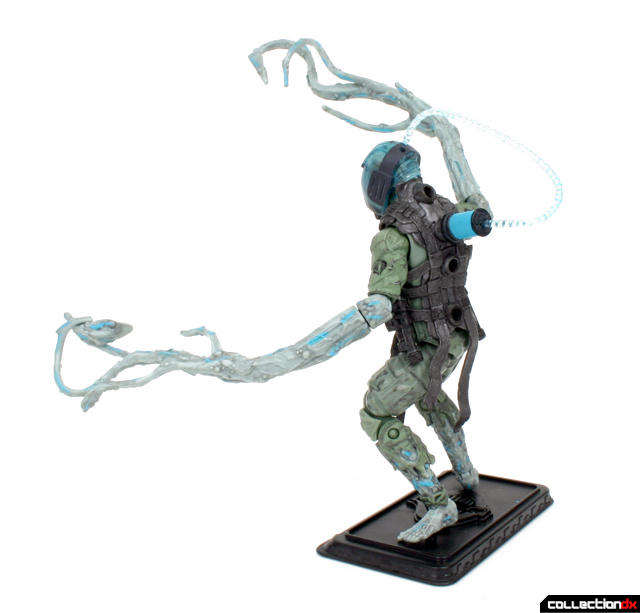 This was actually a dangerous purchase. Now that I know how great the new G.I. Joe toys are, I may have to pay more attention. A perfect figure for nerds of many stripes.

7 comments posted
I've been looking out for

I've been looking out for this guy, as he is everything you said he is: awesome.
He's just a nasty little bugger that came out of left field.
I mean seriously, zombies?! But awesome nonetheless.

Now just to wait for a redone Ice Cream Soldier...

I have also been blown away at the amazing detail of the new GI Joes. Just like in the 80's the Cobra troops steal the show. You touched on my only complaint. The uniforms are so detailed and realistic they really do restrict movement on most figures. Man, they look cool though. Thanks for the review. I hope to see more new GI Joes on the site soon.

Oh yes, AWESOME figures. I've got three already in preparation for my review on Joebattlelines and Joesightings. Plenty of jokes will be had. This things are not only rad, but hilarious! I love 'em!

The crazy arms are kind of cool, but the overall design and color scheme seem bland to me.

100% agree - The last Snake Eyes and Cobra Trooper to come out were simply awesome. Blows half the other things from any other company out of the water, for $$ vs. fun, hands down. Makes a lot of the japanese stuff look really bad IMO. And it's funny how on Y!J they pay out the nose for the new Joe stuff and Star Wars!! Just look at some of the prices from January! wow.

Plus, since 2008, with the $200ish i spent on Star Wars toys, I now have a perfect little 3.75 inch cast of Star Wars and Empire Strikes Back as well as a giant Millenium Falcon and a ton of Stormtroopers for them to fight. Like, the whole cast! And they look great, don't fall apart, good paint, a shelf dive = survival, etc. Compared to the last few years of SOC, it's night and day.

If you have any interest in Star Wars or Joe, don't be such a toy snob, and score these, because 5+ years from now, you'll be paying through the nose and cursing yourself for missing out.

Yeah Joes are still at the top of their game. Try picking up a couple of the Vipers with the chrome faceplates that came out not too long ago. That's one of my recent favorites.

The only thing I disagree with is the point about lighter, less substantial plastic. I happened to have a couple '91-'94ish Joes on my desk and they're definitely lighter plastic than the recent ones. They have slightly bulkier proportions, though, so the overall difference in weight isn't much.