Did you know there is a whole bunch of Getter Robos? Not counting each Getter's individual form or the one-offs like Black Getter and the Proto Getters there is about eight mainline Getter Robos. Most of them have been represented in figure form in some. For Getter Arc, this is its first action figure.

Cover for the second volume of the manga.

Getter Robo Ark is yet another entry in the crazy world of the Getter Robo Saga. On the covers for each manga volume, the katakana for "Ark" is written with the Siddham character for Āḥ, which is अः. Certainly a strange name for a robot. Unfortunately the magazine Getter Robo Ark ran in was cancelled. Ken Ishikawa would not have to chance to finish the manga as he passed away in 2006.

May he smile down up us from Getter Valhalla.

What better way to continue the legacy of the man Go Nagai considered his greatest friend and ally than to review some sweet robot toy based on his works. 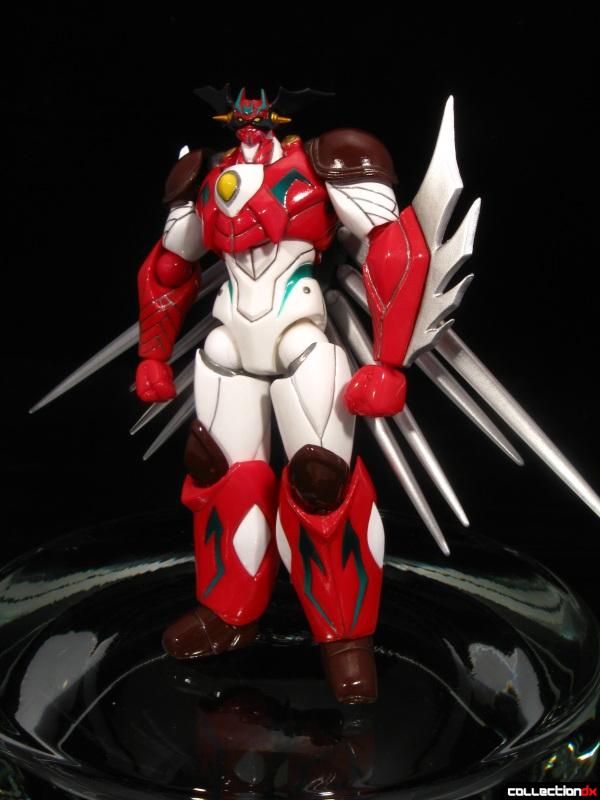 Getter Arc as it is called on the box, is the primary form for this Getter Robo. Looking like more demonic Shin Getter 1 (if that is possible), Getter Arc is a Revoltech figure that looks strong and imposing despite being no bigger than most other Revoltechs. Unlike the later Getter-1 Renewal version, Getter Arc is a more traditional Revoltech with all of its major points of articulation being done with Kaiyodo's signature joints. It stands alright when unaided with the only weakness to its stability is its small feet. Of course every Revoltech figure comes with a stand so whatevs. 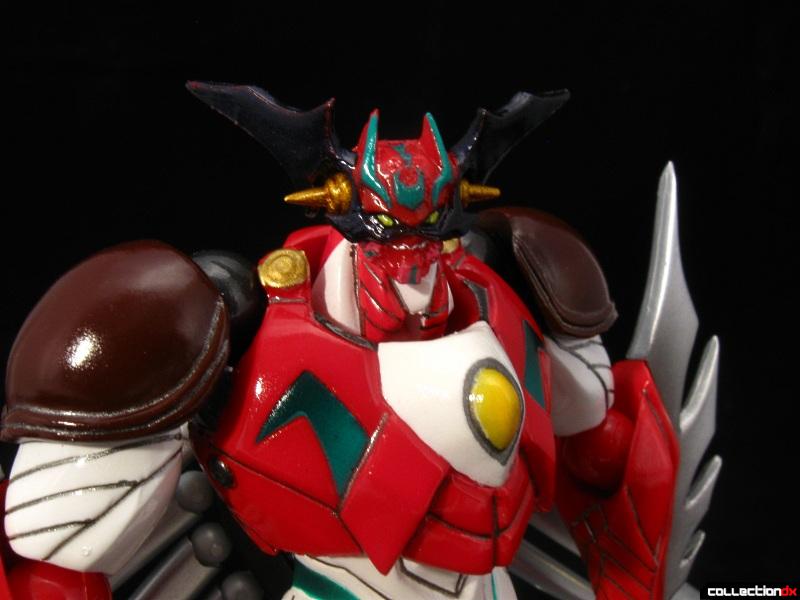 Getter Arc's normal head is like a cross between a Getter-1 and Devilman. Appropriately mean looking it sits atop the new style double-jointed neck which allows for a wide range of natural positions. 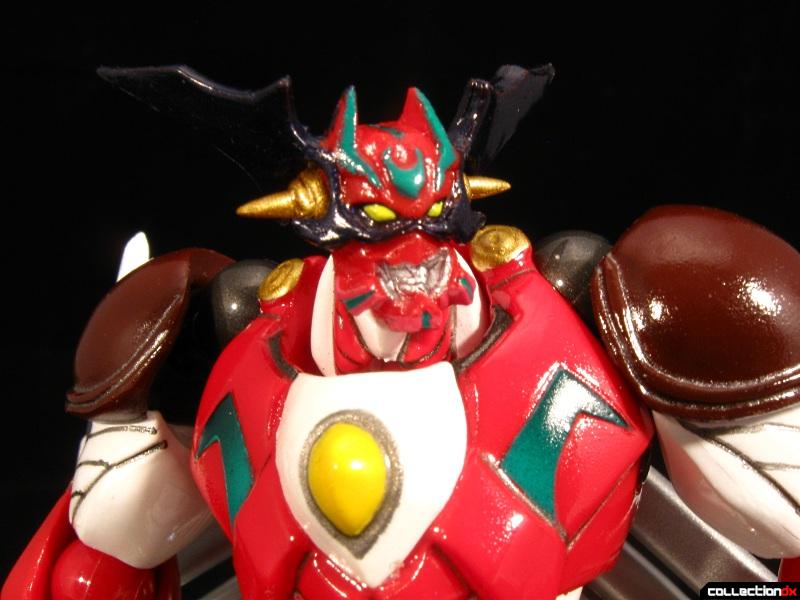 Getter Arc's optional head shows the beast with its mouth open wide for some primal rage. Unfortunately the size of the head does not allow for a clean sculpt and the messy paint isn't doing it any favors. Also the socket for the neck joint is much tighter than the normal head so it can be a little difficult to put it on. 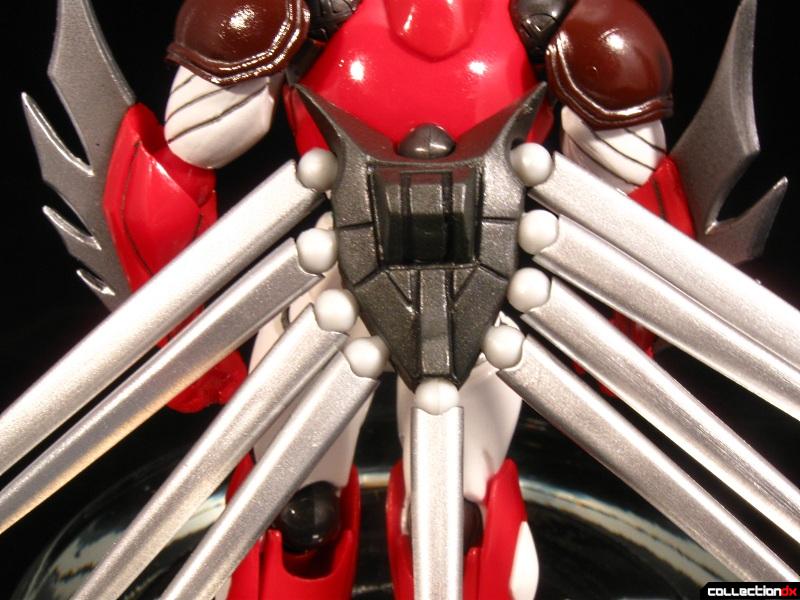 The figure's most unique feature is its Getter Wing apparatus. This gray piece is attached to the body of Getter Arc with a double Revoltech joint. Each of the semi-translucent spines is articulated with a small joint at the base. Now while this is way cool, I still have one complaint. If you look close you can see the spines are not entirely symmetrical. I know the hand sculpted design of Revoltechs is part of their appeal but come on Yamaguchi, you can learn to use a ruler. 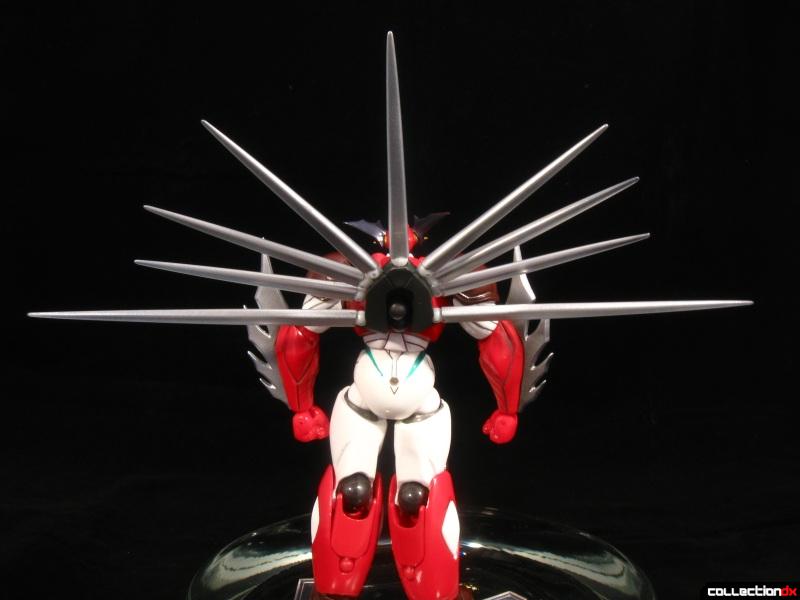 Using the double Revoltech joint you can swing the Getter Wing up into place for flight. As far as I can remember from what I saw of the manga (which had awesome things like a dinosaur Getter Robo) the Getter Wing is always deployed. Even if it comes as a separate piece in the box I dare not remove it for fear of being non-canon. 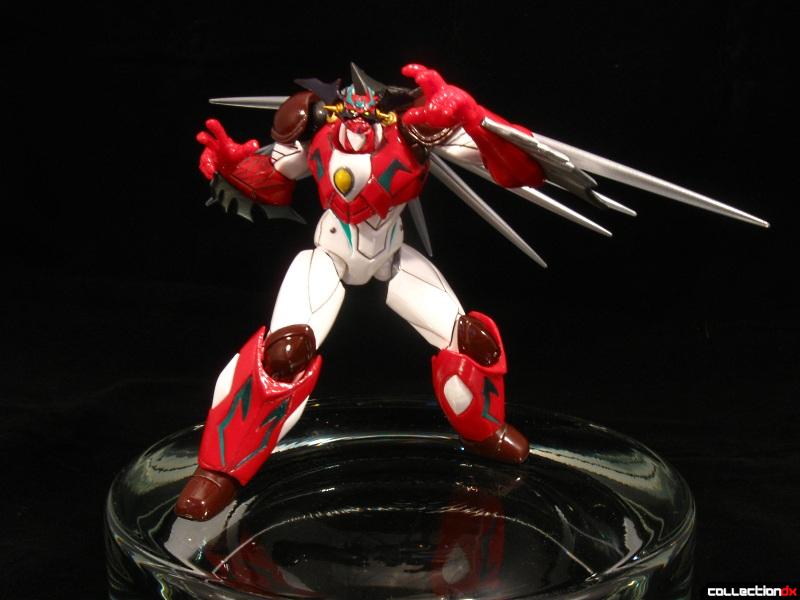 Like any good action figure, this one has some extra hands. Arc comes with a pair of Kung Fu-y hands for striking a pose. Also note that the little brown kneecaps are hinged for covering up the knee joint. 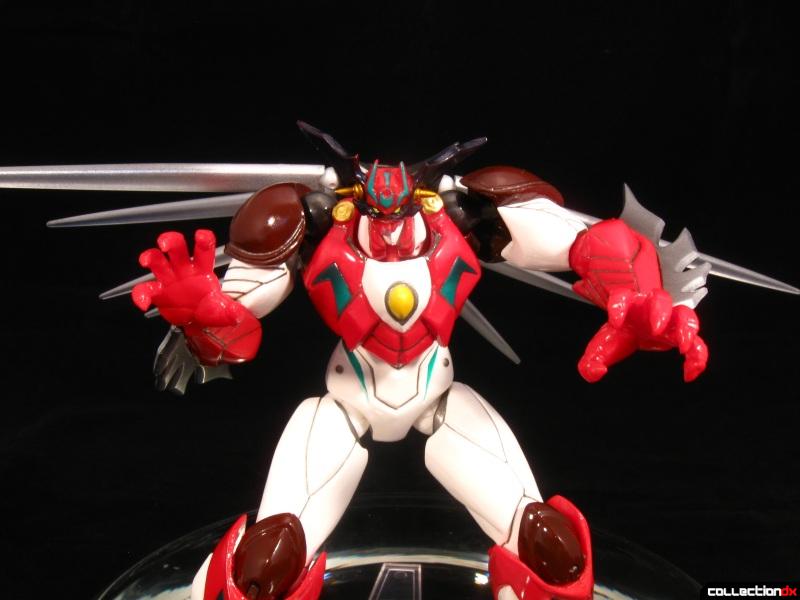 Arc also has a set of splayed hands with little claws sculpted into the fingertips. 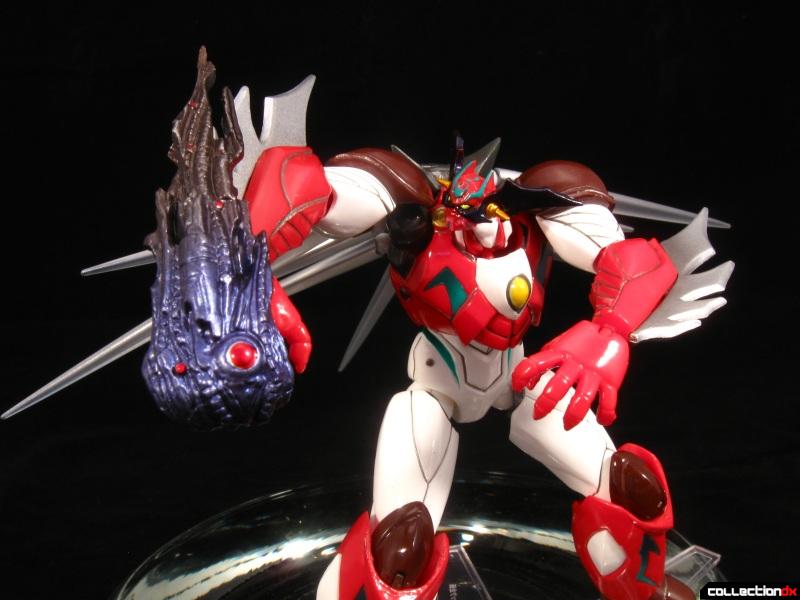 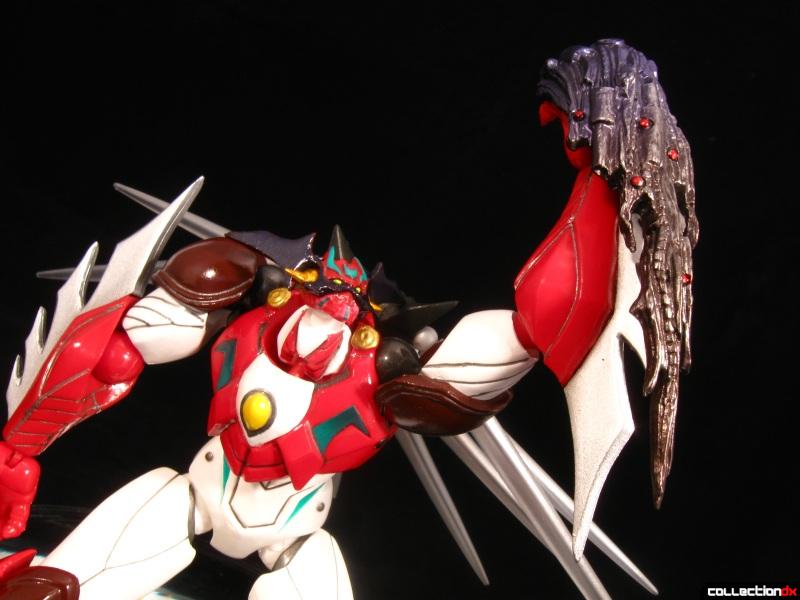 To accentuate the clawed hands, Getter Arc comes with what I can only describe as mechanical giblets (techlets?). These let you display Getter Arc as it's tearing into an opponent to see what makes them tick. While each swath of mechanoflesh is well detailed and well painted with a nice paint fade they do have one weakness in how they connect to the hands. You simply jam the fingers of each hand into their respective hunk of baddie while hoping that the shock wave of each mighty Revoclick does not dislodge the effect parts. 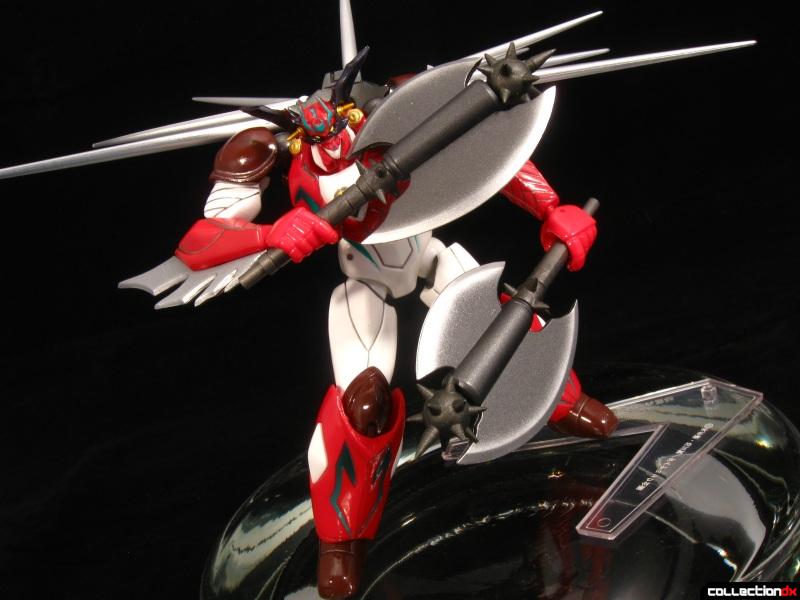 Getter Arc has some sweet Getter Tomahawks. They look cool and their spikey bits are appropriately pointy for a Japanese toy. 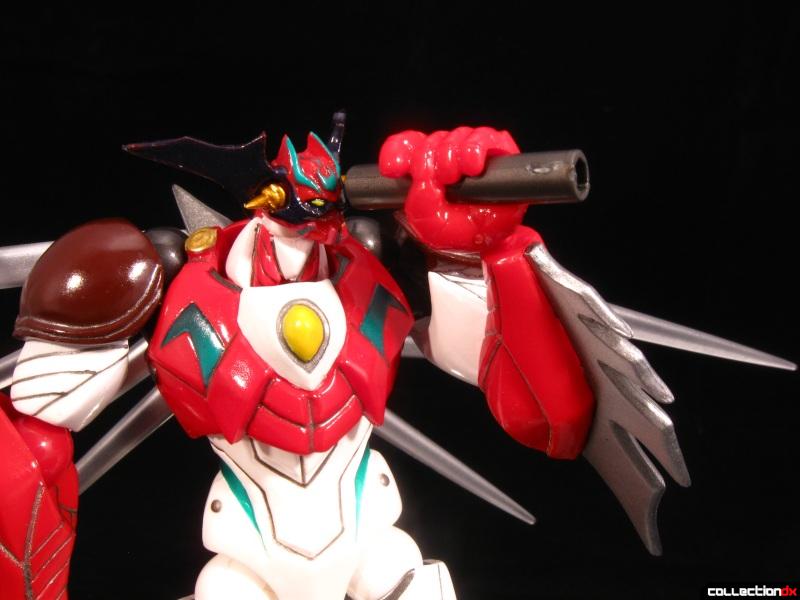 Just for fun, Getter Arc comes with a paper towel tube telescope for seeing mutant robot creatures that are far away. 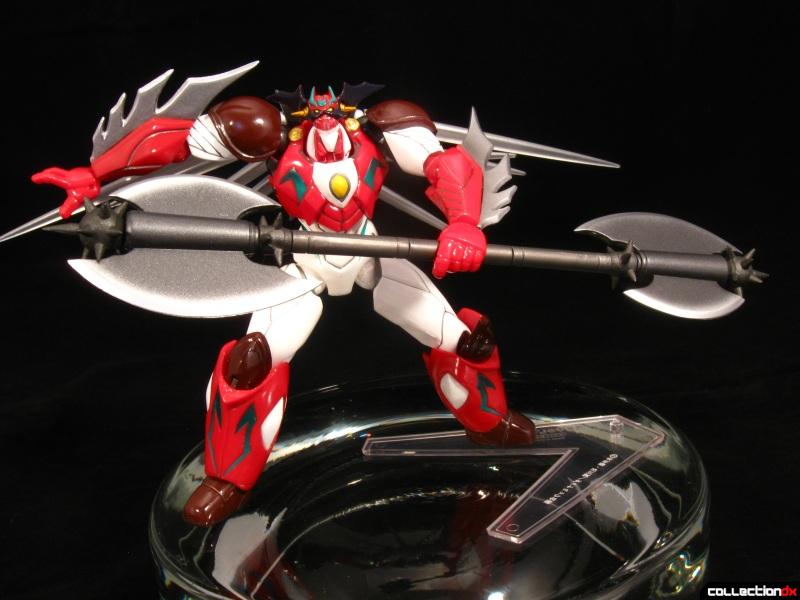 Oh and the telescope also lets you plug the tomahawks together for some Double Tomahawk action. 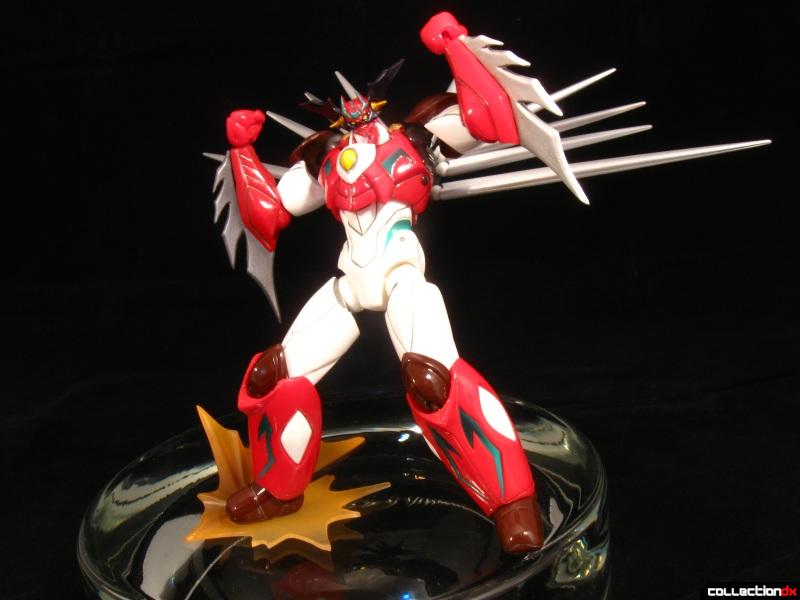 And one! Two! Three! Action stamp! It's painted differently than the last figure I review and helps your robot stand up. 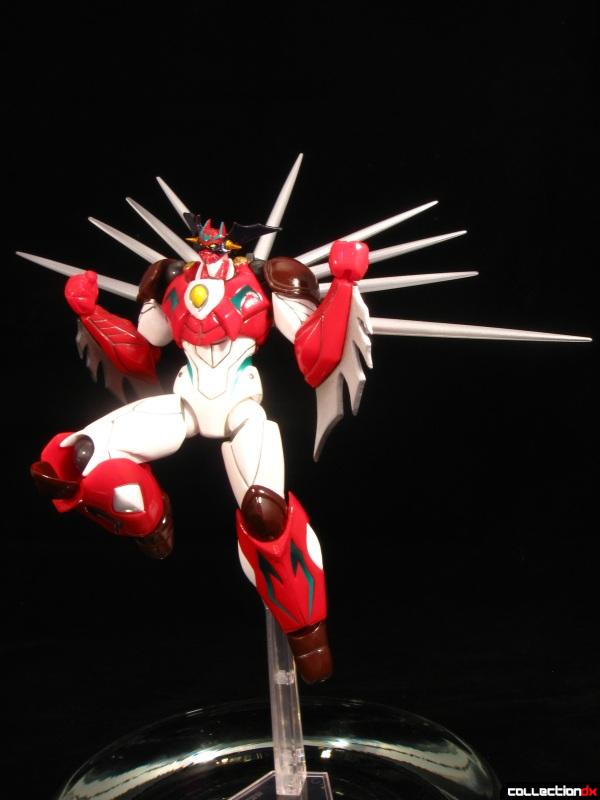 You also get the double whammy of the clear Revoltech stand with flight arm and extension piece. This allows you to make Getter Arc fly and perform its ultimate attack: THUNDER BOMBER! 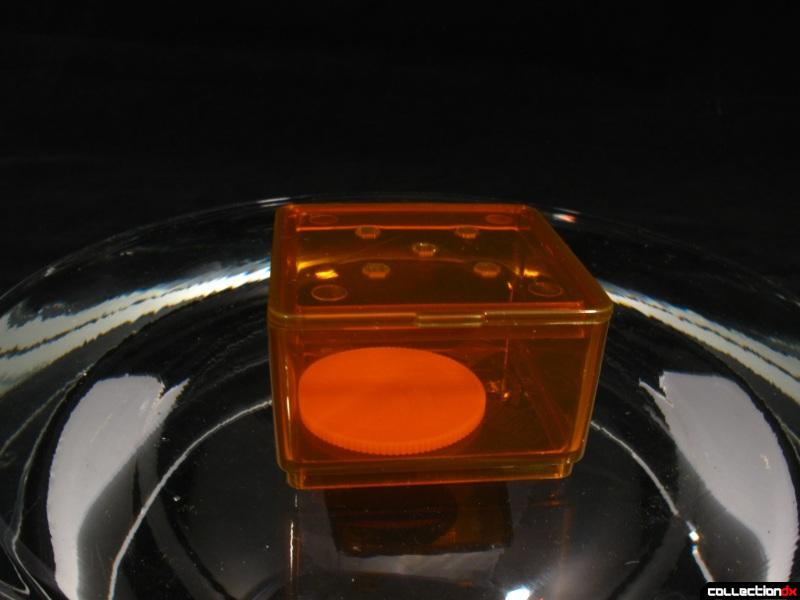 And of course you get a Revocontainer which exists only to store the Revochip. I know you think you can put other things in there but the Revochip needs its space.

So as Getter Arc's first action figure, this Revoltech is a good one. It doesn't have any of the weird design choices as the Getter-1 Renewal Version which allows it to be a much more solid figure. While it doesn't do anything unexpected, it also doesn't do anything wrong either. Definitely a must have for Getter Robo fans.

This is a very interesting robot design--I like the Ark take on "modernized Getter Robo" much better than what they did with Neo Getter (who looks like a stuntman from Gao Gai Gar.)

One thing I've noticed is that Ark's feet have a tendency to slowly deform if you put a stand peg into them. The foot-holes in my toy have become noticeably oval-shaped due to one pose I put him in, and that was only for a week or two!

There was a black repaint version released as a Hyper Hobby exclusive. Unlike previous "black repaint" versions, this one doesn't come with any different accessories; it's the same packing as the basic toy, just with everything in a different color. I was kind of hoping for the Metal Death Umbrella that Ark has, but no dice.

Again, I've got some comparison shots of the basic toy and the repaint version in my gallery.

Also, note that the toy box gives us yet another interpretation of the romanization--"Arc"

This was essentially the post I was going to make on the Black Getter news thread.

"Don't get me wrong, I love Prof. Robo's works, and think it an enormous loss that we weren't given the chance to watch his style further evolve, but teeth on a Getter is still a completely ridiculous addition."

MAN those Getter robots are always crazy lookin'! Every time someone reviews one on here it looks like it's even larger and spiker. Like the designers get together, make a new Getter design, and one or two of 'em look at it and go: "Eeeeehhh....give it a little more BATSHIT CRAZY and you're golden!"