Those guys at Kaiyodo are really fond of Getter Robo. The various Getters are second only to the more plentiful Evangelion figures as far as presence in the Revoltech line. Much like the RX-78-2 Gundam or VF-1 Valkyrie, Getter 1 is the most recognizable of its brethren and as such gets the most attention. In fact, the toy I am about to review of Kaiyodo's fourth attempt at a Getter-1 action figure. First there was the Robot Museum figure, which is a figure I have and it totally broke in half. Next came the little K&M trading figure. After that was the first Revoltech Getter 1, which I did own in the Black Getter variant. Now we're up to today's figure, the Revoltech Yamaguchi series Getter 1 Renewal Version. 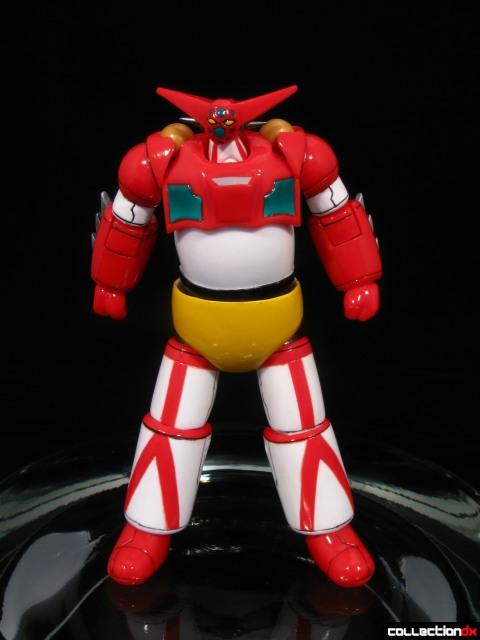 So Getter 1 is about average size as far as Revoltechs go. He's about 12.5 centimeters tall according to the box. Definitely designed to be hand candy. As far as its stature goes it has one issue. Getter 1 really can't stand up straight unaided because its feet in the most neutral position are still pointed slightly downwards. It's a shame since most modern Revoltechs got the whole neutral stance thing down pat. 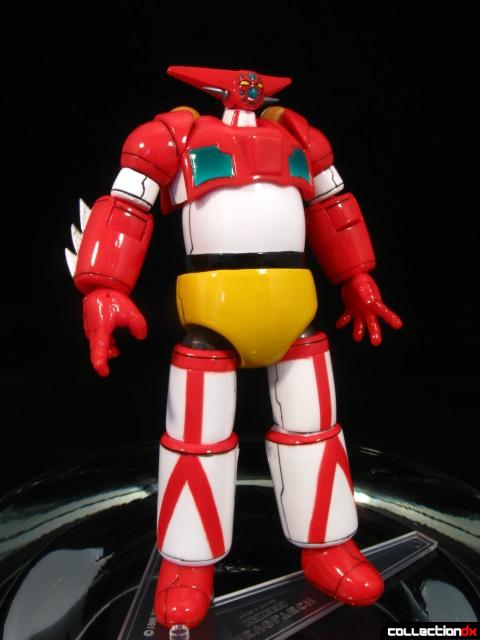 Popping Getter 1 on the display stand does let you get a more natural pose. Also check of them splayed hands. Swapping hands on this toy is very easy as each hand simply pegs in with a small post. There's even a little hinge in the wrists for extra movement. This is definitely an improvement over the first Revoltech Getter 1 where the hands were very hard to swap out. 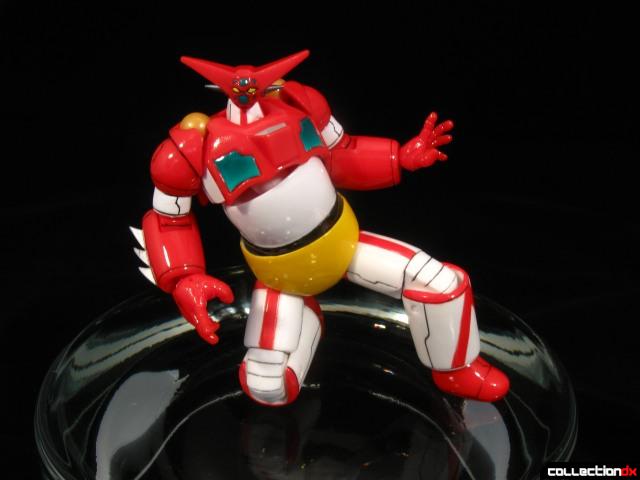 Getter 1 has the usual assortment of joints with ten Revoltech joints distributed across its body. I'm used to Revoltechs using that little double Revoltech joint in their necks but Getter 1 just uses a balljoint and a small Figma style joint for the head and neck. It's definitely more flexible this way although Getter 1's head is a little loose. Oddly enough the knees do not use Revoltech joints, instead they are a simple hinged knee with a cut in the calves to allow a deep bend. Because of the sculpt, Getter 1 has some gaps where the upper body connects to the torso. Also the main body itself is asymmetrical which is weird. There is a Revoltech joint connecting the mid torso the yellow waist area but it doesn't move much. 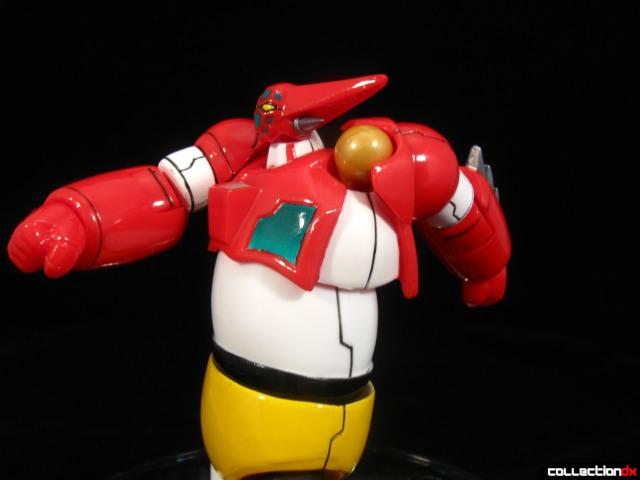 Probably the weirdest thing about this figure is how the shoulders are jointed. The caramel colored spheres on Getter 1's shoulders are actually Revoltech joints. As a result, part of the red torso area is actually a part of the shoulders. This can look unnatural from certain angles but it does afford a good range of motion. 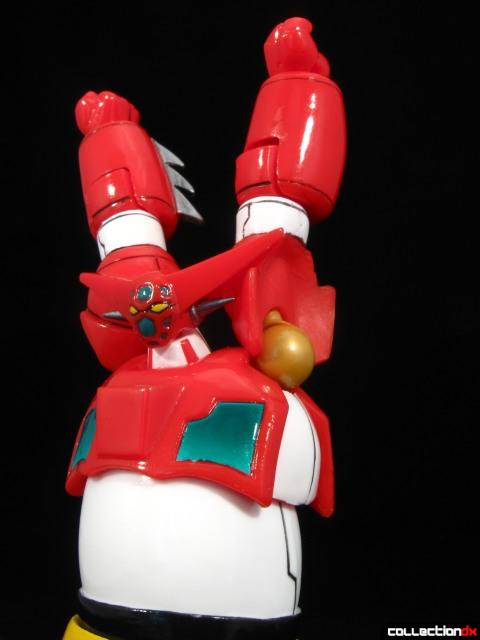 Just don't pose Getter 1's arms all the way up. These armpits are not sexy at all. 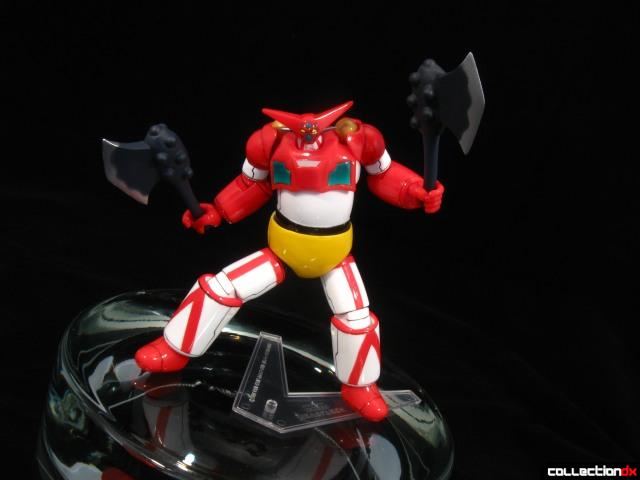 Accessory wise, Getter 1 includes a pair of hands for holding its signature Getter Tomahawks. The tomahawks slide into the hands with little effort. It is way better than the first Revoltech Getter 1 in where the hands gripped the weapons so tightly they would break the handle of the tomahawk off the head. I know that's what happened to my Black Getter. 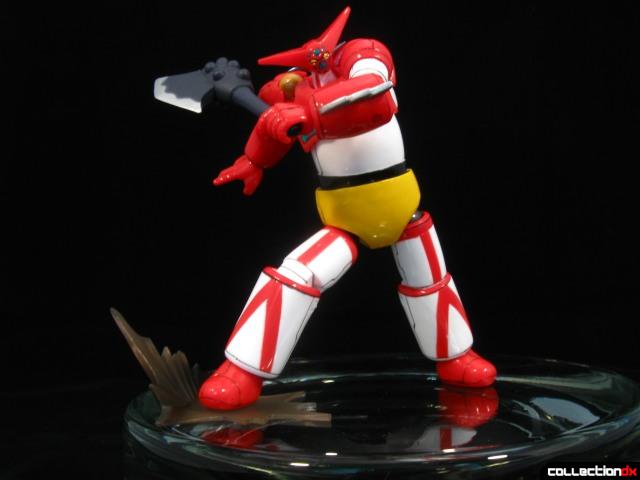 For stability without the regular stand, you get Kaiyodo's new favorite gimmick the "action stamp." It's supposed to look like the robot is sliding its foot along the ground and kicking up dust but I think it looks silly. 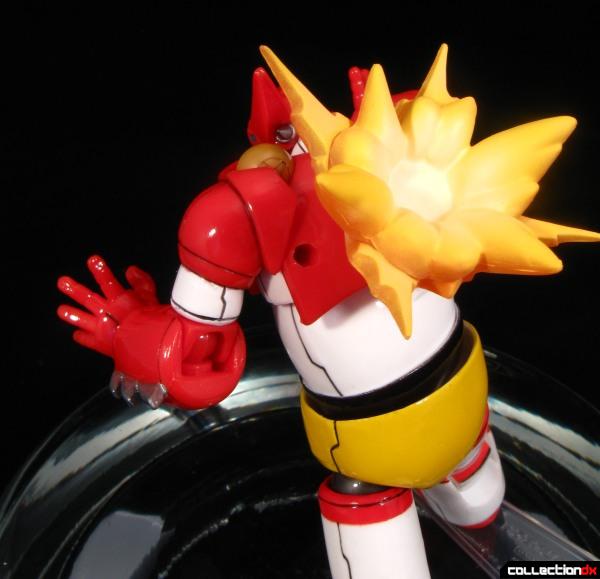 As an effect part, Getter 1 comes with a dangerously cheesy explosion. It has its own Revoltech joint so you can peg this into the back of Getter 1 or onto the the Getter Wing pieces. 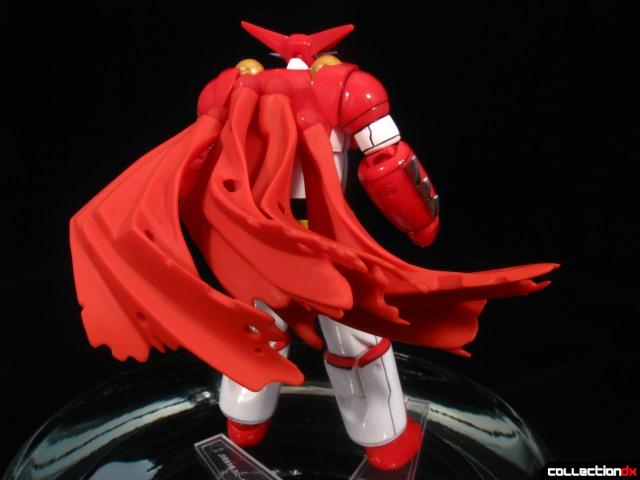 Speaking of the Getter Wing, this Getter 1 has a rather unique approach to replicating the effects of a flowing cape. Rather than being one solid piece, the Getter Wing is made of four uniquely sculpted parts that are meant to overlap to form the image of a single cape. The idea is really cool but the execution is kind of lacking. The overall effect only looks good from certain angles. Also the promotional photos totally lie to you as there is no way Getter 1 is standing unaided with big chunks of PVC stuck to its back. 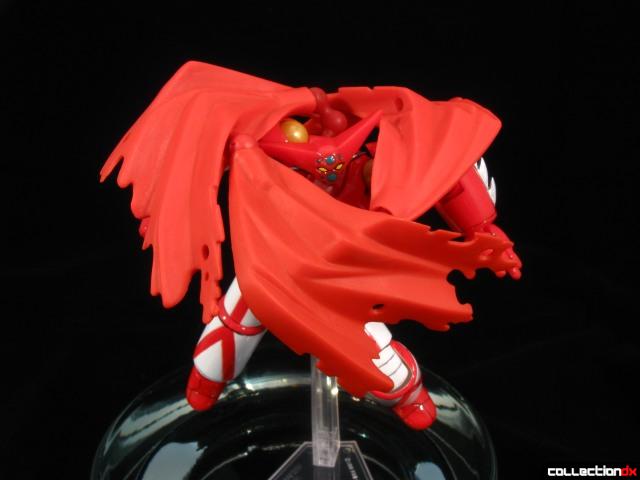 Each cape piece has its own Revoltech joint with an extra double-joint provided for even more options. By using the holes in each cape piece you can create all kinds of poses where the cape is wrapped around Getter 1 in different ways. 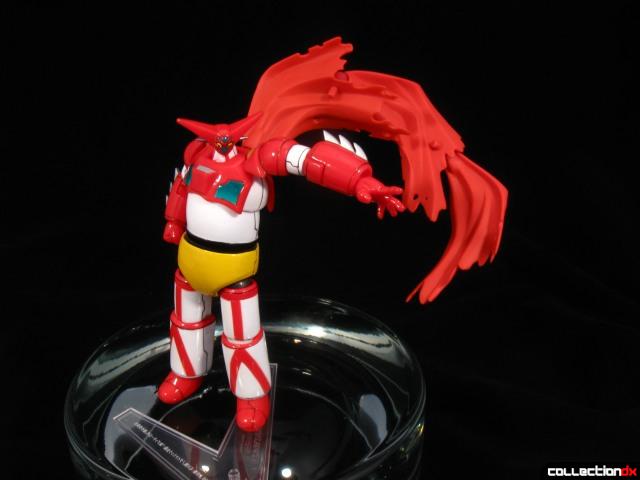 With a little fiddling you can stretch the cape into one long scarf. Be aware that gravity is not kind to this configuration. 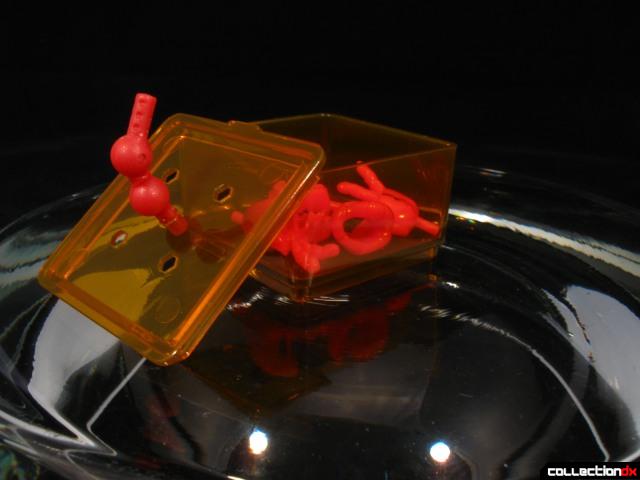 Oh and you totally get a Revocontainer which can only hold the hands. You can plug spare Revoltech joints into the lid too but eh whatever. I usually leave this little box in the box or I put the Revochip in there because I'm a foreigner and can't actually cash in Revochips.

Ok this last accessory is something you cannot be ready for.

I don't think you're ready.

Ok let's look at it. 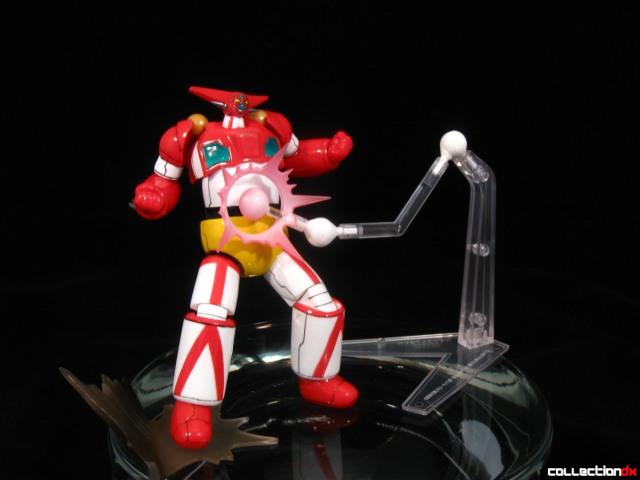 GETTA BEAM fail. Yeah so the Getter Beam effect doesn't actually plug into Getter 1's belly. You have to use the entire stand and the extension piece to just position the effect in front of Getter 1. And then I guess you're supposed to photoshop the stand out of the picture. We don't have photoshop for reality (yet) so for display purposes this is a pretty big miss.

8 comments posted
This revoltech is just such

This revoltech is just such an oddity. At the first few pictures it looked really awesome and I was super excited for it. Now, it seems less like a step forward and more like a step sideways... It's just so odd and I don't know how to feel about it.

"I put the Revochip in there because I'm a foreigner and can't actually cash in Revochips. "

You could drill tiny holes in them and make a charm bracelet!

What we need is a Revochip piggy bank in the shape of Raoh's horse.

My toy's head is really floppy, too. This is definitely a "set it and forget it" kind of figure (although the neck design does allow a better range of poses than the original one.)

The newer Revo's do seem to be rather accessory-light.

The Getter Beam effect is exactly as lame as VF5SS describes it.

I put some comparison shots of this one and the original version in my gallery: http://www.collectiondx.com/gallery/v/Collections/RobotBastard/

One odd thing to note is that this version of Getter 1 is *FAT*. Like, the torso is about twice the volume of the original one. I guess that's a little more anime-accurate, but it makes him look like a porky middle-aged version of the character.

It should be noted that the "cape" is a soft-vinyl material, rather than the hard plastic typically used in Revo's.

I will say that this version of the toy has better-looking axes. The ones on the original were kind of dinky-looking (although I guess they were in anime-accurate scale.)

Accessory count seems to come in waves. They start off light and then make more stuff that nobody wants. Then they cut back and overshoot. It's all about balance.

I mean it's not like what Vange1us thinks like there's this magic number for each figure and each accessory or gimmick excludes the inclusion of another.