During the Cold War, America's allies in Europe were just a stone's throw away from the reach of the Soviet Air Force. To counter this threat, several aircraft manufacturers joined together to develop what was called the European Combat Fighter for use all across the continent. In 1992 this airplane was renamed "EF-2000" and was eventually called the "Eurofighter Typhoon" upon entering service. Similarly, the Muv-Luv universe suffers from an even greater threat coming out of Asia as the implacable BETA aliens occupy most of the continent. So in the same manner other real world aircraft have been re-imagined as sweet robots, the Eurofighter Typhoon is now a Tactical Surface Fighter called the EF-2000 Typhoon.

Long story short, I got a new Muv-Luv toy to have fun with! 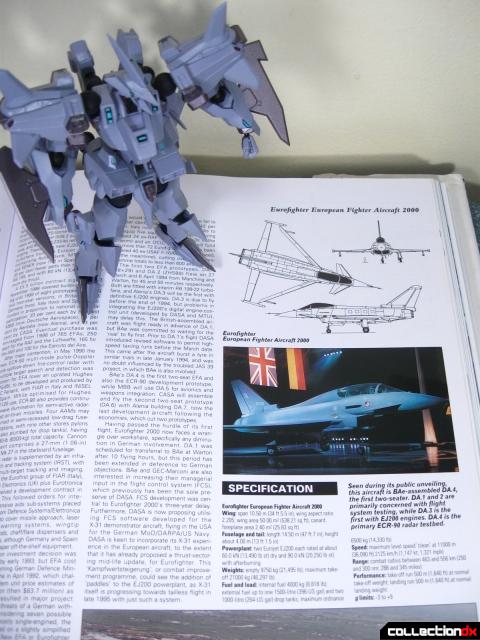 The real life Typhoon was born out of European engineering and its expertise in making delta-wing airplanes. Since the Muv-Luv machine's namesake is essentially a big flying triangle, I was curious to see how the Tactical Surface Fighter version would capture the essence of the actual airplane. 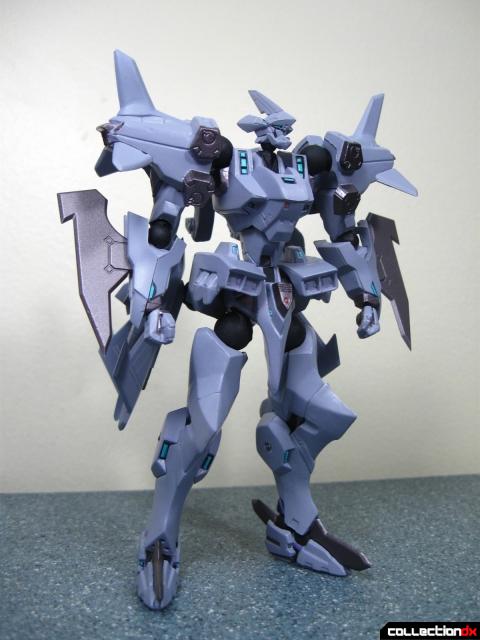 You see? I think it's because a delta-wing plane kind of looks like an arrowhead or a blade so covering the robot in sharp things is basically the same thing! Ingenious!

Anyways, the Typhoon is the second to last Muv-Luv Alternative Revoltech body type I had yet to acquire. So with this toy, I only need the standard Shiranui and I'll have at least one figure of each kind. It's a shame the line quietly ended because I was eager to see more.

My misty eyed lamenting aside, the Typhoon is another great figure in the Revoltech line. It stands roughly five and a half inches tall and is made out of thick PVC plastic. It's neutral gray coloring is done entirely with paint apps. This particular Typhoon is part West Germany's JA44 Zerberus Bataillon, hence the name "Cerberus." These guys are featured primarily in the Euro Front side story which is spread over several photo novels and an extra visual novel called Muv-Luv Alternative Chronicles 02. I've not had a chance to read up on this material, but I'm sure it's full of lots of gratuitous German and sweet Taktischen Einsatz Bodengestutzte Kampfflugzeug battles. 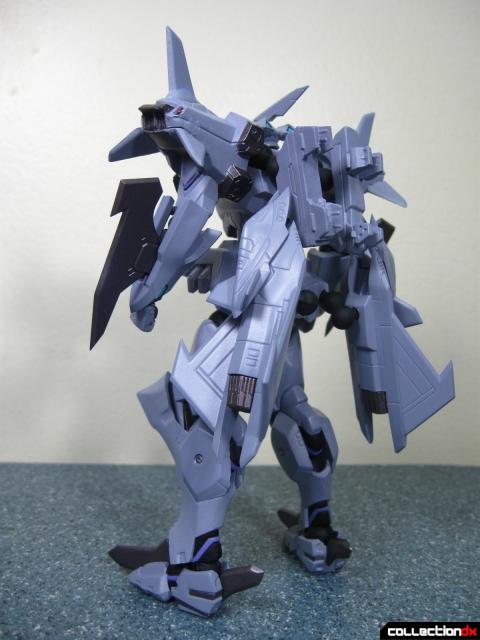 Like all of the Muv-Luv Revoltechs, the Typhoon is pretty good at standing unassisted despite its numerous rear quadrant equipment. Admittedly while the figure is nicely detailed, it could use some quick work with a pencil or Gundam marker to bring out all the little panel lines. 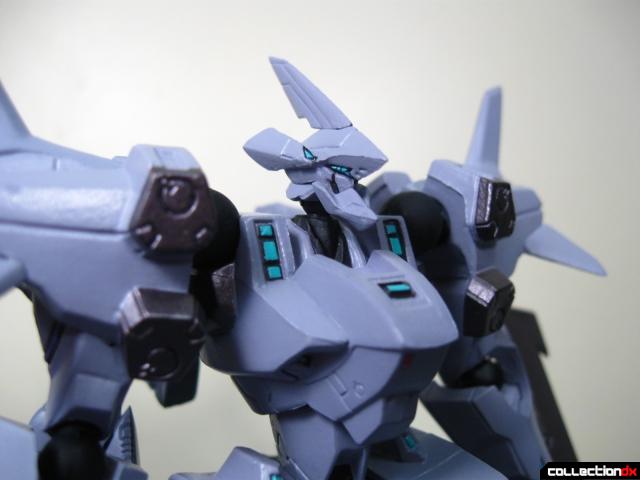 The Typhoon's smooth (yet pointy) design echoes that of its namesake with numerous areas on figure being inspired by the real life fighter jet. For example the large head crests resembles the Eurofighter's tail fin and the shape of the face is styled after the front of the airplane. Moreover, the shoulder pauldrons have a pair of canards and an additional tail fin which when combined with the canopy like bulge on top and a pair of false intakes makes each pauldron look like the front fuselage of the airplane in question. Interestingly enough, the Typhoon's narrow blue eyes are multi-segmented with small vertical breaks along their surface. That's a nice little touch. 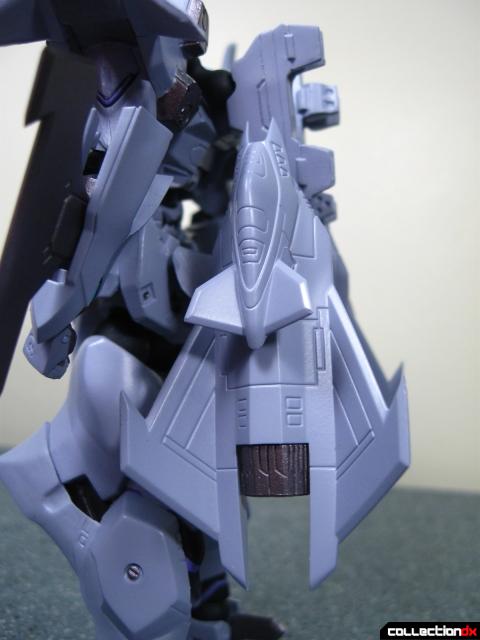 Every TSF comes with a good pair of jump units plugged into its waist to let it do cool robot stuff. The Typhoon's own unique jump units look like a small drone versions of the real Eurofighter. I appreciate how the wings on the jump units have forward swept tips just to make sure they'll catch and tear through anything that gets near them. Way to weaponize the entire robot! 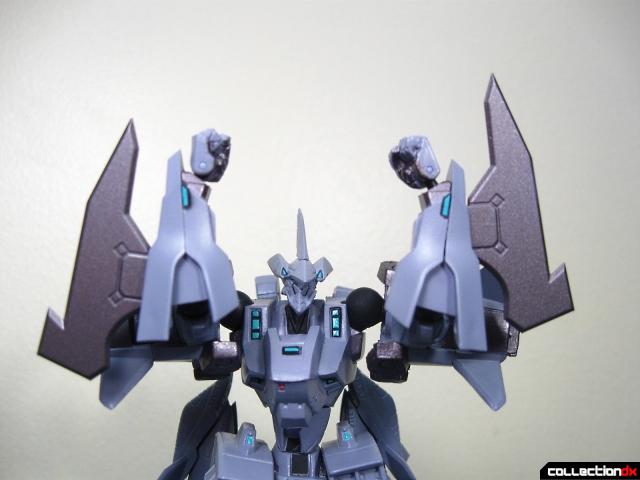 Officially referred to as "Multi-Purpose Armor," these big ol' knives on the Typhoon's forearms feature a handy little gimmick. They're mounted on a small track that allows them to slide up or down the arm so they won't interfere with the figure's articulation. It's kind of amazing how all the sharp protrusions on the Typhoon barely get in the way of each other if at all. 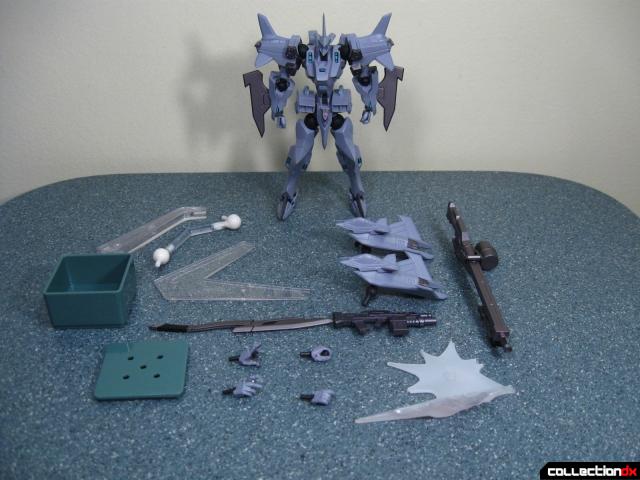 The Typhoon comes with the typical Revoltech figure load out that is enhanced by the inclusion of the massive Mk. 57 Squad Support Gun. 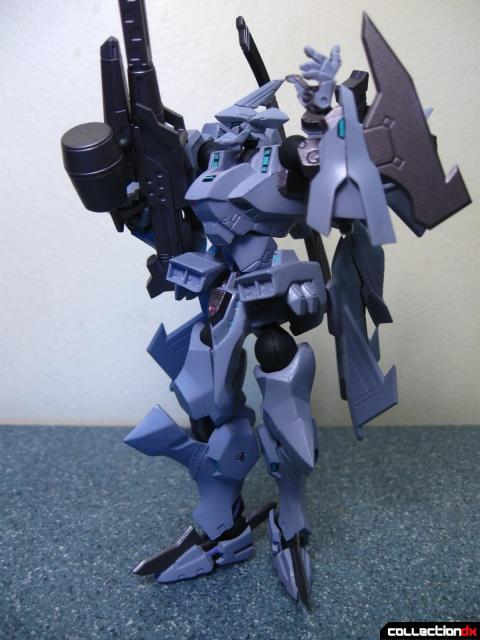 One thing I luv about the Typhoon is how all of its weapons fit comfortably all over the figure. Even the massive Mk. 57 gun can be held up in just one hand. Although, the peg for the gun holding hand may need a little thickening for extended one armed posing. I find the overall (and literal) sharpness of the design exudes a kind of suave smugness. Like Typhoon pilots know their TSF is truly wunderbar and are sure others already know that at first glance. 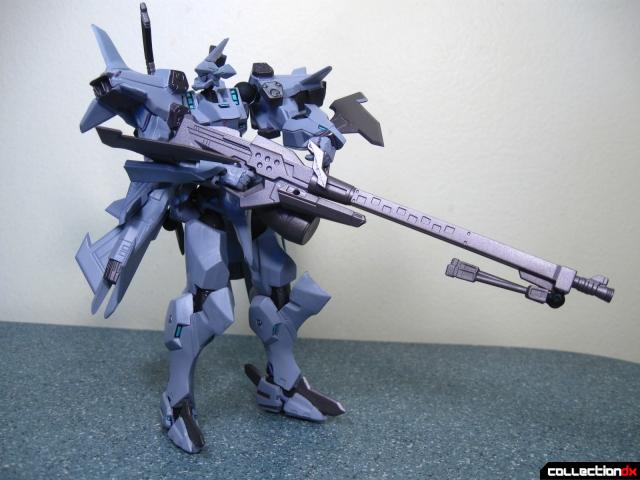 The huge Mk. 57 Squad Support Gun is about as long as the figure is tall. It's function is similar to the real life Rheinmetall MG3 general-purpose machine gun its based on as it provides a TSF with heavy firepower in a portable package. 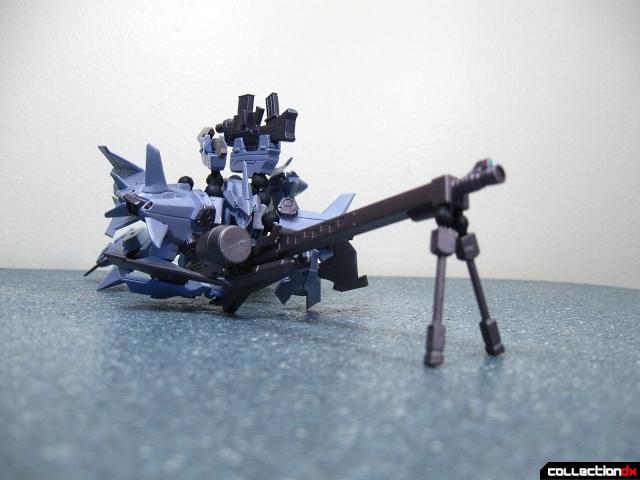 The gun features a working bipod at the tip, a usable handle on top, and a removable drum magazine that can be plugged into either side. The drum attaches with its own tiny Revoltech joint for extra flexibility and smooth removal. 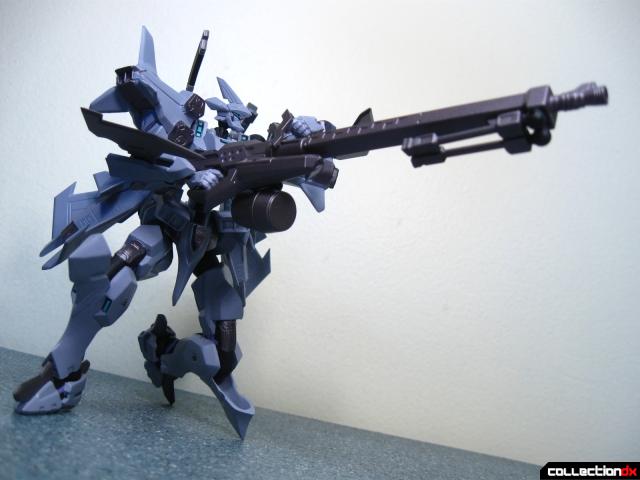 You wouldn't think it, but it's pretty easy to get the Typhoon to hold the Mk. 57 with one hand on the pistol grip and another on the hinged upper handle. I found the best way to do it is to thread the hands over the grips and then attach them to arms. When it's all set up, the figure looks really great. I think this calls for some gratuitous outside photos! 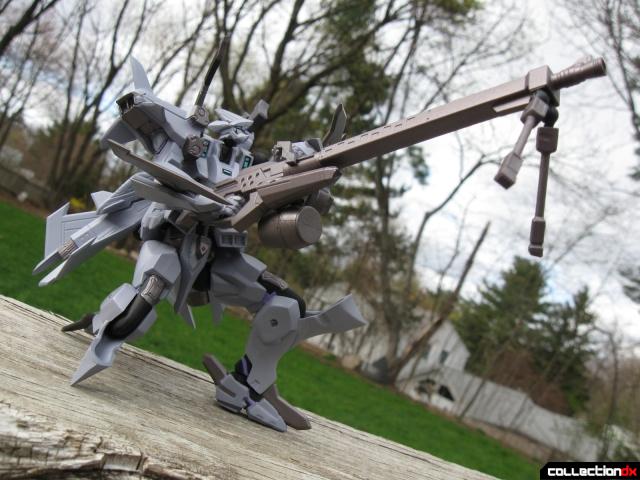 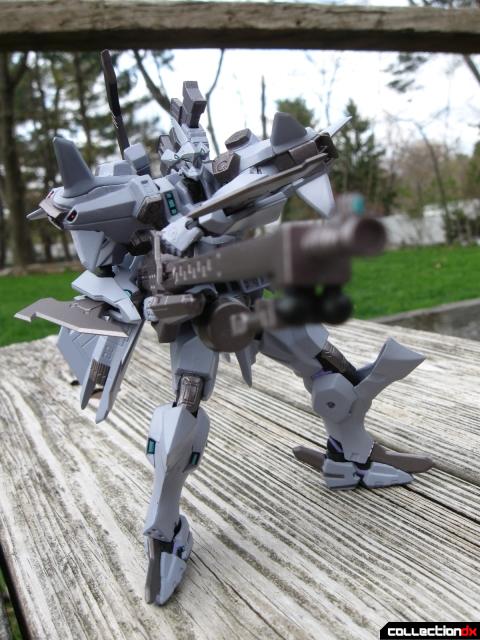 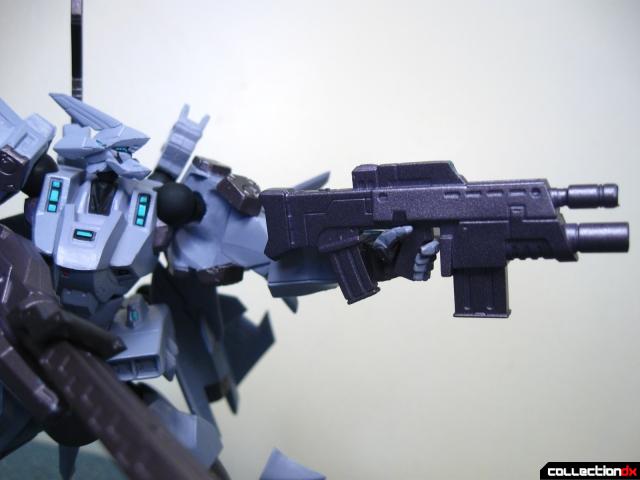 Like all TSF's, the Typhoon is also armed with an assault cannon. This figure in particular comes with a GWS-9 Assault Gun which is based on a few real world guns like the H&K G-36 and the Enfield SA80. It's a nice and detailed little block of gun that looks good n' Europe-y. 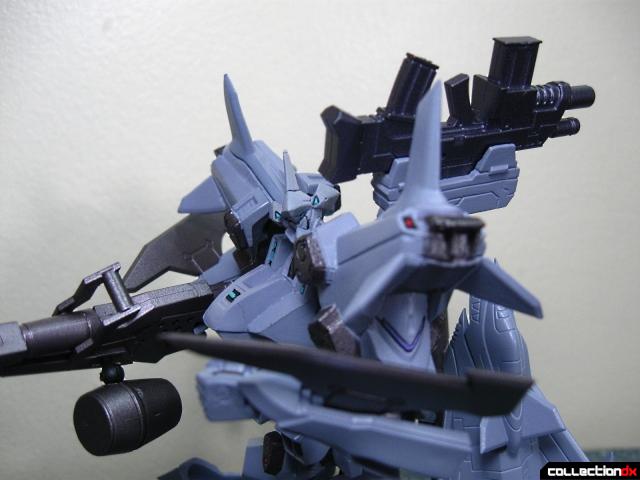 It comes with its own mount pylon for back mounted firepower. 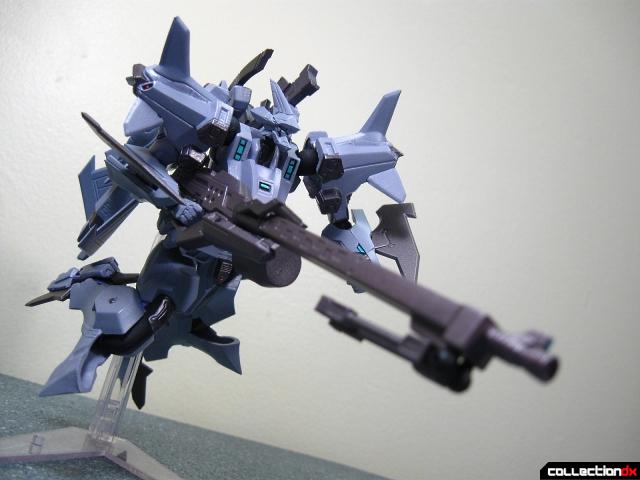 The included Revoltech stand lets the Typhoon do some NOE flying. 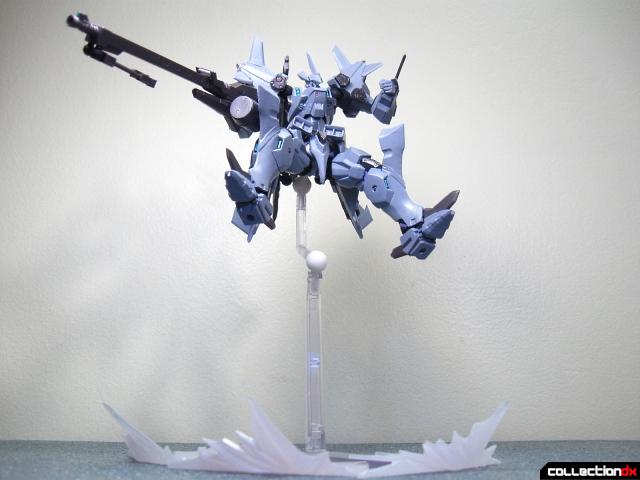 Long time readers of my Revoltech reviews may know that I'm not too big on those "action stamp" base things. However, now that I have a bunch of them I actually found a good use for them! Just set them up in a semicircle in front of the figure for some hot VTOL action! Who needs Bandai's effect parts when Kaiyodo just keeps throwing them in with their toys whether you want them or not? 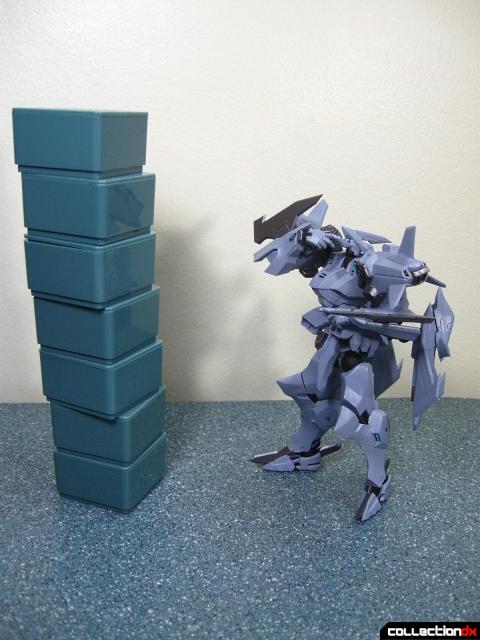 "Ach! I should invest in a label maker!"

The Revo-container is always useful for storing the figure's extra bits. In this case only the Typhoon's optional hands fit inside the little plastic box. While I appreciate the verisimilitude given by opaque gray containers, it is getting kind of hard to keep track of everyone's stuff... 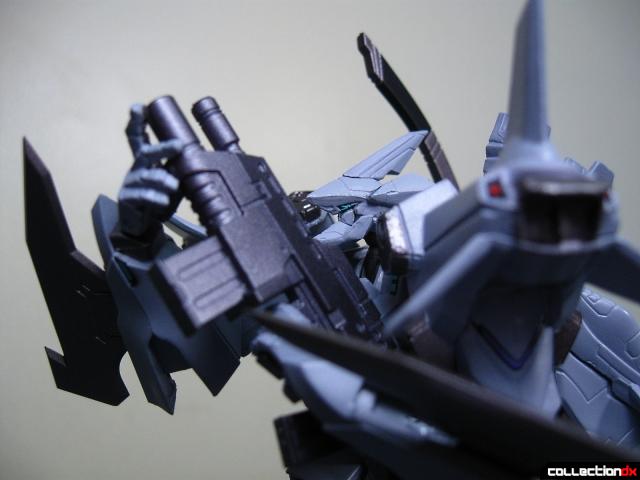 During cold winters along the Rhine, a soldier's only comfort is a warm gun held by a huge robot. 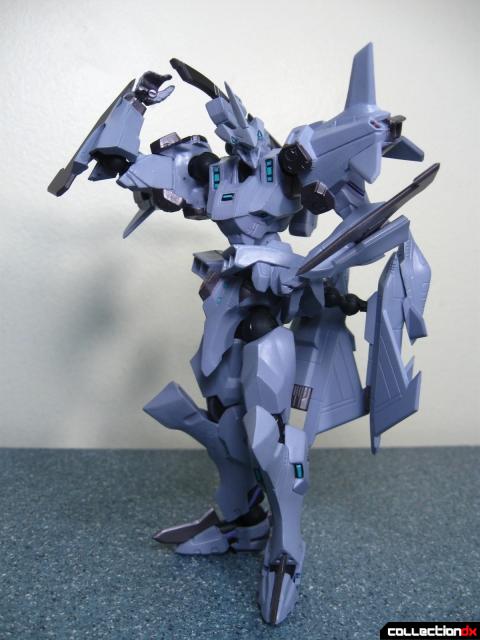 When the Typhoon needs a little extra reach for melee combat it can unsheathe its signature melee weapon from a custom mount pylon. 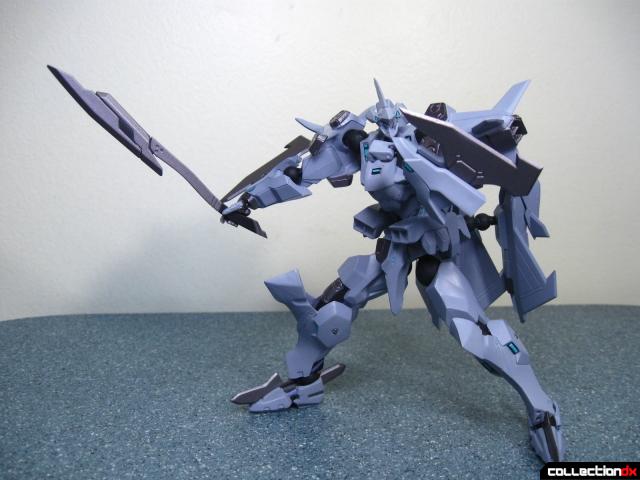 The Typhoon has its own sweet techy looking ax! This weapon is officially called the BWS-8 Flugelberte, which I think is some pretty mangled German but hey a Japanese series would never get another language wrong would they? The Typhoon's ax is an awesomely European touch for the re-imagined Eurofighter.

When combined with the blades on its arms and feet, this ax lets the Typhoon... 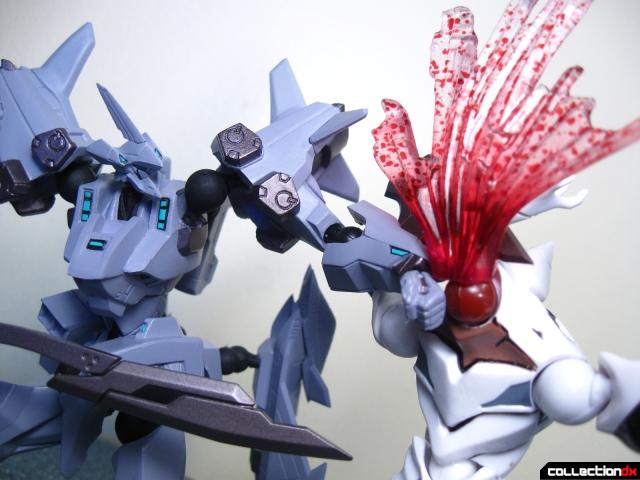 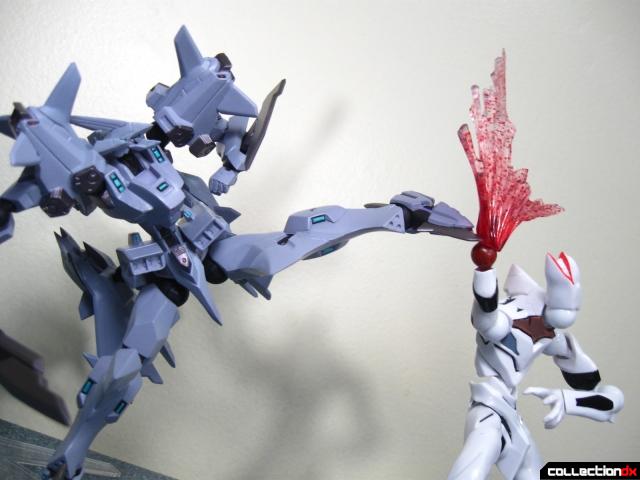 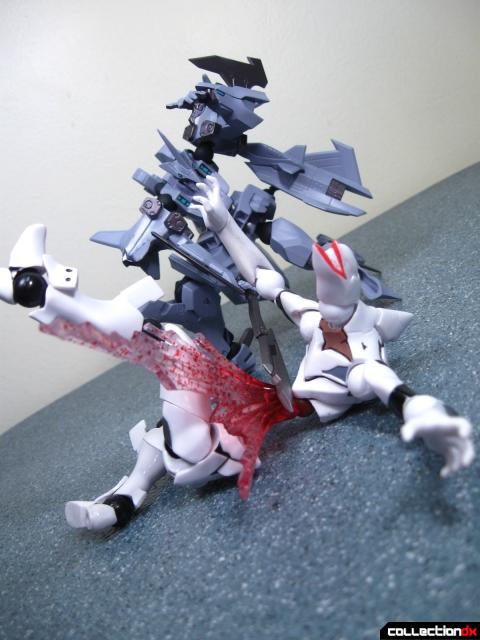 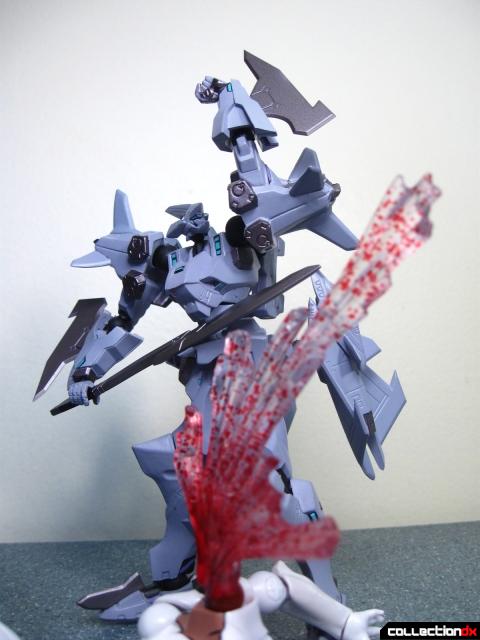 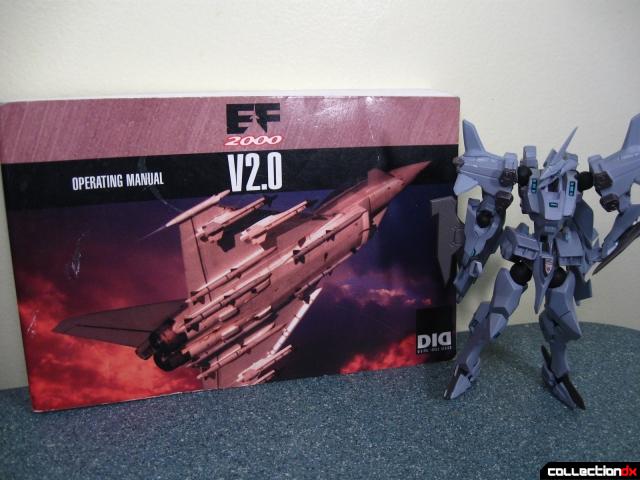 I have many fond memories playing the old EF2000 game on PC. As our illustrious CollectionDX Show hosts have noted, the heavy airplane influence to the robots of Muv-Luv makes me smile. 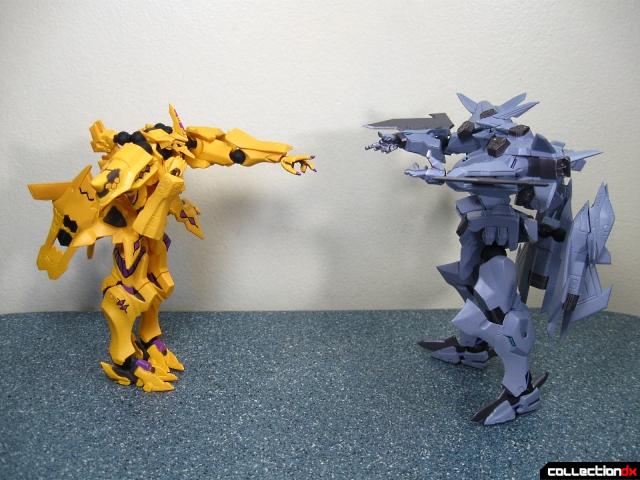 "Ah Fräulein! Come give your old friend a hug!"

A wise old Marine once looked at the EF-2000 and said, "I can see why they call it the Typhoon. Looks like he doesn't know where he's going and can cause a lot of damage!" Ms. Takemi can certainly attest to that.

And so ends another Muv-Luv Alternative Revoltech review. I regret not being into these toys when they were first coming out because they are some of the best action figures Kaiyodo has to offer. Being tied to what is primarily a visual novel series made them a little inapproachable to foreign audiences so it was hard to get attached to these designs without context. I'm glad I did take the plunge because these figures are now my go to group for just messing around with. The EF-2000 Typhoon is pure German chocolaty hand candy and its literally sharp styling makes it a unique figure among its peers. In addition to this all gray type there are also all white and all black variants with the former being a pack-in exclusive with a "The Euro Front" book. I prefer the gray variant but keep an eye out for the color you want if you're interested in this toy.