A little tid-bit about the Dr. Slump series according to wikipedia:
"Dr. Slump (Dr. スランプ Dokutā Suranpu) is a Japanese manga series written and illustrated by Akira Toriyama. It was serialized in Shueisha's anthology comic Weekly Shōnen Jump from 1980 to 1984 which were collected into 18 tankōbon volumes. The manga was adapted into an anime series by Toei Animation that ran from 1981 to 1986 consisting of 243 episodes and a remake series consisting of 74 episodes that ran from 1997 to 1999. The series helped launch Toriyama's career and was awarded the Shogakukan Manga Award for shōnen and shōjo manga in 1982"... "Dr. Slump is set in Penguin Village (ペンギン村 Pengin Mura), a place where humans co-exist with all sorts of anthropomorphic animals and other objects. In this village lives Senbei Norimaki, an inventor His nickname is "Dr. Slump". In the first issue, he builds what he hopes will be the world's most perfect little girl robot, named Arale Norimaki, in scenes obviously parodying the Italian children's classic The Adventures of Pinocchio. Because Senbei is a lousy inventor, she soon turns out to be in severe need of eyeglasses. She is also very naïve, and in later issues she has adventures such as bringing a huge bear home, having mistaken it for a pet. To Senbei's credit, she does have super-strength. In general, the manga focuses on Arale's misunderstandings of humanity and Senbei's inventions, rivalries, and romantic misadventures. In the middle of the series, a continuously-appearing villain shows up, based on Toriyama's editor at the time.

Dr. Slump is filled with puns and bathroom jokes, and parodies of both Japanese and American culture. For example, one of the recurring characters is "Suppaman", a short, fat, pompous buffoon who changes into a Superman-like costume by eating a sour-tasting ("suppai" in Japanese) umeboshi. Unlike Superman, Suppaman cannot fly well, and instead pretends to fly by lying belly down on a skateboard and scooting through the streets. Also, a policeman in Dr. Slump can be seen wearing a Star Wars-style stormtrooper helmet, just as in the American movies. Toriyama himself has been portrayed as a bird (the "tori" in his last name means "bird", hence the name of his production studio Bird Studio), although Toriyama actually based the design of Senbei on himself (as a number of American comic strip artists have been known to do). In addition, other real people made appearances as well, such as Toriyama's bosses (like Torishima), assistants, and wife, Toriyama's colleague friends (like Masakazu Katsura), and others." As you can see, it's a silly show.

Surprisingly, Toriyama is labeled as an EX Gokin. A line previously reserved for spaceships and evil-looking gigantic robots with even bigger wings and weapons. He is one of two Dr. Slump EX Gokin releases thus far. The other being Arale Chan. He comes in a cute little blue box with graphics from the show/manga. The figure itself comes nestled in a plastic tray. The entire presentation has an ES Gokin feel to it. 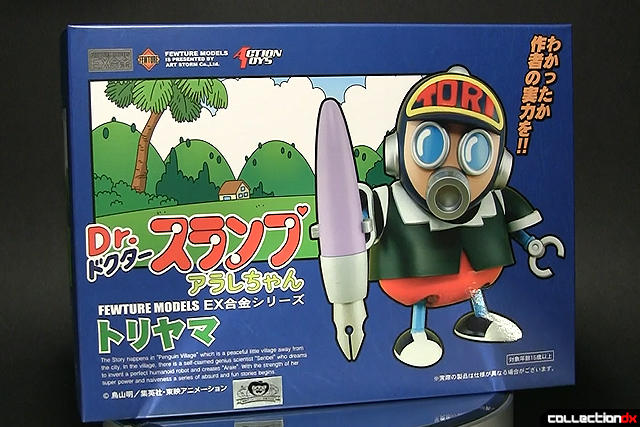 Out of the box, he is a relatively small and roundish retro-looking robot. He has a nice solid feel due to his diecast content which is primarily located on the lower half of his body. The rest is a PVC material. 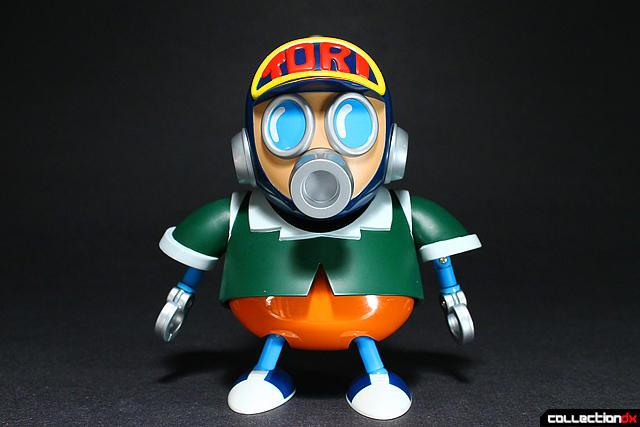 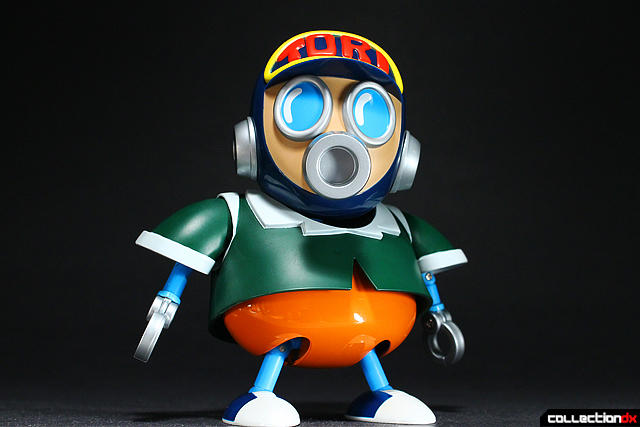 Out back you can see he has an old school tin toy wind-up mechanism. I found this to be amusing since it totally fits the look, but what I found even more amusing is that there actually is a mechanism built in! Unfortunately, it's only a gimmick as it does not make him walk or do flips. 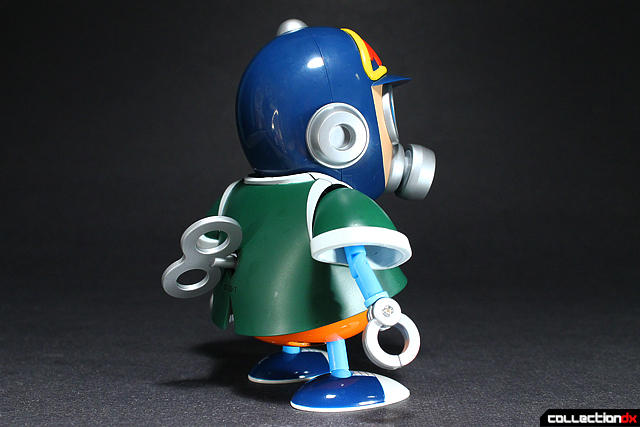 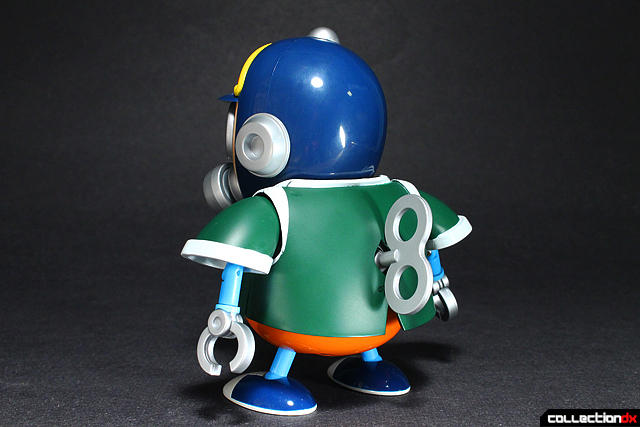 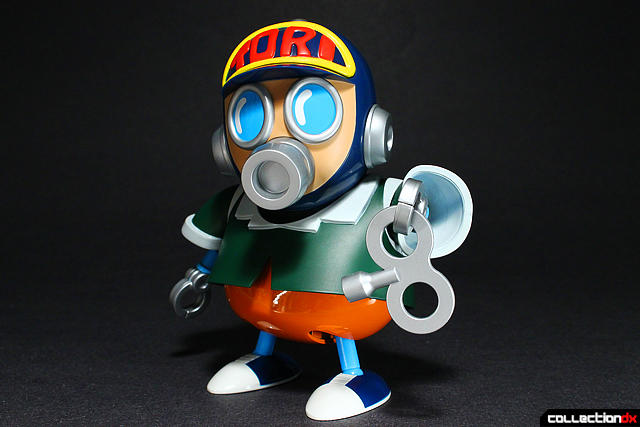 I like how well balanced the figure is. The joints are nice and tight allowing some fun posing. 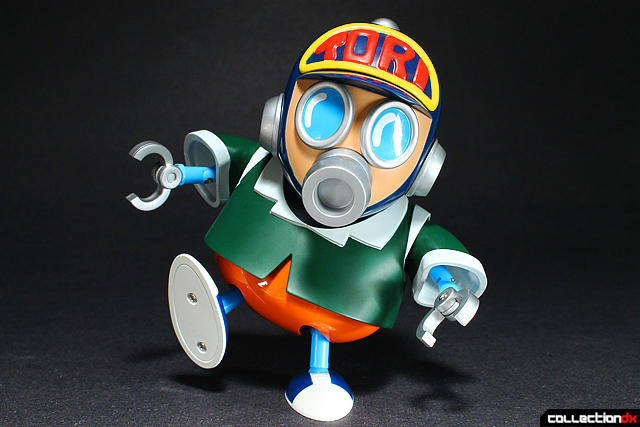 Since there is no such thing as having too many pictures on this site with robots bending over to show their under-bits, here you go. That entire orange rump is a great piece of diecast with a highly polished paint application. If you stare at it long enough, you can almost see a face. If you stare at it and get excited, then you need help. 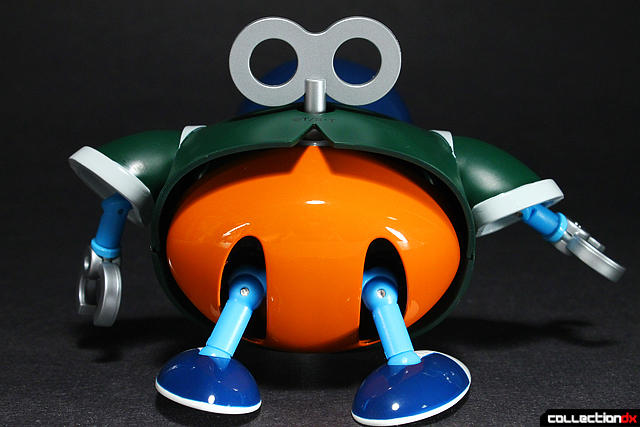 His accessories are limited to a basic stand and a pink G-Pen should he feel like inking some Manga. The tip of the pen is good old chrome plated metal. Use of the pen requires an alternate claw hand that better fits the large diameter of the pen. 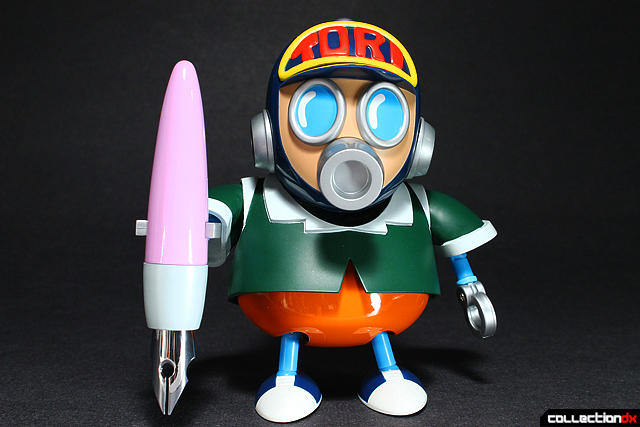 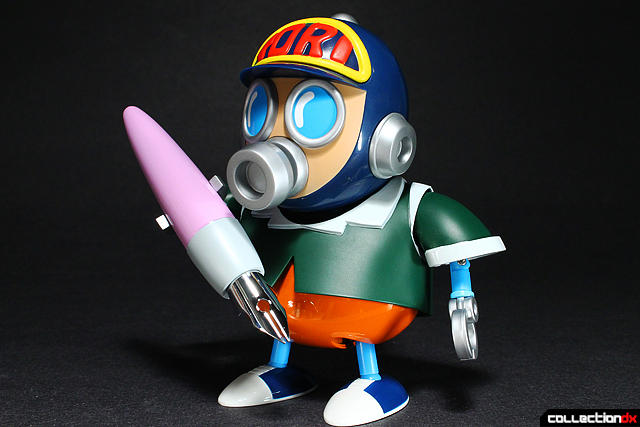 You have to love sharp metal accessories. 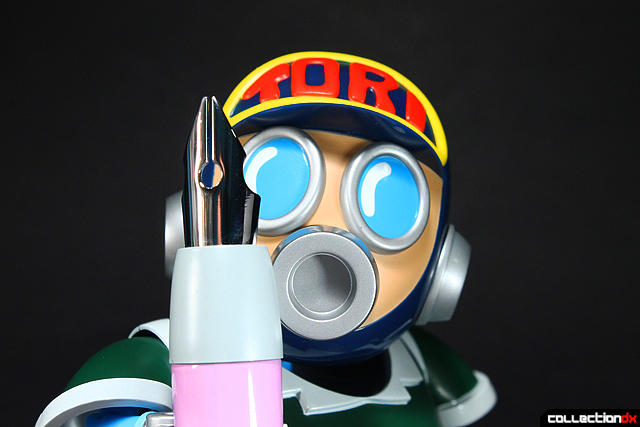 Pheyden was a little nervous during this size comparison shot... 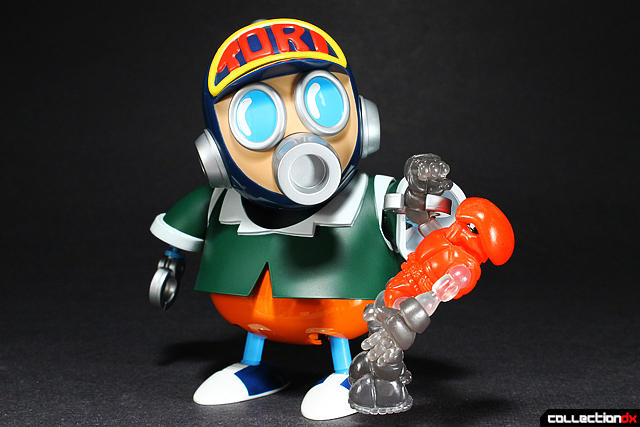 ...and with good reason. 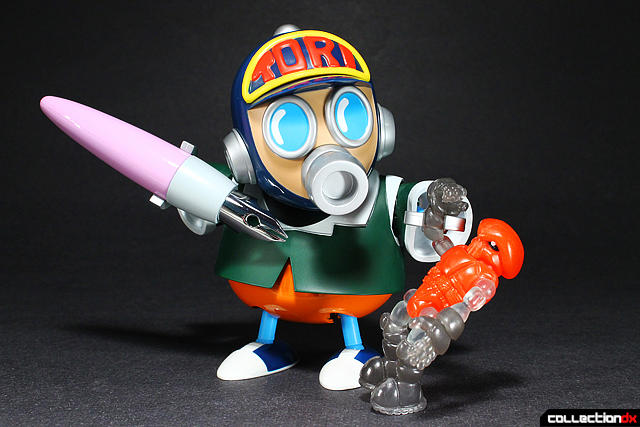 Although not as huge as his Getter and Mazinger brethren, he holds his own as a cute little high-end diecast robot piece. His expressionless face somehow emits tons of charm. Is he thinking happy thoughts? Or is he plotting his next pen-stabbing victim? Only little Toriyama knows.

Cute release, but it's weird that he doesn't have any cigarettes. Toriyama draws himself wearing a gas mask, as he is a really heavy smoker. Or, at least, he used to be. No idea if that's still the case.

Nice toy! I doubt Toriyama ever thought he would have a toy of himself heheh

It's also good to not see anything related to QC problems :)

Did you get Arale also? Her EX Gohkin release seems a lot nicer than the CMs release.

Yeah, I got Arale also and I can bet it's worlds better than the CM's version.

Be cool to see a pen duel with this guy and sketchbot.