This figure was provided by the fine folks at HobbyLink Japan.

GUNxSWORD takes place in the futuristic-Wild West world known as the “Planet of Endless Illusion”. On this planet, a select group of individuals posses giant mecha, known as Armor. Dann of Thursday is the Armor of Van, the protagonist of the series. Van is a stoic, somewhat goofy individual who is in search of the man who killed his bride. During his journeys, Van crosses paths with many unsavory individuals, some of whom are fellow Armor pilots. When the time comes to duke it out using giant robots, Van summons Dann from a satellite in space, where it is stored in the form of the giant sword.

The box  for this figure is the window type packaging of the Robot Spirits line. 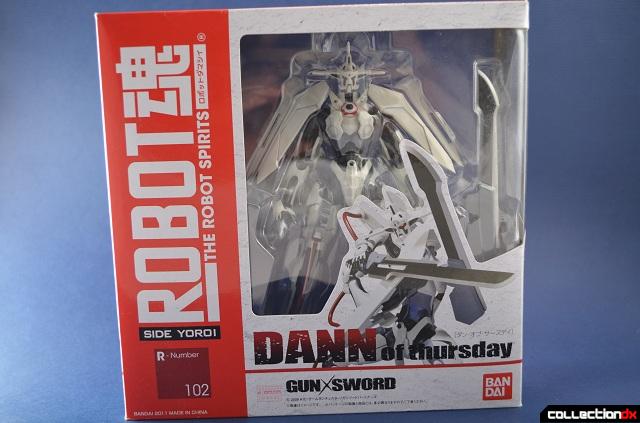 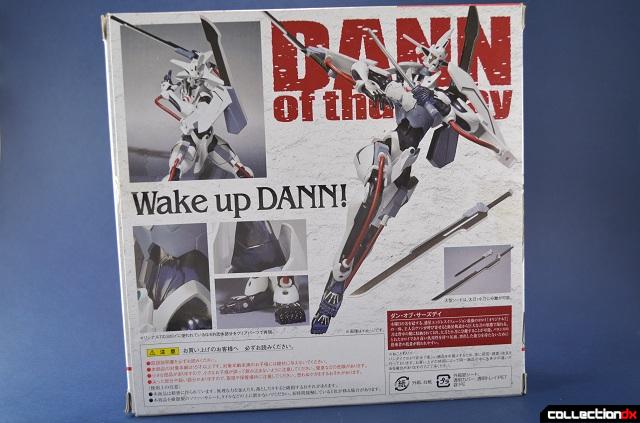 There are a couple of neat little hidden nods to the series on the package. The top of the box has circular holes, which mimic the holes that appear on Van’s sword whenever he summons Dann of Thursday. 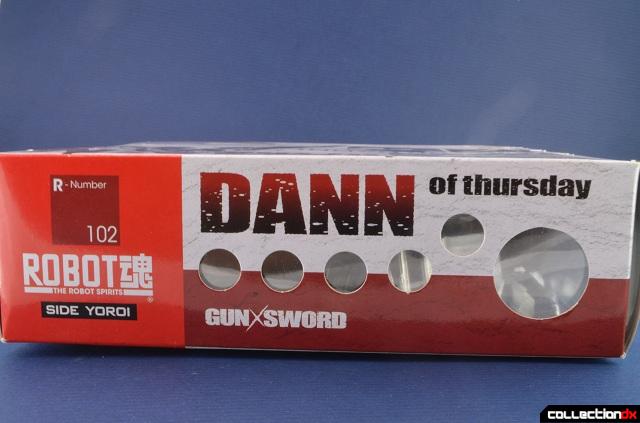 There is also a surprise when you open te box: the tab of the box has the catchphrase used during previews at the end of each episode. 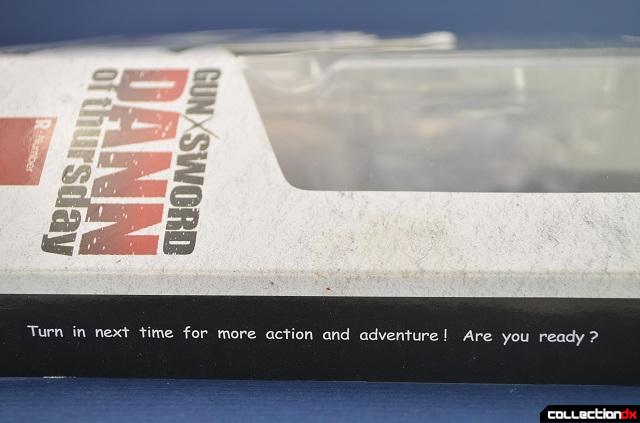 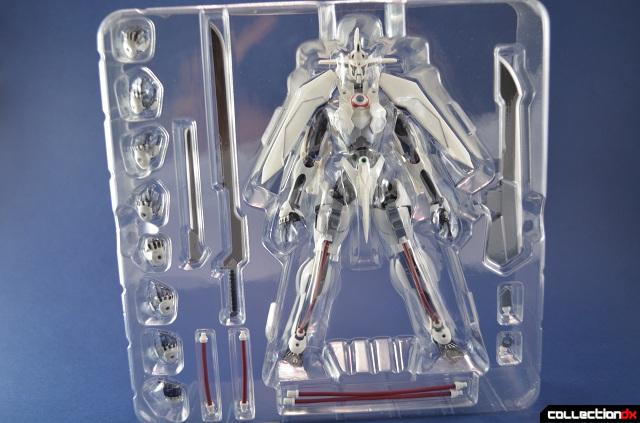 There is a slight amount of assembly to be done with Dann, since a couple of the parts come packaged seperately from the figure. The tubes need to be attached between the forearm and the armor that extends from the biceps; the blade LAO needs to be attached to the back of Dann.

The roster of mecha in GUNxSWORD is pretty eclectic. From Volkein to Eldorado Five, GUNxSWORD runs the gamut on mecha designs. Dann of Thursday is another unique design from the series. I find it to be a little too busy, however, with lines going out in just about every derection. It is hard to find a point of focus on the figure. 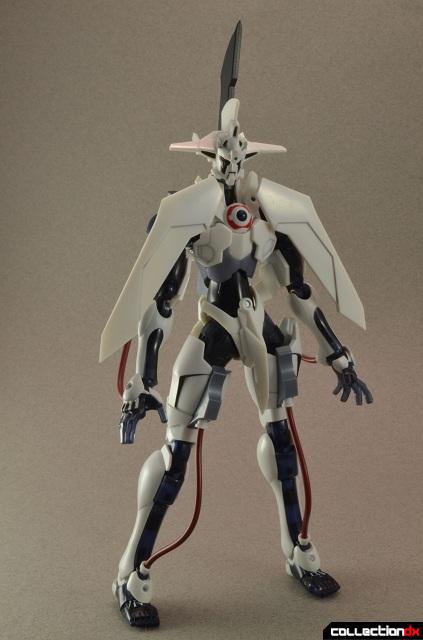 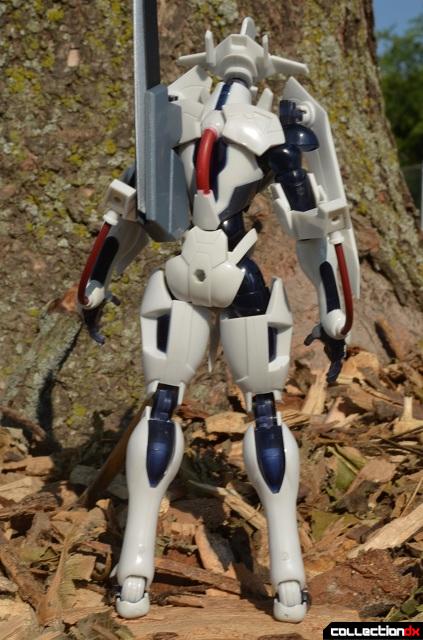 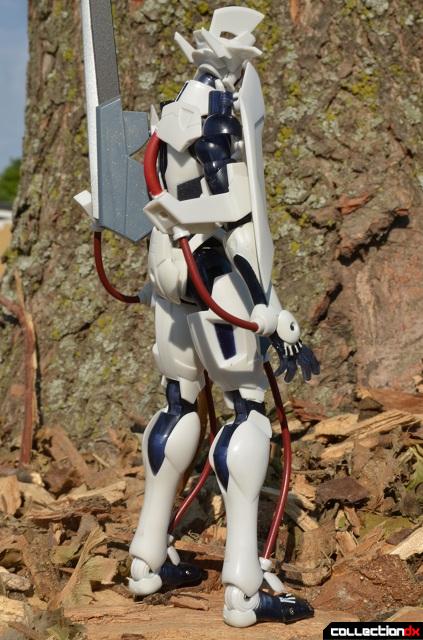 The big blade that is attached to the back of Dann is not just there for looks. It can also spin at a high rate and allow Dann to hover. 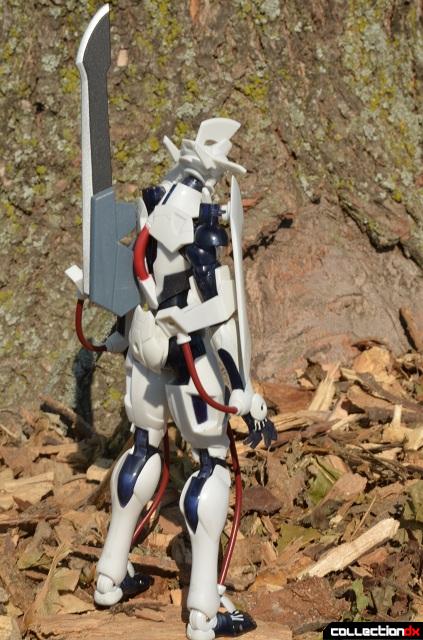 The cables on its arms and legs and its human feet give Dann the look of an organic robot, which could explain Dann’s healing abilities.

I really dug the clear blue plastic pieces that appear on several parts of the robot including: the feet, legs, thighs, and hands. They add a little uniqueness to the figure when you look at it up closes. In the show these are parts of Dann that glow when it is transforming from sword to robot form. 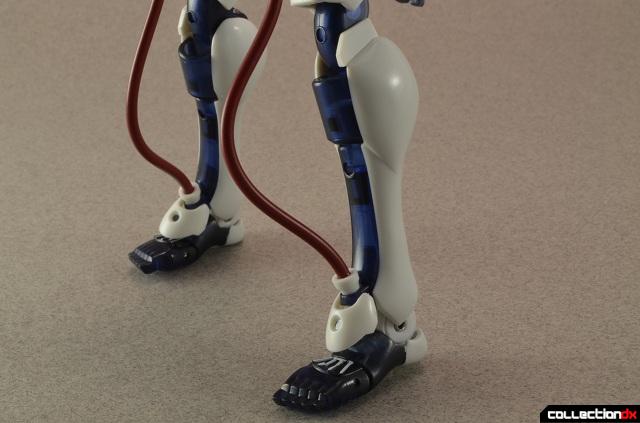 The panel lines on the front of Dann are painted in a light grey.  They were not painted equally on both sides. The ones on the right side are much more pronounced than the left. 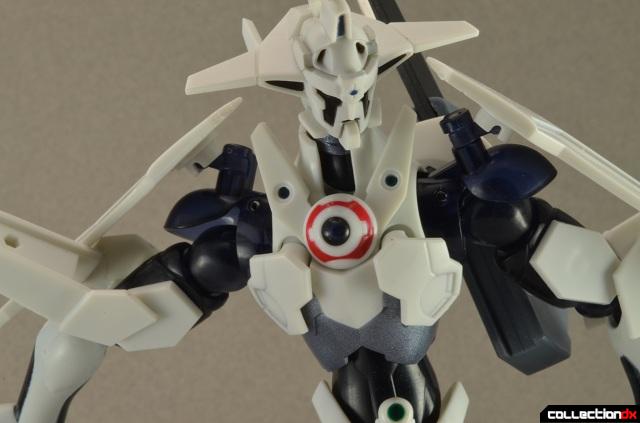 The panel lines on the back are also completely unpainted. This really hurts the look of Dann, because its predominantly white paint scheme could have used painted panel lines to make it look more like it did in the anime.

This figure has a ton of articulation. You have a lot of the Bandai staples: bicep swivels, double joint knees, ball joints in hands, head, and thighs, etc. 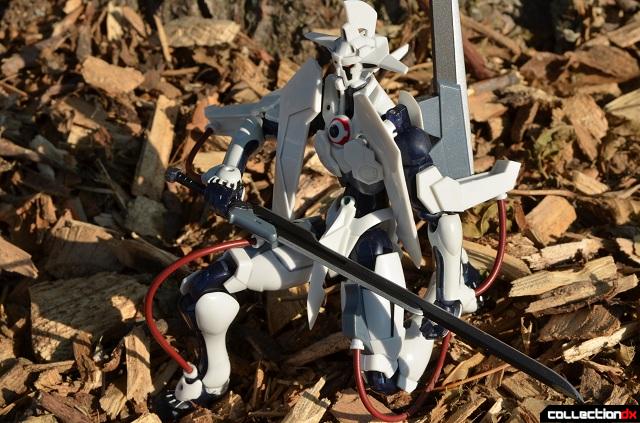 It can pull off a kneeling pose without breaking a sweat (although it does require attaching longer cables to the legs so that they can bend). 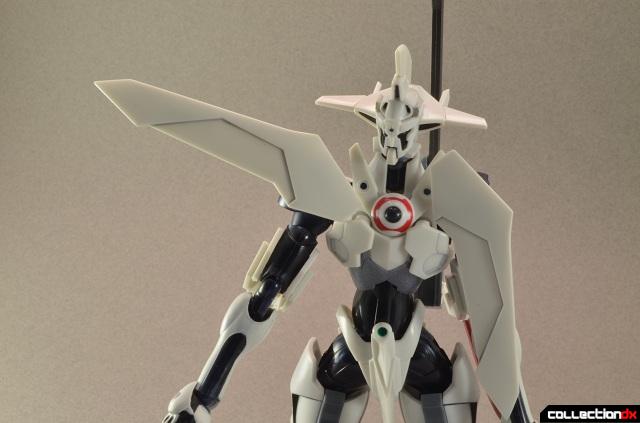 The large panels that are over his arms move, which is great because they free up Dann's arms to move in all directions.

Though Dann's midsection cannot move back more than will allow him to stand erect, his slim abs allow him to move forward enough to bow. 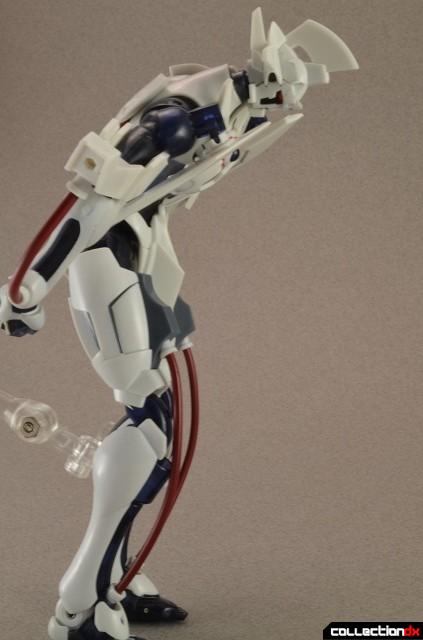 The top-heavy design of Dann and odd surfaces for the feet, however, mean that Dann is not the most stable figure.

The panels on the back and front of Dann can also be rotated. 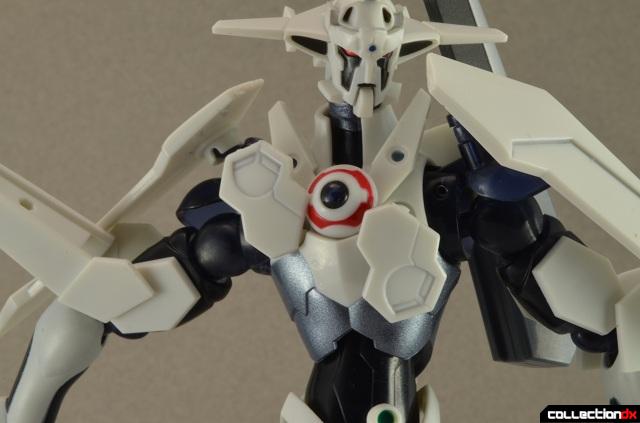 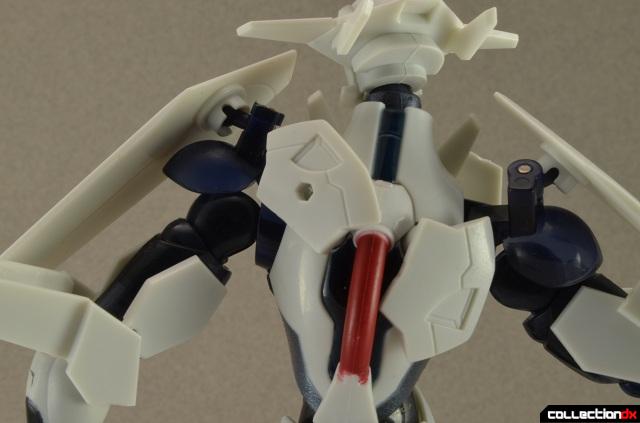 The feet covers can move up to allow the feet some extra breathing room. 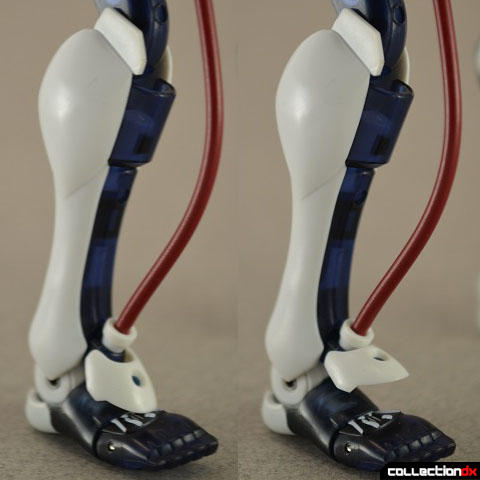 This totals up to way over 30 points of articulation!

Dann, being a weird mish-mash of various robot types, ends up looking  a bit goofy looking  like his  pilot. What Dann lacks in looks, however, it makes up for in fighting ability. 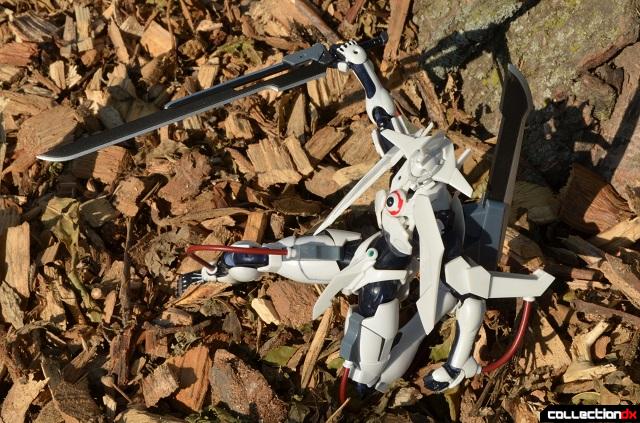 Dann is an Armor that specializes in melee combat. It  is equipped with a giant sword that can separate into two smaller weapons. 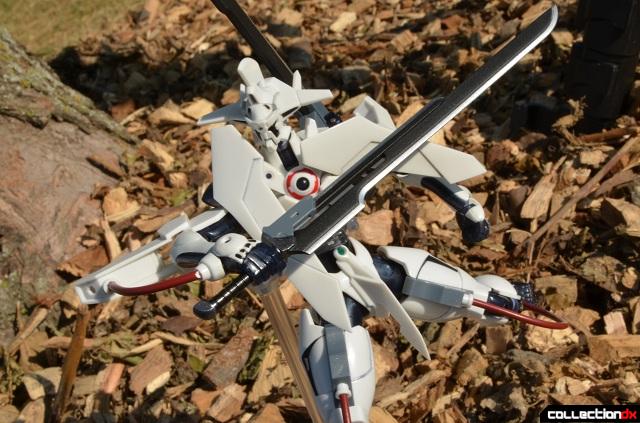 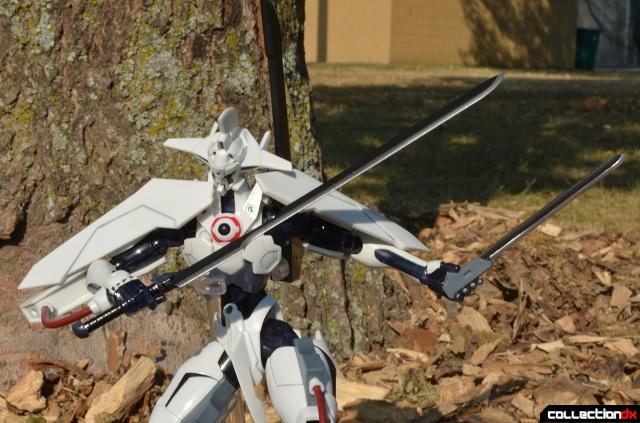 The swords can also be attached to hardpoint holes on the armor that is attached to the biceps. 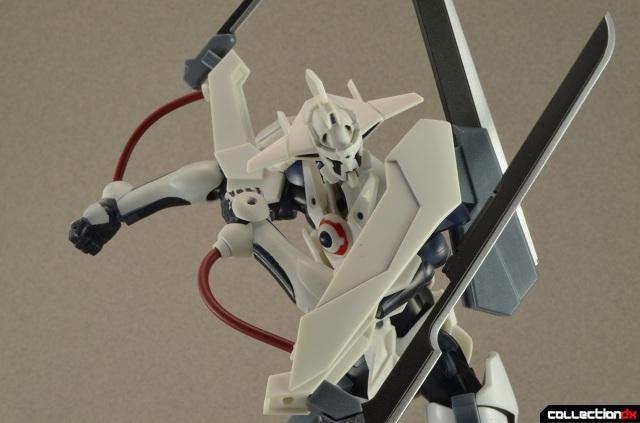 Besides his close combat fighting abilities, Dann also has the power to cure anything that ails Van, including hangovers. Unfortunately Bandai could not recreate this ablity, which could prove to be quite useful.

This is a decent take on the character Dann of Thursday. It has a great deal of articulation, but I would have easily swapped some of the figure's not-so-functional articulation, like the ability to move the front and rear chest panels, for a better paint job. Bandai's decision to not color in all the panel lines on this Robot Spirits figure keeps it from achieving a higher level of anime accuracy. 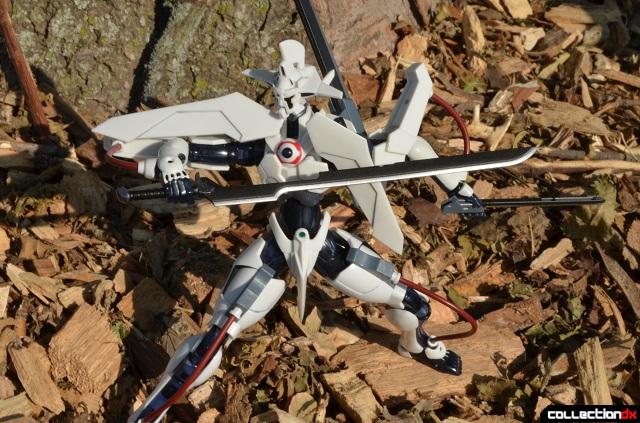 Are you going to hit Dann up with a Gundam marker like you did with the Unicorn Gundam? After seeing the pics I see what you mean about him not really popping out. Compound that with your observation about lack of point of focus and I find that my eye is generally drawn to the extremities or the ends of his swords. Cool figure though, he kind of reminds me of the Ultimate version of Captain Marvel.

IT'S SO NICE OUTSIDE

GetterVolt. Huh. I see what you mean about the similarities between Dann and Captain Marvel.

I am not actually going to do the panel lines for Dann because A) Dann doesn't need it as badly as the Unicorn Gundam and B) I think my markers are running low on juice.

Veef- It is nice to get out. Especially since we just a string of over-100 degree days here in the Chicago area. Now that it is cooler , I can head up to the park and snap shots of the toys.

it is tiny and has most of this detail, but also changes into the dagger-like "ship" that descends from the sky when dann goes into battle. to accomplish this, the blade is huge and incredibly awkward, though sort of charming.

Holy moly! That is a huge blade! I always wondered how somebody would pull of Dann's transformation in toy form, since it seems to be one of those "anime magic" transformations in the show. I am definitely digging the sword form of the halfeye Dann. It looks like you could impale somebody with that thing.