Moving and living back in the area I grew up in, I am blessed with some great thrift and antique stores around where I currently live. Many have come and many have gone but there are some standards that just seem to go on forever. One store in particular used to be one of my favorites but over the years it seems they have a picker in the back who takes out all the great vintage items and sells them to snotty vintage dealers and clothing mills but every once in awhile they accidently put something out that blows my mind. For example at this particular store I found this 1983 GI Joe Pocket Patrol transport case for under a dollar. But Most of the time it is dry as desert. 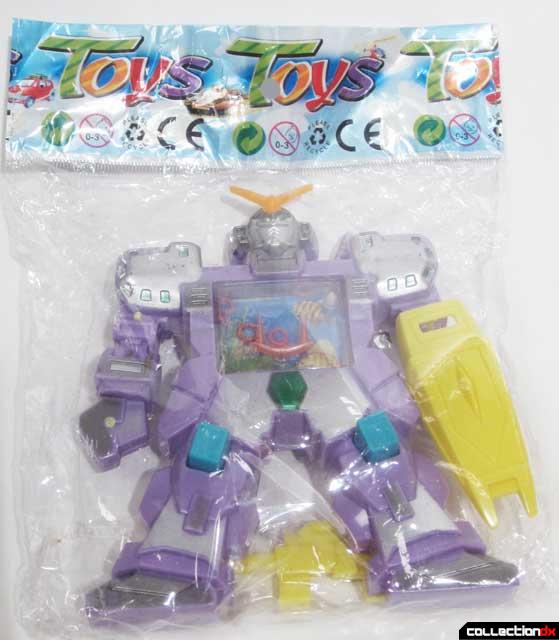 A few months ago I happened to come across an item that did blow my mind in a big nasty way only a bootleg Japanese toy could. If Gundam and Soundwave had a child after a night of drunken passion this could be the child’s crazy uncle. 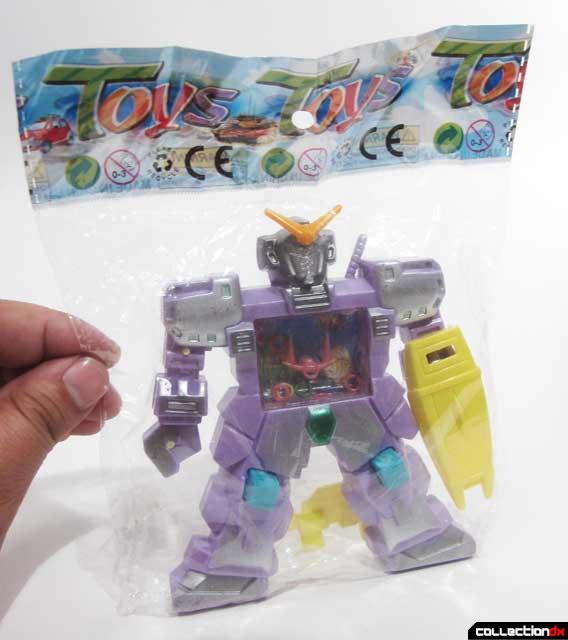 Where do you begin with this one? Looks like a smashed down RX-78 with a crazy window in the chest and colored like our favorite G1 Transformer troublemaker, Soundwave. It was not until closer inspection that I realized it was one of those cheap water games one used to sit for hours playing as a kid, vainly attempting to get those rings on the poles. Incredible. 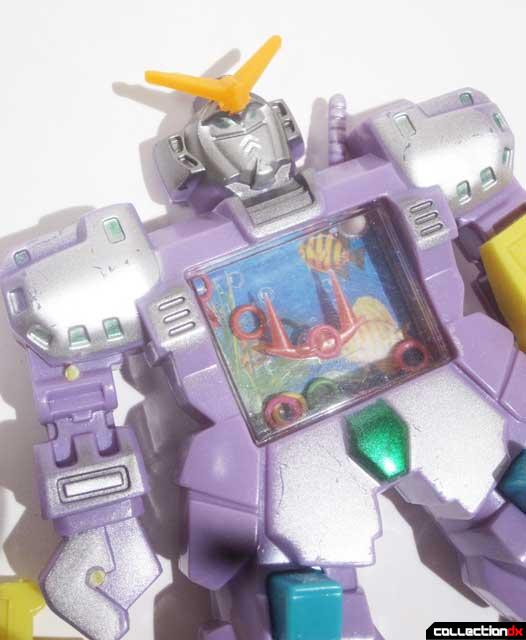 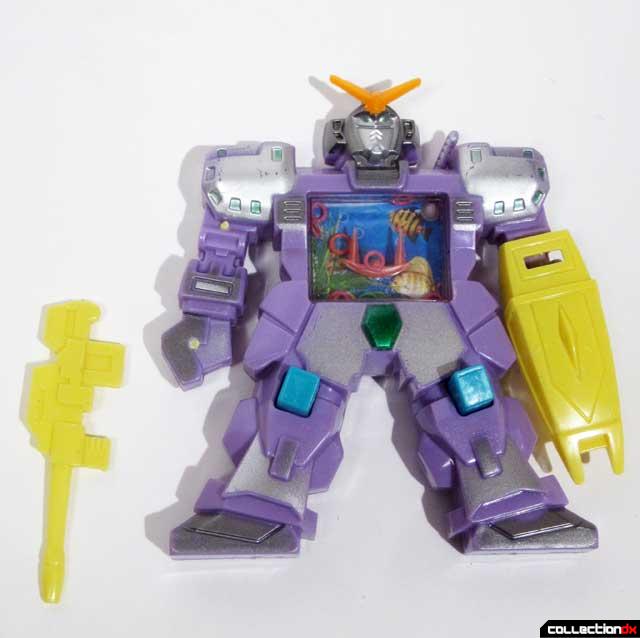 Let us look at the details on this one. First, you can see it comes with a shield and laser rifle. If you notice the laser rifle handle does not go in the hand but two pegs fit into the top of the arm which makes the gun looks kind of awkward. Of course the gun was broken off right out of the package, as it would not carry the spirit of a true bootleg unless it is broken right out of the package. You can also see there are two buttons on the leg to compress air into the water chamber. That alone is guaranteed hours of Gundam fun. 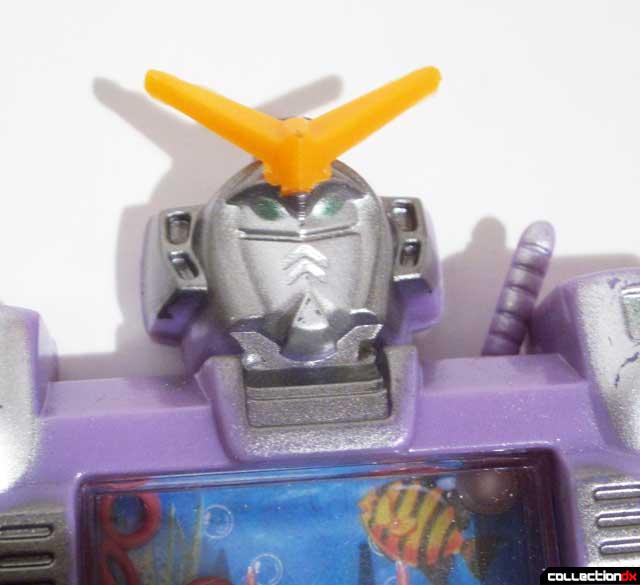 The close-up of his face it looks like he is a little bit perturbed with some fury in his eyes, maybe perhaps because this mighty warrior has been reduced to a throw away Summer toy, his battle is now just trying to stay out of the garbage bin. 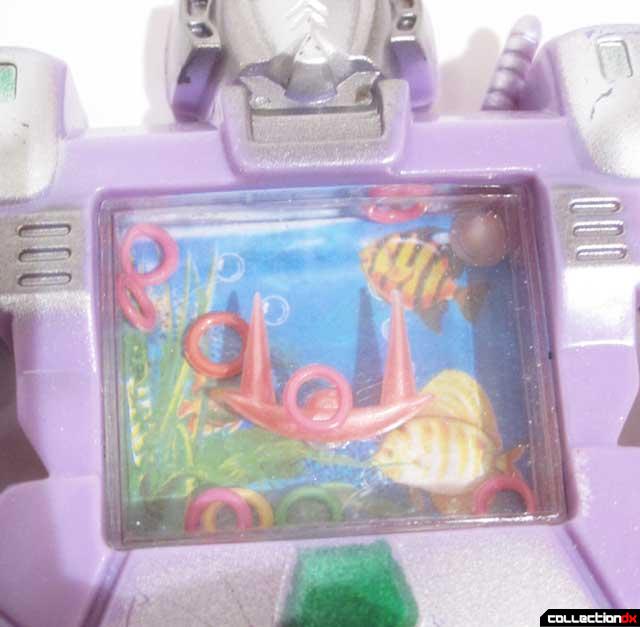 Where as Soundwave had incredible tape cassettes that transform into imaginative robots and birds in his clear chest, this Gundam has swimming tropical fish pictured in the background. One would figure they would at least put some sci-fi fish or futuristic undersea ships to go with the theme of the robot but the generic tropical fish seemed to make the final cut with this product team. Perhaps it is a cultural thing. 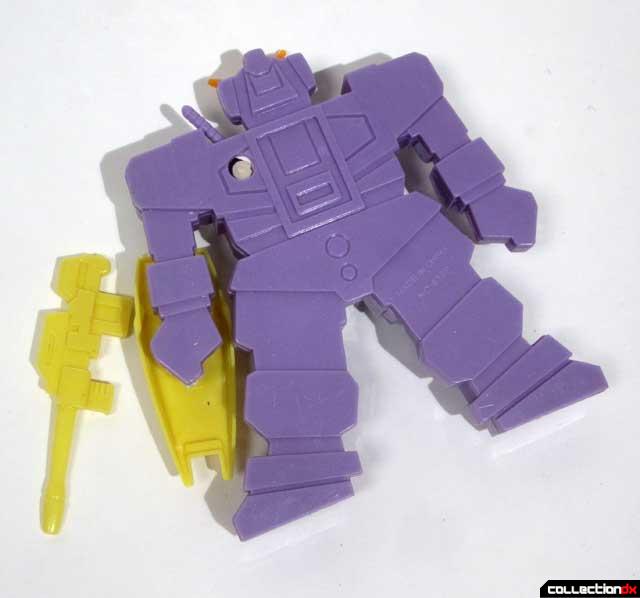 Turning the toy around you can see it has a flat back with a hole to fill the toy with water. Be thankful that it did not already have water in it out of the package. No idea what those circular impressions on the back are for. 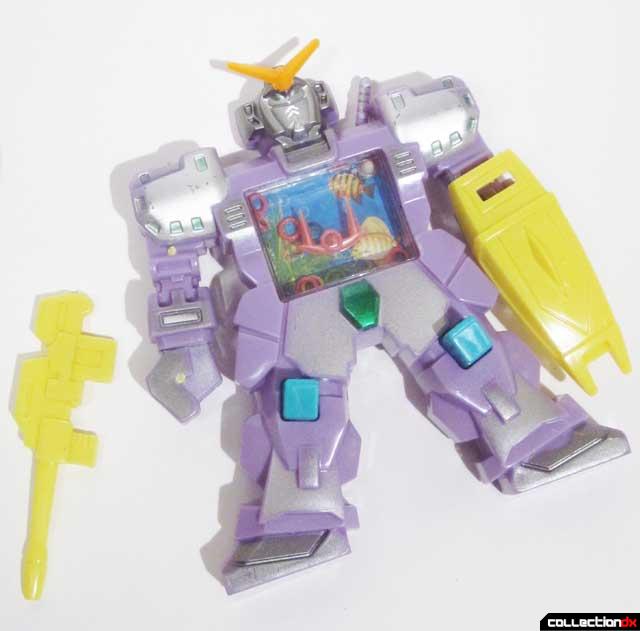 Wow, this one still makes me laugh, and to be honest I would have most likely loved it as kid as it is a Gundam although a trashy version of our favorite White Base robot. Most likely no one will ever see this one again so I am glad I was able to review this one for you and to let you know, in the existential words of JoshB, “It exists!”

A friend of mine recently told me that he had spotted an item matching this description, a Gundam with a water game in its belly, and picked me up one of each color!! I haven't seen it yet, as we have a big exchange of toys coming up, but this has got to be the same toy... it's all I'd dreamed and more.

Looking at the shoulders and the bottoms of the knees, I think it may actually be based on the Gundam Ver. Ka, Gundam Mk. II or GP01.

It's got some Gundam Mk II shins.

We need a video of you playing the game, Leo.

Very interesting piece. It would be funny if it had aquatic colors like blue, turquoise, or gray.

Glad everyone liked this review! It was a crazy toy that needed to be put in the spotlight!

Also welcome aboard Scarfang to CDX!!