The Alteisen from the Super Robot Wars OG games was one of the earliest robots released in Bandai’s Super Robot Chogokin line. The 2010 Chunky Red Robot is generally viewed as one of the finer releases in the SRC line, and perhaps the best toy version of the Alteisen released to date. Sporting wonderful articulation for its rather expansive frame, fantastic detailing and a few gimmicks to keep you coming back to fiddle with it, it delivers in every way you could possibly want from a 6” Chogokin. There is an excellent review by VF5SS posted here.

But, the Alteisen has a secret! It has a Twin Brother from the “Shadow Mirror Universe”. The Alteisen Nacht. Released by Bandai in 2011 as a Tamashii Web Exclusive. This seems to be one of the less well known of such exclusives as there is very little info on it out there. Just a handful of Bandai marketing images and a few videos of it being beat up by 16 bit anime schoolgirls.

The SRC is essentially a Dark Blue recolor of the Alteisen, with a few additional accessories. As the Alteisen has already been reviewed here I am not going to go into too many details on how the Nacht moves. It is in every way identical to the Alteisen, just Blue where the Alteisen is Red. 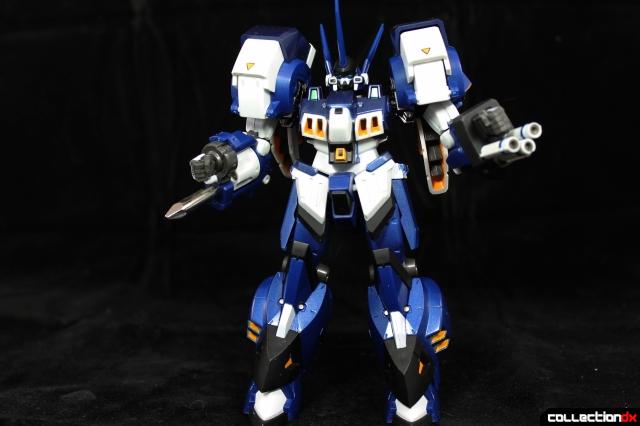 The packaging is pretty much as expected for a Tamashii Web Exclusive. A monochrome box. This time in a bluish grey. (This would normally have come in the standard Tamashii plain cardboard mailing sleeve. Mine came second hand and without the outer box. I collect figures for display and am not a stickler for mint packaging, so long as it protects the figure. The outer box when present looks like every other Tamashii outer box.) The front of the box shows the Alteisen Nacht at his best with his unique feature, his gorgeous Katana drawn while gripping his scabbard in his left hand. 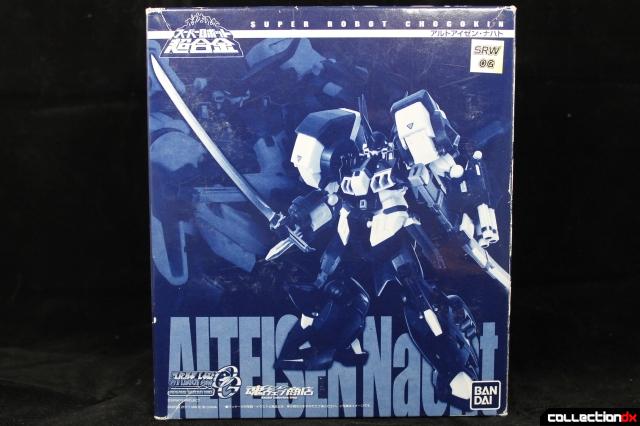 The back of the box similarly shows three nice monochrome blue’ish pictures of the robot in action, drawing his sword and using his Spike Punch attack. 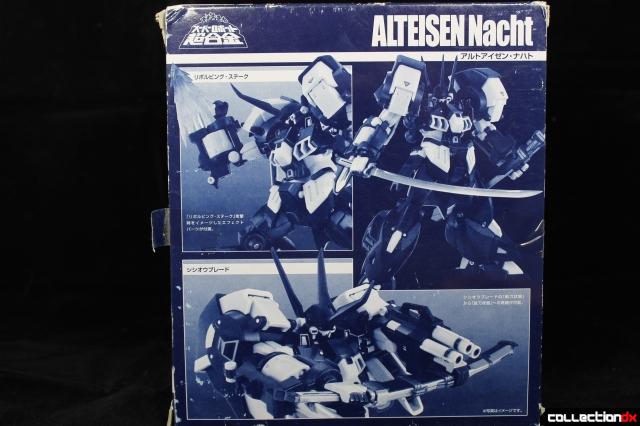 Inside you find the exact same tray as that found with Alteisen. The Nacht has includes all of the features and accessories found on the Alteisen. 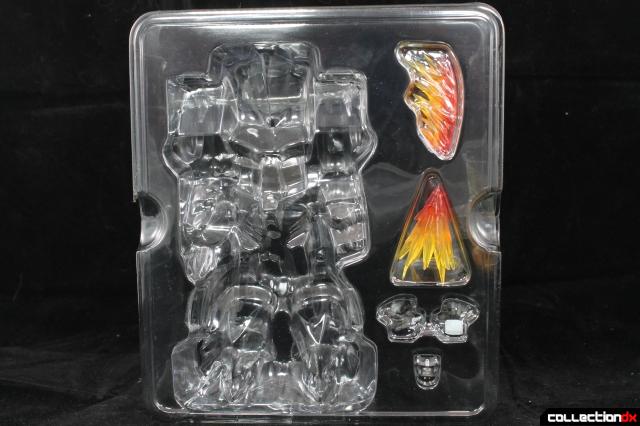 The main accessories include the blast effect part for the spike attack. A flaming horn attack part that slips over his “Rhino Horn”, a pair of open hands to swap with his default fists. And a Tamashii stand attachment that you are best served by simply leaving in the box and never speaking of again. No really this guy, is way too heavy. He will not be well supported by a thin plastic rob jabbed up betwixt his nethers, So I just leave him on the ground.

The robot itself is gorgeous. I think Alteisen Nacht with his sharp dark blue color scheme may actually look better than his better known brother. The blue really offsets the white and orange highlights. 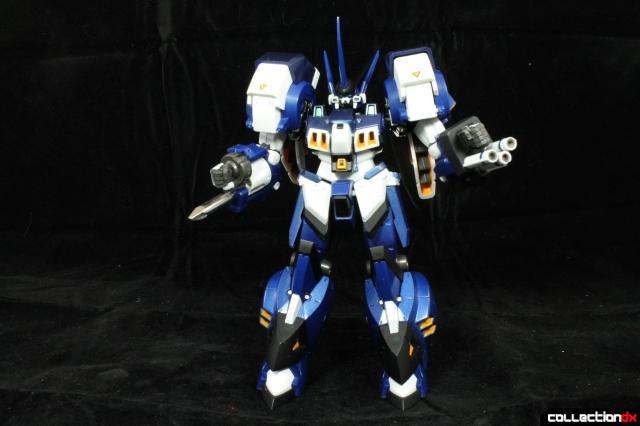 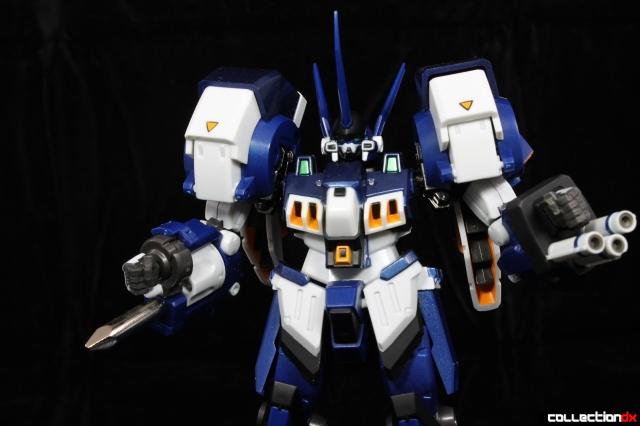 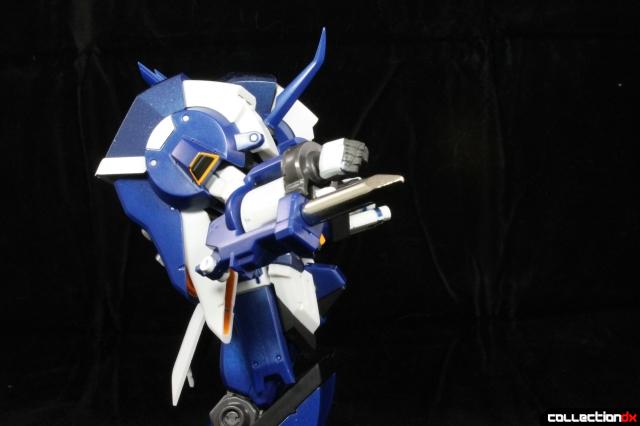 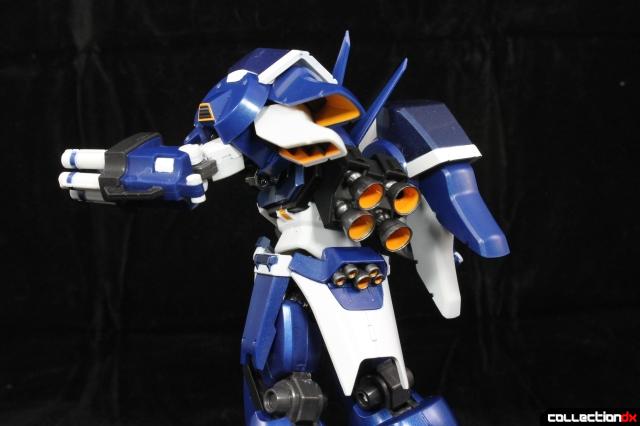 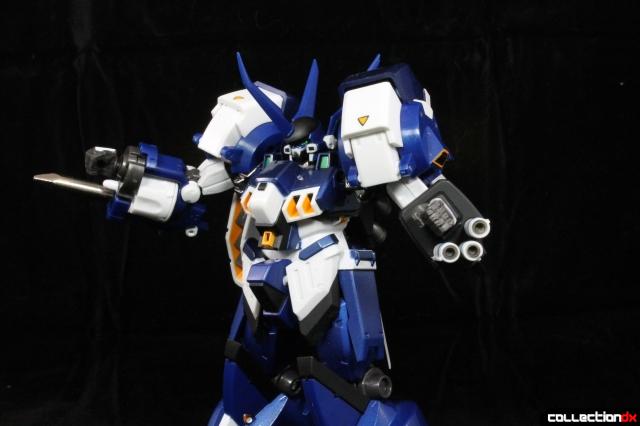 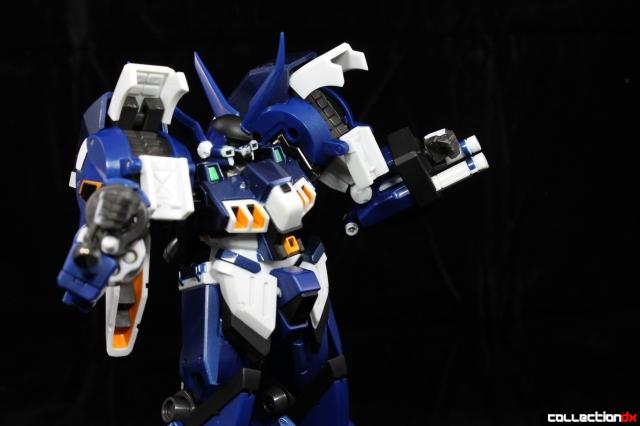 I’m not sure the effects parts look quite as good with the blue robot. I think the horn might look a bit better with a blue flame part? But it still looks quite acceptable. I’m a little unsure about the strategic reasoning behind the “Giant Robot Flaming Head Butt From Hell” attack, but hey “Japan”. 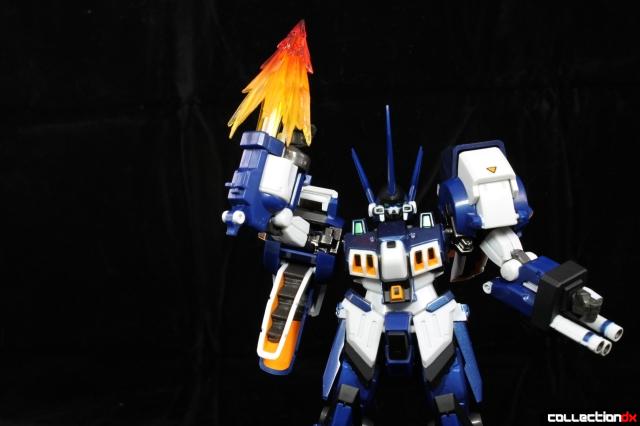 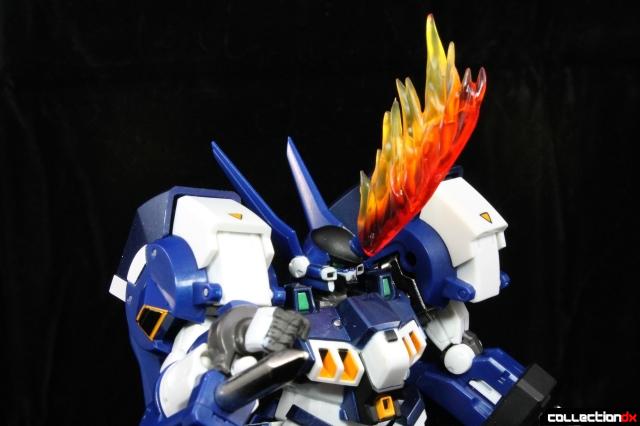 While I said I wasn’t going to go into the figures articulation, I do have to point one thing out. The feet on this sucker are fantastic. They extend. The toes and heels are jointed. The front armor is jointed. These feet are cool! 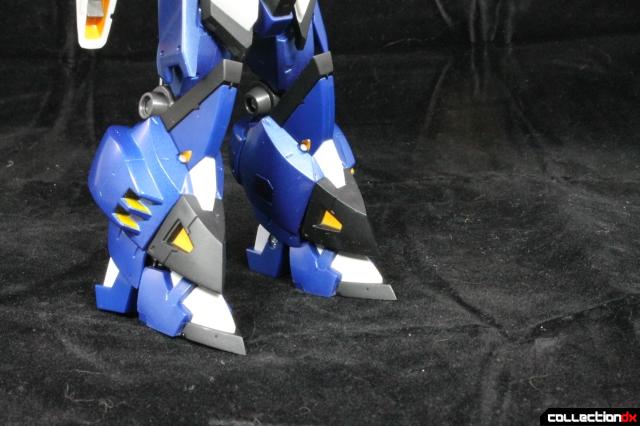 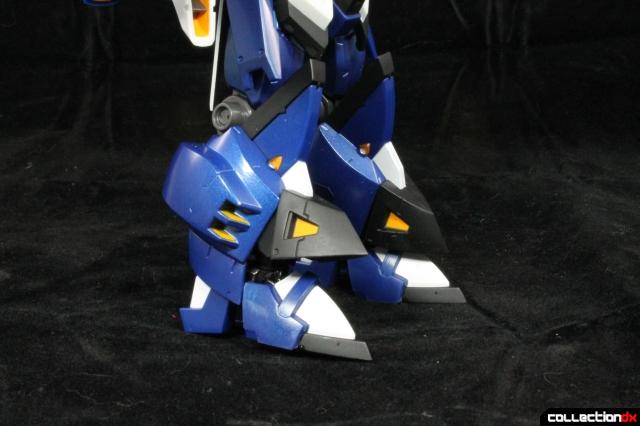 Now there is one bit of extra packaging in the box that is not included with the standard Red Alteisen. Unlike in later SRC’s repaint/retools they neglected to create a separate tray for the new parts and accessories. Instead they stuffed them in a plastic baggie and taped them to the bottom of the tray. 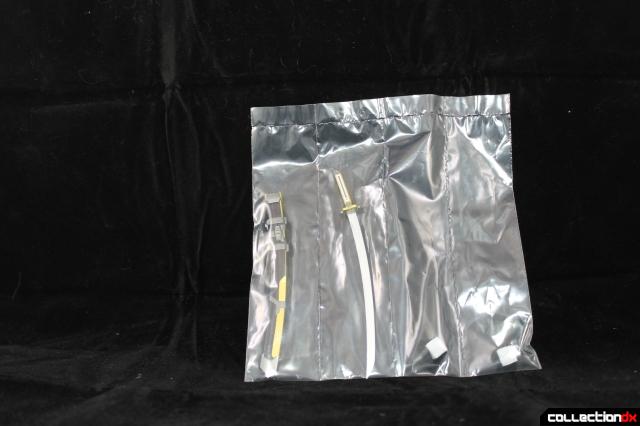 Inside you find an extra pair of holding hands and the glorious Samurai Sword and Scabbard. The sword is plastic (sadly) but is nicely detailed with some fantastic paint apps on the hilt. The scabbard is gorgeous. Being a nice mix of matte brown, gold and gunmetal. The sword does sheath nicely in the scabbard (which I forgot to take a picture of. Yay me!). One important detail, unlike the fists and open hands, the holding hands are not mirrored parts. The Right hand holds the Sword. The Left hand has a wider open grip to hold the Scabbard.

I should also note that the big spike on the Right Arm and the Mortar Cannons on the Left do somewhat limit the posing with the sword and scabbard. While you can get the arms to cross the chest enough to reach the swords hilt, because of the movement restrictions you can’t really get the left hand to grip it in any way that looks right or natural. At least not that I have yet found. 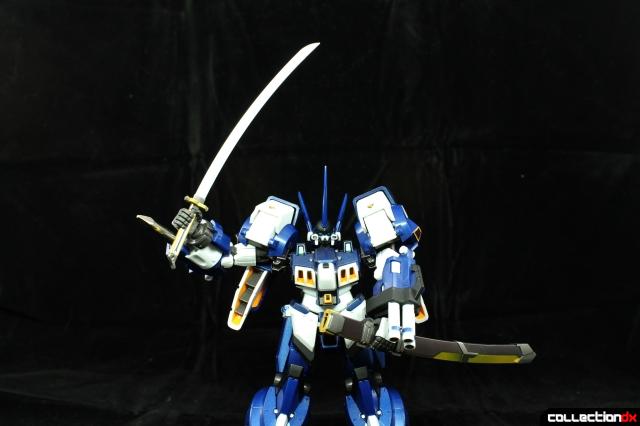 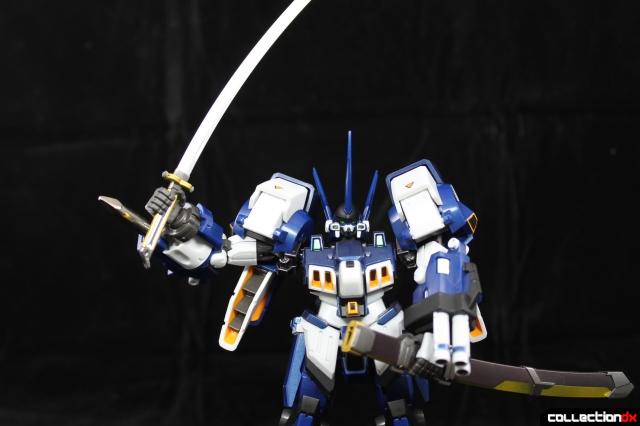 Here’s a little better look at the swords hilt 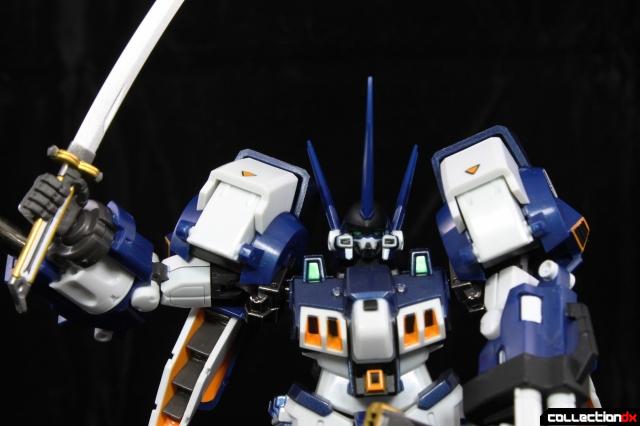 Overall the Alteisen Nacht is a fantastic figure. All the positives of the well made Alteisen plus a few extras. It may be a repaint, but it is a distinctive one that is a separate character within the games. The only minor quibble is in at least some versions of the game the Alteisen Nacht sports a 5 barreled Gatling Gun on its left wrist instead of the standard 3 mortars of the Red Alteisen. That would have been a nice on robot detail to differentiate the two.

While uncommon, the figure does show up periodically aftermarket, and normally seems to go for a surprisingly reasonable price for one of the older Tamashii Web Exclusives.