An interesting phenomenon in the Transformers toy line is technological progress and the changes in the brand's aesthetics have allowed for body types and transformation styles far beyond the old blocky G1 look. As a connoisseur of airplanes that turn into robots I accept that even if I wasn't into the live-action Transformers movies, I can appreciate how the shift in design philosophy has yielded more jet Transformers who aren't being outdone by decades old Gobots. 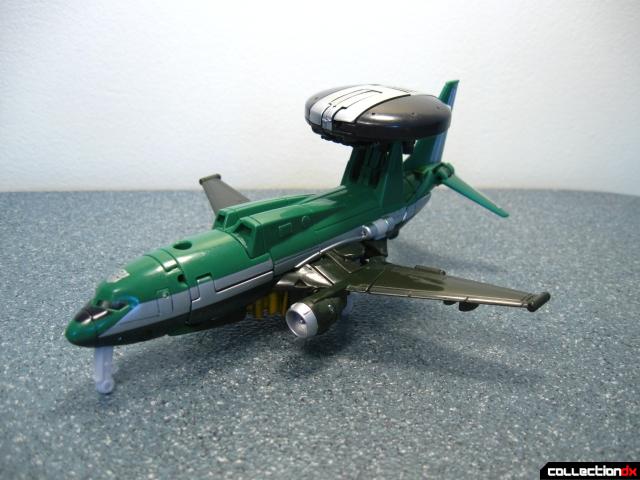 The subject of this review is Air Raid from the Dark of the Moon line. Much as the name "Air Raid" has been relegated to just about any filler Transformer with wings, this guy is one of the filler designs who did no appear in the movie. In fact this is the fourth Air Raid to appear in the movie based lines and he doesn't look a thing like the previous three. I picked up Air Raid at a Five Below where everything costs five dollars or below! If anyone out there needs some Green Lantern or Tron 2.0 figures they have plenty. The thing that unsettles me every time I go in there is the unending supply of Legends Class Gold Bumblebees... 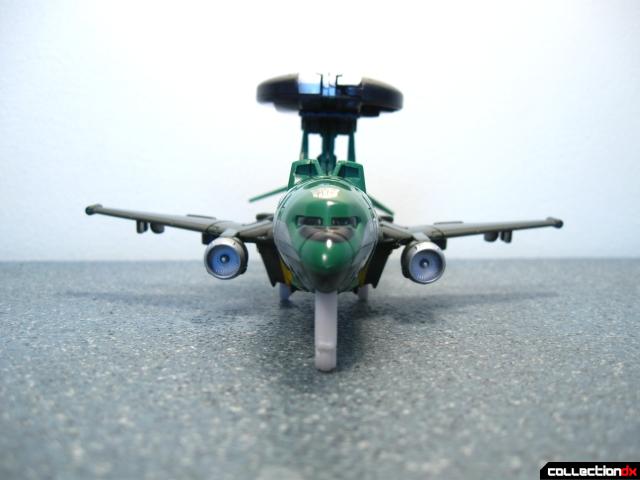 Air Raid is a Boeing 737 AEW&C which is in use by the Royal Australian Air Force, so in a cartoon he'd probably have a fake accent and would say "g'day!" a lot. Remember the G1 Minibot named Outback? Yeah just like that, mate! One way I think Air Raid succeeds where some other jet Transformers fail is he looks pretty authentic in jet mode. There are very few extraneous robot bits visible and everything on him locks together for a mostly seamless jet fuselage. His predominantly green and black color scheme isn't exactly ugly but it is a little odd. He looks more like a Fedex or UPS plane than a military jet. 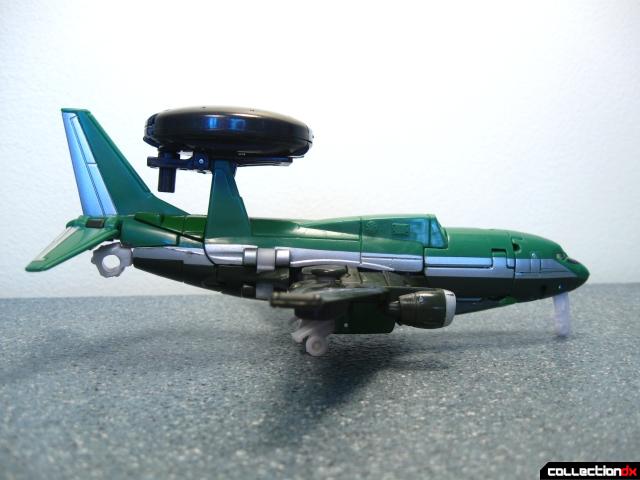 Again Air Raid looks quite good as an airplane. He rests on three non-rolling fold out landing gear. Please pay no attention to the robot fist coming out of the back of the tail. He's quite sensitive about it. 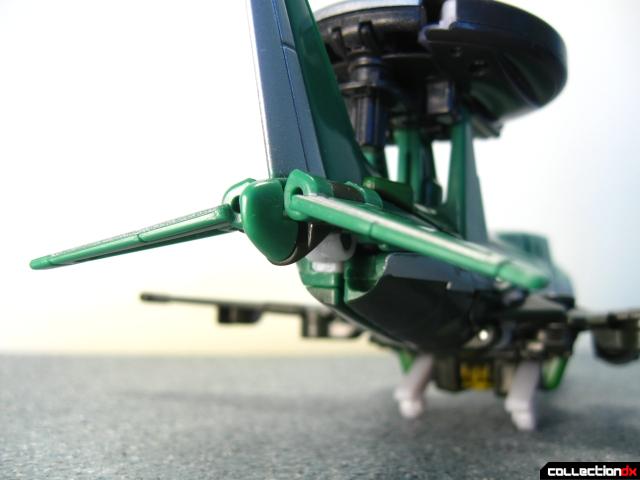 You can just pop the fist out of its wrist socket to make him look a million times better. I guess they had to mess up somewhere for this to be an genuine Transformers jet. I find you can jam that fist inside the radar dome weapon if you want to keep it on hand. 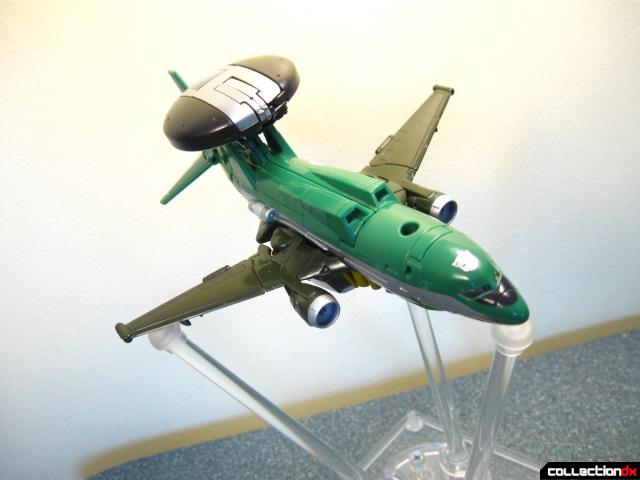 This is the type of airplane that uses its long range radar to watch over the skies and alert others of potential threats. The real 737 has a static radar "tube" apparatus whereas this toy emulates the more well known moving disk type setup. 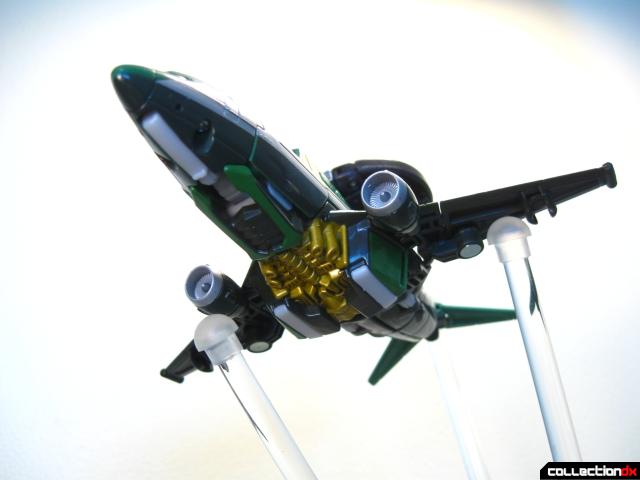 Only the underside betrays the robot mode as Air Raid's glistening gold chest is on display to whole world. If he was a larger toy I can imagine that part would collapse in a bit. Maybe it would be geared to unfurl with the rest of the transformation with some "automorph" gimmick. Focusing on the underside of an airplane may seem a little crazy but you have to remember this is how most people with encounter an airplane in their daily lives. Just look up when you hear it passing overhead and you've got the image of an airplane. 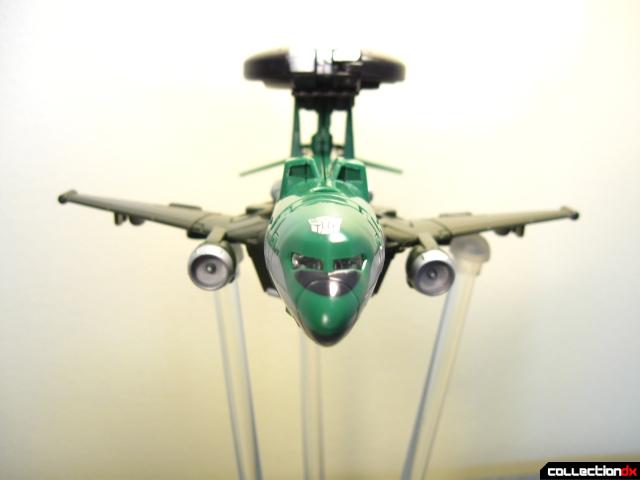 Do you get it? 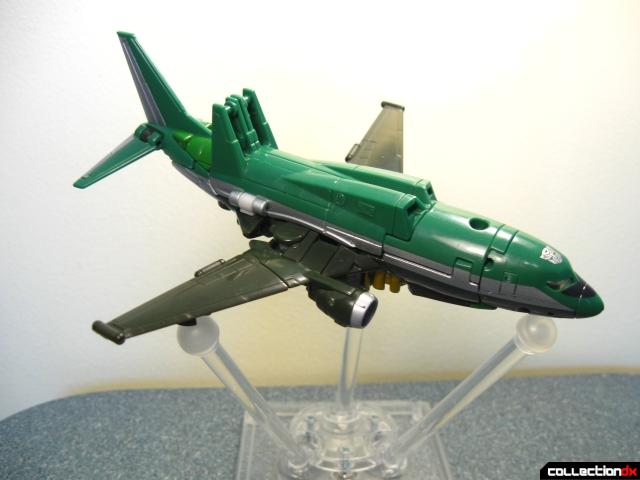 The radar disk become's Air Raid's weapon for robot mode so you have to pop it off before transforming him. Those remaining struts form his feet so there isn't much that can be done with them if you wanted a sleeker jet mode. 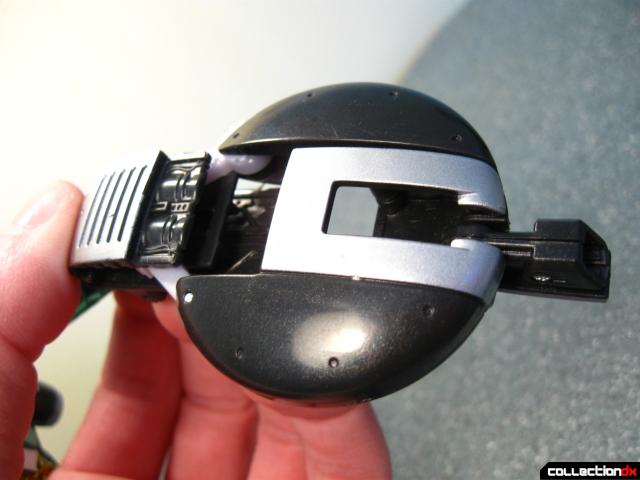 The radar also has a really terrible "Mechtech" gimmick where you push a panel on the back to make it deploy as a blaster-esque thing. It doesn't stay deployed when you let go of the weapon so it's kind of useless when posing Air Raid normally. It's not even shaped like a cool blade or morning star or something else that's cool. This is like attacking someone with a dustbuster. 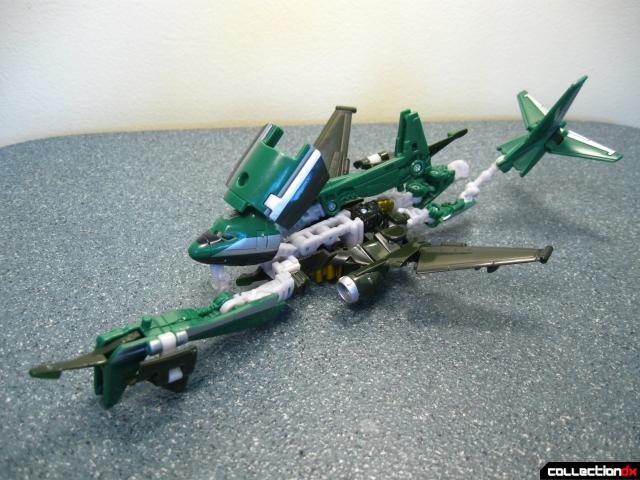 Air Raid's transformation is straightforward and surprisingly efficient. The designer took what is essentially a big metal tube with wings and worked out a novel way of changing it into a robot. It reminds me of that rare Machine Robo JAL airliner. There's a little bit of automorph where bringing up the front section of the plane makes Air Raid's head rise up out of his chest. 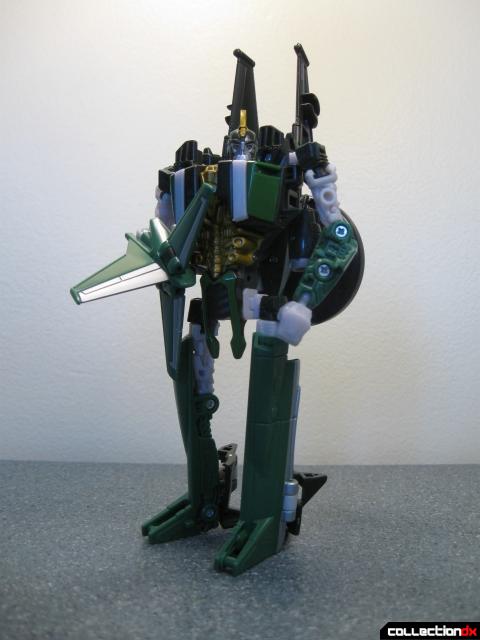 The final robot mode is a bit of a bean stalk with his long legs and gold n' green colors. Air Raid doesn't feel quite as substantial as other Transformers due to his use of small joints for his hips and arms. 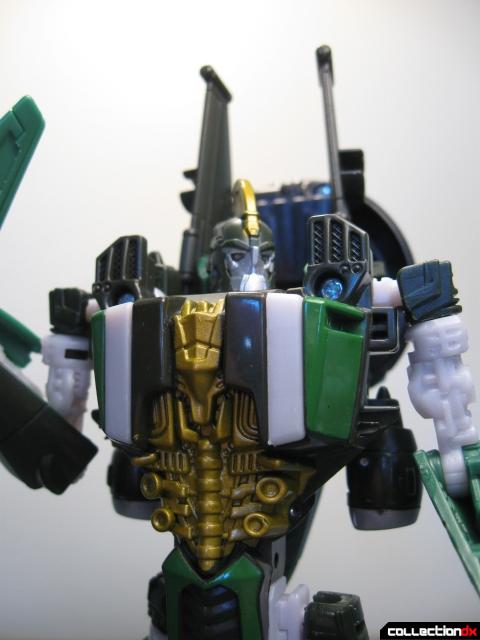 His overall stately appearance is topped off by a regal looking head. Due to his transformation Air Raid is mostly devoid of the typical Transformers movie style flourishes save for his wasteland of mech-abs. I think he'd look better without this halfhearted attempt at making Air Raid more movie-verse styled. However I do like the way his chest puffs out like a proud bird. The way his wings stick out above his shoulders is a nice touch and reminds me of a previous movie line jet Transformer called Stratosphere. 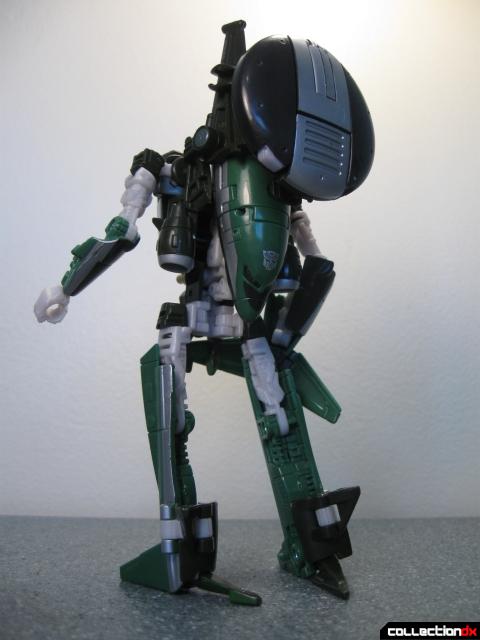 From the rear you can see a big chunk of the jet serves as a plane posterior. I actually like this effect as it demonstrates how Air Raid's robot mode makes good use of every part of the plane. You can peg the radar disk into a hole near the plane's cockpit. Even with a lot of weight above his waist, Air Raid stands tall. 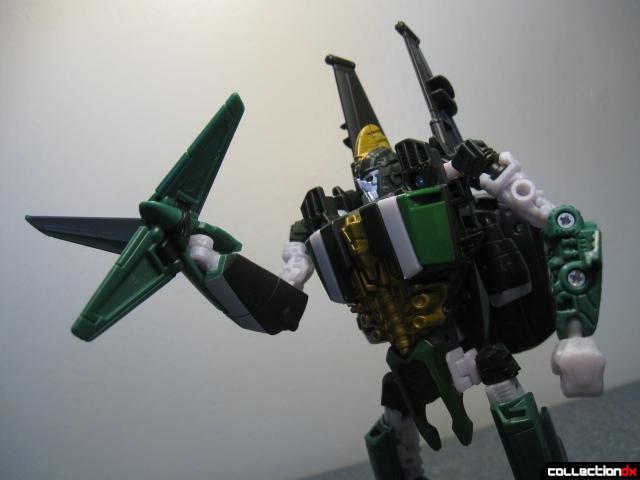 Well I should clarify that almost everything is put to good use. The tail of the airplane doesn't really do anything besides lower its horizontal fins and utterly fail at looking like a functional limb. I tend to keep it close to his body to cover up the golden details and hide this malformed appendage. 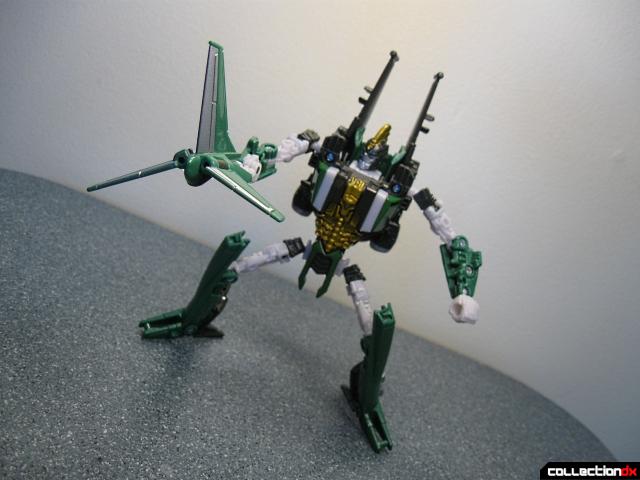 The whole assembly can extend outward on a double hinge but doesn't really look like anything other than the tail of an airplane. Maybe if the fins could arrange into some kind of three fingered claw or a solid looking scythe it might work better. 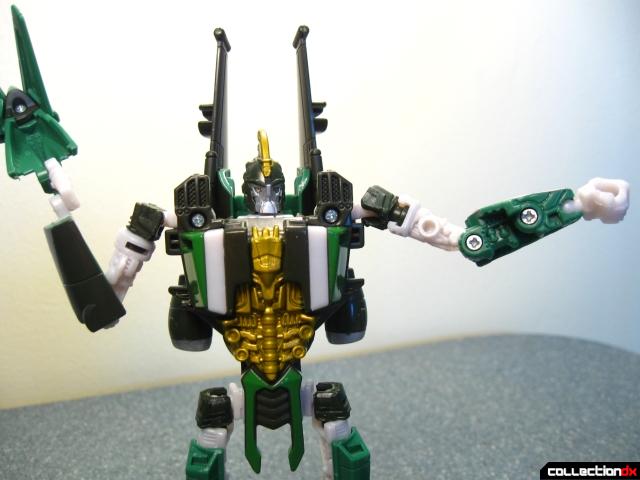 Another odd thing is if you transform Air Raid's forearms as per the instructions with the smooth side up he has much more limited elbow articulation than if you leave them hollow side up. Neither way really looks "right" but at least the latter lets Air Raid do the snake like any good plane. 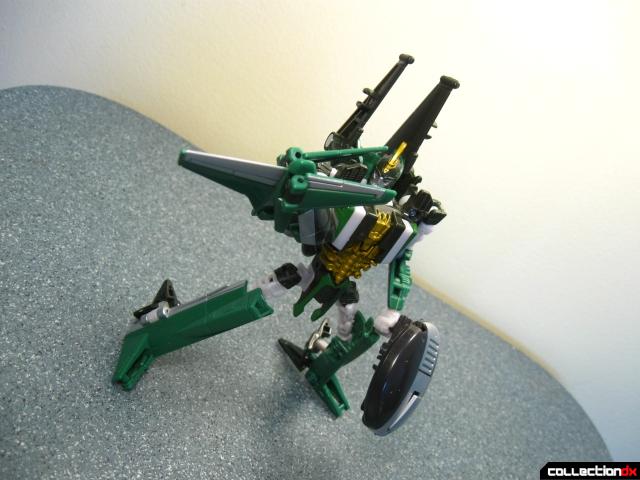 The radar disk weapon is too heavy for Air Raid to effectively wield it in gun mode. While attempting to keep the weapon in gun mode I tried everything including jamming a pen inside the weapon to no avail so Air Raid is forced to menace people with his hand tail thing. 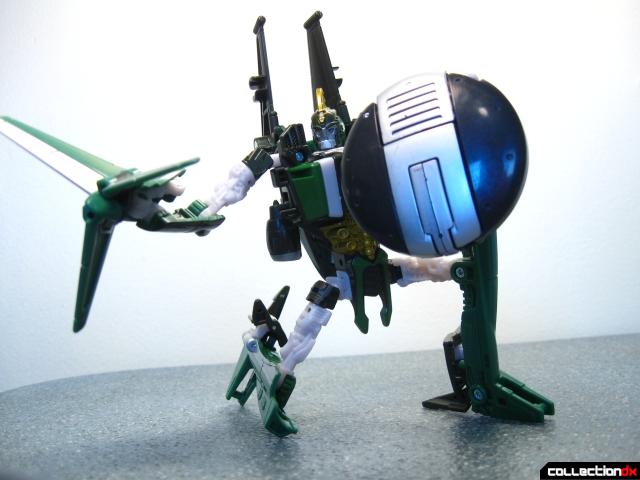 You can flip the handle down so Air Raid can hold his radar disk like a shield. I think they trying to make him look like a Roman gladiator. Sadly Air Raid falls short of a non-fortress Maximus. 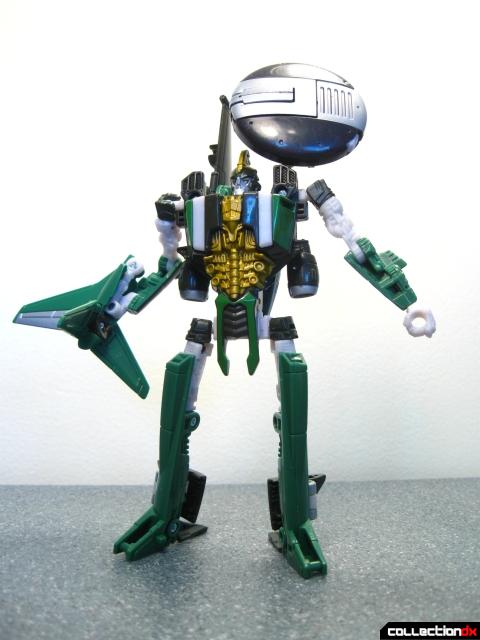 Air Raid does have a pair of 5 mm ports on his wings which let you mount his radar in a more advantageous position. Keep watching the skies! 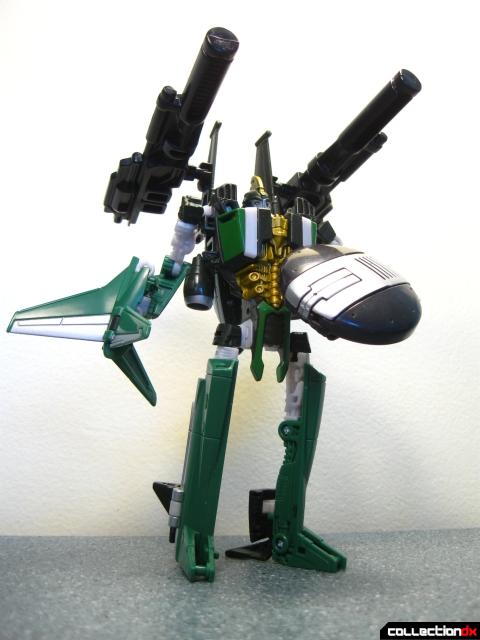 5 mm holes have been a staple of Transformers toys for so long even weapons from a Powermaster Optimus Prime can attach to Air Raid. He's gone from dustbuster to Air Guncannon! 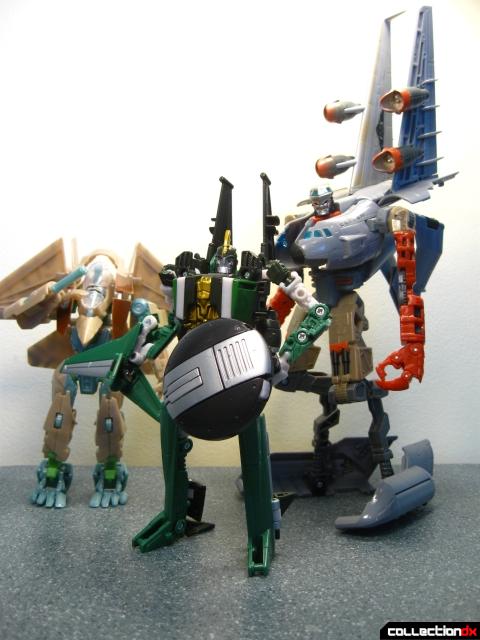 Air Raid joins his fellow movie-verse jet Transformers for a photo. These toy only guys are a pleasant bunch wouldn't you say? They don't use foul language like some other Transformers. 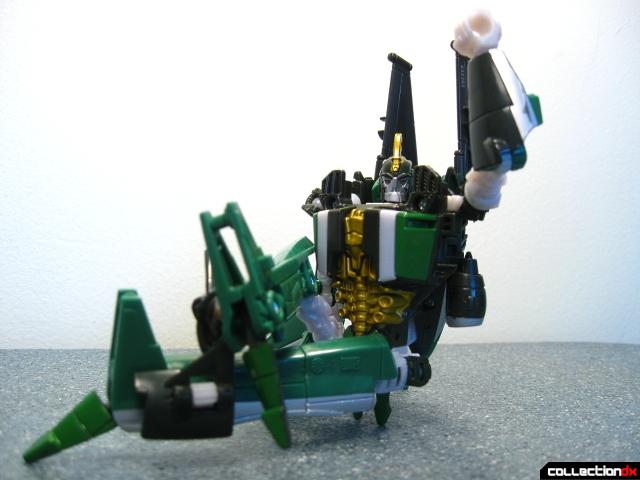 In the end Air Raid is just an alright toy. For someone with my tastes he was worth the five bucks I paid for him. I can see why the reception for him was rather lukewarm. Air Raid is a lanky looking rank and file type of Transformer whose scant few gimmicks are poorly executed. I do think the designers were pretty ambitious with him as his nifty transformation and uncommon appearance represents some of the more experimental entries of the brand. After awhile you start to wonder that with so many different aesthetics ranging from Geewun to Beast Machines to the Unicorn Trilogy, just what is the unifying "Transformers look?" Honestly I find Air Raid has much more in common with a Gobot than he does even other movie Transformers. His minimalist limbs and weird non-hand can be seen in some of the quirkier Tonka original Gobots. While not an essential figure I would still recommend Air Raid if you find him for a good price.